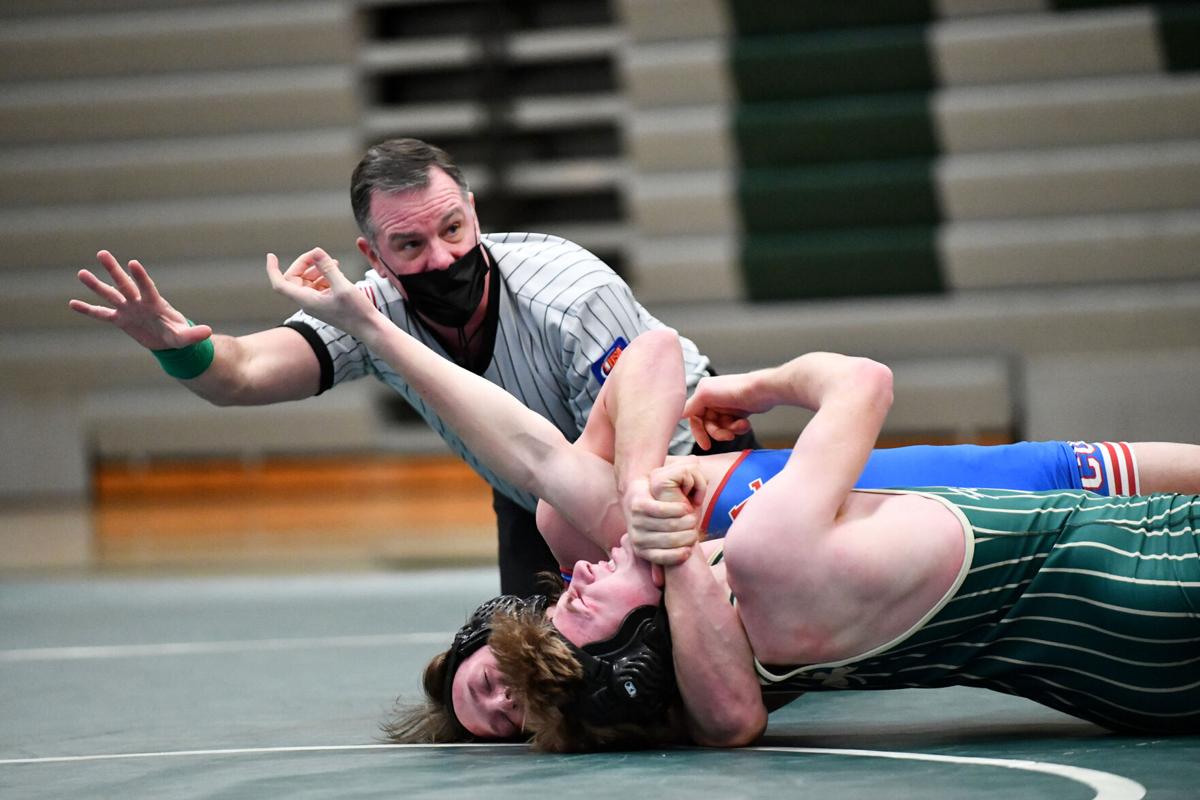 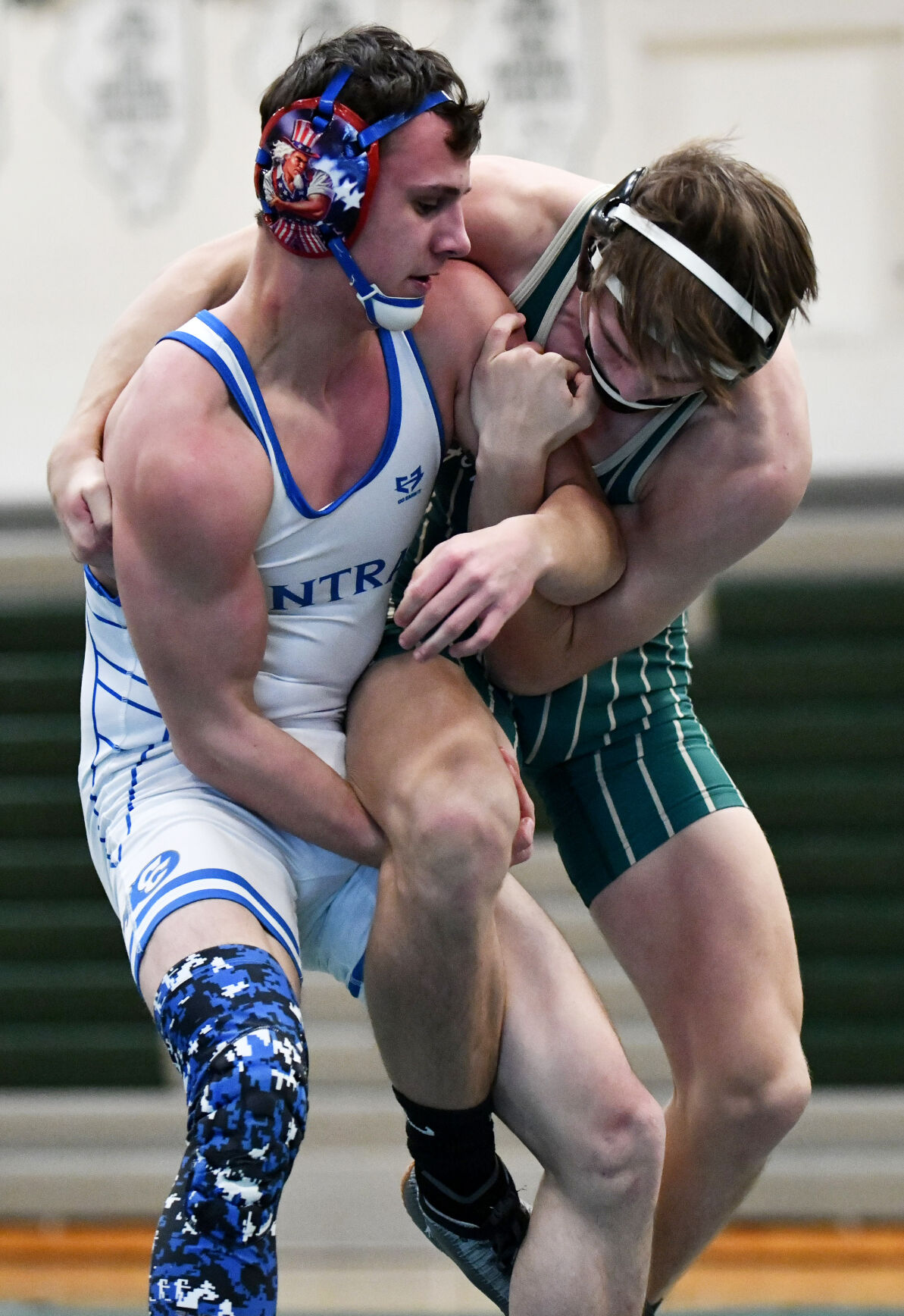 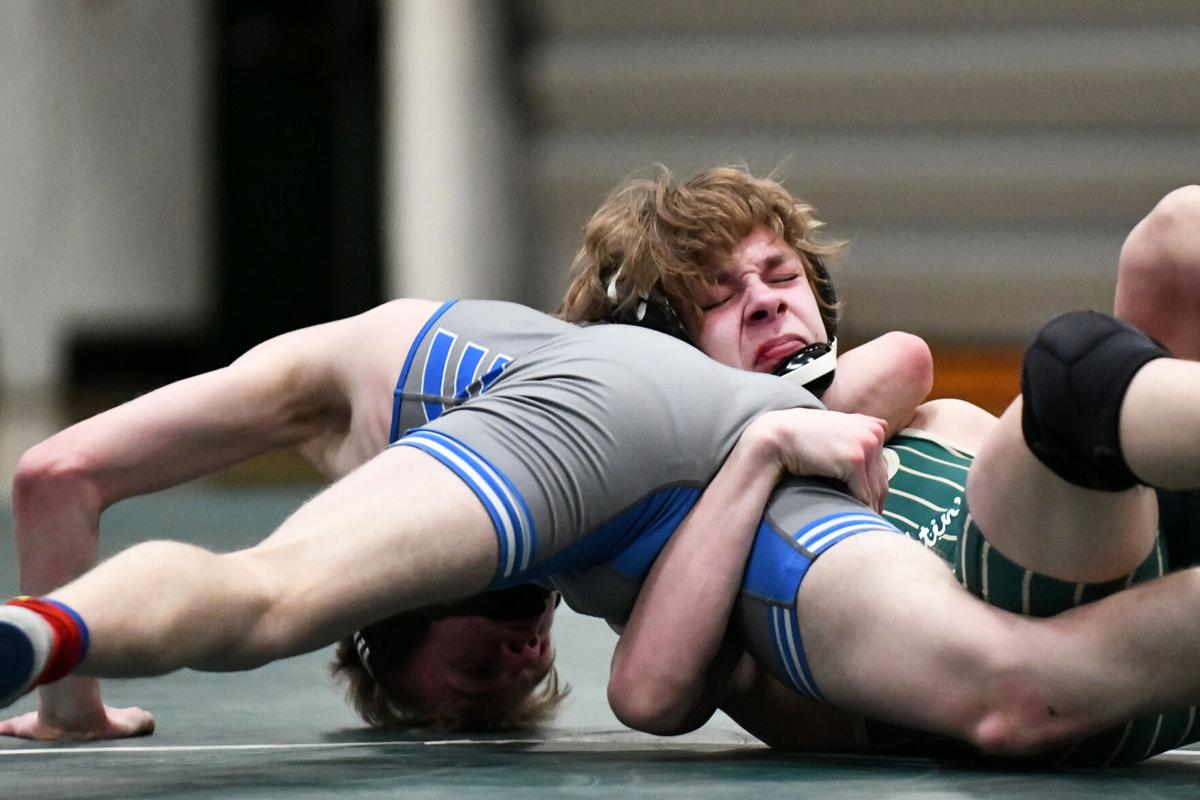 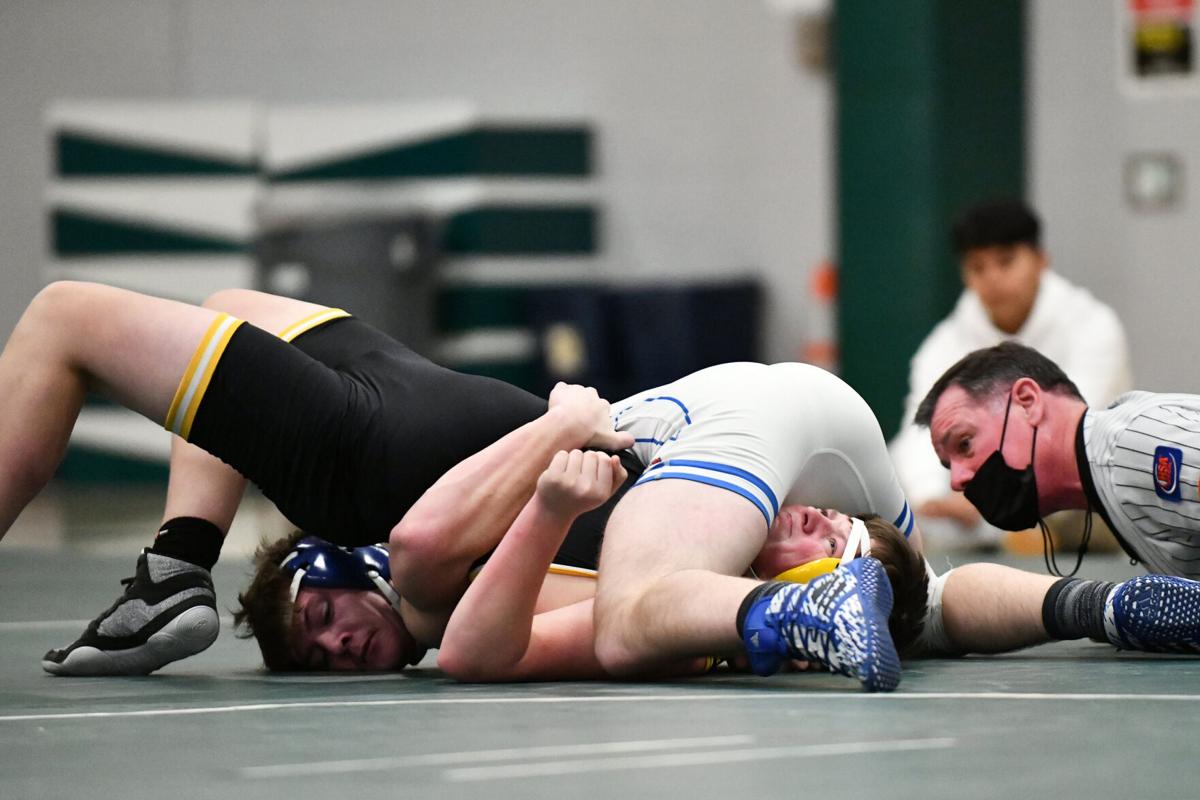 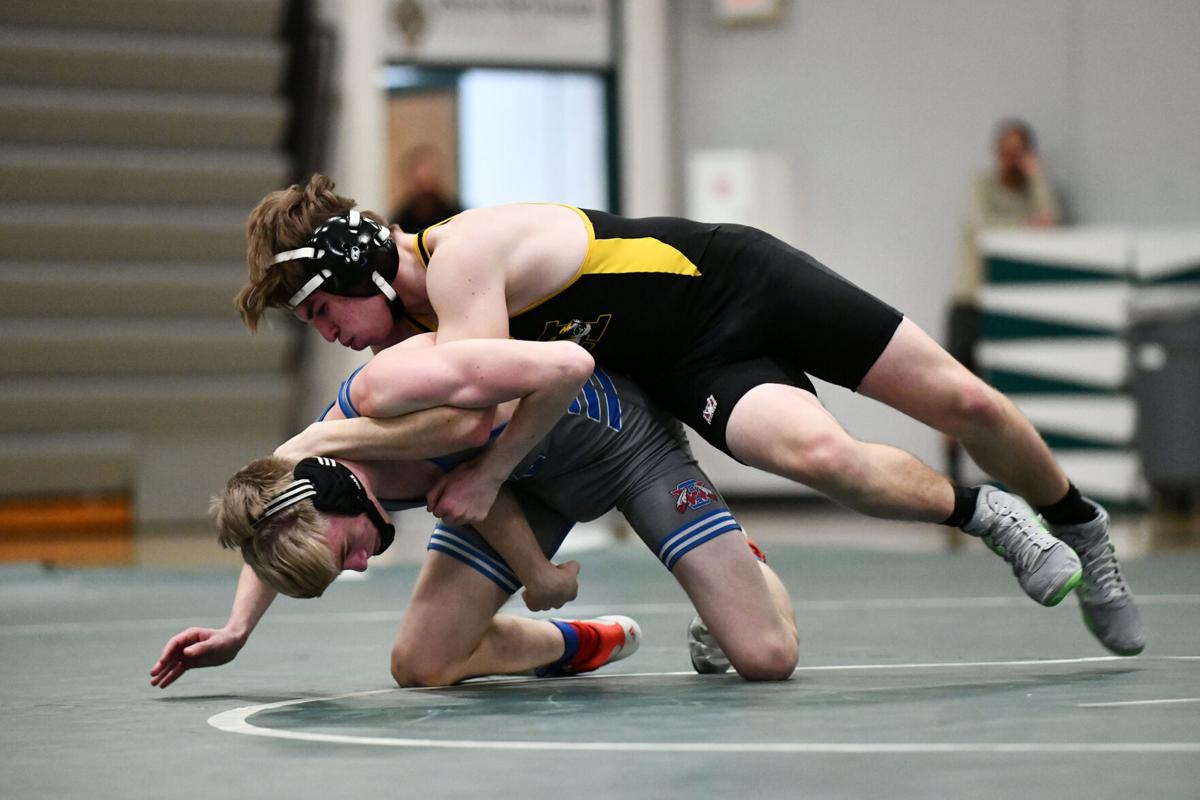 Herscher's Gerrit Osenga gets a hold on Central's Kayden Cody during Osenga's victory in the 126-pound match Tuesday at the triangular meet between Bishop McNamara, Central-Iroquois West and Herscher. READ MORE.

Herscher's Gerrit Osenga gets a hold on Central's Kayden Cody during Osenga's victory in the 126-pound match Tuesday at the triangular meet between Bishop McNamara, Central-Iroquois West and Herscher. READ MORE.

Unlike a majority of the traditional high school sports that have been able to withstand the effects of COVID-19 during their respective seasons, wrestling has taken quite a hit from the virus.

Wrestling roster sizes slowly have shrunk during the past handful of years, and that pace quickened when the pandemic began. Take Bishop McNamara’s triangular meet against Central-Iroquois West and Herscher on Tuesday evening for example.

After a 2020-21 season that saw the Irish finish with only two grapplers on the mat, McNamara hosted the meet with the Comets and Tigers with only three wrestlers on its roster.

“We have a lot less matches because of COVID-19,” Irish wrestling coach Jake Kimberlin said. “At this point in a typical season, we’d already have around 25 to 30 matches, and right now, we are just over 10.

“So, we have a lot less matches, which means we have less mat time to figure out how to do things, but in a good sense, it’s kept guys more healthy. Overall, since COVID-19, it’s been hard to get kids to come out and wrestle.”

Despite only having three wrestlers and falling to Herscher 24-17 and Central 70-6, the Irish still managed to go 4-2 in their individual matches.

McNamara’s Jack Jeck (126 pounds) and Mason Scivally (170) both picked up victories via pin in their respective matches against the Tigers, and returning state qualifier Luke Christie (160) went 2-0 to improve to 11-1 on the season by sweeping his matches with two tech falls.

“The goal is definitely to be a state champion this year, and it’s hard to be a wrestler this season, especially with COVID-19 becoming more of a problem again,” Christie said. “Wrestling at home tonight and going 2-0 felt great.”

It wasn’t just from forfeit victories either, as the Comets went 8-2 on the night in the matches they wrestled.

“My guys have really taken some steps forward in the last couple of weeks,” Comets wrestling coach Travis Williams said. “We’ve started to see some rise in the competition, but our kids have elevated their level of wrestling as well. … I’m really happy with the mentality of my kids and how they competed tonight.”

Although Williams was proud of all of his wrestler’s performances, he said he was especially pleased with the way Cody responded to his opening defeat to Herscher’s Gerrit Osenga at the 126-pound weight division. Cody bounced back from his loss by dropping down to the 120-pound division, where he out-grappled McNamara’s Jeck to finish the evening 1-1 and end the night on a victory, earning the team’s infamous chain.

“Whoever our coach believes did the best in the meet gets to wear the chain,” Cody said. “I think he gave it to me because my first match was rough, and then the second match, I came back and gave it my all and did the best I could do. I worked for it.”

Rounding out the triangular was Herscher, which finished with the least amount of actual victories, totaling just one against the Comets. The lone victory for the Tigers came from 126-pound sophomore Osenga, who secured a win via pin after taking a loss earlier in the meet.

“I just wrestled badly in my first match against McNamara, and so I just went over what I did wrong in my mind,” Osenga said. “I was thinking too much about it in the first one, and so I just attacked without thinking in my win over Central.”

Despite only picking up one individual victory, Herscher head coach Caleb Adams was pleased to see his guys get some much-needed reps after having last wrestled more than a month ago.

“We haven’t had a match in over a month, and so it’s kind of tough to come in here and face good competition,” Adams said. “All we can do is improve from here.”