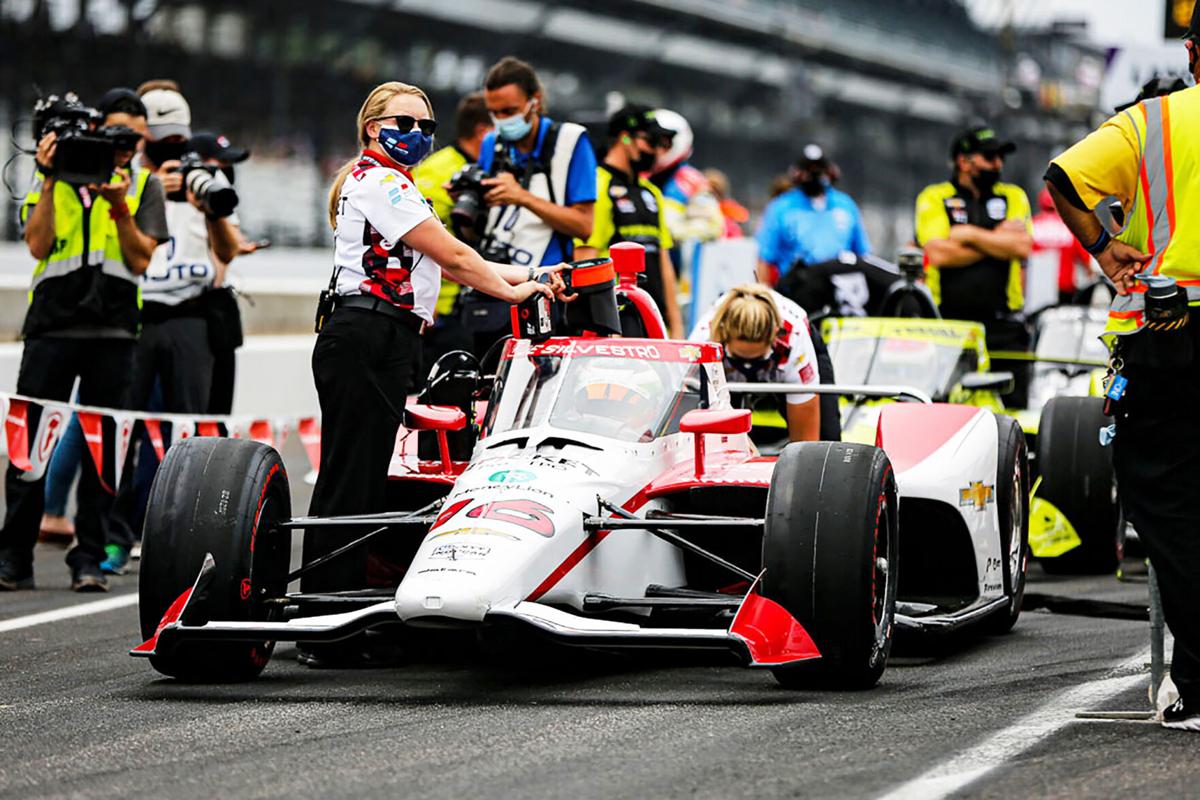 Caitlyn Brown, left, a 2017 Wilmington graduate, works on her Paretta Autosport team’s IndyCar series car at last week’s Indy 500 qualifying round at Indianapolis Motor Speedway. Brown and Paretta Autosport will make history when female driver Simona de Silvestro takes the green flag as the first-ever all-women’s pit crew in Indy 500 history. The team also is owned by a woman, Beth Paretta, and the entire team is predominantly made of women. READ MORE. 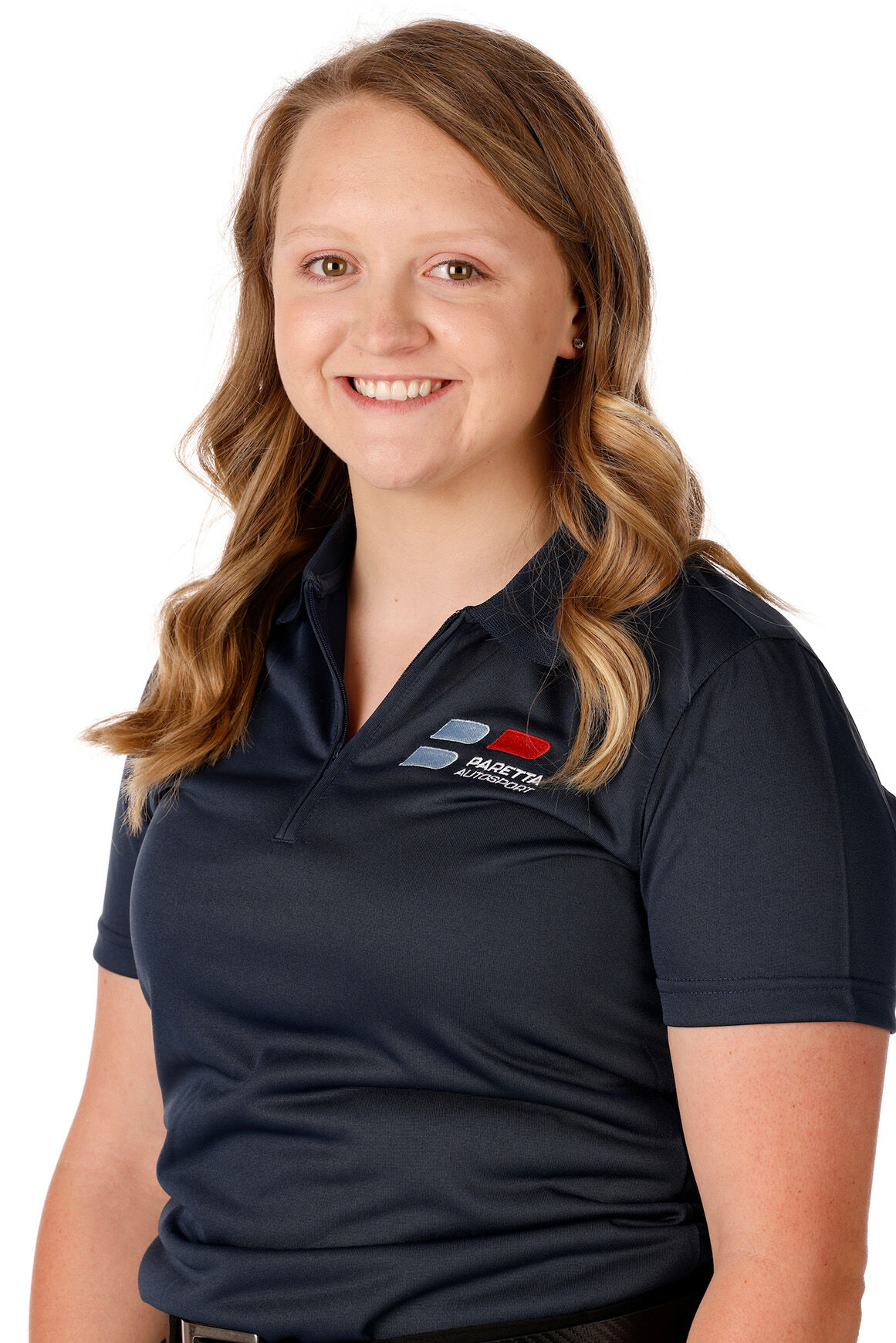 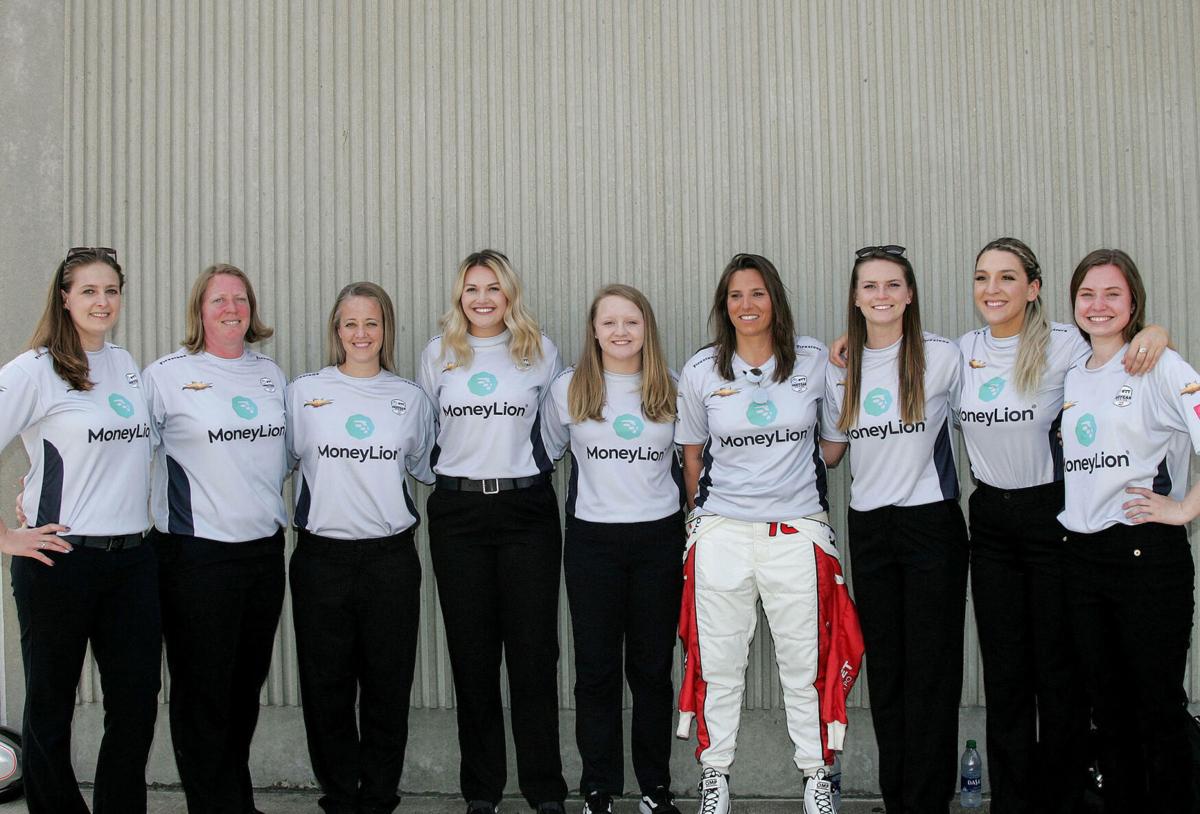 Caitlyn Brown, center, a 2017 Wilmington graduate, stands with the rest of her Paretta Autosport crew, the first-ever all-women’s crew in Indy 500 history.

Caitlyn Brown, left, a 2017 Wilmington graduate, works on her Paretta Autosport team’s IndyCar series car at last week’s Indy 500 qualifying round at Indianapolis Motor Speedway. Brown and Paretta Autosport will make history when female driver Simona de Silvestro takes the green flag as the first-ever all-women’s pit crew in Indy 500 history. The team also is owned by a woman, Beth Paretta, and the entire team is predominantly made of women. READ MORE.

Caitlyn Brown, center, a 2017 Wilmington graduate, stands with the rest of her Paretta Autosport crew, the first-ever all-women’s crew in Indy 500 history.

When the 105th running of the Indy 500, one of motorsports’ most prestigious events, takes place in Indianapolis on Sunday, the latest chapters of both auto racing and women’s empowerment will be written, and 2017 Wilmington graduate Caitlyn Brown will have prominent places in those historical notes.

Brown is a pit crew member for IndyCar’s Paretta Autosport — one of six women on the all-female crew, the first of its kind in Indy 500 history, working on a car driven by a woman, Simona de Silvestro, and owned by a woman, Beth Paretta.

A 2018 graduate of NASCAR Technical Institute in Mooresville, N.C., Brown was a member of the school’s Director’s Honors List and was also the runner-up for the Roger Penske Outstanding Student Award. A year after her graduation, Brown joined Penske’s well-renowned Team Penske, where she serves as an assembly team member.

“Growing up, I was always around racing, and my love for the sport was so strong I couldn’t imagine myself having a job that wasn’t motorsport related,” Brown said. “I enjoyed learning how to work on my race car, so I took that passion for mechanics and moved to North Carolina to try [to] build a career in racing.”

The team was launched as a part of IndyCar’s Race for Equality and Change program, which began last summer. The team predominantly is made up of women, including all pit crew members and all business crew members. Team Penske has provided support for the team as it prepares for Sunday’s historic rendition of The Greatest Spectacle in Racing.

Paretta, who has worked with Penske since 2007 and was a part of Team Penske’s 2012 NASCAR Cup Series Championship-winning team with driver Brad Keselowski, said feats such as the one she and her team are in the process of pulling off are possible because of the connection fans can make with members of the sport — a group of people more diverse now than ever before.

“Change is happening, and there is momentum; we’re able to create opportunities for women by shining the spotlight on their stories,” Paretta said at a news conference earlier this year. “Because the way people identify and feel a connection to what they see is innate, and we can’t change that, but we can change the focus, and we can shine that spotlight on the members of this team and their stories.”

De Silvestro will run her first Indy 500 since 2015 and the sixth of her career, with her best finish coming in her 2010 debut (14th). Starting in the 33rd and final spot on the grid Sunday, the biggest difference de Silvestro has seen with Team Paretta this year compared to teams she’s been on in years past is all of the members seem to be working toward the same goal.

“I think it’s [going to] be the best opportunity yet with everyone involved believing in the same goals ...” de Silvestro said at a news conference earlier this year. “I really hope along this journey we will inspire more women to follow their dreams and create more opportunities.”

Nine different women have raced in the Indy 500, but Sunday’s race will be the first time an entire team of women will stand together on the track during the opening ceremonies. If similar actions continue, although Brown always will be the first local woman to compete in the race and part of the race’s rich history, she won’t be the last.

“The idea that working hard and following your passion, if you’re open to the opportunity, your life can take turns you would have never scripted for yourself — I think that’s the end story here,” Paretta said. “The opening ceremonies of the [Indy] 500, the pageantry of the 500 is amazing. … It’s like nothing else.

“The idea of seeing a line of women with matching uniforms, you might say that’s cool, but for a 10-year-old girl watching from home, it hits differently.”

Some of the best local sports photos from early May.