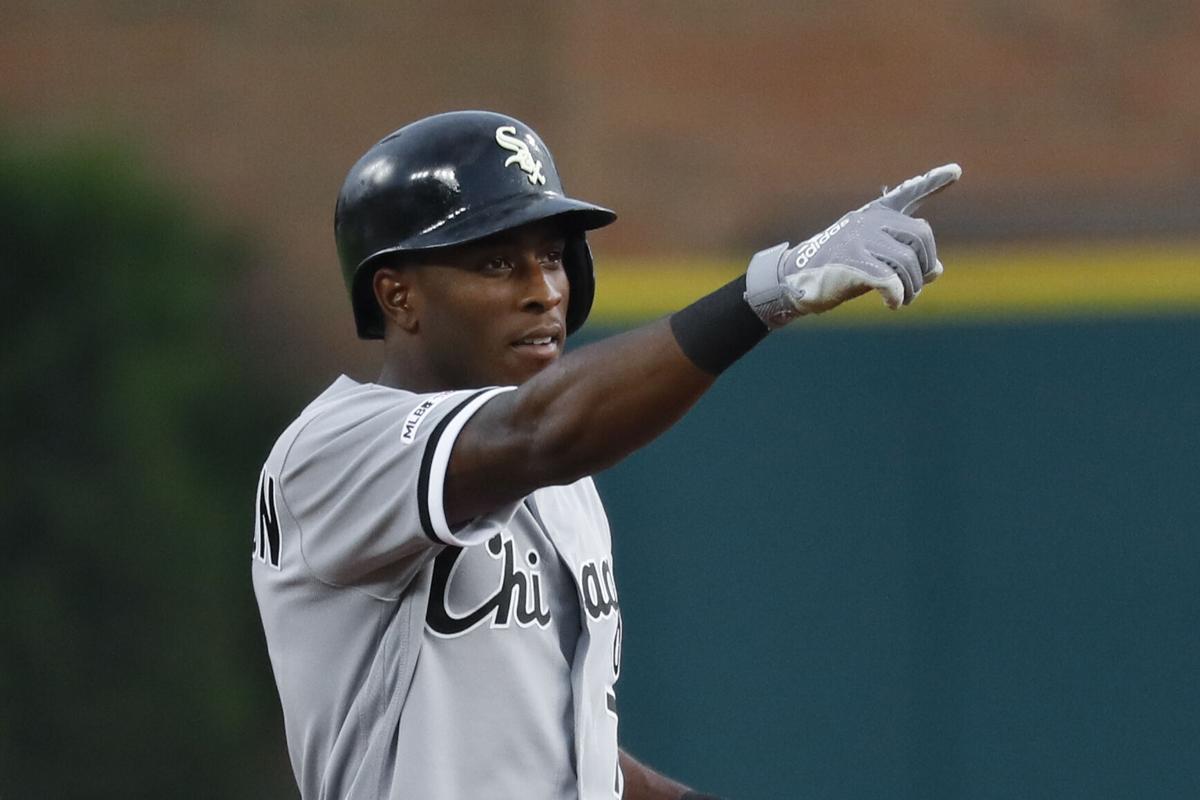 Chicago White Sox's Tim Anderson points to the dugout after hitting a double against the Detroit Tigers during the first inning of a game in Detroit on Sept. 20, 2019. Anderson led baseball in batting last season and is back once again to set the table for a strong White Sox lineup. 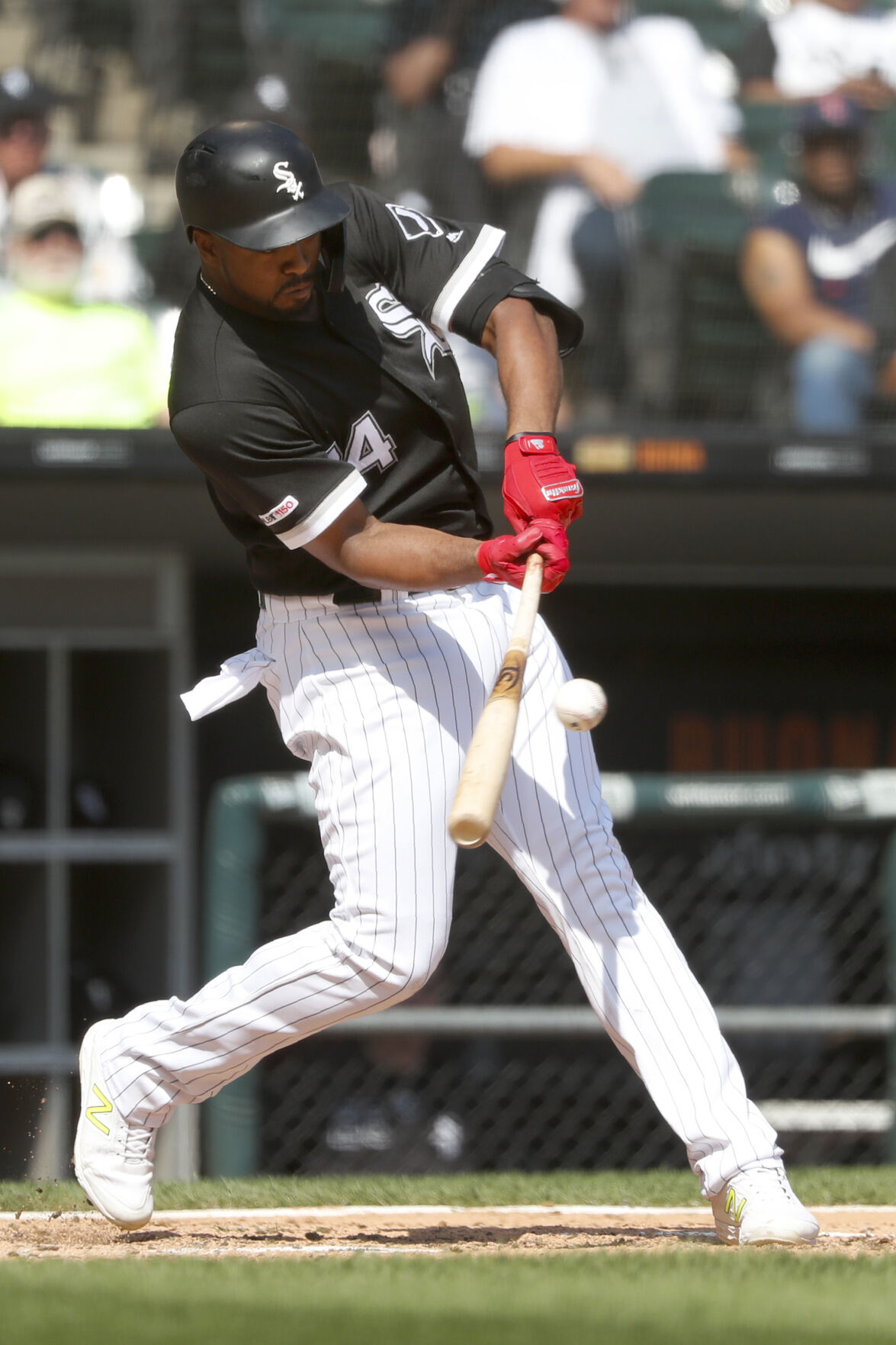 Chicago White Sox's Eloy Jimenez hits an RBI single off Kansas City Royals starting pitcher Jorge Lopez during the third inning of a game Sept. 12, 2019, in Chicago. Jimenez was one of the top rookies in baseball last season and will hope to build off of his 31-home run 2019 season with an impressive year in 2020.

Chicago White Sox's Tim Anderson points to the dugout after hitting a double against the Detroit Tigers during the first inning of a game in Detroit on Sept. 20, 2019. Anderson led baseball in batting last season and is back once again to set the table for a strong White Sox lineup.

Chicago White Sox's Eloy Jimenez hits an RBI single off Kansas City Royals starting pitcher Jorge Lopez during the third inning of a game Sept. 12, 2019, in Chicago. Jimenez was one of the top rookies in baseball last season and will hope to build off of his 31-home run 2019 season with an impressive year in 2020.

I’ve been told by my parents since I can remember the reason I love baseball so much is because I was born on Opening Day. Is there really anything better than the start of the baseball season?

Spring air begins to tickle the atmosphere (and the noses of my fellow allergy sufferers), and 30 clubs, for at least a day, have an equal chance at being the best in baseball for the season that’s ahead. The start of the baseball season introduces us to the spring the same way football sets the stage for the fall.

That’s a little different this year, as Major League Baseball opens the season Thursday, smack dab in the heat of the summer. Stadiums are void of fans, but the fields still will be filled with action.

Whichever side of Chicago your baseball alliance falls, you have reason for excitement for the 60-game season. The established Cubs are ready to rebound under first-year manager David Ross, and the White Sox boast some of baseball’s best in the next wave of upcoming talent.

The two Chicago squads faced off in the 1906 World Series, one the Southsiders won. Neither team is the favorite in the sports books to win a pennant — the respective front-runners are the New York Yankees and Los Angeles Dodgers — but both teams in the Windy City certainly have legitimate postseason aspirations. During the next two days, I will look at what to watch for from each team in Chicago, starting today with the White Sox.

They might be a year away from being true contenders, especially with a shortened season this year, but the Sox, one of the most fun and young teams in baseball last year, have even more talented youth at their disposal in 2020.

Reigning MLB batting champion Tim Anderson is one of the most underappreciated shortstops in the game, and he’s just the table starter for manager Rick Renteria.

Eloy Jimenez already has shown in summer camp he once again is ready to obliterate baseballs after socking 31 dingers during his rookie season last year. He caught fire as the year went on and saw his batting average climb to .267 after being in the .240s for most of the season. If that average continues to rise and the homers continue to fly, Jimenez will be an MVP candidate sooner than later.

He probably is not even the most exciting prospect in the outfield. Luis Robert, MLB.com’s third-ranked prospect in the sport, received a rare, multi-million dollar contract extension before playing a big league game, and that’s because the White Sox know they have their own version of Ronald Acuña Jr. on their hands.

Robert is a five-tool centerfielder who can hit anywhere in the lineup, and his versatility is welcomed in a lineup that features sluggers such as Jimenez, Edwin Encarnacion, Jose Abreu and all-around phenom Yoan Moncada. Add in prized catcher Yasmani Grandal, the Sox’s premier free-agent acquisition, and pieces such as Nomar Mazara and promising second baseman Nick Madrigal, and suddenly the White Sox have a fearsome lineup.

The pitching staff is anchored by all-star Lucas Giolito, and a pair of southpaw free agents, Dallas Keuchel and Gio Gonzalez, give experience to a young rotation that also will include young bullets such as Reynaldo Lopez and Dylan Cease. If Carlos Rodon can return strong from Tommy John surgery and Cease and Lopez continue to develop, the Sox could have their deepest rotation since their 2005 World Series run.

The bullpen isn’t the best in baseball, but it certainly is not the worst. Aaron Bummer cemented himself as one of the best left-handed relievers in the American League in 2019, and his role of coming in and slamming the door shut to set up closer Alex Colome will continue.

Colome isn’t a perennial all-star, but he certainly is above-average at closing out games. Bummer is joined by fellow southpaw Jace Fry to give the team two reliable lefties. Steve Cishek and Kelvin Herrera also are back from the right side. Cishek picked up a few spot saves and is great at bridging the gap from starter to closer, and Herrera, who struggled with a 6.14 earned run average last year, will hope to return to his old form that saw him nab a pair of all-star selections.

In a season that is anything but normal, veteran acquisitions such as Grandal, Encarnacion, Mazara, Keuchel and Gonzalez will be more pivotal than ever on the talented young core the Sox have them paired with. That blend is common in recent championship DNAs, such as the 2016 Cubs and 2017 Houston Astros. If a pennant doesn’t return to 35th & Shields this fall, it won’t be long before it does.