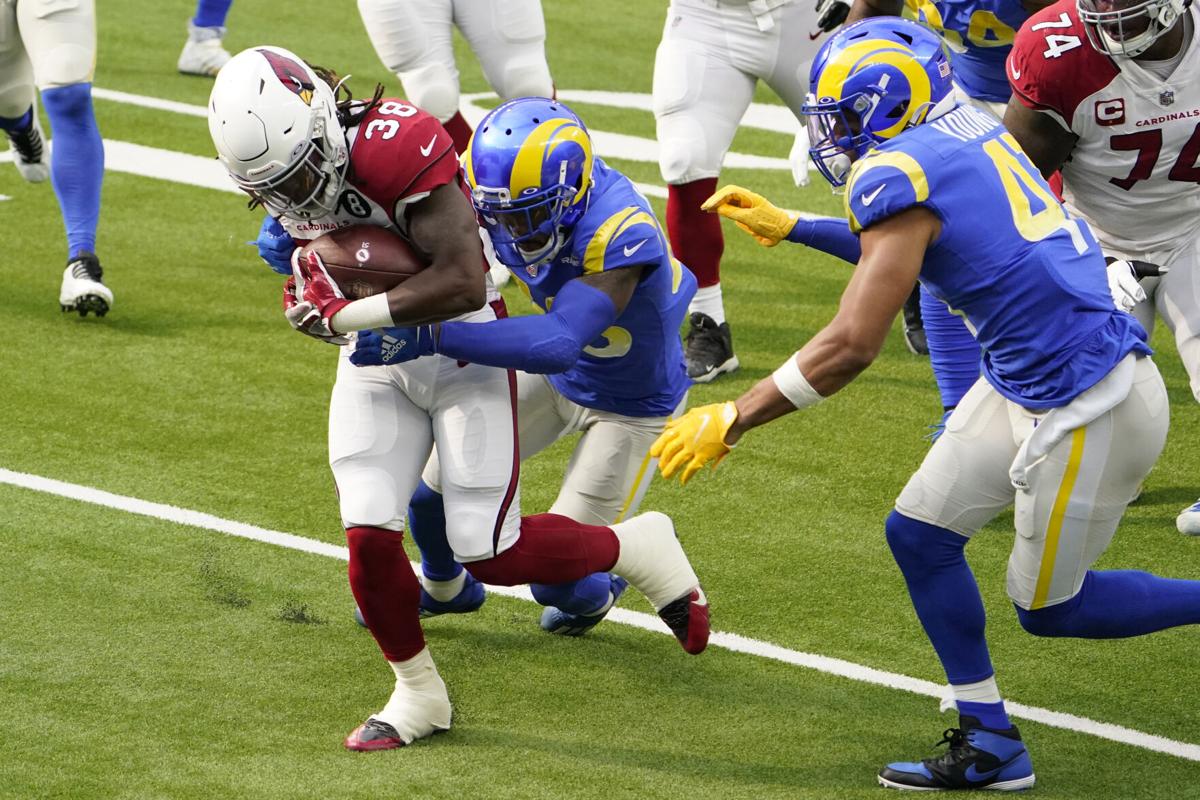 Arizona Cardinals running back Jonathan Ward (38) runs toward the end zone to score against Los Angeles Rams free safety John Johnson III during the first half of an NFL football game in Inglewood, Calif., Sunday. Ward, a 2016 Bishop McNamara graduate, scored his first career touchdown on the play. 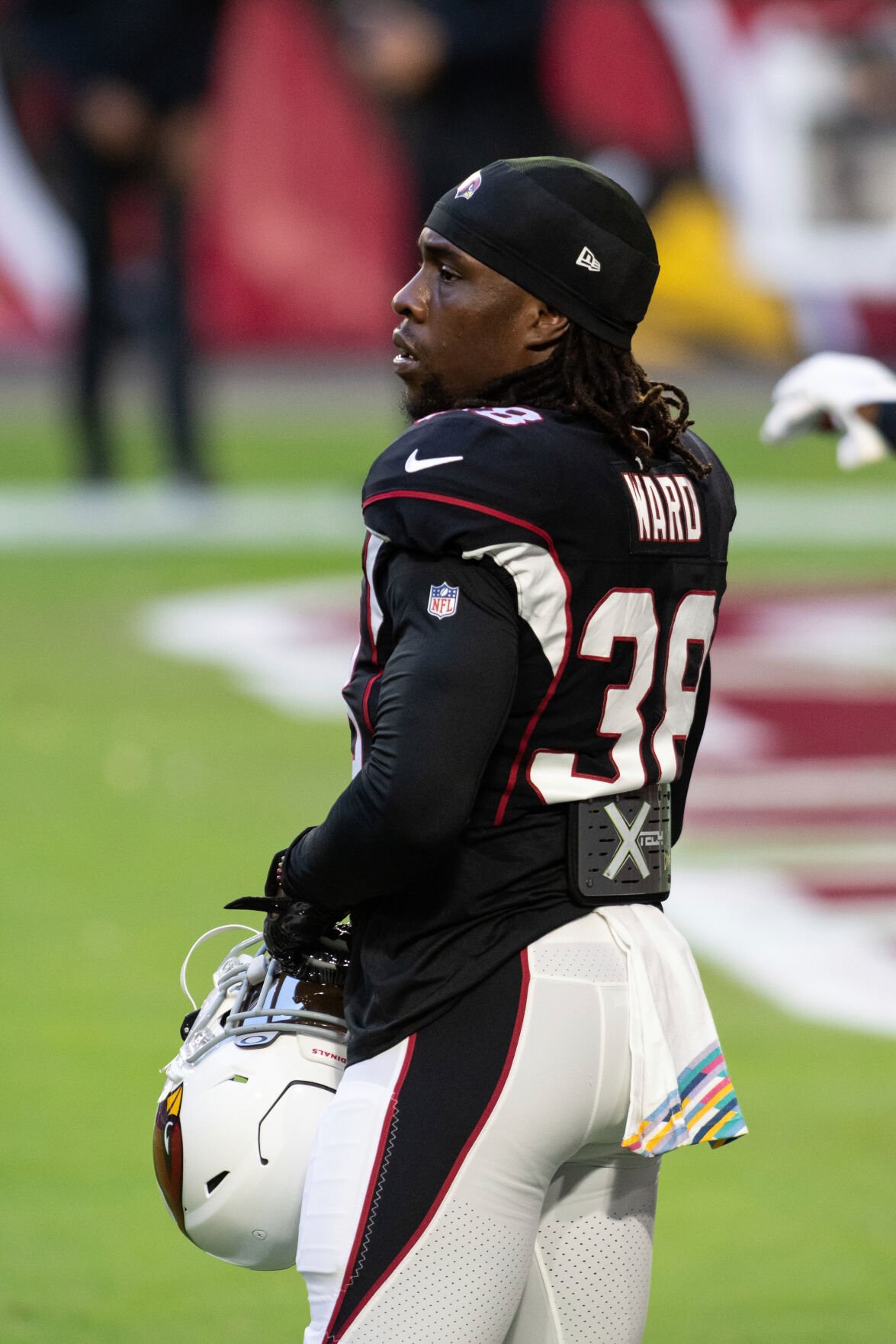 Arizona Cardinals running back Jonathan Ward warms up prior to an NFL football game against the Seattle Seahawks on Oct. 25, in Glendale, Ariz. 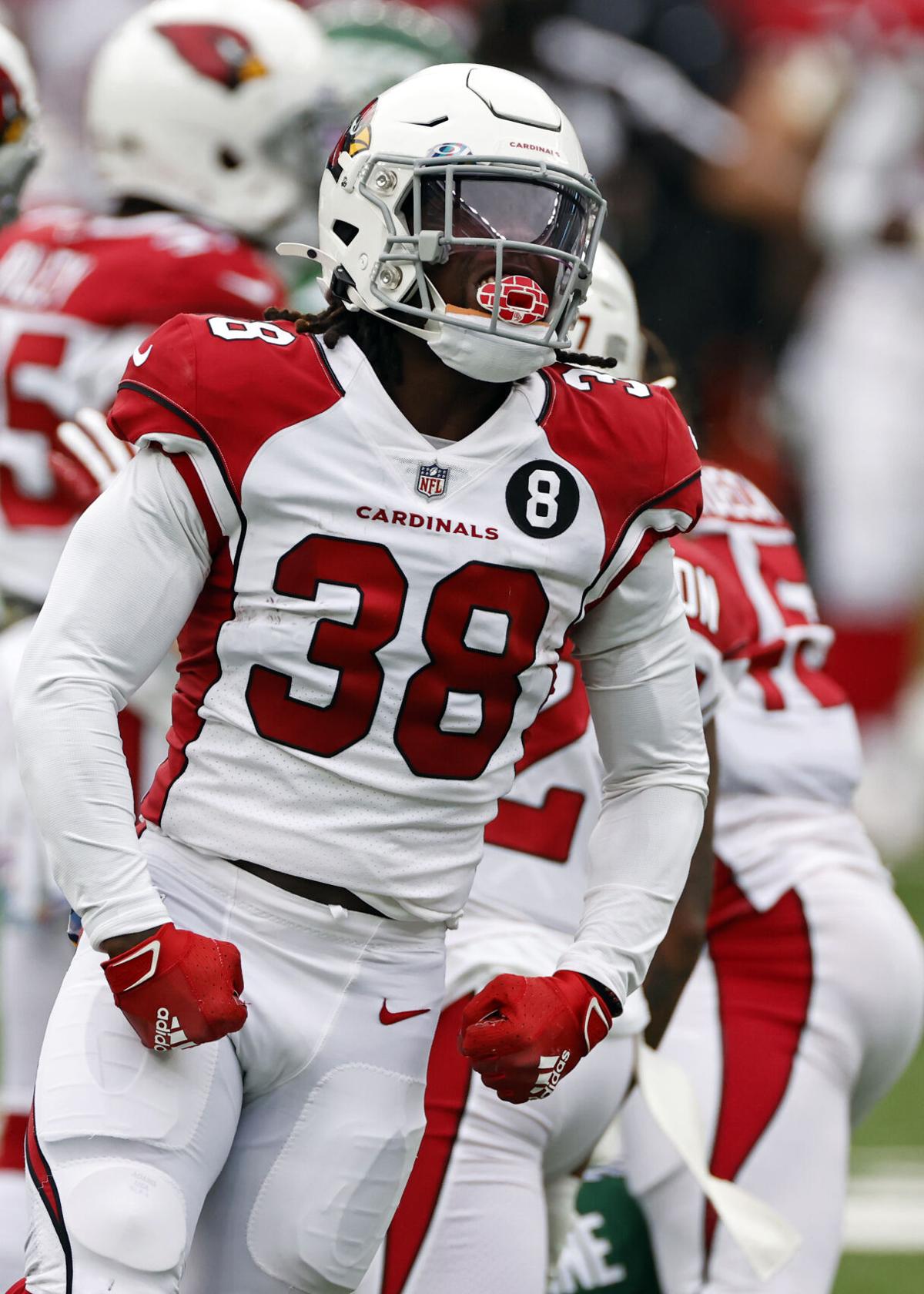 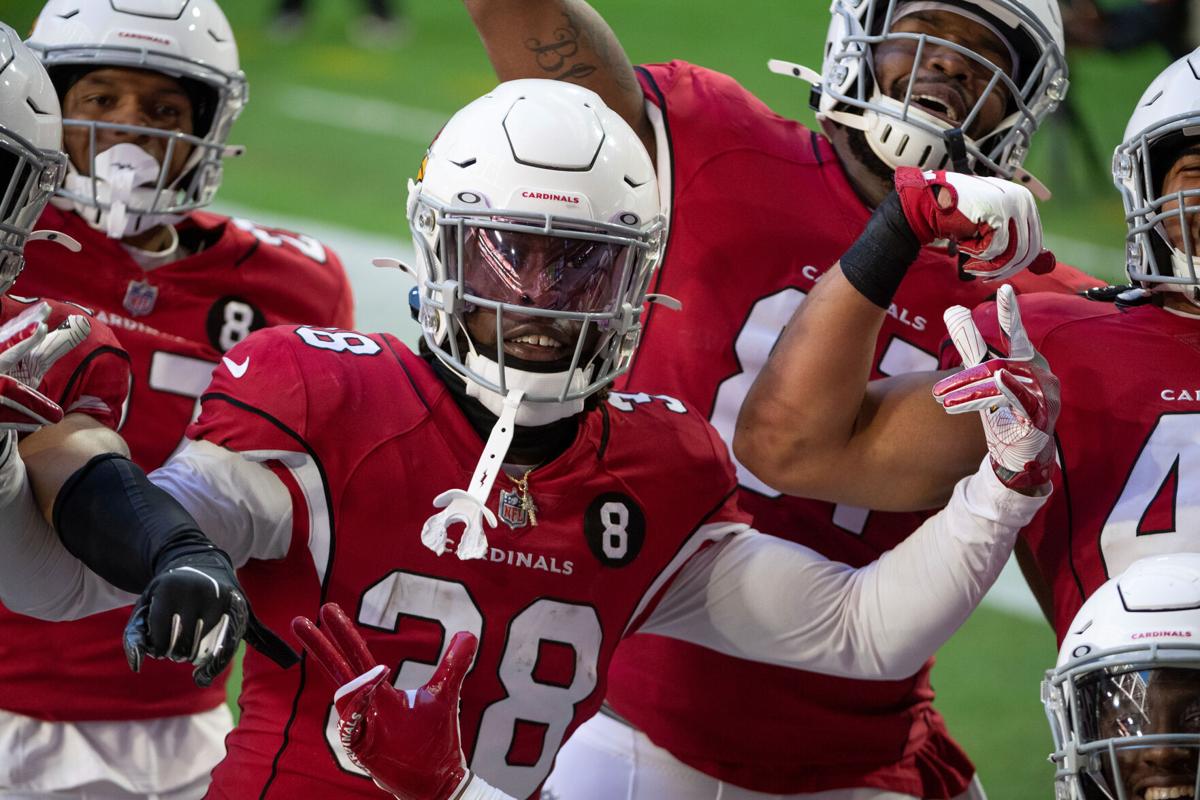 Arizona Cardinals running back Jonathan Ward (38) celebrates a play with teammates during an NFL football game against the Philadelphia Eagles on Dec. 20, 2020, in Glendale, Ariz. 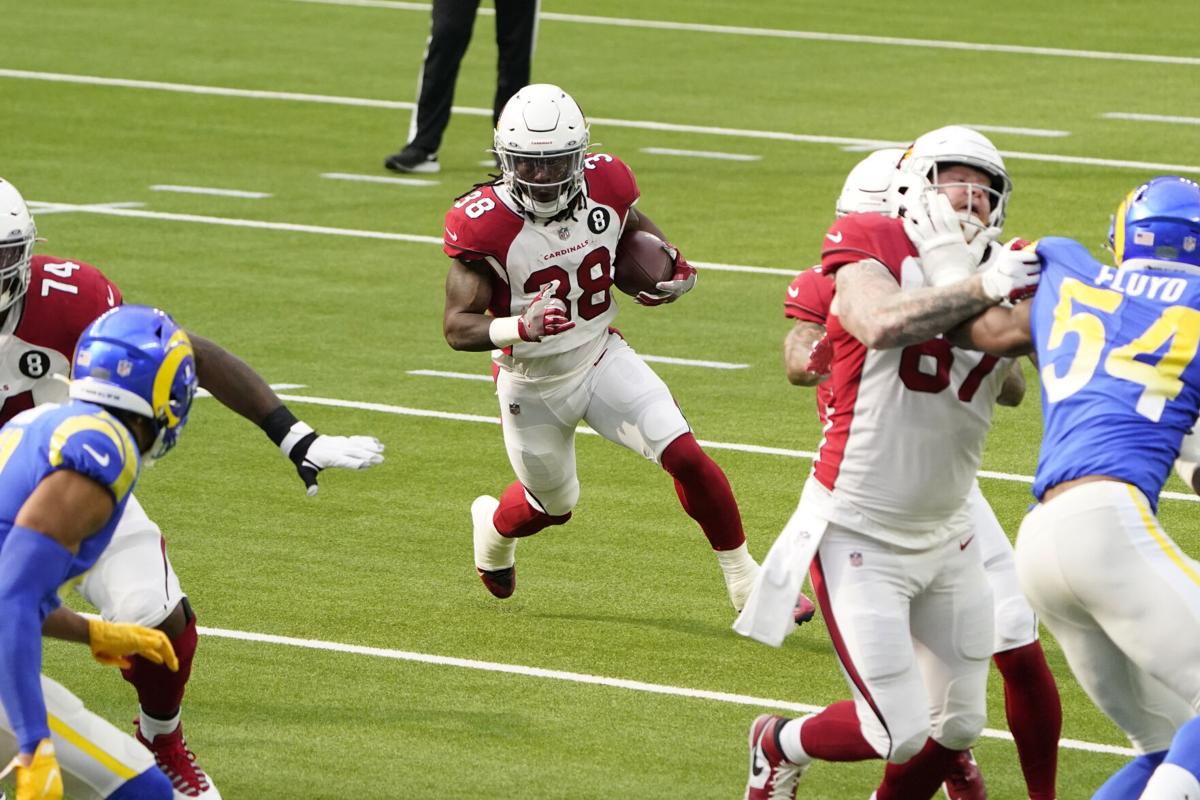 Arizona Cardinals running back Jonathan Ward runs against the Los Angeles Rams during the first half Sunday, Jan. 3, in Inglewood, Calif.

Arizona Cardinals running back Jonathan Ward (38) runs toward the end zone to score against Los Angeles Rams free safety John Johnson III during the first half of an NFL football game in Inglewood, Calif., Sunday. Ward, a 2016 Bishop McNamara graduate, scored his first career touchdown on the play.

Arizona Cardinals running back Jonathan Ward warms up prior to an NFL football game against the Seattle Seahawks on Oct. 25, in Glendale, Ariz.

Arizona Cardinals running back Jonathan Ward (38) celebrates a play with teammates during an NFL football game against the Philadelphia Eagles on Dec. 20, 2020, in Glendale, Ariz.

Arizona Cardinals running back Jonathan Ward runs against the Los Angeles Rams during the first half Sunday, Jan. 3, in Inglewood, Calif.

Over the past decade, that’s a sentence that’s been uttered during the football season with a familiar frequency. Except Ward’s last score came as an Arizona Cardinal in NFL competition, a rewarding way to end the season for an undrafted rookie who began the season on the team’s practice squad.

Ward’s touchdown came in the Cardinals’ season finale, an 18-7 loss against the Los Angeles Rams. It was an 11-yard touchdown on a jet sweep and also Ward’s first career touch after a season playing primarily on special teams.

“Once I crossed the endzone I didn’t even realize I had scored — I mean, I knew I had scored, but it all happened so fast,” Ward said. “Everyone was running up to me, congratulating me, but I didn’t realize what I had done until the next day.”

Ward has been a star on the gridiron since he became one of the best running backs the area has ever seen, graduating from Bishop McNamara in 2016 after putting himself atop every rushing record at the school. After a career at Central Michigan University in which he ran for more than 2,500 yards, Ward signed with the Cardinals after going undrafted last April.

In August, Ward officially began his professional career with training camp. It was anything but certain that he would be given an opportunity after coming in undrafted, but the Cardinals liked what they saw out of Ward enough to sign him to the team’s practice squad to start the year.

“It was a mind-boggling experience but I was just taking it one day at a time,” Ward said of his first camp. “I looked at every day I was there as another opportunity to show what I’ve got.

“Some people get cut before they step on the field, so I was just grateful to showcase everyday and prove that I belong.”

Ward stayed off the active roster and on the practice squad for two weeks, but by the time the Cardinals hosted Detroit in Week 3, the former McNamara star became the latest from the area to officially make the professional ranks, after he was signed to the team’s active roster and made his debut.

“I wasn’t trying to get too high or too low; it was just another milestone in what I want to accomplish and reach my ultimate goal,” Ward said. “I was just doing my job and knew if I did it well in Week 3, I’d be there in Week 4, and that’s just how I carried myself.

“It was nothing different that I was doing when I was four [years old], just on a new platform and in new colors.”

Primarily playing special teams, which is comprised of punts and kicks, Ward knew his opportunity to make his mark wouldn’t initially come with the glitz and glammer of toting the rock. But that didn’t stop him from putting his best foot forward on the punt team the same way he does when making his first cut out of the backfield.

“Some guys don’t like it but I refused to let my pride be the reason I didn’t accomplish the goals I’ve set for myself,” Ward said. “I’ve never been bigger than the team on any level, so if that’s what took to get that opportunity I was gonna do it at the highest level I could ... I’d run down and play special teams for 20 years if I could.”

After two games, Ward was signed to the active roster permanently and saw double-digit snaps all but twice on special teams. He said that teammate Charles Washington, a four-year pro who also found his way into the NFL as an undrafted free agent who carved his path to the league through special teams play.

“He took me under his wing and showed me the ins and outs and the preparation it takes week in and week out to stay in the league,” Ward said of Washington. “He taught me the keys to being a better player on special teams — everyone in this league is talented, so you’ve gotta take it to a different level mentally.”

Ward also learned lessons about financial longevity and other wisdom from 17-year veteran and future hall-of-fame wide receiver Larry Fitzgerald. He was a witness to the coming out party for quarterback Kyler Murray, whose dual-threat abilities have made him a face of the NFL. And he also found himself a member of a Cardinals team that was in the postseason hunt until the end of the regular season, as the team finished 8-8 and were beat on a tiebreaker by the Chicago Bears for the final wild card spot in the NFC.

“Every guy [in the NFL] wants to make their organization better because when the organization does well [and makes the playoffs], you still get paid another week and are able to provide for your family for another week,” Ward said. “Everyone knows this league isn’t for long, so you’ve gotta make the most of it and guys fight like crazy to show that they deserve another week after the regular season.”

Most of Ward’s rookie season — including the finale he scored his touchdown in — were played in empty stadiums due to COVID-19. Ward said that the lack of fans in the stands likely impacted some NFL games this season.

“You get a lot of energy out of fans and they play a big role in the game, whether that’s positive or negative or if you’re home or away,” Ward said. “It was very different with it being so mellow and not having that 12th player.”

Ward had more fans at his youth sports games than he did when he scored his first NFL touchdown, the final points the Cardinals scored on the season and a perfect metaphor for Ward to show that hard work pays off, capping off a year that took him from an undrafted free agent to a running back entering the postseason with momentum behind his name.

And all it took was an opporunity to show himself.

“The message isn’t subliminal, the proof is in the pudding — if you put in the work, [the opportunity] may not come at first in the form that you want it but it will be there when you need it to be,” Ward said. “Whether big or little, it’s one you didn’t have before so just make the most of it.”