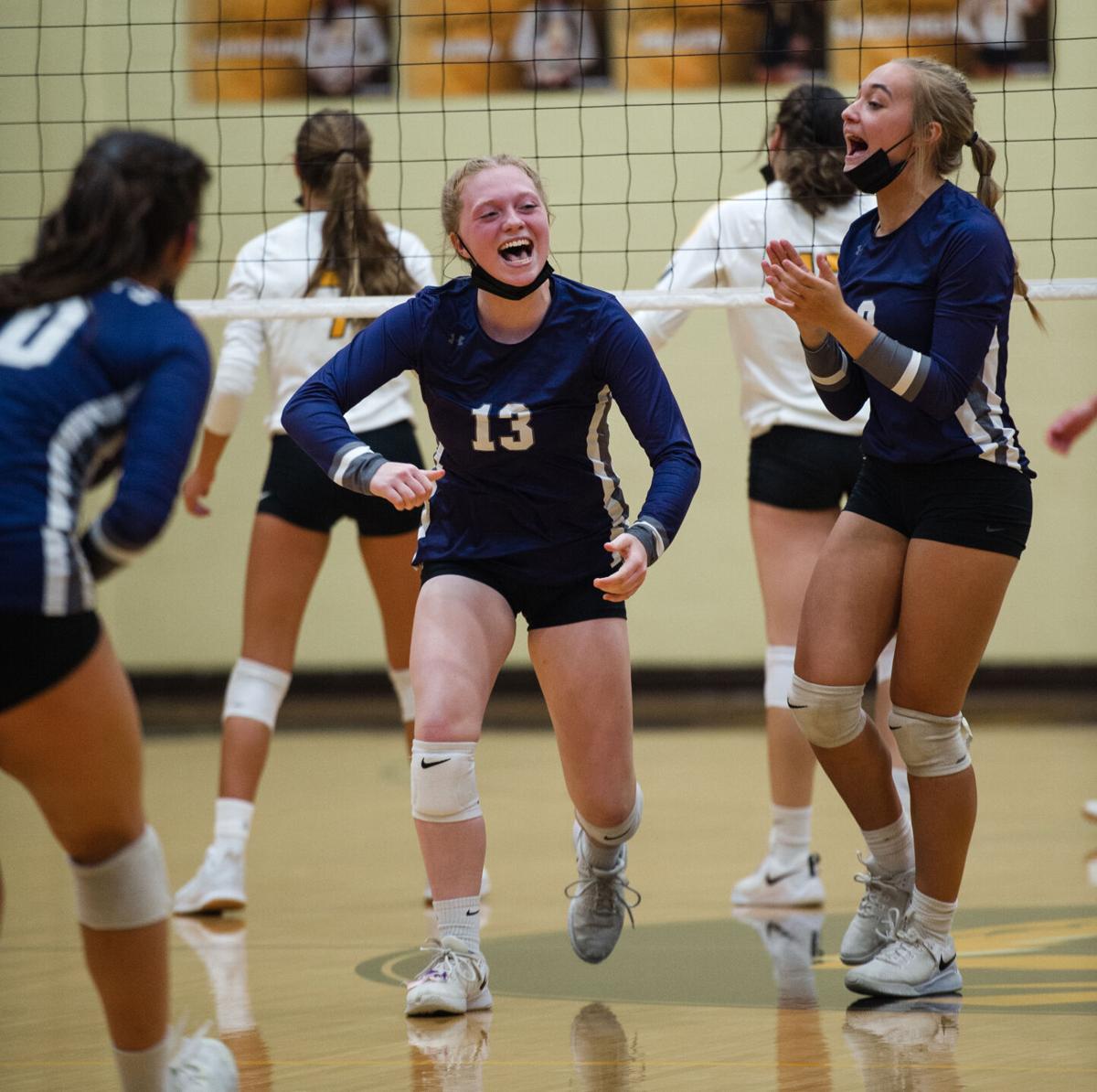 Wilmington High School’s Jenna Jackson, center left, celebrates a point over Herscher High School in Thursday’s matchup in Herscher. The Wildcats lost the first set before coming back for a 2-1 victory. 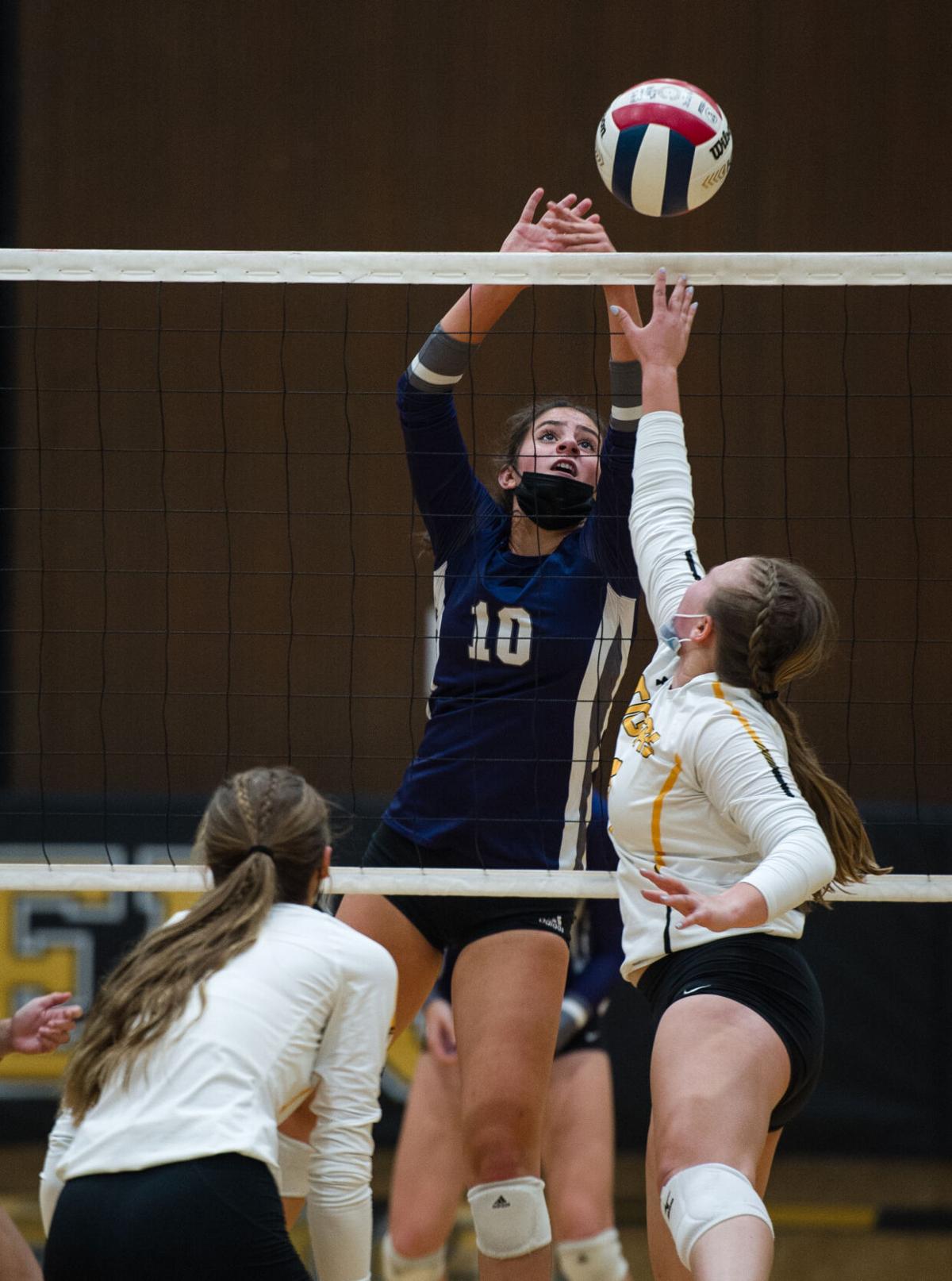 Wilmington High School’s Bella Reyes and Herscher High School’s Ally Meyer meet at the net to try and tip the ball in their favor during Thursday’s matchup. in Herscher. 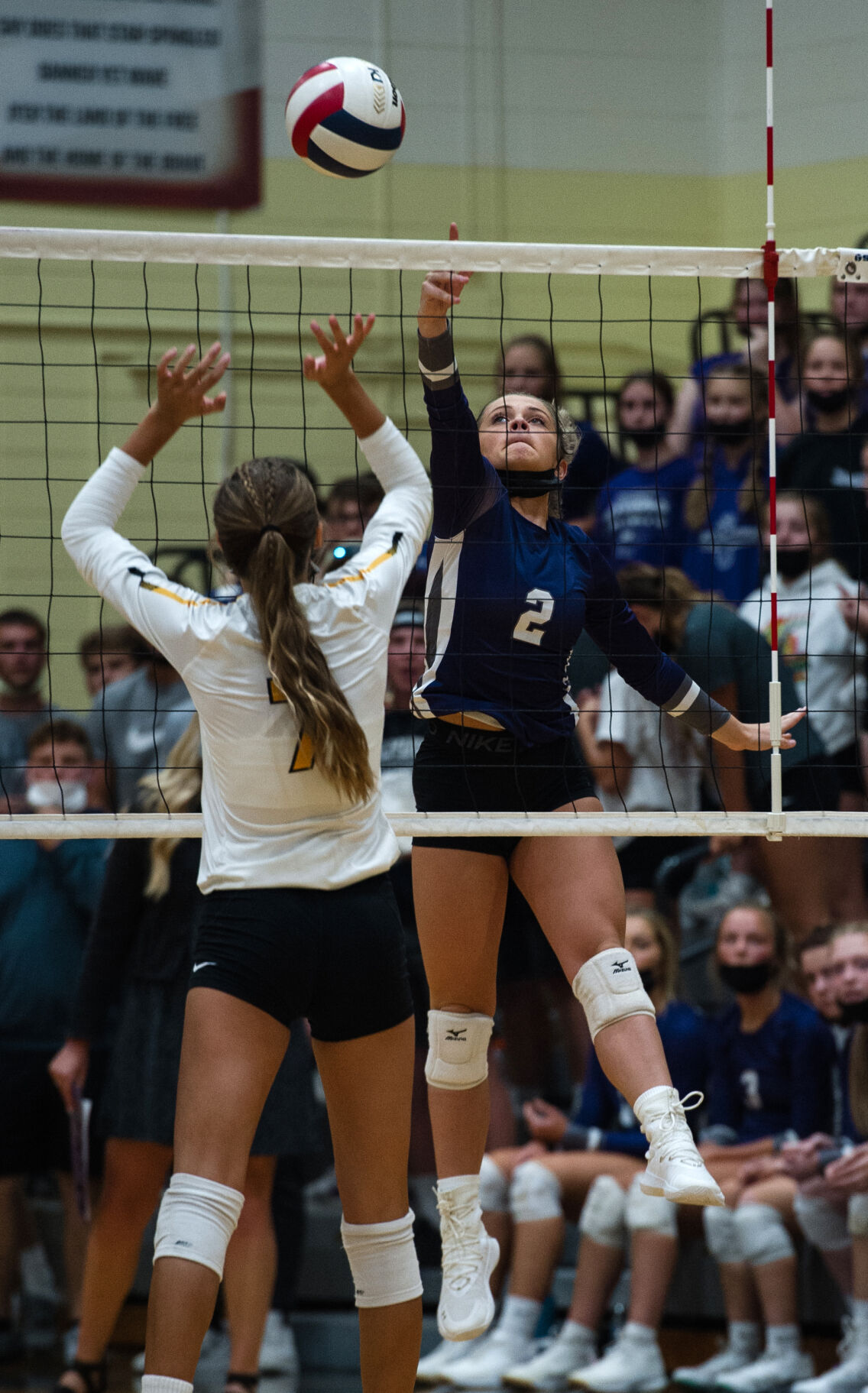 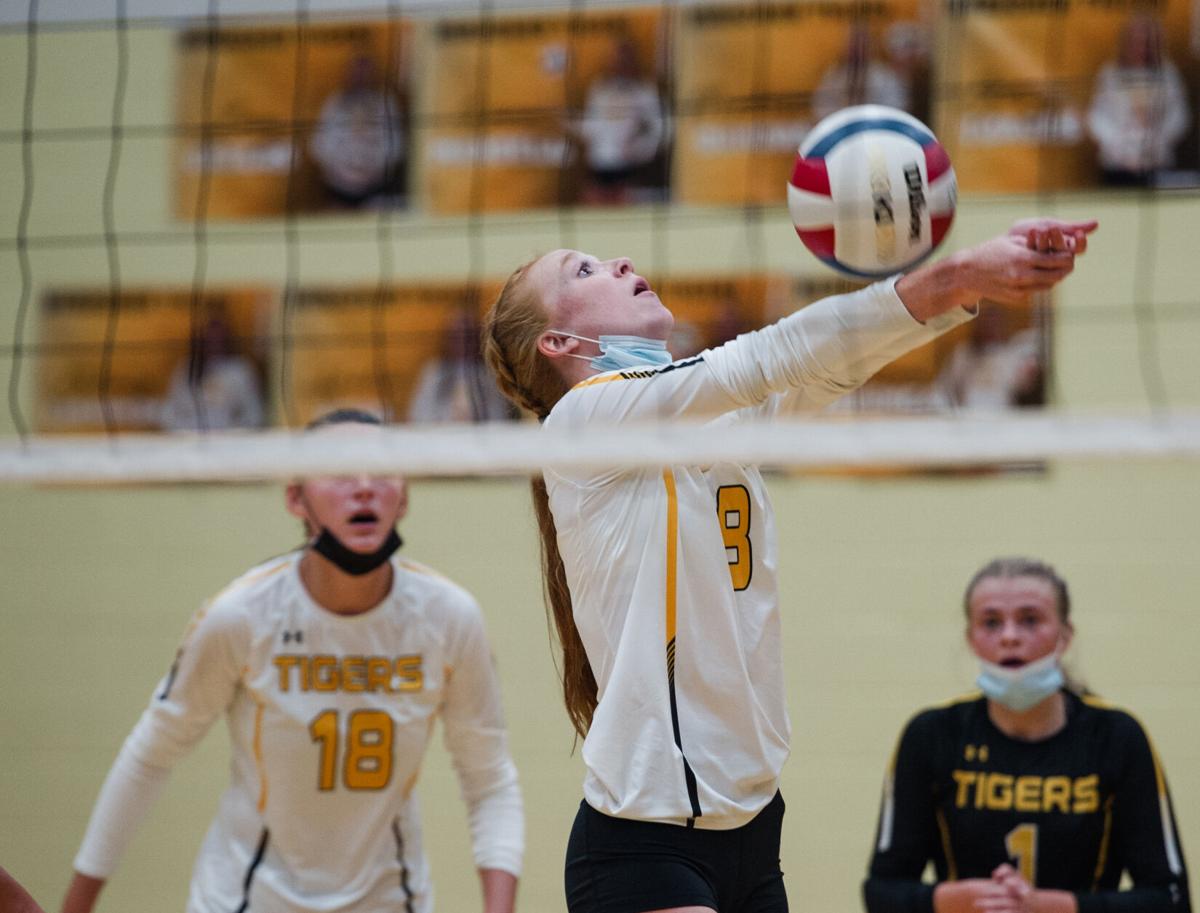 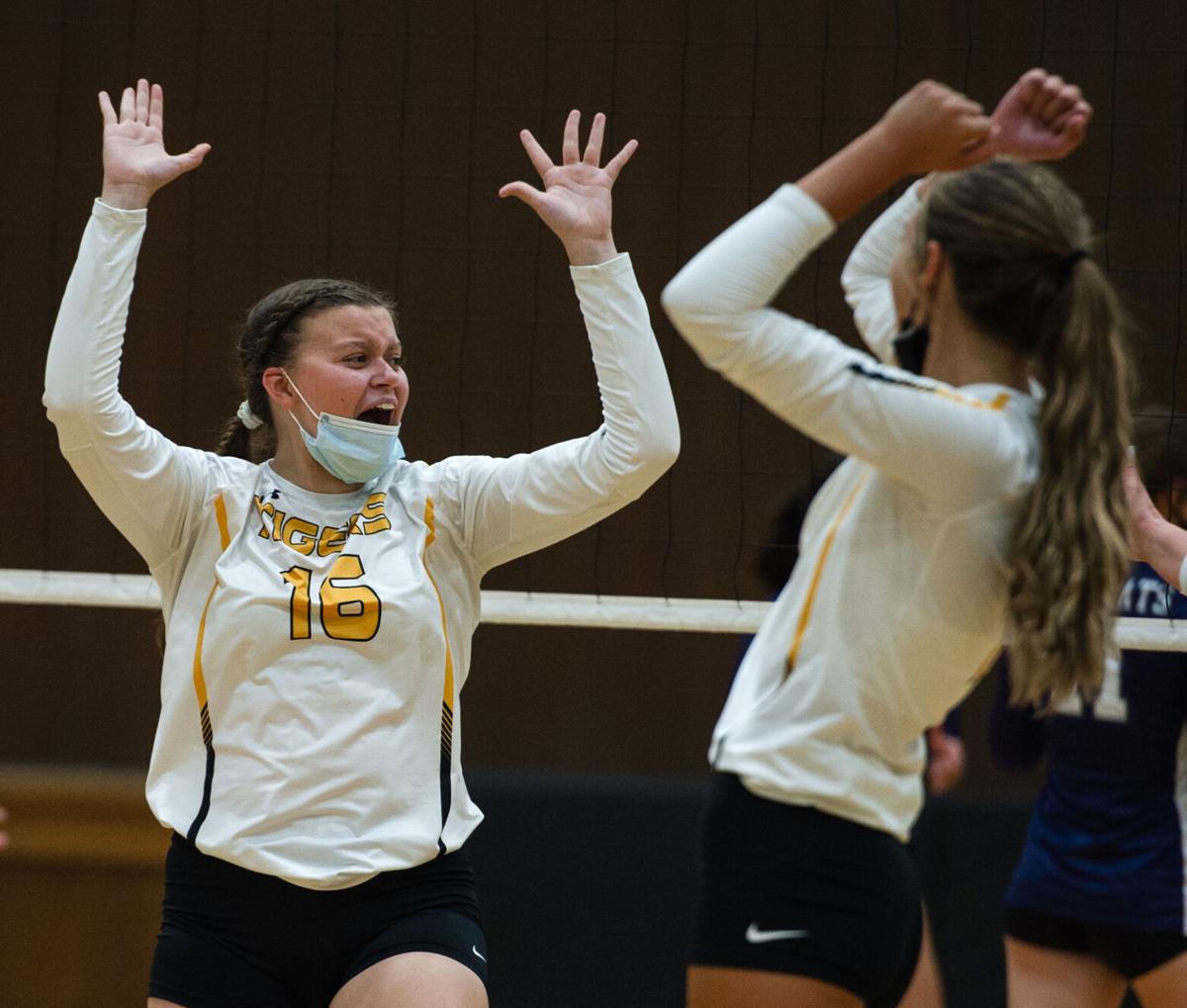 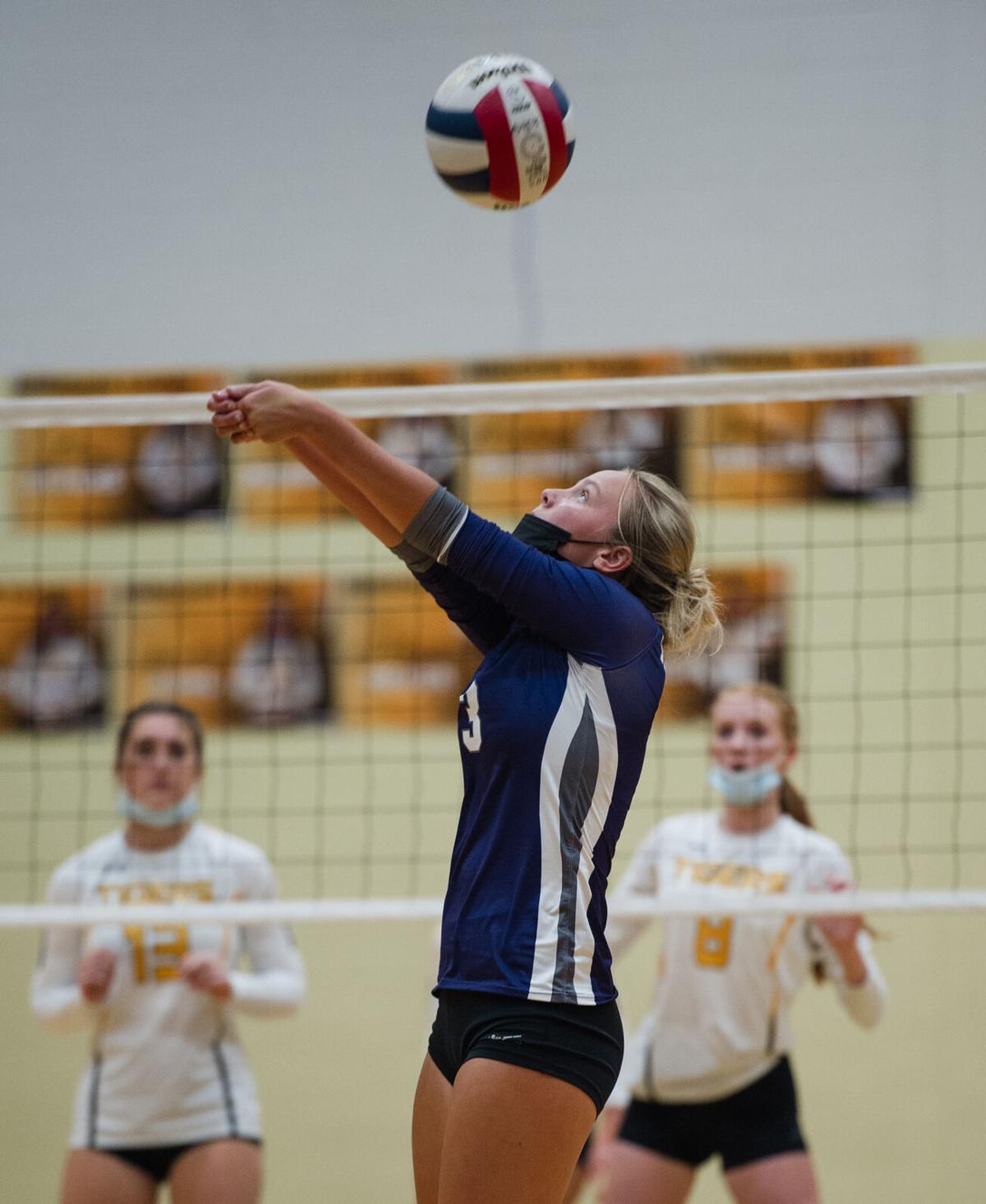 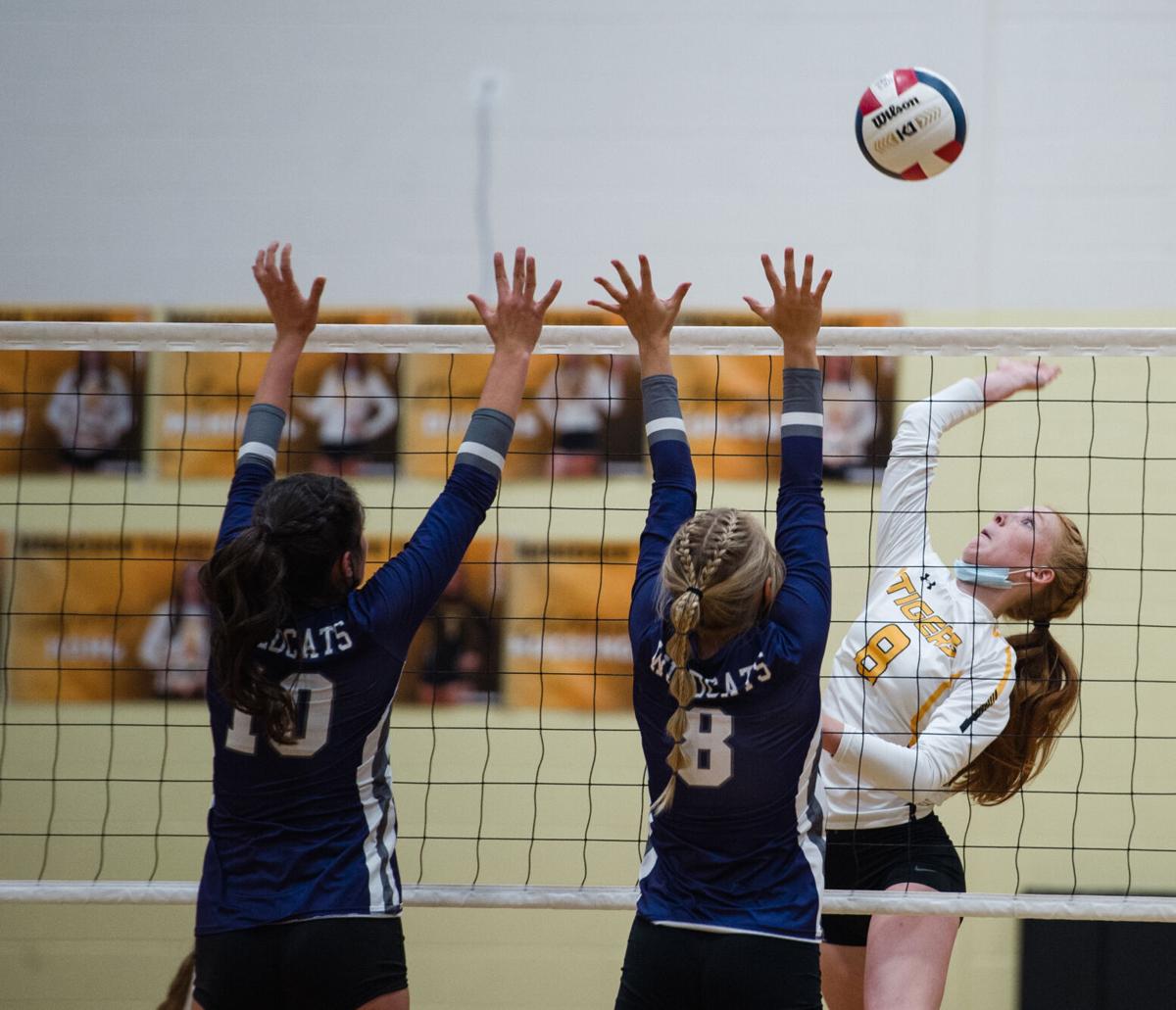 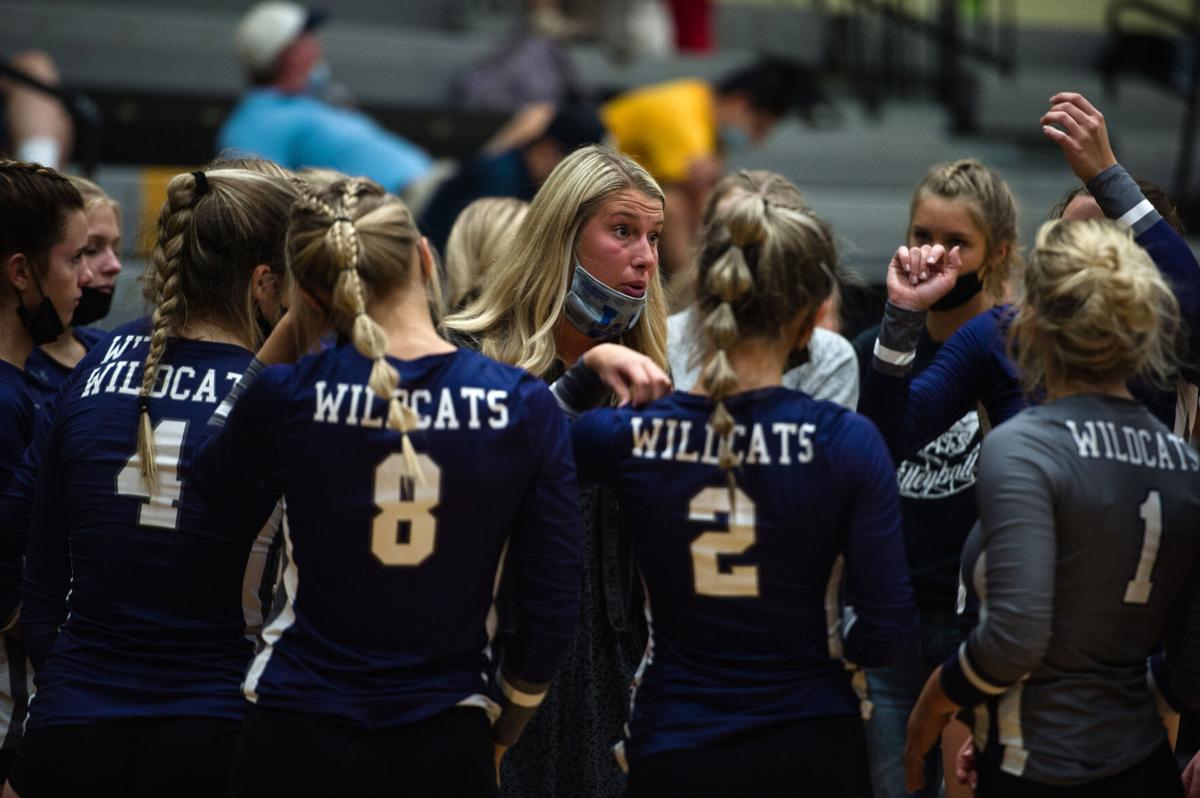 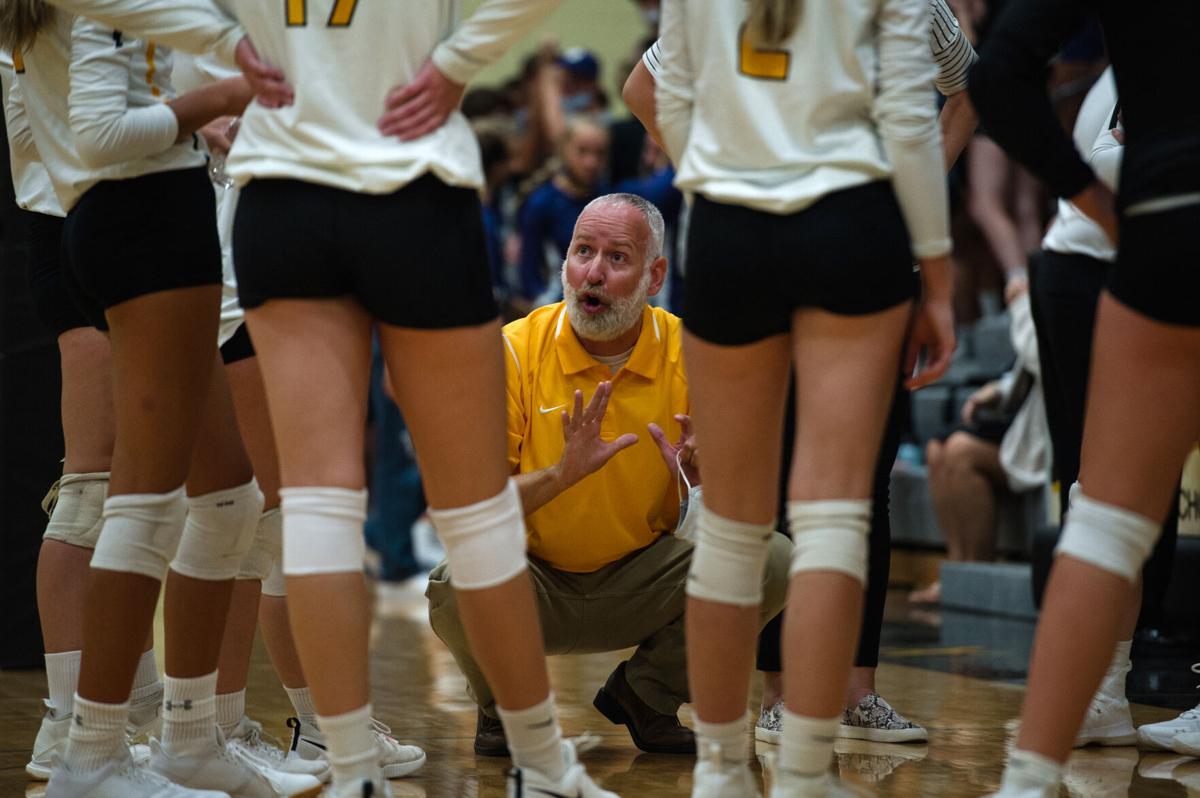 Wilmington High School’s Jenna Jackson, center left, celebrates a point over Herscher High School in Thursday’s matchup in Herscher. The Wildcats lost the first set before coming back for a 2-1 victory.

Wilmington High School’s Bella Reyes and Herscher High School’s Ally Meyer meet at the net to try and tip the ball in their favor during Thursday’s matchup. in Herscher.

HERSCHER — Through the first three matches of the Illinois Central Eight Conference season, the Wilmington volleyball team had been shown little resistance, winning their first three tilts in a combined seven sets.

But the Wildcats were given all they could handle in Herscher Thursday, where they faced their first set deficit of the conference season after dropping the first set 25-19 before fending off the Tigers 26-24 in the second set to force a decisive third set that saw them fall behind 5-0 before roaring back to win the third set 25-18 and take the match 2-1.

“Our girls just have so much passion and energy for the game,” Wildcats coach Alexis Gilbert said. “I just loved seeing them play their game and dig themselves out of that early hole.”

In a frenzied atmosphere with both student sections amped up to late October levels of hype and hoopla, the host Tigers got a pair of big-time kills from freshman Izzie Mendell early on as they scored three of the first four points on the evening.

The Wildcats bounced back and the teams traded points for the next dozen or so, until the Tigers again found some separation at 16-11, a lead they held on to thanks to their ability to keep Wilmington off its game. Tigers coach Joel Huizenga said the team wanted to focus on the 31 attack that the Wildcats employed.

“I think we just did a good job of getting [the Wildcats] out of their system, and what I preach to every team I have is that we want the other team to be hitting out of their back row,” Huizenga said. “And I feel like we did a really good job of that.”

The second set saw Wilmington emerge early, scoring five of the first six points, with the Tigers answering the bell, with Emery Robinson and Ally Meyer consistently finding both Izzie and Emma Mendell, as well as Hailey King and Allison Huizenga, up front in attacking positions, to continually claw back whenever the Wildcats began pulling away.

But with things tied at 24, the Wildcats were able to put away the second set when sophomore Bella Reyes followed up a kill with an ace to give Wilmington the set victory and force a third set.

As soon as the Wildcats appeared to have taken momentum back from the Tigers, the home team ripped off five points to open the third set with Meyer at the service line.

After taking a timeout, Gilbert told her girls what they already know, which was that their attack needed to make more efficient use of the passes from Neve Van Duyne and Anna Liaromatis, as well as serve the ball better.

And with so many girls capable of putting those passes away — five players had three kills or more Thursday — no one player had to feel the pressure of igniting a late comeback alone.

“I think it takes pressure off of individual players because they know if they can’t necessarily put the ball away in that moment, someone else can,” Gilbert said. “That’s what we’ve been working on is having options, and we’re just so athletic all the way around.”

The Wildcats eventually tied the third set at nine, and the teams traded leads again at 11, 12 and 13 before the Wildcats went on a 5-0 run and never let the Tigers get any closer than a three-point margin before taking the third set 25-18.

On pace for the program’s first season with a winning record since the 2015-16 school year, Gilbert said that while she wants her team to enjoy their successful start to the season, nights like Thursday also show how much room there still is for improvement.

“We had a rougher last season so I keep telling the girls we’re awesome and have to keep this fire, but never get too comfortable or too cocky,” Gilbert said. “Herscher came ready to play and their crowd came ready to cheer, I just told the girls we just had to play our game.”

Huizenga said that between Wednesday’s win over Gardner-South Wilmington and the win-worthy effort he saw Thursday, the team is showing that they’re making strides, but those strides will have to continue with plenty of difficult competition on the horizon.

“Tonight we built on what we did against Gardner and next week is right back to the grindstone,” Huizenga said. “Coal City is playing really well and McNamara is such a good team, so the girls know it’s tough — we just have to deal with some health issues and bounce back.”

No individual stats were available for Herscher.