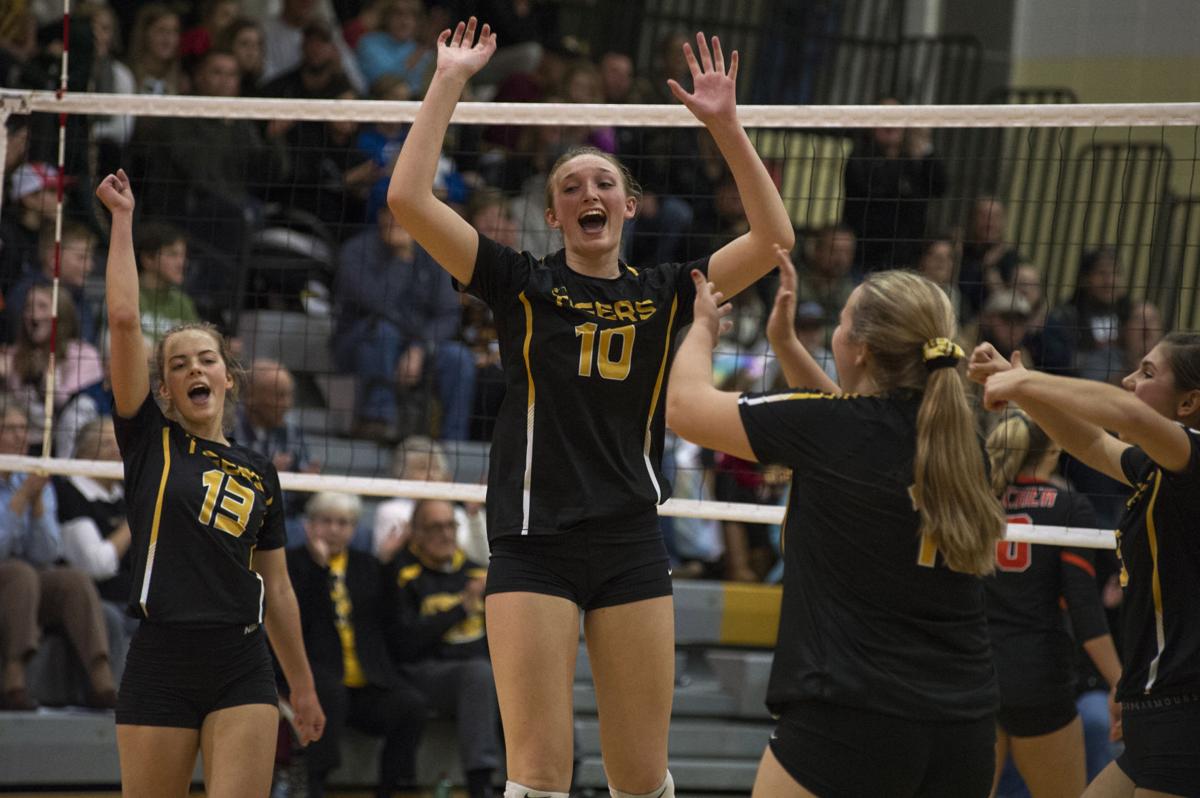 Herscher High School’s Maddy Offerman, center, celebrates a point won with her team, over Beecher High School, late in the third game of Thursday’s Class 2A Regional Championship in Herscher. The Tigers earned a 2-1 win to take their first regional championship since 2012. 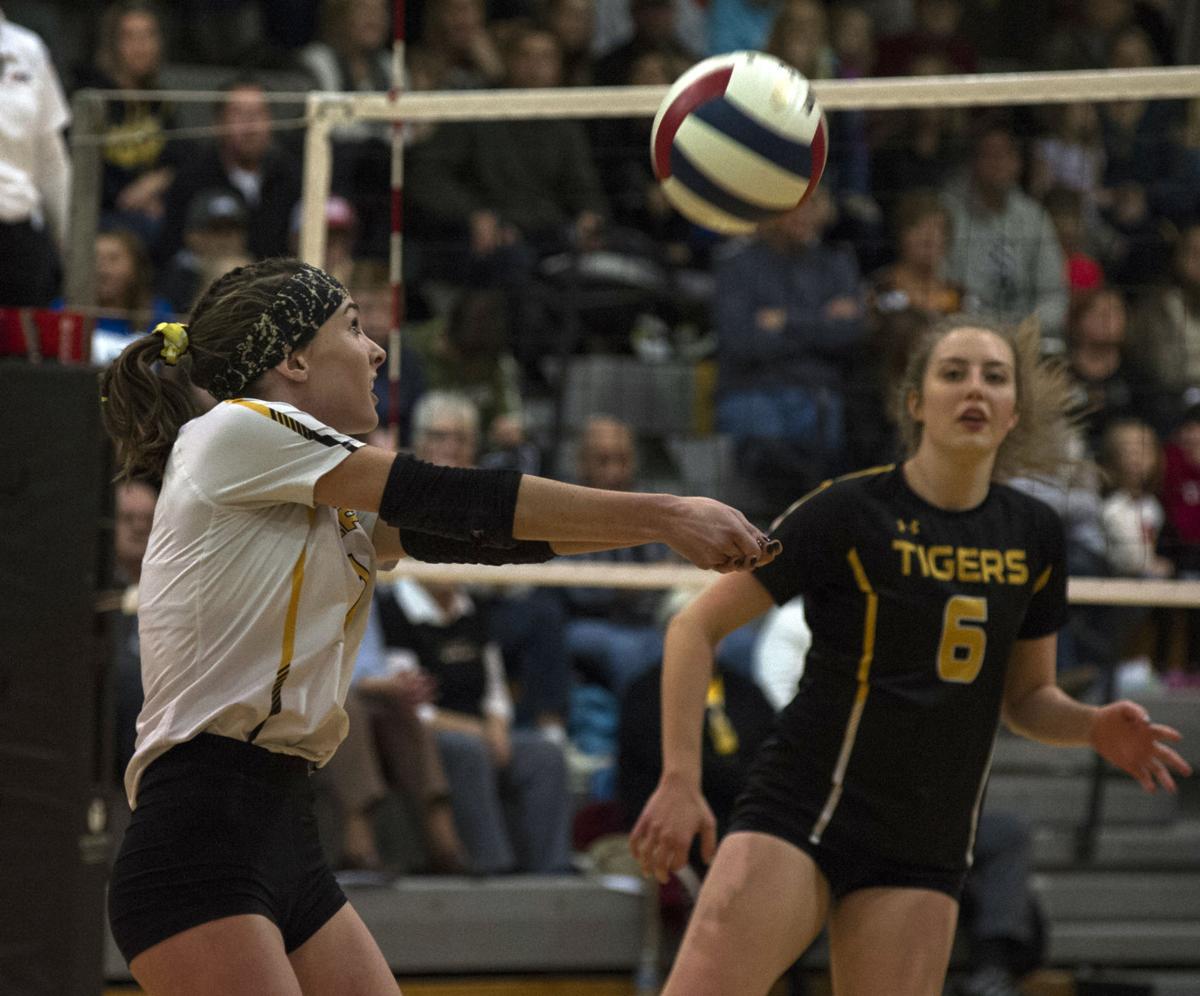 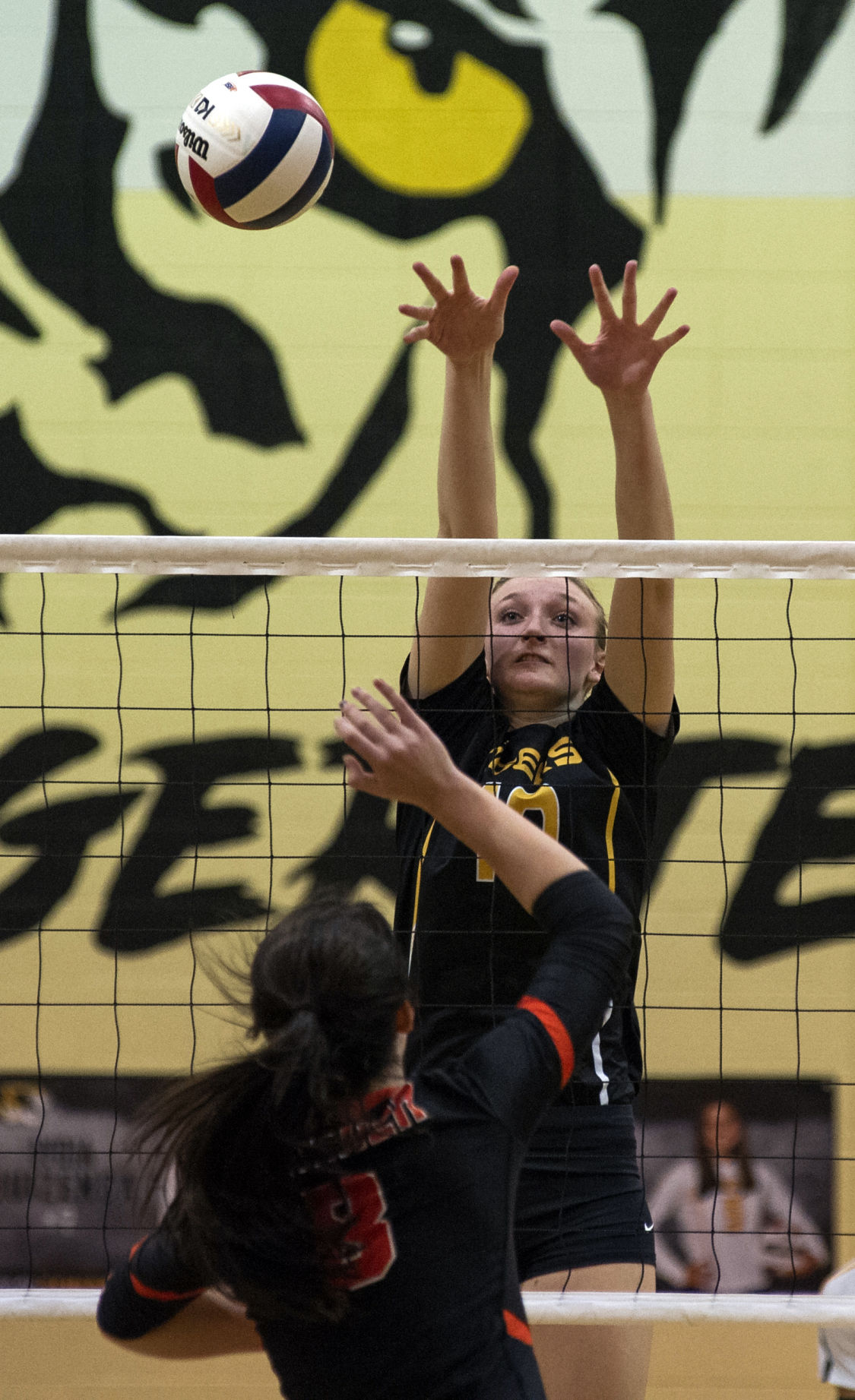 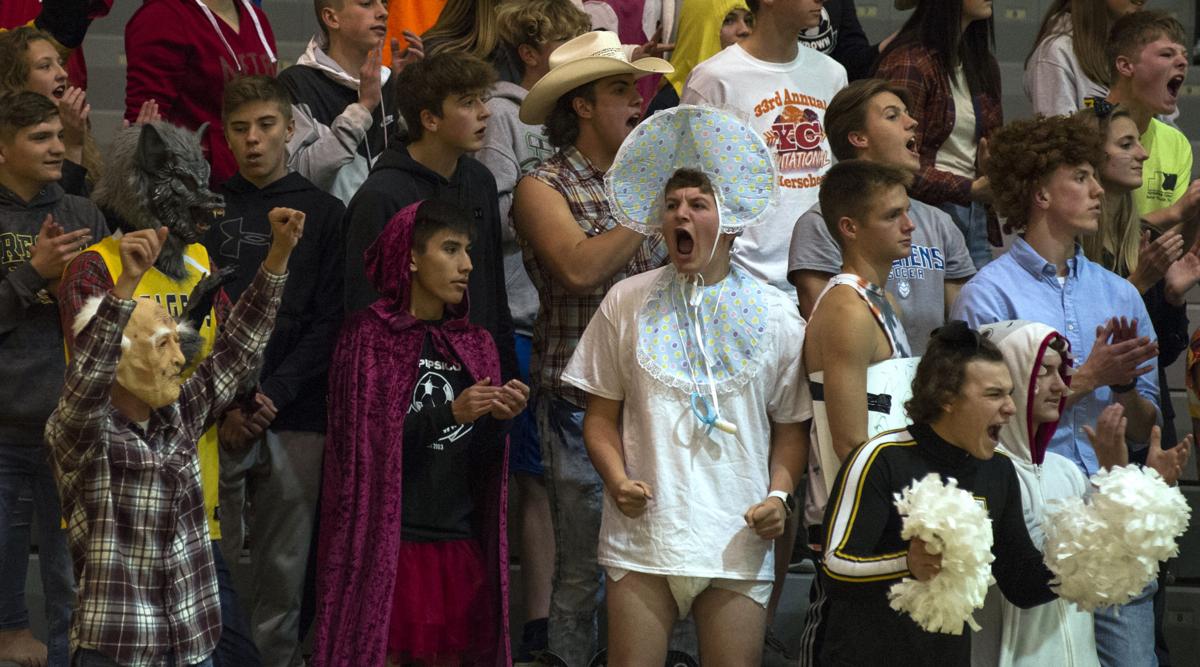 All dressed up for Halloween, Herscher High School students cheer on their team in Thursday night’s Class 2A Regional Volleyball Championship against Beecher High School. 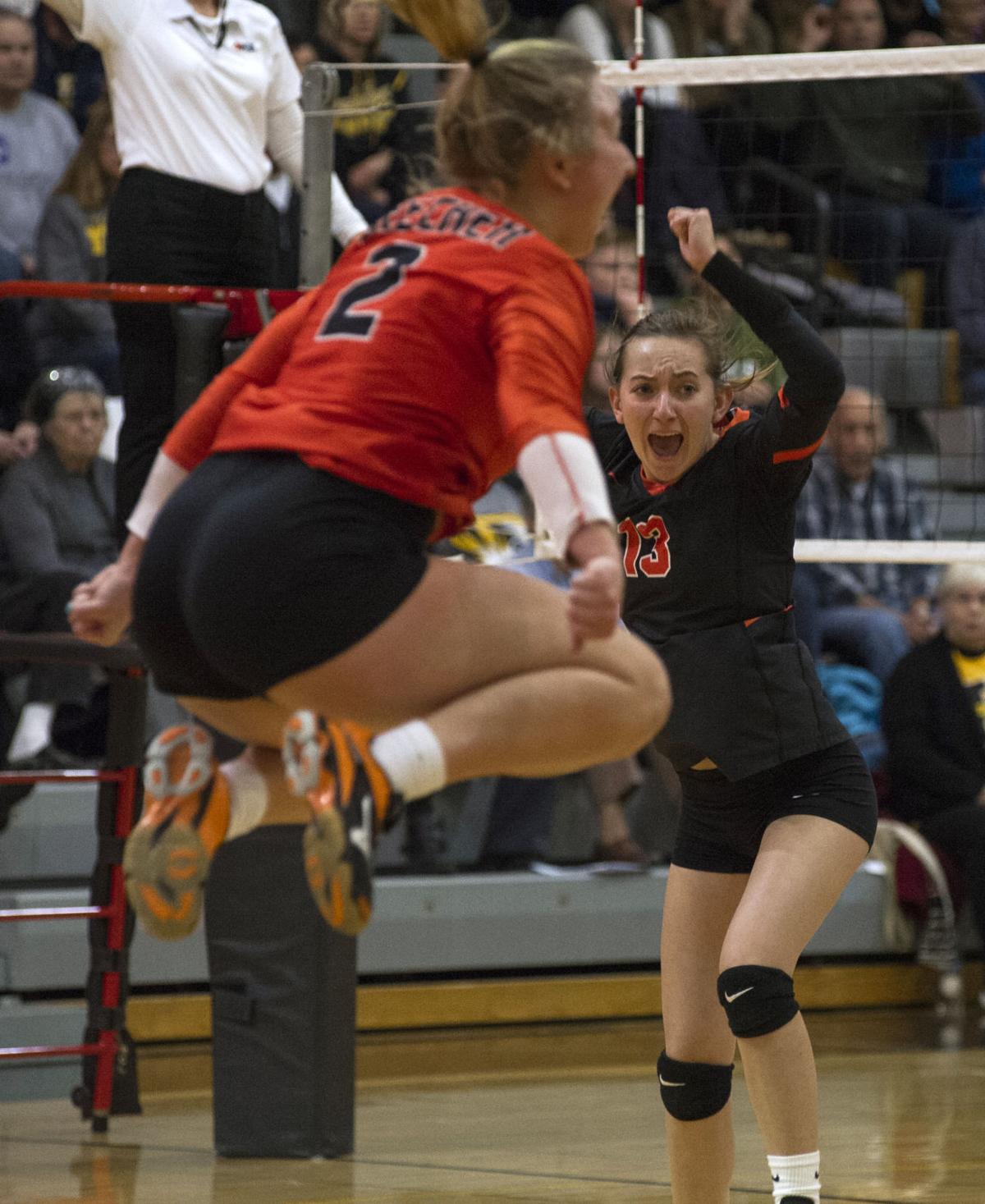 Beecher High School’s Julianna Picicco, right, and Margaret Landis, left, celebrate a win in the first game of the match of Thursday’s Class 2A Regional Championship in Herscher. 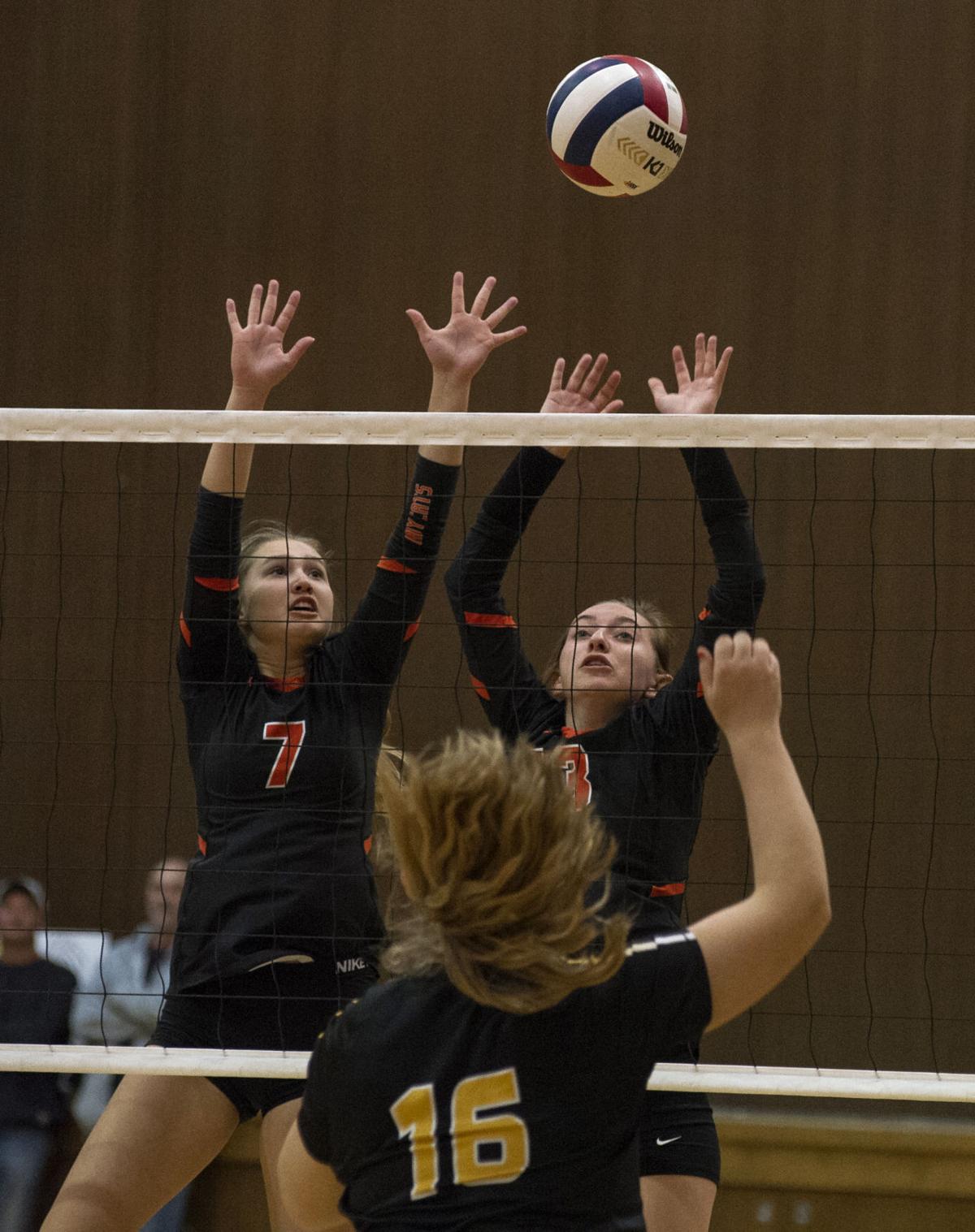 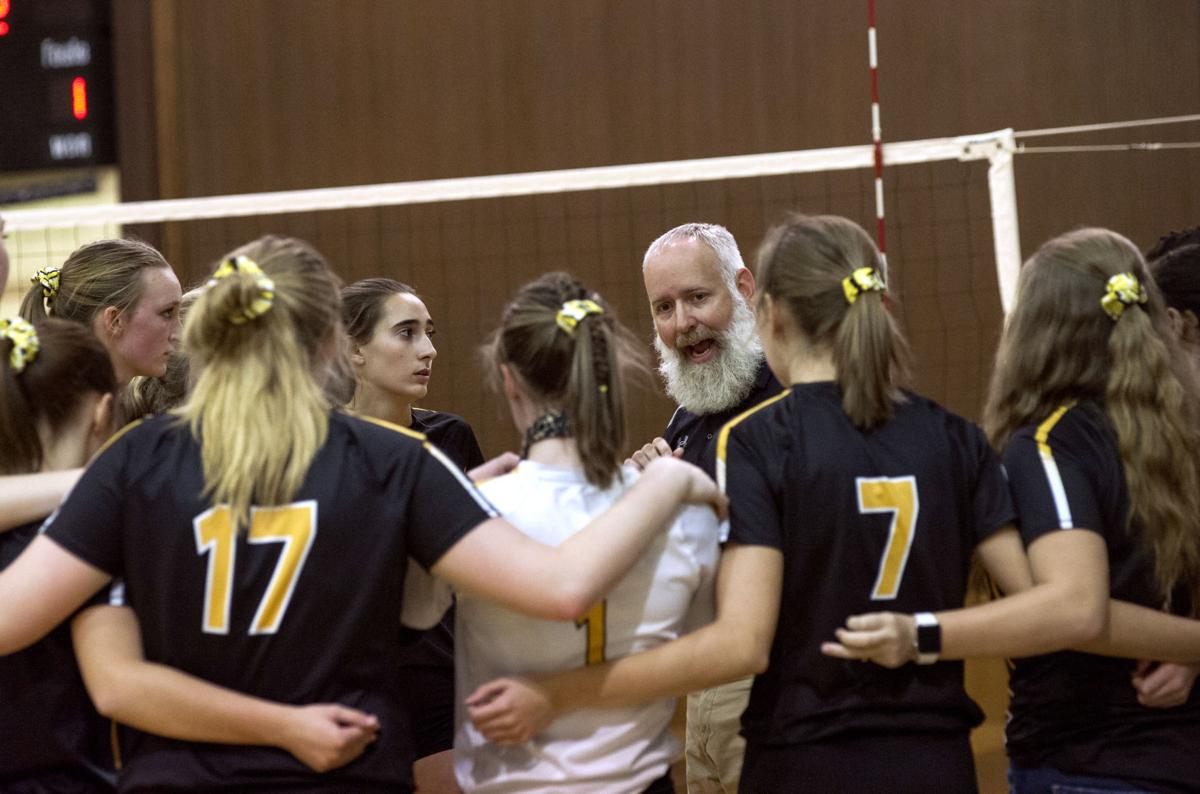 Herscher High School’s head coach Joel Huizenga talks with his team during a time out in Thursday’s Class 2A Regional Championship against Beecher High School.

Herscher High School’s Maddy Offerman, center, celebrates a point won with her team, over Beecher High School, late in the third game of Thursday’s Class 2A Regional Championship in Herscher. The Tigers earned a 2-1 win to take their first regional championship since 2012.

All dressed up for Halloween, Herscher High School students cheer on their team in Thursday night’s Class 2A Regional Volleyball Championship against Beecher High School.

Beecher High School’s Julianna Picicco, right, and Margaret Landis, left, celebrate a win in the first game of the match of Thursday’s Class 2A Regional Championship in Herscher.

Herscher High School’s head coach Joel Huizenga talks with his team during a time out in Thursday’s Class 2A Regional Championship against Beecher High School.

HERSCHER — Olivia Ruder knew it before it happened.

Herscher’s senior libero watched teammate Claudia Huston prepare and time her jump as the outside hitter went up to attempt a match-winning kill in the Tigers’ IHSA Class 2A Herscher Regional championship against Beecher Thursday.

Ruder was right, as Huston jumped up and hammered down a thundering kill in the back left corner to wrap up a 25-13 third-set victory to give the Tigers a 2-1 win over the Bobcats to earn the regional championship plaque.

“I kind of thought, ‘This is it,’ — I knew where to go, I knew what was open and honestly, I just swung as hard as I could,” Huston said. “And it went right where I wanted it to go.”

With this Claudia Huston kill, Herscher is your Class 2A Regional champs with a 2-1 win over Beecher. #tdjs pic.twitter.com/C4okp1KTxY

The win gave the Tigers their first regional championship since 2012, before any players on the current roster had even started playing junior high volleyball.

Tigers coach Joel Huizenga said that after losing a regional championship match to Fieldcrest last season, his team went right back to work with the plan of claiming that elusive hardware this year.

“It doesn’t get any better than accomplishing the goal you set out for at the end of last season,” Huizenga said. “They just weren’t satisfied, so it started in April (when) they said, ‘Coach, this is what we think we can do,’ and they knew why they wanted to do that.

“So many of them put in the time, and this is what happens when you put in time and make that commitment.”

But the Tigers were anything but assured of winning the crown this year against a Beecher team that entered Thursday as winners of 16 of their last 17 matches.

And that hot streak continued early for the Bobcats, who built an early lead in the first set and held off a late Tigers rally for a 25-23 win, putting the Tigers’ backs against the wall in the process.

“I felt pretty good,” Bobcats coach Emily Doersam said of her team’s chances after the first set. “We knew Herscher was going to be tough, we knew they’re a solid team with 10 seniors.

“We’ve got some freshmen and sophomores in our group, but they all pulled together, played hard and gave it their all and I couldn’t be more proud of them.”

While the Bobcats were finding holes, playing defense and scoring points, Ruder said the Tigers weren’t playing up to the standard they’d set for themselves during their area-best 29-5 regular season record.

The Tigers did all that and then some. Huston served up a pair of aces as a part of a 4-0 run to open the second game, and after the Bobcats were able to pull back within one at 7-6, the Tigers got even hotter, running away with a 25-16 run to force a decisive third set.

Here are your champs receiving their hardware pic.twitter.com/1N1fusonlE

“Defensively, something we’ve talked about for the past couple of years is, ‘You decide when the ball hits the floor,’” Huizenga said. “And it really just kind of came out in the second game. We started playing more of that attitude.”

Both teams had small spurts of greatness to open the third and were tied through the set’s first seven points. But once again, the Tigers got in a groove and continued to up the pressure until Huston’s kill put the exclamation point on the night.

While the Tigers are the area’s most senior-heavy team with 10 seniors on their squad, it was junior middle hitter Maddy Offerman who made the difference in the third with four kills and four blocks in the final game.

“If she wasn’t there, I don’t know if we would have been able to replace her,” Huston said of Offerman. “We needed those blocks.”

And for Offerman, she was just happy to get her seniors back in a sectional for the first time since they were in eighth grade.

“It’s so awesome,” Offerman said. “I know they’ve been working so hard through their years, and I’m glad we got to do this.”

On the other hand, the loss for the Bobcats ended their season at 24-9 and ended the prep volleyball careers of seniors Arianna Avelar, Margaret Landis and Kaylie Sippel, the latter two spending three years on the varsity level.

“These seniors mean the world to me, they’re going to be very hard to lose,” Doersam said. “They’re a great group, they work hard, they push the younger ones and developed the younger ones.”

And here are the champs celebrating with that hardware pic.twitter.com/kQ4lp5HqsZ

For the Bobcats, Sippel had five kills, five digs, 11 assists and a block. Landis had 11 digs, two kills and an ace. Lilly Avelar had six digs and an ace. Rhiannon Saller had four kills and two blocks.

The Tigers advanced to the Class 2A Watseka Sectional, where they will take on Tolono Unity at 7 p.m. Monday for a spot in the Sweet Sixteen.