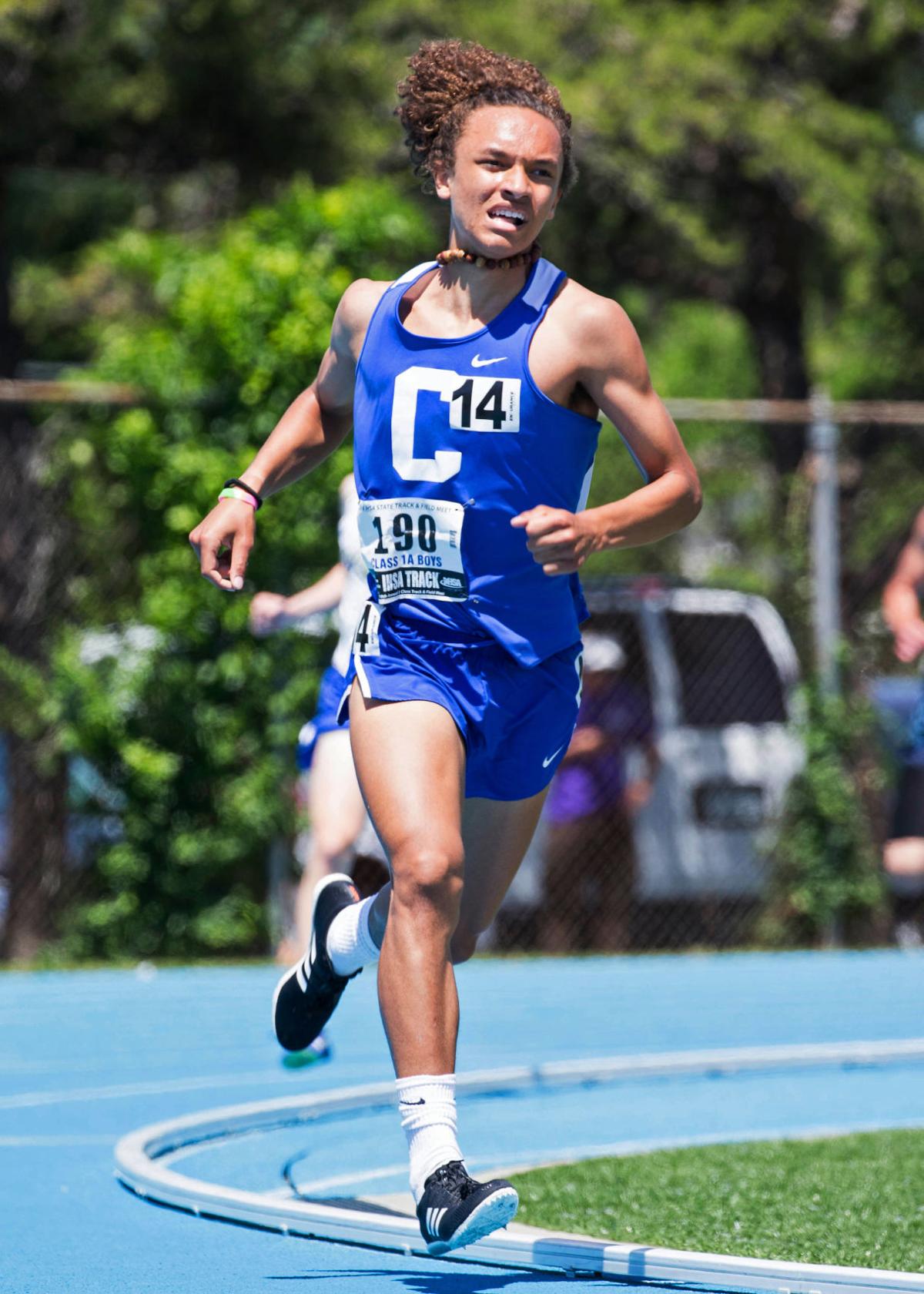 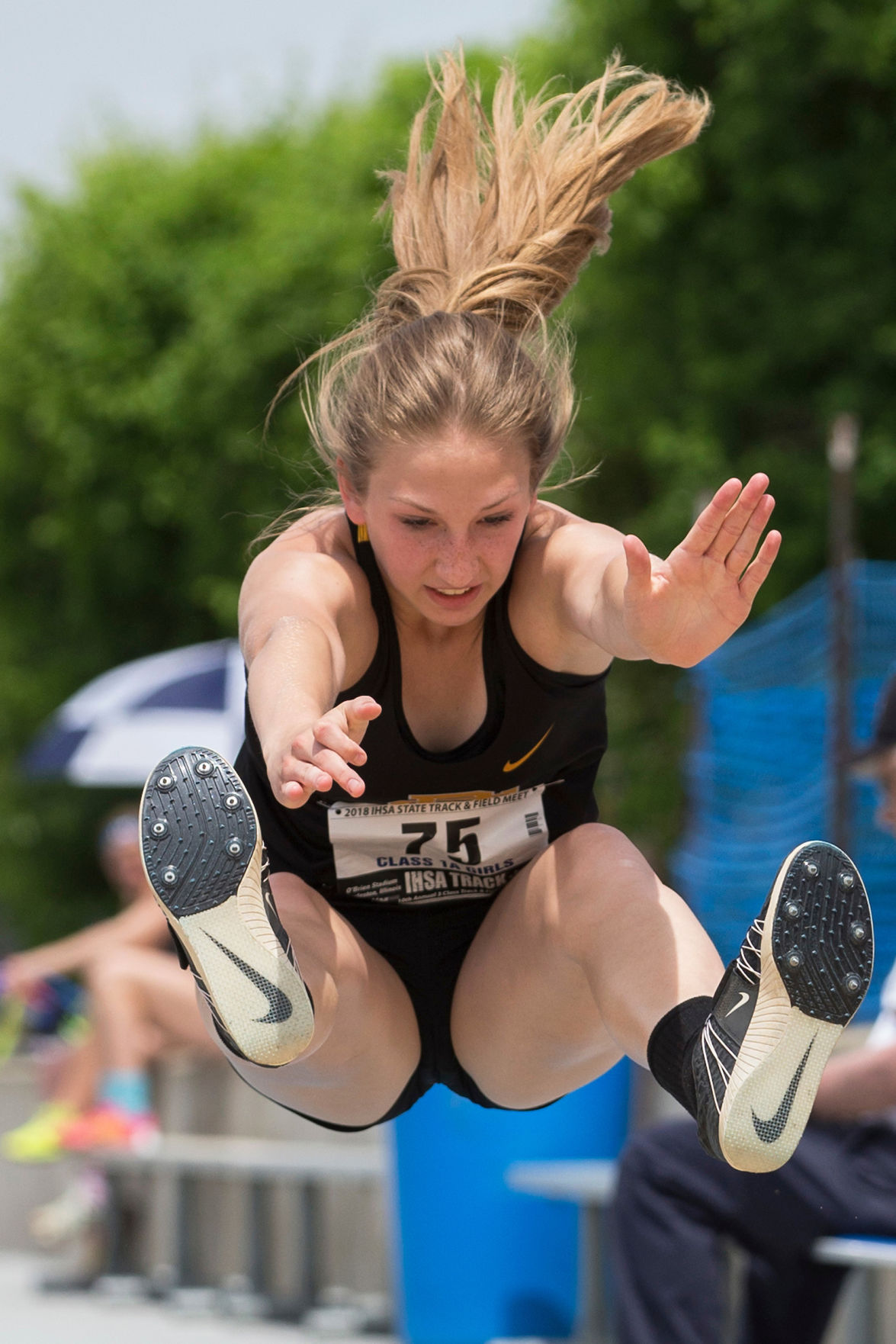 Reed-Custer’s Jaden Christian competes in the Class 1A Triple Jump during preliminaries. 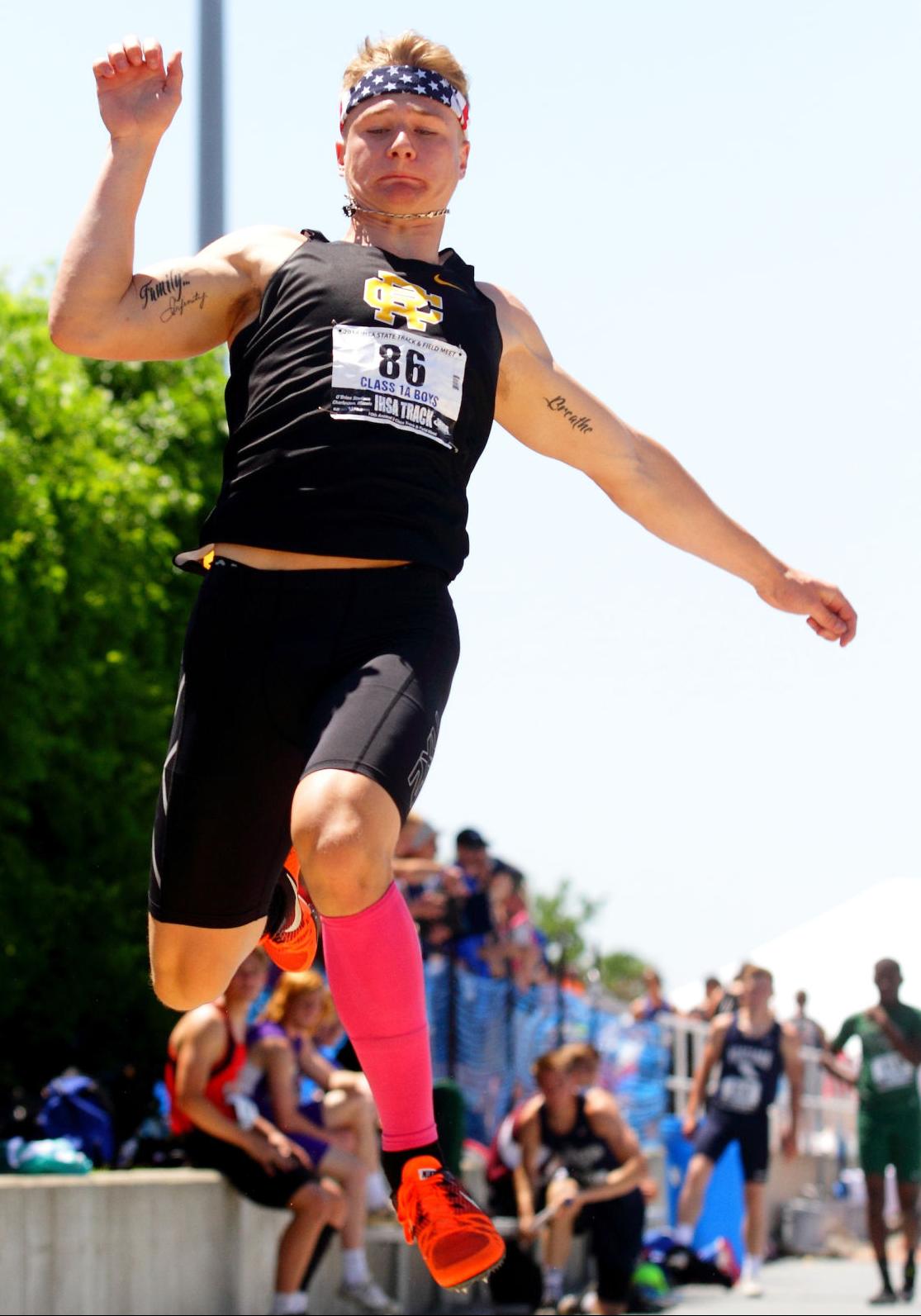 Reed-Custer’s Zach Weaver competes in the Class 1A long jump prelims at the IHSA State Track & Field Meet. Weaver advanced to the finals with a jump of 21-1. 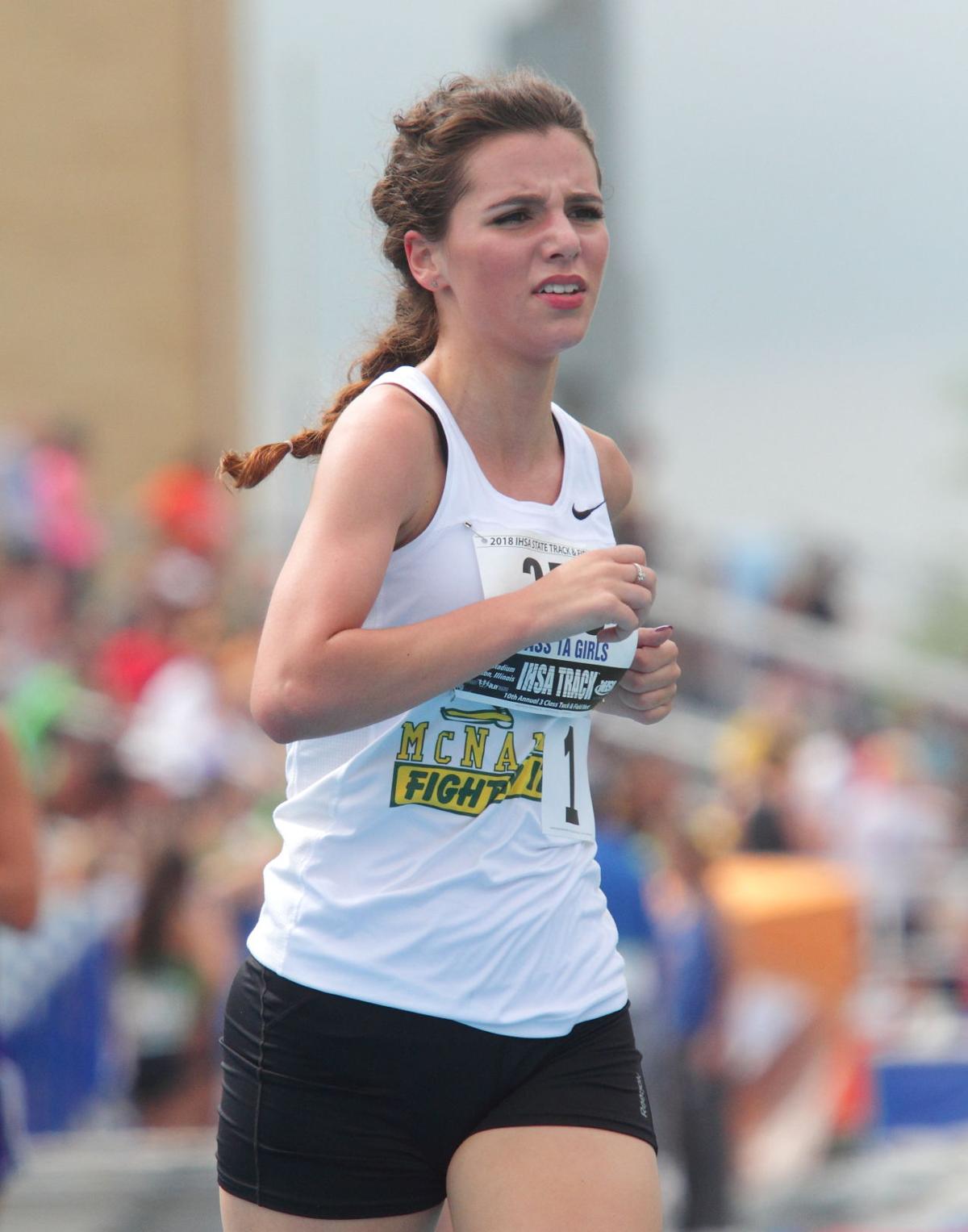 Bishop McNamara’s Faith Provost competes in the Class 2A 3200-meter run during the IHSA State Track and Field Meet. 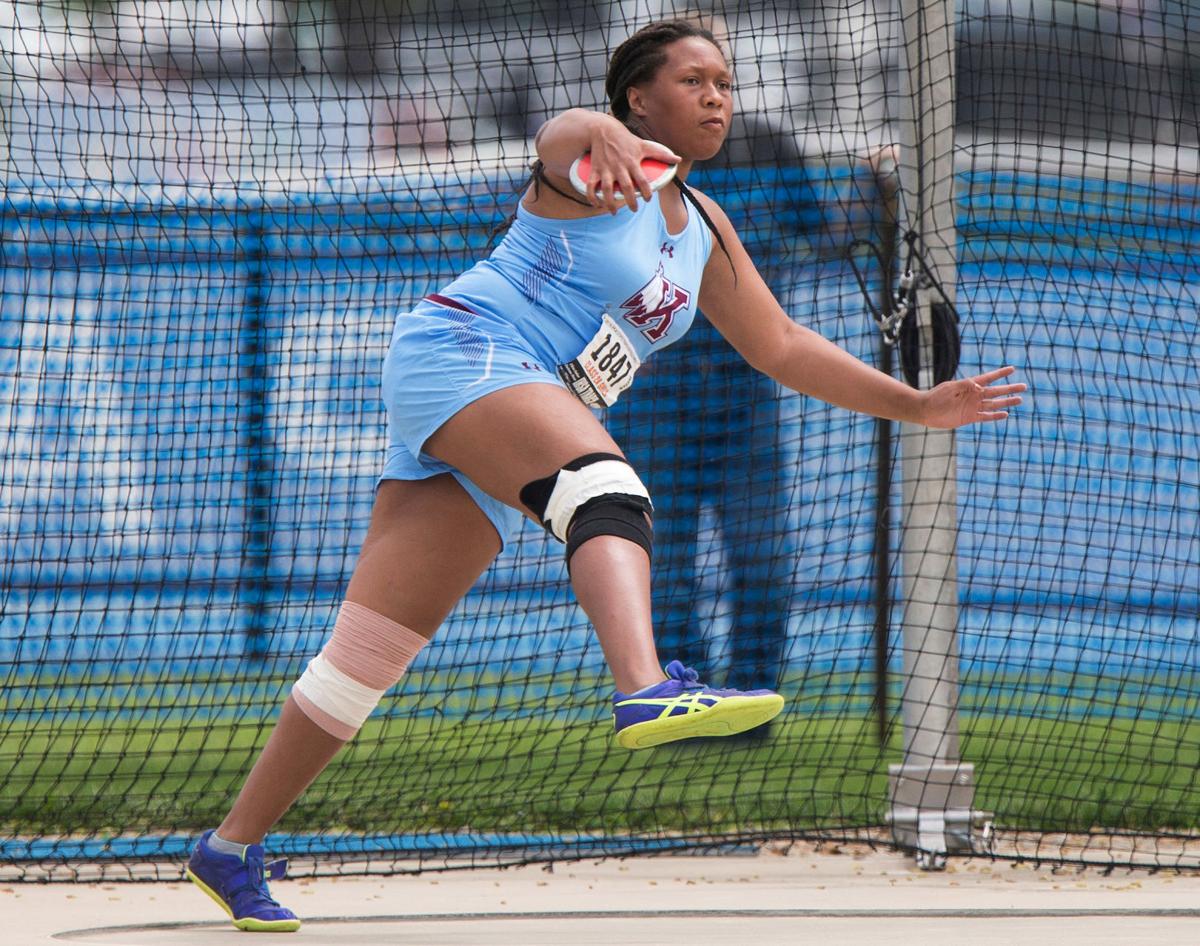 Just a sophomore, get used to hearing and seeing Christian’s name. After qualifying for state in the triple jump, long jump and 200-meter dash in the Seneca sectional, she earned herself an eighth-place finish in the long jump with a jump of 17-feet-1 and a fourth-place podium spot in the triple jump with a distance of 37-feet-0.5. Charleston, you’ll be seeing her again.

Switzer joined Christian in the triple jump at the state meet after posting a distance of 36-feet in the Seneca sectional for a third-place finish. She followed her sectional performance with a jump of 35-feet-3.75 that placed her 11th. She returns for one final season, aiming to make the podium in Charleston.

Wilmington's track program has something special in Ohland. Just a freshman, she posted a height of five feet in the high jump, tying her for first place in the Seneca sectional to qualify for state. She advanced to the final day for a possible podium finish but didn’t post a qualifying height. However, she's only going to improve and still has three more chances to make podium.

Wessels undoubtedly goes down as one of, or maybe the, most well-rounded athletes to grace the halls of Cissna Park. After highly successful volleyball and basketball careers, she finished her track career by qualifying for state in four events after the P-B-L sectional: 200 dash and the 4x100, 4x200 and 4x400 relays. She helped the Bearcats’ 4x100 relay finish in fourth place (50.39), and the 4x200 relay take sixth (1:46.51).

During the past three years, Provost has shown herself to be an absolute animal within the area’s running scene. Whether it’s cross country or track, you can expect to see her at the top level in the state. After the P-B-L sectional saw her qualify for state in the 3200 run with a time of 12:23.89, she topped that performance with a time of 12:15.18, good enough for 17th place. There's no doubt she’ll be back for one final run at the podium next year.

There's no better way for Benson to go out as a Wasteka Warrior than by qualifying for Charleston, and that’s exactly what she did. She finished in second place at the P-B-L sectional after a throw of 35-8 in the shot put, advancing her into state competition. After her junior campaign saw her finish in 12th place, she leaves Watseka as a two-time state qualifier.

The Kays might have an absolute gem on their hands for the next three years. Walker, only a freshman, quickly showed she’s not your average underclassman as she claimed a championship in the Kankakee sectional with a throw of 105-10 in the discus. She took second place in her state qualifying heat with a throw of 101-feet, which ended her season but not before she made quite the first impression.

Similar to Wessels, no matter what sport Duis plays, she excels. After outstanding seasons on the hardwood in volleyball and basketball, she breezed effortlessly into track and found herself underneath the bright lights. She was a part of Milford-Cissna Park's 4x100 and 4x200 relays, both of which earned top six finishes. She also qualified in the 200 dash after a top four finish at the P-B-L sectional with a time of 26.89 seconds.

Ramsey put herself head and shoulders above her teammates, being the only Trojan on the girls side to qualify for Charleston. Competing in the 100-meter hurdles at the P-B-L sectional, she finished with a 16.48 to make it through. Not a bad way to go out in your senior year.

Central has been a pipeline for runners during the past number of years. But Gresens is making it a mission to put the field events on par as well. She was the only representative on the girls side for the Comets in Charleston after a jump of 34-3.5, winning the triple jump, and another distancing 16-0.5 in the long jump, earning herself a second place finish. Just a sophomore, she has two years left to increase her legend.

The track season was very kind to Fasano, and the Seneca sectional was even more kind. She qualified for state competition after winning the 800 run with a time of 2:29.58 and took second place in the 1600 run with a time of 5:37.00. Both finish times were also the best in the area.

If you need one full lap around the track, Rink is just the girl. The third Wildcat to qualify for state competition, she finished in second place at the Seneca sectional with a time of 1:05.88 in the 400 dash. That time also vaulted her into owning one of the best times in the area among 400 dash runners.

You could always find Bunting’s name at the very top of whichever meet Watseka was at when it came to the discus throw. She qualified for the state meet after a throw of 110-2 at the P-B-L sectional. That throw was also second best in the area.

Provost might be the present for the Irish, but Rainbolt is unquestionably the future of Irish running. Only a freshman, Rainbolt finished behind her teammate at her sectional with a time of 12:46 in the 3200 run and took 18th place at state with a time of 12:19.96. Having three years left to improve on that time, Bishop McNamara possibly has a future state champion on its hands.

While her teammate, Christian, was handling triple and long jump duties, Ruzich was taking care of business in the pole vault and 100 hurdles. During the Seneca sectional, she punched her ticket to Charleston in both events with a height of nine feet and a time of 16.51 as a freshman. Reed-Custer has a plethora of riches at its disposal for the next three years.

Zack was the lone individual boys track athlete to make a podium at state, finishing ninth in the Class 1A triple jump. He also qualified for the preliminaries in the long jump. His leap of 44-3 in the triple jump during the season was tops in the area and his distance of 21-6.25 in the long jump was second in the area. And as successful as he was in the field, Zack was also one of the most dominant in the area on the track. He had the fastest 200 time (23.06) and was second fastest in the 100 (11.12) and 400 (52.18).

Weaver also made a trip downstate this season, finishing 11th in the Class 1A long jump. The senior’s long jump of 22-6.5 was his season best, was tops in the area, and gave him first place in sectionals. On the track, Weaver was one of the elite in the 400 dash, and his best time of 52.31 was the third-best in the area.

After spending the fall as one of the area’s top cross-country runners, Ditta didn’t miss a beat in the spring. He qualified for state in the 3200 and took home a 16th place finish in Class 1A with a time of 10:07.45. Just a sophomore, Ditta already was the area’s best distance runner, as his bests of 4:44.15 in the 1600 run and his run at state in the 3200 run were both tops in the area.

Valone spent his senior season as one of the most lethal athletes in the area in the discus event as his season-best throw of 135-8 was a foot shy of the best throw in the area. And Valone’s dominance was not limited to the area as he qualified for the Class 2A state finals in the discus, throwing 122-10 in the preliminaries.

Another senior from the Interstate Eight who dominated in the throwing events, Zacharias was one of the area’s best in the shot put this season. His best throw of 46-5.5 was just half an inch off the top mark in the area. Zacharias made it to Charleston in the shot put, where he threw 41-5.25 in the preliminaries in Class 1A.

Kuntz’s skills in the triple jump landed him a trip to state, where he jumped 40-10 in the Class 1A preliminaries. His mark of 41-10.5, a season best, was second in the area in the triple jump. The junior also had a strong season in the 300-meter intermediate hurdles, where his best time of 43.53 was third in the area

Williams made his name in the 300 hurdles this season, crushing competition across the state. His season-best time of 41.72 seconds was tops in the area by more than a second. Williams qualified for the state preliminaries, where he ran a 42.94 in Class 1A.

Willis joined a crowded group of state qualifiers in the shot put, throwing 44-4.25 in the Class 1A preliminaries. His throw of 46-4 was good for second place in his sectional and was also the third-best throw in the area this spring.

Caspary joined Ditta to form a pair of superb sophomores for the Comets. He spent the season as the area’s best 110-meter high hurdles runner and his season-best time of 15.88 was almost No. 1 in the area. At state, Caspary posted his second-best time at 15.89.

Hood ended his senior year on a high note ... literally. He qualified for state in the pole vault, jumping 13-feet in the Class 1A preliminaries. His jump of 13-2 in his sectional was enough for an individual sectional championship, while his season best mark of 13-7 was the best in the area.

Although the Comets certainly will miss Hood, Pickard, a freshman, will step in right away as the school’s heir apparent in the pole vault. He joined Hood at state, jumping a season-best height of 12-6, which didn’t qualify him for the finals but was good enough to tie for the win in his heat. Expect the soon-to-be sophomore to be plenty decorated by the time he graduates.