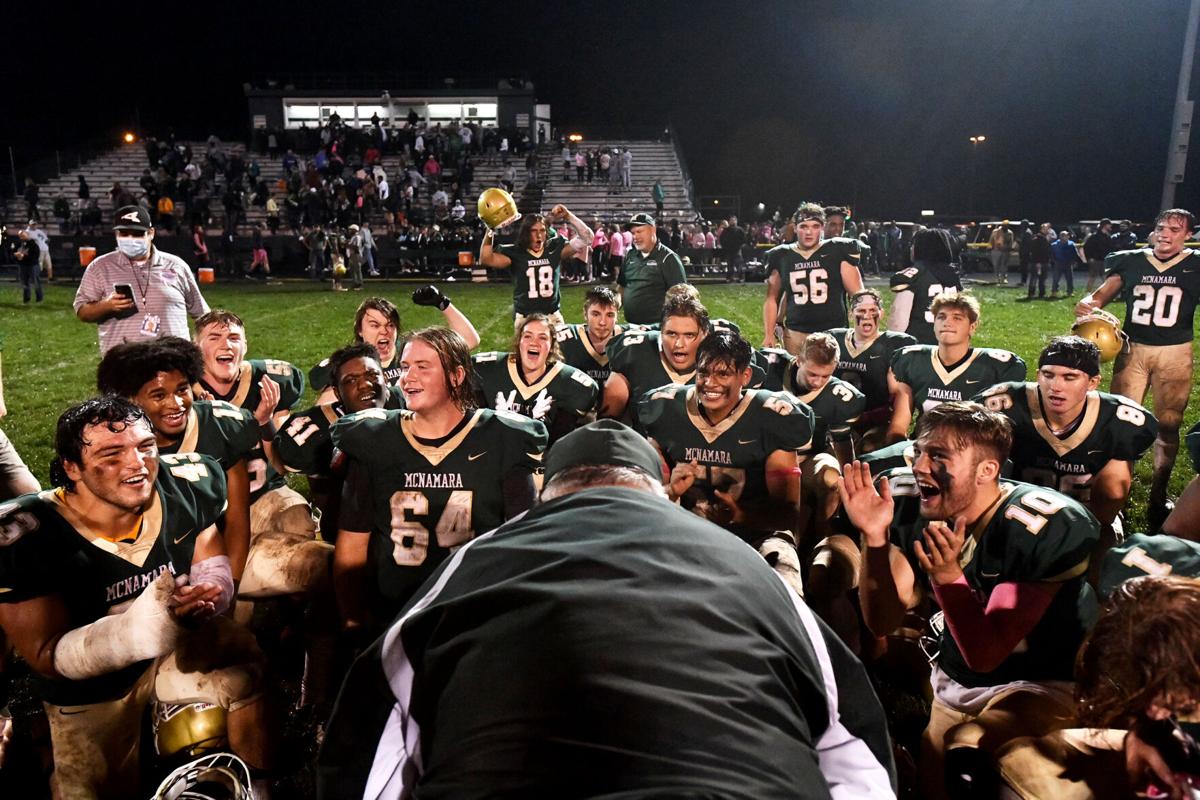 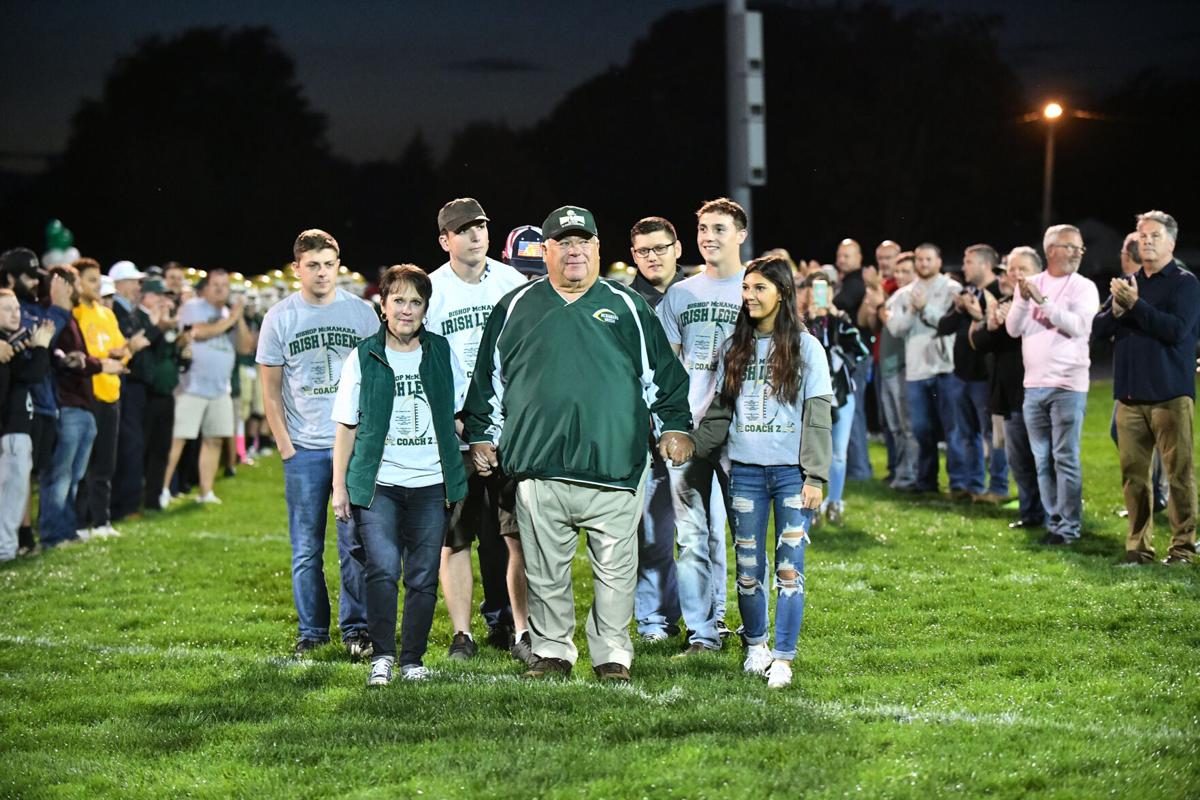 Editor’s Note: The Z-Files is a nine-part series on Bishop McNamara football coach Rich Zinanni, who is retiring after the 47th season of his hall-of-fame coaching career this fall.

The 368 football games and five state championships Rich Zinanni has won while guiding the Bishop McNamara football program the past 47 years have provided him with opportunities most people only could dream of.

He’s golfed with people he never would have imagined meeting at courses he never thought he would see beyond a TV screen, which account for just some of the trips he’s taken through football. He’s coached various local, state and national all-star games that have produced NFL players, in addition to coaching three professionals at McNamara.

Before his 1992 marriage to his wife, Jane, Zinanni would spend time during the summer with various college football programs and at college coaching clinics, as he wanted to model his Fightin’ Irish program under a similar mold. That included a week during the summer at UCLA, where head coach Terry Donahue and quarterback Troy Aikman had the Bruins in the national conversation.

But for Zinanni, what’s meant most during half a century of teaching and coaching is the relationships he’s built along the way.

“The biggest thing I enjoyed was the relationships I built with coaches,” Zinanni said. “I got to coach in the Illinois Shrine Game about six times, and us coaches had a great time; we would meet, figure out what we’re coaching, then go out in the evening together.

“I got to become great friends with a lot of people from all over the state.”

The first shrine game, a state all-star game that benefits Shriners Hospitals for Children, Zinanni coached in was in 1982, when he was joined by his own quarterback, Kelly O’Connor, and Kankakee native and Westview star running back Jimmy Smith, a pair of players who ended up stealing the show that weekend.

“Kelly and Jimmy were putting on a show that week,” Zinanni said. “The other quarterbacks were going to Indiana and Wisconsin, and during the week, one of the coaches said, ‘Hey, your kid’s better than those guys; start your kid.’ I said I didn’t know if I want to start my own kid, but he said he was a hell of a lot better than those other guys.

“And all the coaches were coming over to me asking who that was because Jimmy Smith was putting on a show with all the stuff he was doing.”

Zinanni, who is a member of the Illinois High School Football Coaches Association Hall of Fame, Chicago Catholic League Hall of Fame and Bishop McNamara Wall of Honor, also had the pleasure of coaching in the 2002 United States Army All-American Bowl, a national all-star game that featured 15 players who went on to play in the NFL, including notable players such as Vince Young, Nick Mangold, Anthony Fasano, Jason Avant and Maurice Clarett, the latter of whom didn’t end up actually playing in the game.

Some of the personal accolades he’s earned during the years include the Chicago Catholic League Anthony R. Lawless Outstanding Coach award and the Chicagoland Officials Association Coach of the Year, and he was named the Chicago Bears Coach of the Week several times.

“Every award I’ve gotten, whether it be a hall of fame or coach of the year, is a team award and a school award,” Zinanni said. “I had great assistants ... all the guys I had with me forever and the guys I have now.

“The people that work the concessions, the people in the press box, the chain gang, they just show up; I never have to call and ask if they’ll be there,” he added. “It’s definitely a team award, and the reason is because of this team, not me.”

The same goes for the teams Zinanni saw on the field. And in 1997, Zinanni saw one of his own players make the largest stage in the sport for the first time, when 1992 McNamara graduate Thomas Guynes became the school’s first NFL player when he played tackle for the Arizona Cardinals.

“As cliche and corny as it sounds, football was the medium that all of these individuals used as men to teach us as boys growing into young men how to live life,” Guynes said. “It was really just to be a good person and understand that work is hard, but enjoy the work.

“If you enjoy the work, the work isn’t that hard, and if you take that into what it is that you do and you do it to your best ability and genuinely are a good person, good things will happen.”

Tyjuan Hagler, a 2000 Bishop McNamara graduate, had the fortune of learning under various coaches of high regard between youth football coach Duane Tucker, high school, college at Cincinnati University and the NFL, where he helped the Indianapolis Colts win Super Bowl XLI in 2007 under the guidance of recent Pro Football Hall of Fame inductee Tony Dungy.

“It’s awesome because I learned a lot of things from a lot of different people, so it’s a combination of what it is I learned from Coach Z, or Duane, or Tony Dungy, or [former Colts coach] Jim Caldwell, or [former Cincinnati University coaches] Mark Dantonio or Rick Minter,” Hagler said. “Whatever stuck out to me, or whatever I found to be monumental, what meant most to me or what I choose to believe in I could apply to be successful.”

Jonathan Ward is a 2016 McNamara graduate who plays running back and special teams for the same Cardinals organization Guynes once played for. For Zinanni, all three of his professional players had a common trait.

“You can take Thomas, Tyjuan and Jonathan, and they’re all super young men with really good heads,” Zinanni said. “They were focused and determined to succeed in life, and they’re doing great.”

All of McNamara’s success and memories made on the gridiron the past 47 years were relived last Friday, when Zinanni took the home field at the stadium now named in his honor for the final time during the regular season.

He did so with an escort from his family and a bagpipe player, through a tunnel of past and present players, and onto the field, where principal and longtime coworker Terry Granger spoke and athletic director Aaron Hamilton presented Zinanni with that night’s game ball before Zinanni himself spoke in the final moments before a mammoth 36-15 win that saw the Irish improve to 4-3 on the year and put them a win away from playoff qualification.

“It really meant a lot to me to see all those guys come back to me,” Zinanni said. “There were a lot of kids here; they’re not kids anymore I guess, and some [who] couldn’t come [who] I got texts and phone calls from.

“It’s been humbling, and I’m appreciative, believe me.”

The Z-Files is a nine-part series on Bishop McNamara football coach Rich Zinanni, who is retiring after the 47th season of his hall-of-fame co…