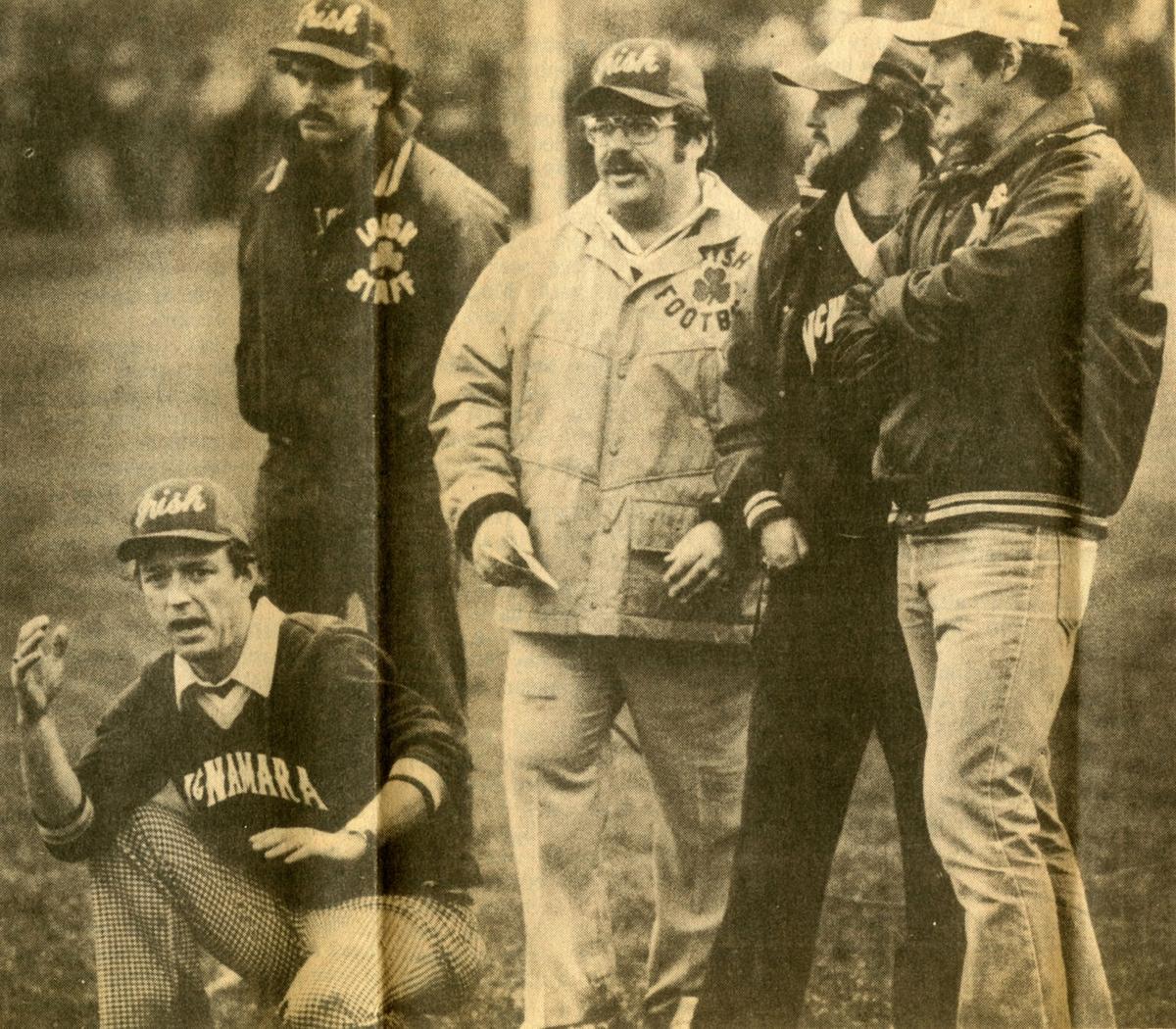 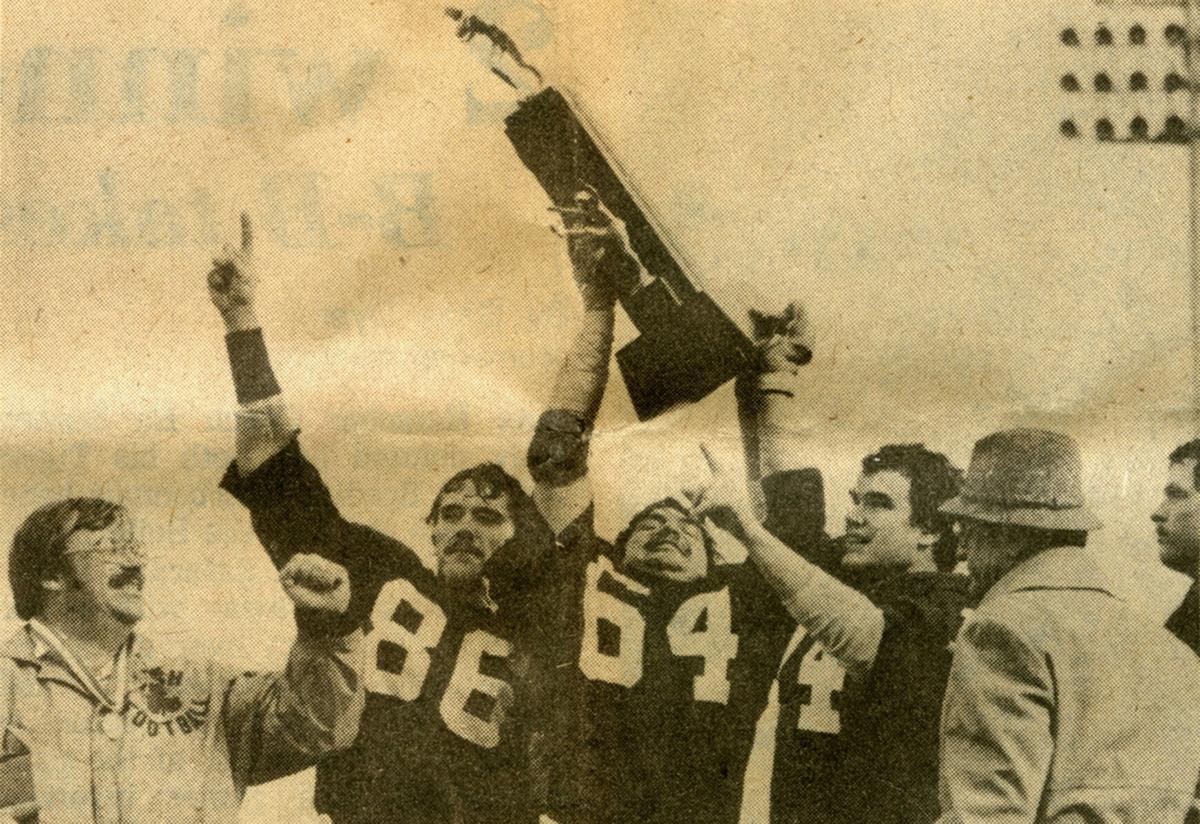 Editor’s Note: The Z-Files is a nine-part series on Bishop McNamara football coach Rich Zinanni, who is retiring after the 47th season of his hall-of-fame coaching career this fall.

When Rich Zinanni became the head football coach at Bishop McNamara in 1975, he came in at a time of change in prep football. It was the first season of overtime, something the Fightin’ Irish became one of the first teams to participate in when their season-opener in Griffith, Ind., became an overtime victory.

It was also the second season of IHSA football playoffs, something Zinanni’s Irish have gone on to qualify for 36 times since then, including five state championships in nine appearances.

The accolades Zinanni has achieved since then span far and wide, but for the member of a handful of halls of fame, it’s a mutual respect with his student-athletes that both built his successful program at McNamara and also has been one of the reasons he stuck around as a coach and teacher for 50 years.

“My thing in coaching, the first thing I want to do is show I respect the kid first,” Zinanni said. “I want to know about them, where they’re from, what they’re doing or what they might be thinking. By doing that, and giving them a little space, I’m going to get that respect back.”

One of the first players who experienced Zinanni’s coaching style was Kelly O’Connor, a freshman who hadn’t played organized football in a handful of years. When Zinanni was named the school’s head coach, he immediately reached out to the parents of incoming freshman boys.

“Rich started talking to some of our parents, and I call it the best decision I never made; I came home one day, and my dad said I was playing football,” O’Connor said. “The group I was with was a really cool, cool group. ... Once we got out there, we had so much fun.”

O’Connor and his classmates witnessed the Fightin’ Irish make their first-ever playoff appearance in 1975, where they exited in the second round of the Class 3A field.

But with players such as O’Connor at quarterback, Brian Crossley, Rory O’Connor (Kelly’s cousin), Ronnie Young, Tony Turro, Mark Cox and Keith Wojnowski, the Irish continued to build. By the time many of those players were seniors, the Irish reached their first of nine state championship games, a 14-7 loss to Geneseo in freezing rain at Illinois State University.

One of the memories etched most into Zinanni’s mind from that day was visiting what they called the “shoe room,” a room where players could use a pair of cleats designed specifically for the field at ISU, a room Mike Rude, Zinanni’s former assistant who now joins him in the Illinois High School Football Coaches Hall of Fame, never has had the fortune of making it to.

“Once you go down there and you lose, you think you’ll never get a chance to get back into the shoe room,” Zinanni said. “Mike Rude has coached as long as me, is in the hall of fame with me, and he’s never been there, and he talks about that.”

Kelly O’Connor and his classmates graduated that May, but he knew even brighter success was around the corner for what had become his alma mater.

“It was just so new and such a great thing that we got that far,” O’Connor said. “We knew [Zinanni] was good and so were the guys that were with him. ... I could not have had a better high school experience than what I had, and football was such a big part of that.”

Many of those coaches, similar to some of the teachers who had also joined McNamara during the same time, such as Ken Klipp and Donna Douglas, were friends Zinanni had met at softball games and other athletic activities. Another was Jerry Krieg, who became one of Zinanni’s most trusted assistant coaches for 24 years.

“When I first went there, we used to talk all the time about what we thought the program could become,” Krieg said. “He had a vision back even before he realized he would be head coach.

“We had awesome kids and thought we could become a program state-known, and lo and behold, there it was.”

Just a couple of years later, the Irish returned to the state championship, losing to Mt. Carmel before finally clinching their first trophy with a 17-6 win against Marquette behind the likes of Mike O’Connor, Mike VanMill, David Buck, Mark Devine and Timmy Highland.

“The town went nuts,” Zinanni said. “There were signs all over; we were brought in on fire trucks, and everyone was parading around. It was a happening time.”

Brian Hassett was a freshman when the Irish won their first title and, similar to Kelly O’Connor, grew into stardom at the quarterback position and left the program better than he found it. Hassett’s senior year was one in which he essentially had rewritten the school’s passing record book, and the Irish ran the table at 14-0 to win their second crown.

“We knew collectively as players, Rich and the coaches, as a group, that we had one goal, and that was winning ...” said Hassett, whose 247 yards in the 34-7 Class 3A title game was a state record at the time. “We had the whole package on offense, and our defense was just nasty.”

With Eugene Edman in the backfield, Darren Zinanni in the trenches along with Bob Bedell and players such as Kurt and Kevin Cassidy at the skill positions, the Irish had depth everywhere, with Zinanni noting no more than a handful of players routinely played on both sides of the football.

As the tradition started to build, the players who came after began to have more and more pride.

“Our kids took ownership of the program, and it caught fire,” Zinanni said. “They had a great work ethic based on the 1985 team.

“We had a solid staff that didn’t change, but I think it was ownership from the players that helped us go.”

The Irish followed up the unblemished 1985 year with two more state championships in 1986 and 1987.

“When we first made playoffs, you always get a phone call with who you play, where you play, what bracket, and as we became more and more noteworthy in the state, we started worrying about who the semifinal game could be for state ...” Krieg said. “We started thinking state, and that’s all we thought about — to go deep in the playoffs.

“That was [Zinanni’s] vision, and it changed the whole program. He deserves credit for getting the kids to think big.”

During that time, the Irish also became independent with a departure from the Kankakee Valley Conference. They filled their schedules with schools wide and far, including games with teams such as East St. Louis and out-of-state schools in Milwaukee and Indiana, creating a state playoff-like atmosphere each week with lengthy bus rides and crowded grandstands.

“My view on it was I told the kids every game is a state game,” Zinanni said. “We’re gonna play whoever we can with good teams, do some traveling and play nine good games.”

After their state three-peat, the Irish had an undefeated regular season in 1988 before stumbling 27-0 to Herscher in the second round of the Class 3A playoffs.

It was around that time Zinanni started reaching out to conferences in the Chicago area and vice-versa. Bishop McNamara’s principal at the time, Father Donald Lewandowski, had roots in the Chicago Catholic League, a conference he urged Zinanni to explore, something they eventually did ahead of the 1992-93 school year.

“I studied it for a couple years, started to meet some of the guys and started to think, ‘You know what, we can do this,’” Zinanni said. “... The history of the league, the Tony Lawless awards for players and coaches, the banquets with college coaches to speak, the hall-of-fame ceremonies, those are all big, dress-up things that are well-done.”

The Z-Files is a nine-part series on Bishop McNamara football coach Rich Zinanni, who is retiring after the 47th season of his hall-of-fame co…

The Z-Files: Away from the game

In this week's installment of the Z-Files, a nine-part series on Bishop McNamara football coach Rich Zinanni, the Daily Journal looks at two of Zinanni's favorite hobbies — golf and the fantasy football league he's run since 1984.

The Z-Files: Perspective through prison

In this week's installment of the Z-Files, a nine-part series on Bishop McNamara football coach Rich Zinanni, the Daily Journal looks at the year Zinanni coached and taught at Sheridan Correctional Center.

The Z-Files: Making a legend

In the first installment of the Z-Files, a nine-part series on Bishop McNamara football coach Rich Zinanni, the Daily Journal looks at Zinanni's early years through college.

The Z-Files: Fun with Rich and Jane

In this week's installment of the Z-Files, a nine-part series on Bishop McNamara football coach Rich Zinanni, the Daily Journal looks at Zinanni's 29-year marriage to his wife, Jane.

The Z-Files: The league

In this week's installment of the Z-Files, a nine-part series on Bishop McNamara football coach Rich Zinanni, the Daily Journal looks at Bishop McNamara's 24 years in the Chicago Catholic League.

The Z-Files: Moving to the suburbs

In this week's installment of the Z-Files, a nine-part series on Bishop McNamara football coach Rich Zinanni, the Daily Journal looks at Bishop McNamara's time in the Metro Suburban Conference and Zinanni's decision to retire.

The Z-Files: Leaving a legacy

In this week's installment of the Z-Files, a nine-part series on Bishop McNamara football coach Rich Zinanni, the Daily Journal looks at the legacy Zinanni will leave behind when he retires.