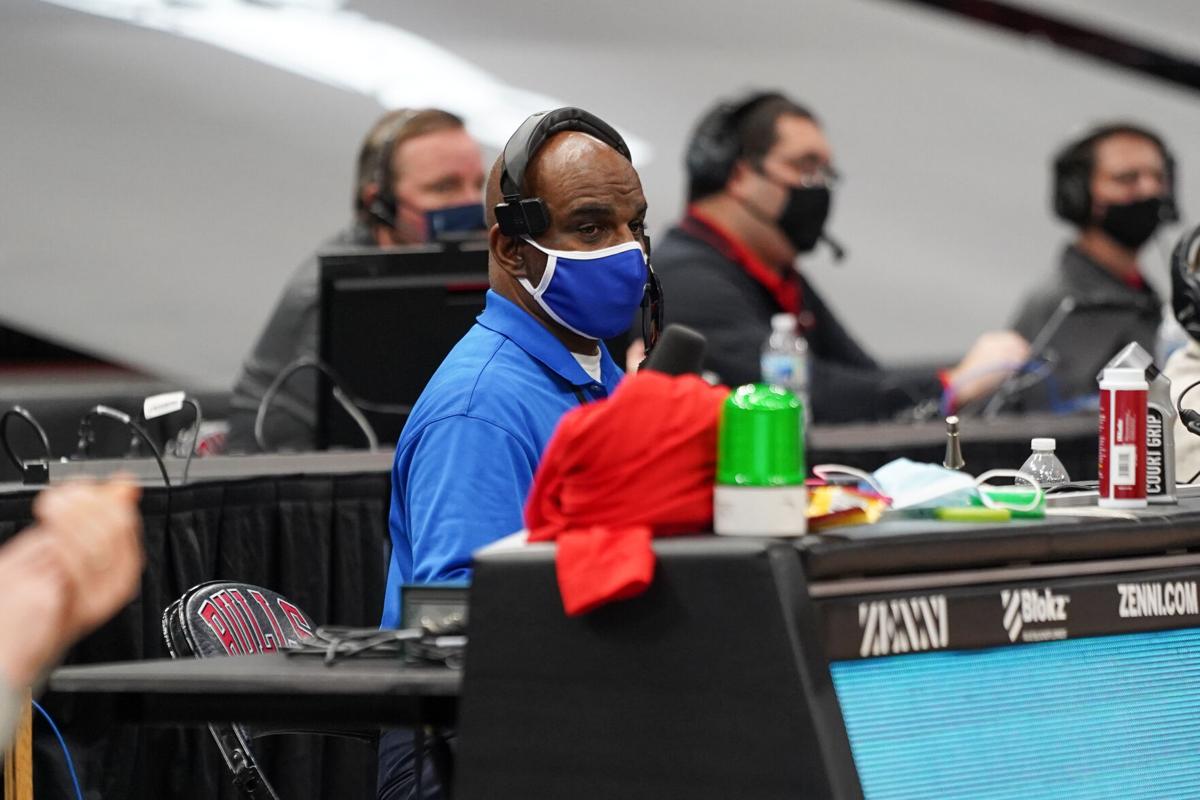 Vern Turner watches courtside as the Chicago Bulls host the Houston Rockets in an NBA game at the United Center in Chicago earlier this season. 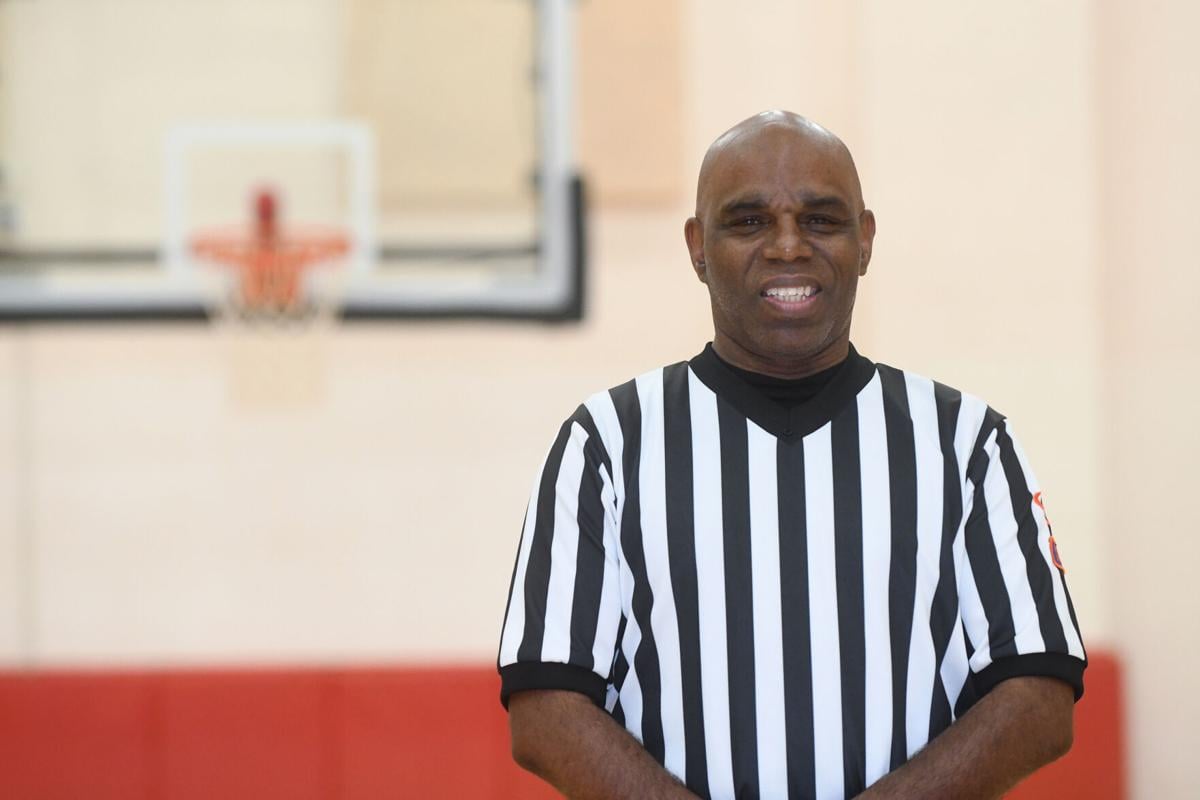 Vern Turner stands for a portrait in the gym at Kankakee Community College, where he works as a police officer between serving as a court side administrator for the Chicago Bulls. Turner, a local basketball official and IHSA Certified Clinician, has been named one of the Daily Journal’s Citizens of the Year.

Vern Turner has had a longtime relationship with basketball. A love that began playing in the parks and streets of Chicago with the likes of NBA legend Isiah Thomas has led Turner to a spot in this year’s Illinois Basketball Coaches Association Hall-of-Fame.

He’s a security officer at Kankakee Community College, and when Turner isn’t mirroring his beaming smile onto others there, he spends his evenings in several officiating roles at the high school, college and professional levels, including for the NBA as the courtside video replay administrator for Chicago Bulls home games.

Whether it’s while officiating a local high school hoops game, a walk through the halls at KCC or performing NBA-level tasks, Turner’s passion and dedication remains at a high, constant level. That’s why Turner is this year’s Daily Journal Sports Citizen of the Year.

“Being selected as Citizen of the Year is a great honor,” Turner said. “I wouldn’t be in this position without the support of my family, my fellow officials, and the great training I received from my mentor, Keith McClellan.”

Turner still keeps in touch with his first coach, Lee Johnson of Our Lady of Sorrows Grade School in Chicago. He prepared Turner for a prep career at Providence-St. Mel that concluded with spots on the Chicago Prep Conference All-State first team and the IBCA All-Star game in 1981. In 2016, Turner became the first person to ever play in and also officiate the game. And this year, he was added to the hall of fame.

Like being named Sports Citizen of the Year, Turner said his nod to the hall is as equal a credit to those who have supported him as it is for himself. And although he’s served basketball in many areas, he finds it fitting that he was inducted to the hall of fame as an official.

“I’ve put in a lot of work playing basketball, coaching basketball and officiating basketball and I didn’t really understand the game until I officiated it,” Turner said. “I was the captain of every team I played for, I coached a lot of great players. But when I started officiating, that’s when I really understood what this is all about with life skills, learning to support that young player who just lost a game they really needed to win, saying the right things to coaches.”

Between his time playing and officiating in the IBCA All-Star game, Turner has accomplished plenty on and off the court. He followed his high school career up with a college career at Culver-Stockton College in Canton, Mo., where he eventually earned a spot in the hall-of-fame in 2012.

Turner’s coaching career began at his alma mater when he took over for Providence St. Mel in 1989, where he won a pair of regional titles in his four years. His favorite win on the court was when he beat his own high school coach, Tom Shields, when Shields was the coach at Hales Franciscan. But those weren’t the wins Turner remembers 25-plus years later.

“The better win was the guys I coached,” Turner said. “A good example is Tim Ervin, now the principal and head coach [at Providence St. Mel], who was the coach when they won state in 2019. He gave me a ring to show his appreciation of getting him into coaching and teaching.”

Turner also became a police officer after college. While coaching the Knights, he was often already at the school or at another nearby, teaching the D.A.R.E. program as a Cook County sheriff’s deputy. He also spent time on the Chicago Police Department before coming to the Kankakee area six years ago, and is even known to join the neighborhood kids in games of basketball where he lives in Bourbonnais.

“It’s more diverse and people get along very well,” Turner said. “I get the opportunity to officiate a lot of basketball that’s closer to home and I’m able to teach and help.

“I love helping and talking to the kids … that’s big to me.”

For KCC athletic director Todd Post, it’s not necessarily Turner’s sports credentials he notices most, but the way he treats the students.

“He’s a great ambassador to the college, always very positive and upbeat,” Post said. “He takes a genuine liking to our student-athletes, helps them as they navigate their ways as freshmen and tries to do his part to make them feel welcome and assist them in any way.”

Turner began officiating around the turn of the century, getting his start in pro-am tournaments around the country that often featured current and former NBA players, and one tournament even included R&B star Brian McKnight.

For Turner, it was his ability to handle ruthless responses from professionals while not under the scope of an NBA game went a long way in his development as an official and was a great boost to his young resume, which really took off when he became a certified IHSA official 18 years ago.

“All of the NBA assigners back then would come to watch because if you could handle those games, they knew you could handle NBA games. I was getting ready to get hired by the [Continental Basketball Association] before it folded so then I started going to high school camps.”

Turner has officiated high school and college basketball since 2003, which is when he began coaching AAU ball as well. His AAU time ended in 2009 and that’s when Turner turned it up a notch as an official.

“He’s super professional and very much committed to his craft which at high school and college level is so important,” John Taylor, one of Turner’s officiating partners, said. “He’s committed to it and has a passion for it and you can see that reflected in not only how he performs his duties but his impact on and off the court.”

Turner also dedicates time to younger officials as the president of Top Notch Officials Training and Development and supervisor for the Chicago Prep Conference for Officials, on top of being an IHSA clinician since 2015.

In 2019, Turner and Top Notch also started the Top Notch Mental Health Awareness Challenge, a tournament held at KCC that pits schools from Turner’s native Chicago and pits them against local schools, while also bringing in local organizations to educate student-athletes about topics outside the lines.

“It’s very big to me because it’s the community I live in,” Turner said. “We don’t just make it about basketball or officiating, but about life skills and traits for these young people to pick up, talking about different things that may go on in their life and how they can have resources for those things.”

The tournament was canceled due to COVID-19 this year but is expected back in 2022.

While the tournament, and all of prep basketball in Illinois, has been on pause this season, the NBA has kept going, and Turner has been courtside as part of the action. He’s worked as a training camp official for the Milwaukee Bucks for eight years and is now in his second season as an NBA courtside administrator for Chicago Bulls home games.

As courtside administrator, Turner serves as the eyes and ears between the officials working he game and NBA replay offices in Secaucus, NJ. Jason Bleznick, manager of basketball operations for the NBA, said that Turner’s position isn’t one that can be applied for, but rather asked to fill, and Turner was without a doubt the NBA’s guy for the job when it became available.

“When you get recommendations from the guys we talk to in the NBA, that’s the seal of approval,” Bleznick said. “We came running to Vern and I wouldn’t say there was too much competition ... he has that kind of reputation among the basketball world.”

Turner said had he gotten started in officiating sooner, he would have loved to have been an NBA referee, but working courtside is a close second to that.

“The people around the [scorer’s] table all great people and we help each other and support each other,” Turner said. “And the knowledge you learn at that level, you can take anywhere — the professionalism, the know-how of the game, the respect given to you as being an NBA official, you can take that anywhere.”

With such a busy schedule, Turner certainly doesn’t have to officiate a local high school game during a Bulls road trip. He doesn’t have to work with younger officials when he gets home from KCC. But he remembers those who helped him and wants to pay that forward.

“I go back to my coaches and think about all the things they did for me and I get a little emotional because they’ve done a lot,” Turner said. “They gave back and showed me the way to give back to others and do things for kids.

“I got those opportunities and had people to direct me on a proper path and I just want to help others.”