Skip to main content
You are the owner of this article.
Edit Article Add New Article
You have permission to edit this article.
Edit
Home
News
Sports
Opinion
Life
Obituaries
HomeFinder
Jobs & Classifieds
Lifestyles of Kankakee County
1 of 4 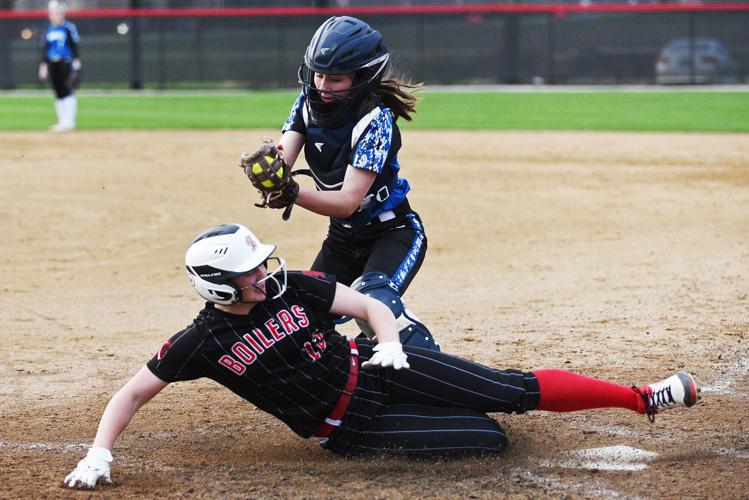 Bradley-Bourbonnais’ Ellie Haggard slides into home plate as Central catcher Katherine Winkel looks to apply a tag during a game this season. Haggard was named the Daily Journal Softball Co-Player of the Year. 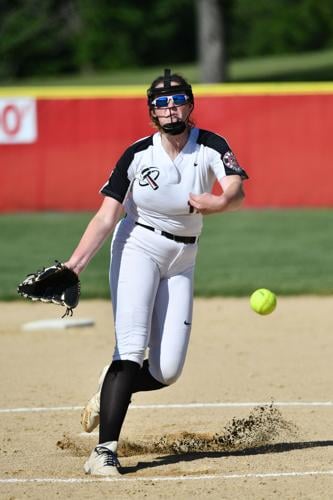 Bradley-Bourbonnais’ Libby Spaulding throws a pitch in the IHSA Class 4A Pekin Sectional championship against Edwardsville. Spaulding was named the Daily Journal Softball Co-Player of the Year. 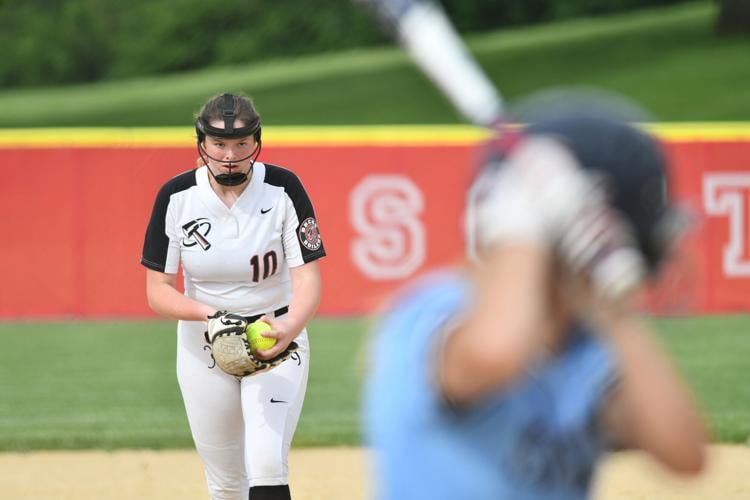 Bradley-Bourbonnais’ Libby Spaulding prepares a pitch during her no-hitter in the Boilermakers’ 8-0 victory against Plainfield South in the IHSA Class 4A Pekin Sectional semifinals this season. 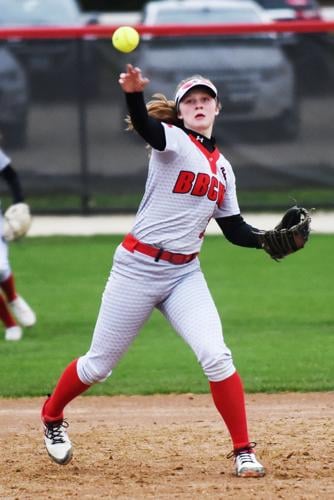 Bradley-Bourbonnais’ Ellie Haggard throws the ball to first base during this season’s 8-2 home victory against Bolingbrook. Haggard was named the Daily Journal Softball Co-Player of the Year.

Bradley-Bourbonnais’ Ellie Haggard slides into home plate as Central catcher Katherine Winkel looks to apply a tag during a game this season. Haggard was named the Daily Journal Softball Co-Player of the Year.

Bradley-Bourbonnais’ Libby Spaulding throws a pitch in the IHSA Class 4A Pekin Sectional championship against Edwardsville. Spaulding was named the Daily Journal Softball Co-Player of the Year.

Bradley-Bourbonnais’ Libby Spaulding prepares a pitch during her no-hitter in the Boilermakers’ 8-0 victory against Plainfield South in the IHSA Class 4A Pekin Sectional semifinals this season.

Bradley-Bourbonnais’ Ellie Haggard throws the ball to first base during this season’s 8-2 home victory against Bolingbrook. Haggard was named the Daily Journal Softball Co-Player of the Year.

Since their youth softball days, Ellie Haggard and Libby Spaulding have played up in age group, which allowed the pair of Bradley-Bourbonnais sophomores to comfortably fit into the Boilermakers at the varsity level when they were just freshmen a year ago.

That early experience allowed the pair to gain rare, valuable experience from a young age against some of the region’s best in the SouthWest Suburban Conference, as well as the experience of agony that came with a premature exit in the regional semifinal round last spring.

With that experience — and motivation — in their back pocket, the pair of sophomores brought their levels up another notch, as Haggard, a slugging shortstop, and Spaulding, an intimidatingly confident southpaw with a bat as big as her arm, led the Boilermakers to the sectional finals for the third time ever this season, and earned the title of Daily Journal Co-Players of the Year in the process.

Their coach, Haylee Beck, said that both players have different methods to their madness, but both were equally effective as young leaders of a Boilers squad that finished the season with a 23-10-1 record.

“Libby is very calm, cool and collected; you can’t really see when Libby is rattled and that’s what’s going to allow her to continue to grow,” Beck said. “Ellie loves to have a sense of humor in everything that she does; she loves to joke, loves to stay loose and brings that mindset to whatever she focuses on.

The 23rd win of the Boilers’ season came in the IHSA Class 4A Pekin Sectional semifinals, an 8-0 victory in which Spaulding threw a no-hitter and homered, as part of a red-hot postseason run she had that began with a 34-inning scoreless streak.

Spaulding has begun to look back fondly on the season that just ended, while keeping the same season-ending edge she and her teammates had when last season finished after this spring ended with a 10-0 loss to Edwardsville in the sectional championship.

“It honestly makes me feel happy,” Spaulding said. “Even though the end of the year was good because we performed well, it just makes me look forward to having the next two years even more.

“I can’t wait for next year to go even further.”

On the season, Spaulding went 19-8 with a 2.19 earned run average and 193 strikeouts over 169 1/3 innings. Her strikeouts and innings were the most in the area, while her wins were tied for the best in the area and her ERA was third in the area.

But she didn’t leave her dominance in the circle. At the plate, Spaulding proved to be a nightmare for opposing pitchers, as she totaled a .396 batting average with 11 homeruns, second in the area, 26 RBIs and an impressive 1.283 on-base plus slugging percentage.

“A lot of people at first just notice me as a pitcher and when they see something about my hitting, they’ll be like, ‘I didn’t know you could hit,’” Spaulding said. “They’re very shocked and that makes me feel good about myself.

The only reason Spaulding, an All-SouthWest Suburban Conference pick and third-team choice for the Illinois Softball Coaches Association Class 4A All-State team, didn’t lead the area in dingers is because of her co-player of the year, who socked a whopping 16 bombs this spring.

In addition to her gaudy homerun total, Haggard also had 53 hits, second in the area, to the tune of a .473 average. The SWSC Red Division Player of the Year runner up and ICA second-team All-State selection also racked up the area’s third-best RBI total, 44, the fifth-best run total, 52, and finished with an almost unimaginable 1.566 OPS.

As teams started to form a scouting report on the slugging shortstop, Haggard said she has kept up her work in the cage to work on whatever part of her game teams are trying to expose in attempt to stay a step ahead.

“I think my worst pitch is different every single game, so when I go to the cages, I work on all of them,” Haggard said. “Sometimes an outside pitch I can’t hit as well, or slow pitching is my struggle, so teams, starting in travel ball, tried to pick up on that.”

Whether it was Haggard, Spaulding, junior catcher Natalie Johnson and her 10 homers or any other Boiler, those big hits always seemed to ignite the team and crowd alike.

“To know when you see it off the bat, it’s already gone, is a great feeling,” Beck said. “I enjoy watching the kids succeed like that because I not only have a nice view to watch them hit it, but I have a unique view to see the dugout, and their parents and friends in the stands, and watch them all celebrate.”

The frequency of those celebrations helped give Spaulding the hint of confidence to her game that Haggard ironically admires most about her teammate, since Spaulding said much of that confidence stems from knowing she has thumpers like Haggard to support her.

“It’s easy for me to feel confident,” Spaulding said. “If a team scores three runs, I know Ellie is coming up in the lineup soon, and she’ll have my back and put it in play.

“Every time Ellie was up, I knew something good was about to happen.”

The pair still has another two years to continue growing together and working together towards their goal of continuing the program’s resurgence. But, as they’ve already seen through their freshmen and sophomore seasons, those years will go quickly, and the duo are making sure to cherish every moment along the way.

“Before high school started, my dad always told me it went fast and I never believed him, but now I kind of do,” Haggard said. “My freshman year especially went really fast because of COVID, but I’m excited for these next two years.”

From Beck’s perspective, the next two years definitely include larger goals than the last two, but that won’t let her lose focus of what matters most in high school softball.

“Our group message photo at the beginning of the season was a regional plaque, and now our goals are bigger than that,” Beck said. “We’ll continue to climb each year while understanding they’re high school girls.

“I’m excited to go out to dinner with them, take them to breakfast with my grandma, take them to local games in the area, they go swim at each other’s houses,” she continued. “That stuff is just as important as anything on the field.”

Check out this year's Daily Journal All-Area Baseball and Softball teams, as well as stories on Baseball Player of the Year Abram Wills (Coal …

Some of the best photos from the sports games and tournaments of local teams.

Some of the week's best photos from local news stories.

Some of the week's best photos from local sports games and competitions.

Some of the week's best photos from local sports games and competitions in early May.