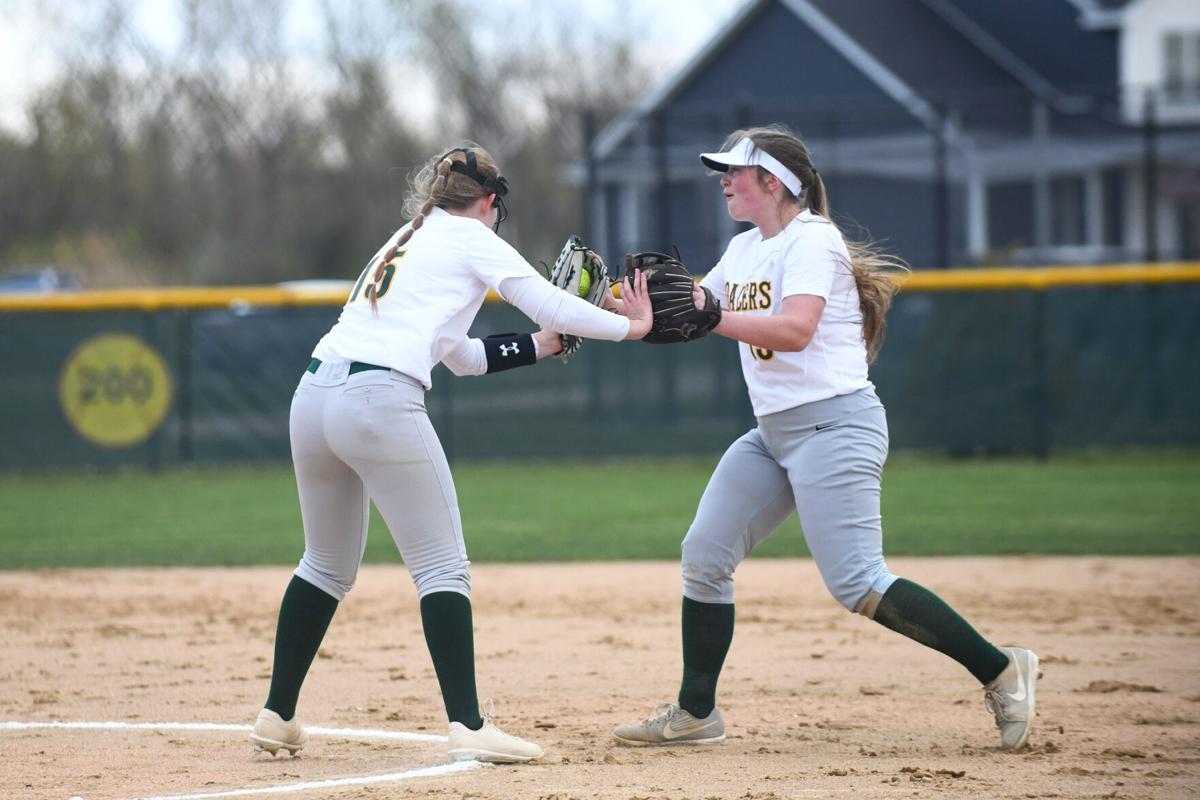 Coal City first baseman Kerigan Copes runs to celebrate a strike out with pitcher Kaitlyn Jasper, left, on Tuesday during the Coalers' 14-4 victory against Reed-Custer. 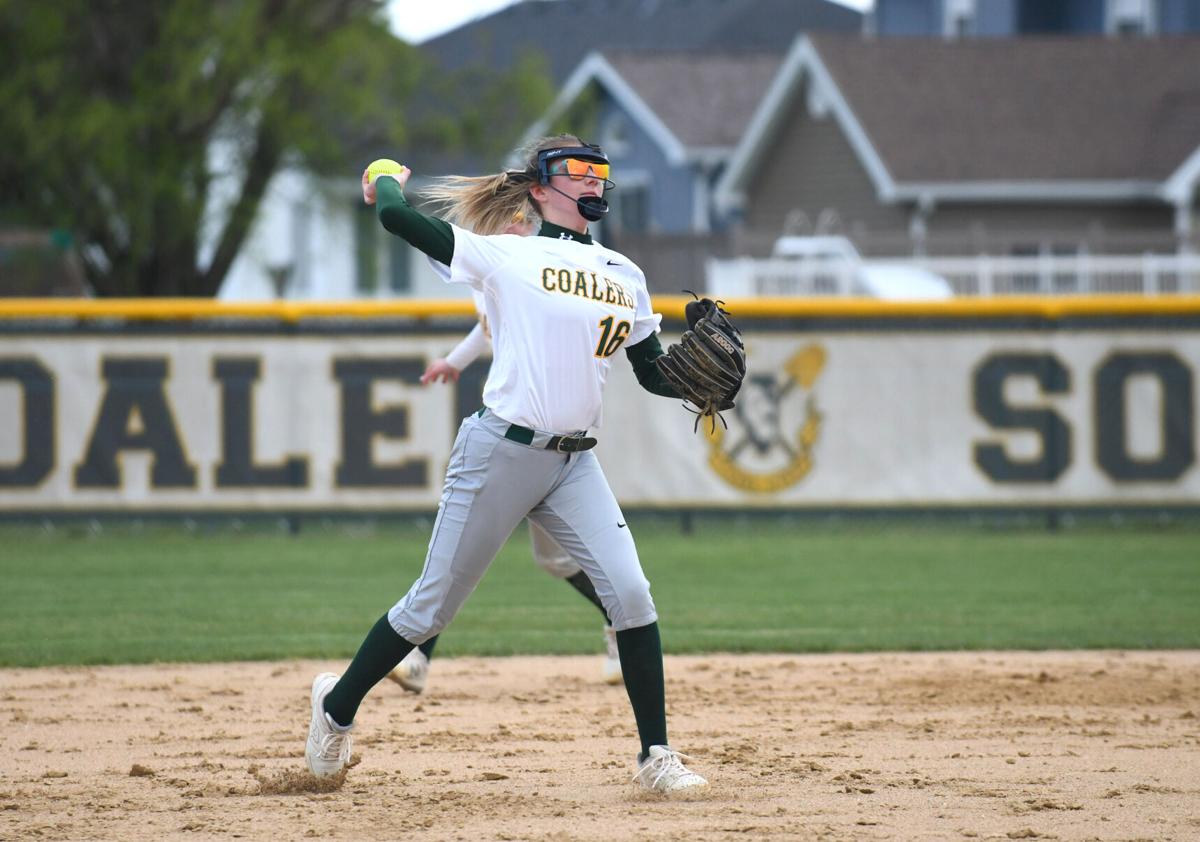 Coal City's Abby Gagliardo throws to first base for an out Tuesday during the Coalers' 14-4 victory against Reed-Custer. 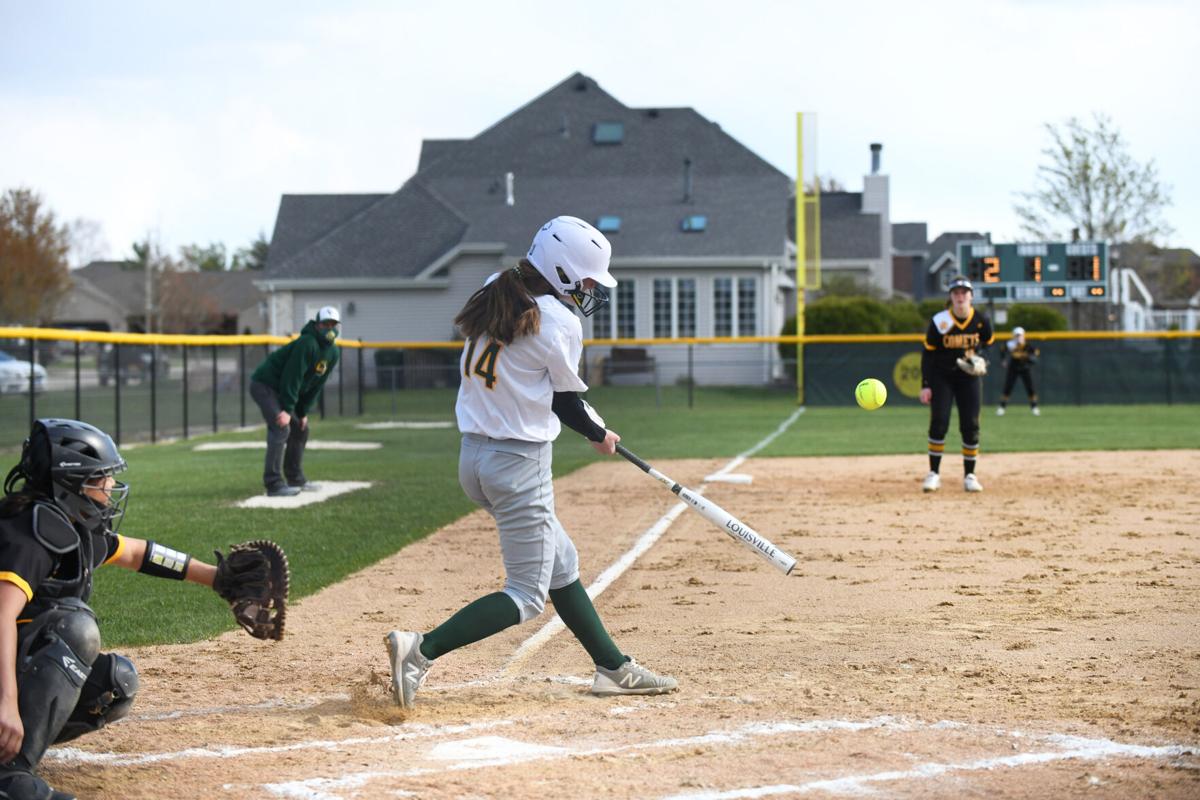 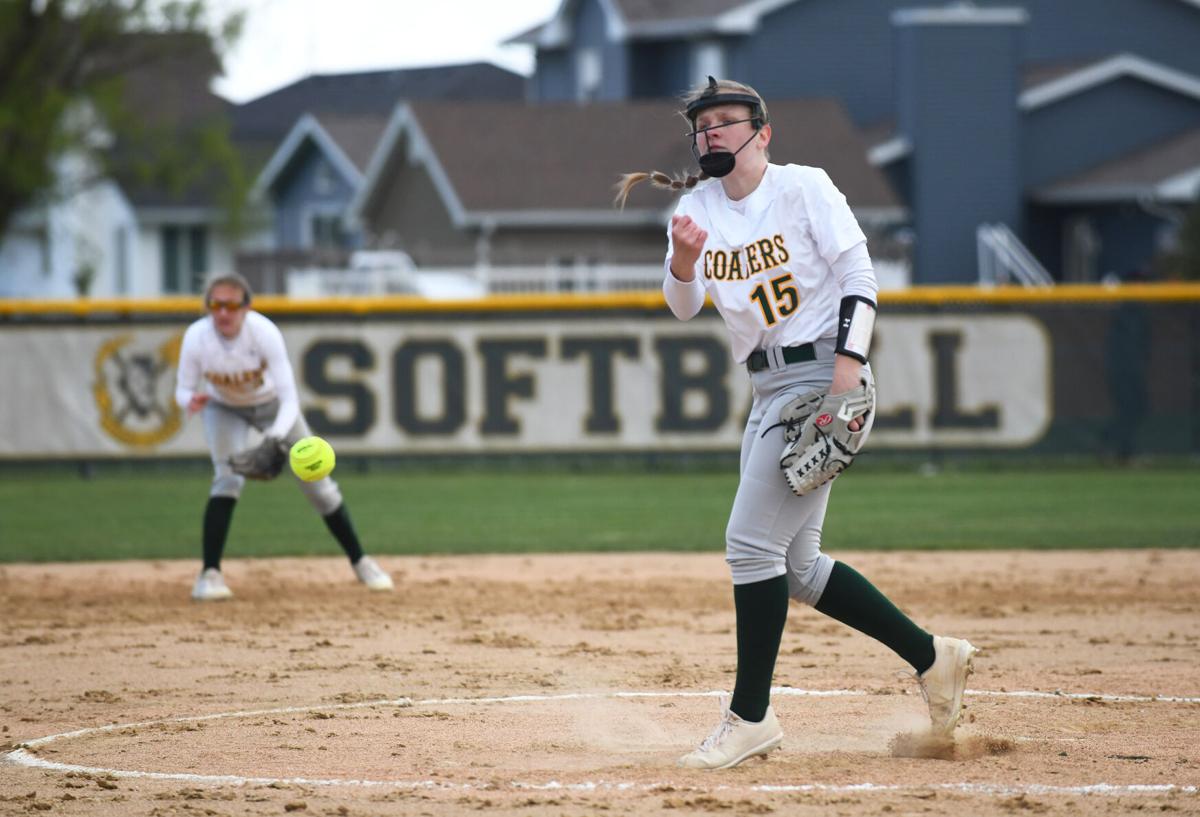 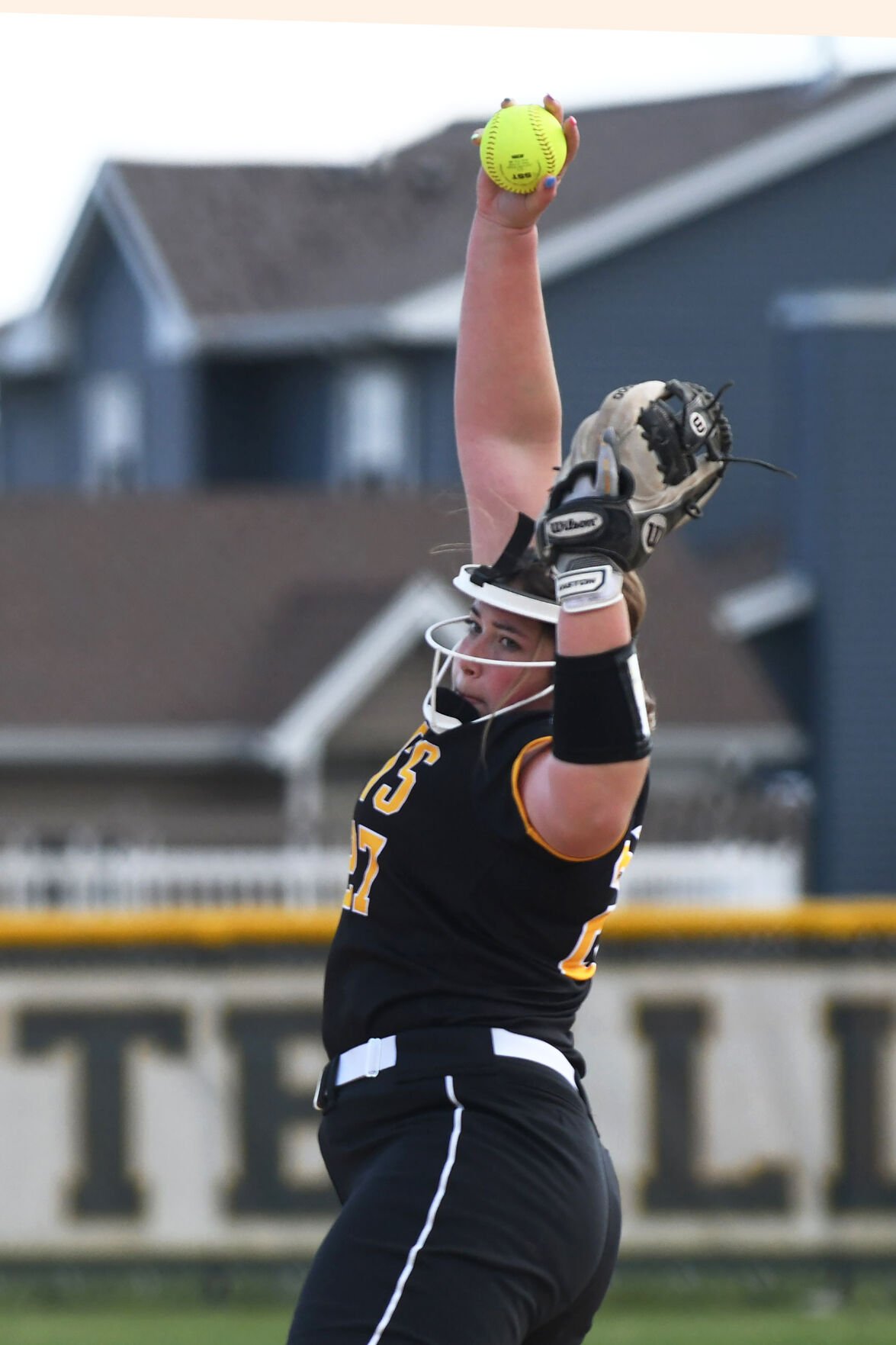 Reed-Custer pitcher Grace Moyers winds up for a pitch Tuesday during the Comets' 14-4 loss to Coal City.

Coal City first baseman Kerigan Copes runs to celebrate a strike out with pitcher Kaitlyn Jasper, left, on Tuesday during the Coalers' 14-4 victory against Reed-Custer.

Coal City's Abby Gagliardo throws to first base for an out Tuesday during the Coalers' 14-4 victory against Reed-Custer.

Reed-Custer pitcher Grace Moyers winds up for a pitch Tuesday during the Comets' 14-4 loss to Coal City.

The Coalers scored five runs in the first inning to build an early lead and then scored in every inning thereafter to 10-run their Illinois Central Eight rivals. Kerigan Copes was a perfect 4 for 4 with four RBIs and a run. Makenzie Henline had three hits, three RBIs and a run.

Halie LaGrange was 3 for 3 with a run and an RBI to lead the Comets. Mya Beard had a double and scored twice.

The Panthers notched six runs in the first two innings before going on to route Peotone. Alyssa Dralle went 3 for 4 with a team-high three RBIs to lead Manteno’s explosive offense. Kayla Michalesko and Reygan Carlile each added two hits. Dralle improved to 1-0 on the mound, giving up one earned on five hits with 13 strikeouts in seven innings of work.

The Tigers made quick work of the Wildcats. Colby McDivitt (2-0) picked up the win after tossing a complete game with seven strikeouts. Rylie Hartman and Mia Ruder led the bats with a team-high three hits each.

Tied 1-1 in the third inning, the Panthers went on to score four runs between the fourth, fifth and sixth innings. Eric Beck, Edan Perez and Grant DeRose totaled two hits each to lead Manteno at the plate. Luke Trepanier used his speed to steal a team-high two bases.

Connor Janik and Matthew Derkacy recorded the only two hits on the evening for the Blue Devils.

Tyler Johnson and Tyler Jackson each picked up straight-set victories to lead the Coalers in singles play. Coal City’s duo of Alex Gernenz and Cristofono Ferrara snagged the only doubles play victory in straight sets.

Anyia Killis assisted Luz Sandoval for the Bobcats’ only score of the evening. Chloe Zurek and Carly Paulmeir combined for 15 saves behind the net.

Narjis Mzibri, Heidi Moyo and Mia Schwada each won their singles matches in straight sets. Moyo and Nirva Patel also picked up a 6-2 victory in doubles.

Reigning CCAC Player of the Week Alli Davis continued her hot-streak by hammering a two-run homer in the third. Sara Beers, Katie Marker and Miranda Southall each added a team-high two hits. Southall picked up the win on the mound, giving up zero earned runs on six hits in seven innings of work.

The Tigers never recovered from their five-run deficit in the first inning. Sara Beers went 3 for 4 with an RBI to lead Olivet at the plate. Margaret Landis added two hits and an RBI.

A three-run first inning was more than enough run support for Jack Stellano in Reed-Custer's first win over the Coalers since 2014.

On this week’s Daily Journal Prep Podcast, Mason Schweizer is joined by a pair of spring sports coaches who helped their teams earn conference…

GAME OF THE WEEK: Kankakee at Crete-Monee

The Kays have a chance to win the school's first Southland Athletic Conference football title when they visit Crete-Monee Saturday.

Once they graduate in May, Central's core group of seniors will begin to go their own ways. But first, they have their eyes set on ending their football careers by winning the last-ever SVC championship.

The Kays celebrated the first home victories for their new baseball and softball coaches Monday.

Herscher overcame an early 10-3 deficit by racking up 14 hits with runners in scoring position in a wild, windy matchup with Peotone Monday.