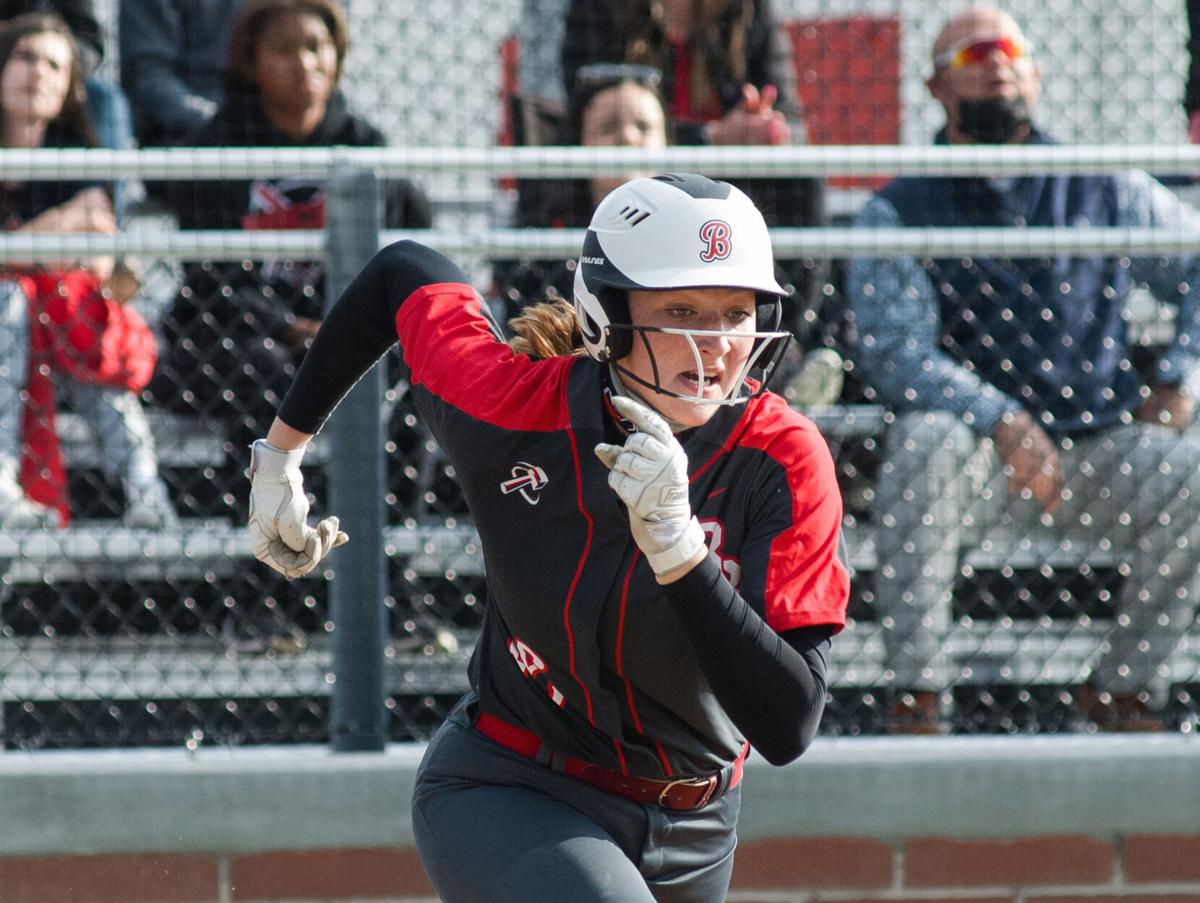 Bradley-Bourbonnais' Natalie Johnson legs out an infield hit in the third inning of Thursday's game against Peotone. 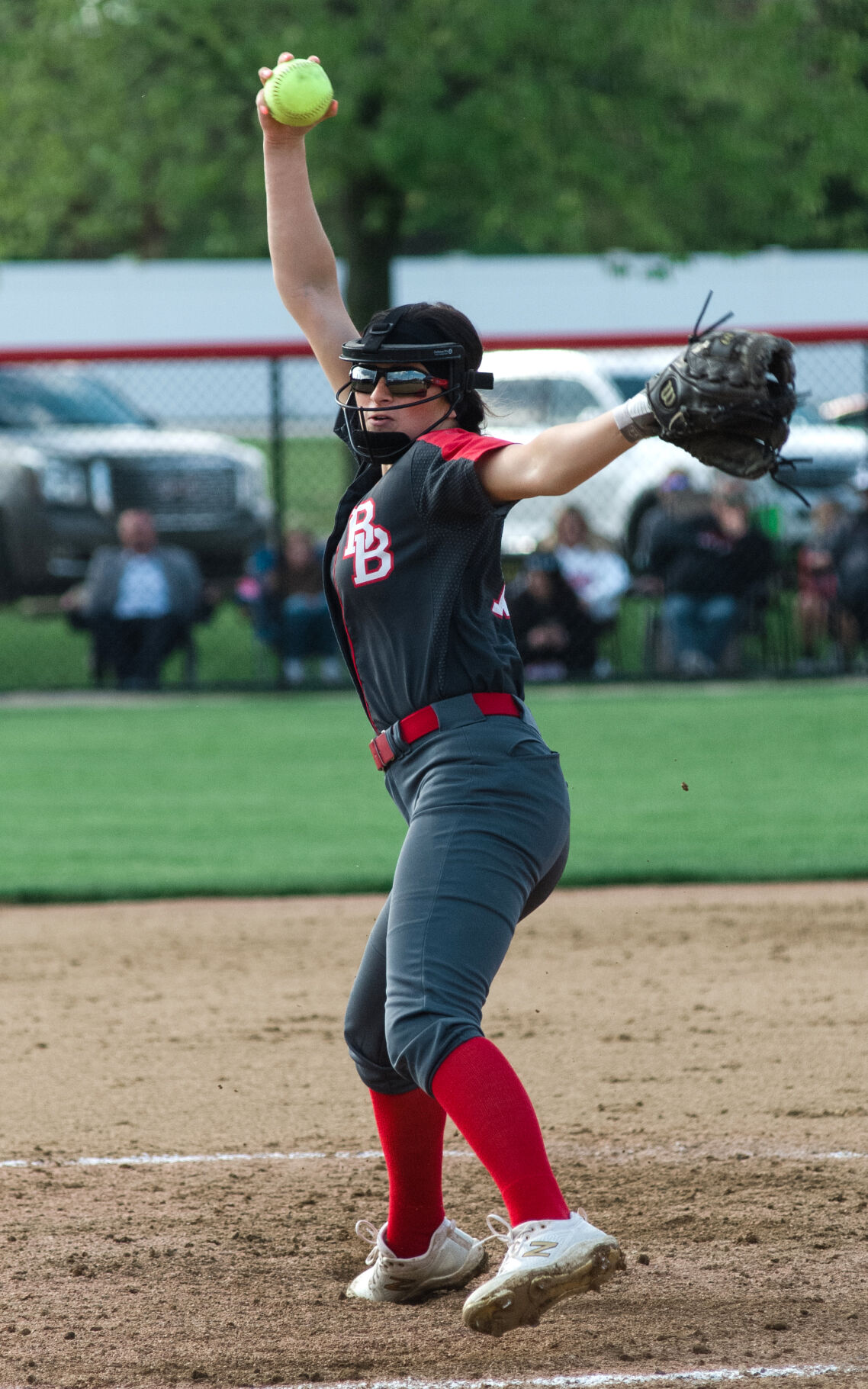 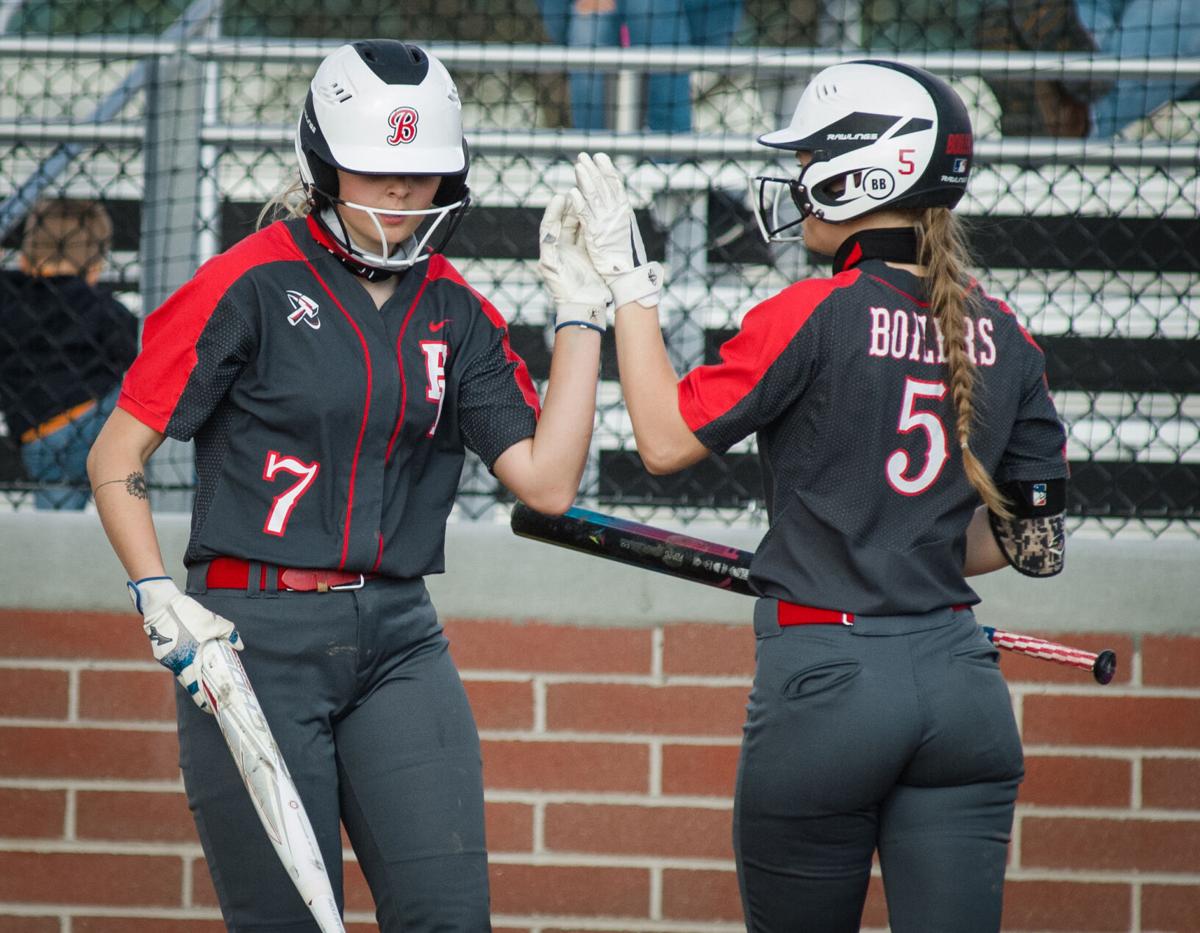 Bradley-Bourbonnais' Maddy McIntyre (7) is greeted by Addison Talbot after scoring in the fourth inning of Thursday's game against Peotone. 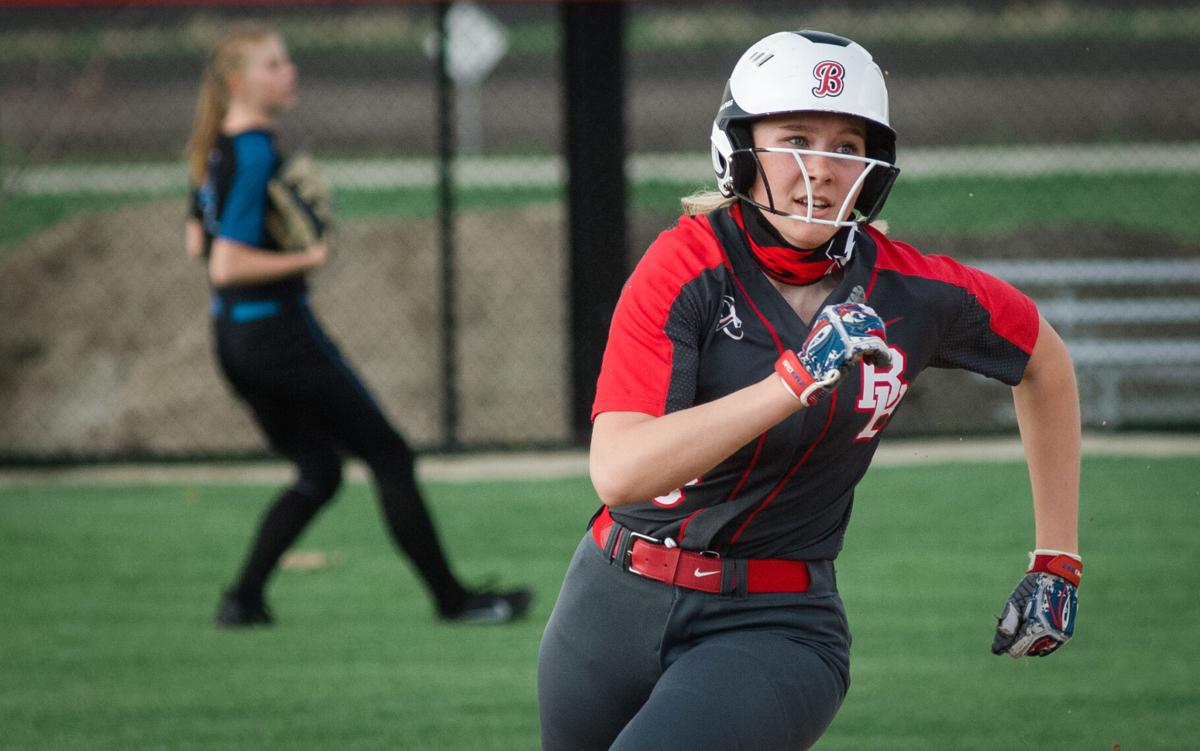 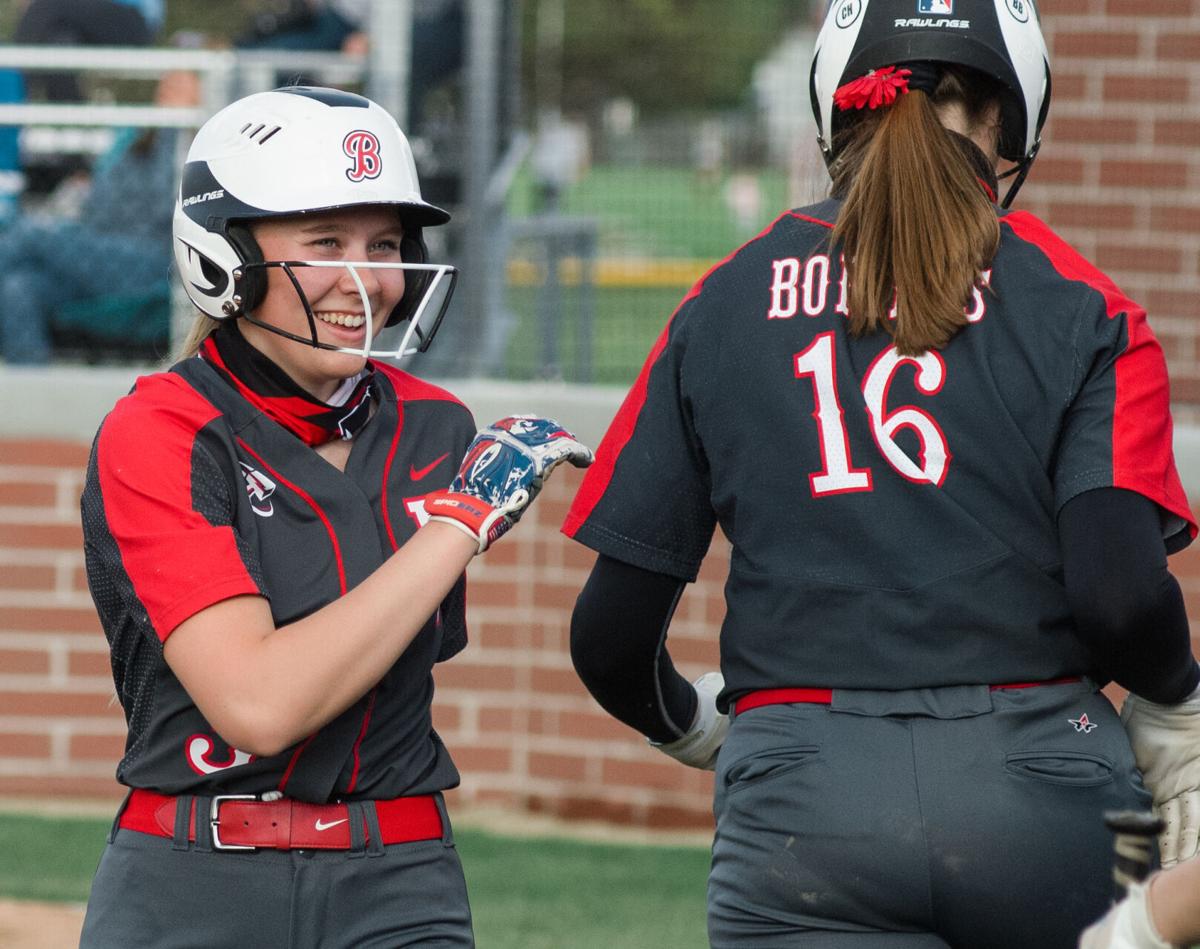 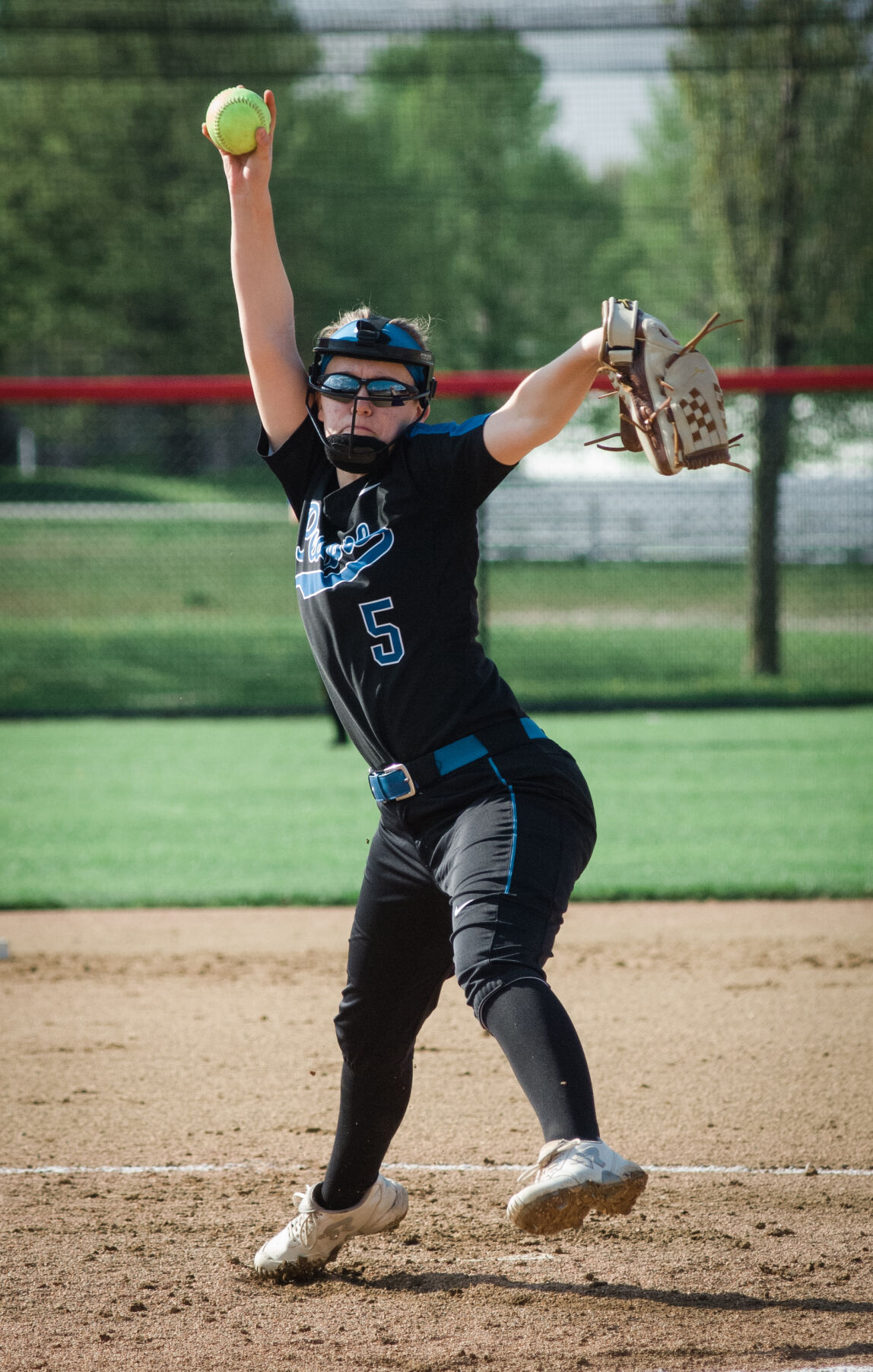 Bradley-Bourbonnais' Natalie Johnson legs out an infield hit in the third inning of Thursday's game against Peotone.

Bradley-Bourbonnais' Maddy McIntyre (7) is greeted by Addison Talbot after scoring in the fourth inning of Thursday's game against Peotone.

After Wednesday’s heavy rains forced Thursday’s game south from Peotone to Bourbonnais, the Boilermakers took advantage of an extra home game with a four-run first inning, sparked by a two-run homer from Natalie Johnson, and did more damage with a five-spot in the fourth for an early victory Thursday.

That was more than enough run support for senior pitcher Kennedi Pepin, who surrendered two hits and a walk while striking out six in the five-inning complete game.

Despite the lack of a 2020 season because of COVID-19, Pepin still has experience at the varsity level dating back to the postseason of her freshman year in 2018, something Boilers coach Haylee Beck sees paying dividends this season.

“Pepin’s someone who has been around for a while. ... She’s had so much experience at this level that, even on days where she doesn’t have her best stuff, she still finds a way to compete,” Beck said. “She has a competitive fire that not many women have.”

It was the team’s fourth victory at their renovated home field in Bourbonnais, a place Beck said her squad has really come to enjoy and take a sense of pride in.

“We love it; it’s just a place of pride for our girls now,” Beck said. “At our first home game, there was a [Bradley-Bourbonnais Youth Softball League] going on behind us, and to see a bunch of 8-, 9-year-old girls come up into the stands and get that excited about their future home, that was awesome to see.”

Grace Vowell and Emma Herder each collected hits for the Blue Devils.

A three-run first for Momence set the stage for Thursday’s Sangamon Valley Conference win. Aubrey Ogibovic doubled, scored twice and earned her first pitching win of the year. Sadie Singleton and Emilie Lindgren were each 3 for 5, and Singleton added a pair of doubles and a pair of RBIs. Kaitlyn Piekarczyk had three hits and scored three times.

Shayna Lehmkuhl singled twice and drove in a pair for the Comets. Alana Pourroy had an RBI single. Kaylee Ketcherside scored twice, and Emma Skeen singled and scored.

After a scoreless first, the Bearcats crossed the plate at least once in each of the next four innings for an abbreviated victory. Emmaleah Marshino was 2 for 3 with a double, three RBIs and a run. Abby Storm also had two hits, three RBIs and a run. Jordin Lucht, Hunter Mowrey and Abbey Tovey all had two hits and at least one run and RBI apiece. Julia Bushnell pitched all five innings, allowing two hits and striking out one.

Kayden Stahlschmidt had a pair of hits for Donovan, and Dayla Catillo also had a hit.

The Dragons celebrated a walk-off win on a two-run single by Miranda Keller. Brooke Veldhuizen added three hits, including a double, two runs and an RBI. Delaney Malkowski tripled and scored, and Molly Markland had an RBI double.

Emily Wilkinson had a two-run double for the Cardinals, who also got a two-run single from Emma Tolly. Sophia Torres struck out seven in seven innings of work and added a double at the dish.

T Sykes went a perfect 3 for 3 with three RBIs and a run scored to finish as the Boilermakers’ top hitter on the evening. Trevor Walters recorded two runs scored, a hit and an RBI. Brock Spaulding went 4 1/3 innings, giving up two earned runs on seven hits with three strikeouts to notch the win on the bump.

Brock Krska went 2 for 4 and an RBI to lead the Blue Devils at the plate. Mason Kibelkis chipped in an RBI and a run scored. Tyler Hendricker added a double.

The Irish fought hard but fell a tad short, moving to 2-3 on the season. Nolan Czako, Caden Martin, Jack Baud and RJ Dolton all managed multiple hits with two each. Baud took his first loss on the mound in four innings of action.

The Panthers put up a five-run first inning to help push themselves past the Bobcats. Cole Jackson notched three hits with three runs scored. Nolan Aicher added two hits and an RBI. Ethan Pequette got the win in three innings of action on the mound, giving up zero runs on zero hits with eight strikeouts.

Jacob Graniczny totaled two of Beecher’s five hits on the evening to lead the Bobcats. Duane Doss, Davis Arroyo and Cameron Paulmeier also chipped in one hit each.

Devon Lamie went 2 for 3 with a run scored to lead Grace Chirstian. Anthony Blake went 1 for 3 with an RBI. Francicso Cintora and Eric Savoie each added doubles.

Ryan King went 2 for 3 with two RBIs to help the Timberwolves snag a three-run victory. Bryce Sluis added two hits and one run scored. Gavin Spitz chipped in a team-high two steals. Sluis also picked up the win in four innings of action on the mound.

Caden Schroeder, Ryan Turner and Dawson Sulaica totaled all of the Trojans’ hits on the evening with one each. Jack Denker chipped in Dwight’s only RBI.

Braiden Walwer totaled half the Warriors offense with two hits. Brayden Haines and Justin McGahan also recorded one hit each.

The Panthers improved to 4-1 on the season with a comeback victory against Woodland. Blake Huston and Aiddan Daugherty totaled a team-high three hits each. Cayden Landry chipped in three RBIs, a stolen base, one hit and a run scored. Bryce Handzus tossed a complete game with eight strikeouts to record the win on the bump.