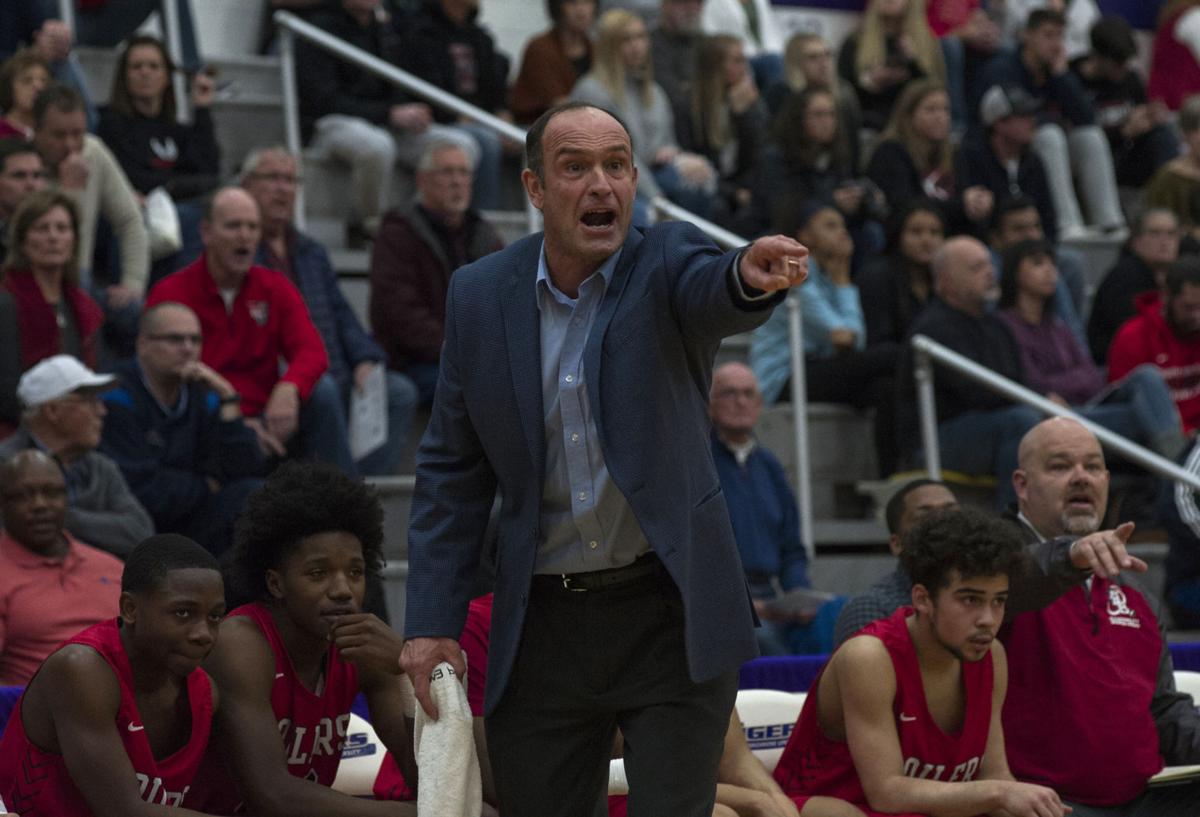 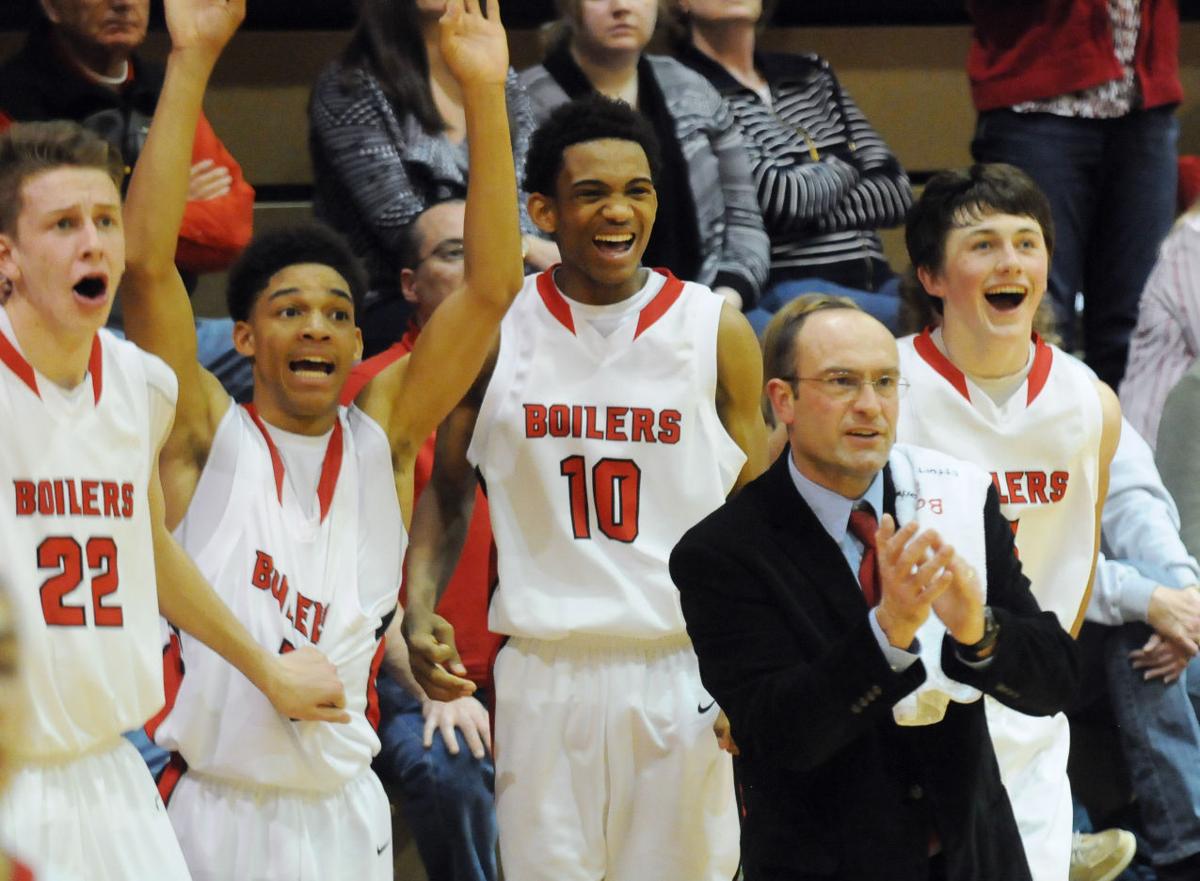 Bradley-Bourbonnais' head coach Alex Renchen cheers along with his starters, who were benched after the Boilermakers reached a 20-point lead, as his bench players grab fourth-quarter points during the Boilermakers' 78-54 victory against Thornridge in 2015.

Bradley-Bourbonnais' head coach Alex Renchen cheers along with his starters, who were benched after the Boilermakers reached a 20-point lead, as his bench players grab fourth-quarter points during the Boilermakers' 78-54 victory against Thornridge in 2015.

Alex Renchen’s house still hosts a landline phone, a symbol reminiscent of the longtime area coach’s decade and a half spent as the boys basketball coach at Kankakee in the 1990s and 2000s.

During his coaching career, which began at the varsity level with the Kays in 1993, Renchen passed out the number to that landline for anything his players might have needed. A self-described man of few words, Renchen effectively communicated how he feels when that very same home phone continues to ring with calls from players who now are almost as close to retirement as they are to their high school days.

“Humbled. I’m truly humbled,” he said while holding back a tear.

A 1984 Manteno graduate who continued his basketball career at Kankakee Community College and the University of Central Missouri, Renchen knew he wanted to be a coach long before he actually became one.

“When I was in sixth, seventh grade, I said I just wanted to be a basketball coach,” Renchen said. “I saw all those good games on CBS back in the day, and it was something I wanted to do.”

He got that wish upon his graduation, working his way up from the junior high ranks, as well as a little time on the bench at Kankakee Community College, where he both coached and played for the legendary Denny Lehnus.

Lehnus, who described Renchen as hard-nosed, competitive and one with a strong work ethic, said those assessments assured him Renchen would become successful in whatever professional path he pursued.

“I thought he’d be successful in whatever he did because of those traits,” Lehnus said. “Then, I knew he was gonna be a good coach when I saw his work ethic and ability to work with kids.”

Finding success with the Kays

During his tenure at Kankakee, the Kays were crowned Southern Inter-Conference Association champions six times and were IHSA Class AA Regional champions in 1996-97. And wherever the competition was, Renchen and his squad found themselves there.

“We played everyone there was to play — we went to Rock Island for Thanksgiving, Quincy for Thanksgiving, Westinghouse — we played anyone with a name, and as I look back, I think about just the incredible amount of work that went into it, with the kids and the coaching staff,” Renchen said. “On a typical day in the summer, we started at 8 a.m. and went until 3 p.m. with high school, kids camp and then games at night.

“I just saw an incredible amount of effort and enthusiasm exhibited by the basketball community that we had and the coaches we had.”

For Ron Jones, a 2000 Kankakee grad who played in college at both KCC and Southern Illinois University Edwardsville, Renchen’s intensity as a coach provided the example he and his teammates needed for their own ferocity on the court.

“It was a hard-nosed, man-to-man, in-your-face pressure defense,” Jones said of his team’s identities under Renchen. “I was a 6-foot-3 shooting guard and the second-tallest guy on the team. We didn’t have a lot of size, but what we did have was toughness and pressure.

“We pressed and made a lot of other teams uncomfortable because the style of defense that we played.”

Jones said some of those lessons Renchen taught through his intense coaching style might not have been realized at the time but have grown to be more appreciated as time has passed.

Marcello Robinson, Jones’ teammate and classmate who played at Bradley University and spent the past season as an assistant for Renchen and the Boilers, echoed Jones’ sentiments in that regard.

“When I was in high school, I thought he was just tough on us, but I’ve come to realize he’s very passionate and wants us to first be a better man and a better player second,” Robinson said. “I think that’s missing now, where coaches sometimes only care about winning. But with Renchen, he cared about raising us to become better men, and I’ve seen that with multiple people from high school.”

Jones and Robinson speak for a healthy majority of Renchen-coached players — they either appreciated the lessons he taught them in real time or in the time that has passed since. That’s something Renchen himself has realized through some of those landline calls.

“You’re always kind of surprised there’s guys you might have bumped heads with that have even reached out lately,” Renchen said. “It’s just been incredible.”

Building with the Boilers

Renchen departed Kankakee to slide over to Bradley-Bourbonnais after 14 years in maroon and Columbia blue, during which his half-a-dozen conference banners helped compile a 169-149 record.

It took some time to adjust to leaving, but Renchen realized no matter what sideline he was roaming, nothing about the lifelong relationships he had built before switching schools was going to change.

“I remember when I took the job I cried like a baby leaving Kankakee, but it was good, and I think it helped me as a coach a little bit,” Renchen said. “It was a little awkward the first time we played over at the Thanksgiving [Classic] at Olivet and I saw the maroon jerseys on the ground, but you figure out that your team is your team.

Initially, it was difficult for Renchen to replicate that same success at his new post; he still remembers taking a 55-3 loss in his first summer league game in Bradley. But as time went on, the Boilers started finding success. After winning no more than nine games in any of his first six seasons on North Street, the Boilers piled up a 16-9 mark in 2013-14 and recorded double-digit wins in six of Renchen’s last seven seasons, leaving the Boilers with a 146-196 record in his time.

Bennet Schimmelpfennig was a senior on that 2013-14 squad. He said Renchen possesses the traits past players such as Jones and Robinson spoke of, and his former coach has both yin and yang, pairing that intense coaching style with compassion.

“He’s an old school coach; he’s tough, and he’s gritty, but he’s a great encourager, always in your corner if you need him; he forges relationships off the court just like he does on the court, and I think some of that balance is hard to find in some old school kind of coaches,” Schimmelpfennig said. “I always felt that, beyond basketball, he cared about the person I was going to be.”

Lehnus joined the Boilers program in 2006, spending eight seasons as the freshmen boys coach, the last seven of those years coming under the guidance of Renchen. And not only did Lehnus end up coaching for one of his former players, but his grandsons, Zach and Nathan Wadley, also were able to play for Renchen.

The Boilers strung together three straight seasons of at least 18 wins, beginning in 2013 and going through 2016, led in the latter by the likes of program legends Micah Bradford and the late Zach Hollywood.

And the final phase of Renchen’s tenure largely was led by the most familiar of faces — his son, Gabe. Gabe enjoyed a fruitful career that included three SouthWest Suburban All-Conference and Daily Journal All-Area selections. He sits sixth in the school’s all-time scoring list and earned multiple honorable mention spots on different all-state teams as a senior.

Gabe said despite the pressure associated with being the son of a coach, he entered high school basketball excited and now has left it grateful.

“I was pretty pumped up because I knew the experience he had,” Gabe said. “He’s a great coach, but we also went at it a bit and bumped heads because we’re made of the same material. It wasn’t always the easiest, but I enjoyed it.”

As someone who chose the high school coaching path to be able to also have a tight-knit family (something he observed from Lehnus), Alex loved every minute of coaching Gabe, and the rest of his family being involved, as Gabe did.

“I wanted to be a college basketball coach, but I saw how [Lehnus’] family was around, how it was a part of his family, and he’s there every day, and I thought ‘Well, I’m not gonna move around and uproot my family just for basketball; I can be a basketball coach, and my family can be a part of it,’” Alex said. “That’s what happened, and I’m grateful for a wife that’s been there all along. I understand the dedication and commitment it’s taken, and she never complained — [family] has been a big part of it.”

Aside from Gabe, Alex’s oldest son, Sam, found a home in the Bradley-Bourbonnais community as part of the Best Buddies program, a program that unites students with peers with intellectual and developmental disabilities, as well as putting on his own broadcasts of Boilers basketball, complete with coach and player interviews.

“That exhibits what basketball is to our family because Sam found a way to be a part of it, and it became a big part of his life,” Alex said. “I’m very grateful that that he was a part of it and was something he could share with his brothers.”

There is one more Renchen boy to still come through Bradley-Bourbonnais, as Jeremiah, Alex’s youngest son, is preparing for his sophomore year. He will be taking in games from a different point of view, but Alex doesn’t expect any old coaching tendencies to arise when watching games just as Dad.

“I understand a parent’s place — my place is to make sure [Jeremiah] is prepared for that path, but I don’t need to prepare that path for him,” Alex said. “I just need to raise a boy into a man.”

With a little more free time, Alex might find himself entangled in more lengthy chats from his home phone. And as those calls keep coming as past players reap the long-term benefits of what their old coach prepared them for, Alex hopes his lasting message remains clear.

“Just do the right thing, and do it the best you can,” Alex said. “And reflect because you [have to] have a growth mindset. Do the best you can every day, do it right, and reflect on your mistakes so you can fix it.”