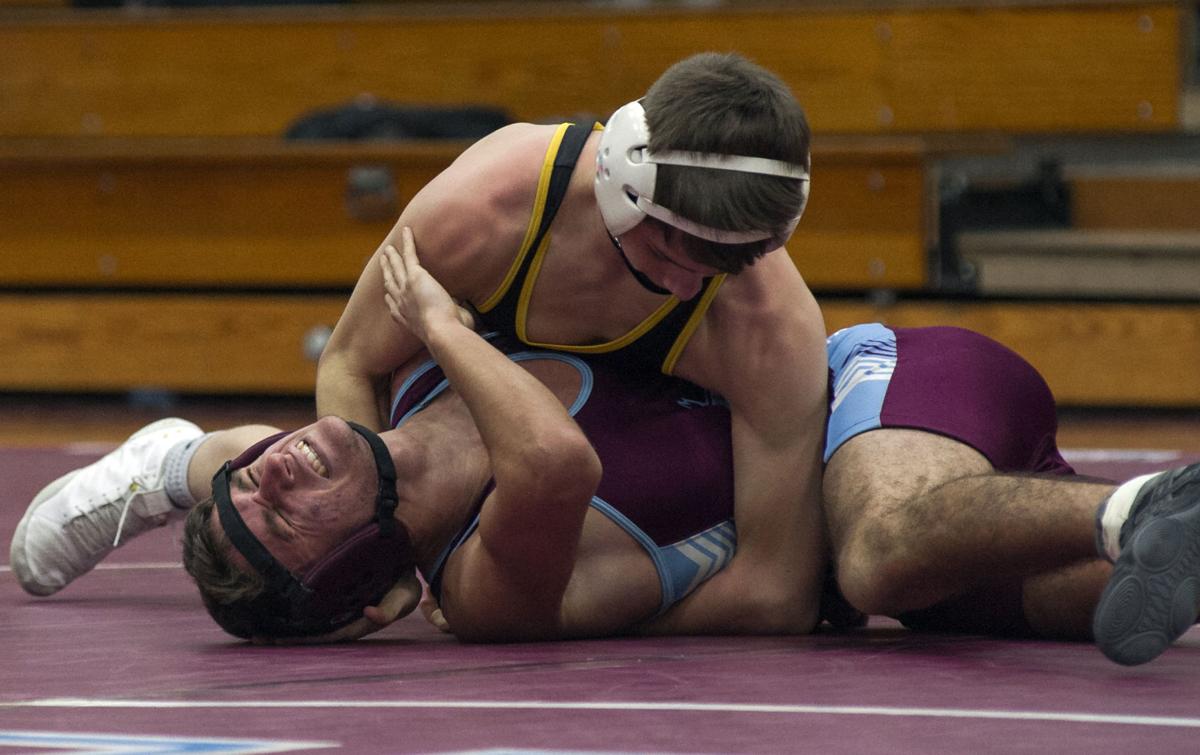 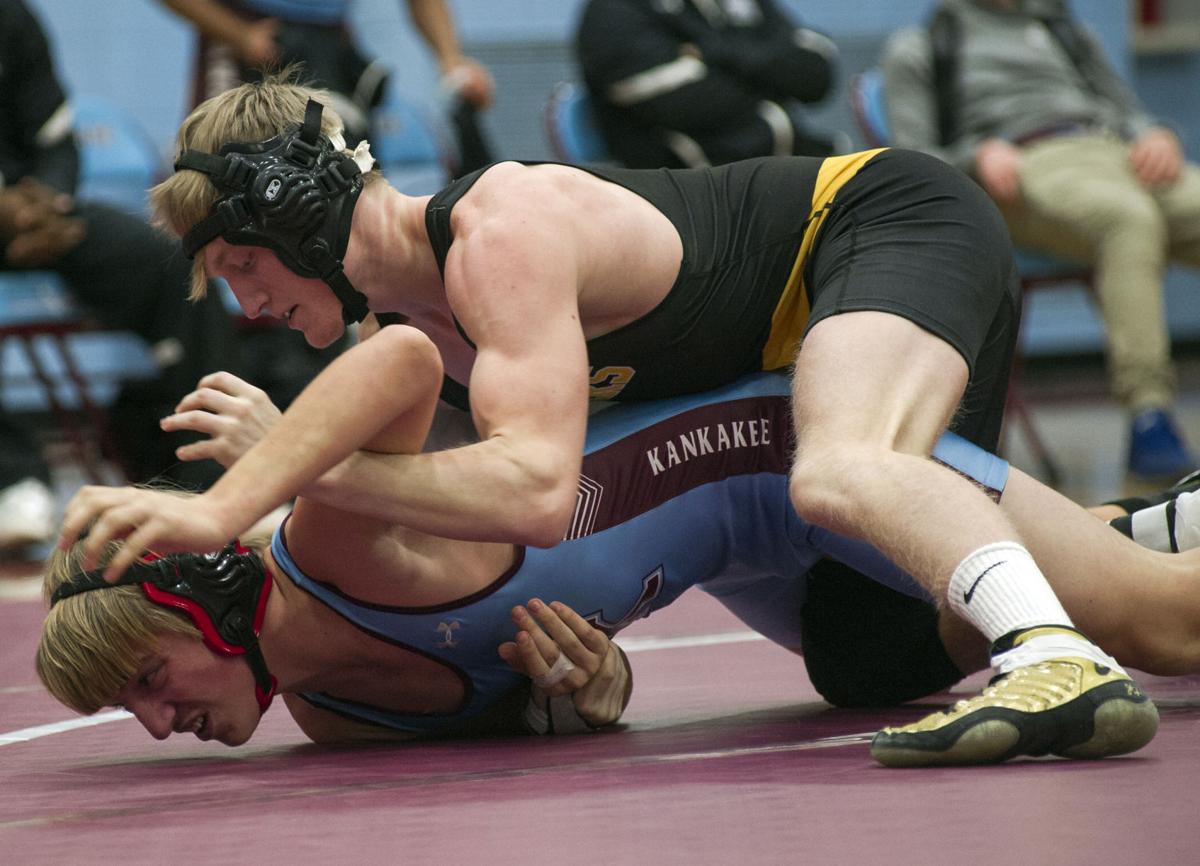 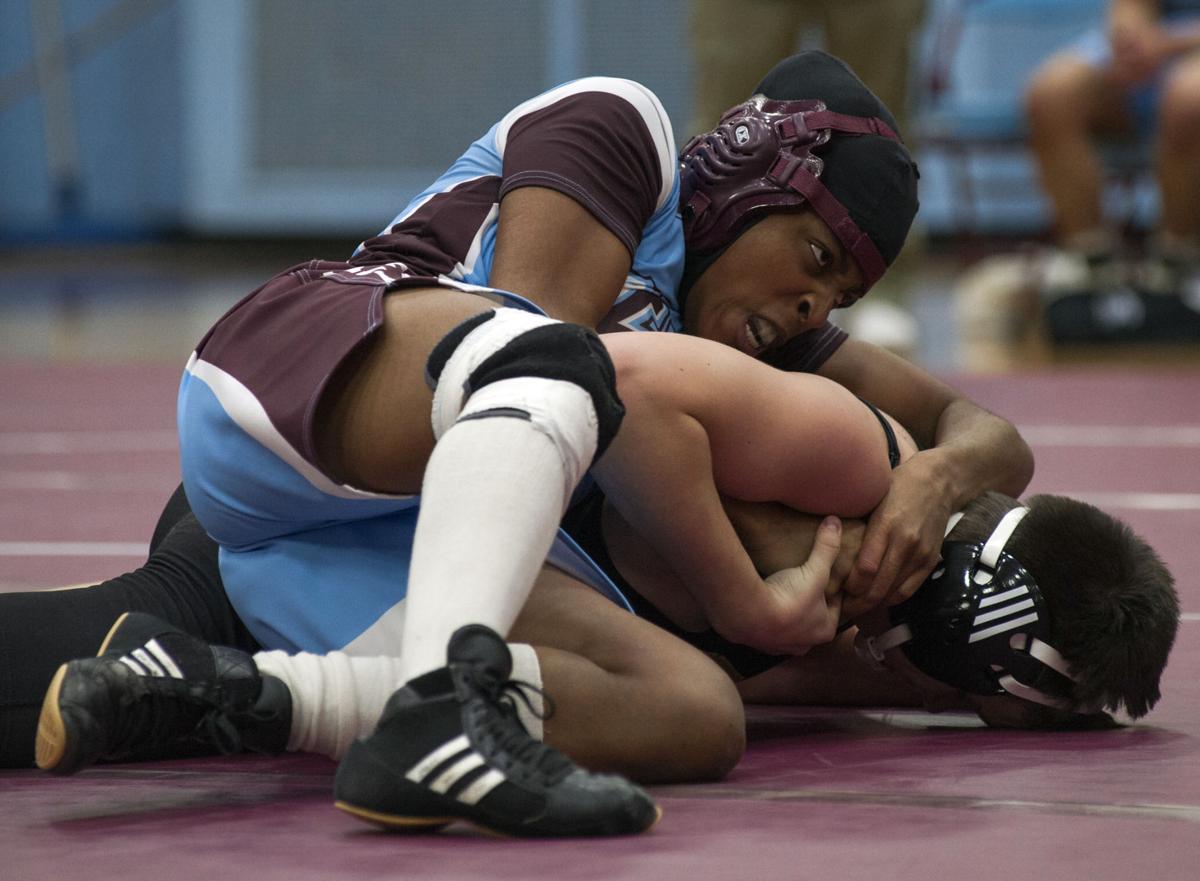 Kankakee’s Starr Griffin, top, wraps up Herscher’s Daniel Price in a hold as they compete in their 138-pound match Monday in Kankakee. Herscher’s Price won the match. 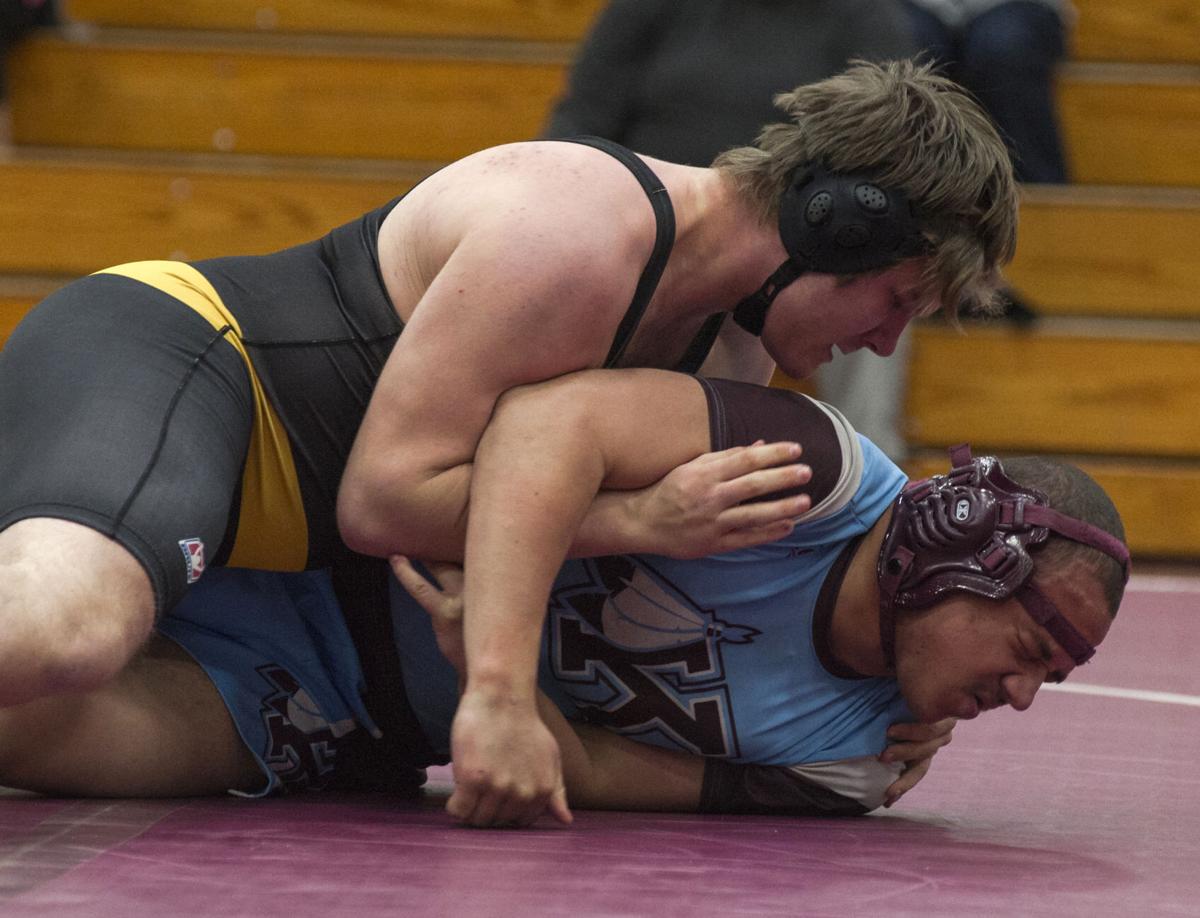 KANKAKEE — Both teams were shorthanded in Monday’s matchup, but Herscher’s experience was too much for Kankakee to handle.

The Tigers came away with six victories via pinfall and four more by forfeit to score a 57-12 victory against Kankakee on Monday night.

“Both teams are pretty young, but overall, I thought we did pretty good,” Herscher coach Rob McIntire said. “We were missing a couple seasoned guys who were out sick, but the guys wrestled hard. There’s still some work to be done, but I like what they did tonight.”

Of the seven pinfalls for Herscher, only two of them came in the first round.

Carter Smith earned his victory against Brian Perkins in a 182-pound bout in just 1:03, and Kobe Sands won his 160-pound match in 1:20 against Jerry Harsa.

Kankakee coach Brad Burns preferred to see the pinfalls as more than just losses as his young team works to improve.

“We’re not winning matches necessarily, but we’re finishing matches and taking opponents deeper into the second and third rounds now,” Burns said. “When we first started, we were getting pinned within 25-30 seconds of the match starting. Now, we’re starting to stretch matches out and even winning a few of them, which is very pleasing to see as a coach.”

“I’ve seen a lot more fight out of this group as the season has [gone on],” McIntire said. “Instead of giving up an easy takedown, they’ll fight for it. They continued to learn and add some new moves to their arsenal while learning how to stop other moves, and it’s made a difference. You can see the confidence they have now.”

Kankakee came away with two victories on the evening. One was a forfeit, and the other saw Chase Grayling pin Vinny Smolkovich in the third round with just 20 seconds left in a 132-pound match.

Match of the night

The match at 138 pounds had everyone on the edges of their seats.

Herscher’s Daniel Price and Kankakee’s Starr Griffin tangoed with one another to the point three rounds just wasn’t enough.

Price started out with a 4-0 lead after scoring a takedown and a reversal, only to shoot himself in the foot with two penalty points and allowing a reversal to tie the match at four going into the third round.

“Starr is the real deal and never backs down,” Kankakee coach Brad Burns said. “She’s been wrestling guys all year, and in the one tournament she wrestled girls, she wiped out everyone. She’s as tough as it comes and one of the best wrestlers that I’ve coached so far.”

Griffin scored a reversal and takedown to take an 8-6 lead with just less than a minute left, but Price notched a takedown to tie the score and head into overtime.

In overtime, Griffin looked as if she had the upper hand, but Price popped out of the hold to score a takedown for the 10-8 victory.

“Daniel is a first-year wrestler, and I liked that he didn’t give up,” McIntire said. “There’s still a lot he has to learn, but matches like that are valuable for experience reasons. He showed heart.”

Both teams are back in action Wednesday. Herscher is at home in a tri-match against Bishop McNamara and Central. Kankakee travels for a tri-match with Rich East and Crete-Monee.