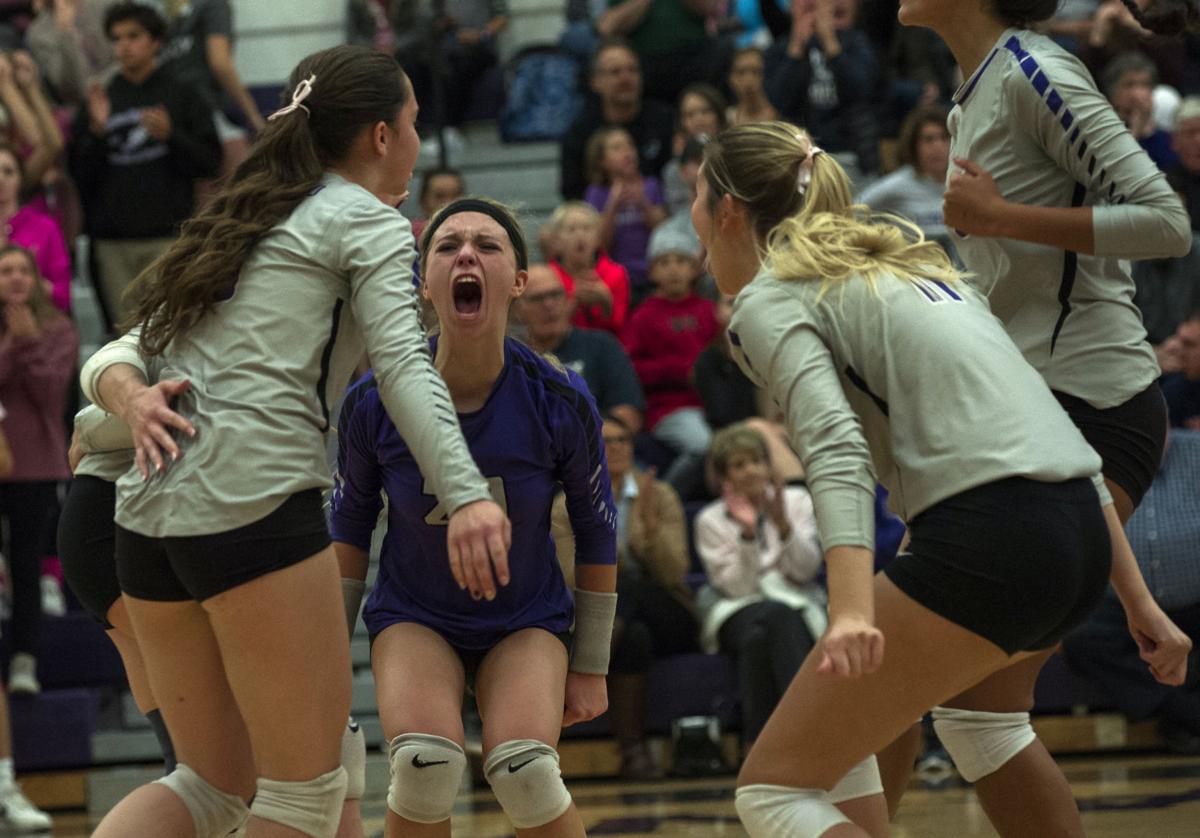 Manteno High School’s Sariah Schulteis, center, reacts with her team upon winning a point over Herscher High School during Tuesday’s match in Manteno. The Panthers earned a 2-0 win, which gave the two teams a split of the first-ever Illinois Central Eight Conference volleyball championship. 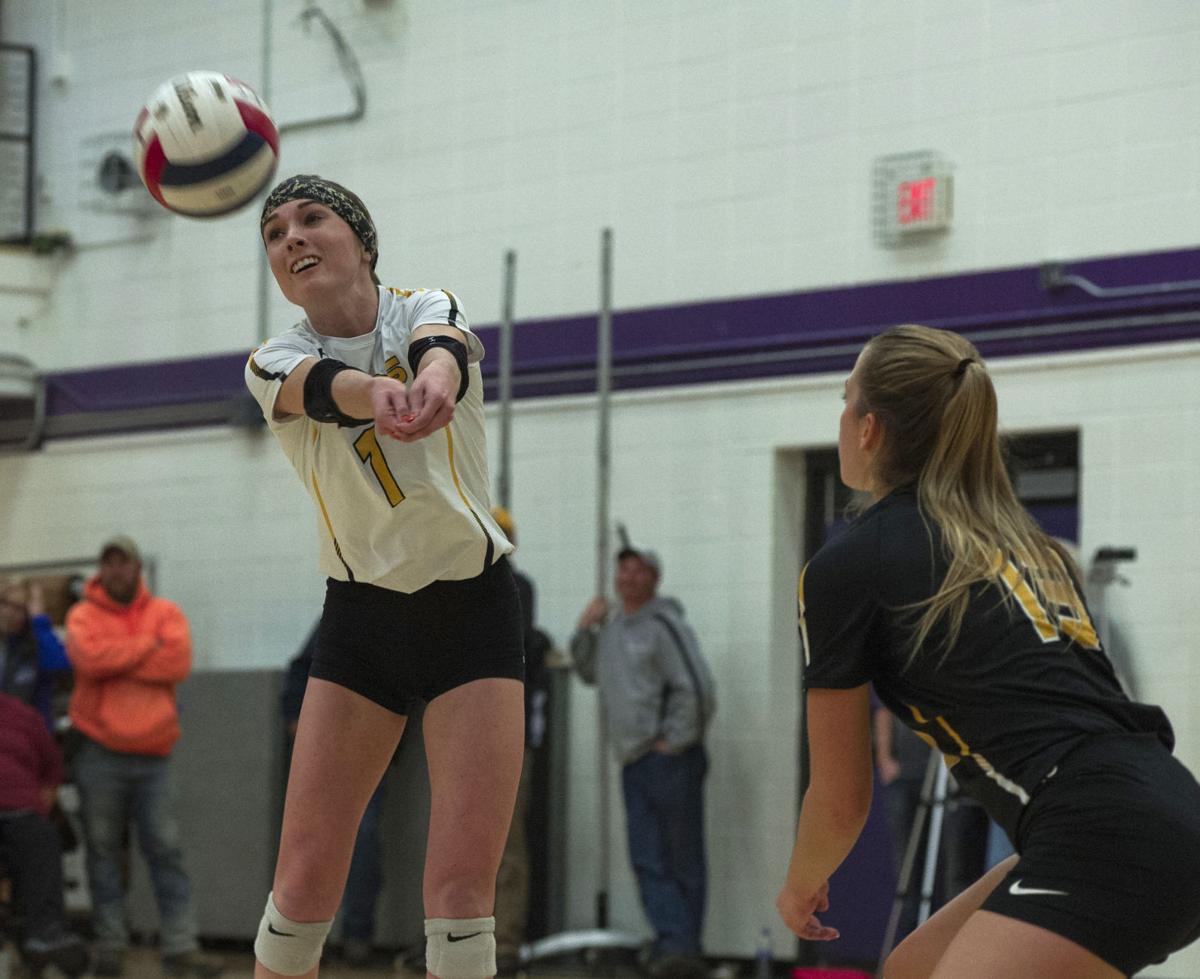 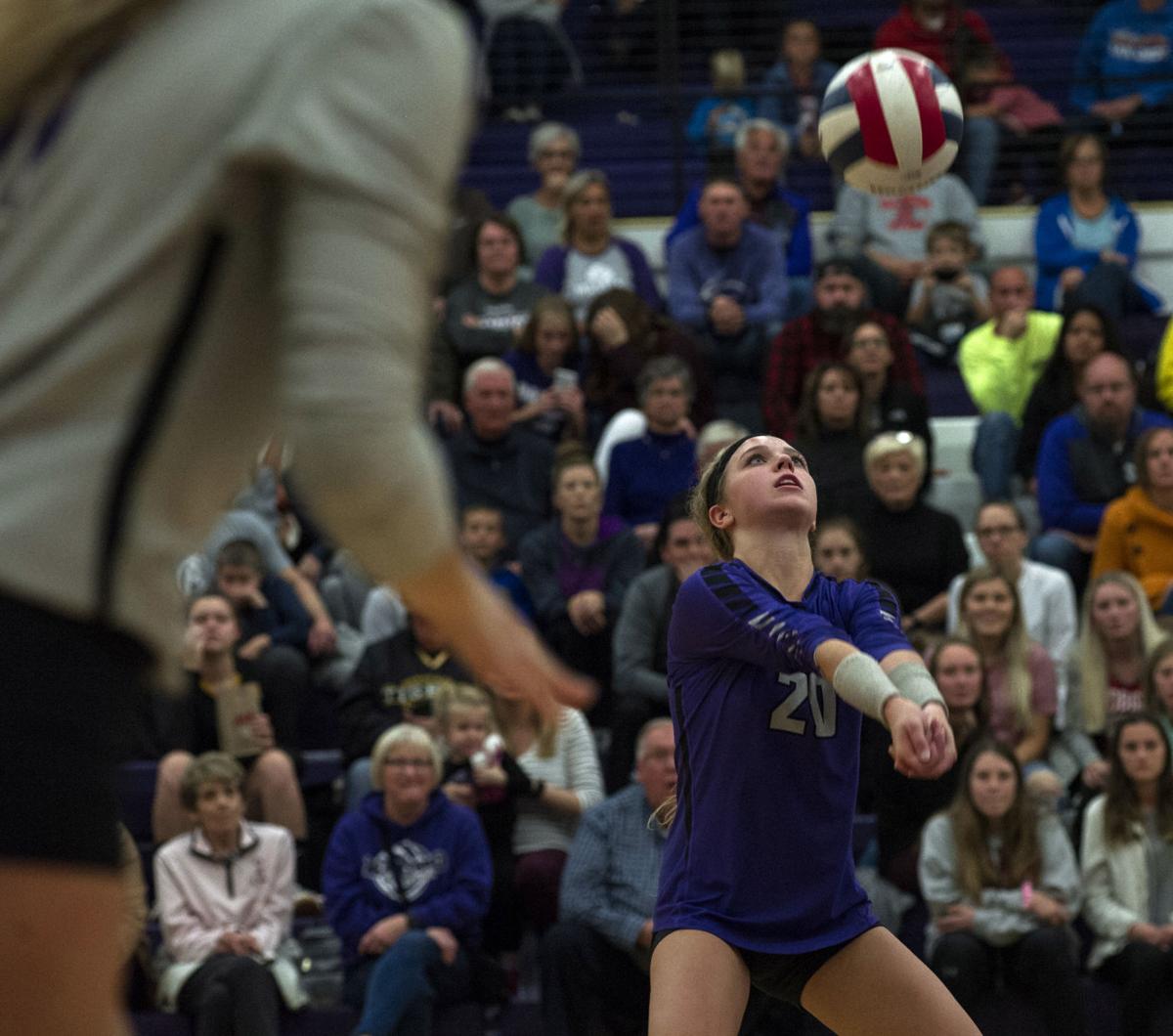 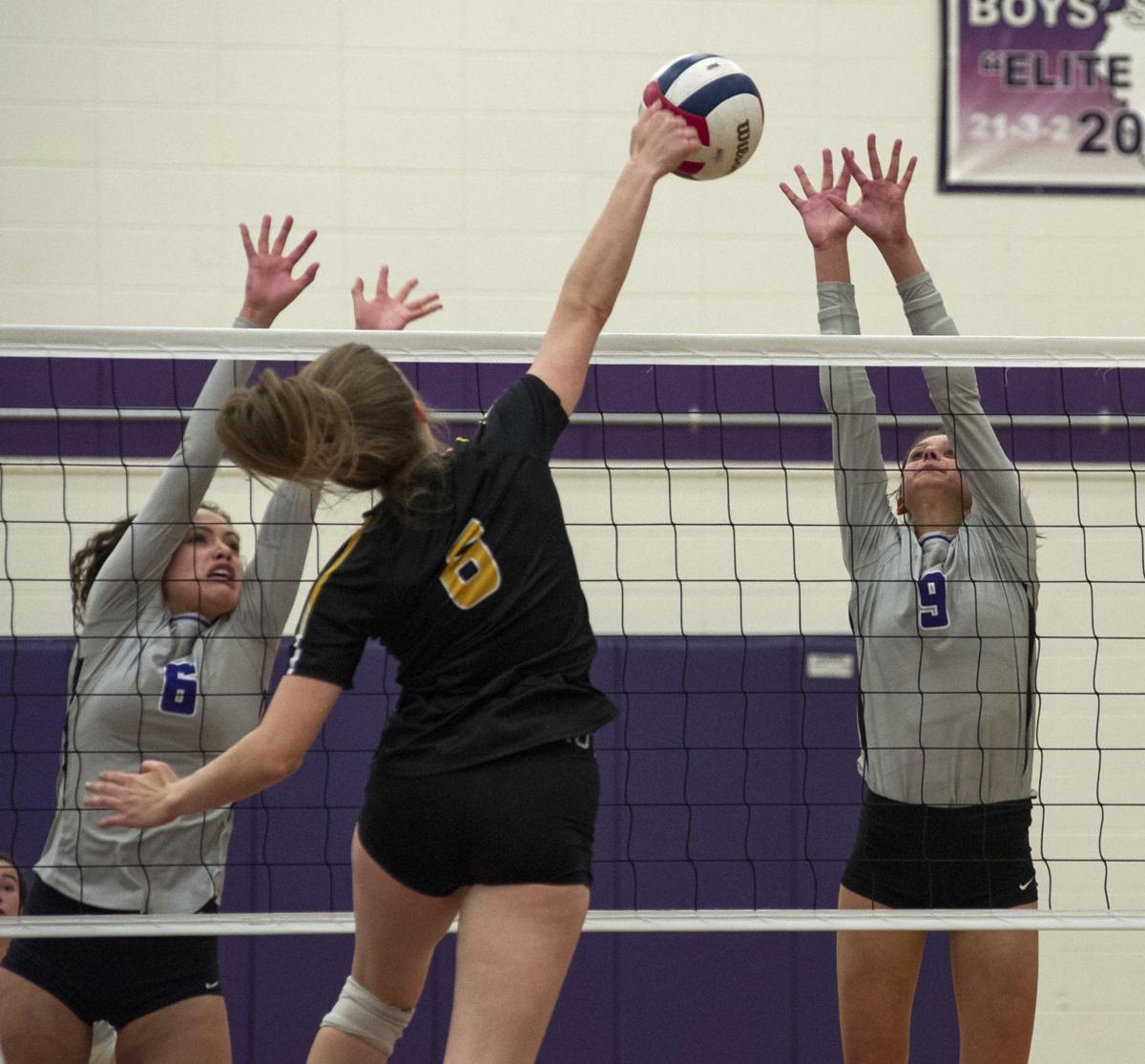 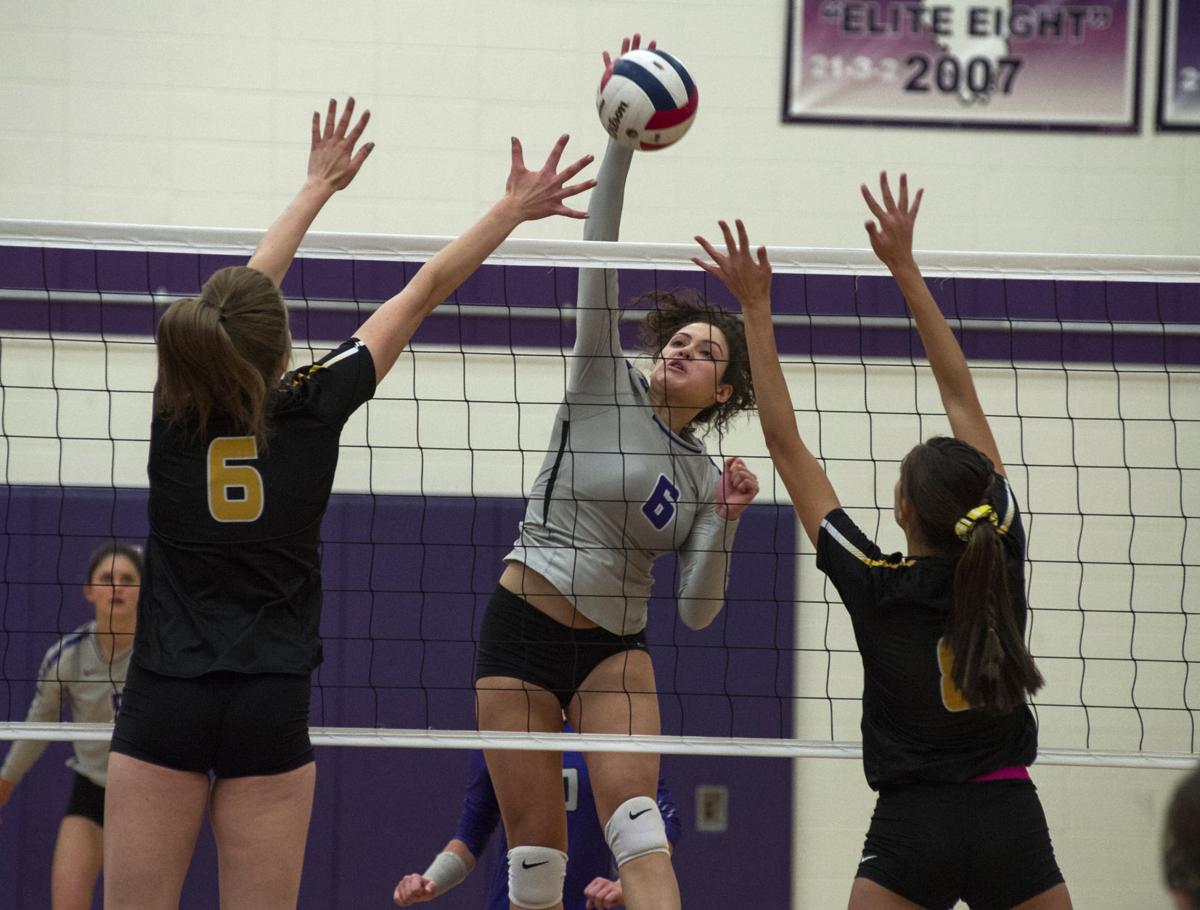 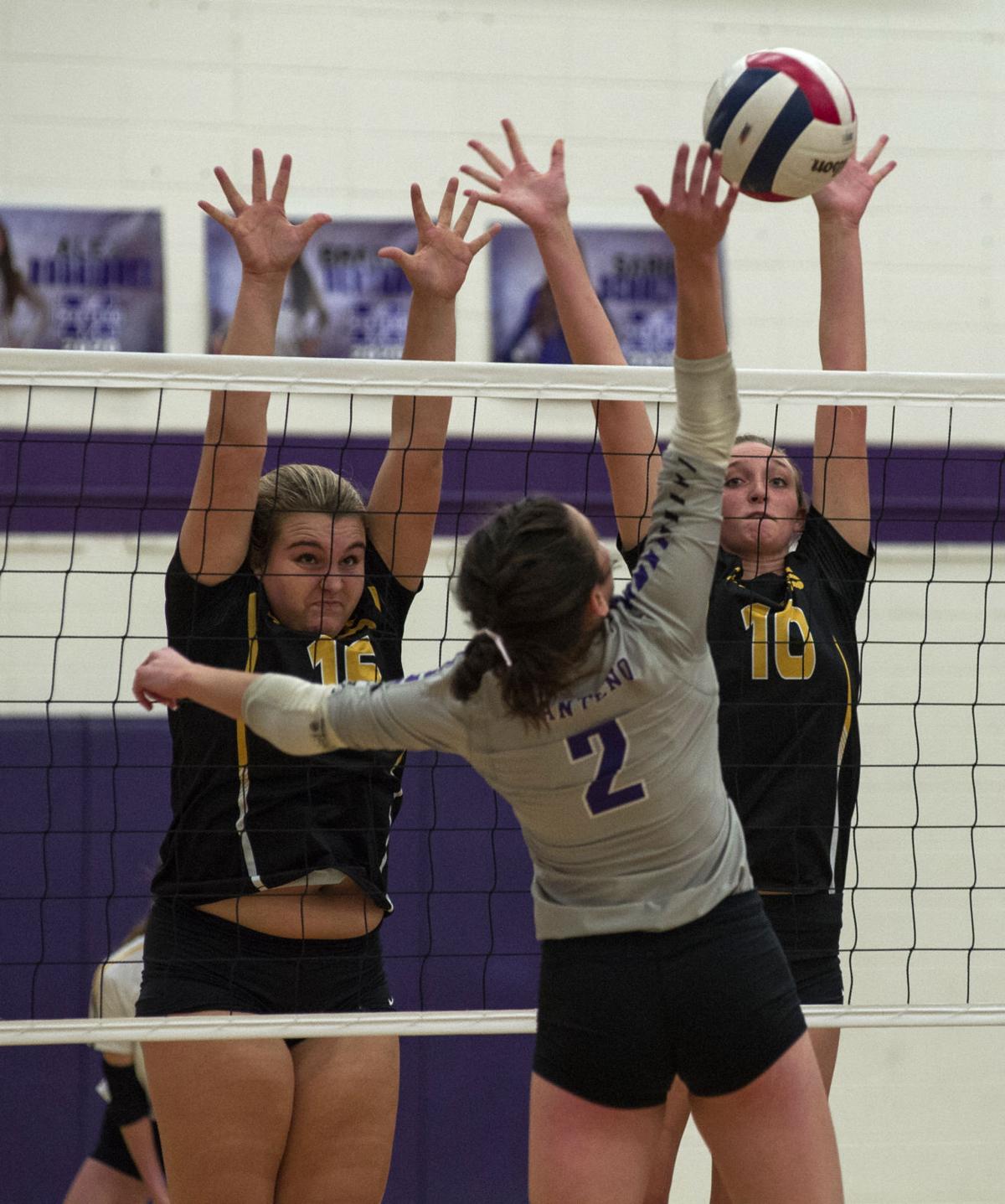 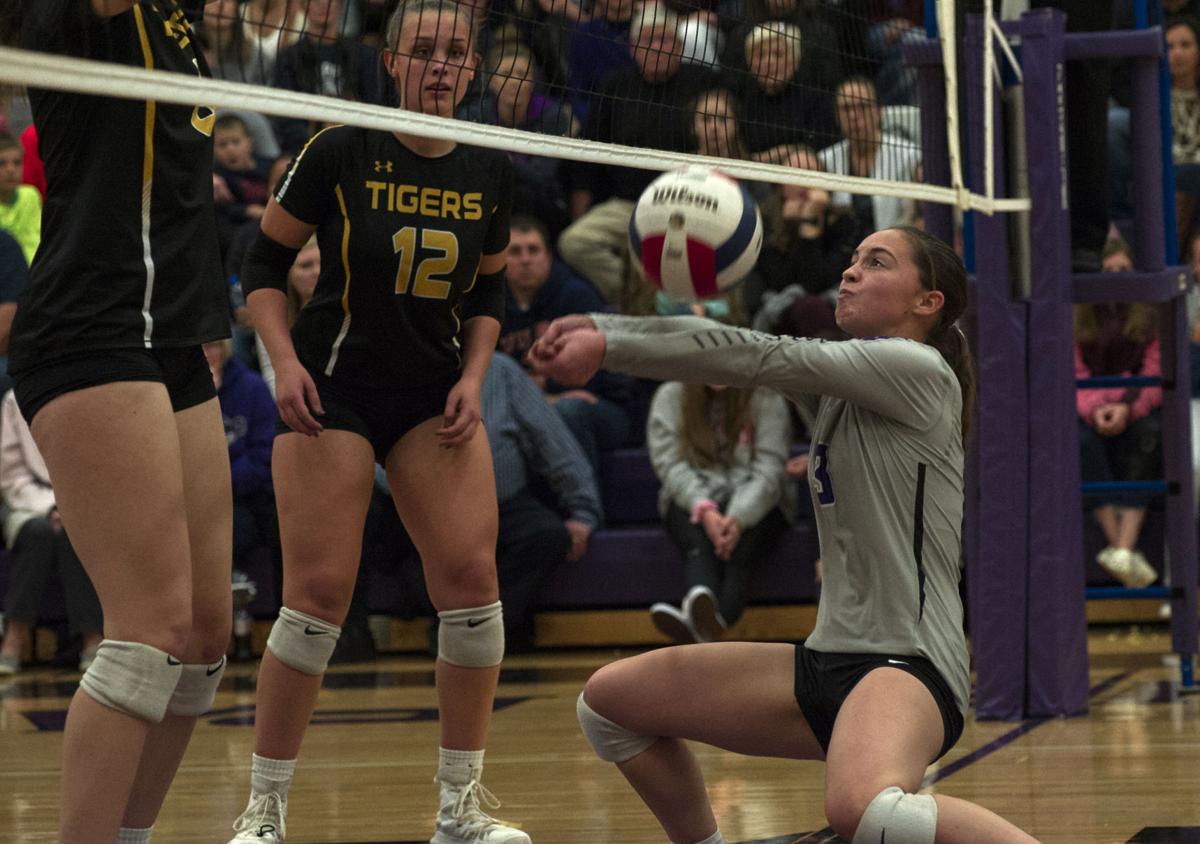 Manteno High School’s Dayli Dwyer bumps the ball at the net during Tuesday night’s match against Herscher High School. Manteno avenged an earlier defeat to Herscher, and by doing so, forced the two teams to share the Illinois Central Eight Conference championship. 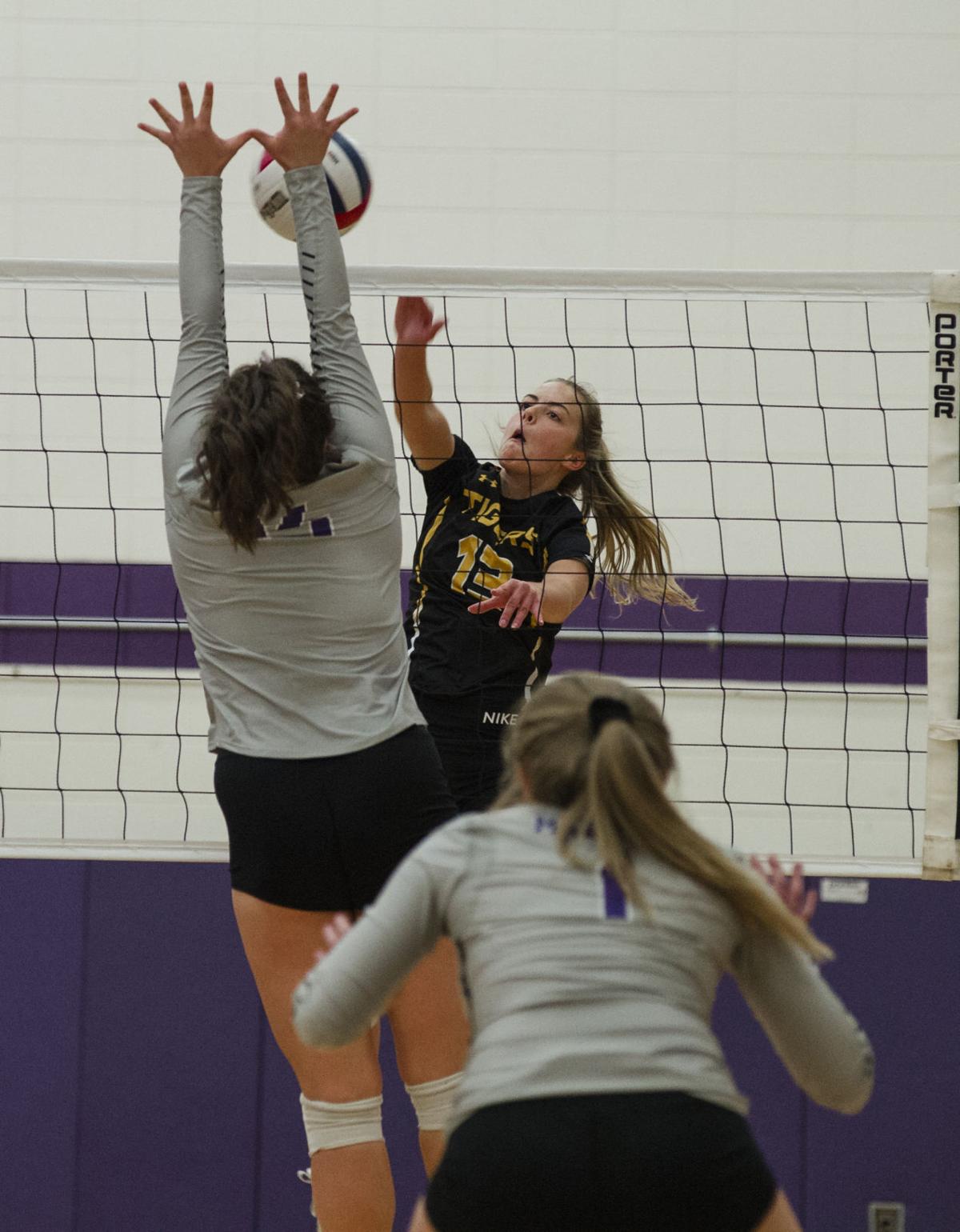 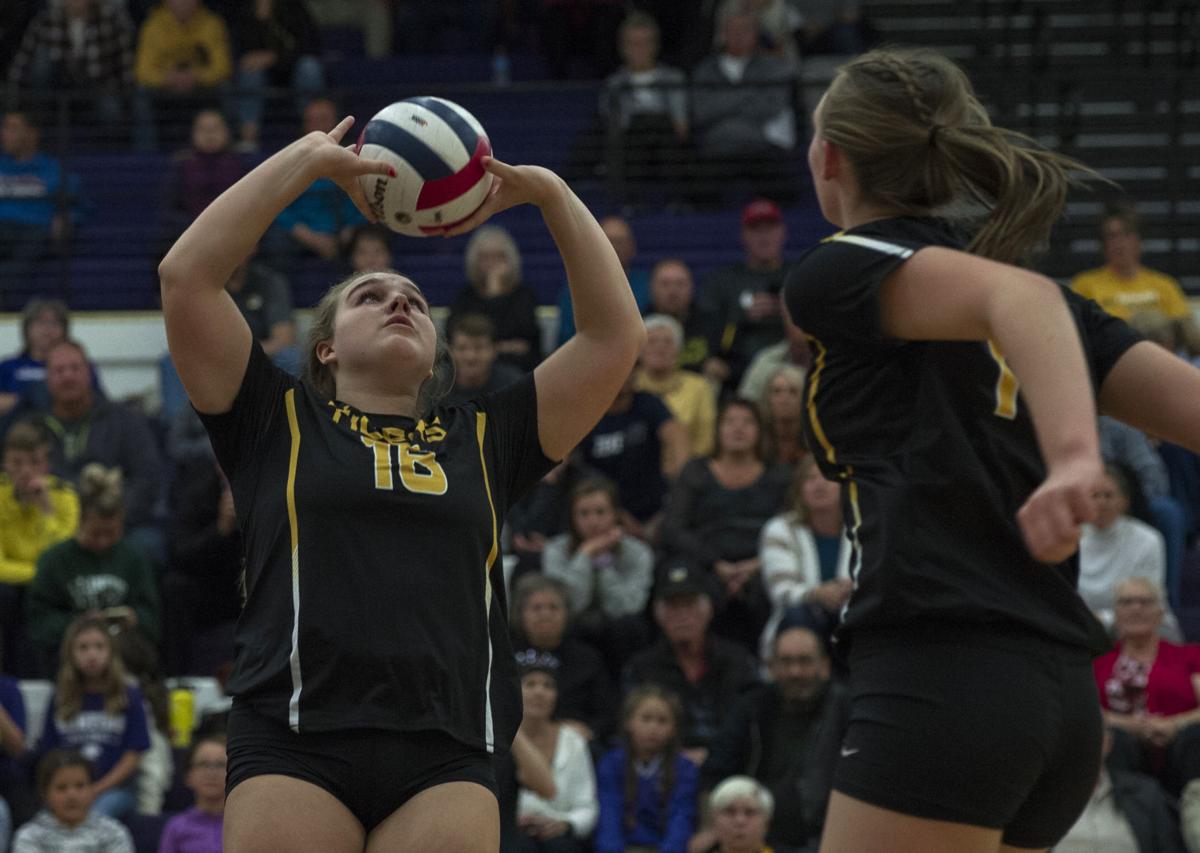 Manteno High School’s Sariah Schulteis, center, reacts with her team upon winning a point over Herscher High School during Tuesday’s match in Manteno. The Panthers earned a 2-0 win, which gave the two teams a split of the first-ever Illinois Central Eight Conference volleyball championship.

Manteno High School’s Dayli Dwyer bumps the ball at the net during Tuesday night’s match against Herscher High School. Manteno avenged an earlier defeat to Herscher, and by doing so, forced the two teams to share the Illinois Central Eight Conference championship.

MANTENO — The past handful of days have been quite busy for Manteno’s volleyball team. The Panthers played — and won — five matches over the weekend at the Moldenhauer Classic in Bradley, had Sunday off and then turned around and had to sweat out a three-set win over Bishop McNamara Monday on senior night.

Even with all those big matches, the Panthers still had to conserve enough energy and enthusiasm for the biggest match of their season this far in Tuesday’s regular season finale against Herscher.

It’s safe to say the Panthers had enough left in the tank.

It took just two sets for Manteno to avenge last month’s loss at Herscher — the last time the Panthers have lost a match — as they quickly earned a 25-19, 25-21 victory over the Tigers.

And this Reese Bachus block gives the Panthers a 25-21 win and more importantly, a sweep of Herscher. Both teams will split the first Illinois Central Eight Conference crown. #tdjs pic.twitter.com/dne9Oo3Rnt

“Going into our last home game of the season, they were ready to leave it all on the court and leave it all out there,” Panthers coach Jocelyn Ferris said. “Obviously this is a game we’ve been looking forward to for weeks and weeks to get our revenge.

“I think the girls not only worked hard for it but earned that win.”

“We wanted to keep the streak going that Manteno’s had for a while,” Panthers outside hitter Reese Bachus said. “We knew it was going to be a good game, they have a stacked team, but we pulled it off.”

Ferris, who is in her first season as head coach after replacing longtime coach Cheryl Davis, said she owed it all to the girls on the court for keeping the streak alive.

“I didn’t quite know what to expect coming into my first year,” Ferris said. “You obviously want to win as much as you can and try to do your best to make that happen.

“These girls, the fight they put into it and the love they have for the game, they deserve that title and to have that recognition as a team.”

The Tigers opened the night by scoring the first two points of the first set and held a steady lead until an Alex Rodriguez kill tied things at 14. The teams traded the next three points, but after a couple of errant Tiger hits that didn’t make it over the net made it 19-17 Panthers, the home team rode the wave out for a 25-19 win in the first.

Tigers coach Joel Huizenga said that the Panthers gave his girls fits by keeping them behind the 10-foot line, something not many teams have achieved this season.

“We were sharp early, then we got down but didn’t let them get away,” Huizenga said. “We couldn’t work, we couldn’t run our offense because of the intense pressure Manteno brought.

“You have to give Manteno credit for that, but you leave feeling a little frustrated because not many teams have been able to keep us behind that 10-foot line.”

It was the Panthers who scored the first three points of the second game, although the Tigers were able to quickly narrow the gap and even take a lead as large as four points in the middle of the set.

But once again, the Panthers’ aggressiveness was too much for the Tigers and their own aggressive style of play to keep up with, and once the Panthers took a 13-12 lead in the middle of the set, they never let the Tigers take another lead.

Karli Wenzel, the Panthers’ outside hitter opposite Bachus, said that even though they won the first set, the Panthers had to keep the pressure on against a Tigers team capable of striking at any moment.

“We’re still aggressive,” Wenzel said. “We know they’ll mix it up and be more challenging because they’ll be more determined, so we had to step it up.”

Claudia Huston had eight kills and seven digs to lead the Tigers. Olivia Ruder had nine digs and Jordan Pierce had nine assists.

Both teams are done with regular season play and will be back in action in IHSA Class 2A Regional action next week. The Panthers are in the Peotone Regional, where they will take on the winner of Monday’s matchup between Wilmington and Reed-Custer at 5:30 p.m. Tuesday.

The Tigers host their own regional and will also be in action at 5:30 p.m. Tuesday, taking on the winner of Monday’s matchup between Bishop McNamara and Central.