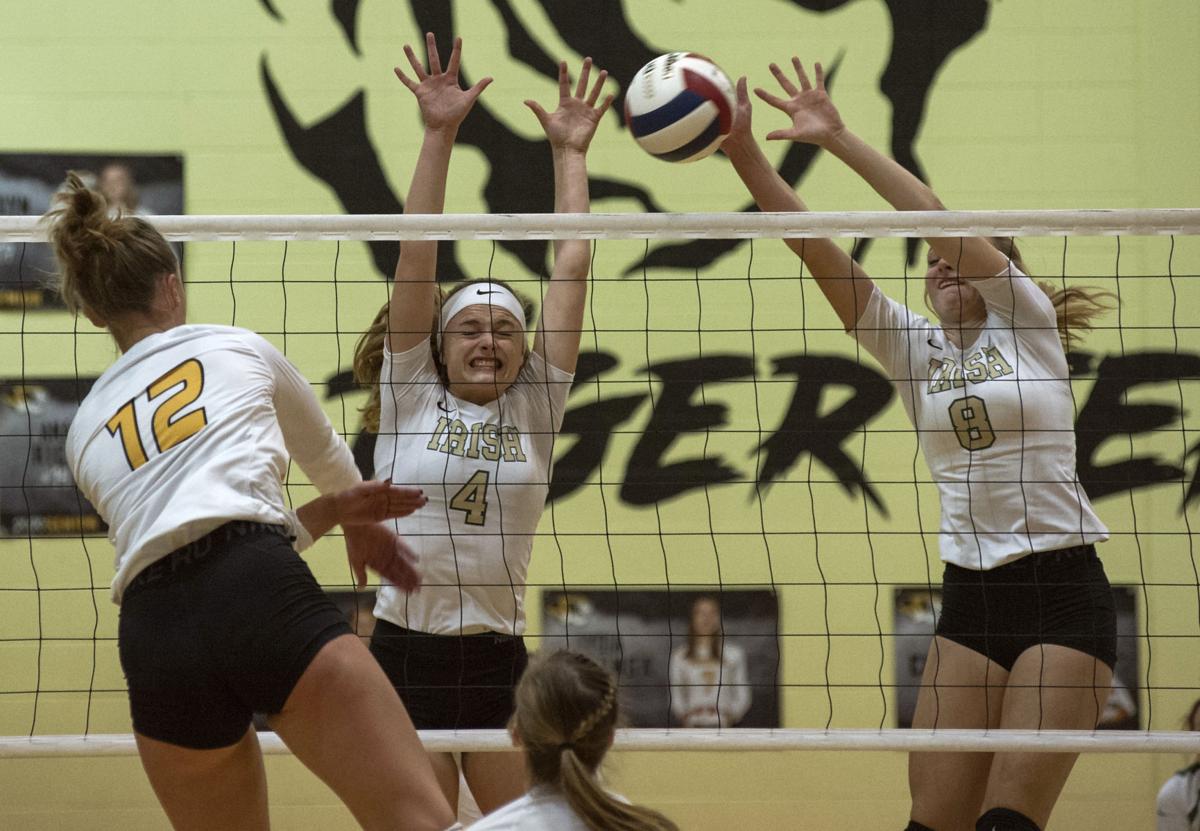 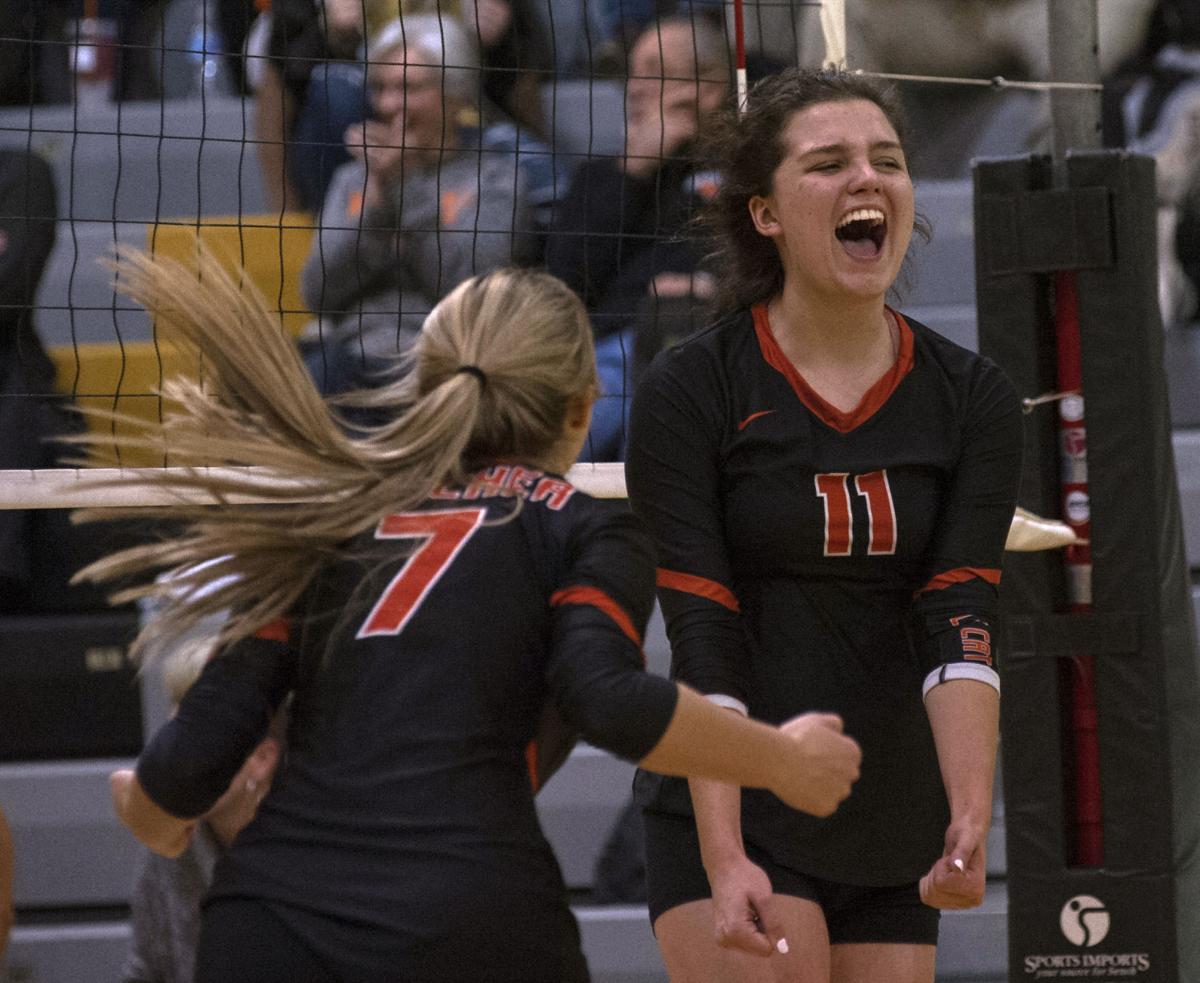 Beecher's Kaylie Sippel (11) and Cheyanna Stluka (7) react after winning a point against Coal City during Tuesday's Class 2A Regional match in Herscher. 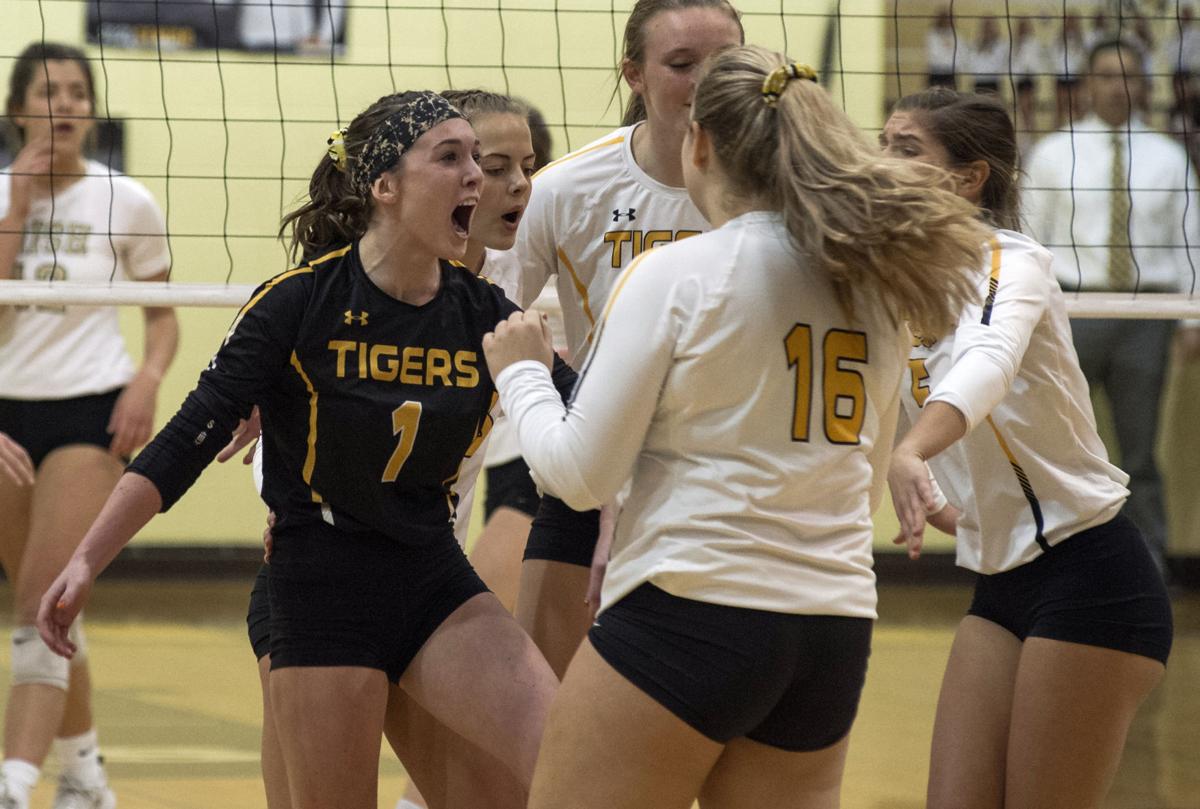 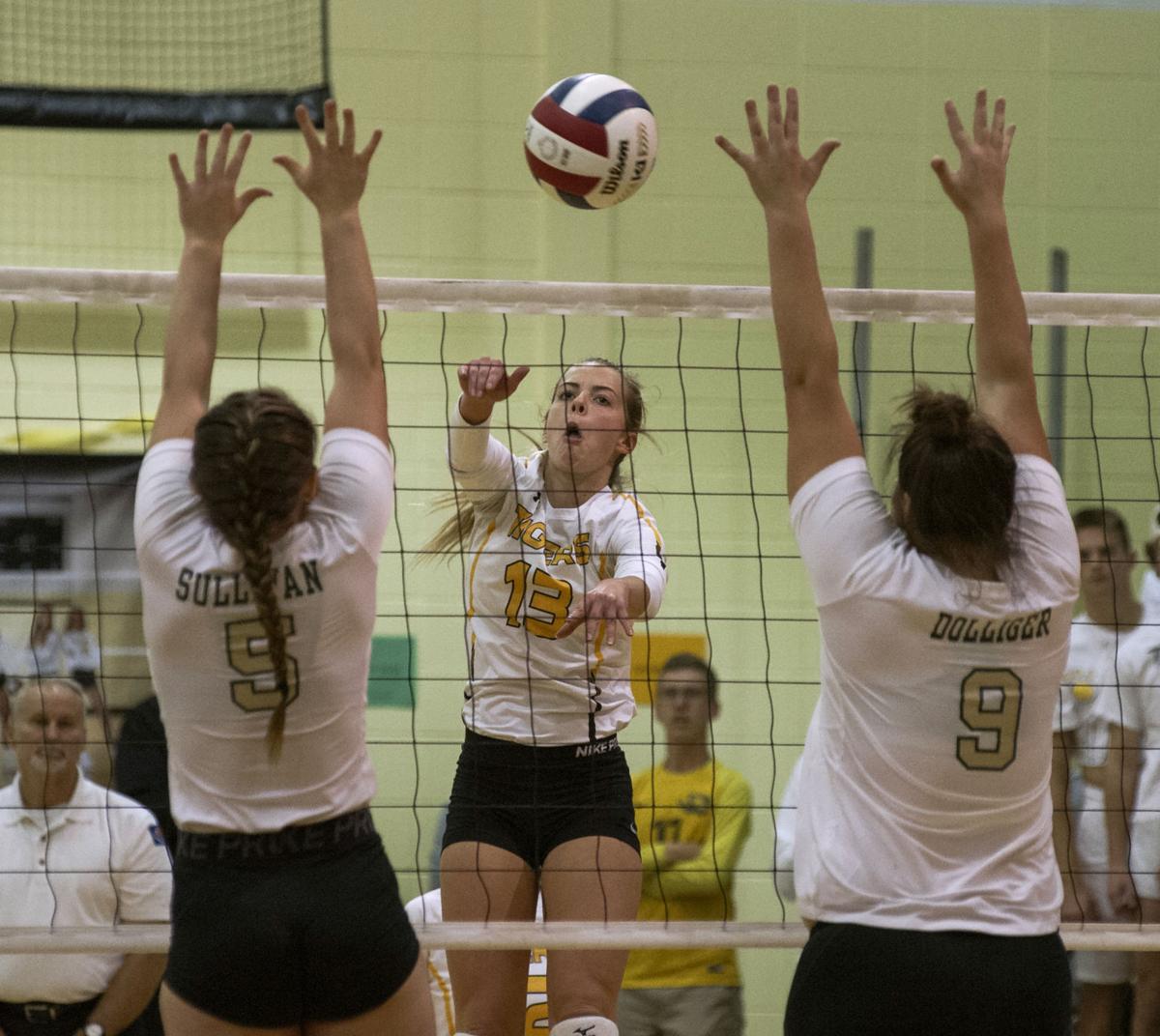 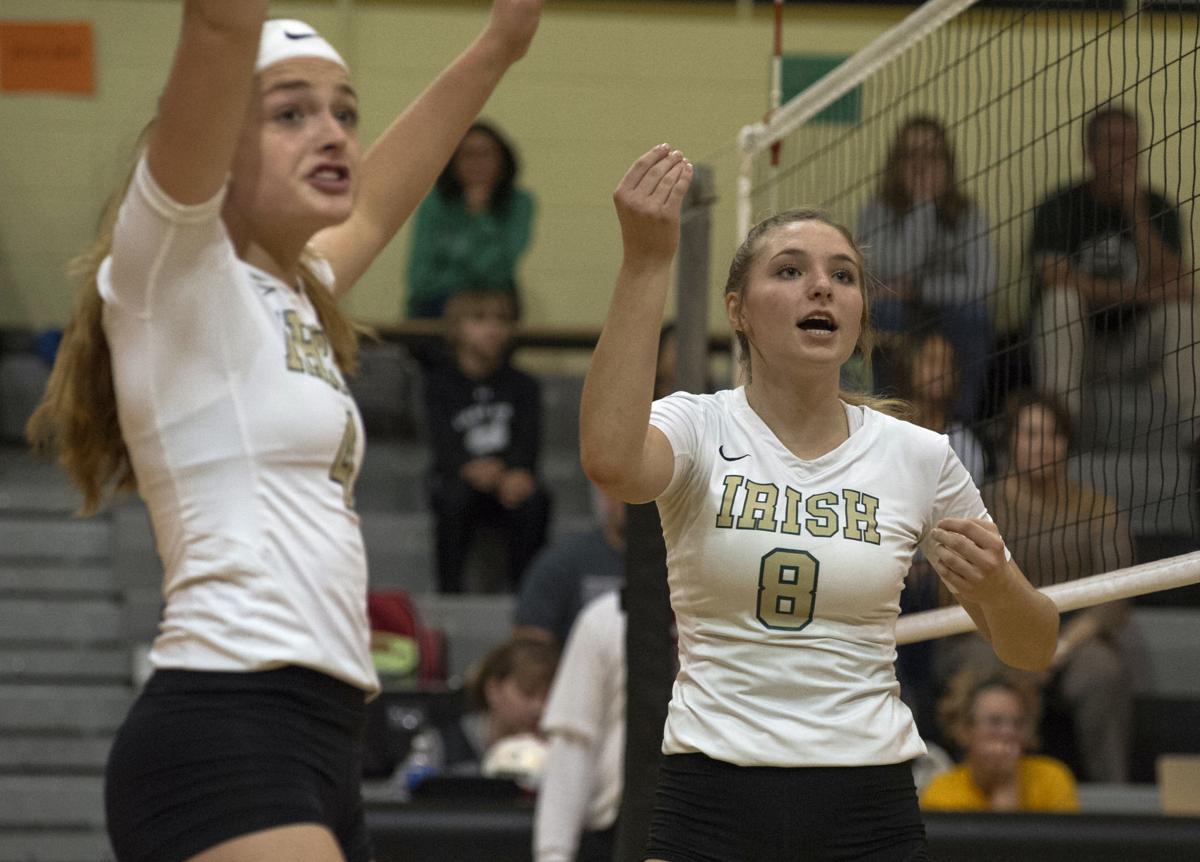 Bishop McNamara Catholic High School's Kara Kleinert, left, and Jacqueline Allaway, right, unsuccessfully argue that the ball was tipped by a Herscher High School player before landing out of bounds during Tuesday night's Class 2A Regional match in Herscher. 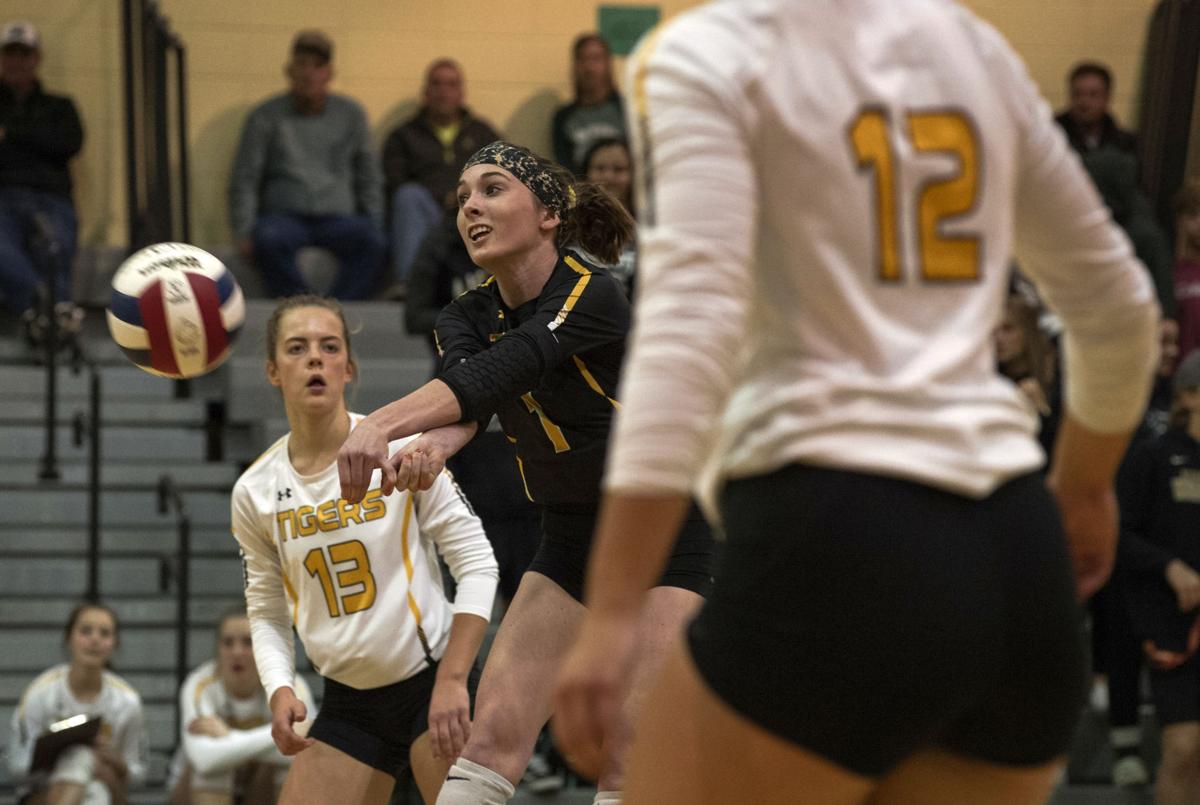 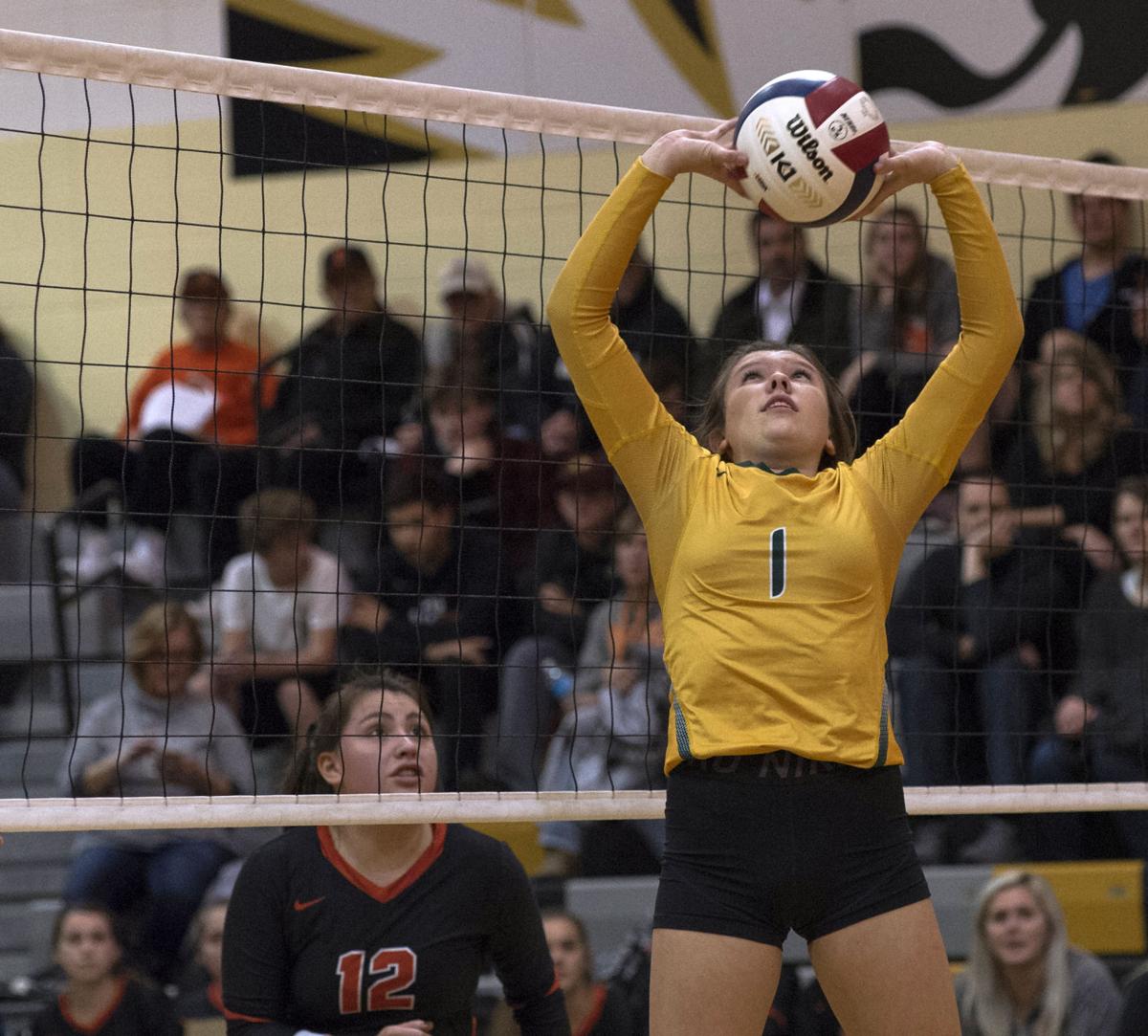 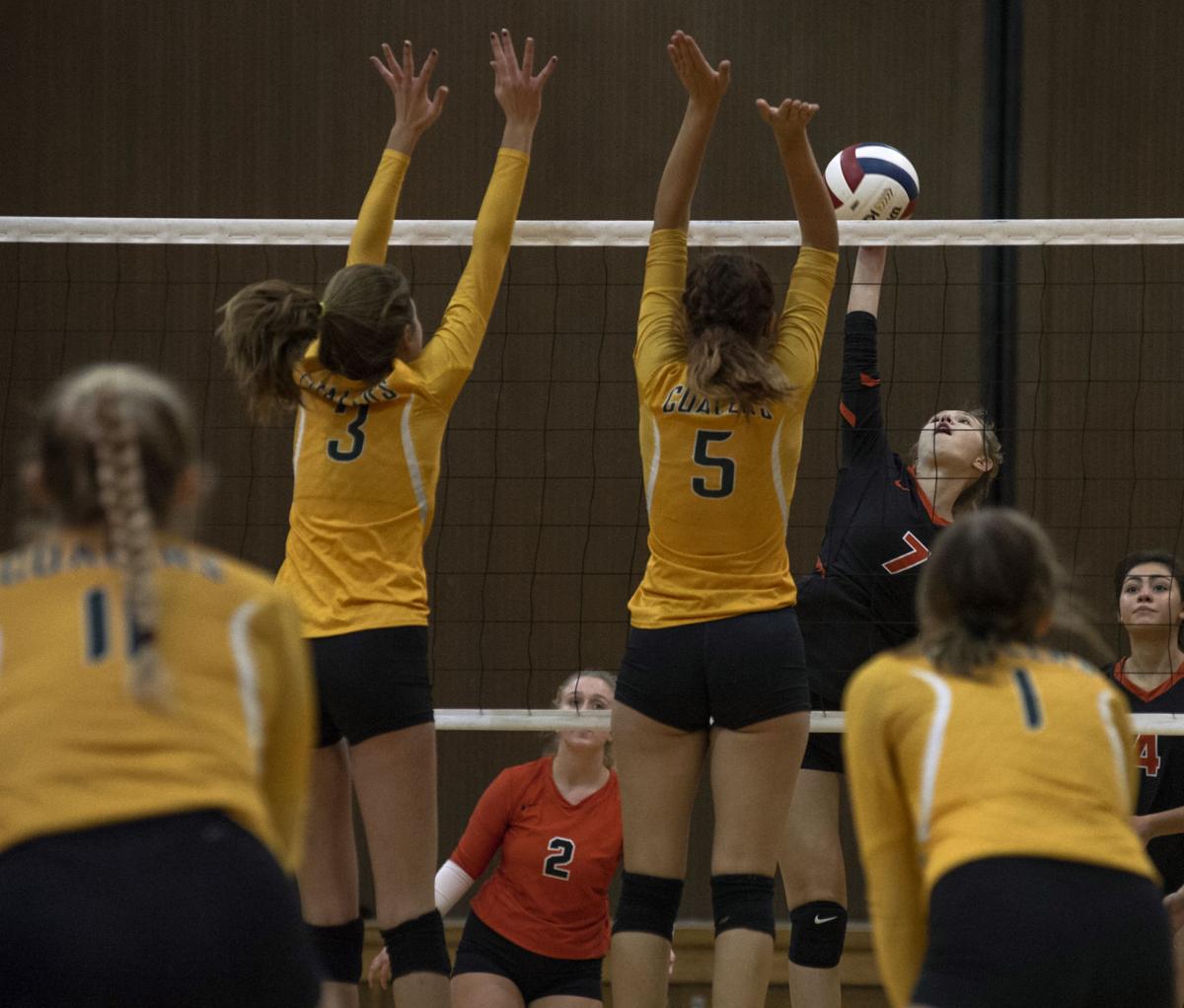 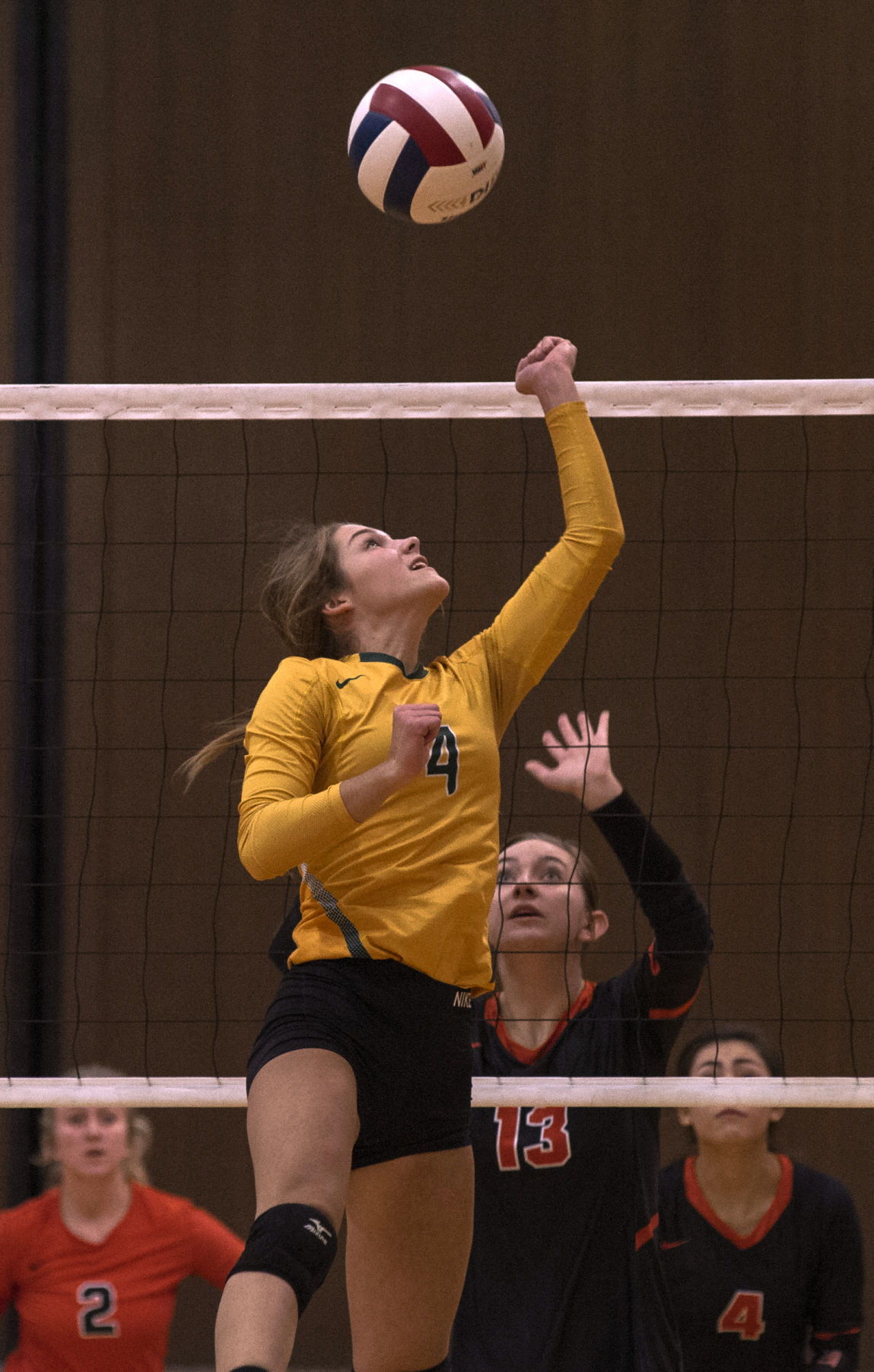 Bishop McNamara Catholic High School's Kara Kleinert, left, and Jacqueline Allaway, right, unsuccessfully argue that the ball was tipped by a Herscher High School player before landing out of bounds during Tuesday night's Class 2A Regional match in Herscher.

HERSCHER — When regional volleyball play began Monday, coaches and players across the state threw out whatever regular season goals they did or didn’t achieve and re-calibrate for the playoffs.

Herscher and Beecher were no exceptions. Both teams defeated their IHSA Class 2A Herscher Regional semifinal opponents during the regular season — Herscher topped Bishop McNamara in August and Beecher did the same to Coal City in September — but with those matches so long ago, both teams entered Tuesday with clear minds.

And both teams will now have new victories to reminisce on, as the Tigers toppled the Irish and the Bobcats cut down Coal City to set up a championship match between two of the area’s most victorious teams this season.

The top-seeded Tigers had a week off of after ending the regular season with a loss at Manteno last Tuesday. And while it took a brief moment for coach Joel Huizenga’s crew to get back in the swing of things, once they did, the results were evident.

“It was just nice to get on the floor and see how they were going to perform together after that setback at Manteno,” Huizenga said. “And, obviously, they answered it, and it was a great job.”

The two teams split the first dozen points before the Tigers started to find the rhythm that led them to a split of the Illinois Central Eight Conference title, as a 6-2 run created a 14-8 lead and put momentum squarely on the side of the home team.

Senior outside hitter Claudia Huston helped contribute to that run with a pair of kills. She said that once her and her teammates get on a roll like they got on in the first game, it’s simply fun to be a part of.

“I have fun, I don’t know if anyone else does,” Huston said. “When you know you’re doing that well, you have to keep up that confidence, and that’s a hard thing to do.”

The Tigers were able to keep that confidence up down the stretch, as they fought off a brief push back from the Irish, who closed the gap to nothing closer than four points before some skilled shots down the line from Mady Rogers spurred the Tigers to a 25-13 win in the first.

“She had one that she got blocked on early and it was actually a really nice hit,” Huizenga said of Rogers’ down-the-line shots. “After that, we said, ‘Hey, look to score down the line and see what you can do,’ and she was awesome.”

Irish coach George Hagemaster said the team’s passing left a little to be desired as the first game closed, which allowed the Tigers to take more advantageous opportunities.

“Our passing broke down — we weren’t getting the ball to [setter] Kara [Kleinert and couldn’t run an offense,” Hagemaster said. “Sending free balls makes it easy [for the Tigers] to run an offense.”

The Irish stayed more consistent in the second, but the Tigers were just the better team as the night went on. After an early 2-0 lead evaporated quickly, the Irish never regained the lead as the Tigers rolled to a 25-17 win in the second.

With the loss, the Irish saw their season end at 14-20. Four seniors on the roster were three-year varsity contributors — Kleinert, Molly Kurtz, Sarah Litrell and Elle Nugent, a group Hagemaster had high praise for.

“It’s gonna hurt,” Hagemaster said. “They’re a good group; they’re tight, and they fight for each other.”

Huston had 12 kills and seven digs to lead the Tigers. Rodgers had five kills and a pair of assists. Jordan Pierce 13 assists, eight digs and the Tigers’ lone ace

The Tigers will host Beecher in the IHSA Class 2A Herscher Regional championship at 6 p.m. Thursday, a Bobcats team that has won 16 of their last 17 matches.

“We haven’t [played] them, and they’re hot right now,” Huizenga said. “We’ll have our hands full, but we’re prepared. It’s what we’ve worked so hard for since this summer is this regional.

The Bobcats picked up that 16th win in 17 matches by holding off a stingy Coalers team in the backend of Tuesday’s double-header for a two-set sweep.

It was the second time the Bobcats bested the Coalers this season after a 2-1 win at the Manteno Invite earlier this season. But Beecher coach Emily Doersam said the earlier victory didn’t affect the most recent one.

“I actually didn’t look at anything in the first match because it was a tournament, we were tired, stuff like that,” Doersam said. “I did come and watch them [against Momence on Monday], and I took a lot of notes on what would work for us, so [the team] got a little homework on the bus ride here.”

That homework paid off for the Bobcats, who went with four outside hitters in their starting lineup and used that offense to edge the Coalers 25-21 in a first set that saw six ties and seven lead changes.

“They make good passes, so they can engage their middles,” Beecher senior setter and right side hitter Kaylie Sippel said of the Coalers. “Their middles are really good and they have a good block, too.”

But according to Coalers coach Pam McMurtrey, the Coalers struggled with handling the Bobcats’ serve, which didn’t give them many opportunities to get the ball to their offensive weapons as much as they needed to.

“Our serve receive, we usually do a nice job on it but struggled with that,” McMurtrey said. “When we did attack and had our bigger attackers hit the ball, they couldn’t stop us. We just needed to pass better.”

Doersam said the lineup she trotted out Tuesday wasn’t a traditional one heavy with hitters; her girls simply play well together and play to their strengths.

“I just I feel like we all kind of help each other out,” Doersam said. “I’ve got [libero] Margaret [Landis] in my back row, digging up anything that comes her way. ... I’ve got one middle [Rhiannon Saller] that can help out my right side and my outside.

“I started out with the strong hitting to try and stay in that rotation. ... I just mesh it, and it all kind of works well.”

Sippel and Landis are two of just three seniors on a young Bobcats roster that has risen to the occasion this season. Sippel said that’s because of the positivity she and her classmates preach.

“We just always try to be positive. ... It just works,” Sippel said. “When we get down, everyone gets down, so we try not to get down.”

Much like the first set, the Coalers hung tough through the first third of the second set before the Bobcats pulled out the last little bit of energy needed to put an end on the second set 25-15, also ending the Coalers’ season in the process, an 18-15 season McMurtrey enjoyed with her group of girls.

“I enjoyed this group a lot,” McMurtrey said. “The seniors were a great group of girls ... great role models for the underclassmen.”

Sippel had nine kills, 10 assists and a dig. Talia Messana had 10 assists and Brittney Mazurek had six kills. Julianna Picicco served up three aces and added two digs. Saller had three kills and a block, and Landis had four digs, a kill and an ace.

Natalie Durham and Hayleigh Roach each had four kills. Durham added two blocks, and Roach had one block. McKenna Fitzpatrick had a pair of kills and five blocks. Sam Hanley had five digs, and Rose Feeney had six assists.