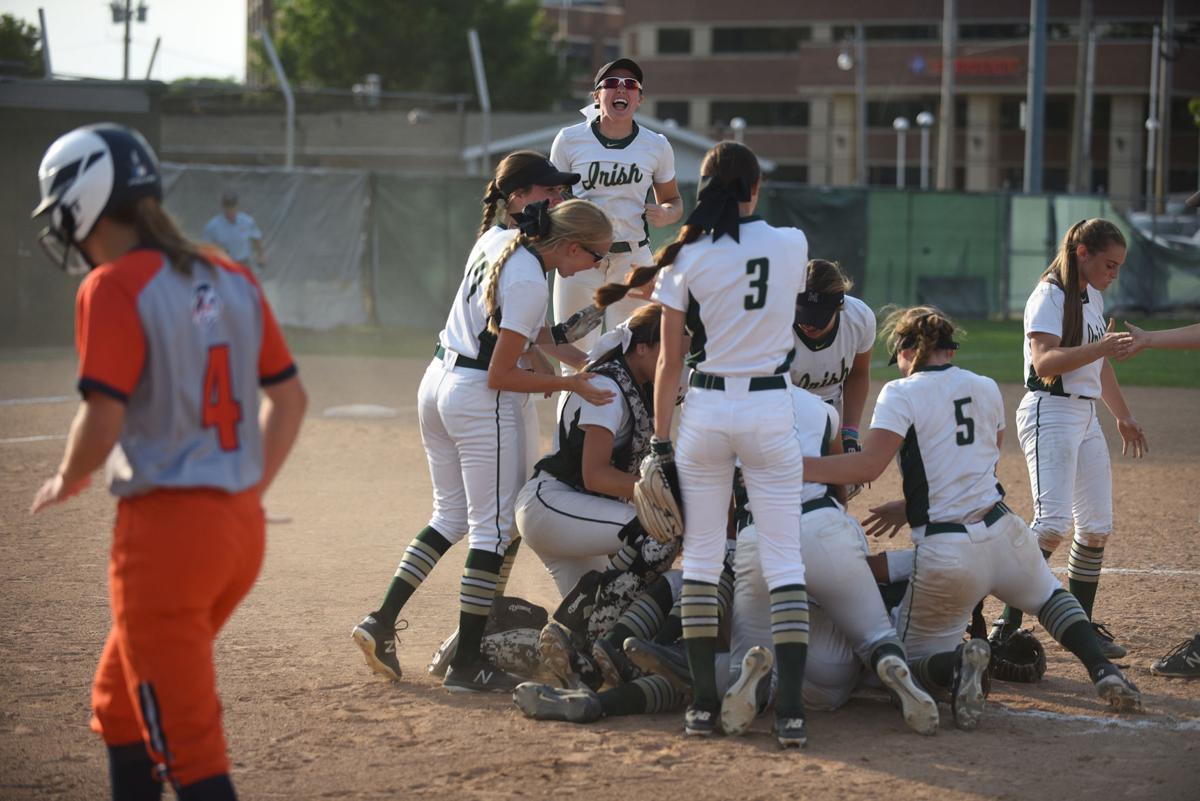 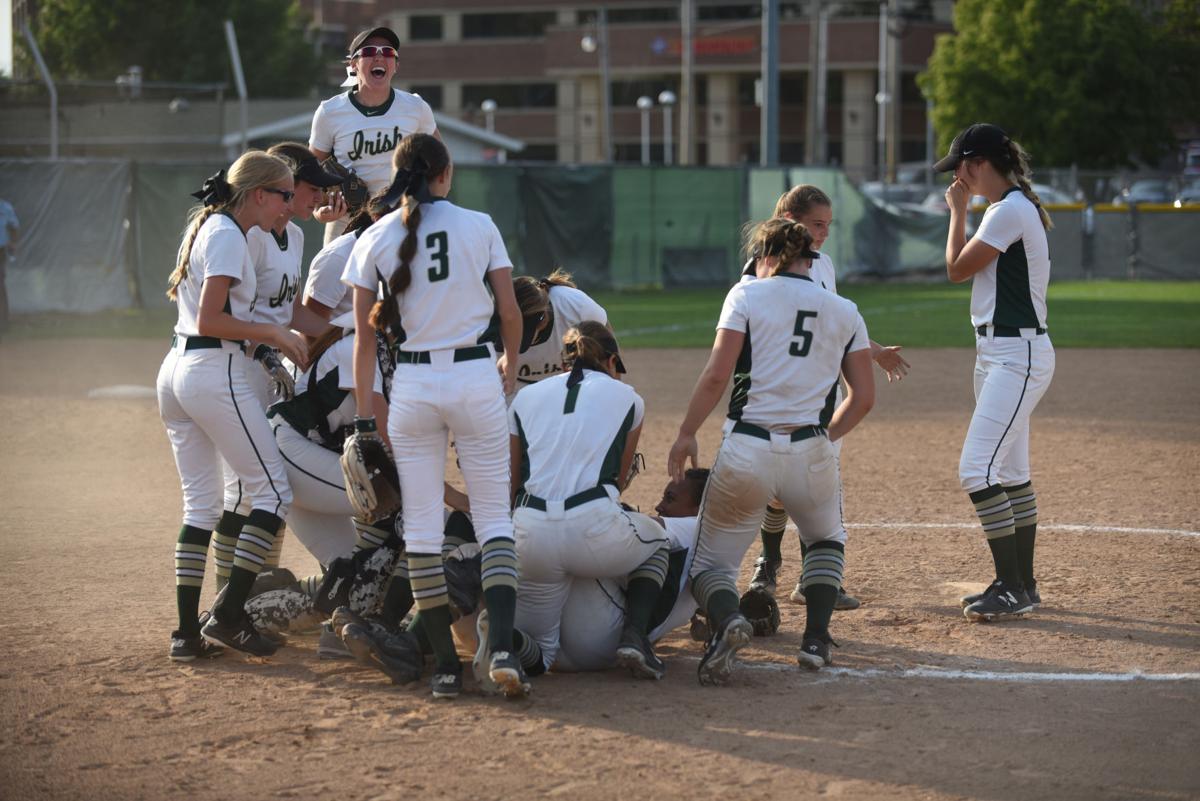 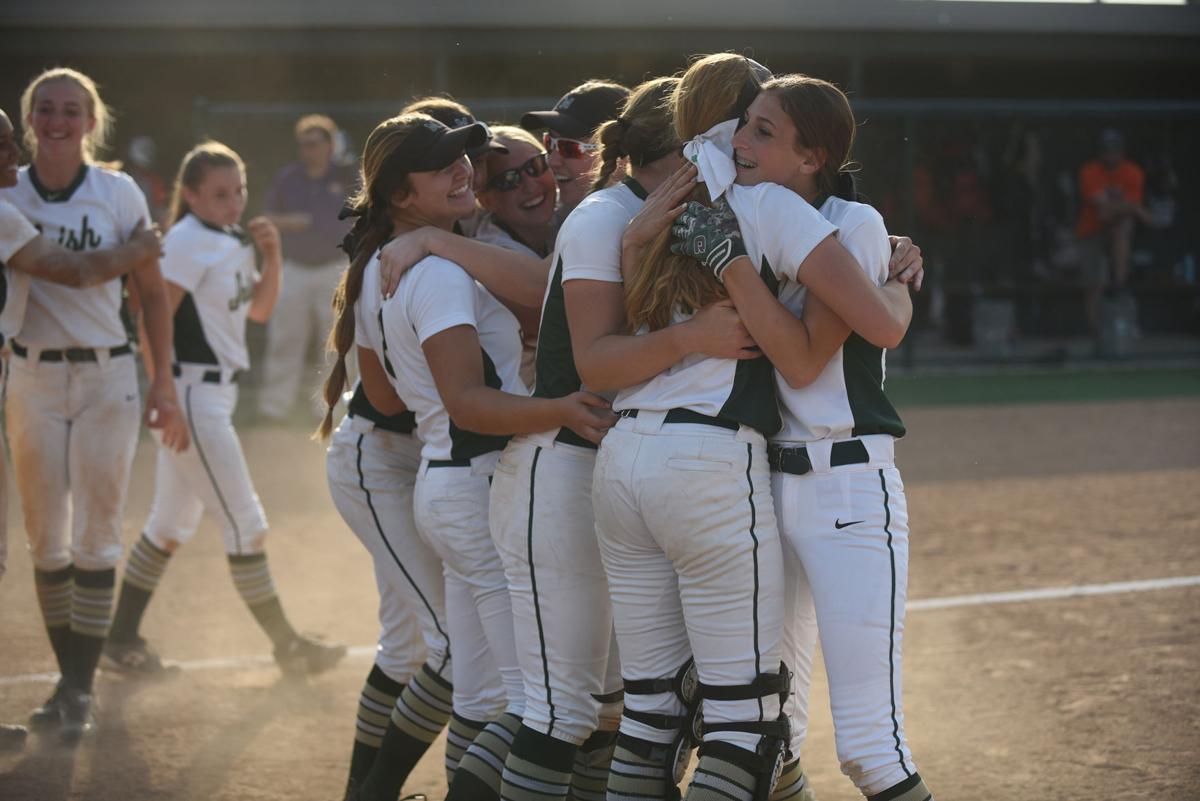 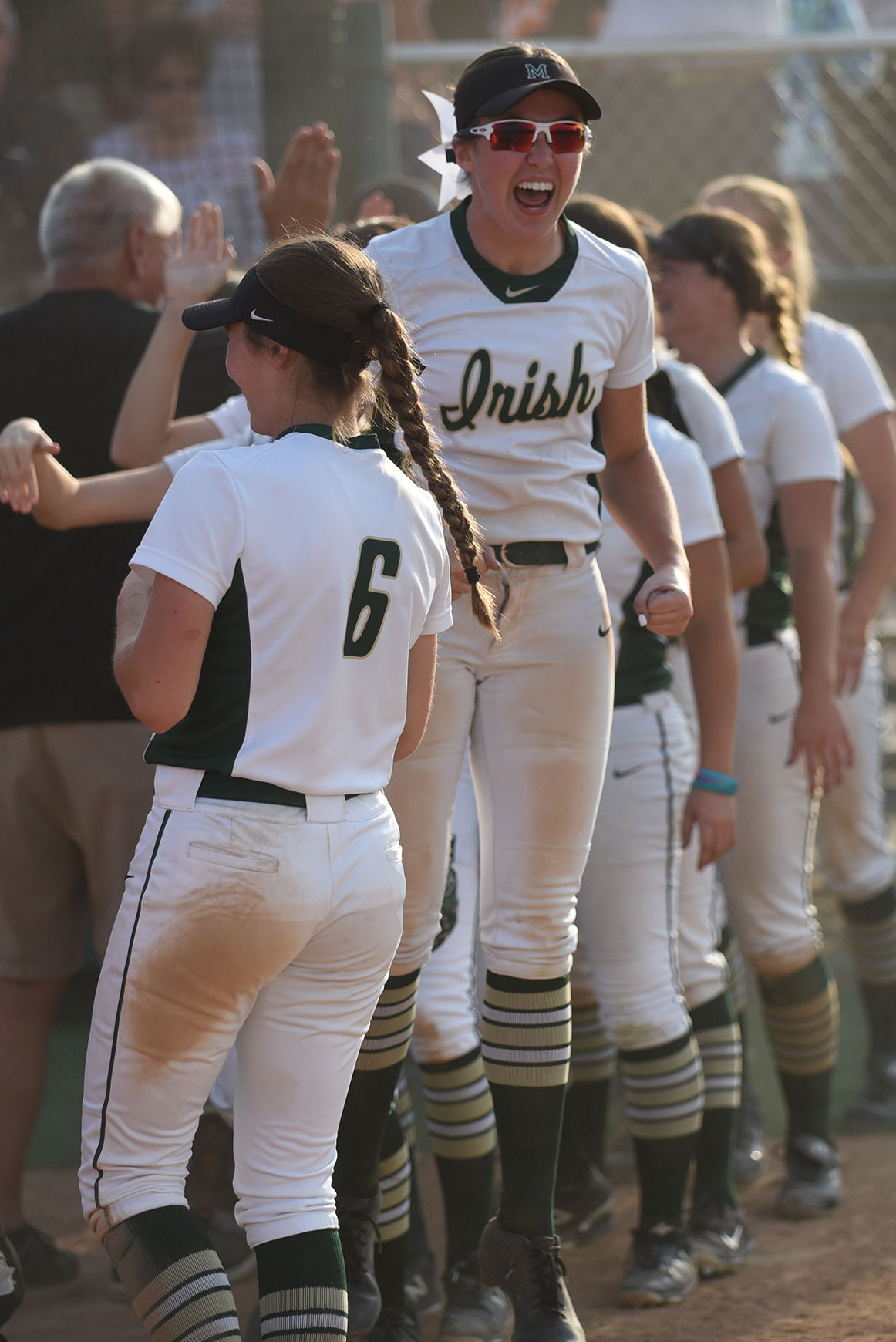 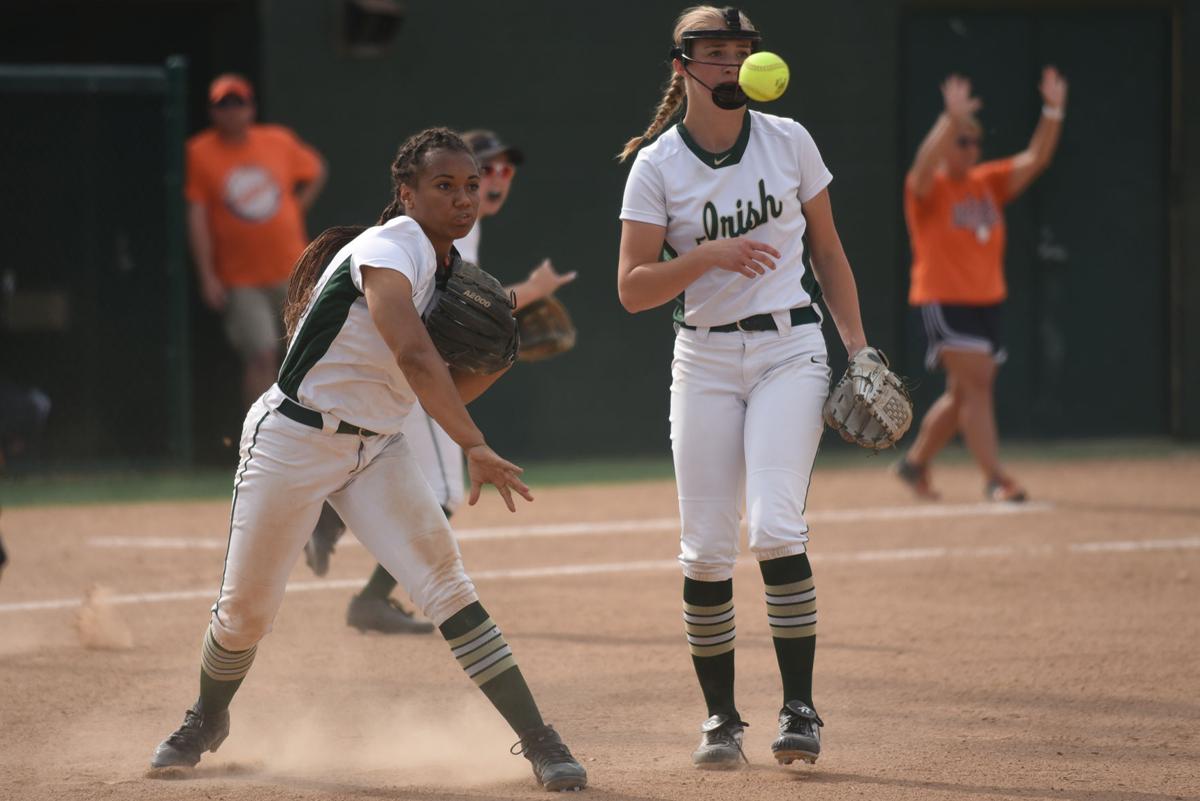 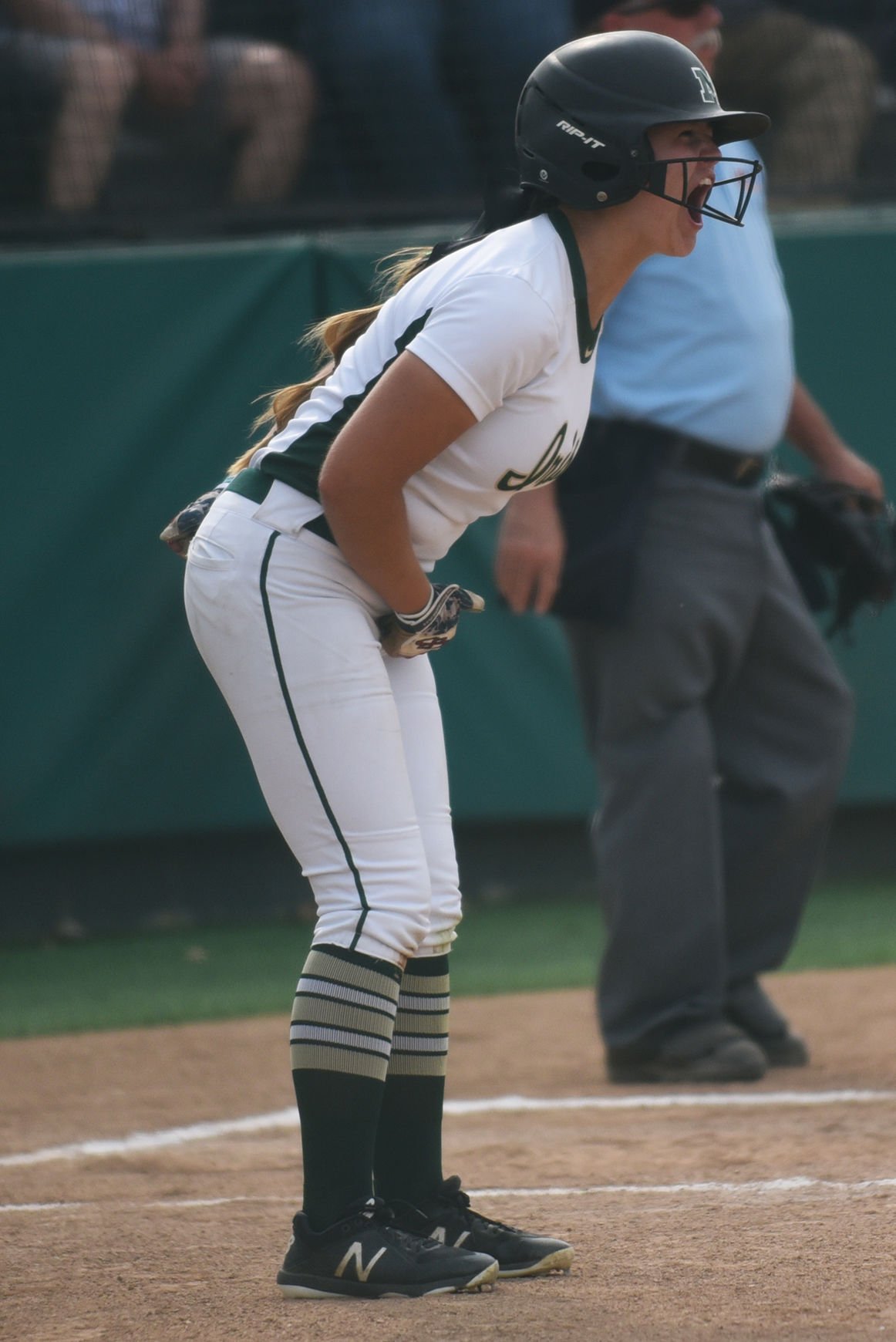 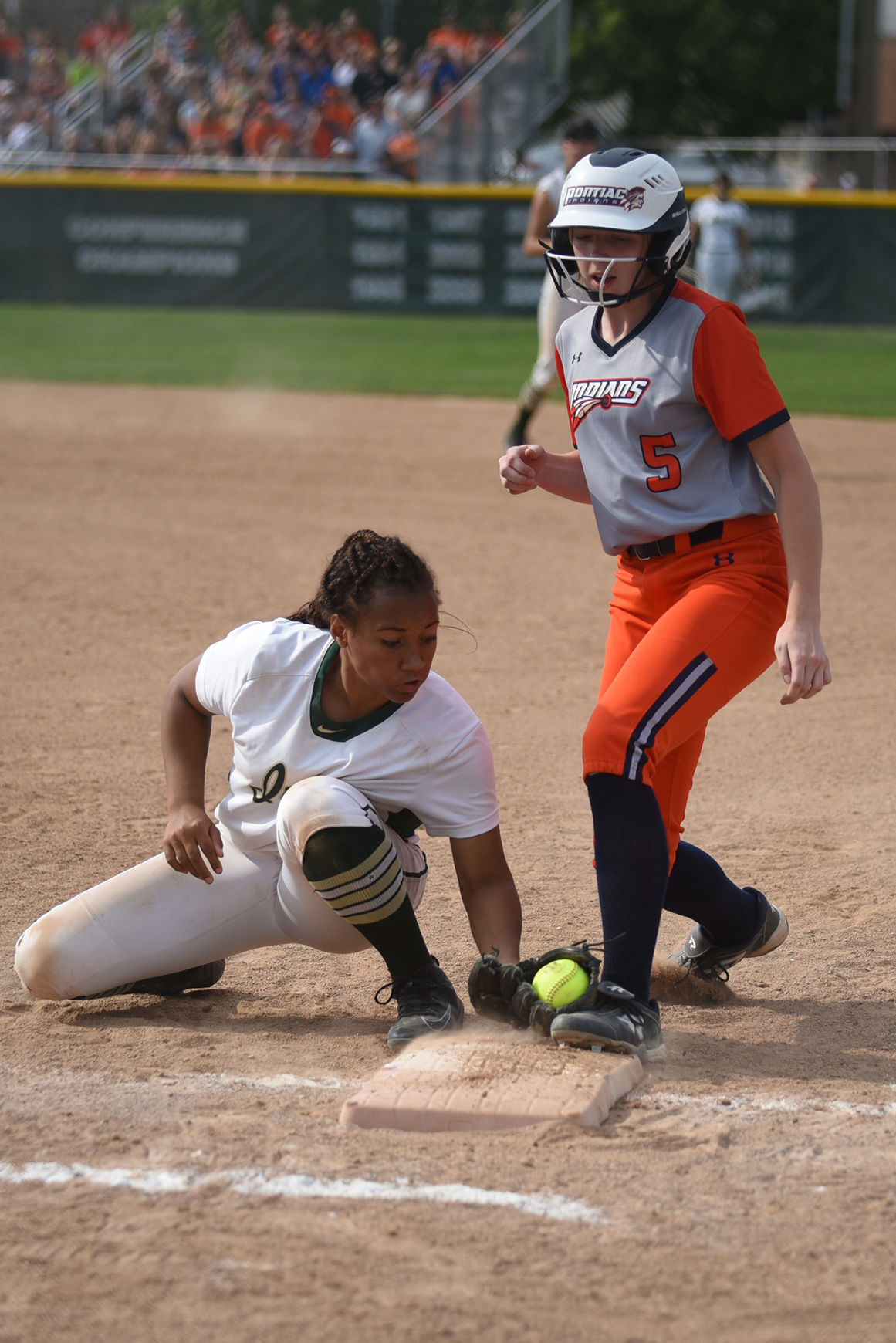 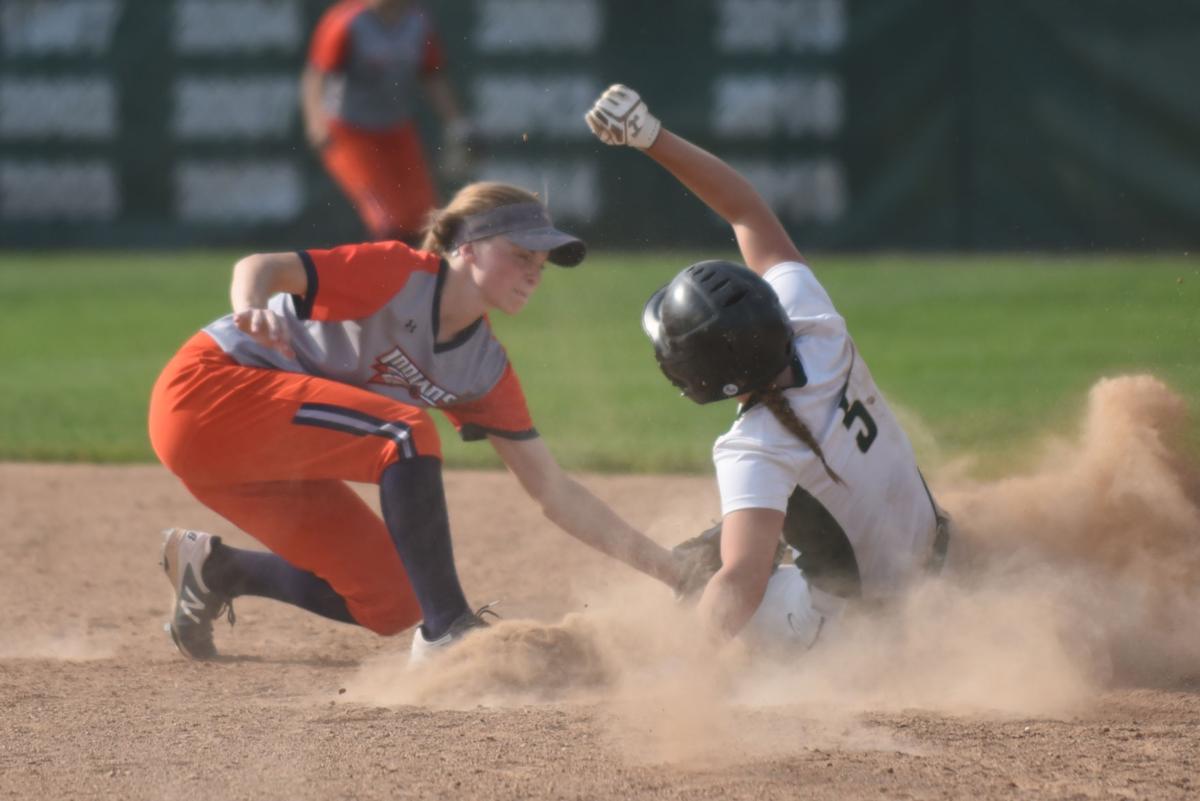 Bishop McNamara’s Kylie Sullivan, right, is tagged out at second base by Pontiac’s Alyssa Fox during Monday’s IHSA Class 3A Bloomington Super-Sectional at Illinois Wesleyan University. 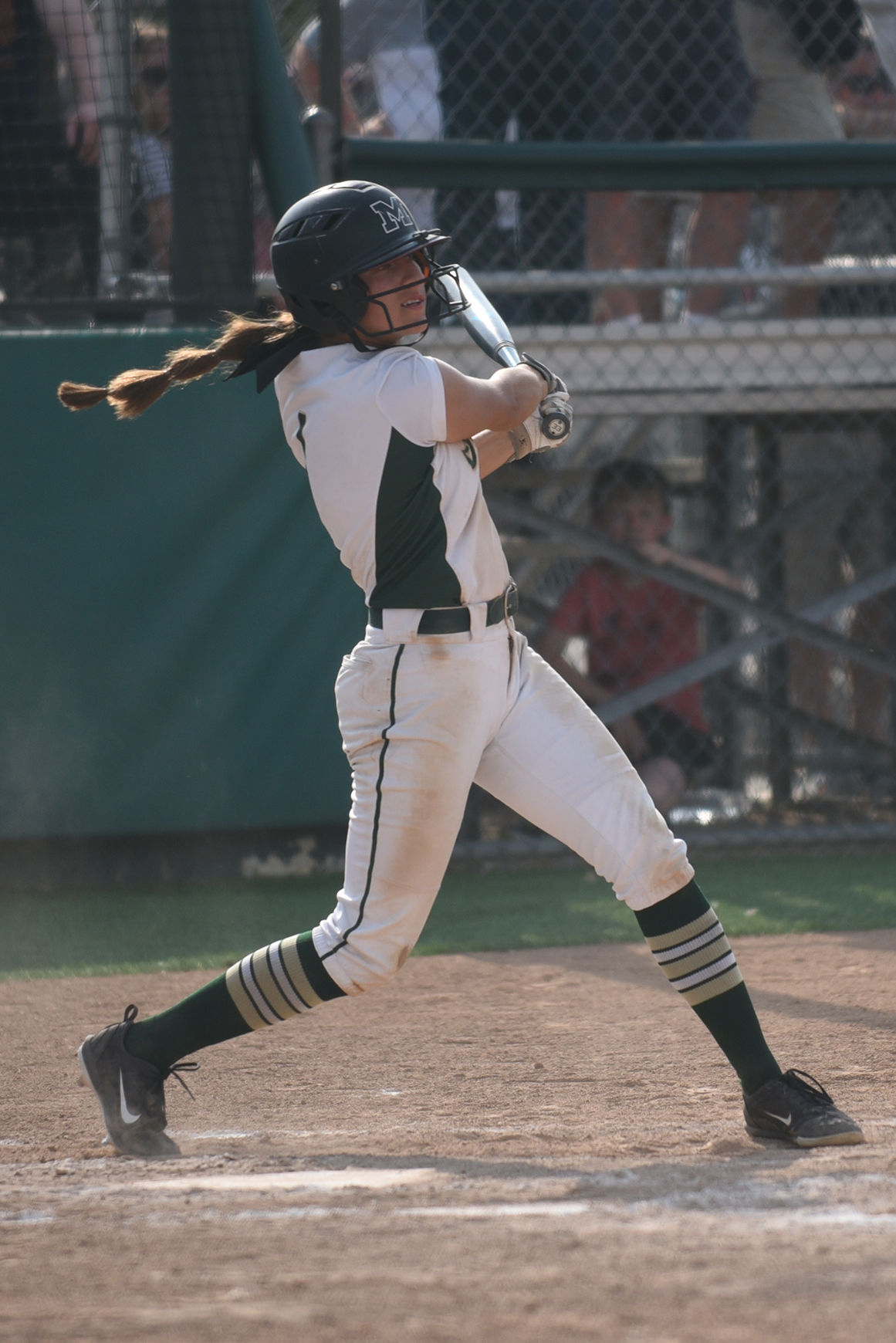 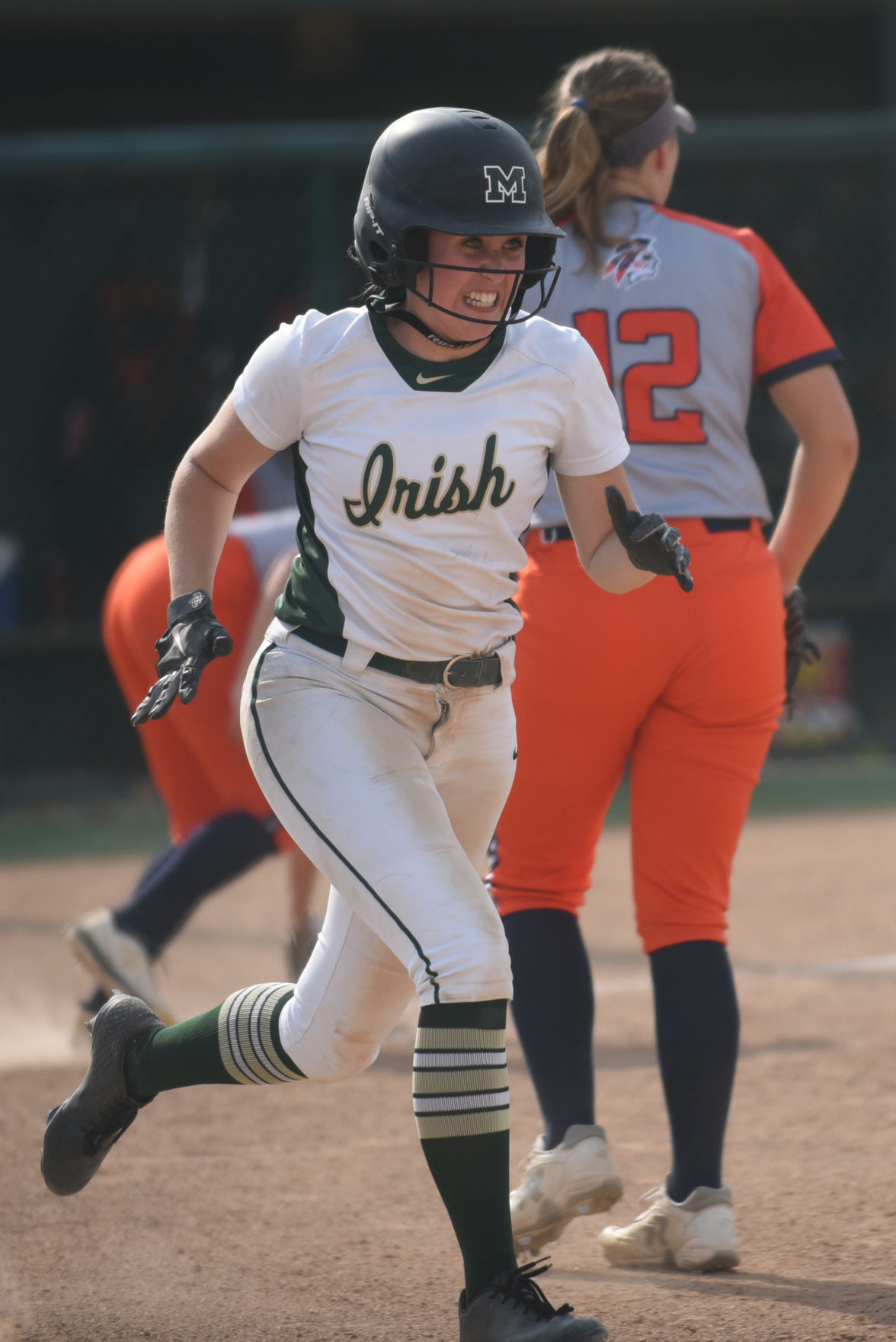 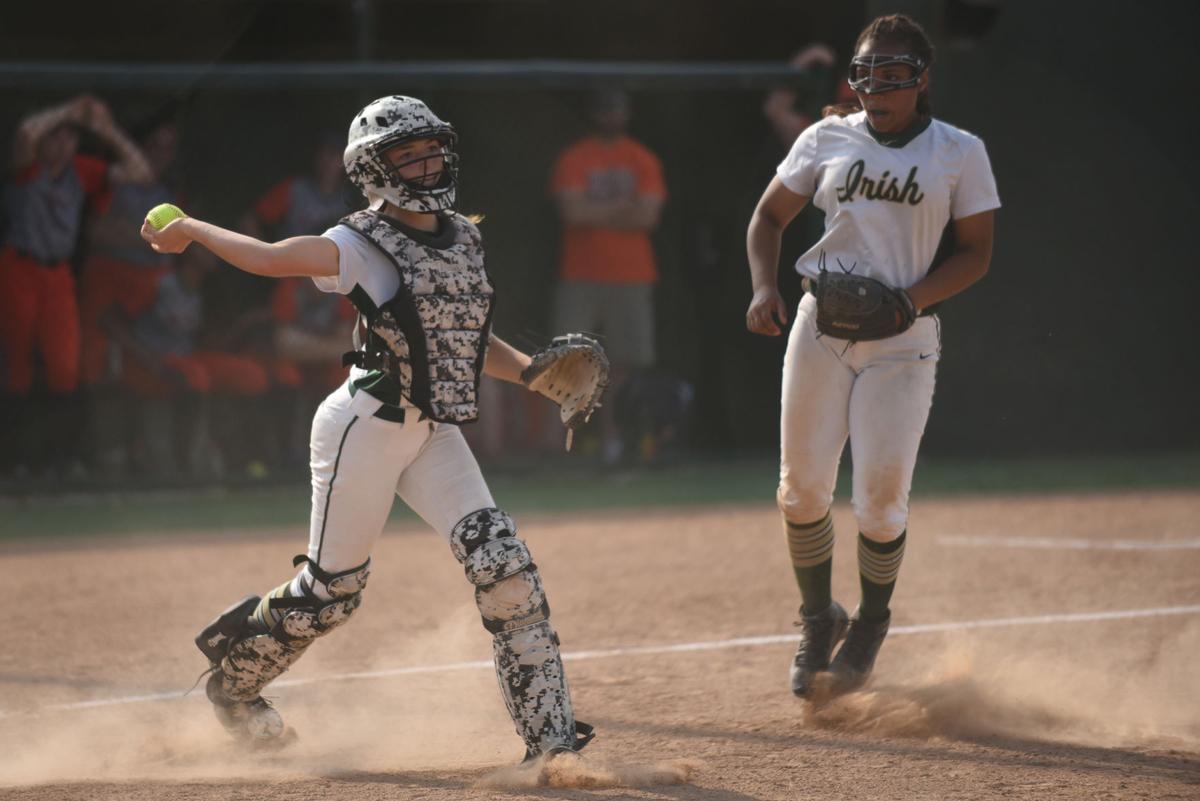 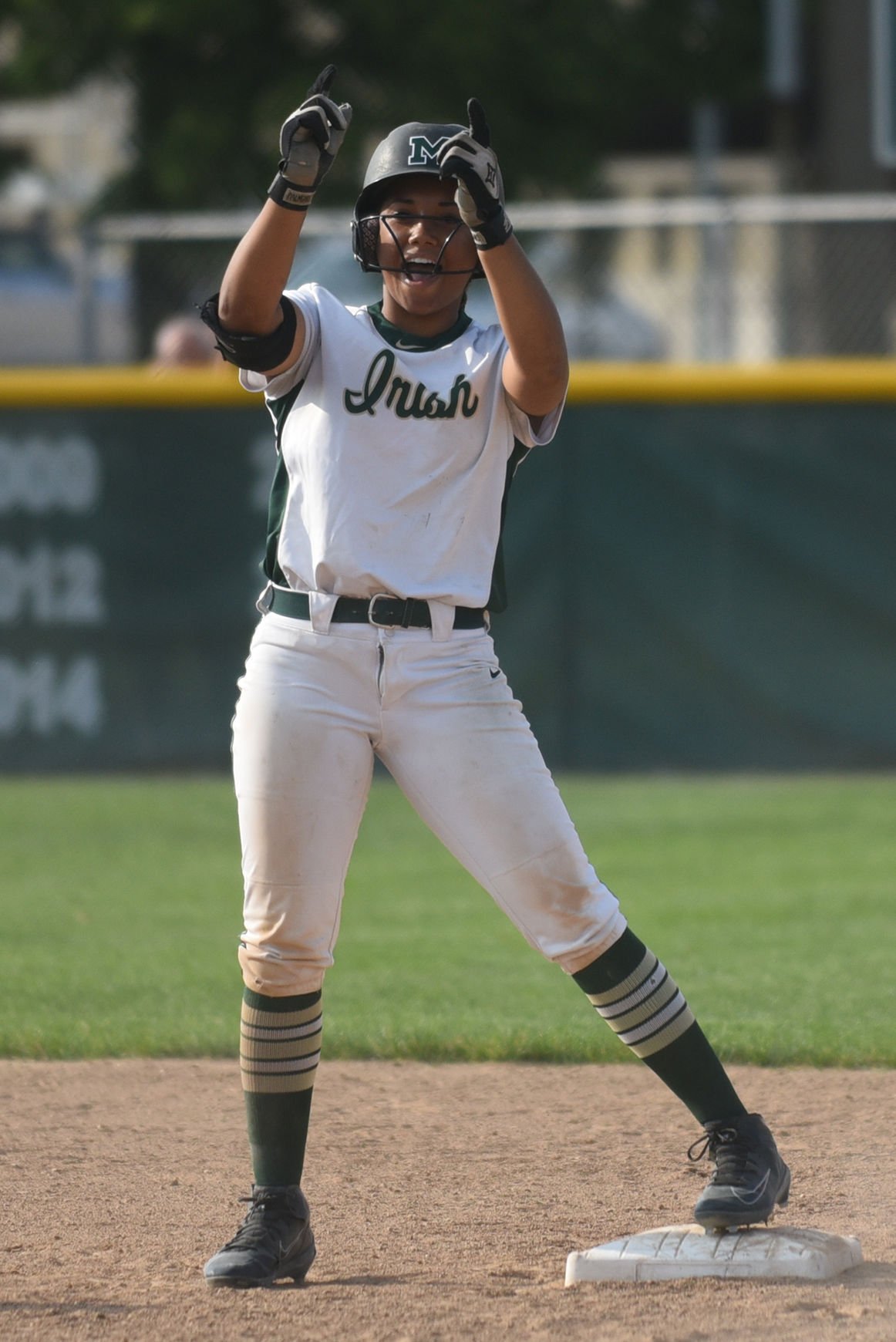 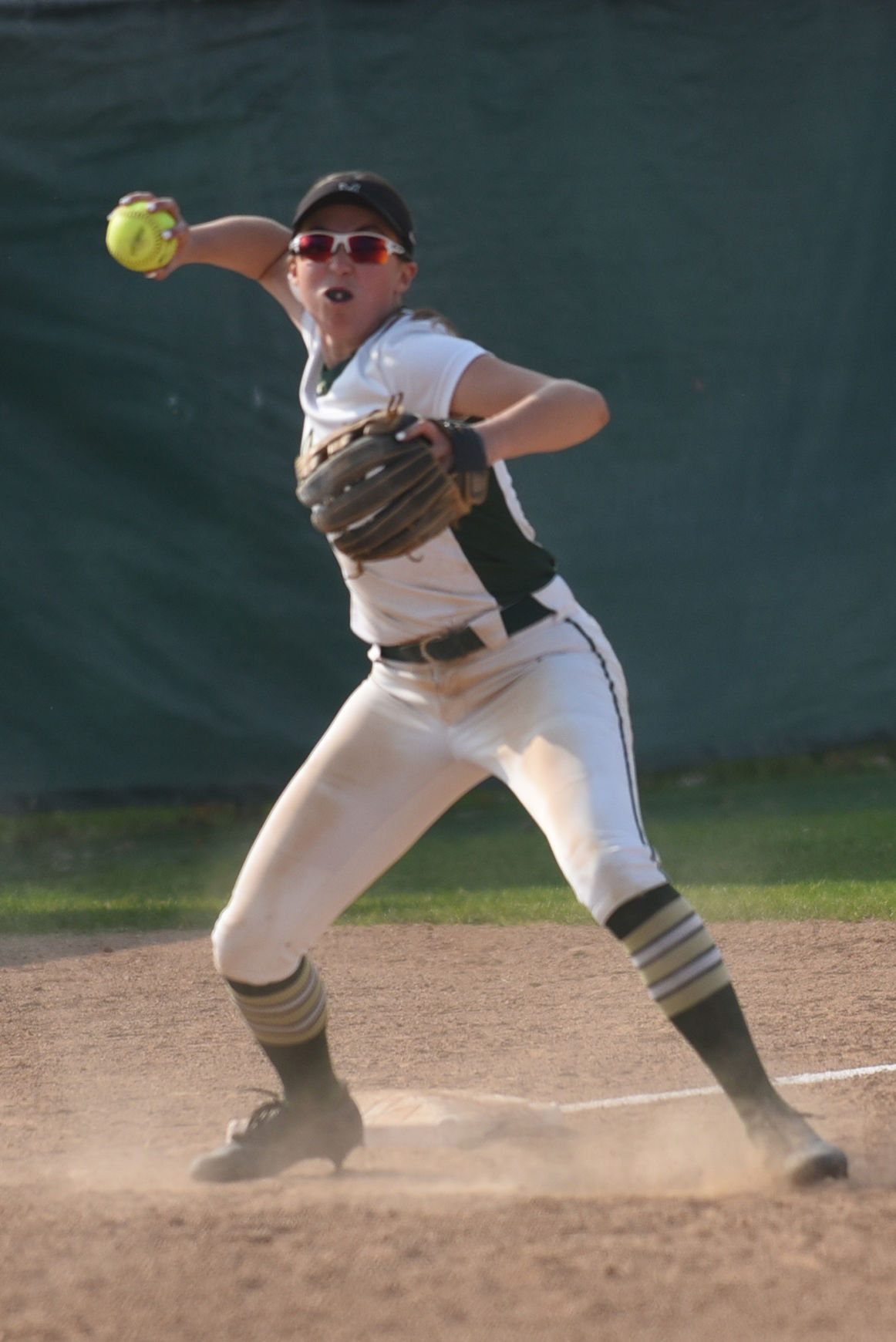 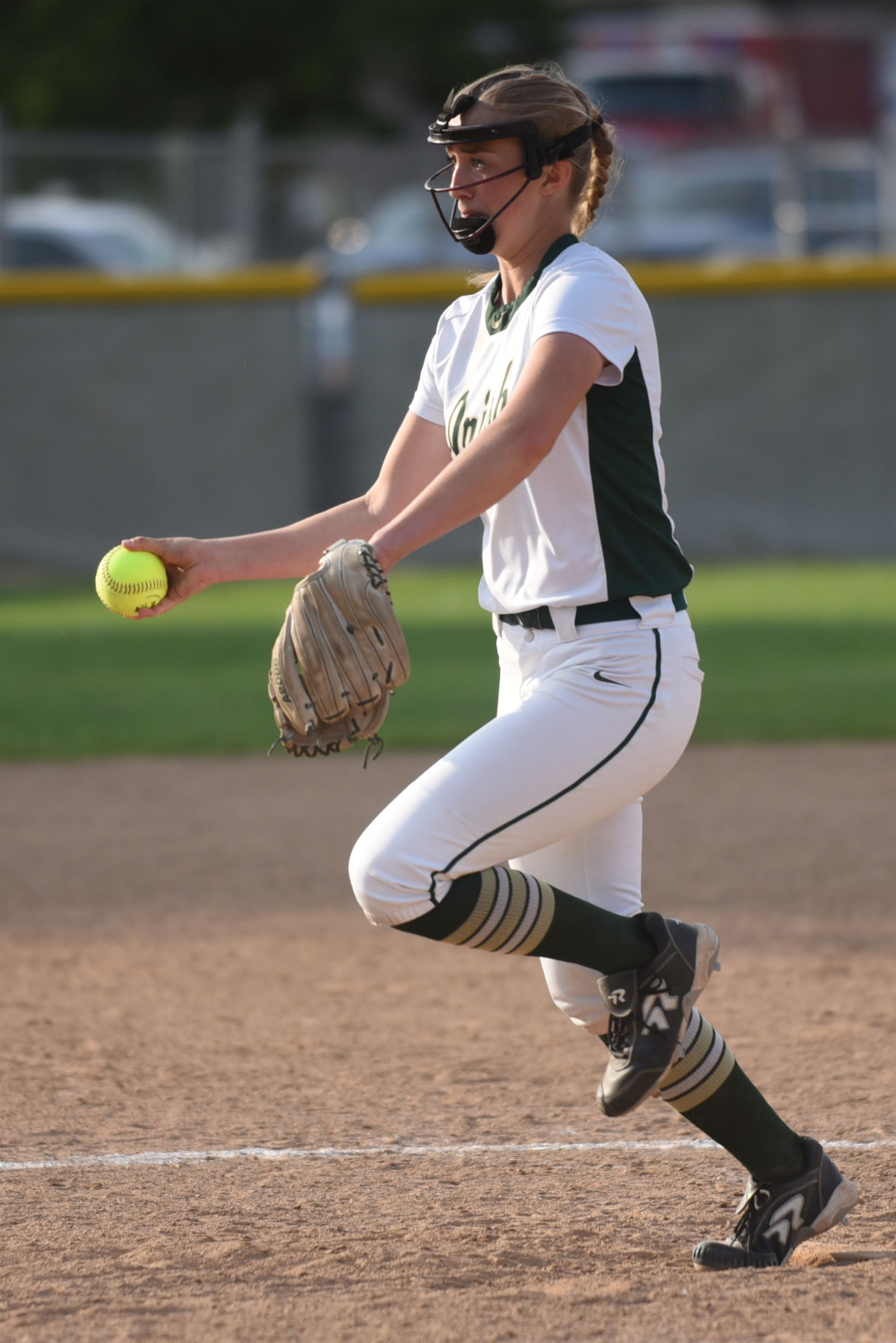 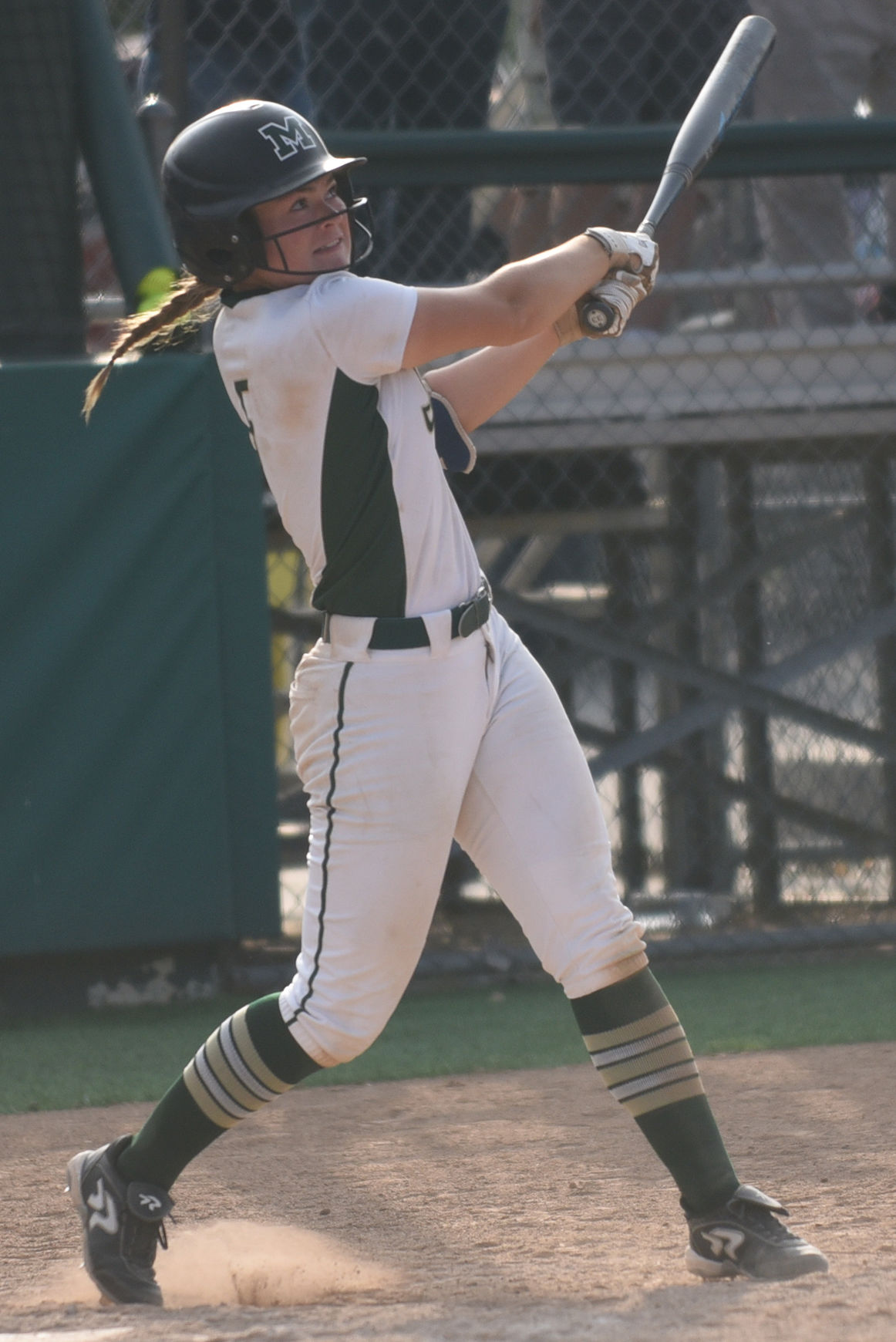 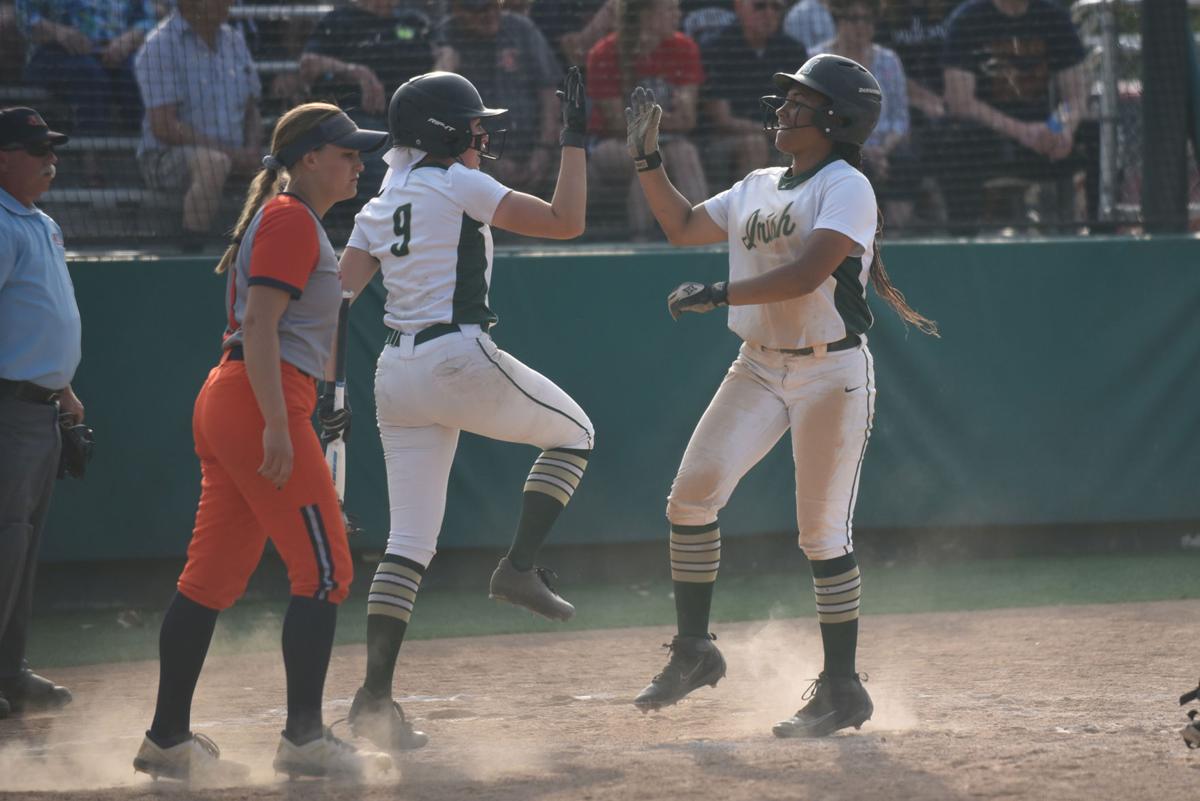 Bishop McNamara’s Gillian McDermott, left, greets teammate Jaelyn Vickery, at after Vickery scored a run McNamara's 8-0 win over Pontiac in Monday’s IHSA Class 3A Bloomington Super-Sectional at Illinois Wesleyan University. The victory advances the Fightin' Irish to the semifinals of the state tournament, where they will meet Wheaton St. Francis at 10 a.m. Friday. For more details, see Sports, Page B1.

Bishop McNamara’s Kylie Sullivan, right, is tagged out at second base by Pontiac’s Alyssa Fox during Monday’s IHSA Class 3A Bloomington Super-Sectional at Illinois Wesleyan University.

BLOOMINGTON — No trip to the state finals ever is easy, but Bishop McNamara’s softball team has faced quite the murderer’s row during its navigation of the IHSA Class 3A postseason, defeating a pair of Top-10 teams in the Illinois Coaches Association poll in last week’s sectional round.

That sectional title set up a date with top-ranked Pontiac in the IHSA Class 3A Bloomington Super-Sectional at Illinois Wesleyan University on Monday, and the Irish answered the bell again, blowing past the Indians 8-0 to advance to state for the third time in school history.

All three state appearances have come since coach Laura Harms took the reins in 2011. She said the current rendition of the Irish has been sparked by an energy that has been unmatched by their more heavily favored opponents.

“We talked about energy, being excited, having fun and having your teammates’ backs,” Harms said. “It’s just being in the game and not letting other teams sometimes suck you down. We need to play our game, have energy and be excited.”

That Irish energy was evident early on, as they put up a pair of runs with a second-inning, two-out rally. After Riley Ford singled and Kenna Kleinert hustled out a dropped third strike, Kara Kleinert sprinted down the first base line on a grounder to shortstop Alyssa Fox.

Her quick sprint down the line forced a hurried throw from Fox that ended up against the fence past the first base dugout, allowing Ford and Kenna Kleinert to score and give the Irish an early 2-0 lead.

Harms said with junior Illinois commit Regan Krause on the rubber for Pontiac, the Irish had to put the ball in play and force the Indians to win the game with their defense, a stark contrast from the past three games that saw the Irish mash a combined five home runs.

“We talked about just shortening up and putting the ball in play,” Harms said. “They have a strikeout pitcher, so they’re not used to making a lot of plays and we have really good baserunners that move and understand it’s not just moving one base at a time.

“We love the big hits, we love when Gillian [McDermott] hits a grand slam like she did in sectionals, but it’s just about putting the ball in play and making their defense work.”

That formula paid off again for the Irish in the second. After infield singles from Jaelyn Vickery and Leigha Campe, McDermott reached on an error to load the bases for cleanup hitter Kylie Sullivan.

Sullivan beat out an infield single to drive in Vickery, and once again, the Irish hustle forced another hurried throw that sailed into right field, this time a throwing error from Krause that allowed Campe and McDermott to cross the plate and put the Irish ahead 5-0.

Campe said with the contagious enthusiasm rolling through the Irish dugout, that’s when she knew the Irish were going to be state-bound.

“I kind of got the feeling when it was 5-0,” Campe said. “We were just rolling off the energy and doing really well.”

The Irish used small ball to their advantage at the plate, and their defense and pitching never allowed Pontiac to find the spark it needed to match the Irish intensity.

Jocelyn Clodi started in the circle for the Irish and pitched the first 1 1/3 innings before swapping spots with first baseman Jaelyn Vickery, a positional change that has become commonplace for the Irish during the postseason.

Vickery came in and was effective from the first pitch. She quickly got out of a two-on, one-out jam she inherited with a pair of flyouts and then cruised through the game without allowing a hit until the sixth inning.

She said her effectiveness came from a few different things but mainly the sharp defense behind her, as only two of the 14 outs Vickery recorded were via strikeout.

“I was noticing that [the Indians] weren’t swinging early, so I was just trying to get ahead,” Vickery said. “I also really focused on driving my legs and getting velocity because they were late on a lot of swings.

“And I just kept the ball low because my defense was awesome today.”

After a couple scoreless innings themselves, the Irish found a second wind in the final two innings, scoring a total of three runs in the final two frames. That gave the Irish their 8-0 lead, which was secured after Clodi re-entered the circle and recorded the game’s final three outs.

The Irish have played their best softball of the season during the past month, going 12-2 in that span, including a seven-game winning streak.

Harms said the Irish sparked their own sort of resurgence before their regional championship game against Manteno, a game they won 11-4 and have been riding high ever since.

“They were nervous coming into the Manteno game and I told them, ‘Tell me why you’re nervous, and I’ll be the devil’s advocate and tell you why you shouldn’t be nervous,’” Harms said. “They said, ‘We’re not playing well,’ because my thing is playing right at the right time.

The state berth — and potential championship — has been the feather in the cap of the most successful spring season in McNamara history. The girls soccer team won its first-ever regional, the baseball team won its first sectional in 25 years, and now the softball team has found itself with a ticket to state.

Vickery, whose father, Mike, is an assistant football coach, said the desire for the Irish to reach state came after the football team advanced to their state championship game in November.

“After my dad and the football team went [to state] and had a great season, I said, ‘Dad, football isn’t the only team going to state this year,’ and it happened,” Vickery said. “It’s great, and I’m excited for this weekend.”

Vickery and Ford each had two hits and two runs. Kara Kleinert and McDermott each had a hit and an RBI, and Sullivan’s three RBIs led the way for the Irish offense.

In the circle, Vickery allowed three hits and no walks in 4 2/3 innings, and Clodi tossed 2 1/3 innings and allowed a hit and two walks.

The Irish play at 10 a.m. Friday in East Peoria, where they will take on Wheaton St. Francis, a Metro Suburban Conference rival they split a season series with, in the IHSA Class 3A State Semifinals.

Kara Kleinert said the Irish don’t have any plans to stop their winning ways before they take home the state championship.

“It just feels amazing, and I just want to go and do the thing with this team,” she said. “It’s our one chance to do it, so I think we’ve got it this year.”

The Irish were defeated 4-2 by Mt. Zion in Saturday's third-place game.