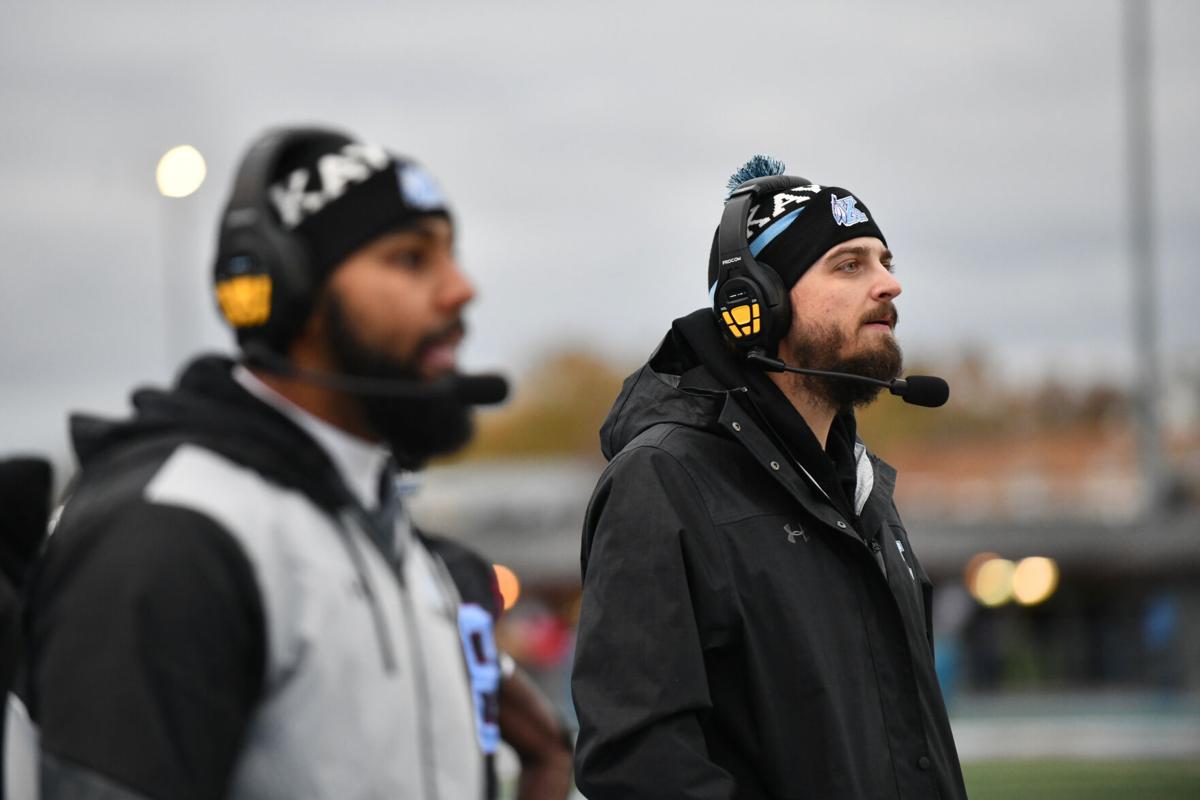 Kankakee head coach Derek Hart, right, watches the defensive line Nov. 14 during the Kays' 44-38 victory against Marion in the IHSA Class 5A quarterfinal playoff game at Kankakee High School. Hart and his Kays will be playing for the IHSA Class 5A state championship against Fenwick on Saturday, a day after his brother, Nick, coaches for a state championship in Indiana. 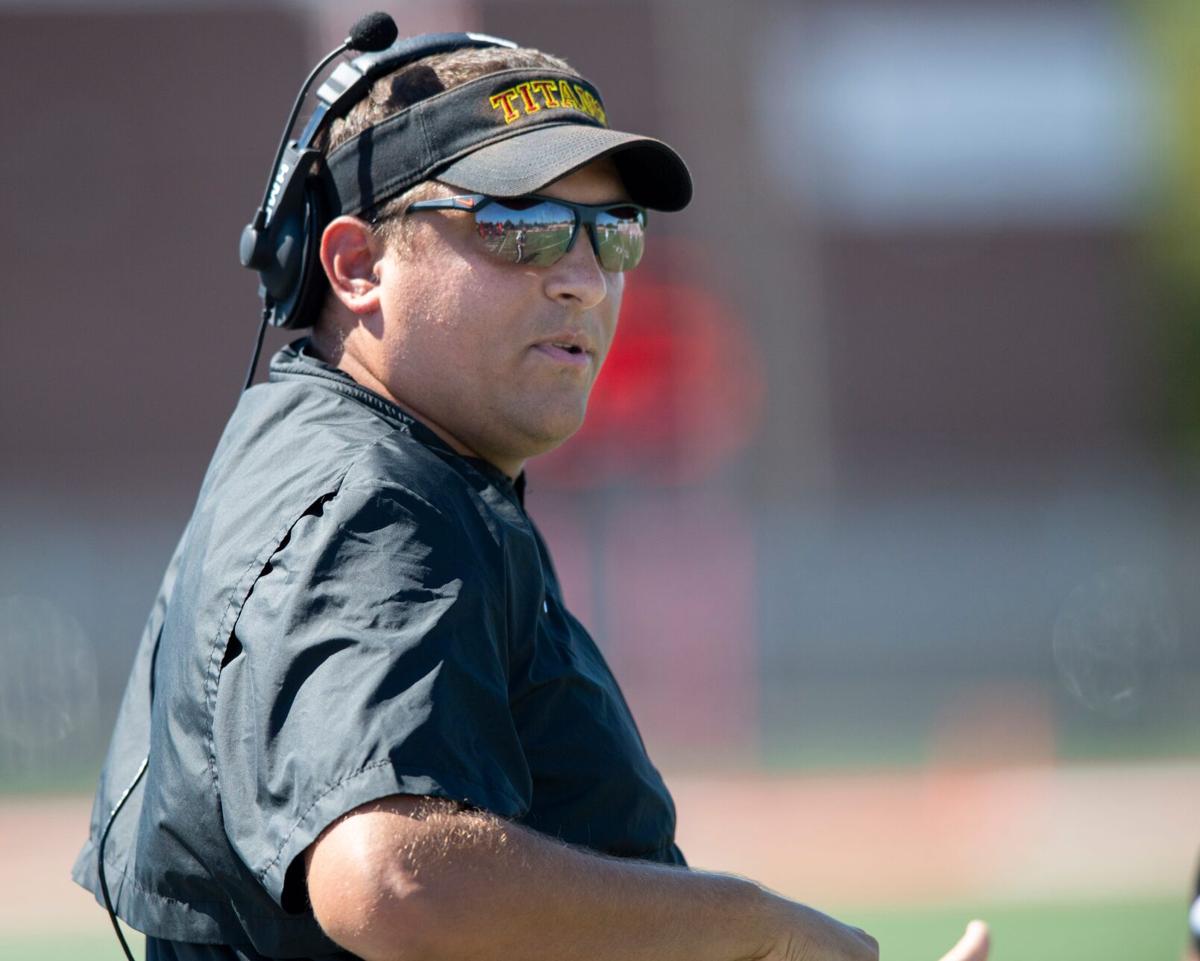 Nick Hart coaches at Gibson Southern High School in Indiana, which plays Brebeuf Jesuit on Friday in the Class 3A state championship in Indianapolis.

Kankakee head coach Derek Hart, right, watches the defensive line Nov. 14 during the Kays' 44-38 victory against Marion in the IHSA Class 5A quarterfinal playoff game at Kankakee High School. Hart and his Kays will be playing for the IHSA Class 5A state championship against Fenwick on Saturday, a day after his brother, Nick, coaches for a state championship in Indiana.

Nick Hart coaches at Gibson Southern High School in Indiana, which plays Brebeuf Jesuit on Friday in the Class 3A state championship in Indianapolis.

The football doesn’t fall too far from the coaching tree. For the Harts, the tree was in their backyard.

Derek Hart and his Kays face Fenwick at 10 a.m. Saturday at Huskie Stadium at Northern Illinois University in DeKalb for the IHSA Class 5A state title game after Nick Hart and Gibson Southern battle Brebeuf Jesuit at 2:30 p.m. Friday at Lucas Oil Stadium in Indianapolis, Ind., for the IHSAA Class 3A championship.

Derek, 30, and Nick, 36, are the sons of legendary coach John Hart, head coach of the Brownsburg (Ind.) Bulldogs, who previously won state titles at Evansville Reitz in 2007 and at Warren Central (Indianapolis) in 2009.

“So proud of the boys,” said John Hart in a story in the Indy Star newspaper.

Nick posted on his Twitter account Saturday, “Congrats @CoachHartKHS on a trip to the state finals! Proud of you little bro!”

Although six years apart in age, Derek and Nick have developed a special bond. Nick was an assistant coach at Warren Central when Derek was starting quarterback for the state champion Warriors in 2009. They live about 230 miles apart, with Nick in Fort Branch in southern Indiana, but they stay in constant contact.

“We always text after the game, congrats or whatever, and every now and then we’ll ask a question about, ‘What do you run against this or that?’” Derek said. “Kind of just bounce ideas off each other.”

The Kays and Titans run similar offenses. The Titans pretty much completely run a spread offense, with Purdue recruit Brady Allen at quarterback, and the Kays like to mix in the running of Demere Turner, Nate Hill and Jyaire Hill to go along with the passing attack of Tomele Staples.

“Me and my dad run a lot more similar stuff than me and my brother, but it’s still similar schemes,” Derek said.

Nick is proud of what his brother has accomplished in three years as head coach of the Kays.

"For him to be able to do it that fast and to turn it around like that, it's pretty impressive," he said.

Nick will be there in spirit on Saturday.

"I'm going to stream it," he said. "Win or lose [for us], we'll have some activities here with our team and community. ... Otherwise, I'd be there."

Derek came to the realization at an early age he eventually would end up in coaching just like his older brother.

“We both wanted to be coaches since we were playing in high school, and then, obviously, [Nick] coaching me when I was in high school, this made me even moreso want to get into it,” Derek said.

John Hart has developed a close relationship with the Kays, having helped his son out during the spring season, and he’s been at the past three Kays’ playoff wins this fall.

Derek said his dad has been a rock all season and has been breaking down film of Fenwick this week.

“I talk to him all the time,” Derek said. “He’s been blowing me up all day about what he’s seen on film, so he’s a huge piece for me. He has always been there for me.”

John Hart has compiled a 316-97 record in 37 years in coaching, which also included stops at Edwards County and Mt. Carmel high schools in southern Illinois and at Huntley High School in McHenry County. Nick played for his dad at Mt. Carmel.

Although Derek’s coaching style is a lot more laid back than his dad’s, they’ve forged a real close father-son relationship.

“He’s won two state championships, and I was a part of both of those teams, so all the big moments we’ve been able to share together, whether it be as a player or as a coach,” he said.

The Hart boys will get to celebrate Thanksgiving together at Mom’s and Dad’s home in Brownsburg before the parents make the trip to Indy on Friday for Nick’s Titans and to DeKalb on Saturday to watch Derek’s Kays. After their state semifinals conflicted with each other last Saturday, when their boys play for championships on separate days this weekend, the parents won’t miss a play.

“So, it’s actually going to work out,” Derek said.