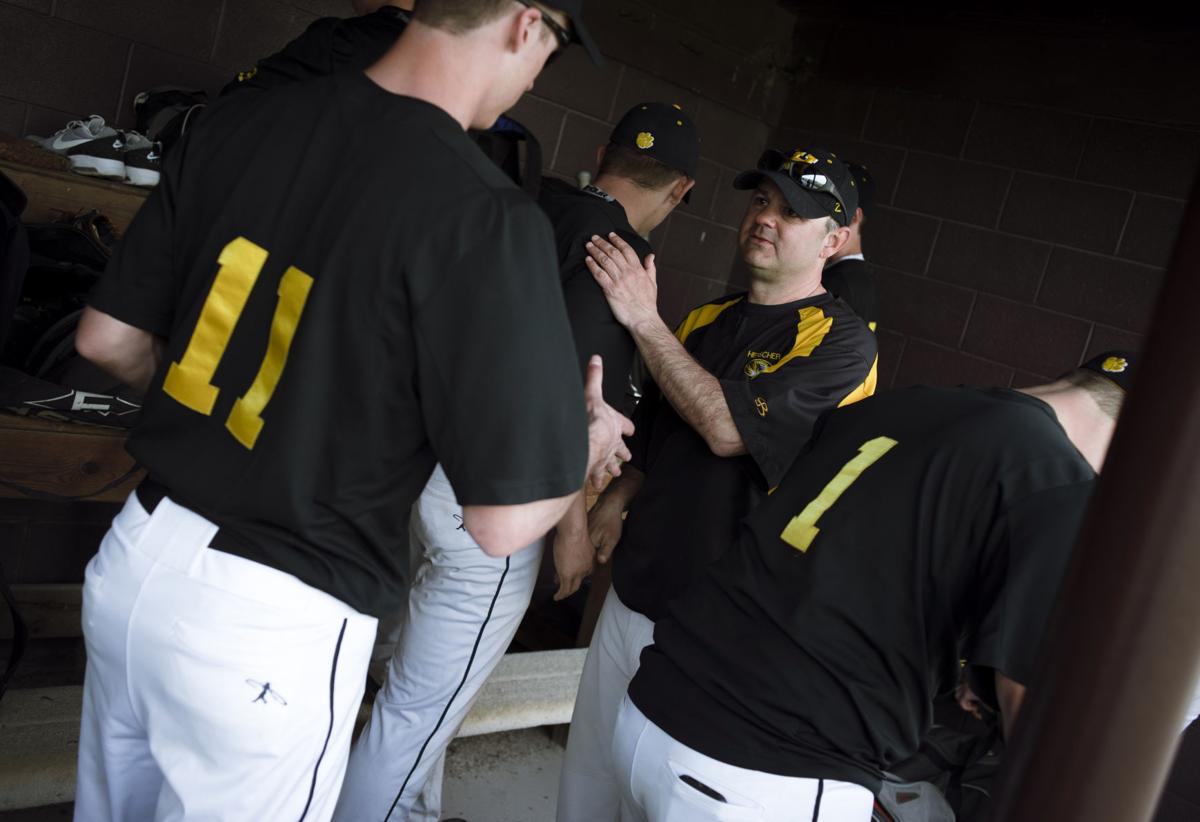 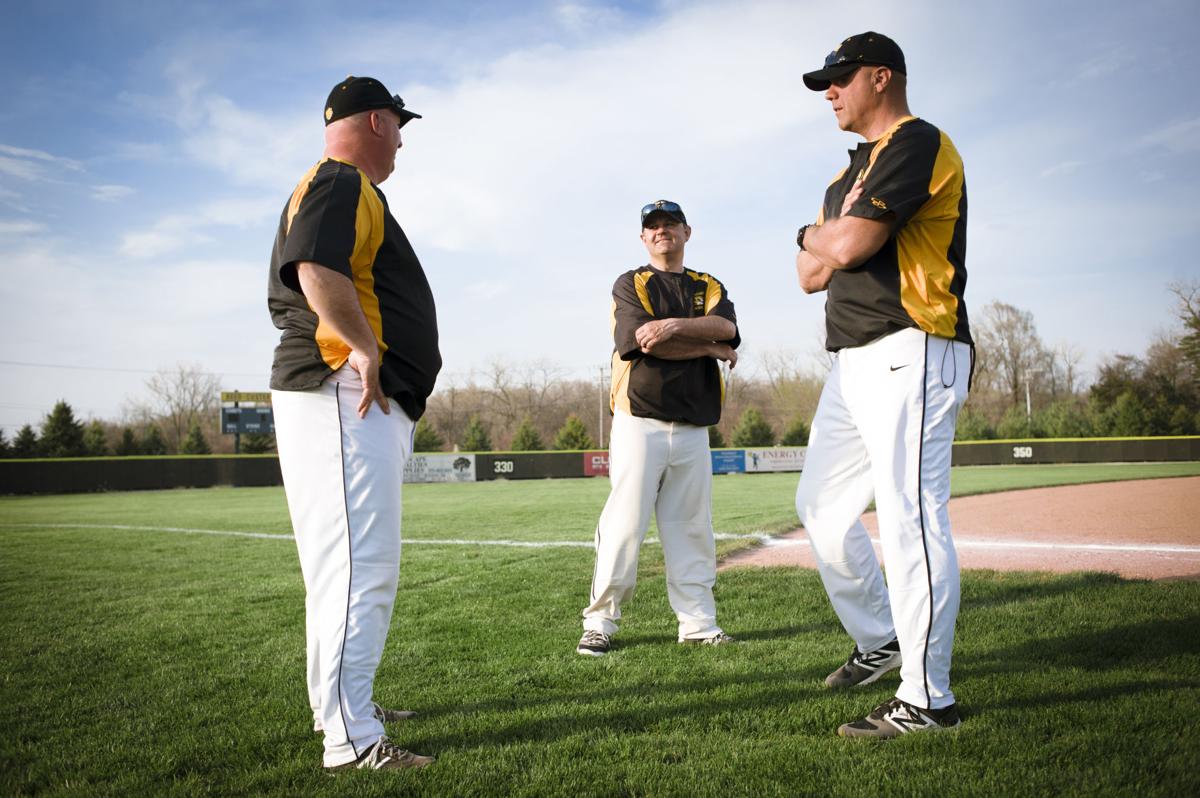 One doesn’t have much trouble determining which classroom at Herscher High School belongs to social studies teacher and baseball coach Eric Regez.

Milwaukee Brewers, Milwaukee Bucks and Green Bay Packers banners take up half of the back wall. The rest of the back wall proudly displays Herscher’s baseball banners, and the front wall features collages and plaques representing some of the Tigers’ best moments and players.

Of course, his room is just feet from the exit that leads to the baseball field.

This will be the 27th season Regez makes that short walk every day. During his first 26 years, Regez and his teams have made four Illinois High School Association State Finals appearances, including last season. The 1999 Tigers were crowned state champions. They have played in 24 straight regional championships, winning 17 of those, including the past nine, and have won at least 20 games in each of those 24 seasons.

Regez has racked up numerous individual awards, including a 2013 induction into the Illinois High School Baseball Coaches Association Hall of Fame. He also won his 700th career game last season in a 6-5 victory against Reed-Custer.

Now he has award, as Regez has been named the 2018 Daily Journal Men’s Sports Citizen of the Year.

“I’m extremely humbled to rep the area, to receive a prestigious award like this through a successful newspaper,” Regez said. “The key thought that comes into my mind with the title of the award is that one thinks real quickly how special sports are in the Kankakee area, so to represent the Kankakee area in that capacity is very humbling.”

Regez’s coaching career began as a fifth-year senior at the University of Wisconsin-La Crosse in 1991, when he served as an assistant coach at Western Technical College in La Crosse.

He said the choice to teach and coach for a career was not difficult to make.

It is becoming less commonplace by the year for a varsity sports coach to also be a teacher in the same school, but Regez said he thinks being able to form that extra bond both on the field and in the classroom is something that can’t be replicated.

“I really like the relationship concept of establishing a relationship in the classroom, and the student-athlete can realize you care about that relationship and take that out to the field,” Regez said. “Sometimes, if you skip that step, it can become a little bit skewed as a result.”

That step hasn’t been skipped for the Tigers under Regez’s control, and neither have many other steps in his 27 years. Regez said he attributes that to the consistency in his staff, such as sophomore coach Craig Bisaillon, who is set to start his 19th season in that role, and varsity pitching coach Todd Wolter, who will start his 12th season as Regez’s right-hand man.

Bisaillon also played for Regez before becoming a coach, adding another level of depth to their camaraderie.

“He hit a big home run in 1995 to send us to state, so he has some folklore,” Regez said. “Nobody bleeds black and gold more than coach Bisaillon.”

Whether during his time as a player or as a coach, Bisaillon said Regez’s ability to have fun while seriously teaching the game is what’s made him so successful.

“The most important thing I’ve learned from him over the years is to play the game the right way while also having fun along the way,” Bisaillon said. “His ability to connect with his players on and off the field allows him to accomplish these goals year after year with great success.”

Regez said the fun Bisaillon spoke of is what happens when the necessary hard work, from both players and coaches, is put in.

And the Tigers’ continuity in the dugout has made its way into the main office at the school. Principal Brad Elliot played for Regez, including serving as the backup catcher his freshman year when the Tigers won their 1999 state championship. And before becoming principal, Elliot also served as an assistant coach under Regez.

Elliot said he didn’t realize the qualities that made Regez such a great coach while playing for him, but it didn’t take long once he came back as an assistant to understand.

“As a player, I didn’t realize the method to his madness; I just knew it was fun, and we won a lot of games,” Elliot said. “There have been lots of really good players, but he has been the constant; I think it’s because he’s consistent.”

Out of all the moments and memories he has made during his time at Herscher, Regez said it was coaching his sons, Evan and Tanner, that always will stand out the most.

“I don’t think I can compare it,” Regez said. “Your accomplishments are over in this section of your success, and getting to coach your kids is a whole different level — it can’t get better than that.”

Evan Regez, the older of the two brothers, graduated from Herscher in 2013 and was the catcher for the Tigers’ 2012 third-place team. Evan said the apple doesn’t fall far from the tree, especially in high-pressure moments.

“I’ve realized how much he taught me about handling pressure and big moments — my best highlights of my baseball career have come when the game is on the line and the pressure is on,” Evan Regez said. “This is when he is at his best as well; I don’t think that’s a coincidence.”

Tanner, a 2016 Herscher graduate and owner of one of the program’s biggest moments — an RBI base-hit to help the Tigers knock off Lincoln-Way West for the 2016 IHSA Class 3A regional title — said he is most thankful for the environment he was able to grow up in under his legendary father.

“I’m thankful for the teacher-coach environment I grew up with my father,” Tanner Regez said. “He would always remind me that he would switch spots with me in a heartbeat if it meant he could go to school and practice again.”

Although he has been one of the most successful baseball coaches in IHSA history and has earned the praise of nearly everyone he has come across in the sport, Regez said when it comes down to it, his approach has been simple and steady.