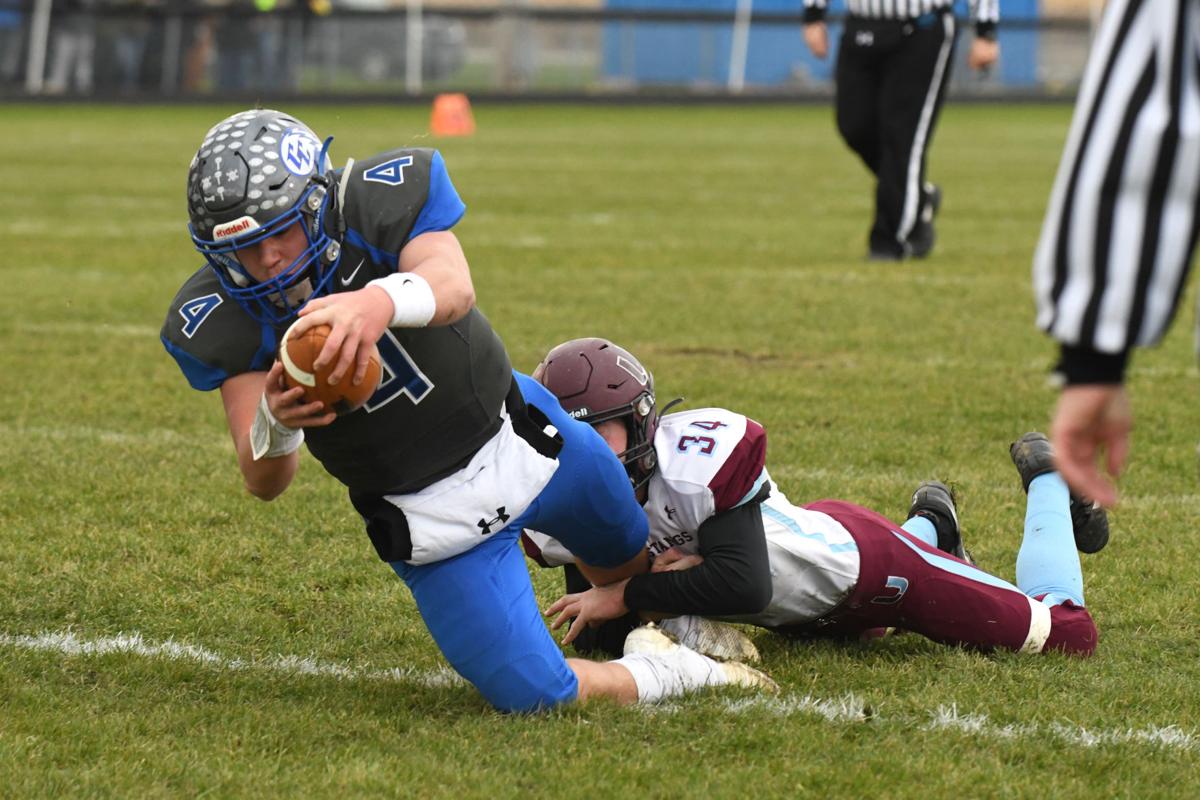 Central quarterback Jay Lemenager stretches for a first-quarter touchdown Saturday during the Comets’ 62-28 victory over Mendon Unity in Class 2A playoff competition. 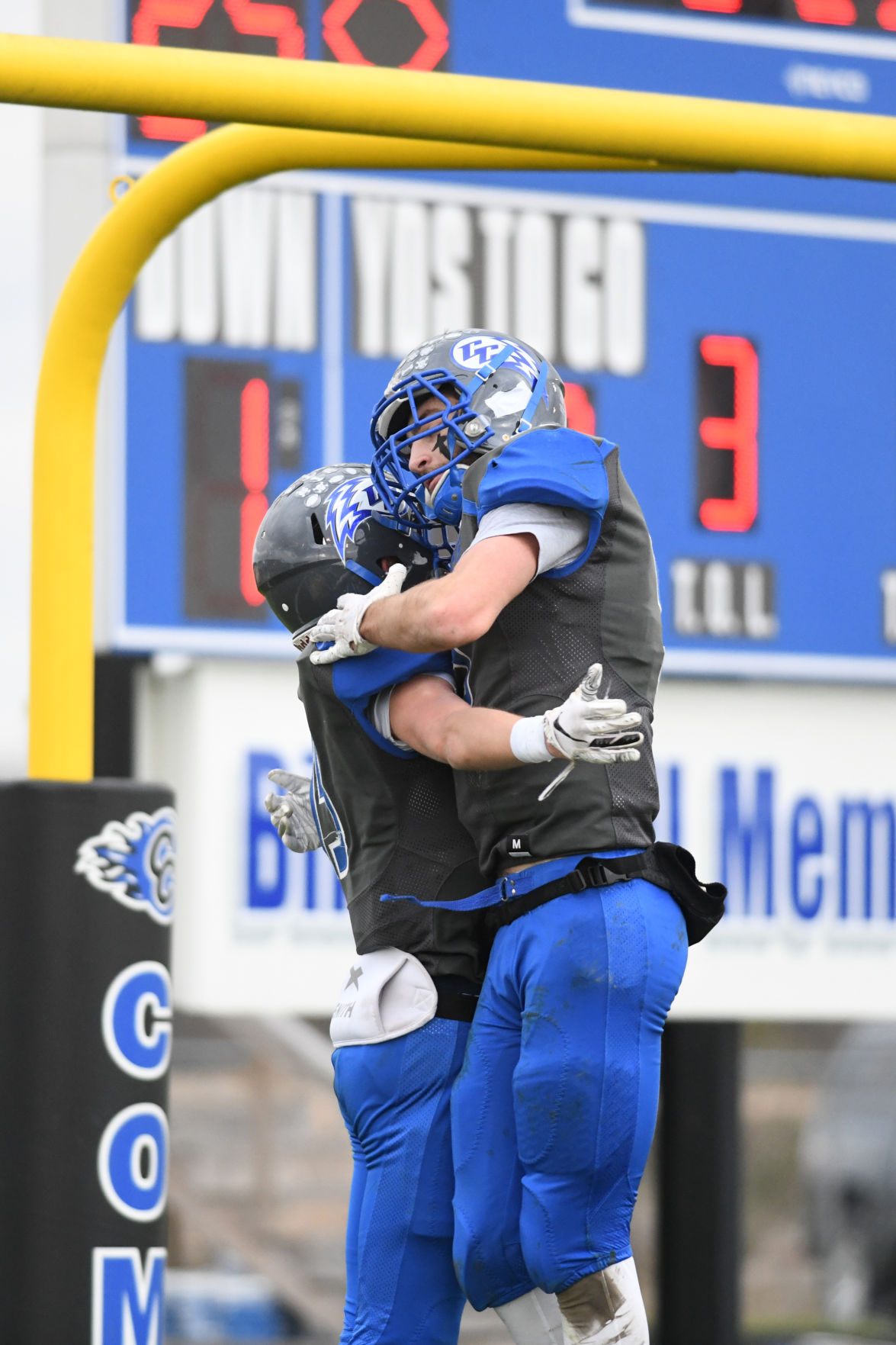 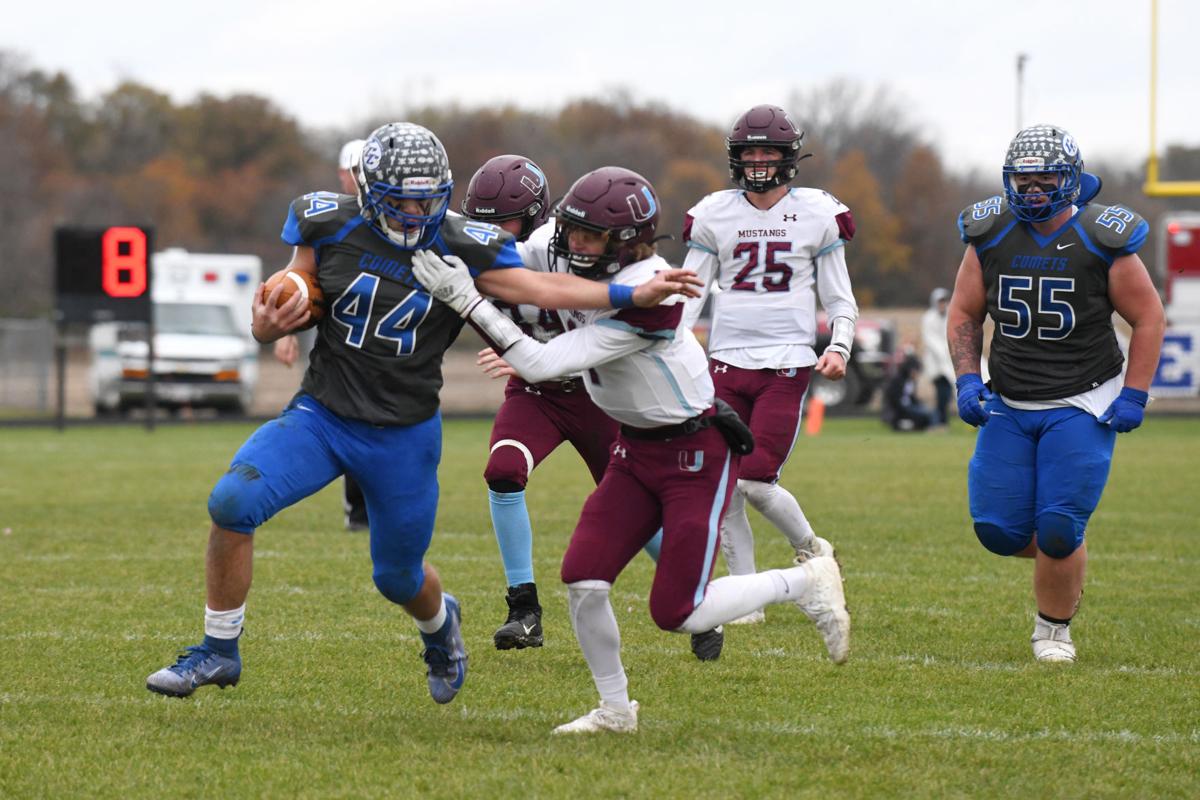 Central’s Garrett Graham fends off a Mendon Unity defender Saturday during the Comets’ 62-28 victory in Class 2A playoff competition.

Central quarterback Jay Lemenager stretches for a first-quarter touchdown Saturday during the Comets’ 62-28 victory over Mendon Unity in Class 2A playoff competition.

Central’s Garrett Graham fends off a Mendon Unity defender Saturday during the Comets’ 62-28 victory in Class 2A playoff competition.

CLIFTON —The Central Comets began their postseason football campaign on Saturday in exactly the same way they conducted their regular season — with a show of overwhelming force.

Led by a downright spectacular performance from junior quarterback Jay Lemenager, Central ran roughshod over the visiting Mendon Unity Mustangs in the opening round of the IHSA Class 2A Playoffs to the tune of a 62-28 blowout win in Clifton.

Between his rushing and passing totals, Lemenager out-gained the opposing team by himself. While the Mustangs managed 341 total yards, Lemenager passed for 244 yards and rushed for another 186 to bring his grand total on the afternoon to 430 yards. On top of those eye-popping totals, he also accounted for six of the Comets’ nine touchdowns, rushing for five and hooking up with Jacob Shoven through the air for a sixth.

“Everything was working for us offensively and defensively. We had a couple of slip-ups, but it was just a great overall game for everyone,” Lemenager said. “Our goal was basically just to put up as many points as possible, get the defense off and the offense back on the field, keep pounding and put up some points.

“It gives us plenty of confidence, but we still have to keep getting better for next week,” he added. “It’s only going to keep getting tougher as the weeks go on. We’re just going to watch some film and clean some things up. There are plenty of things to get better at if we’re going to get where we need to go.”

The junior was 12-for-21 through the air for 244 yards and amassed his 186 yards on the ground via just 13 carries to average a whopping 14.3 yards per carry from under center.

Shoven hauled in seven passes for 181 yards receiving to go with his touchdown, while also accounting for two of Central’s four interceptions on the other side of the ball.

Overall, it was a signature win for the now 10-0 Comets that gives them a full head of steam heading into their round two matchup with Mercer County at home in Clifton on Saturday at 3 p.m.

“Our kids played extremely well today on both sides of the ball and on special teams. It seemed like pretty much everything was clicking in our favor pretty much from the beginning,” Central head coach Brian Spooner said. “I hope it instills the right type of confidence that we can go out there and get things done. The weather is not exactly perfect for a team that likes to throw the ball, but we don’t want to use that as an excuse and I have to give the kids credit, the temperature didn’t seem to bother any of them at all.

“I don’t want to compare this team to other ones that we’ve had, but some of the really special ones we’ve seen have played in this manner at this time of the year. I think we’re getting to where we need to be in terms of offense and defense,” he added. “Hopefully this is a special season for us just like those were. We’re just going to continue to work hard and grind away.”