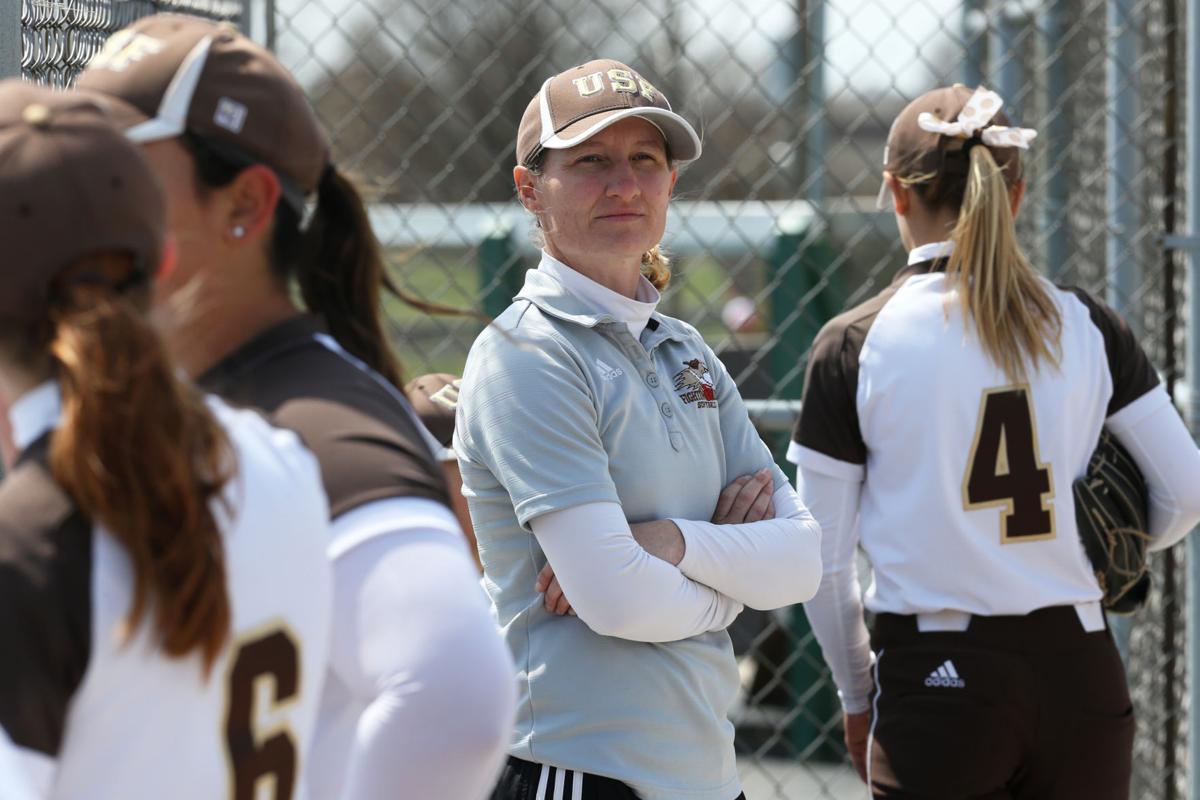 St. Francis softball coach Amanda Jensen looks on as her team enters the dugout. Jensen, a 1999 graduate of Bradley-Bourbonnais Community High School and 2003 graduate of Olivet Nazarene University, has been the head coach of the Saints for seven years. She’s compiled a 194-95 record during her tenure. 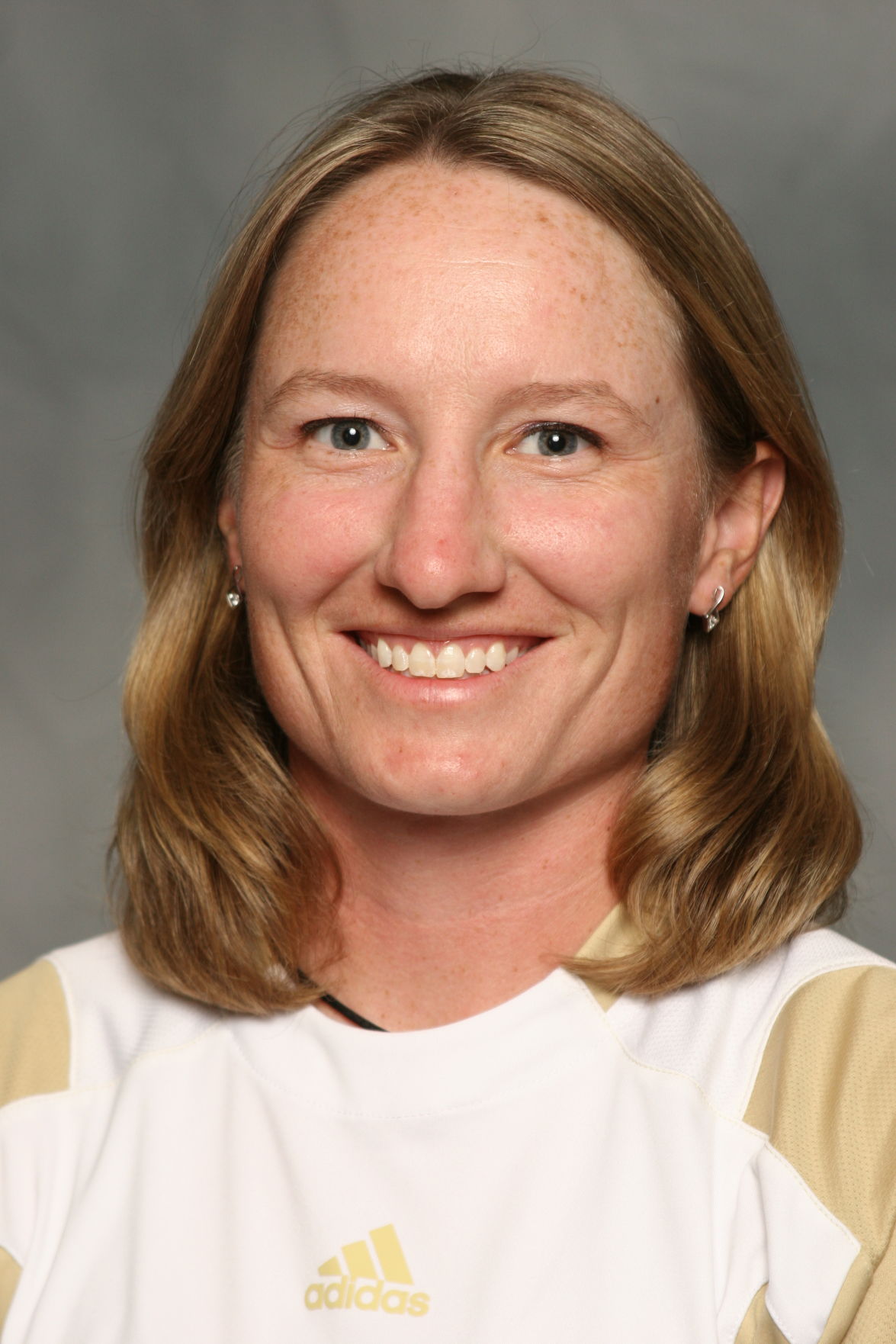 St. Francis softball coach Amanda Jensen looks on as her team enters the dugout. Jensen, a 1999 graduate of Bradley-Bourbonnais Community High School and 2003 graduate of Olivet Nazarene University, has been the head coach of the Saints for seven years. She’s compiled a 194-95 record during her tenure.

Whether it was playing high school, college or professional softball, Amanda Jensen and winning have gone hand and hand.

Softball has been in her blood since she can remember, dating back to watching her father, Dennis, play fastpitch when she became the unofficial home run ball chaser.

Those small moments of watching her dad play and hit groundballs to her after games fueled what turned into a fiery passion for the sport that became her life.

“I wanted to be just like him, and because he was on a team, I desperately wanted to be on a team, too” Jensen said. “Going to those games and playing catch on the field made me feel like I was a part of it. And I guess that continual feeling of excitement and enjoyment that we both share for this sport has never left me.”

She enjoyed a stellar four-year career at Bradley-Bourbonnais, where she helped the Boilers tally a 98-36 record, including a regional title in her senior year. That earned her a scholarship to Olivet Nazarene University.

For as good as she was in high school, she owned the college level.

She started and played every single inning from her shortstop position during her four years, she helped lead the Tigers to a combined record of 187-69 with three CCAC Tournament titles.

Additionally, she capped her career in 2003 as the MVP of ONU’s 61-13 NAIA World Series third-place finishing team.

“Anyone that knows me knows that I work very hard and that I love being a part of a team,” Jensen said. “Hard work and persistence were two values that were consistently modeled to my brothers and me by Dad and [my] mom, Linda. They unselfishly sacrificed throughout their lives so that my brothers and I could be challenged to see that hard work isn’t showcased for personal advancement but rather its true purpose is to be given so that others can benefit from your efforts.”

She also sported a modest .368 batting average and an on-base percentage of .443 while being named NCCAA National Player of the Year as well as NAIA and National Fastpitch Coaches Association (NFCA) First-Team All-American in 2003 after leading the NAIA in hits (99), runs (87) and assists (215), while committing just six errors.

It goes without saying, but she was phenomenal, which led to her being the first softball player inducted into the Olivet Nazarene Athletic Hall of Fame in 2008.

“My motivation to work hard came with the true intention of trying to benefit my teammates. The individual awards that came after it were a pleasant surprise, but they weren’t anything I was setting out to achieve,” Jensen said. “I remember the day when I got a call and was told that I was selected to be inducted into the ONU Athletic Hall of Fame. I remember feeling a deep sense of pride because the university that I cared so deeply about was inviting me to belong to something that was special.

“While receiving any award or recognition is a tremendous honor for any recipient, I honestly believe the absolute highest accolade any athlete can obtain is being respected and remembered by his/her peers as being a good teammate.”

Her playing days weren’t finished just yet. She played two seasons with the nation’s premier amateur team, the Stratford Brakettes, and helped the Brakettes to a 50-4 record and the 2004 ASA Women’s Major National Championship.

While she still was racking up the hits, she also was craving a new path once her playing days were finished as an assistant coach at Olivet.

“It wasn’t until college that I began thinking about the possibility of coaching it one day,” Jensen said. “After graduation, the itch for coaching was becoming much greater, so I applied for and was offered the opportunity to become a two-year graduate assistant coach at Olivet. After completing two masters degrees, I still felt like there was more for me to learn before jumping into the head coaching role, so I stayed on as an assistant coach for four more additional years and continued to prepare.”

In fall 2011, the position for associate head softball coach became available at the University of St. Francis. Jensen applied and was offered the job.

After one year as assistant, she was named as the seventh head coach in St. Francis history.

“I did not have any apprehensions about making that transition,” Jensen said. “I felt that I was patient with my preparation and that I built a solid foundation of knowledge over the previous eight years by learning the profession through the experiences that Olivet and Coach Ritchie Richardson had provided to me as an assistant coach.”

True to her days as a player, all Jensen has done as a coach is win and help set more records.

During her seven-year tenure as coach, she’s complied a 194-95 record that includes back-to-back 40-win seasons along with back-to-back CCAC conference titles and NAIA National Tournament appearances.

She also was named CCAC Coach of the Year in 2017 after leading the Saints to 43 wins and a school-record .860 winning percentage.

Softball always has been kind to Jensen. The journey she is on only has reinforced her love for the sport and has given her a different perspective on how she can use her position to affect others.

“The past several years have [gone] by extremely fast, it’s hard to believe that I have been in this position for that long,” Jensen said. “You have to tip your hat to all the players. They are the ones that compete on the field each day and make the plays to win the games. My focus has never been specifically on the end result; it’s always been about the young women in our program maturing into accountable adults and to witness these athletes learn how to make correct decisions and discover the true meaning of the word ‘team.’”

And while it’s unknown what the future holds for her and the University of St. Francis, one thing is for certain: They will continue to win.

Even more importantly for Jensen, she will continue to take the athletes on her team and push them, and herself, to be better.

“My goal is to stay consistent with the vision that I have for this program,” Jensen said. “I want to provide to every one of the student-athletes in our program the greatest opportunity of success athletically on the field as a teammate, academically in a future career as a colleague and personally by developing accountable leadership skills that can thus provide a ripple effect of positive influence on others.”