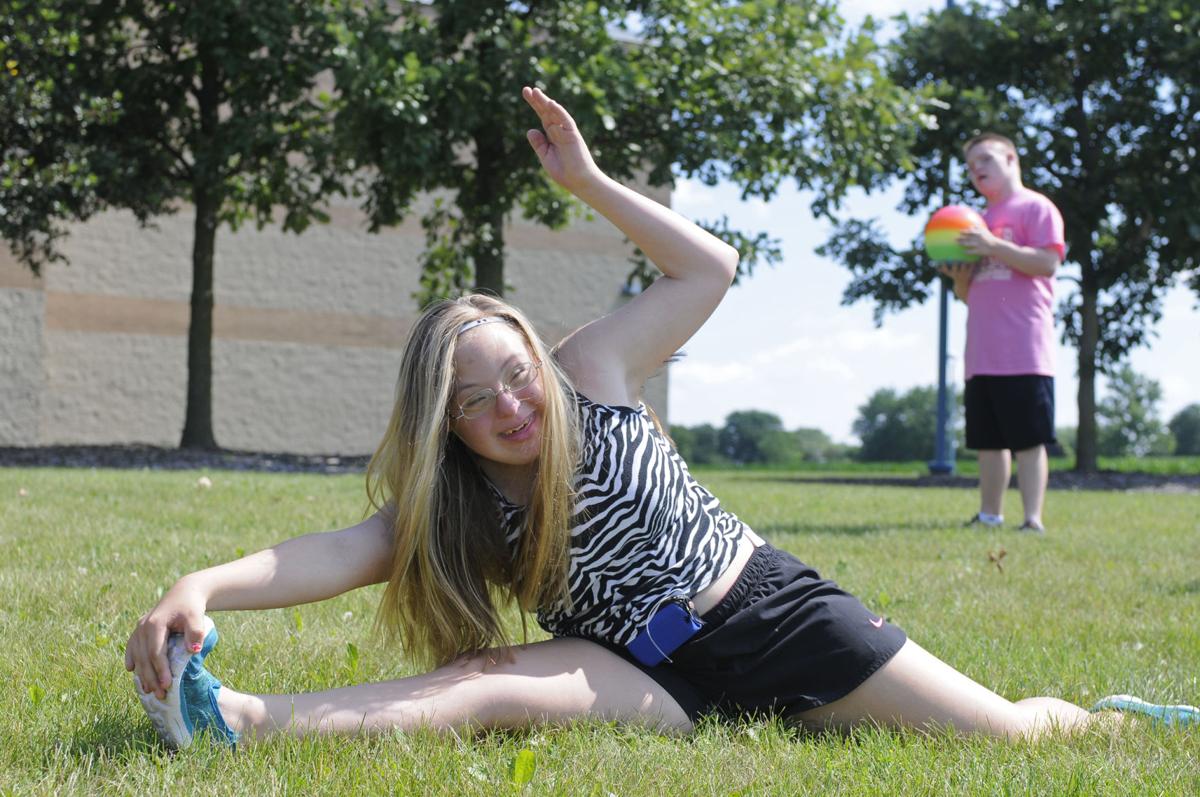 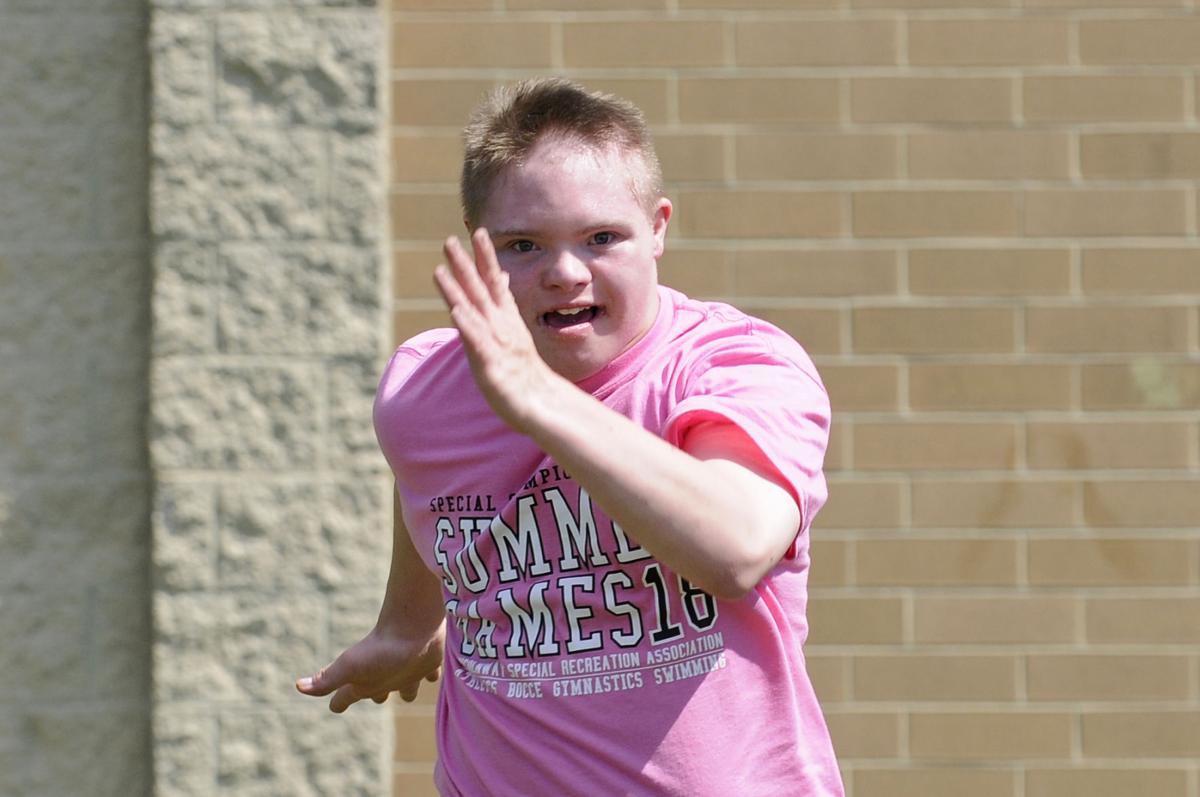 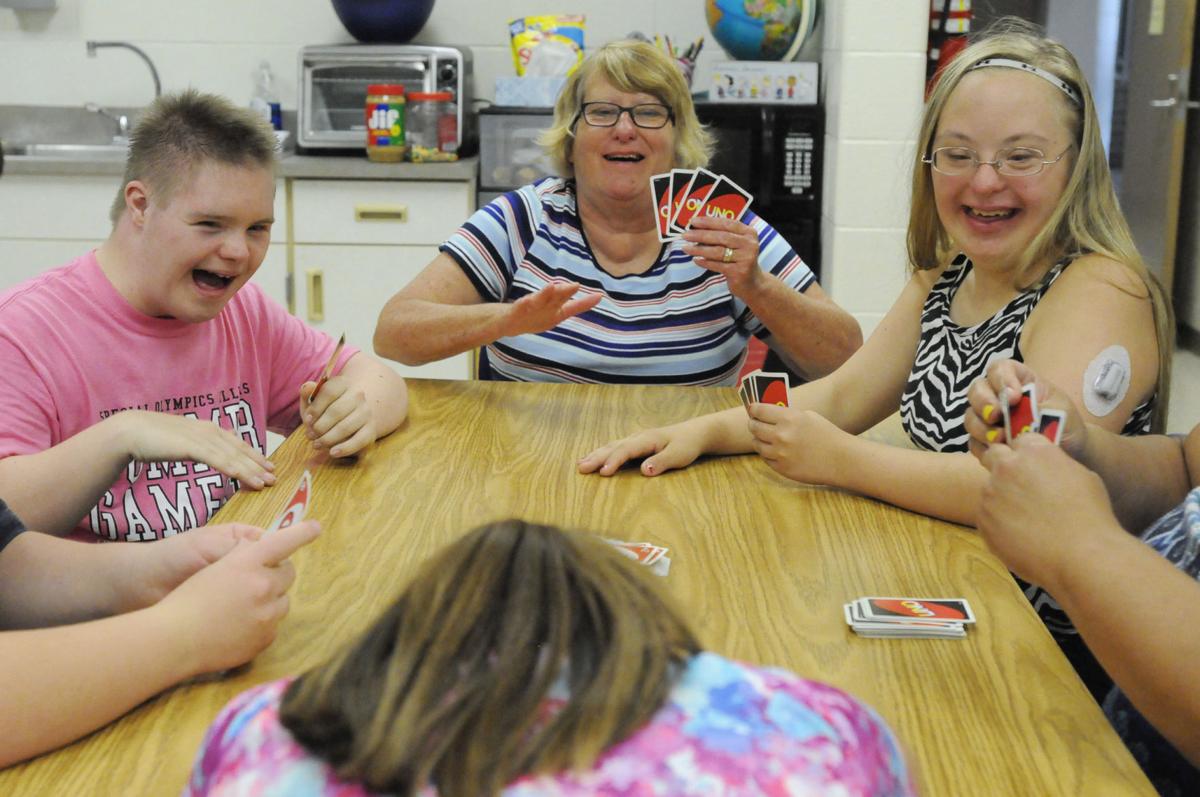 Peotone High School students Micheal Flanagan, left, and Bethany Gass, right, get competitive with classmates and teacher’s aide Dawn Schuzer, center, in a heated game of Uno on Thursday during the last day of summer school. Flanagan and Gass competed in the Special Olympics Illinois Summer Games on June 14, both winning first place medals in the 1500-meter run and gymnastics balance beam, respectively. 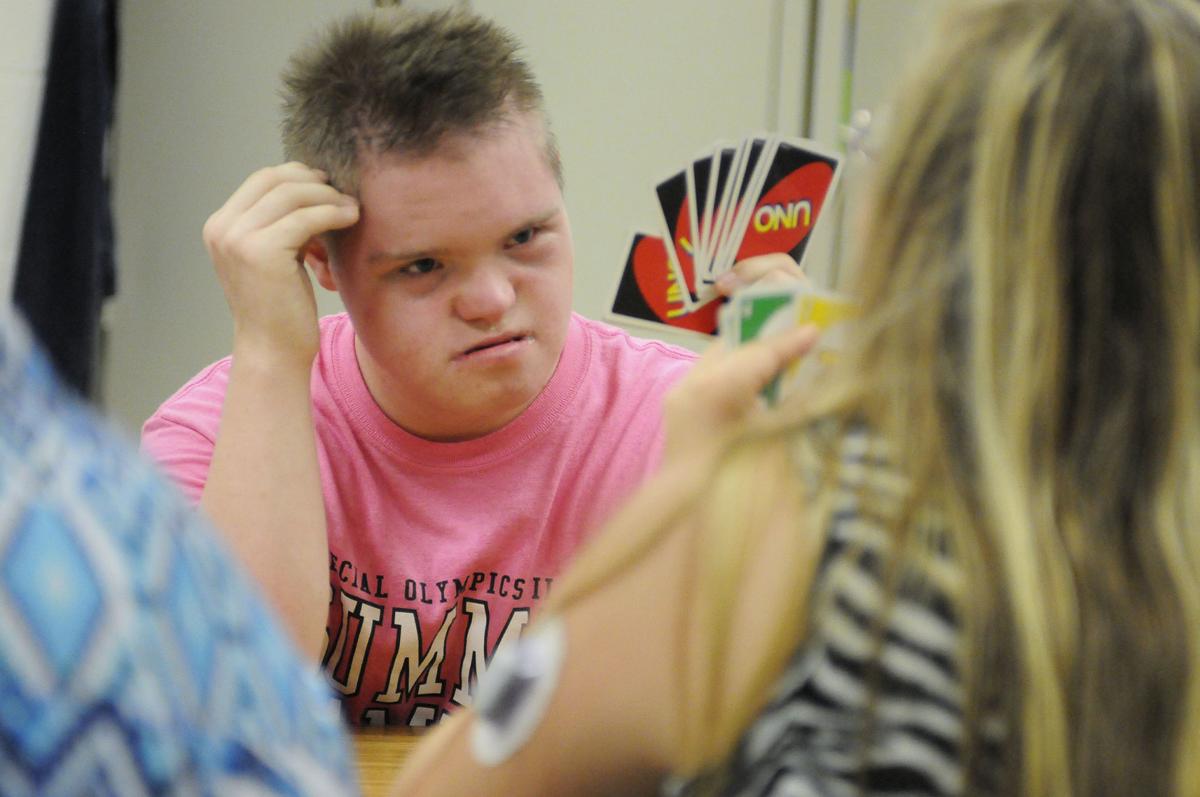 Peotone High School student Micheal Flanagan awaits classmate Bethany Gass' next move in a heated game of Uno on Thursday during the last day of summer school. Flanagan and Gass competed in the Special Olympics Illinois Summer Games on June 14, both winning first place medals in the 1500-meter run and gymnastics balance beam, respectively. "They're very competitive with each other, 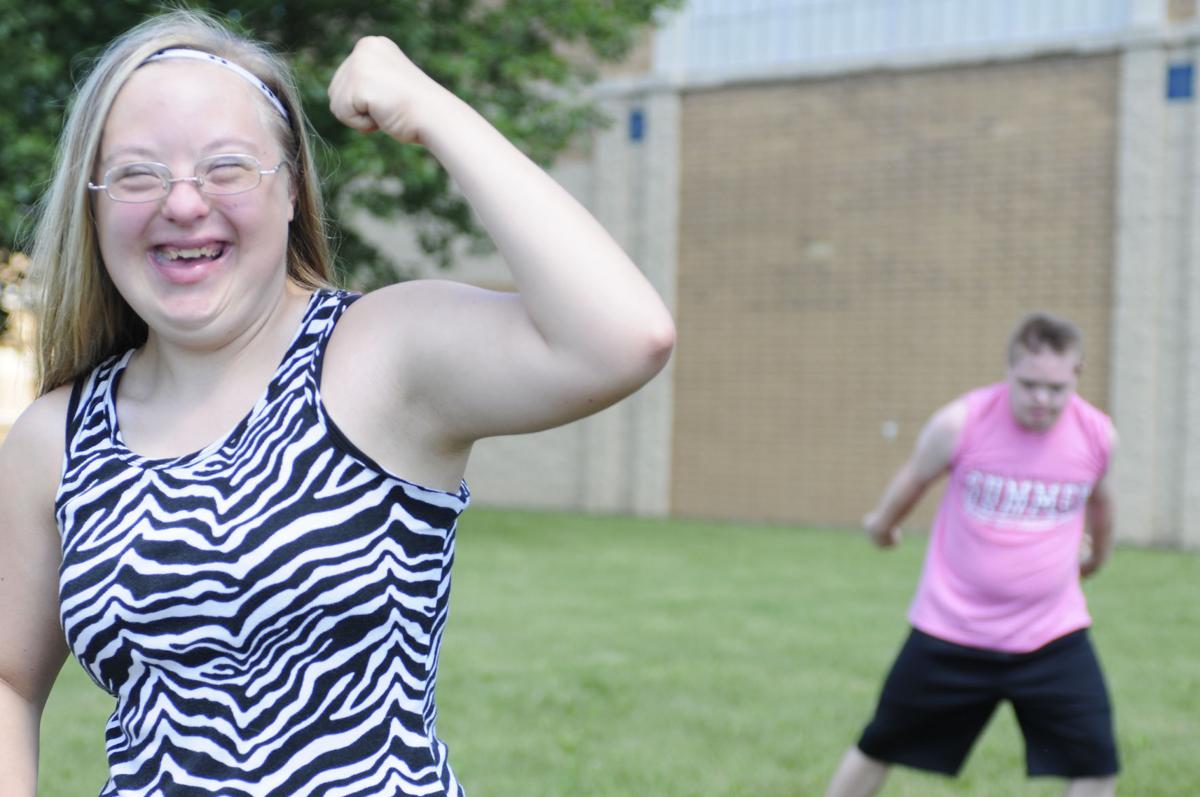 Peotone High School students Micheal Flanagan, left, and Bethany Gass, right, get competitive with classmates and teacher’s aide Dawn Schuzer, center, in a heated game of Uno on Thursday during the last day of summer school. Flanagan and Gass competed in the Special Olympics Illinois Summer Games on June 14, both winning first place medals in the 1500-meter run and gymnastics balance beam, respectively.

Peotone High School student Micheal Flanagan awaits classmate Bethany Gass' next move in a heated game of Uno on Thursday during the last day of summer school. Flanagan and Gass competed in the Special Olympics Illinois Summer Games on June 14, both winning first place medals in the 1500-meter run and gymnastics balance beam, respectively. "They're very competitive with each other,

PEOTONE — The trophy case at Peotone High School is full of honors earned by dozens of student-athletes and teams through the years. But this summer, a special pair of students will join those decorated ranks.

Micheal Flanagan, 16, and Bethany Gass, 14, both competed in the Special Olympics Summer Games in Bloomington earlier this month. Each of them took home a gold medal, as well as a handful of silver and bronze medals.

"You could definitely see the smile on their face(s)," Peotone special education teacher Stephanie Blamble said. "I let them come in (to summer school) about what they did, which the other kids get really excited about."

Micheal makes a run for it

Flanagan earned his gold medal in the 1500-meter run. He was also a part of the 4x100-meter relay team that finished fourth and individually finished fourth in the shot put, which his mother, Emer, coaches.

"My goal is don't think, just do, before you win," Micheal said. "My favorite (Special Olympics activity) is running."

Flanagan has participated in Special Olympics since he was eight years old, which is when children are allowed to begin competing. But according to Emer, the Flanagan family's connection with Special Olympics started long before.

Emer was born in Ireland and while his family was there in 2003, they attended the first-ever Special Olympics World Games held outside of the United States when they were held in Limerick, Ireland that year.

"We went to see those when (Micheal) was little and we were like, 'Oh my gosh, we can't wait until he's older," Emer said. "My husband (Mike) and I both competed in sports when we were younger, so it was kind of a natural progression."

Micheal's gold this summer was his second in a row in the event and fourth overall. Aside from the track, he has also taken home the gold in golf and as a part of Lincoln-Way Special Recreation's basketball team, which is where he competes in track and field as well.

"He's always watching sports, whether it's soccer, rugby, gold, it doesn't matter," Emer said. "He finds whatever channel a sport is on."

But it's hockey that is Micheal's passion. Aside from watching his beloved Chicago Blackhawks (his favorite player is Patrick Kane), Micheal plays for the Blackhawks as well, as a part of the organization's Special Hockey program.

"I am a really big hockey fan ... I've played since I was five," Micheal said. "I like it much better than running."

"We hear about (hockey) all the time," Blamble said. "He gets to sit with the players and go to the locker room to talk to the players, so he's pretty popular in that regard."

Micheal was born with Down syndrome, a genetic chromosome disorder. He has a twin sister, Deirdre, who was born without the disability and is a member of the golf team at St. Ignatius in Chicago.

According to Emer, one of the best attributes of Special Olympics is that it provides Micheal similar opportunities as his sister.

"It's pretty incredible from a parent's perspective, because when your child performs with a disability, you tend to regret the things that won't happen," Emer said. "But then you come to something like this and it's so much more.

"(Micheal) is a twin, but his sister doesn't get the rewards he gets through Special Olympics, so it's about more than competing."

While Micheal is a Special Olympics veteran, the same cannot be said for Bethany, who participated in her first Summer Games. Her first place medal came in the balance beam, but Bethany also competed in the vault, uneven bars, floor exercise and all-around exercise.

"My favorite part is the beam, but I (like) the floor exercise," Bethany said. "I do cartwheels and handstands."

Like Micheal, Bethany was born with Down syndrome. In addition, Bethany has diabetes, which made finding activities that she could compete in more difficult, according to her mother, Melody.

"Gymnastics was something she could do individually and with her diabetes," Melody said. "We as parents were always concerned with if we let other kids down, so (gymnastics) was an individual sport that had just gotten started in Tinley Park."

Bethany is on the school's dance team, which is coached by Blamble. She had previously played in the band and served as manager of the basketball team, but last school year, decided to change it up.

"I like to dance, because I'm a great, great dancer," Bethany said. "It helps me not fall (off the balance beam)."

When Bethany isn't dancing or in the gym, she can be found in the theater. Last year, she was part of Peotone's productions of Aladdin Jr., The Sound of Music and Annie.

Blamble said the school has rallied behind the two medalists this summer.

While the school's social media accounts post their pictures and stories, the students made sure to do their part before they departed for Bloomington.

"Our kids here are very supportive and it's awesome," Blamble said. "Our dance girls had a going away party before (Bethany) went to state and our Best Buddies program does a great job of cheering them on."

According to Blamble, the school has also recently started planning to bring a Special Olympics program to the district, which is something she is fully on board with.

"We have a lot more students who don't have the opportunity to participate in these sports," Blamble said. "I think if we bring (Special Olympics) into Peotone, we can have a lot more champions."

Volunteers make the Games go around

Whether it was the Gass family making their first trip to the Summer Games, or the Flanagan family having it a regular part of their summer, both families were in awe of all the volunteer hours put in to ensure the event was a success.

"It's really amazing how many people do give themselves and volunteer. I never realized the thousands of people that volunteer," Melody said. "There are just a lot of really giving, wonderful people in the world who don't get recognized and we're grateful for that."

The Special Olympics are celebrating their 50th anniversary this summer, complete with a week of celebration that begins July 16 and culminates with a concert on July 21 at the Huntington Bank Pavilion at Northerly Island in Chicago.

The concert will feature headliners such as Chance The Rapper, Smokey Robinson and Usher, among others.

"It's going to be a busy summer celebrating 50 years of Special Olympics," Emer said. "It's one of those things that's very easy to get caught up in the excitement, and it's all about the kids, which is the most important thing."