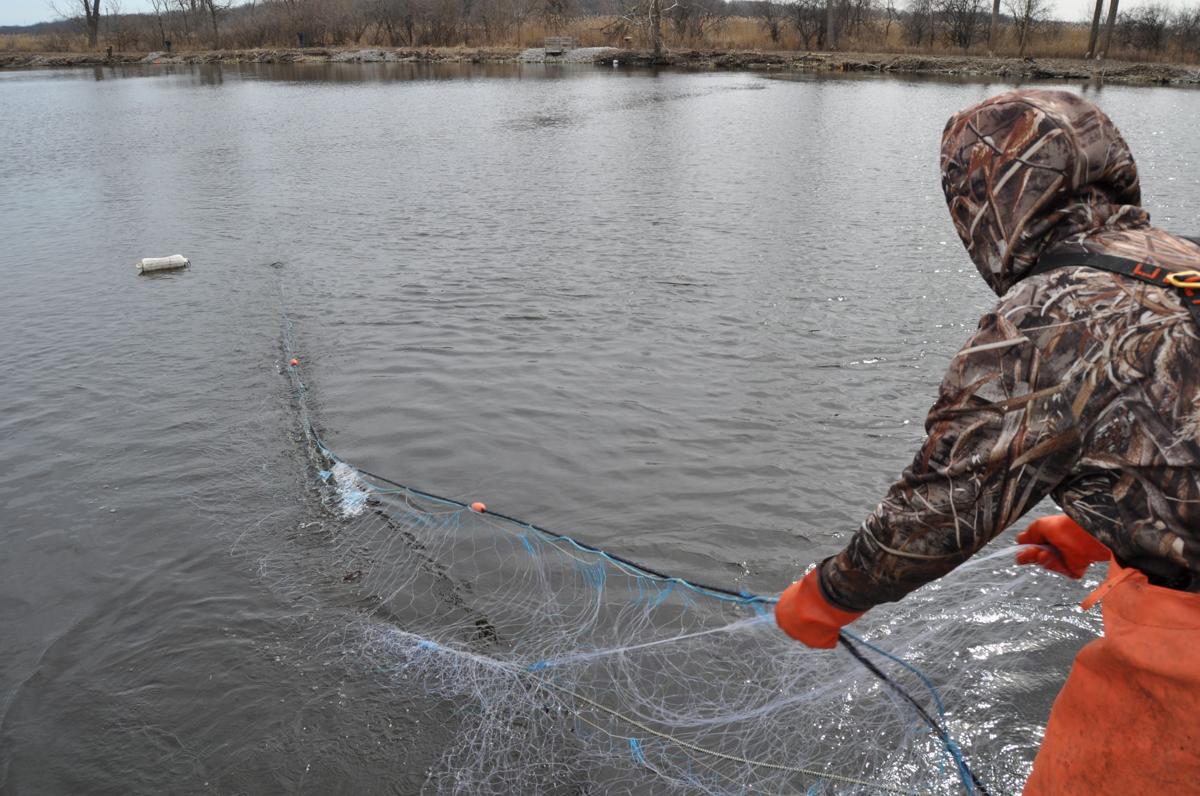 A commercial fisherman hauls in a net to catch invasive Asian carp at the Forest Preserve District of Will County’s Rock Run Rookery off the Des Plaines River at Joliet. 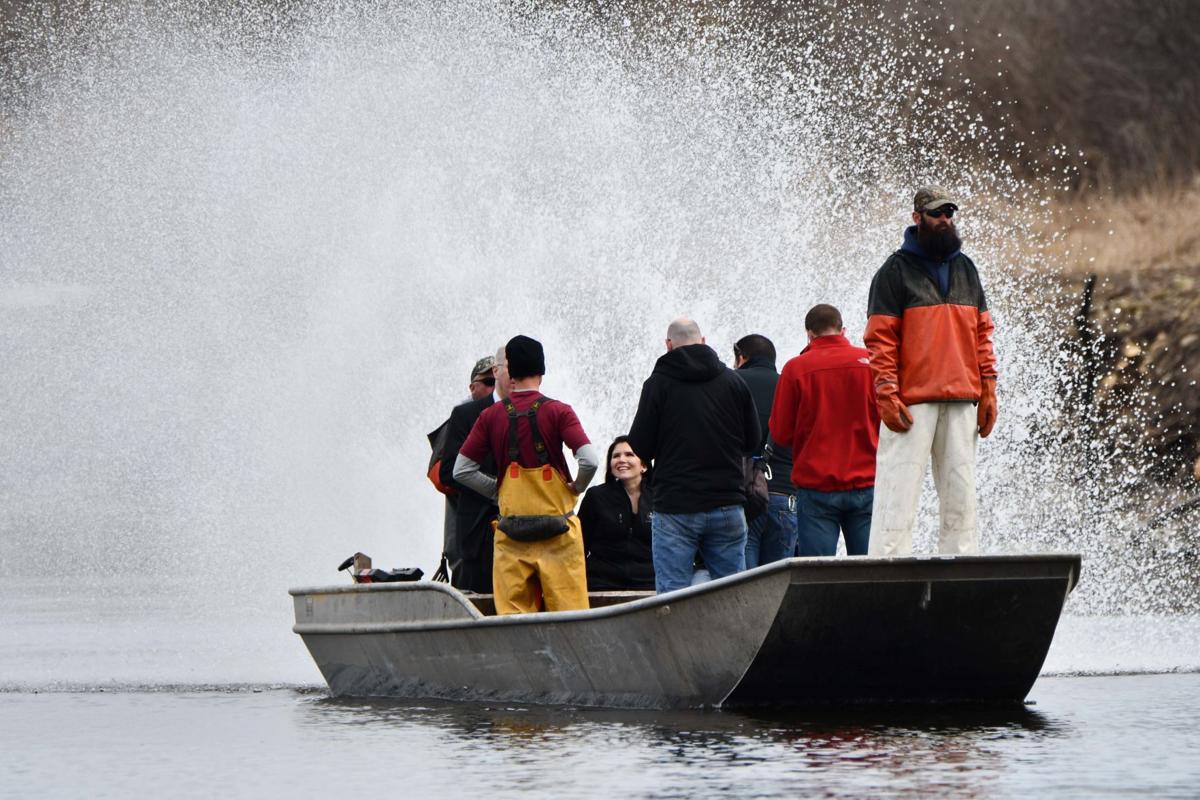 Lt. Gov. Evelyn Sanguinetti, facing camera, and others, including U.S. Reps. Adam Kinzinger and Bill Foster, ride a boat toward spray created to scare Asian carp into nets on the Rock Run Rookery Lake off the Des Plaines River on the south side of Joliet on Monday.

A commercial fisherman hauls in a net to catch invasive Asian carp at the Forest Preserve District of Will County’s Rock Run Rookery off the Des Plaines River at Joliet.

Lt. Gov. Evelyn Sanguinetti, facing camera, and others, including U.S. Reps. Adam Kinzinger and Bill Foster, ride a boat toward spray created to scare Asian carp into nets on the Rock Run Rookery Lake off the Des Plaines River on the south side of Joliet on Monday.

An Asian carp fishing demonstration held Monday at Rock Run Rookery Preserve in Joliet highlighted state and federal efforts to keep the invasive species from getting farther upstream in the Illinois River waterway and into the Great Lakes.

Lt. Gov. Evelyn Sanguinetti and U.S. Reps. Adam Kinzinger and Bill Foster took part in the demonstration, along with representatives of the Illinois Department of Natural Resources and the Forest Preserve District.

Officials watched as commercial fishermen used nets to attempt to catch Asian carp in the lake. One 5-pound silver carp was snared during the demonstration; samples of prepared Asian carp were served on crackers to show how they can be used as a food source.

Rock Run Rookery, which is connected by a channel to a section of the Illinois River called the Dresden Pool, is the northernmost point where the fish have been found, according to Kevin Irons, the state’s Aquaculture and Aquatic Nuisance Species Program manager.

“We’re at the leading edge,” he said as he stood on a viewing platform at the lake. “We do not find this fish upstream of here.”

IDNR has hired commercial fishermen to catch Asian carp from Starved Rock north to Rock Run Rookery and the Dresden Pool, which stretches from the Dresden Lock to the Brandon Road Lock and includes a portion of the Kankakee River.

“We’re out here every other week, and that kind of effort is what has led to a 93 percent reduction in their abundance in this pool in the river,” Irons said of the Asian carp. “So our job is to keep them from advancing. And actually, I think we’re turning the dial back, reducing the number of fish here and their opportunity to move upstream.”

Asian carp are a menace because all they eat is plankton, which young native fish need to survive and which some adult native fish, including bigmouth buffalo and gizzard shad, also eat, Irons explained.

In addition, Asian carp lay millions of eggs, so they can reproduce quickly, further straining resources for native fish, he said.

Asian carp escaped into U.S. waterways from catfish farms in the South during flooding. The foreign carp were brought to this country in the 1970s as a biological control method for algae blooms at the fish farms.

Since 2010, IDNR has been using science, including electric barriers and fencing in Romeoville, to fight the spread of the fish upstream. First, IDNR looked for the fish in Chicago, but found none, Irons said. So the state turned its attention downstream and “took the fight to the fish” by hiring commercial fishermen to harvest fish from late February through mid-December on the Illinois River upstream from Starved Rock, he added.

Commercial fishermen have removed 6.3 million pounds of Asian carp so far in the section of river upstream from Starved Rock. Harvested fish are being used mostly for fertilizer and dog treats and as bait for fishermen in the South.

“This is absolutely amazing work on the part of our scientists, as well as the Department of Natural Resources,” Sanguinetti said.

No one agency can fight the fish alone. Loren Wobig, director of IDNR’s Water Resources Office, said Illinois is working with other Great Lakes states and Canadian provinces to deal with invasive species, including Asian carp. And Irons said IDNR is working with federal partners, including the Army Corps of Engineers, the Environmental Protection Agency and the Fish and Wildlife Service.

The Great Lakes are not the only geographic region in jeopardy. Irons said four Asian carp species — bighead, silver, grass and black — have been found from the Adirondack Mountains to the Rocky Mountains and from Minnesota waters all the way to New Orleans.

One strategy being used to remove the fish is to allow commercial fishing on rivers south of Starved Rock and beyond. And much of this harvest is being used as a food source.

“These are some of the best-tasting fish in the world,” Irons said.

Samples of Asian carp salad were served to the group at Rock Run Rookery alongside tuna fish salad to show what a mild-tasting fish Asian carp is.

“If you can’t beat ’em, eat ’em,” Sanguinetti joked. “They also taste delicious. … I’ve had some myself and I’m going to have some more.”

She added that the University of Illinois serves 1,400 portions of Asian carp per week to its students.

Kinzinger and Foster pledged their support to the effort and promised to help get the federal resources needed to continue this work.

While the battle against the fish seems to be going well, and more people are eating them, Foster warned against complacency.

“I just want to emphasize that the stakes are really high here,” he said. “A single breeding pair getting into the Great Lakes can cause incredible damage to the multibillion-dollar fishing industry and to the tourism industry and just the quality of life for everyone who uses the Great Lakes. And so it’s really important that we get this right.”

Tim Yonke is the Assistant Managing Editor/Weekend Editor at the Daily Journal. He can be reached by calling 815-937-3372 or by email at tyonke@daily-journal.com.