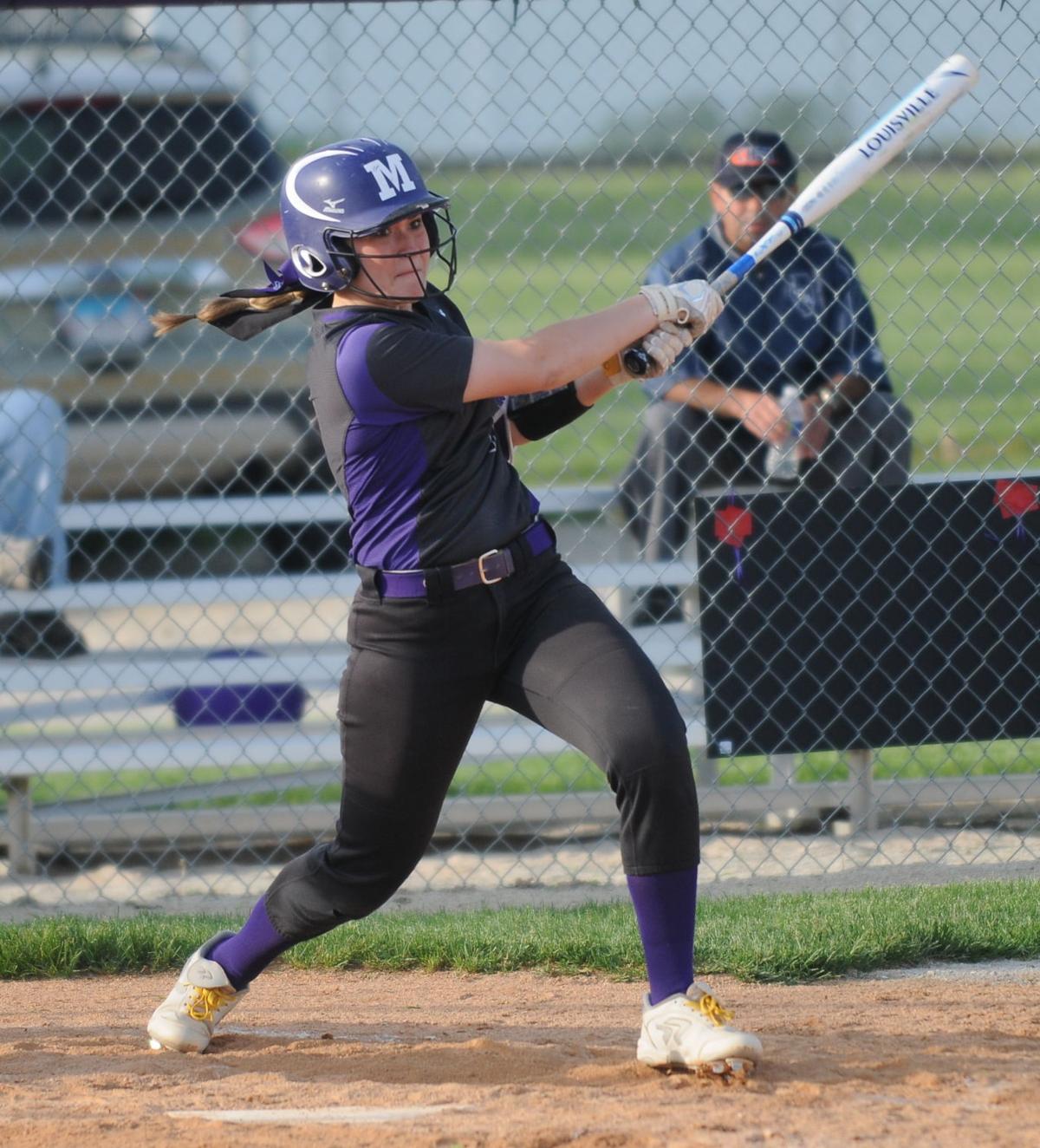 Manteno's Lexi Bowdish triples into right field during an 8-3 win against Plano in Interstate Eight Conference action. Bowdish, alongside three of her teammates, earned first-team I-8 honors as South division champions. 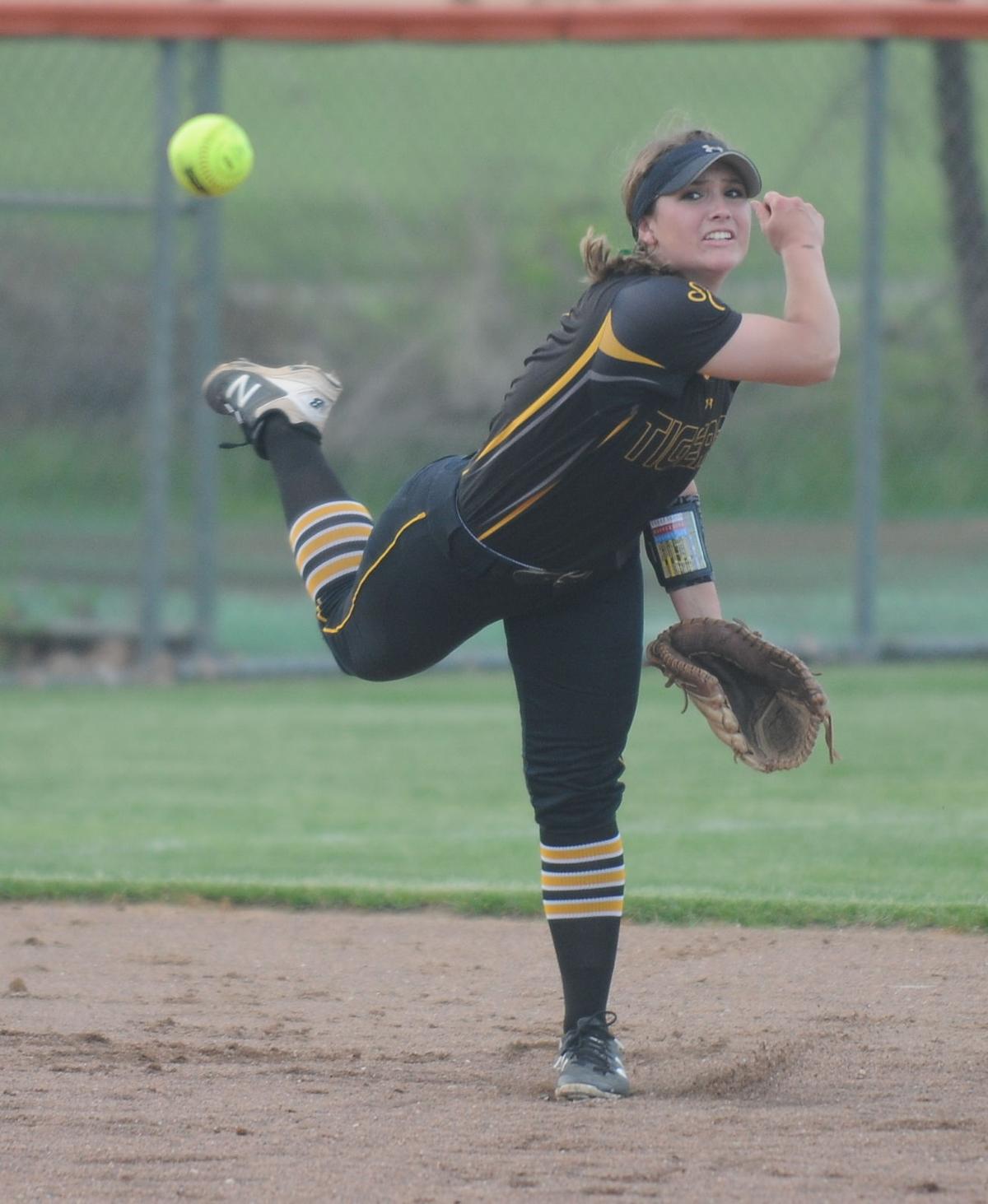 Herscher’s Gabby Schultz throws a runner out from her shortstop position during a loss to Beecher. Schultz's .559 batting average earned her and three other Tigers first-team I-8 honors. 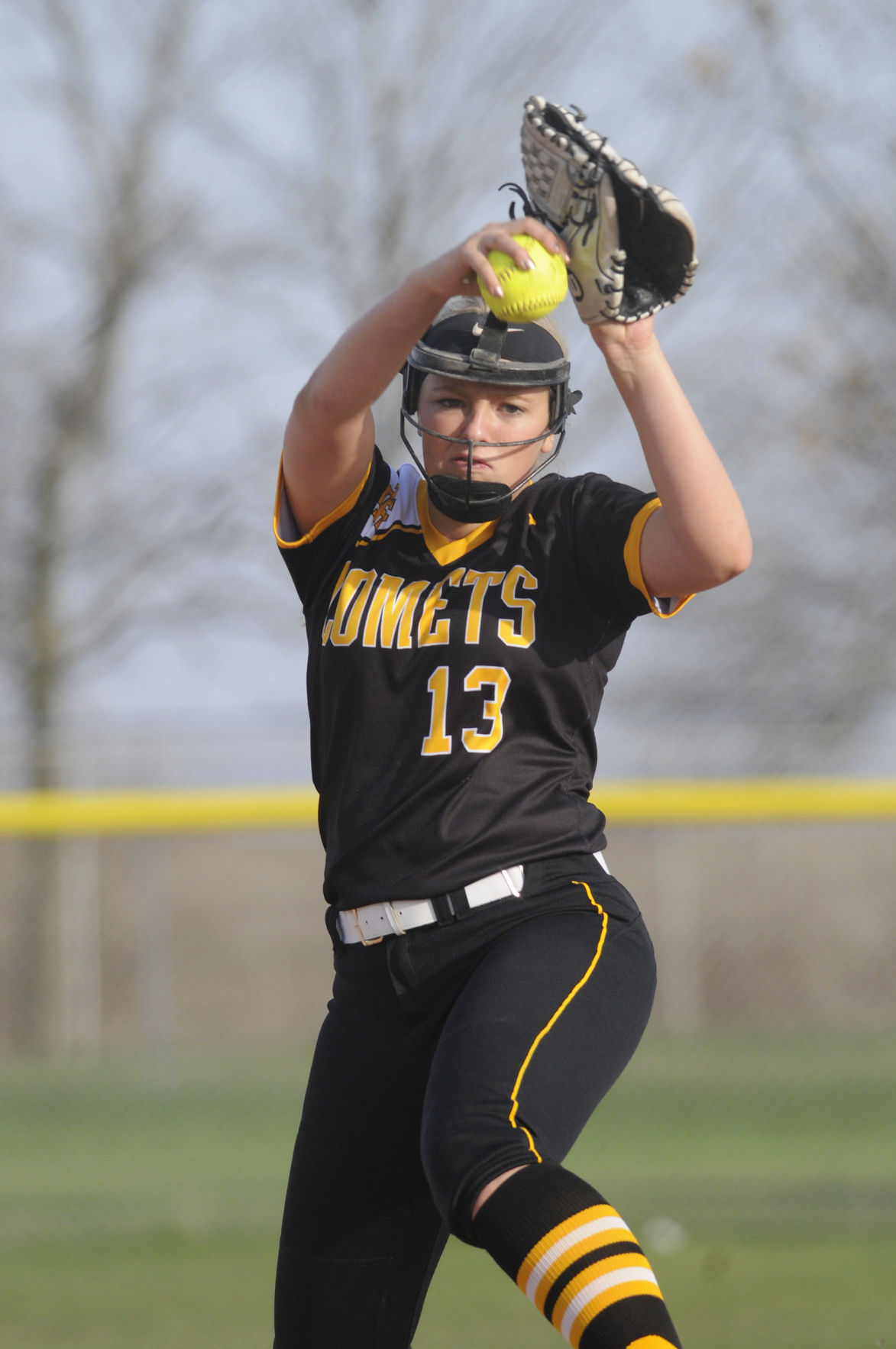 Reed-Custer pitcher Antoinette Hill winds up during Reed-Custer's 13-5 victory against Central earlier this season. Hill's arm and bat earned her first-team I-8 honors with two of her teammates.

Manteno's Lexi Bowdish triples into right field during an 8-3 win against Plano in Interstate Eight Conference action. Bowdish, alongside three of her teammates, earned first-team I-8 honors as South division champions.

Herscher’s Gabby Schultz throws a runner out from her shortstop position during a loss to Beecher. Schultz's .559 batting average earned her and three other Tigers first-team I-8 honors.

Reed-Custer pitcher Antoinette Hill winds up during Reed-Custer's 13-5 victory against Central earlier this season. Hill's arm and bat earned her first-team I-8 honors with two of her teammates.

The Interstate Eight Conference never disappoints with its softball scene, and this season was no different with five of the 12 teams winning at least 10 games inside conference play.

With the season officially in the books, the I-8 released its all-conference teams for both the North and South divisions.

Wenzel, Manteno's leadoff hitter, did her job quite possibly better than anyone in the area as she topped the season with a .575 average, including 11 doubles, three triples, one long ball, 56 runs and 16 RBIs.

Malone was a combination of power and speed according to head coach Josh Carlile, and the stats reflect that statement. She ended her season batting .519 with eight doubles, four triples, one homer, 49 runs scored and 44 RBIs.

Bowdish, the team's three-hole hitter, sometimes by herself was too much for teams to handle as she finished her junior year batting .515 with three homers, 20 doubles, three triples, 41 runs and 53 RBIs.

Fricke benefited quite nicely from having those three names bat in front of her since they were normally on base. She finished the season with a .449 average and a team-high four long balls alongside 15 doubles, a pair of triples, 20 runs scored and 41 RBIs.

Just as good as her bat was, her arm was as spectacular as she earned 15 wins while sporting a 2.39 ERA and striking out 91 batters.

Herscher also had four players on the first-team list with Gabby Schultz, Chloe Jefferson, Paige Glass and Molly Cann getting the nod.

Glass handled leadoff duties and rewarded her team with a .364 average with a pair of long balls, 11 doubles, 30 runs scored and 20 RBIs.

Cann batted after Glass and very often came through as she ended her final season as a Tiger batting .523 with four homers, 12 doubles, 59 runs scored and 39 RBIs.

Schultz proved to be one of, if not the most feared hitter inside conference play. She finished her final season as a Tiger with a .559 batting average including 10 bombs, second-best in the area, alongside 17 doubles, three triples, 60 runs scored and 56 RBIs.

Jefferson was always hot on Schultz's trail, cleaning up any mess that Schultz created to the tune of a .442 batting average with eight long balls, 15 doubles, five triples, 37 runs scored and 49 RBIs.

After a 16-10 season, Reed-Custer sent three players to the first-team list in Antoinette Hill, Haley Mazon and Grace Colcalsure.

Hill took over for Kenna Wilkey in the circle and kept the Comets contending inside conference play as she tossed 160 1/3 innings to the tune of 128 strikeouts, including 19 against Peotone, while carrying a 1.92 ERA.

The junior also finished the season batting .342 at the dish with two long balls and 18 RBIs.

Mazon took advantage of hitting in the three-hole by batting .390 on the season with a team-high three long balls and 21 RBIs, second-best on the team in her final season as a Comet.

Colcalsure, only a sophomore, came up with a number of timely hits including an RBI single in a 1-0 victory over Kankakee. She finished her season with a .354 average with a team-high 22 RBIs.

Peotone earned itself two players on the first-team list in Josie Graffeo and Samantha Gwaizda.

Gwaizda, only a sophomore, established herself as a focal point of Blue Devil softball as she topped her second season with a .532 batting average that includes five long balls, 32 runs scored and 41 RBIs.

Graffeo did a little bit of everything for the Blue Devils from playing in the infield to pitching. She continued to progress and pushed Beecher to extra innings at the end of the season.

Representing Wilmington on first-team is Katie Kucharski. The sophomore third baseman finished the season with a .419 batting average including six doubles, three homers alongside 16 runs scored and 27 RBIs.

Rounding out the first-team for the South division is Streator's Aubrey Durdan.

Coal City, which finished second in the North division of the Interstate Eight with a 10-6 record inside conference play, had three players named to first-team in Madison Emerson, Paityn Smith and Leslie Youskevtch.

Smith turned her game on toward the latter part of the season and finished the year pitching 130 innings with just a 2.04 ERA while striking out 130 batters.

Youskevtch alternated between pitching and outfield duties, but her bat stayed consistent all season. The senior ended her season batting .354 with five doubles, a pair of long balls, 16 run scored and 15 RBIs.

Emerson showed to be one of the more threatening hitters in the North division. The sophomore slugger finished the year with a .337 batting average including 11 doubles, four homers, 24 runs and 26 RBIs.