Free access for current print subscribers
Get Started
You are the owner of this article.
Edit Article Add New Article
You have permission to edit this article.
Edit
Home
News
Sports
Opinion
Life
Obituaries
HomeFinder
Jobs & Classifieds
Lifestyles of Kankakee County
1 of 10 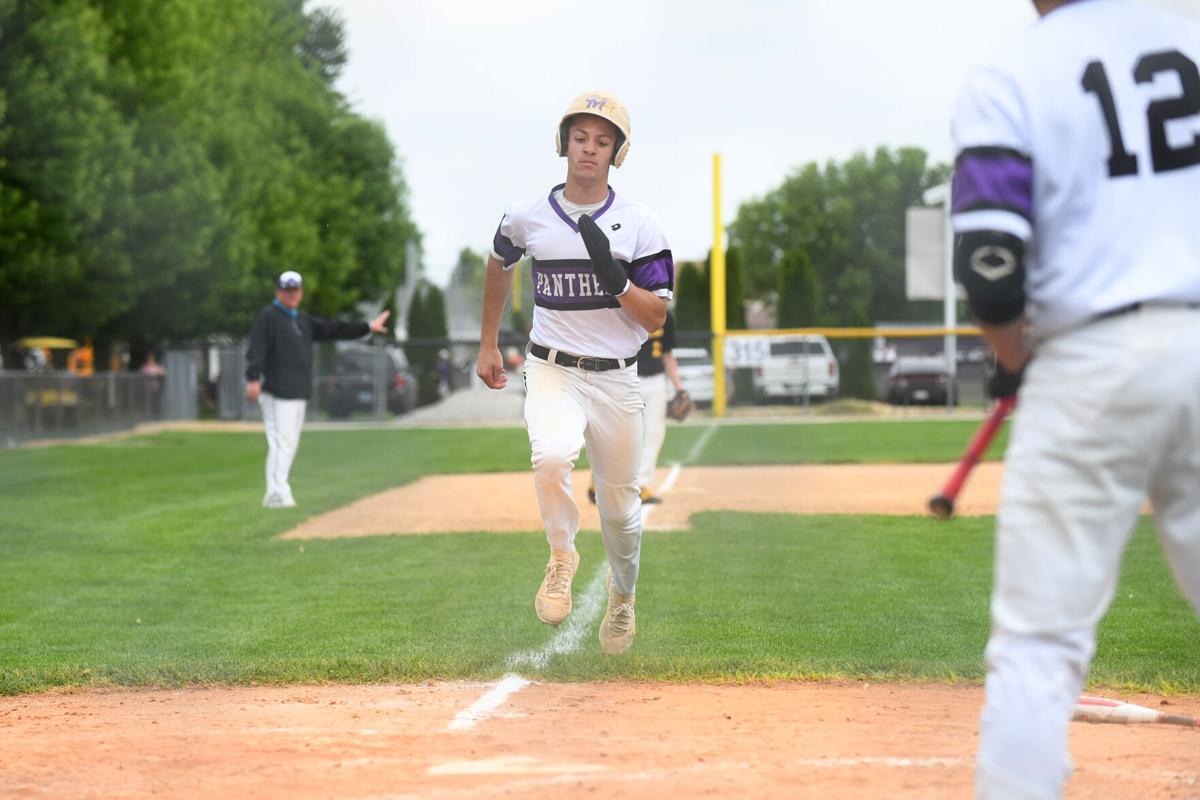 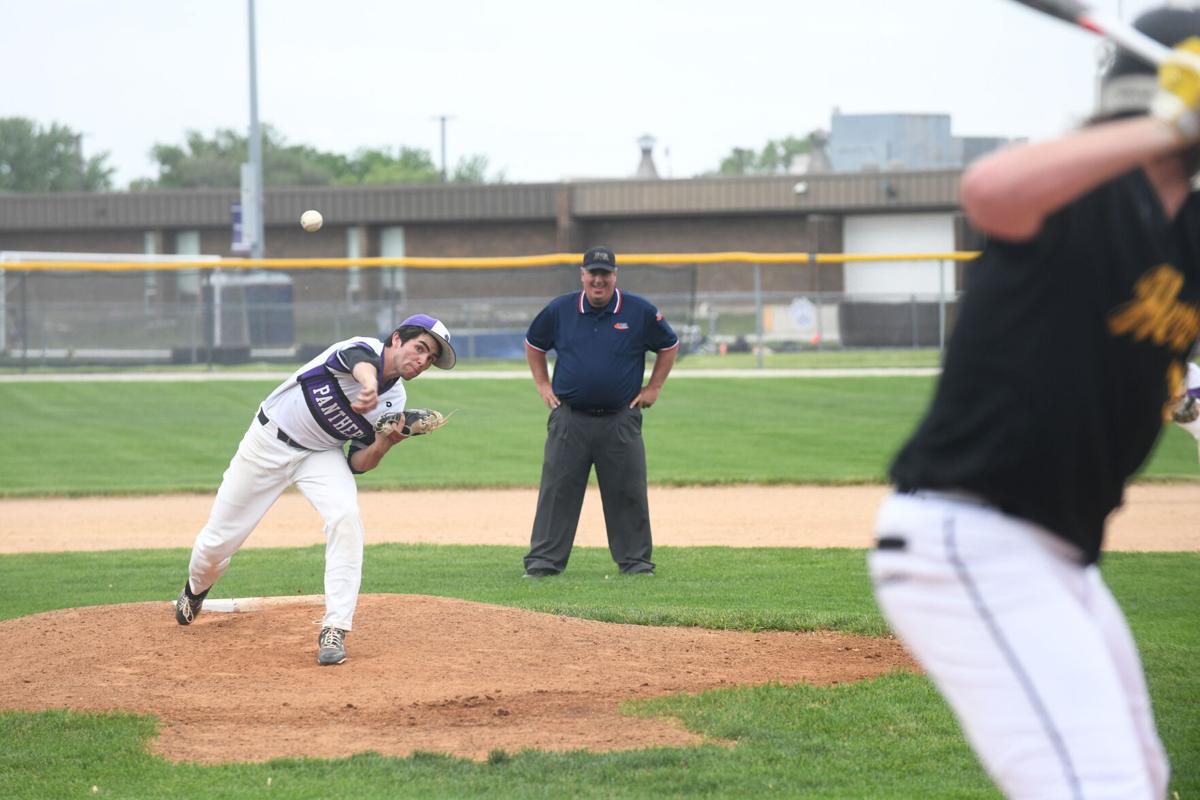 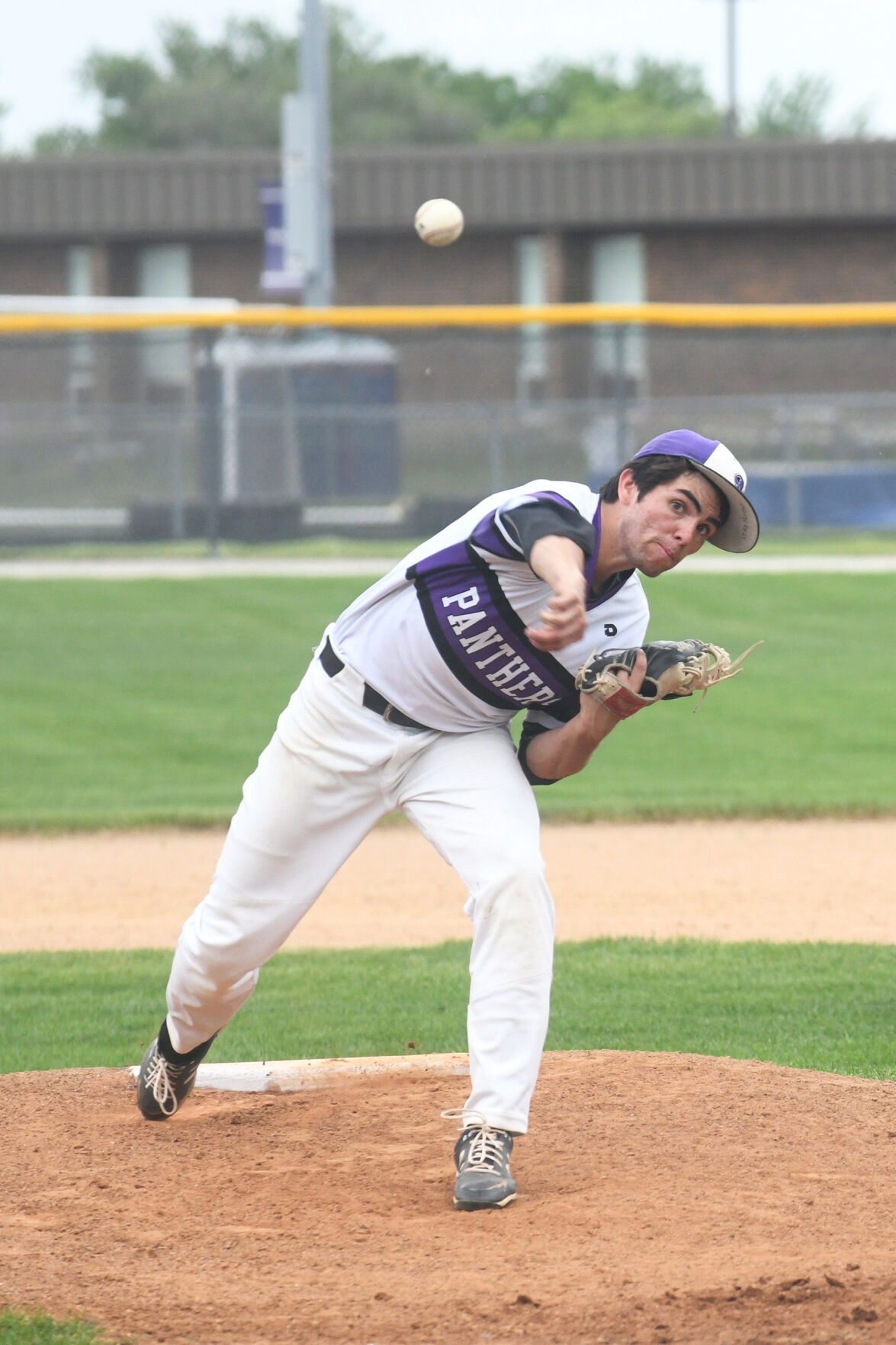 Manteno pitcher Edan Perez hurls a pitch Tuesday during the Panthers' 7-1 victory over the Herscher. 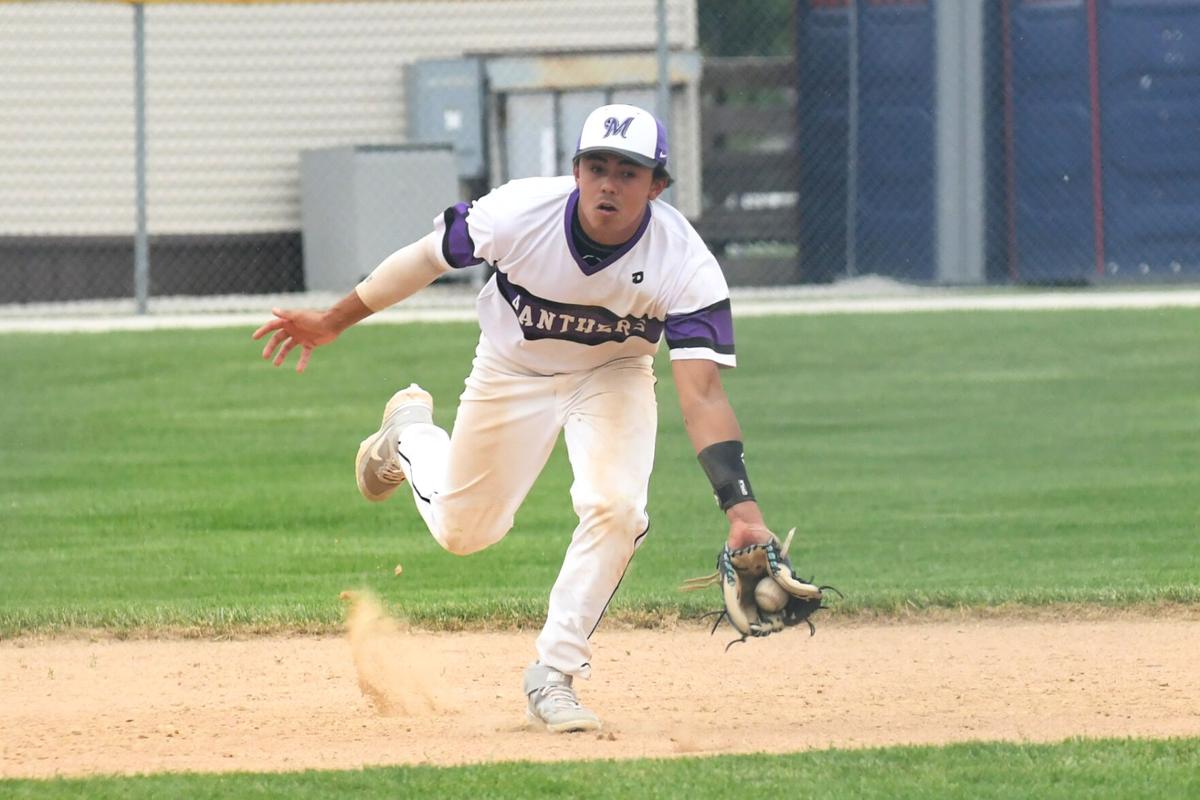 Manteno shortstop Alex Juranich fields a ball on the bounce Tuesday during the Panthers' 7-1 victory over the Herscher. READ MORE. 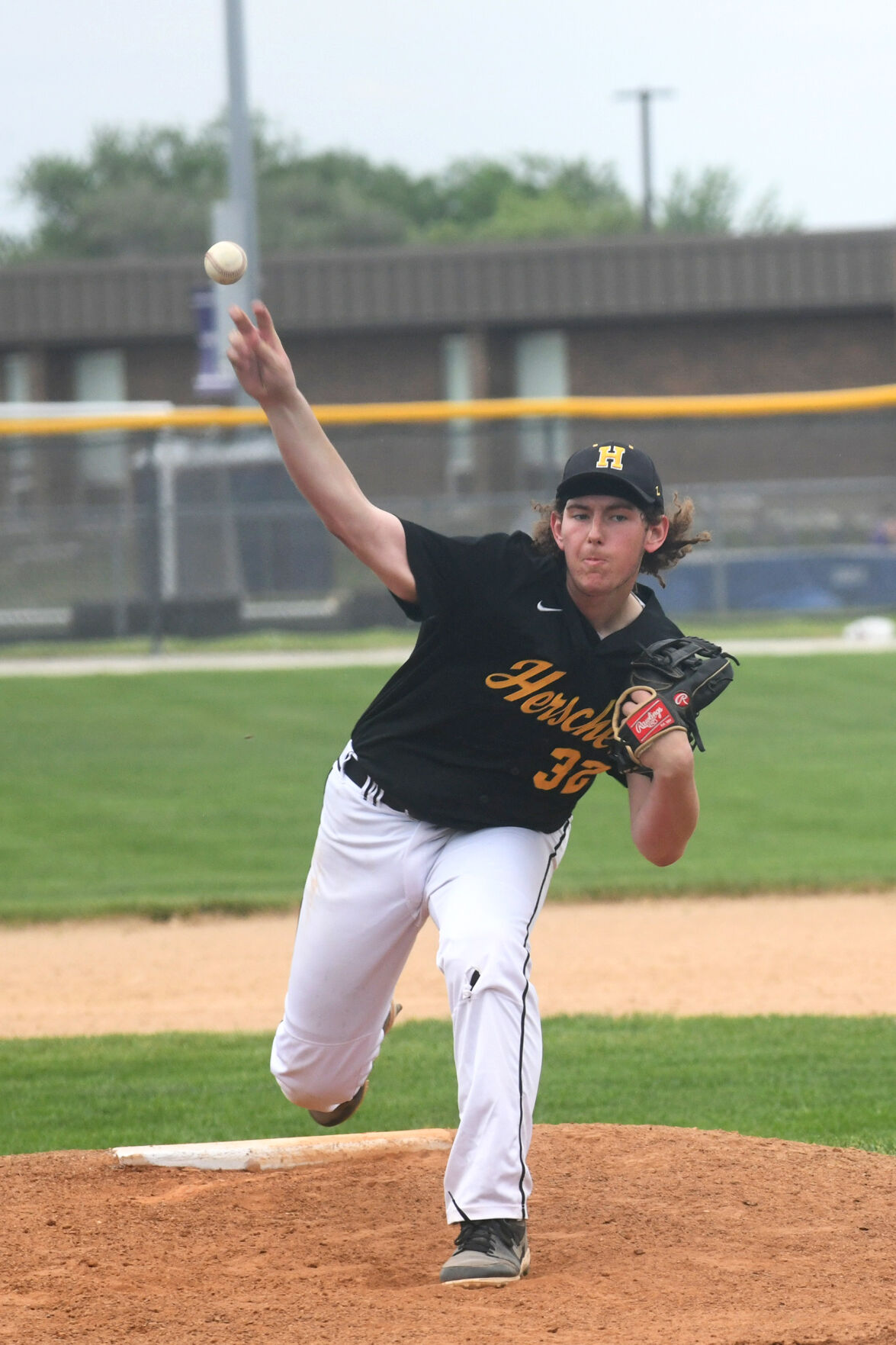 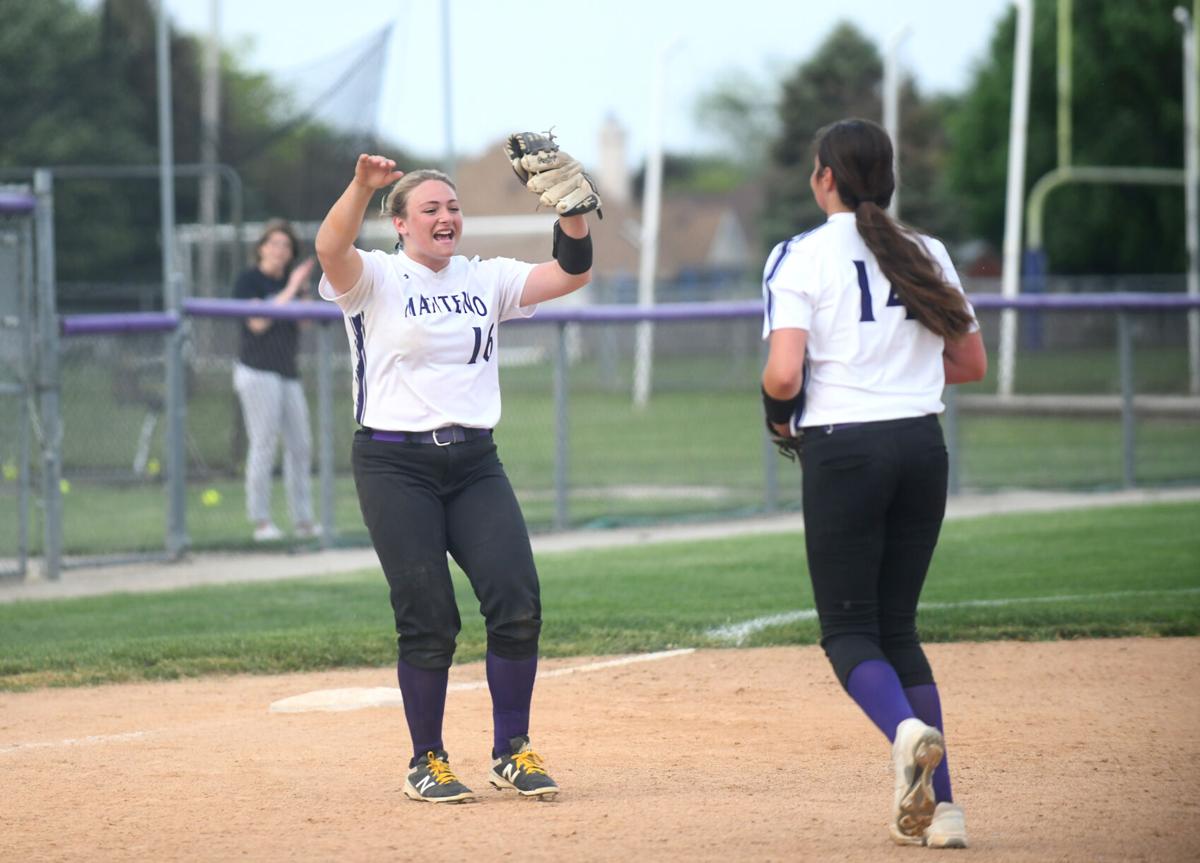 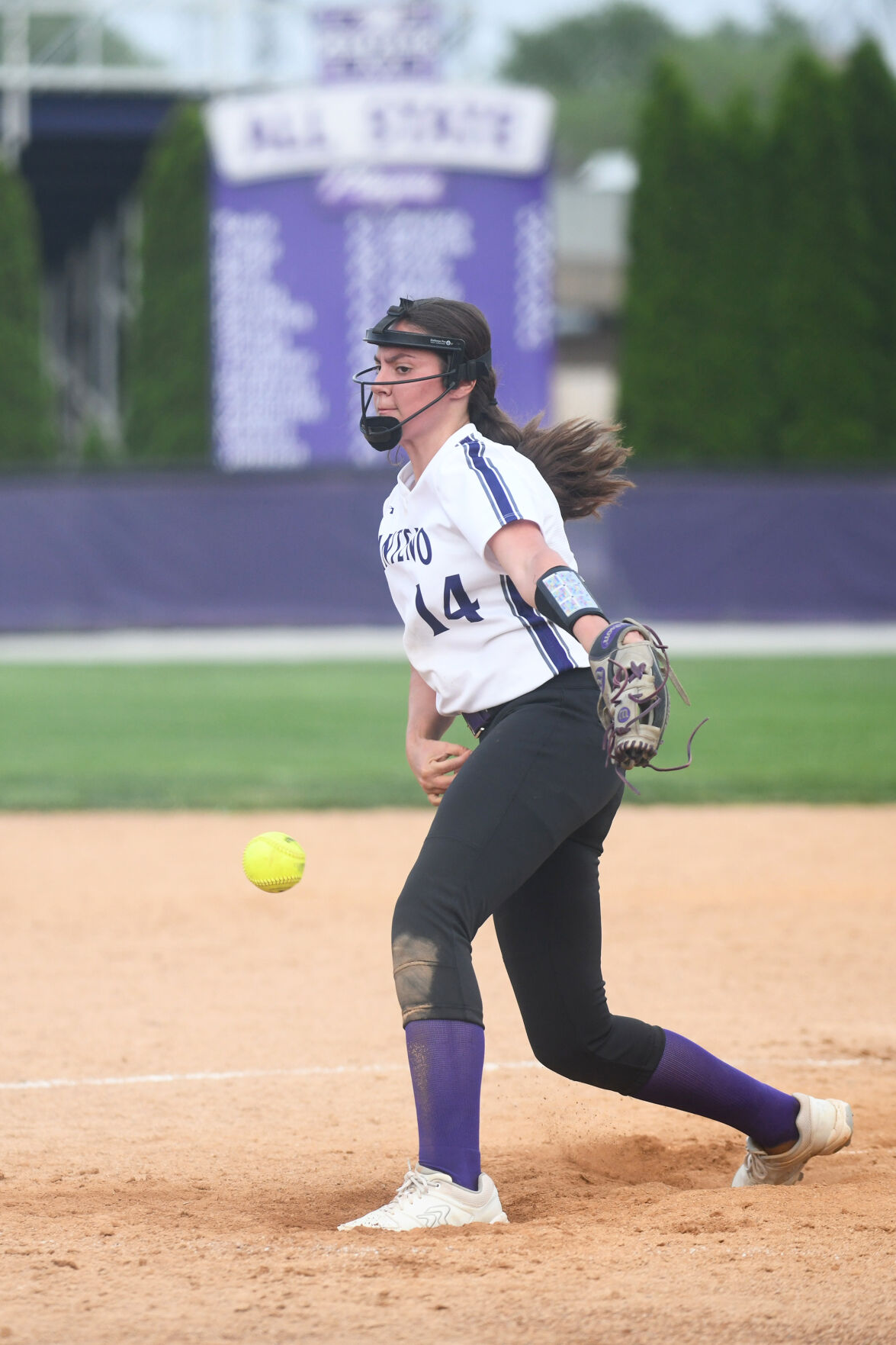 Manteno closing pitcher Alyssa Dralle throws a pitch Tuesday in the top of the seventh inning, when she tallied three strikeouts to secure the Panthers' 7-6 victory against Herscher. 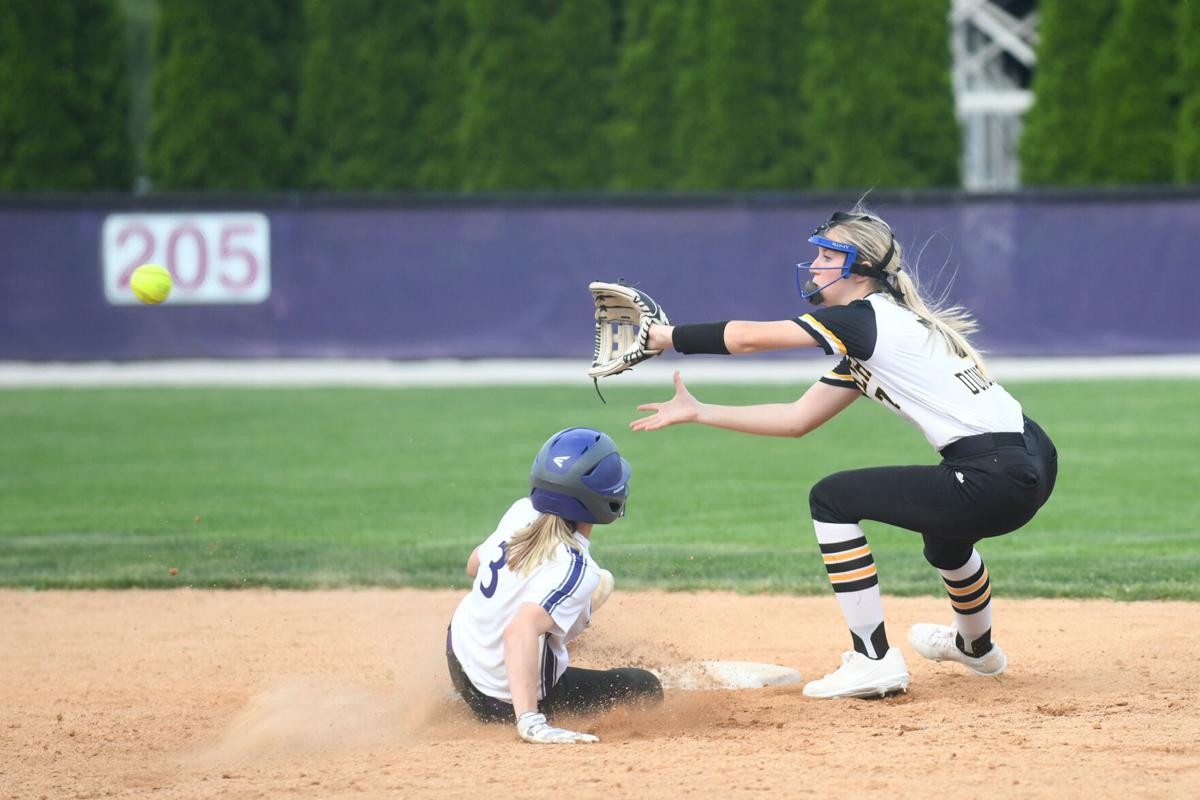 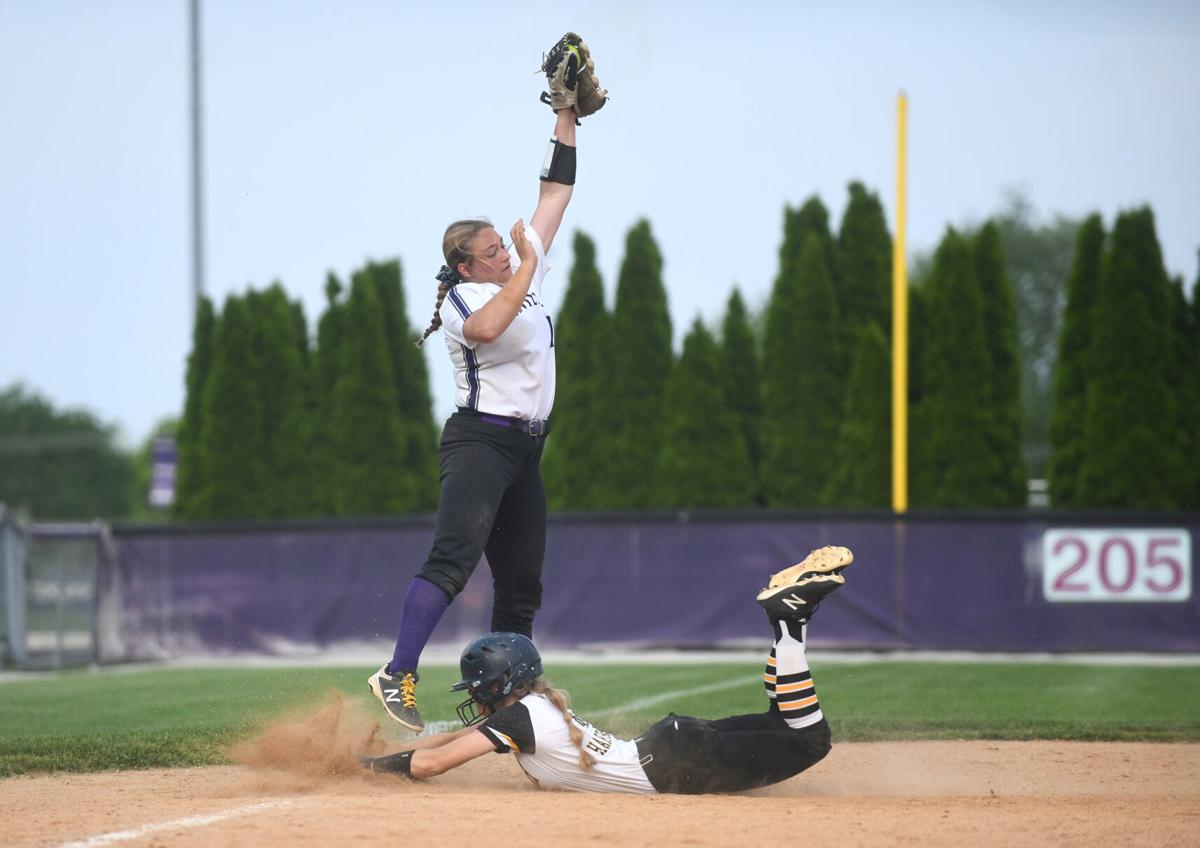 Manteno's Avery Osborn jumps for a throw as Herscher's Rylie Hartman safely slides into third base Tuesday during the Panthers' 7-6 victory over the Tigers. READ MORE. 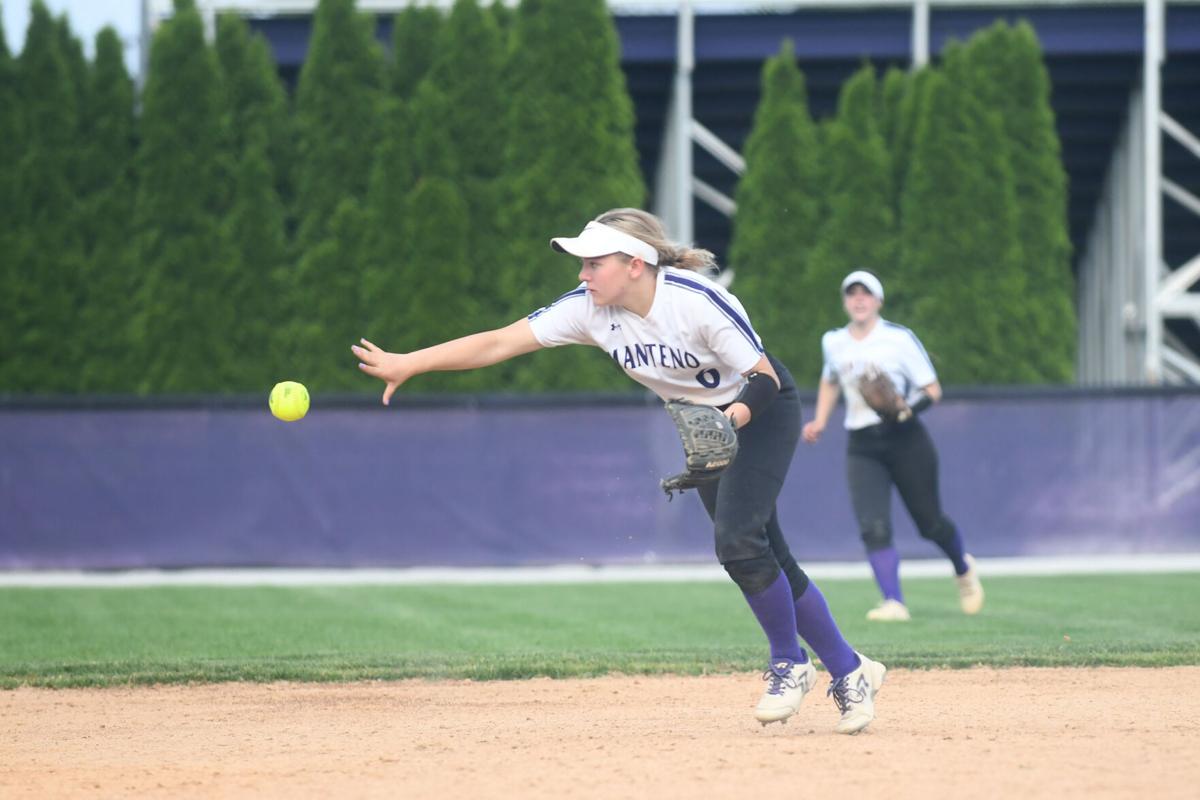 Manteno shortstop Kayla Melia flicks a fielded ball to third base Tuesday during the Panthers' 7-6 victory over the Tigers.

Manteno pitcher Edan Perez hurls a pitch Tuesday during the Panthers' 7-1 victory over the Herscher.

Manteno shortstop Alex Juranich fields a ball on the bounce Tuesday during the Panthers' 7-1 victory over the Herscher. READ MORE.

Manteno closing pitcher Alyssa Dralle throws a pitch Tuesday in the top of the seventh inning, when she tallied three strikeouts to secure the Panthers' 7-6 victory against Herscher.

Manteno's Avery Osborn jumps for a throw as Herscher's Rylie Hartman safely slides into third base Tuesday during the Panthers' 7-6 victory over the Tigers. READ MORE.

Manteno shortstop Kayla Melia flicks a fielded ball to third base Tuesday during the Panthers' 7-6 victory over the Tigers.

MANTENO — Both came in completely different ways, but Manteno’s baseball and softball teams left their home turf with wins against Herscher on Tuesday in battles of Illinois Central Eight Conference action.

With a 3-0 lead for a majority of the way, Manteno baseball starting pitcher Edan Perez was nothing short of dominant on the mound to help the Panthers to a 7-1 victory in seven innings of action.

Perez went to the mound with a 2-0 lead in the first inning after he helped himself by securing an RBI off a sacrifice fly before Jack Snyder later scored on a defensive error by Herscher. The two-run lead in the opening frame was all Perez needed to improve to 7-0 on the mound as he went on to retire 21 of 24 batters faced, with 13 of them coming off punch outs.

“It felt good to pick up the win against Herscher,” Perez said. “We’ve had a few close games with them, and so I’m happy we were able to grab the momentum early and never look back.”

The win improved the Panthers to 26-2 overall and allowed Manteno to become the first varsity baseball team to go undefeated in regular season conference play in school history, tallying a perfect 14-0 record in ICE play to solidify the conference crown.

“Obviously, one of our goals this season was to go out and win a conference title,” Panthers coach Matt Beckner said. “I’m extremely happy with the way the team got it done. ... Our guys battled and brought their A-games every conference game.

“It says something to go undefeated when you are playing the caliber of opponents we have in our conference.”

There wasn’t much offense for the Tigers given Perez’s ability to shove on the bump. Herscher only totaled three hits on the evening, all of which came from Camden Berns.

“Perez was lights out,” Tigers coach Eric Regez said. “I don’t think he threw more than two or three balls above our belts all game. So, he did a great job, and we tip our cap to him and move on.”

Cole Jackson led Manteno with the sticks, totaling two singles, one RBI and a run scored. Grant DeRose, Matt Gaffney and Nathan Basic each added a double. Perez snagged another win on the bump, allowing three hits and one run during seven innings, striking out 13 and walking zero.

Berns pitched hard, allowing two hits and two runs during two innings of work in his start on the mound for the Tigers. He also added all of Herscher’s hits with two singles and a double.

The softball game came down to the wire, as freshman slugger Alyssa Dralle completed a late-game rally that saw Manteno turn a 6-1 deficit into a 7-6 win.

“We have had a rough week losing four of our last five coming into tonight, with many of them being walk-offs or extra-inning loses,” Panthers coach Josh Carlile said. “We had a bunch of girls step up in different spots in the lineup, and we had three pitchers throw, and they all did their job. I was just happy with how my team performed.”

Down 6-1 in the bottom of the fourth inning, the Panthers’ bats finally came alive, as they erupted for six runs. With Kayla Michalesko on first and Avery Osborn on second base, Lily Bivona ripped a double to centerfield to drive in Osborn and move Michalsko to third. Dayli Dwyer then reached first on a single to load the bases before Chloe Boros drew an RBI walk. Karli Wenzel brought the Panthers within two runs off an RBI sacrifice fly before Reygan Carlile tied it at 6-6 with a two-RBI single. Dralle then smacked a clutch double to drive in Carlile to give Manteno a 7-6 lead heading into the fifth inning.

Clinging on to a one-run lead heading into the sixth, Coach Carlile made the decision to put his ace on the mound, Dralle, who went two scoreless innings, giving up one hit and striking out five, including three straight punch outs to end the game in seven innings of play.

“It’s hard to remember sometimes that Dralle is a freshman,” Josh Carlile said. “She comes in and bats in the three spot and is our No. 1 pitcher. She never changes her emotion, and it’s really nice as a pitcher because she doesn’t get rattled.”

Despite the tough loss to a big rival, Herscher still is in position to control its own destiny for the ICE conference crown sitting in first place at 9-2 in conference play with four games left in the regular season.

“We just have to beat who’s in front of us and not worry about the other stuff,” Tigers coach Mike Cann said. “We control our own destiny, and any type of conference championship would be great for these girls.

“They’ve worked very hard and always grind to the end. Unfortunately, tonight, it was just one bad inning [that] cost us six runs.”

Bivona went 2 for 3 with two doubles, a run scored and an RBI to lead Manteno at the plate. Dralle went 1 for 4 with the eventual game-winning RBI off a double and pitched two scoreless innings in relief action with five strikeouts. Wenzel drove in two runs on three singles in three plate appearances.

Mia Ruder barreled three singles for an RBI and a run scored to lead Herscher at the plate. Rylie Hartman chipped in two RBIs on two singles.

Central improved to 14-0 on the season while also clinching the Sangamon Valley Conference crown with a 15-0 victory over Cissna Park.

The BBCHS freshmen baseball and softball teams held a Skills Day for members of the ACBA Champions League over the weekend.

BASEBALL: Boilers have uncharacteristic slow start in loss to Andrew

Poor approaches at the plate and wild pitching left Bradley-Bourbonnais scoreless in its home loss to Andrew on Wednesday.

Both the Wilmington baseball and softball teams earned double-digit victories in front of home crowds during Wednesday's clash of nonconference rivals.

The baseball team came from behind in walk-off fashion while the softball team exploded at the plate late as the Tigers earned a pair of postseason wins on Wednesday.

Some of the best sports photos from local games and meets in June.

Some of the best local sports photos from games in early June.