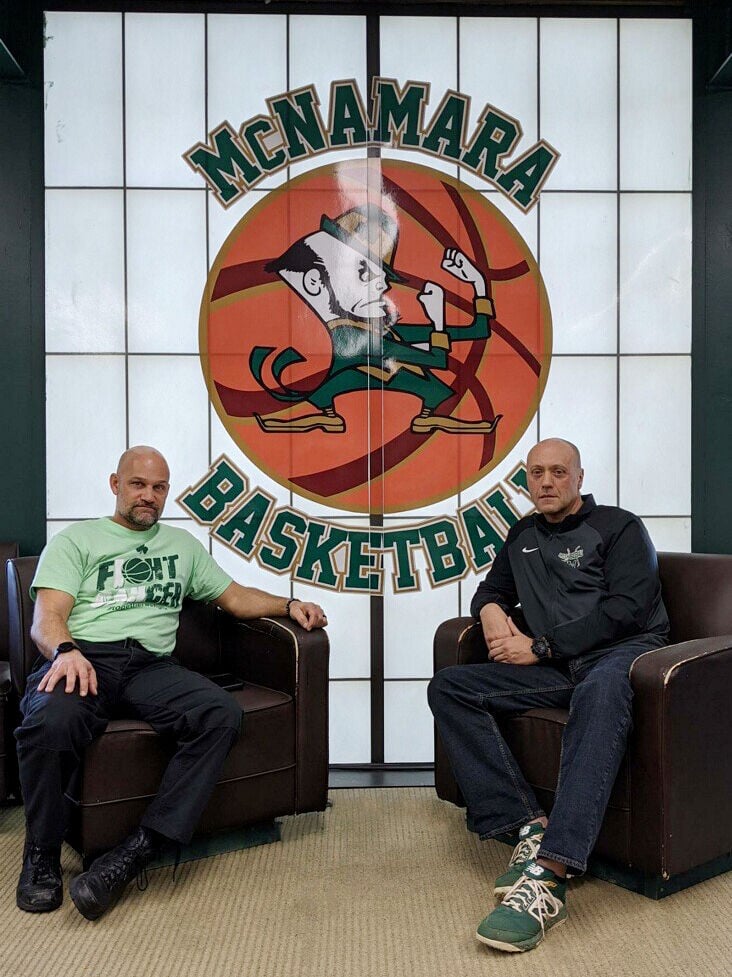 Bishop McNamara basketball coach Adrian Provost, left, and baseball coach Kurt Quick were diagnosed with cancer within 11 months of one another. As fellow coaches and police officers, the two longtime friends now are fighting the battles of their lives together. 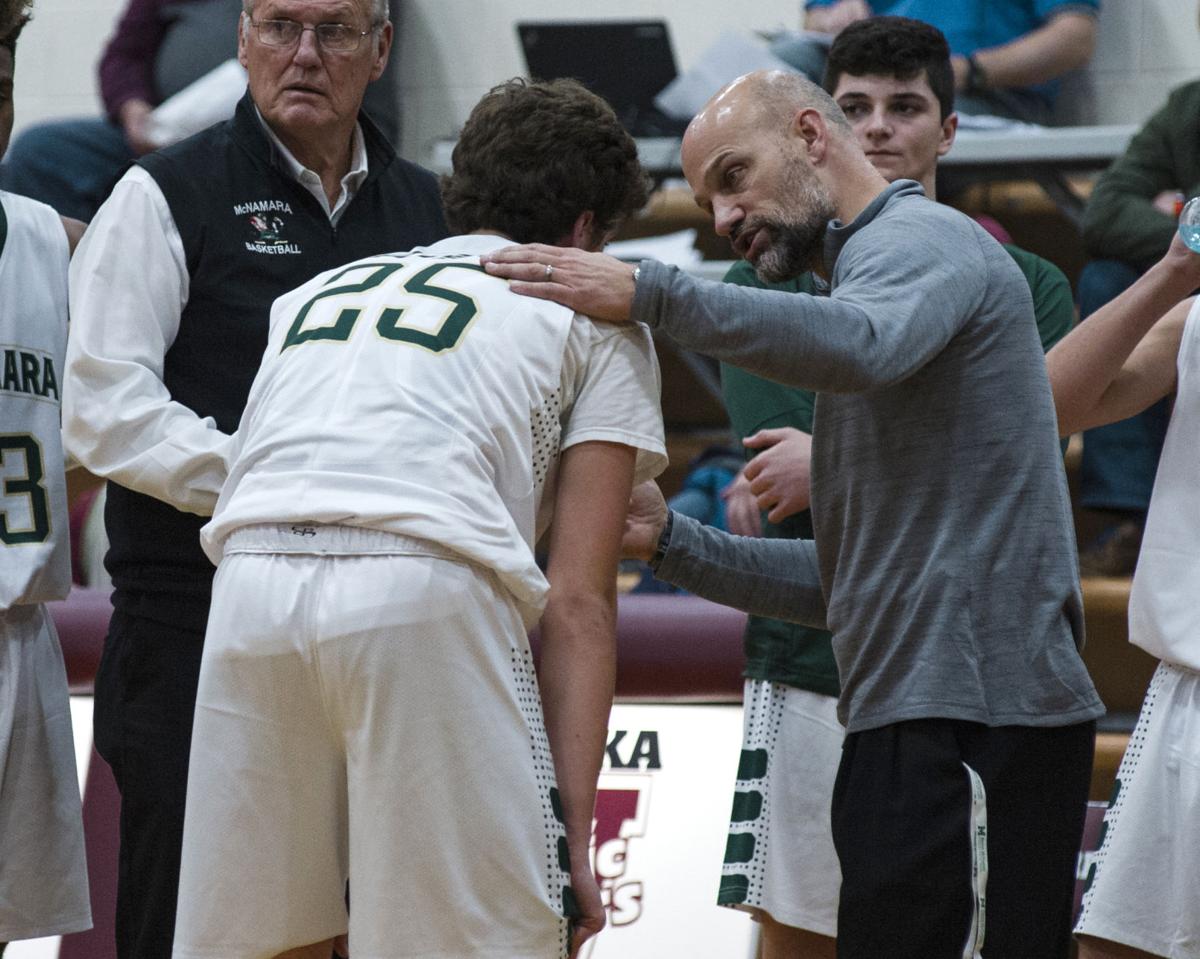 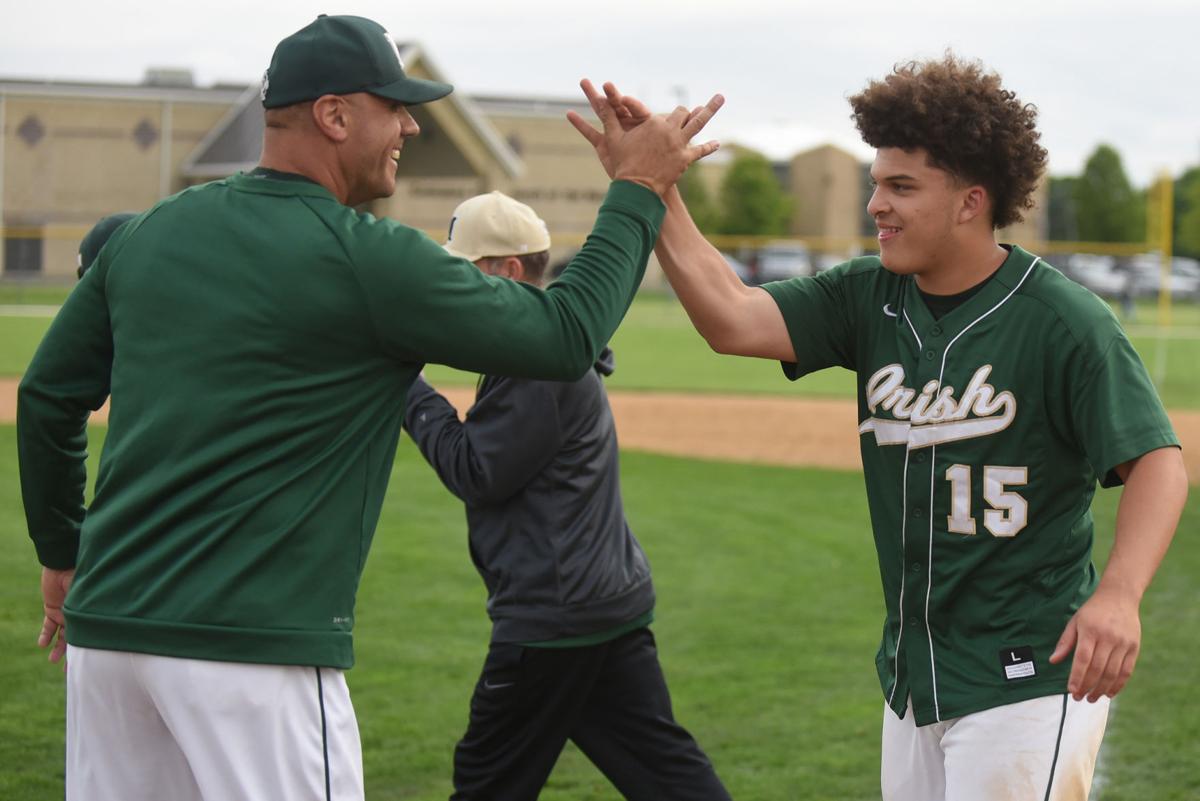 Bishop McNamara basketball coach Adrian Provost, left, and baseball coach Kurt Quick were diagnosed with cancer within 11 months of one another. As fellow coaches and police officers, the two longtime friends now are fighting the battles of their lives together.

Adrian Provost and Kurt Quick aren’t strangers to fighting battles. As police officers — Provost as a Bradley police officer and Quick as an Illinois State trooper — part of their responsibility is to fight crime.

As coaches at Bishop McNamara Catholic High School — Provost the head boys basketball coach and Quick the head baseball coach and assistant in basketball and football — they teach their kids how to fight battles on and off the playing surface.

Neither of them imagined they would be fighting for their lives, especially together. But after receiving their cancer diagnoses less than a year apart, that’s exactly what the two are doing now.

Quick was diagnosed with multiple myeloma, a blood cancer typically found in older people, in November 2019, just before the Irish’s season-ending loss in the football state semifinals.

For Quick, he didn’t understand why the disease chose him or even what he could do to fight it, but his initial reaction was to begin that fight as soon as possible.

“I didn’t really understand the cancer — that was one of the big things — and how potent it was,” Quick said. “That was the biggest thing, not knowing what was going on and just wanting to get answers.”

The same time Quick was learning life-changing news, Provost was with his wife, Yvonne, as she was learning she had beaten a battle with breast cancer that began that May. It was while the couple was hearing that news Adrian got a text from Quick informing him of his diagnosis.

“We felt a little hollow,” Yvonne said. “Adrian shared the text with me and then just looked over at me, and you want to be happy of the dark chapter we were finishing, but then a close friend finds that out, and it quickly felt like a nightmare.”

From that moment, the Provosts instantly became a pillar for Quick to lean on as he began facing the physical, mental and emotional difficulties associated with cancer. And that bond grew stronger last October, when Adrian was diagnosed with stage 1 thyroid cancer.

“I had just left [dinner] with my parents and my primary doctor called ... and told me I had cancer,” Adrian said. “I was on the phone with him the entire way home, and after [the doctor] said I had cancer, I didn’t remember another word he said. ... Everything just stopped.”

By the time he learned of his diagnosis, Adrian already had seen up close what cancer can do — not only at home with Yvonne but also with his friend. Quick was at that final Irish football game in Murphysboro. He was on the bench at the beginning of the basketball season before he had to briefly step away, but he was in good enough spirits to begin the baseball season last spring before it was canceled because of COVID-19.

For Quick and Provost, it was the sports and kids they coach that have been the prime motivating factors in their battles.

“I couldn’t walk from the couch to the door and was just pushing because I wanted to be here and be around the team just to watch; I don’t know what I’d do without sports,” Quick said. “Wins are obviously good, but it’s where you see kids down the road and the success that comes from the kids you coached.

“But when they found out I was sick and reached out with encouragement and prayer … it really hits you. It’s why you do it.”

Andrew Arseneau is a senior at McNamara and has played for both coaches. He said he and his twin brother, Matthew, saw what they already knew about Quick when he made it a point to show up to games and practices on days he barely could climb out of bed.

“He really cares, and he wanted to be there to help as much as he could,” Andrew said. “Even though he’s going through it, he’s still found a way to get to practice and games and just make it feel as normal as possible.

“It showed he cares about us, which we already knew.”

It’s been more than just the athletics family that has been a pillar of support for the coaches but the McNamara family as a whole. Adrian saw that firsthand when Yvonne helped compile scores of video and text messages from people in the McNamara community before his initial biopsy.

For Adrian, the thank-yous he has sent in return never can compare to the messages he received and has continued to receive.

“It means a lot, and I tell people that,” Adrian said. “You have no idea what it means when you’re going through a tough time, and I think God works this way, but I’ll be having a tough moment mentally, and I’ll get a text from someone that changes it.”

“Besides [coaching] they’re both also law enforcement people; I mean they’re basically superheroes,” Krieg said. “I can’t think of two finer people. ... You just never really know, and I pray for both of them constantly.”

McNamara principal Terry Granger said as a longtime coach, teacher and administrator, including for both coaches, he’s used to being the one teaching lessons, and now he’s remembering those lessons and to follow them himself when he sees how Adrian and Quick are battling their adversity.

“I think they both have that attitude that this isn’t gonna defeat them,” Granger said. “I look at the times throughout my day and find moments that I have to remind myself of the lessons I taught them.

“When I think about those two guys ... the problems that come across my desk become very minute.”

Aside from the McNamara family, both coaches have seen what cancer does within a family, twice now for Adrian. He and Yvonne have two sons who attend McNamara — Jaxson, a sophomore, and Trey, an eighth-grader.

“Cancer doesn’t care who you are, what race you are, how much money you have, where you go to school or what you do for a living,” Adrian said. “Unfortunately, my family has had to deal with it more than others, but my wife runs our house, and her faith lifts us up. ... Our family is stronger now than we were two years ago, and that’s the positive of cancer, I guess.”

Yvonne said her and Adrian’s battles have given them opportunities as parents to practice some of the things they preach to their children.

“We showed them you can battle something and lean on your faith in order to get through anything,” she said. “It’s important and hard at the same time; there are some days you want to just fall apart and can’t, and [the kids] have kept us going.”

Quick also has found a silver lining with his family. Between taking time off with his diagnosis and the COVID-19 pandemic pausing sports, he’s found more time to visit his daughters, Kassidy and Delaney, at college.

“Not having sports, I go visit them more often, and it gives me a chance to go annoy them and be a pain to them,” Quick said. “[Cancer] has brought me closer to them, obviously, but I try and not tell them too much to scare them or distract them from school.”

As friends who coach together, Adrian and Quick always have spent a lot of time together, but that has been amped up since Quick’s diagnosis, as the pair now meets for lunch almost every day. While those friendly encounters used to pertain to sports and their jobs as police officers, they now also include cancer battle plans or sometimes nothing at all.

“When we’re together, there’s a lot of things that just go unspoken,” Adrian said. “When [Quick’s] going through a rough patch, he doesn’t have to say it. I know it, and we just exist together and help each other out.”

But the two are battling much different fights. Adrian hopes his thyroid cancer was caught early enough it can be cured. Quick had a stem cell treatment last May that potentially could add decades on to his life expectancy, but it has yet to be determined if the treatment is going to be successful long term or not.

“I’ve heard from some people in the community who have had it that are my age that reached out to me,” Quick said. “I didn’t know who they were, but they reached out and said, ‘You can live another 20, 30 years or you can live one, so enjoy every day,’ and I have.

“I enjoy the sunrises now, and it changes everything.”

The status of sports, including basketball and baseball, are still up in the air. But whenever sports make a return, both Adrian and Quick plan to be present in their coaching roles.

“It’s my therapy,” Quick said. “Being around those coaches and the kids, I love it. ... It helps you get through stuff, and it helps you try to feel normal.”