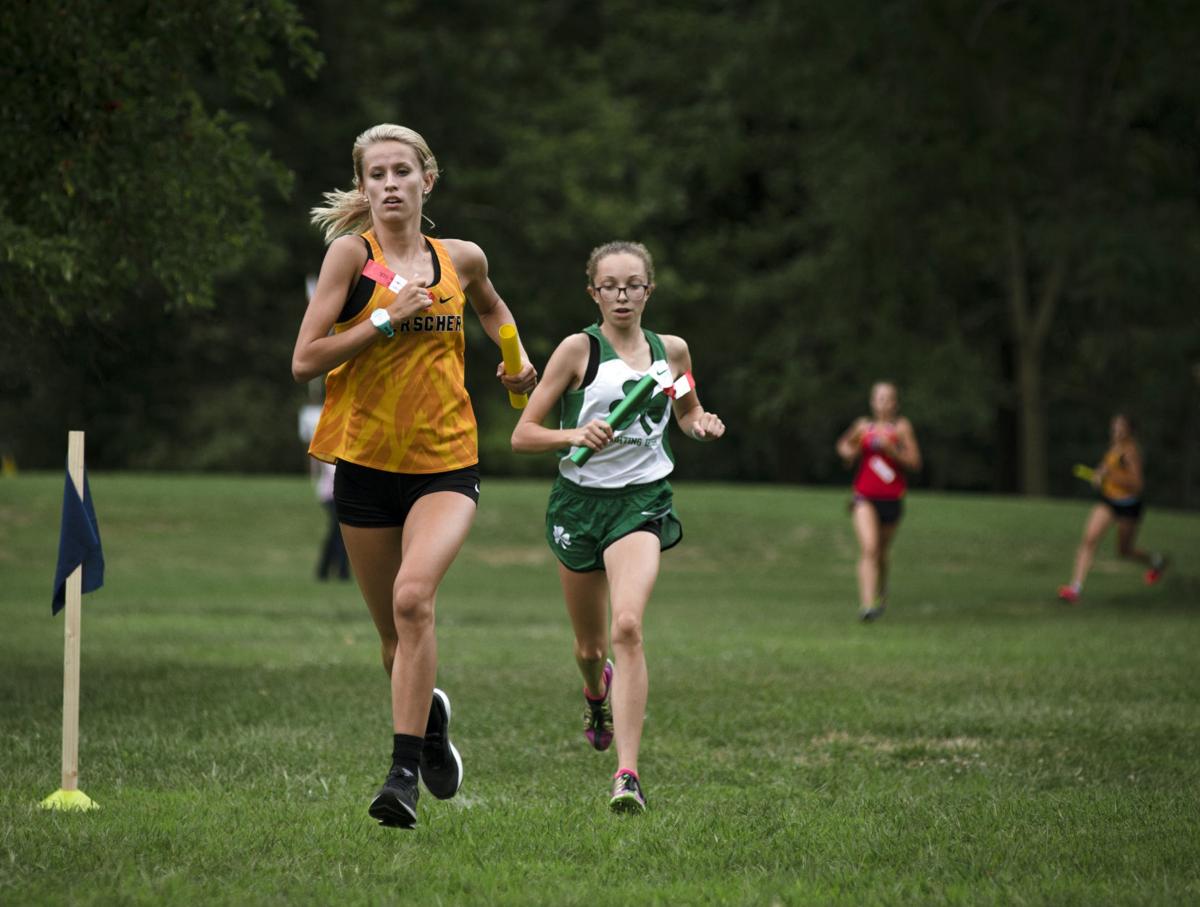 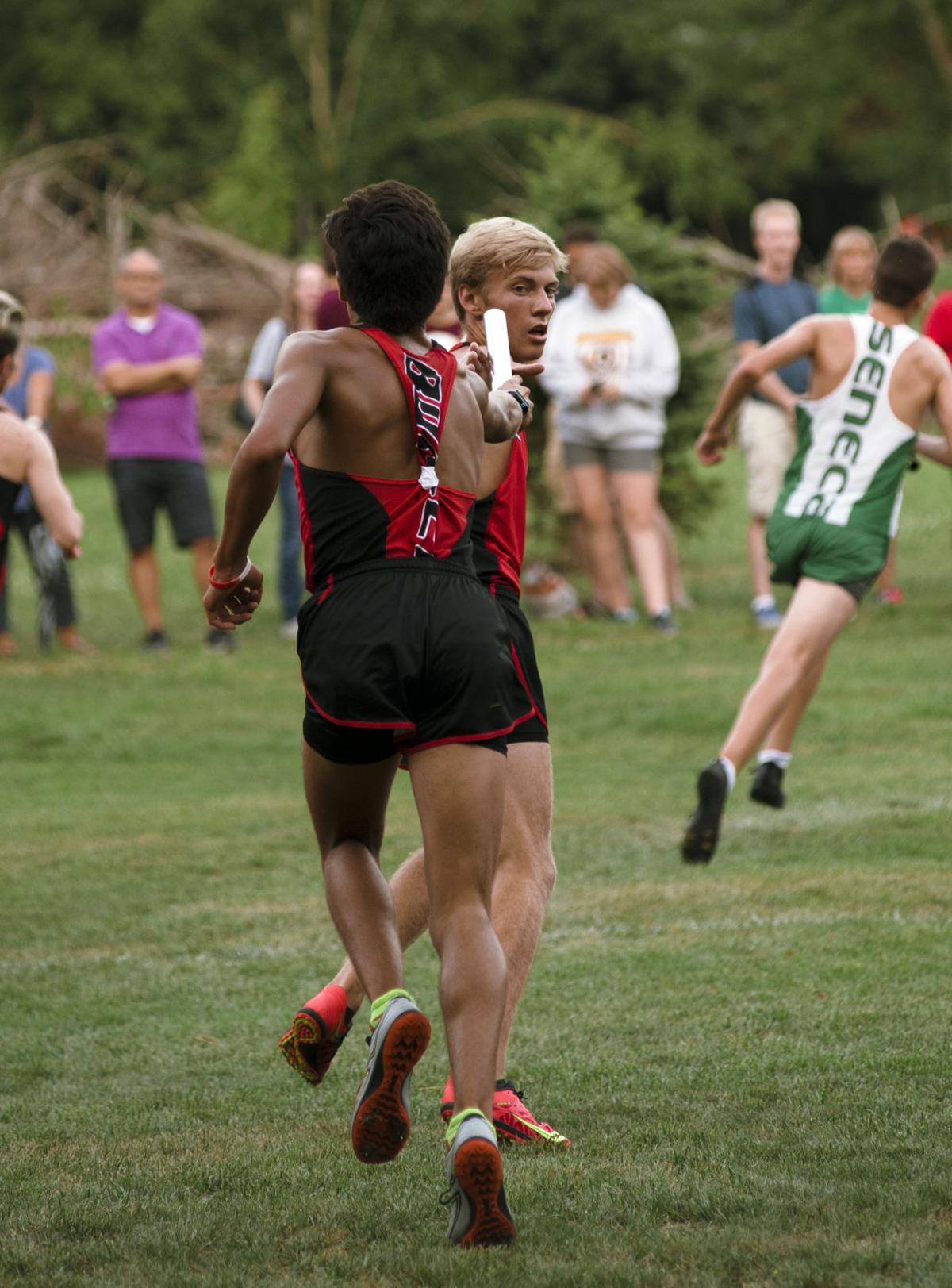 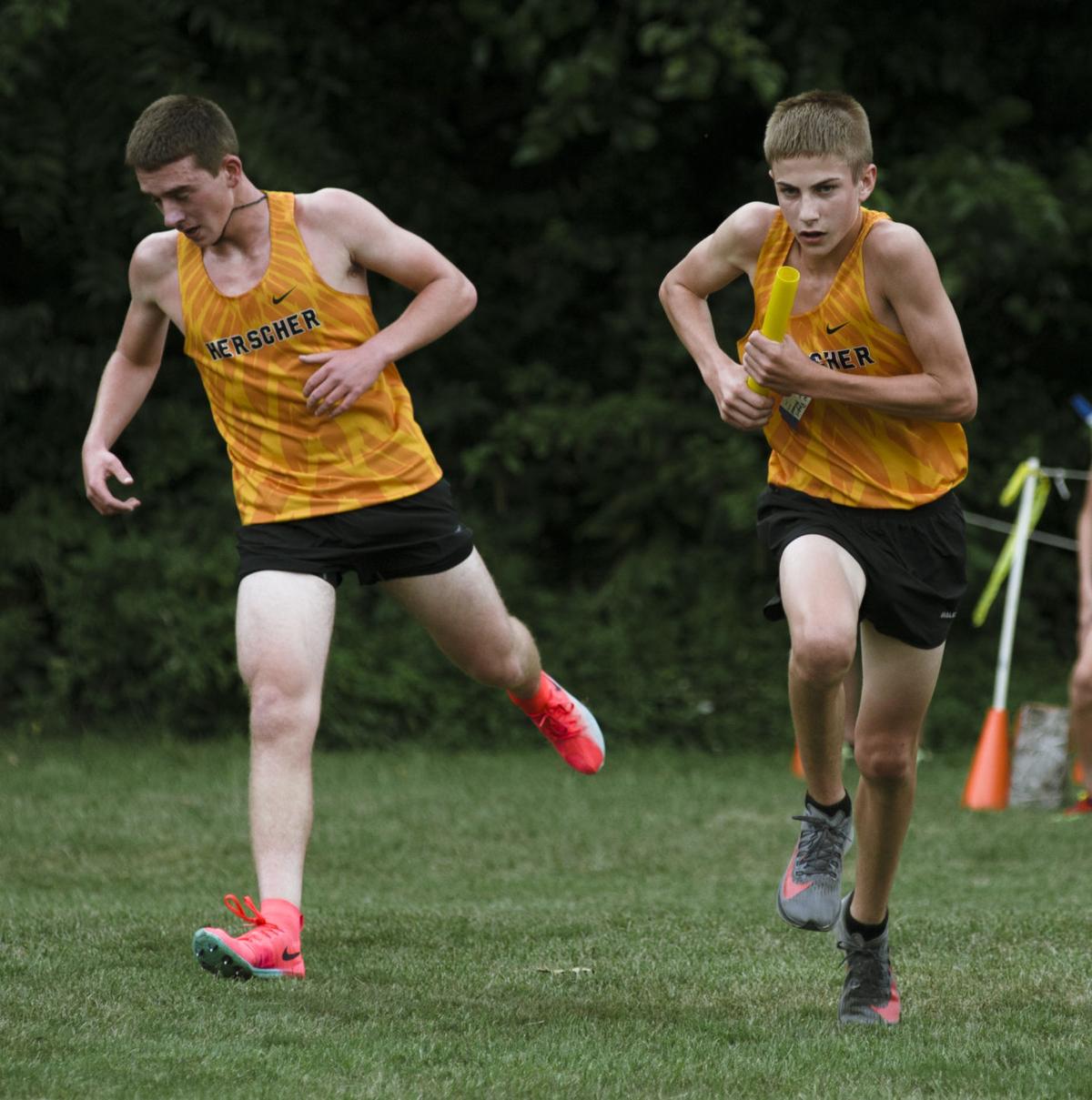 Herscher High School's Drew Rogers takes the baton from Tyler Howard to begin a leg in the Irish Conditioner Wednesday at KCC. 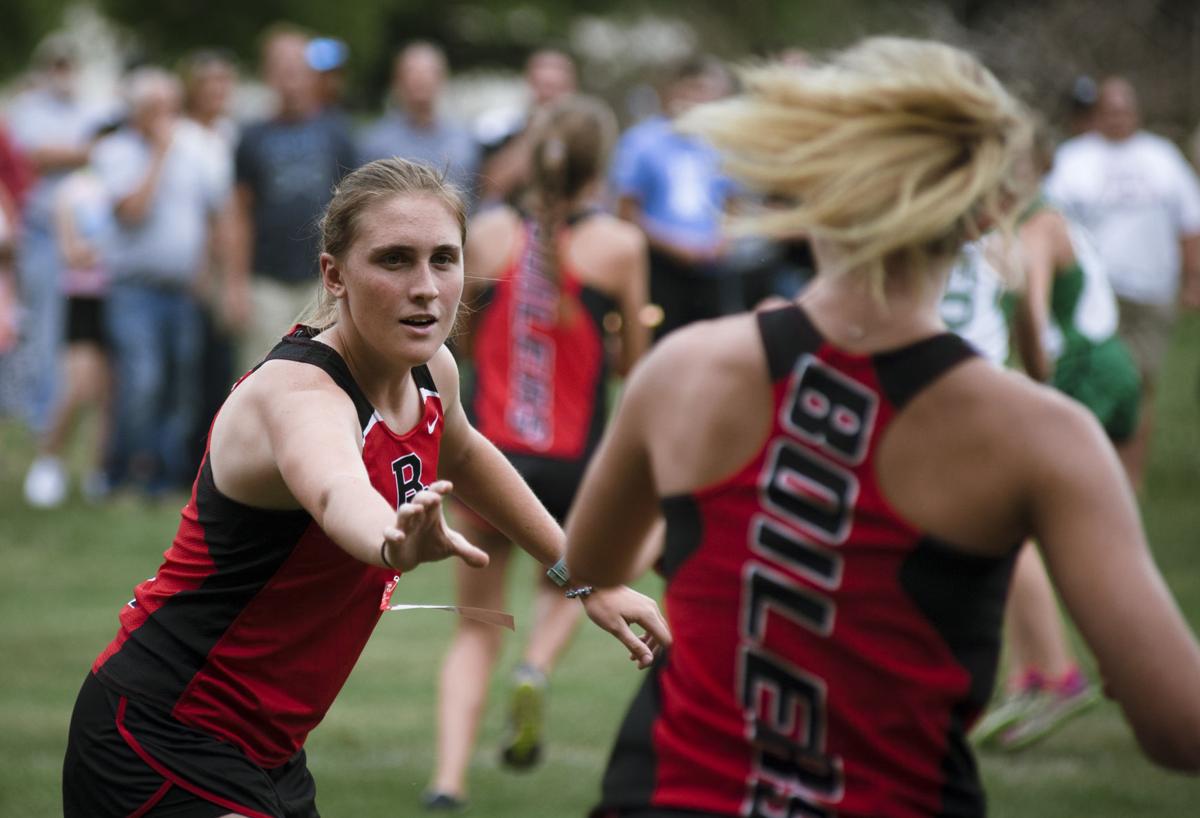 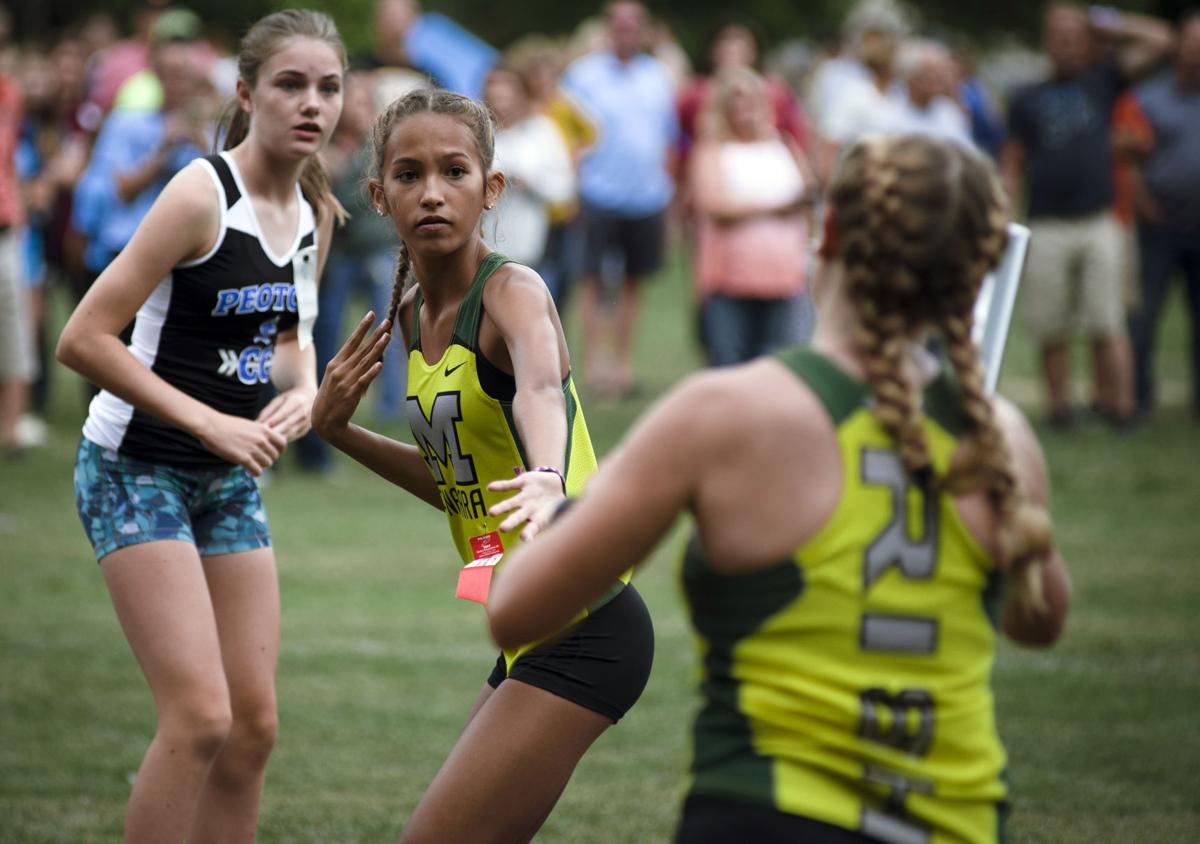 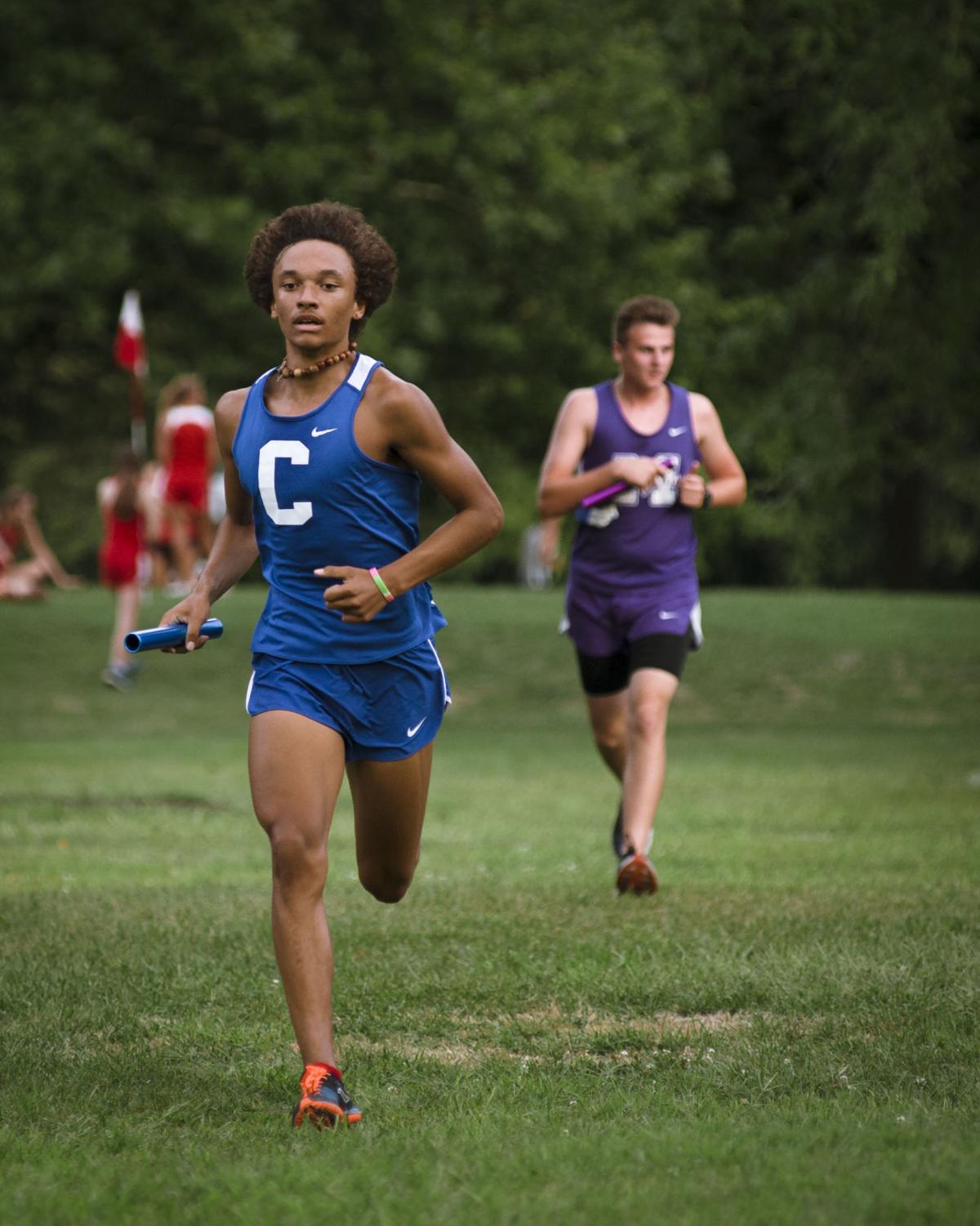 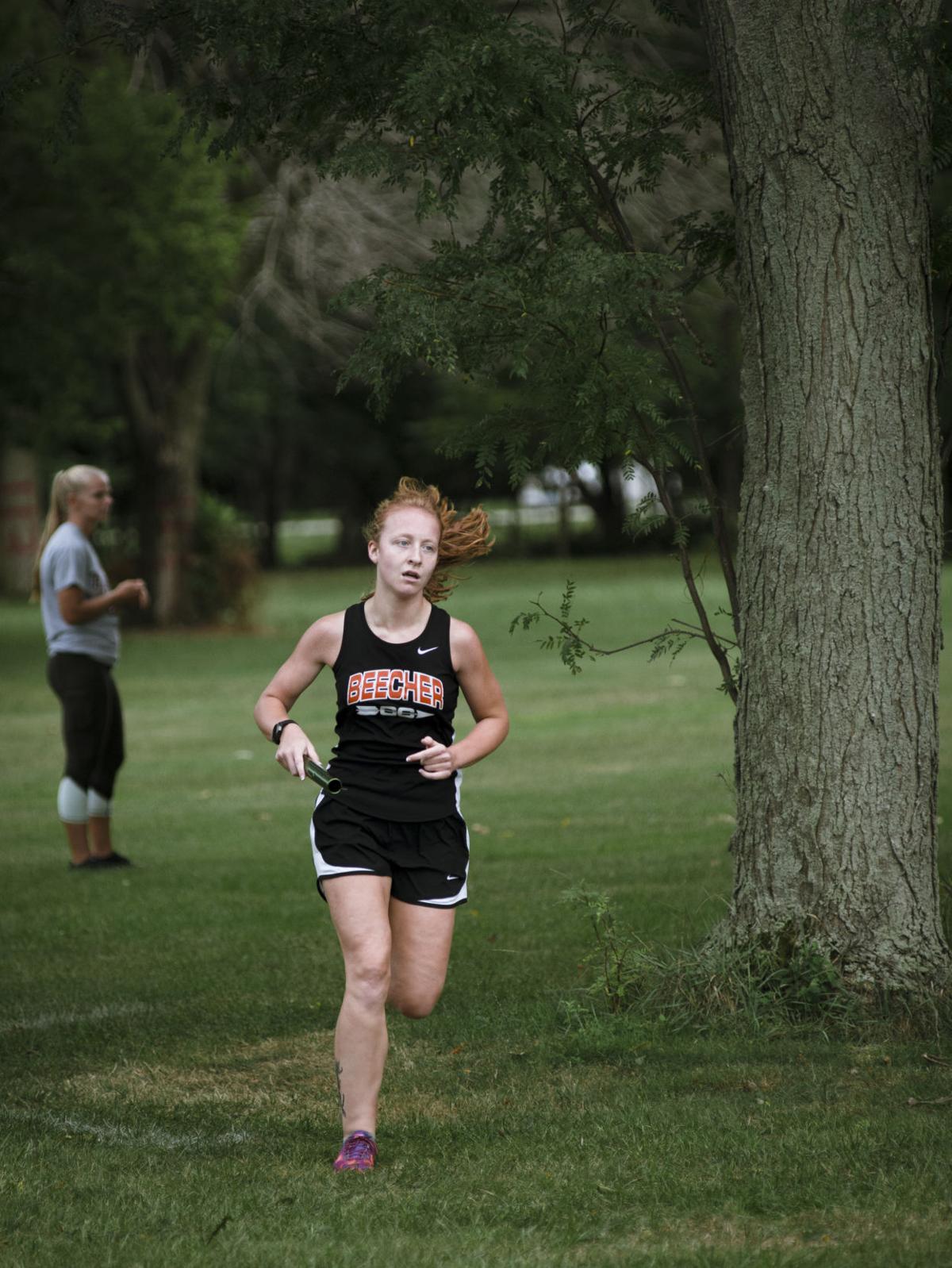 Herscher High School's Drew Rogers takes the baton from Tyler Howard to begin a leg in the Irish Conditioner Wednesday at KCC.

KANKAKEE — Last year’s Irish Conditioner was centered around the young talent on the running scene.

This year’s Irish Conditioner revolved around the top dogs staying on top of the food chain.

The Conditioner is different than a normal cross-country race. Rather than runners tackling a 3-mile course, racers are put in pairs and run a relay-style race, with each partner running a mile before handing off the baton to his or her partner. The varsity girls race for 4 miles total, and the boys run 6. The top three pairs score for each team.

After winning last year’s Irish Conditioner, the Herscher girls returned for an encore performance and climbed the mountain once again for back-to-back first-place finishes.

The Tigers utterly dominated the field of 15, taking home three finishes inside the Top 8 for a total score of 15.

Just for emphasis, Bradley-Bourbonnais finished in second place ... with a 38.

“It was definitely a fun day,” Herscher coach Rick Livessey said. “I was extremely pleased with the groups. The girls are about where we expected to be at this time of the season. We may not have as many front runners as other teams, but we have a lot of great groups, which is what counts in the end.”

Josie Mendell and Jillian Milton took third place for Herscher with a time of 24:33.

Teammates Kylie Lockwood and Molly Raymond finished behind them in fourth place at 25:15, and Gwen Meyer and Natalie Rink topped out in eighth place with a time of 25:44.

After a fourth-place finish in state last year, expectations have been set in Tiger circles. Health is the only thing potentially separating the Tigers from the top prize in the state.

“Much like other sports, just need to stay healthy,” Livessey said. “Josie had a stress fracture during track, and Gwen also had a stress fracture and missed pretty much all of last season. Although I like where we’re at, I think we start too fast sometimes, and it comes back to hurt us towards the end of a race. We need to be under control from the start.”

Both Central and Bradley-Bourbonnais finished with 22 points; however, because the pair of Isaiah Ditta and Jeremy Snejberg took first place with a time of 30 minute flat, it was the Comets who edged the Boilers for the bragging rights.

“It was a really impressive performance,” Central coach Dave Ladehoff said. “The guys have been training really hard all summer, and our core group of six have been doing even more training since June. The only thing I wish we could have done was break 30 minutes, but we’ll definitely take it.”

After Ditta and Snejberg, Trevor Swanson and Jared Snejberg finished in seventh place with a time of 32:20 along with a 14th place finish from another pair of Comets.

Finishing 11th in the state last season was a good start for the Comets, but with everyone back this year, 11th won’t be satisfactory.

“Four out of the six guys who raced, their last mile was their fastest,” Ladehoff said. “We knew that we didn’t have to push it very hard, but it was nice to see them get out and push the pace against some other talented runners.”

On the girl’s side, Bishop McNamara finished in third place with 44 points, Beecher was in fifth place, and Peotone tied with Prairie Central in sixth place with 58.

Beecher’s Hailey Janssen and Tori Fasano took first place with a time of 24:05.

Bradley-Bourbonnais’ Jess Alsvig and Maiah Caise were in fifth with a 25:21.

Peotone’s Grace Battiato and Sophia Perry finished in sixth with a 25:35.

On the boy’s side, Herscher finished in fourth place with 37, Beecher was seventh with 77, and Kankakee was ninth with 111.

BBCHS’ Grayson Gonski and Jacob Fritz took fourth place at 31 minutes flat. Teammates Kellen Saindon and Max Kuxmann were eighth with a time of 32:21, and Brendan DalCanton and Kevon Holbrook finished 10th with a 33:15.