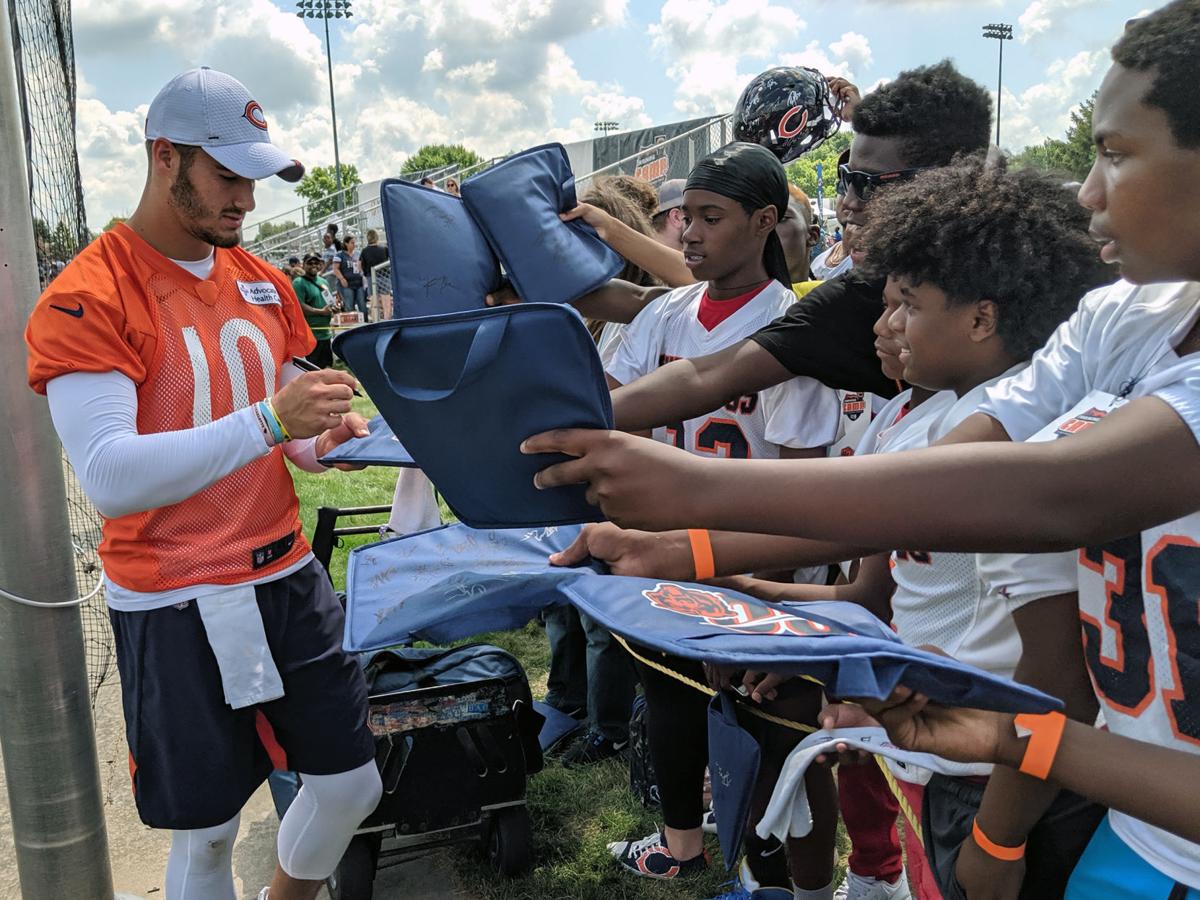 Chicago Bears quarterback Mitch Trubisky, left, signs autographs for members of the Kankakee Eastside youth football organization after Tuesday’s practice at Olivet Nazarene University. Tuesday’s practice was closed to the public as the Bears celebrated Community Day with dozens of organizations throughout the state. 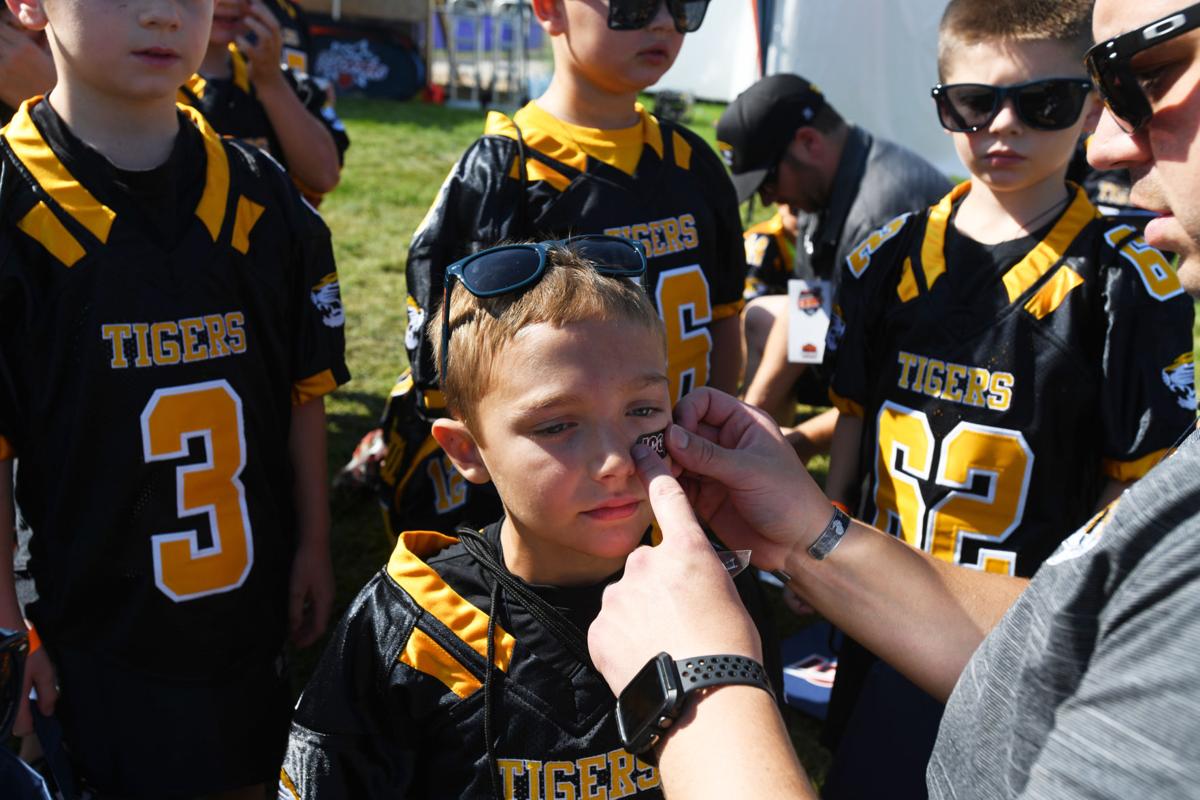 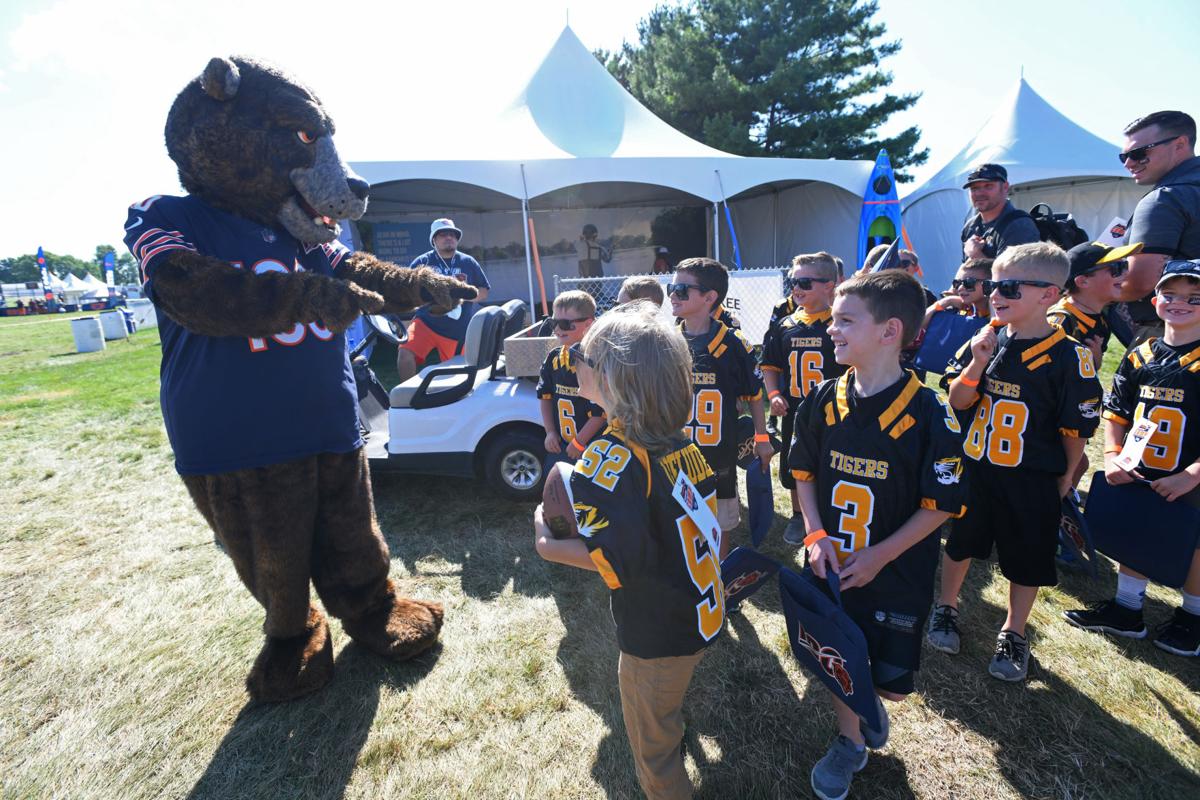 Herscher Youth Football players interact with Staley the Bear on Tuesday ahead of the Bears’ Training Camp practice at Olivet Nazarene University. The camp was closed to public, but invited 700 fans at camp from 30 community groups and youth football teams to take part in Community Day. 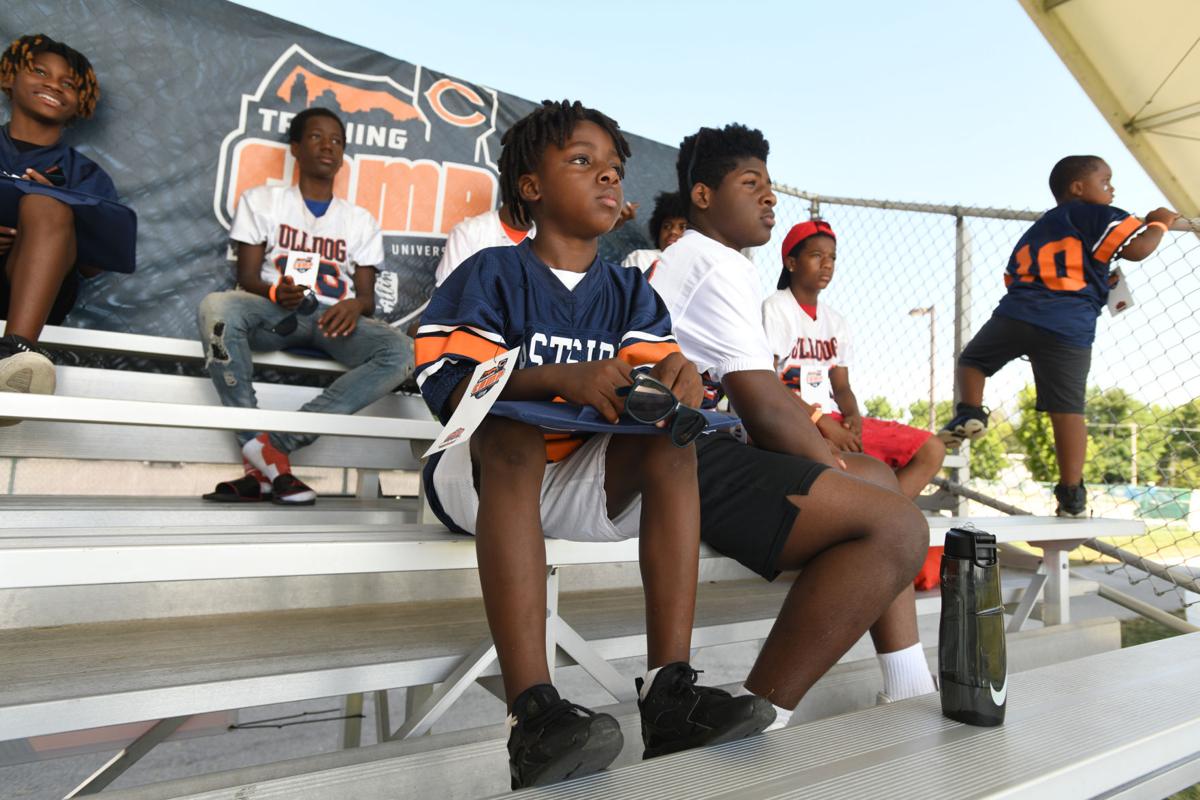 Chicago Bears quarterback Mitch Trubisky, left, signs autographs for members of the Kankakee Eastside youth football organization after Tuesday’s practice at Olivet Nazarene University. Tuesday’s practice was closed to the public as the Bears celebrated Community Day with dozens of organizations throughout the state.

Herscher Youth Football players interact with Staley the Bear on Tuesday ahead of the Bears’ Training Camp practice at Olivet Nazarene University. The camp was closed to public, but invited 700 fans at camp from 30 community groups and youth football teams to take part in Community Day.

Tuesday’s Chicago Bears training camp session was closed to the public at Olivet Nazarene University, but that didn’t stop dozens of local youth football players from seeing their heroes in action.

The Bears celebrated Community Day, with roughly 700 fans from 30 youth football programs and community organizations on hand to see the Monsters of the Midway in action.

Locally, Kankakee Eastside and Herscher’s youth programs were two of the select groups that were able to take in the action.

It was Community Day at @ChicagoBears camp today and the Herscher and Kankakee Eastside youth football programs were two of the organizations that were on hand. Here's @Mtrubisky10 signing autographs for some lucky Eastside football players. pic.twitter.com/8MxQgVe5lu

Zach Tutt, a coach at Herscher, said the opportunity for them arose after he and a few other coaches were at Halas Hall, the Bears’ headquarters in suburban Lake Forest.

“A couple of us went up to Halas Hall and did the coaches clinic through USA Football to be certified as a coach here,” Tutt said. “Through them, we networked through the program … we were fortunate enough to get 25 tickets for today.

Kankakee may just be a handful of minutes away from Olivet, but for some Eastside players, that might as well be half a world away. Coach Tywon Bender said that not all of his kids regularly have the chance to come to camp, so Tuesday provided an opportunity for some of those kids to get to see what it’s all about.

“A lot of our kids, they never have the opportunity to go Bears camp,” Bender said. “It’s good that we’re able to provide that opportunity and have them come out to actually look and see how players are in person, rather than see from behind a TV screen.”

Coaching youth football can be a difficult task. Not only are coaches teaching the game to young kids, many of whom are exposed to it for the first time at that level, but they are also connecting with them on a personal level.

For Tutt, the shared experience of watching their favorite players is something that helps him and his fellow coaches connect with their players.

“It’s a great opportunity to be able to bond with the boys as a coach,” Tutt said. “And then we get to see the camaraderie and bonding (the Bears) have as a unit and to get to teach that.”

And not only do the coaches get to bond with their players, but the players themselves get extra bonding time with one another. Although some of that bonding may come through some arguments, Bender said he loved seeing his kids becoming closer through debating the sport.

“You can just sit back and watch their arguments of who’s the best player in the NFL or who their favorite Bears player is,” Bender said. “It’s cool just seeing them build that chemistry between each other.”

And although there was some variance in both programs when they were asked who their favorite player was, as names like Mitch Trubisky and Tarik Cohen were mentioned a few times, there seemed to be a general consensus on the favorite of the favorites — linebacker Khalil Mack.

When asked after practice what it meant to him to serve as inspiration for an entire generation of young football players in the Chicago area, Mack was honored.

“That’s what I’m trying to do every day.”

The Bears held a light practice in Bourbonnais Tuesday ahead of Thursday's preseason game.

The Bears held their final two practices of the summer over the weekend.