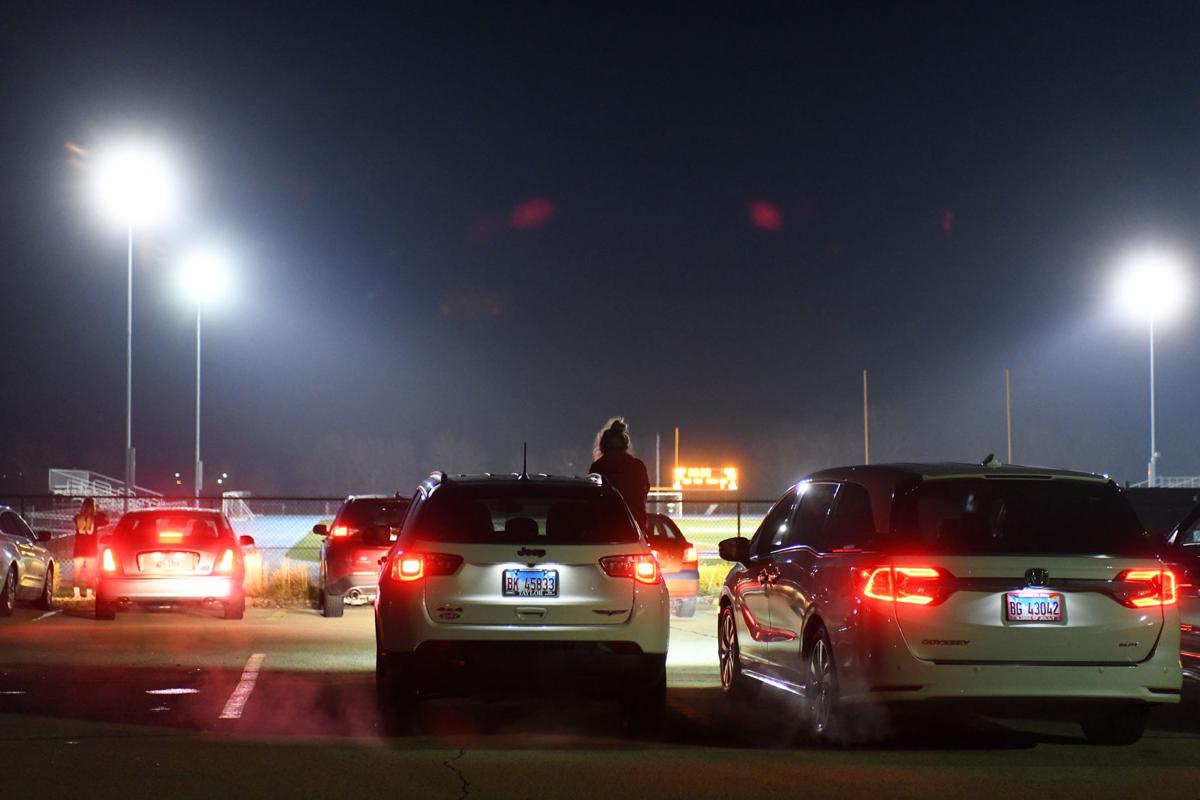 Kankakee High School senior Emmagene Draper, center, hangs out of the passenger window to take a photo of the football field and scoreboard, set to time 20:20 on Friday night. As part of the #LightsForTheFight movement started by the IHSA, Kankakee joined area high schools in lighting its football field to show support to their seniors as well as healthcare workers, first responders and all essential workers on the frontlines of the pandemic. About a dozen cars gathered for the 20-minute tribute. 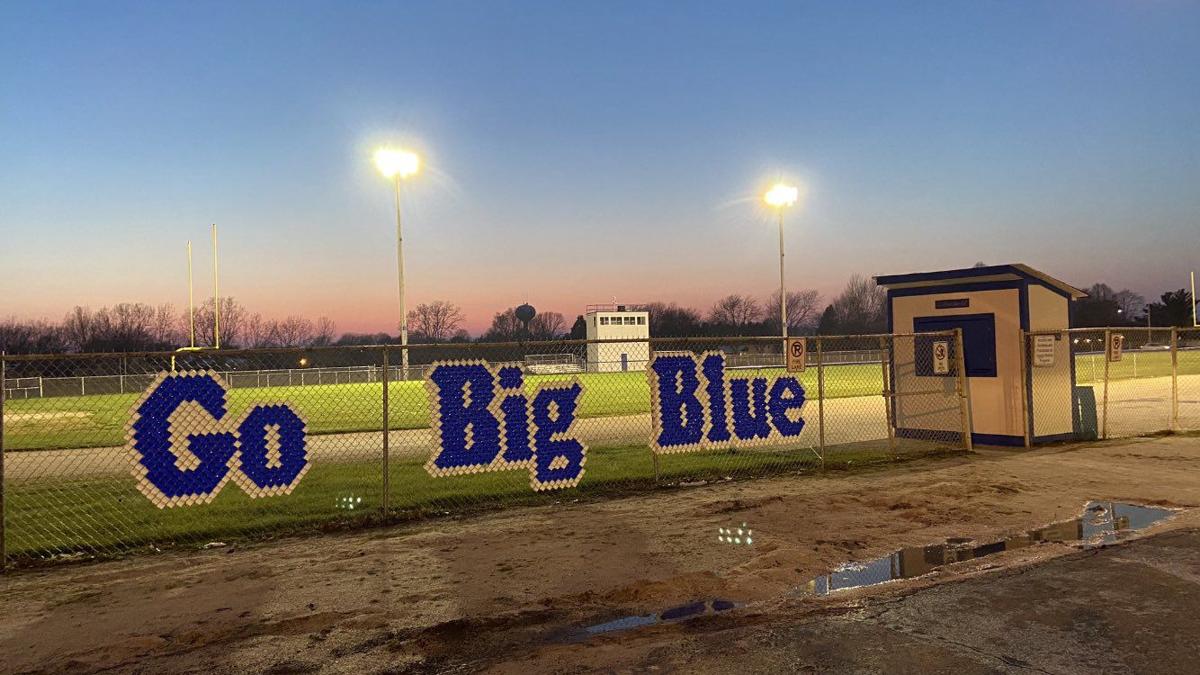 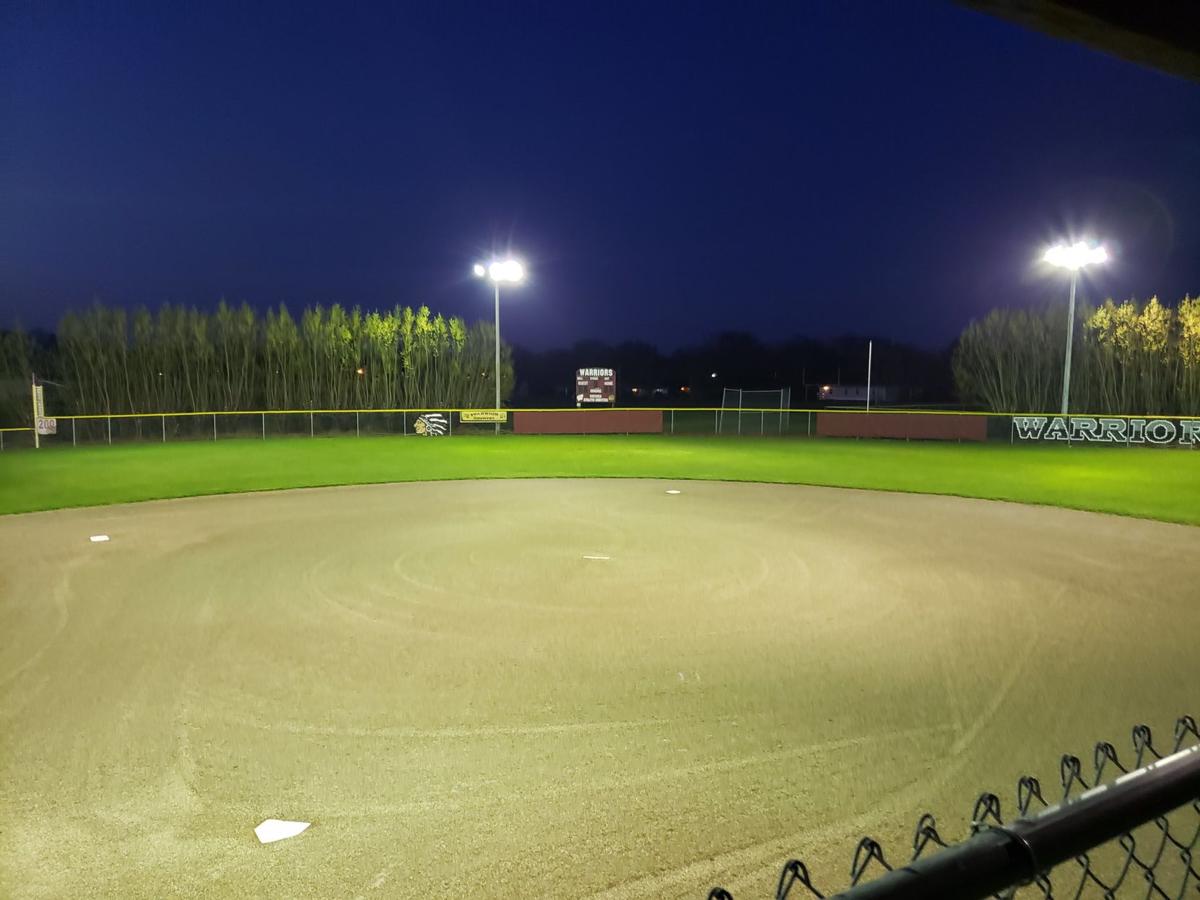 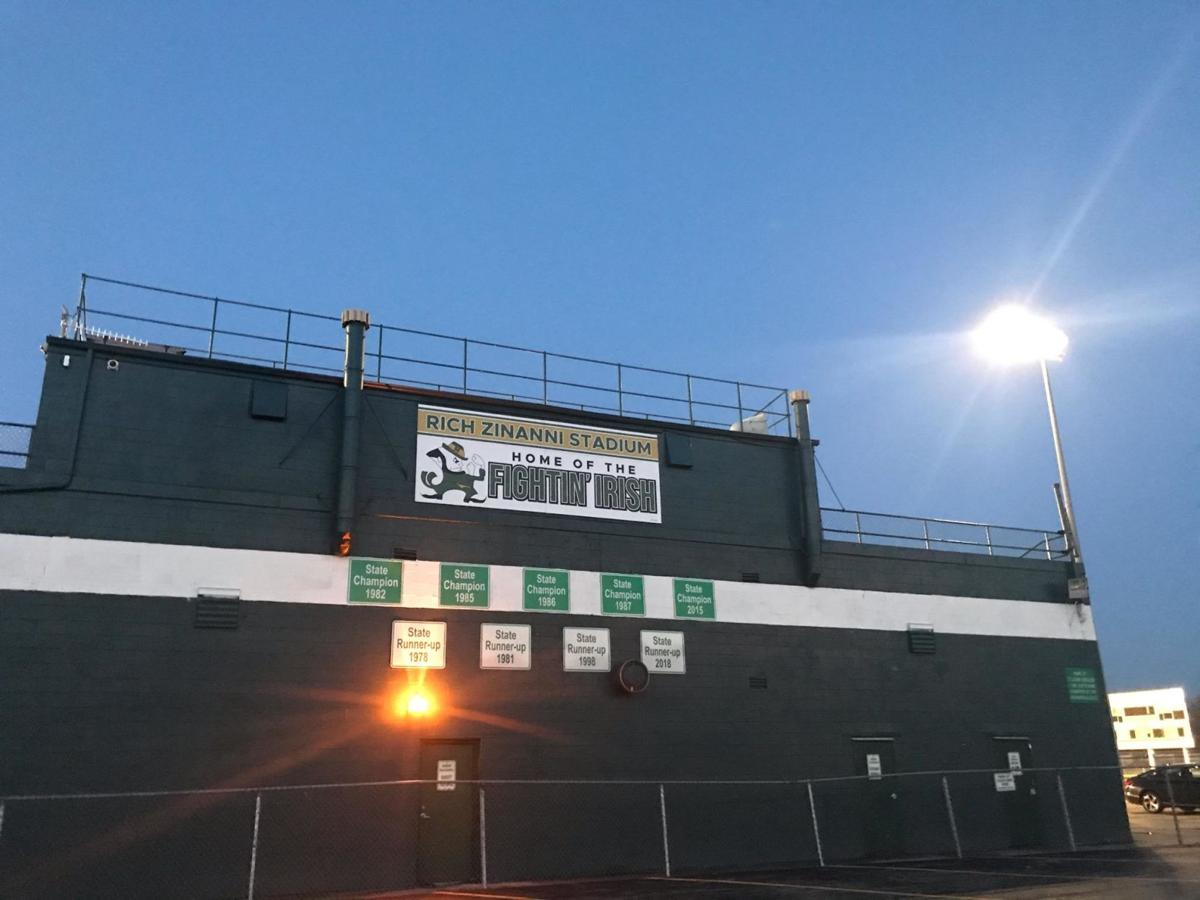 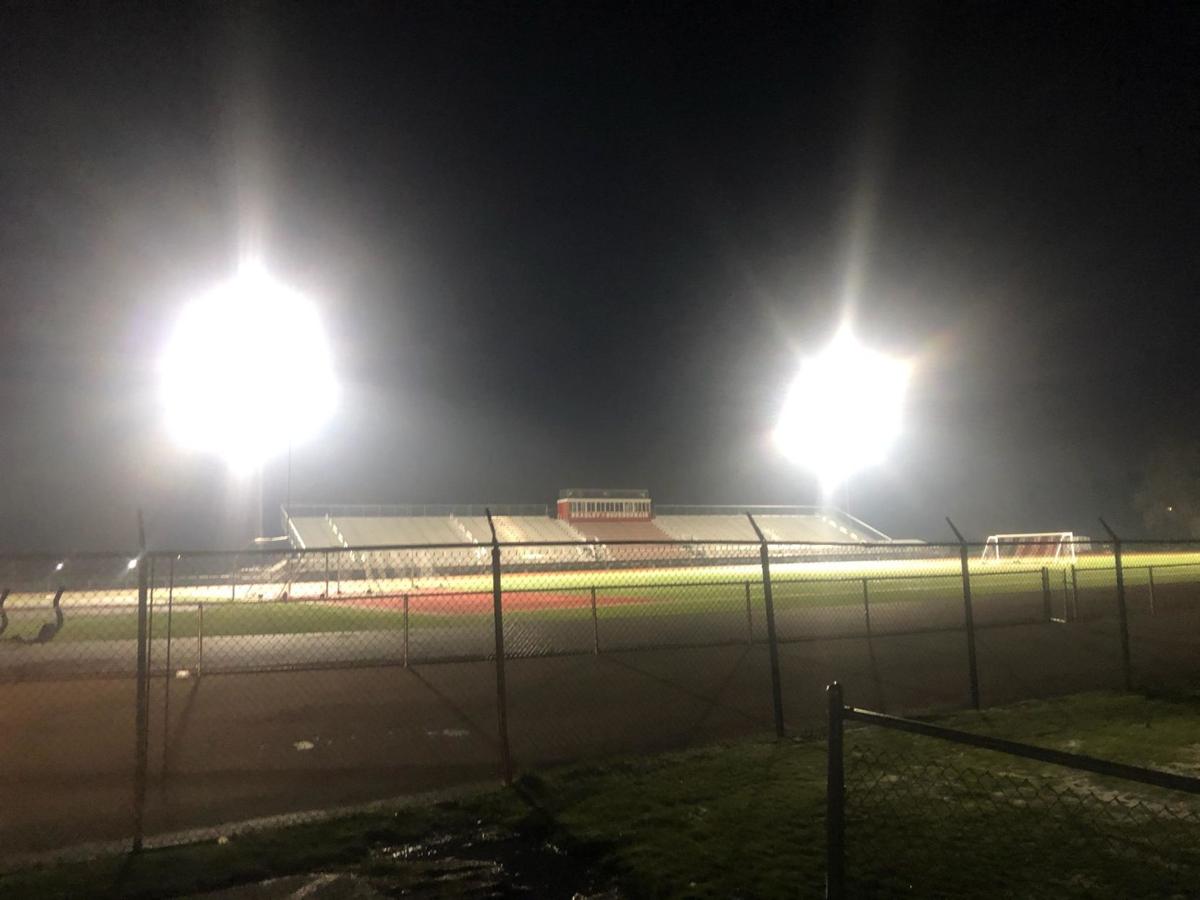 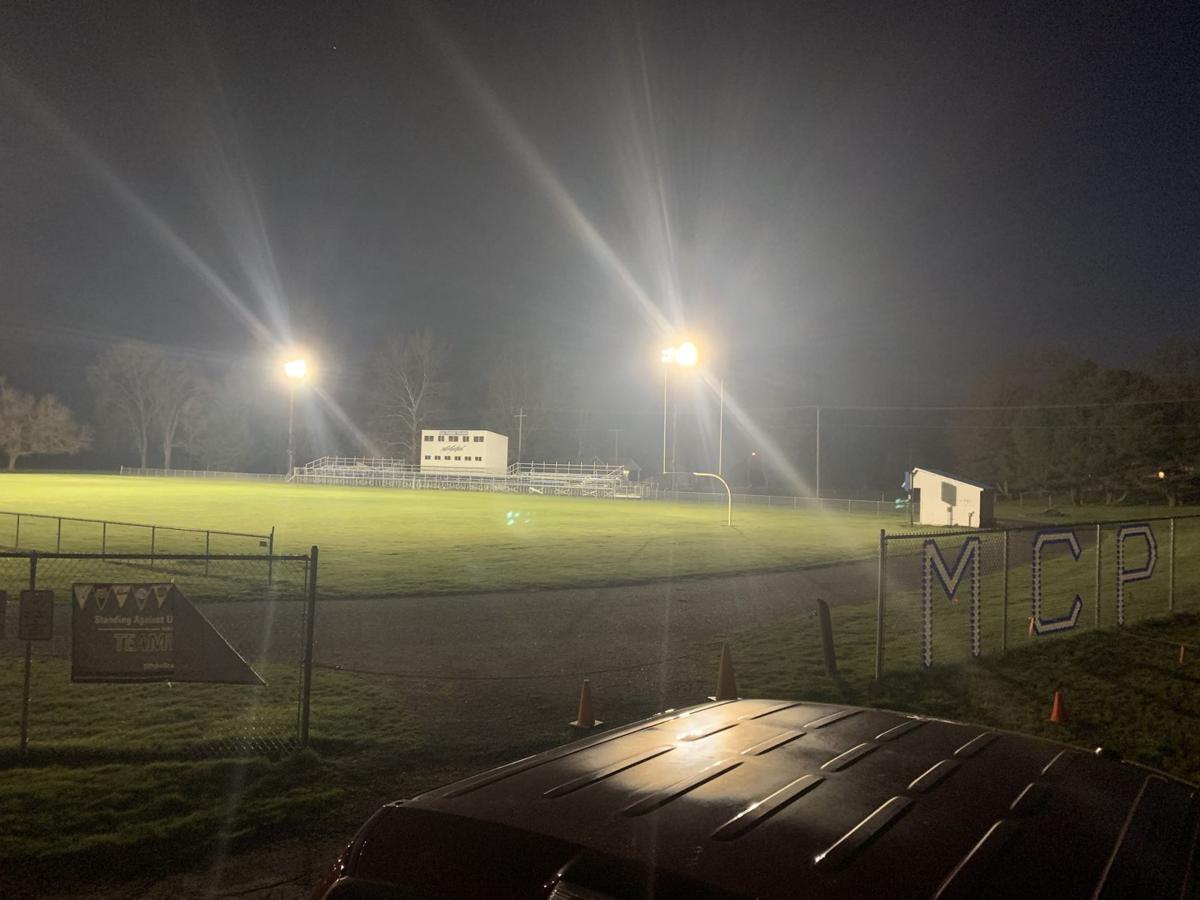 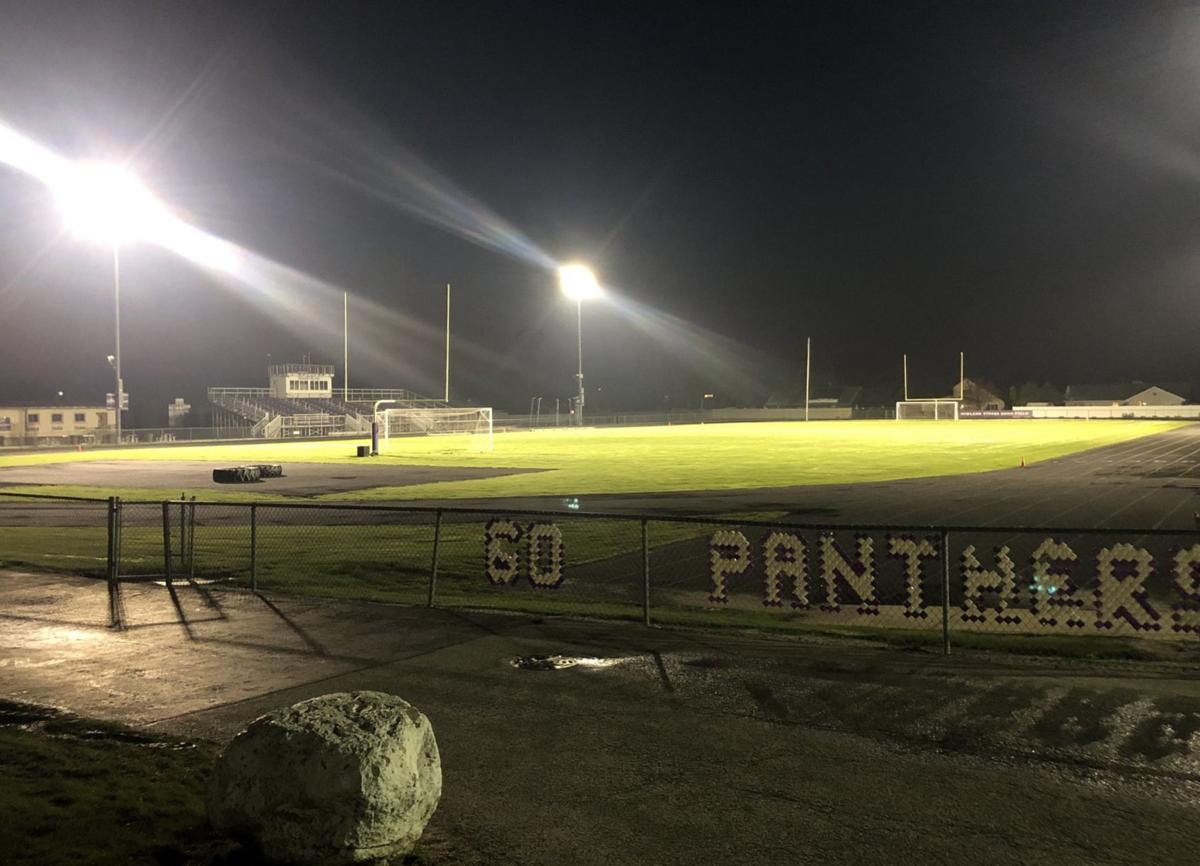 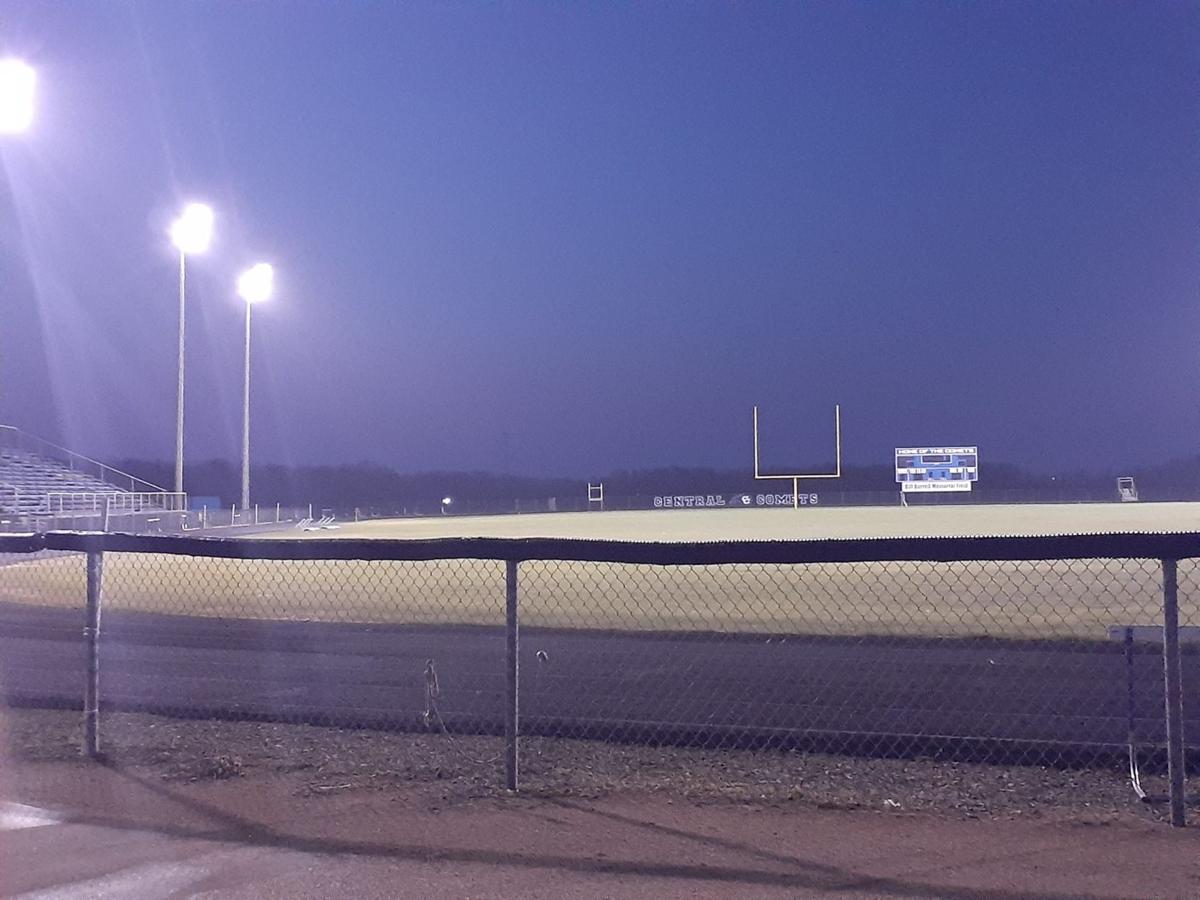 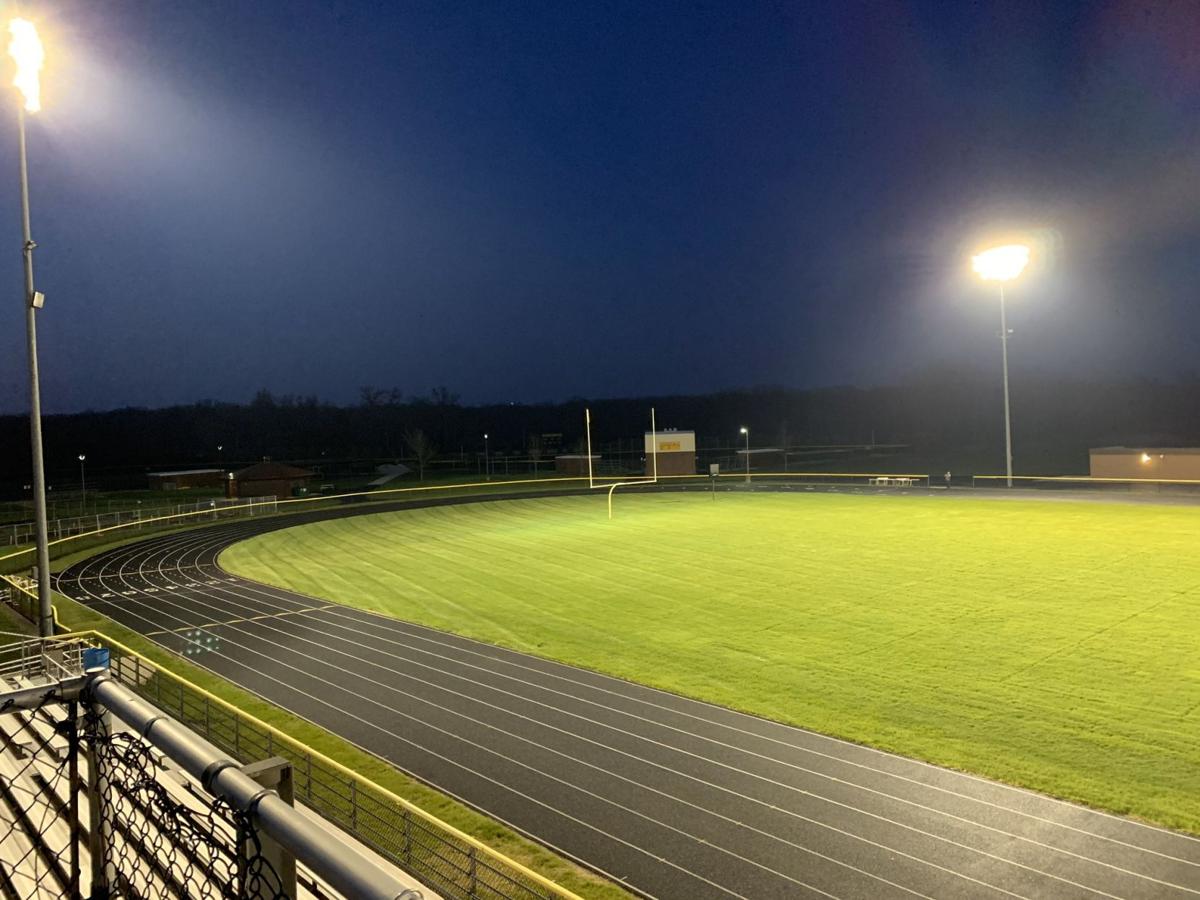 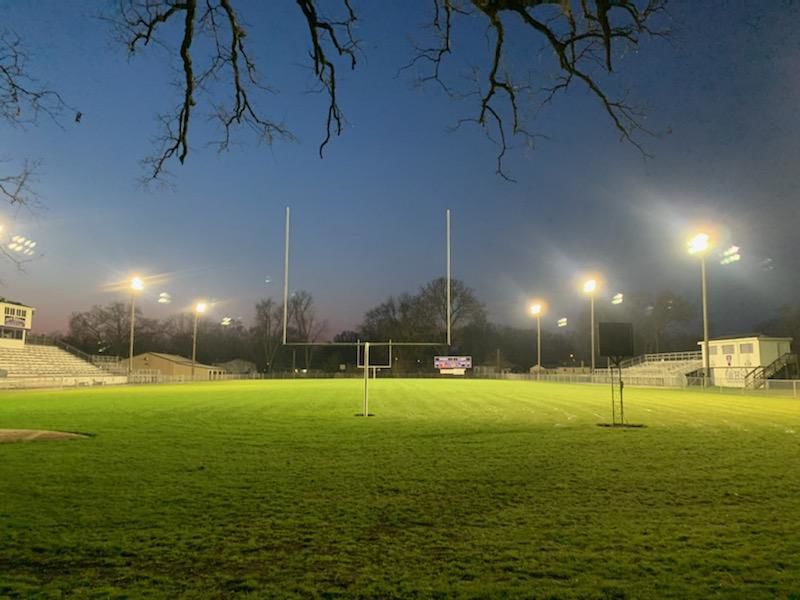 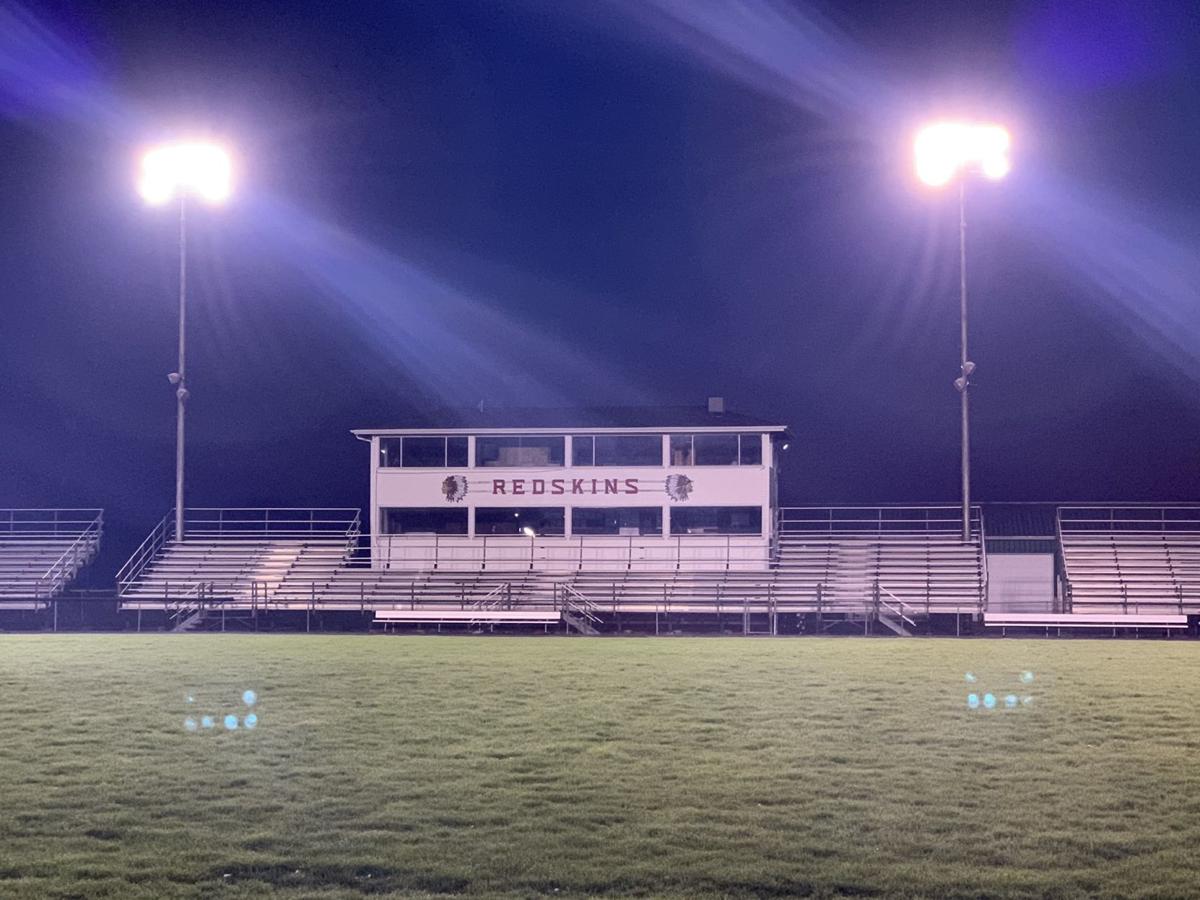 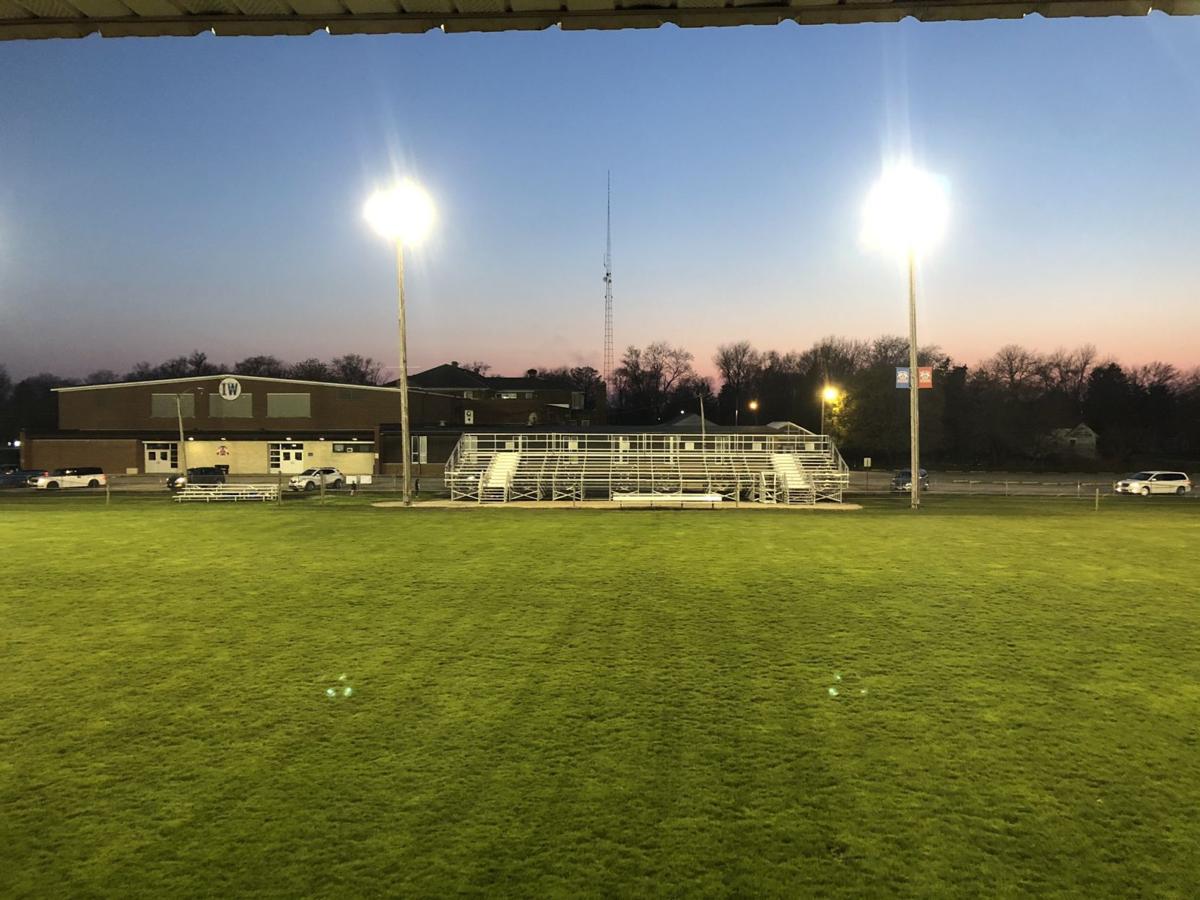 Kankakee High School senior Emmagene Draper, center, hangs out of the passenger window to take a photo of the football field and scoreboard, set to time 20:20 on Friday night. As part of the #LightsForTheFight movement started by the IHSA, Kankakee joined area high schools in lighting its football field to show support to their seniors as well as healthcare workers, first responders and all essential workers on the frontlines of the pandemic. About a dozen cars gathered for the 20-minute tribute.

Illinois Gov. J.B. Pritzker has recently announced that all Illinois schools will remain closed for the rest of the academic year, leaving students to finish the rest of school year from home. His recent decision has now only furthered the speculation that the cancelation of the athletic school year will shortly follow in the upcoming days, as the Illinois High School Association will make a decision on the season at Tuesday’s board of directors meeting.

Schools around the area, state and country have spent the past few weeks honoring hospital workers and other essential personnel by lighting up their school’s athletic fields on Friday nights, and that culminated in a statewide event, #LightsForTheFight, which took place last Friday.

The IHSA started this campaign on Twitter as a way for schools to show support for their senior students, as well as for all the healthcare workers, first responders, and all other essential workers on the frontline during this global pandemic.

The idea quickly gained support by high schools all across Illinois, with many of them who planned to participate, including several local schools.

“We had talked about it actually this past week, just to honor the seniors and there’s a hospital about a block from the high school, and all the healthcare workers,” Watseka athletic director Barry Bauer said. “And then the day after we talked about it, we saw the IHSA had posted about everyone doing it Friday.”

The small gesture of appreciation towards its athletes was something that every school could get behind. That’s why schools across the state participated from either 8:00-8:20 p.m. or 8:20-8:40 p.m. to represent the Class of 2020 through military time (20:20).

“It’s a great thing to have everybody work together and to have this initiative supported by the IHSA,” Manteno athletic director Doug Wenzel said. “It’s one way that’s comforting for everybody… and it’s a way for everyone to show their support without having to go outside.

“People are social distancing and it’s one way for us to show support for our seniors who are losing a big part of their lives… and then the bigger perspective of all the people who are doing their jobs everyday and putting their lives at risk.”

Since numerous schools across Illinois participated in the event, it’s no surprise that the majority of area schools decided to join in too. The Daily Journal was able to confirm that at least 18 of the area’s 24 schools took part. Some schools turned them on as community members drove by with honking horns, while other schools honored graduating seniors by having them sit in their parked cars, with other members of the community driving by, their horns blaring as a semblance of a substitution for graduation ceremonies that will likely never come.

Kankakee athletic director Ronnie Wilcox said that the Kays’ community reaction was so positive that they don’t plan on stopping any time soon.

“We had probably over approximately 50 cars show up to observe,” Wilcox said. “I thought it went well. And I will probably continue to do it every Friday until spring is over.”

While most schools lit the lights of their football fields, not all schools in the area have those. Schools like Grant Park, Donovan, Grace Christian and St. Anne instead lit up parts of their schools and other sports fields. Other schools, such as Watseka, lit all of their fields.

Gardner-South Wilmington did their own variation as well. The Panthers turned on their “V” light, which stands for victory, located in the main entrance above the gym as part of their efforts to participate in the #LightsForTheFight campaign.

“It’s a huge community tradition here, that V has been here a really long time,” athletic director John Engelman said. “And what it is is when one of our varsity team’s win, after the game they turn the switch on and then the V then is lit up. And then we leave it up till the next morning when we turn it off.

“The community loves it when they drive by and see it lit up.”

Don’t be surprised if schools continue this trend every Friday night for the next couple of weeks. The small gesture granted by the schools have been a nice uplift for communities across Illinois during these challenging times.