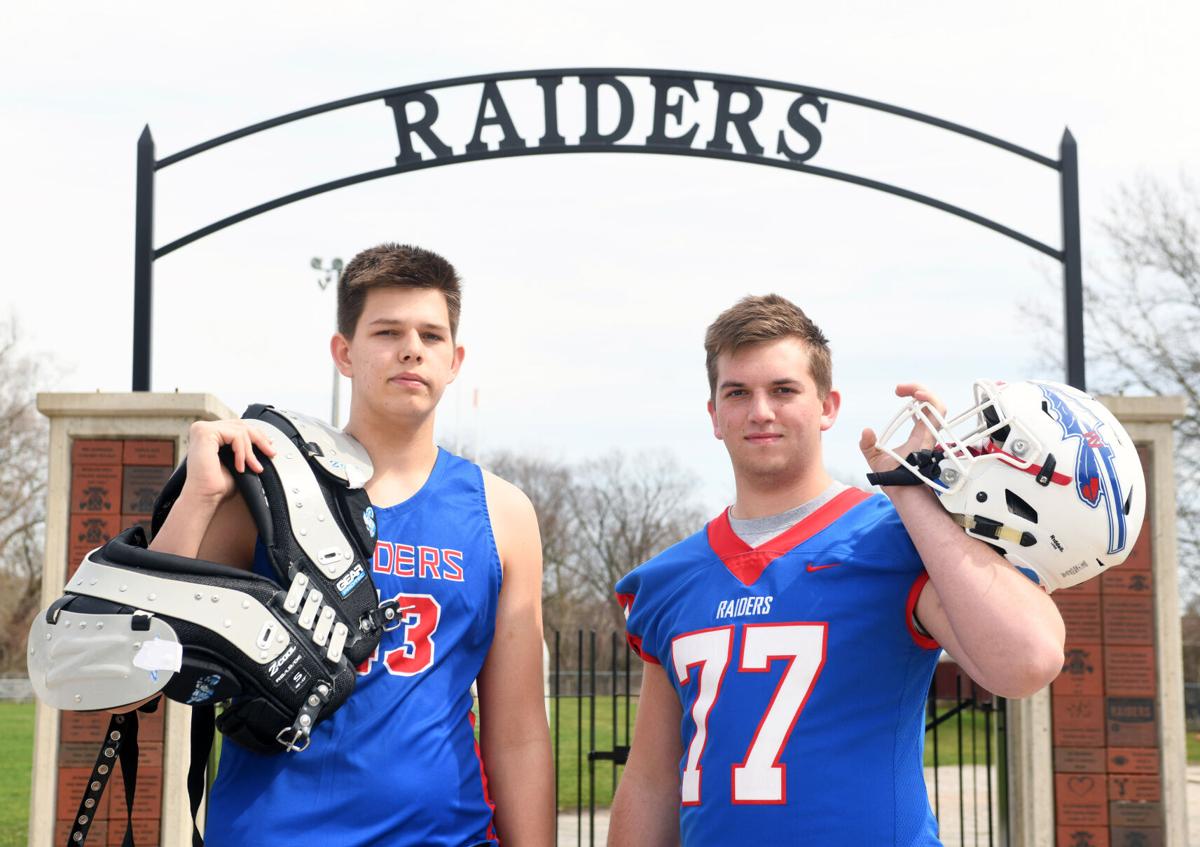 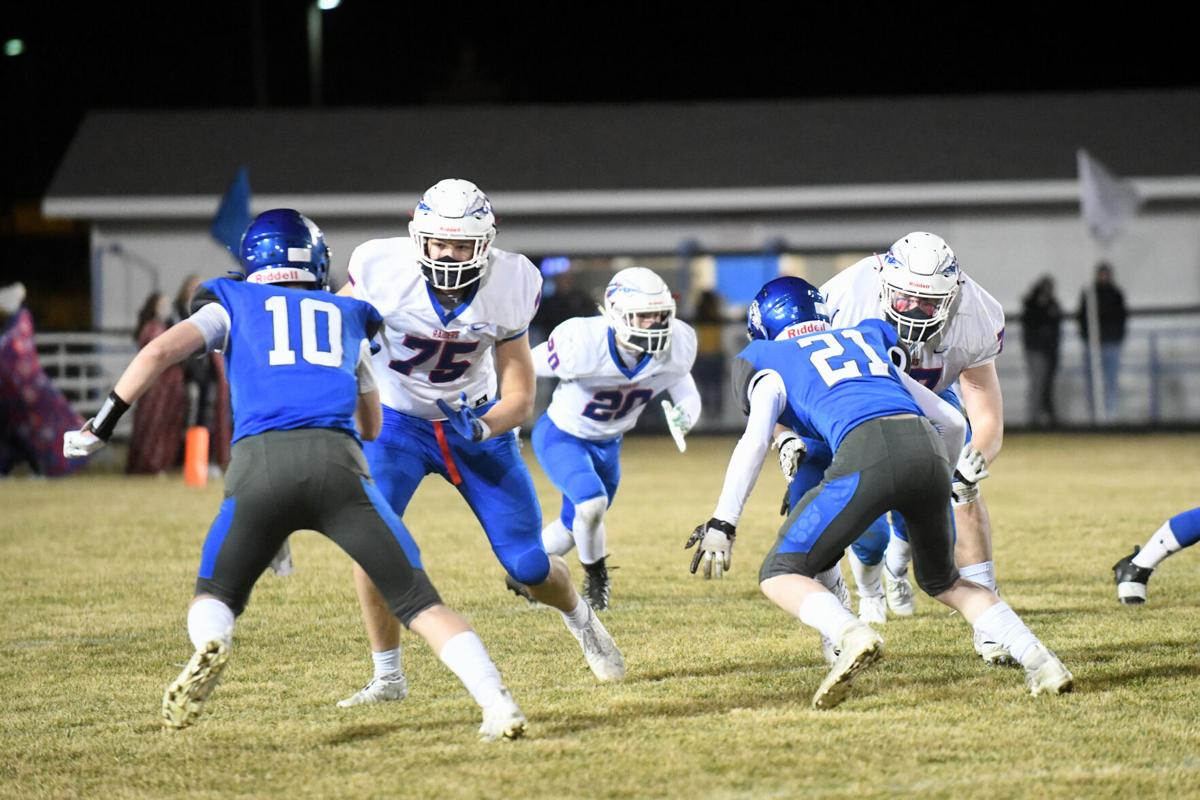 Cannon Leonard, left, and his brother Clayton look to make blocks during Iroquois West’s game against Central earlier this season.

Cannon Leonard, left, and his brother Clayton look to make blocks during Iroquois West’s game against Central earlier this season.

Iroquois West football coach Jason Thiele and boys basketball coach Zach Monk know better than anyone that supreme athletic success can be achieved at Iroquois West. As members of regional-winning basketball teams in 2002 and 2003, they were vital members of one of the program’s most successful runs. And Thiele starred on the gridiron, where he was one of the senior leader’s of the school’s 2003 state championship team.

When they look at brothers Clayton and Cannon Leonard, the alumni-turned-coaches see building blocks for both programs. Clayton, a 6-foot-4, 270-pound junior, plays right guard for the football team and is joined by younger brother Cannon, a 6-foot-9, 260-pound sophomore on the interior of the basketball team and on the right side of the Raiders’ offensive line on the gridiron at right tackle.

Clayton, who missed his sophomore year in both sports due to a torn ACL, has rebounded remarkably and recently received a scholarship offer to play offensive line at the University of Illinois, amongst a handful of other NCAA Division I schools, as he has began ascending up recruiting boards. Cannon entered his prep hoops career as a highly-regarded basketball recruit and has thus far lived up to the hype in helping the Raiders secure the Sangamon Valley Conference Tournament championship last month.

For both brothers, it’s been the premise of good, old-fashioned hard work they learned raising pigs as kids and have translated to athletics that has helped the big-framed brothers find their strides.

“Ever since I was a kid I’ve dreamed of playing Big Ten football and achieving my dreams,” Clayton said. “I want to play in the NFL and I know that’s every kid’s dream, but I want to be a high school or college coach after that.

“It’s always been my mindset that I’ve gotta bust my butt to get there and raising pigs has taught me that hard work pays off.”

Clayton tore his ACL during his freshman basketball season, playing out the year before beginning his recovery. Since then, his devotion in the gym and as a leader on both teams has caught the eyes of his coaches now, as well as potential college coaches down the line.

“When you look at him you would never know he tore his ACL,” Thiele said. “He was in here doing his rehab both with the team and on his own, watching film and helping the guys with any questions they had.

“The day he got cleared, he was back in the weight room all go, no quit, and now he’s doubled his squat and dead lift.”

For Cannon and the other players on both teams, Clayton’s dedication and work ethic is something that rubs off.

And Cannon’s been having some success himself. He began playing top-level AAU basketball as a middle schooler and while still refining his skills to fit the more modern style of basketball, he and Clayton’s play on the interior helped give space to All-SVC senior guards Jack McMillan and Ryan Tilstra as Monk’s vision for the Raiders has come to fruition on the hardwood.

“This year we had talented guards and Cannon took that third seat at given times but never let that deter him,” Monk said. “He continued to work hard, controlled the ball in the post and wasn’t afraid to speak up and let the seniors know what he saw ... and both of the kids are about winning and doing what’s best for the team.”

As winter turned to spring in this inside-out sports season and basketball season turned to football season, the brothers have moved over to the gridiron, where Thiele, who’s in his first season as coach, is hoping to move the program’s progress in a similar fashion as Monk, who has led the basketball program to the next step in his four years.

“Zach and I played basketball together and it’s great because we both come from that old school, down-and-dirty, hard work, get it done in the trenches mentality,” Thiele said.

“For me as firs- year coach seeing him and them clicking, I have to know it’s gonna start clicking for us too.

“It clicked for him this year and we got to go after them this year so I have those guys knowing they can be successful,” he added. “We haven’t gotten there with a win (the Raiders are 0-3), but we’ll get there and they know that.”

If the Raiders begin their return to relevance with the pigskin the way they have on the court, the Leonards will be a large reason why, both physically and literally, a thought that intrigues Clayton.

“I just want people to understand that I did my best to bring back IW football,” Clayton said. “I want to lay down a path for kids because nobody ever comes down to IW for football, but I feel like after this people will start to look … and we’re a really young team which is the best part.”

There’s little doubt the brothers will leave a long-lasting legacy in Gilman. And with the tools academically, with both brothers being honors students, as well as athletically, the possibilities are endless as to what college towns the pair may leave their marks on after.

“I’ve always played both sports and always been pretty decent at both of them but) it wasn’t until this year that I realized I had opportunities to play at the next level for football,” Cannon said. “I’ve always dreamed of playing college sports for basketball or football but seeing that come to fruition for both sports is really opening my eyes to see where I can go.”

Mason Schweizer previews the rest of this week's slate.

FOOTBALL: Central's offense proves too much for Iroquois West

Central put on an offensive clinic in its 42-0 win over Iroquois West in the opening week of the IHSA football season.