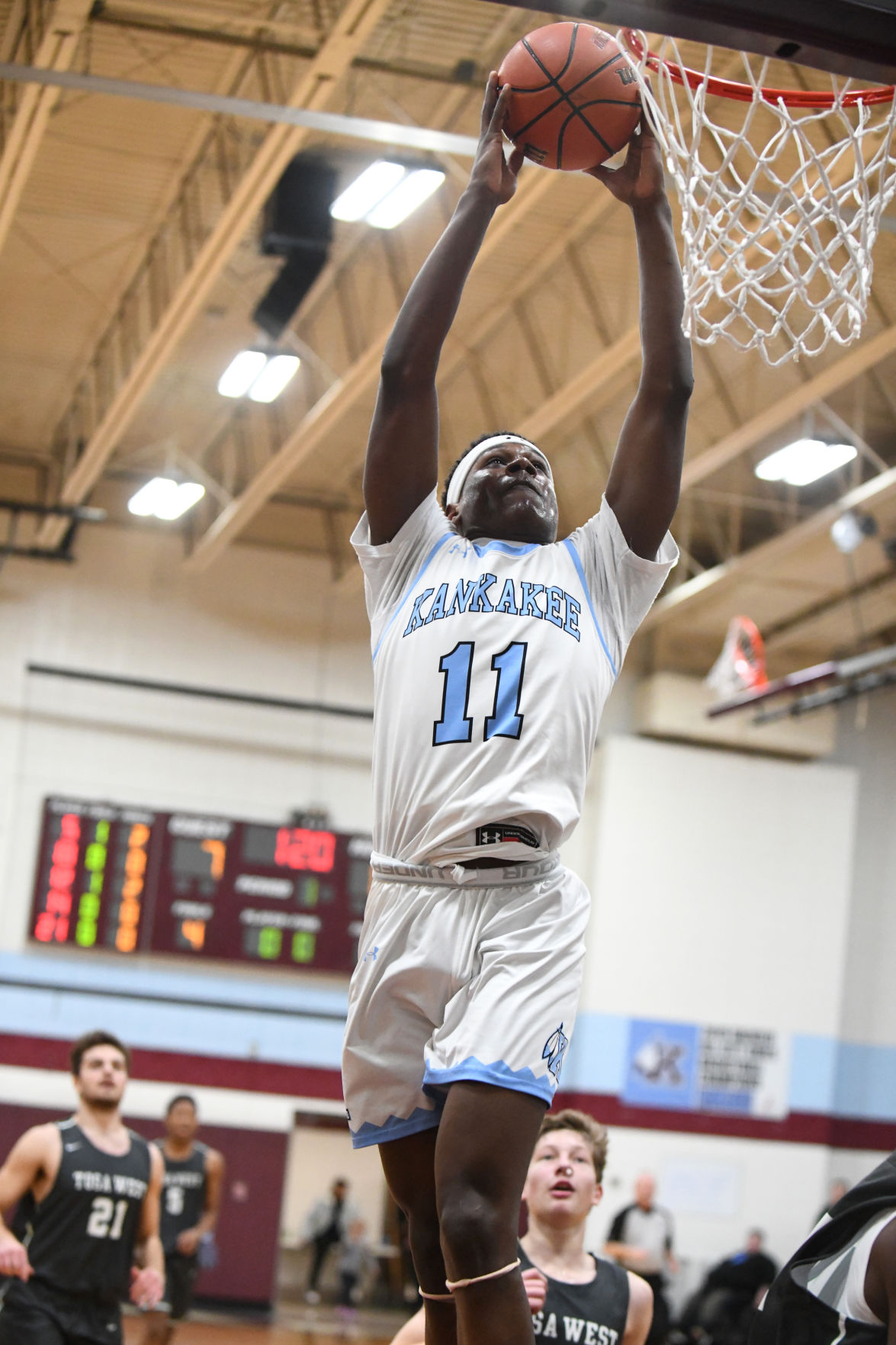 Kankakee’s AJ Storr reaches for a dunk during a game in the 2019 Kankakee Holiday Tournament in December. Storr will play his senior season at Bishop Gorman High School in Las Vegas, one of the most successful high school basketball programs in the country. 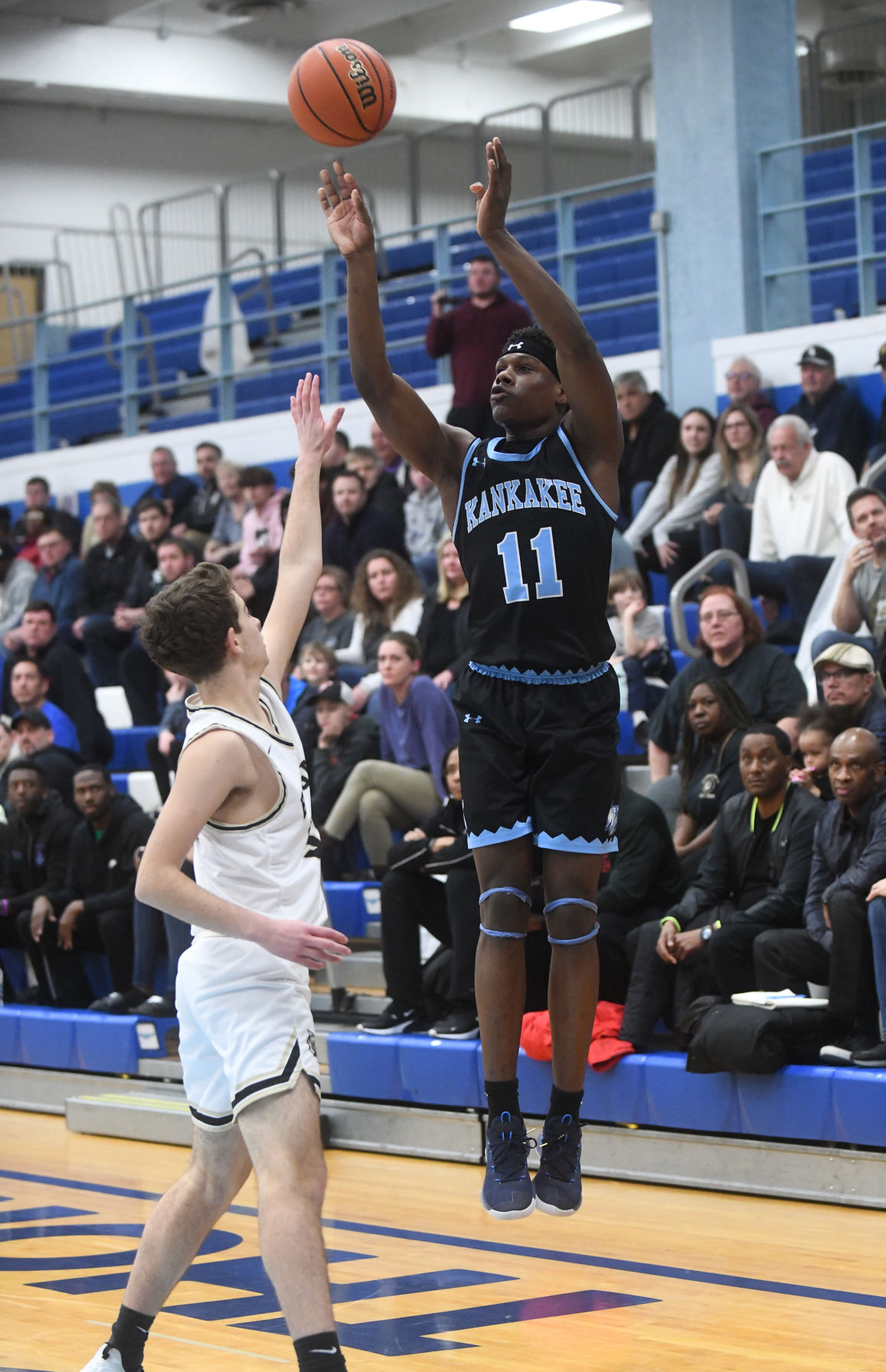 Kankakee’s AJ Storr shoots over Oak Forest’s Eli Lipsett during the Kays’ 72-51 victory in the IHSA Class 3A Thornridge Sectional semifinal last season. Storr will play his senior season at Bishop Gorman High School in Las Vegas, one of the most prestigious basketball programs in the country.

Kankakee’s AJ Storr reaches for a dunk during a game in the 2019 Kankakee Holiday Tournament in December. Storr will play his senior season at Bishop Gorman High School in Las Vegas, one of the most successful high school basketball programs in the country.

Kankakee’s AJ Storr shoots over Oak Forest’s Eli Lipsett during the Kays’ 72-51 victory in the IHSA Class 3A Thornridge Sectional semifinal last season. Storr will play his senior season at Bishop Gorman High School in Las Vegas, one of the most prestigious basketball programs in the country.

AJ Storr made one of the biggest leaps in the area’s basketball scene between 2018-19 and 2019-20. That momentum continued into the summer, as the lengthy swingman has turned heads throughout the amateur circuit.

As Storr continues to develop and make a name for himself, the final stages of his prep career will be acted out in Las Vegas.

Storr will be transferring to Bishop Gorman High School in Las Vegas, a powerhouse program in the world of prep basketball. The Gaels tied a national record last year, when they won their ninth state basketball title in a row, and consistently find themselves ranked highly in all sorts of national prep basketball rankings.

“It’s great to be a part of this school,” Storr said of his new home.

Ranked No. 5 in the country, they won’t be too bad to play for.

“I’m looking forward to the season, and hopefully it starts right away.”

Storr, who is already in Las Vegas, became aware of the possibility when his father, Ambrozino Storr, moved there. His father is a personal friend of Gorman coach Grant Rice, who told Storr there was a spot for him after evaluating his film.

Although the once-in-a-lifetime opportunity came about, it by no means was an easy decision for Storr to leave behind his teammates and coaches at Kankakee, as well as his mother, Annette Brandy, who works in the district and served as the interim girls basketball coach last season.

“It was a hard decision,” Storr said. “But I knew coming out here would better my future and give me a better chance of accomplishing my goals.”

Kays coach Chris Pickett said over some conversations with Brandy, he knew there was a possibility Storr could be headed for “bigger and better” opportunities, with the opportunity out west coming as a result of hard work.

“AJ’s been aware of what he’s needed to get better on, and he’s put that work in,” Pickett said. “There’s still a lot of room for growth because he’s just 16, so hopefully, he’ll go out there and improve on the things he’ll need for college ball.”

Storr, who is already in Las Vegas and led Gorman in scoring in a tournament during the weekend, said the lack of clarity on basketball being played this season because of the COVID-19 pandemic played a role in his decision.

“It had a big effect,” Storr said. “What’s the point of being in Illinois if I can’t play basketball if I can go to a different state and play right away?”

As he continues to fill out a frame that stands at 6-foot-6 and counting, Storr said he’s been working on upper and lower body strength, as well as counter moves and a pull-up jumper, with the hope of developing a game worthy of scholarship offers in the Big Ten and other Power Five Conferences.

As for the Kays, who were set to return both Storr and classmate Rashard Harris as a pair of All-Area selections, not only will Harris shoulder more of the load but so will some players who already have seen success at the lower levels of high school basketball at Kankakee.

“Fortunately, our system is organized to have guys develop and experience success on the lower level and that typically translates to varsity for us,” Pickett said. “Willie Strickland, Kamar Whittaker and Tomele Staples all did very well when they were down there. It’s their turns now.

“Rashard Harris will drive the team, and we will be fine.”