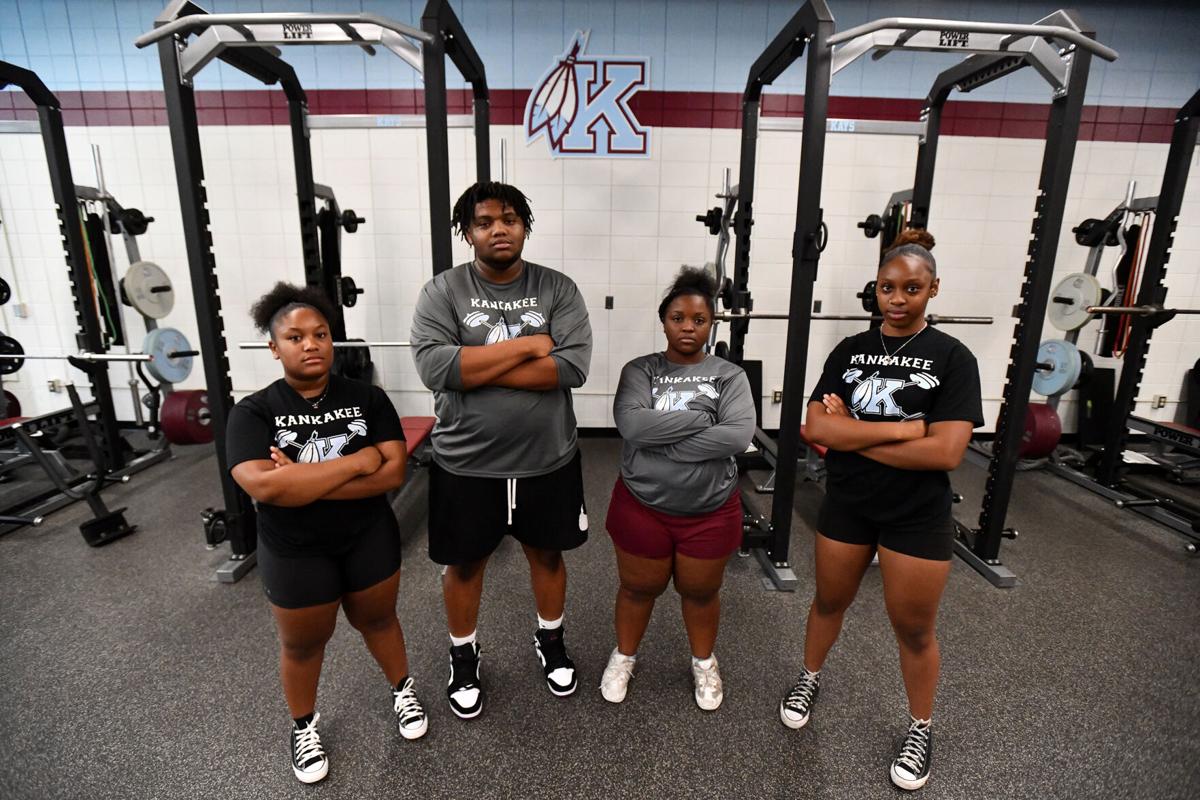 Kankakee powerlifters, from left, junior Jerika Harris, junior Steven Young, sophomore Sa’Mya McIntosh and senior Ke’Ayla Dunlap pose in the weightroom Tuesday during a summer workout. All four athletes competed in the 2021 state competition, with Harris and Young placing first in their class, McIntosh placing second and Dunlap hitting a deadlift 20 pounds away from the school record. 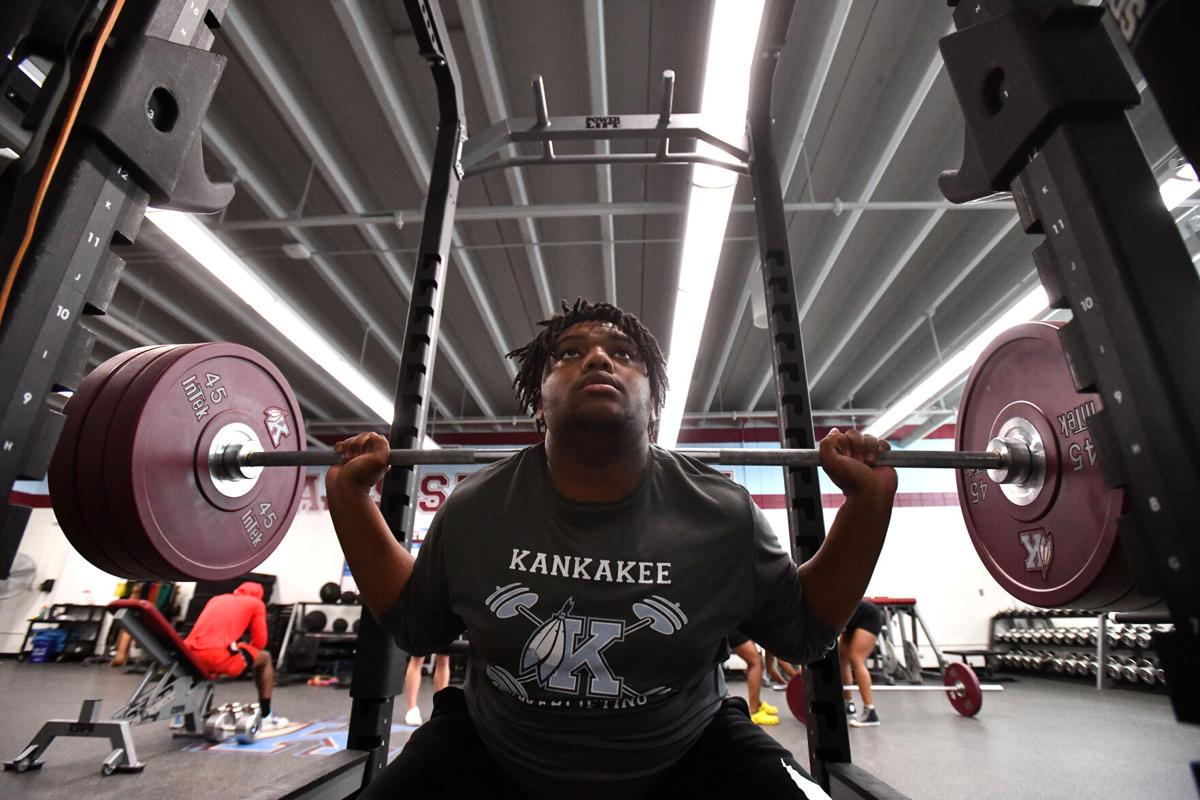 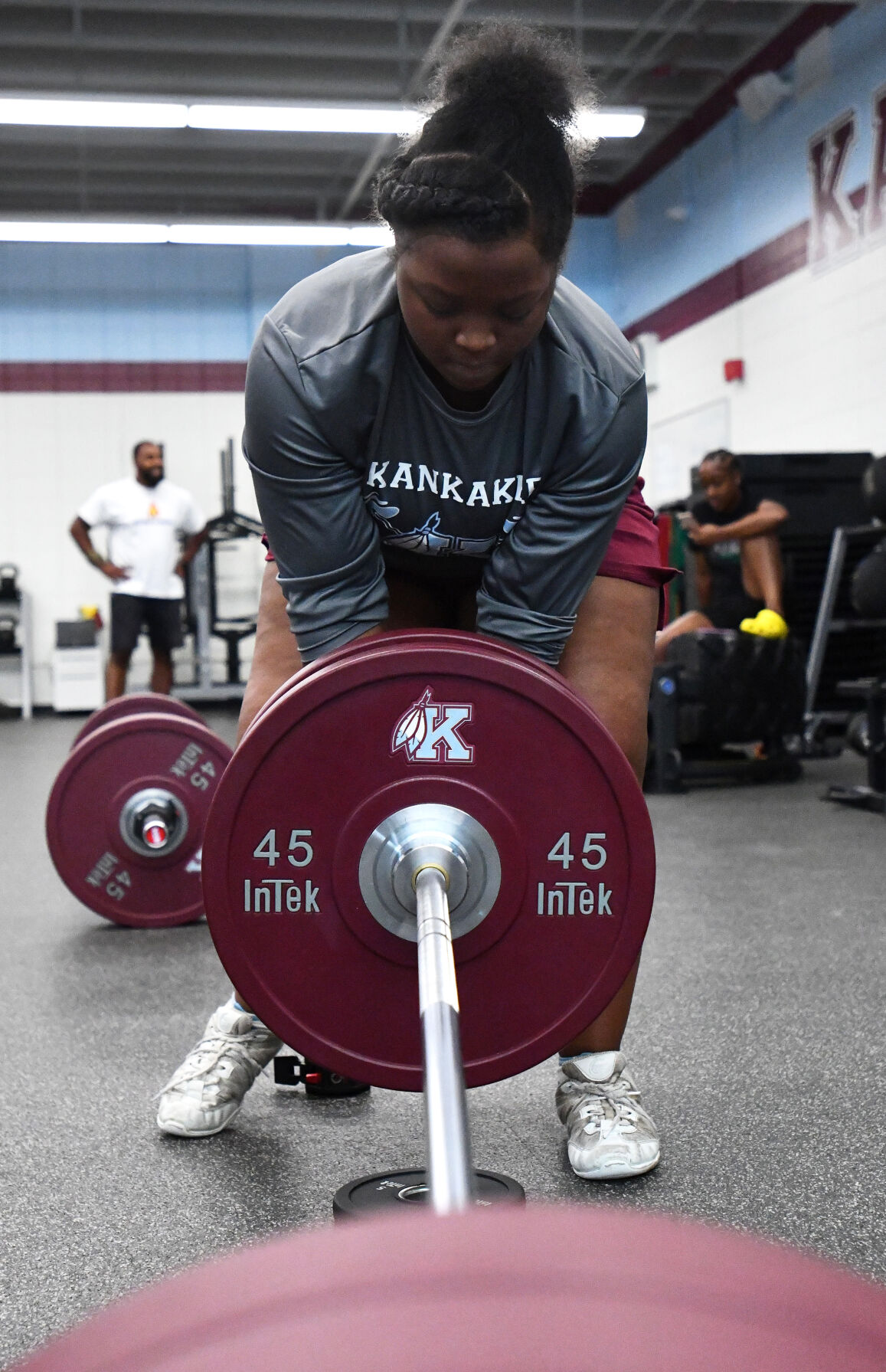 Kankakee powerlifter sophomore Sa’Mya McIntosh loads the barbell for deadlifts Tuesday during a summer workout. McIntosh placed second in her class at the 2021 state competition. 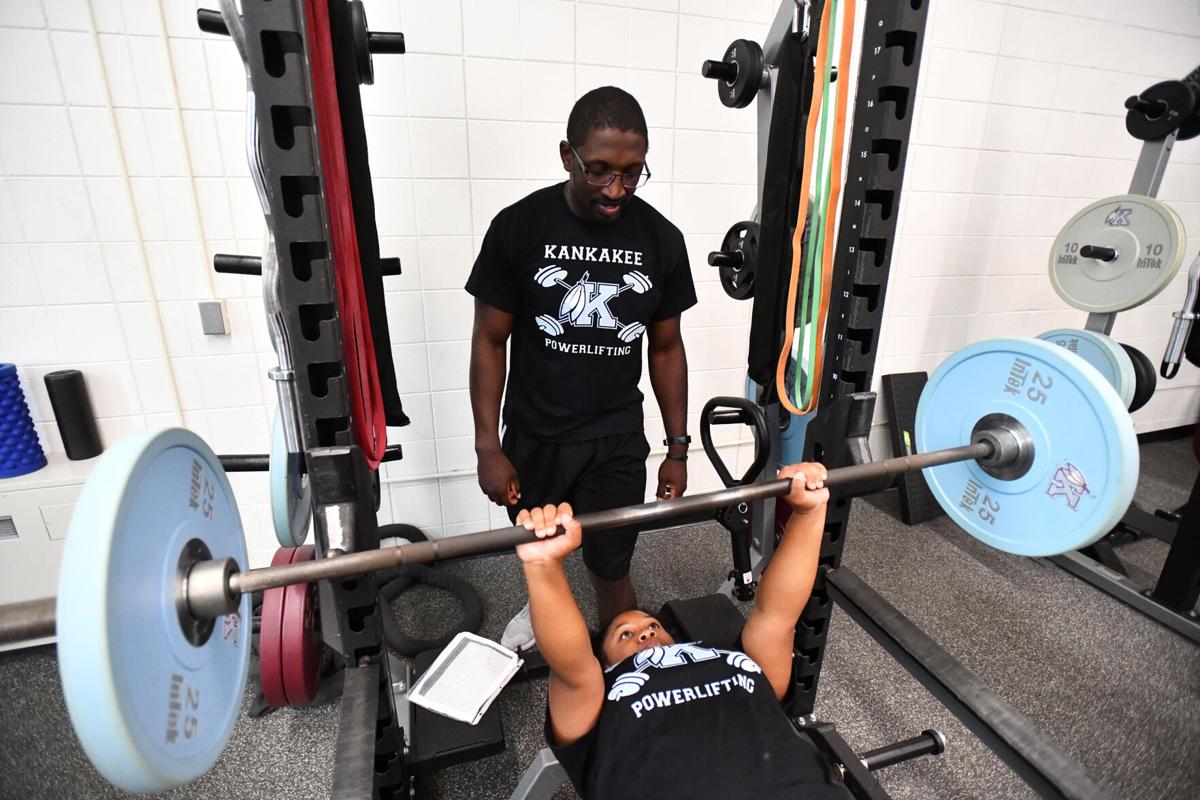 Kankakee powerlifting coach Brandon Brown prepares to spot junior Jerika Harris as she bench presses Tuesday during a summer workout. Harris placed first in her class at the 2021 state competition. 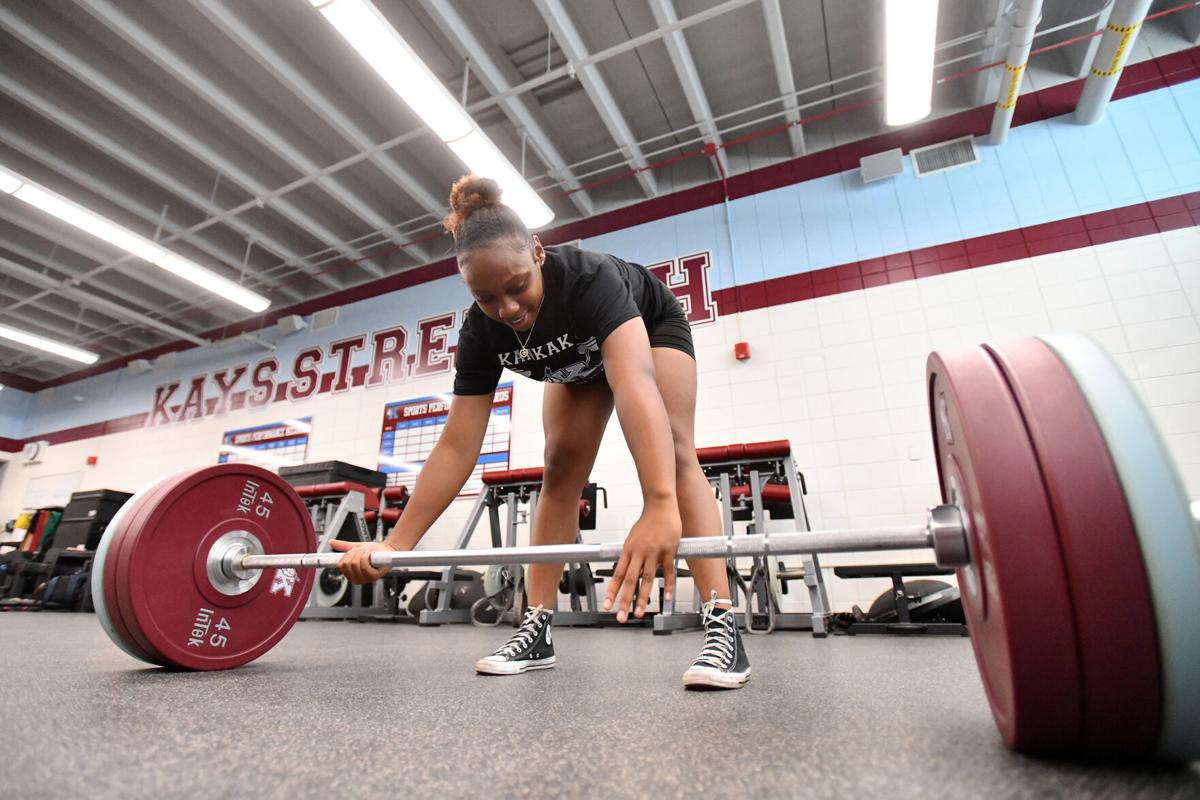 Kankakee powerlifter senior Ke’Ayla Dunlap prepares for a deadlift Tuesday during a summer workout. Dunlap competed at the 2021 state competition, just missing the podium with a 290-pound deadlift, which is 20 pounds away from the school record. READ MORE.

Kankakee powerlifters, from left, junior Jerika Harris, junior Steven Young, sophomore Sa’Mya McIntosh and senior Ke’Ayla Dunlap pose in the weightroom Tuesday during a summer workout. All four athletes competed in the 2021 state competition, with Harris and Young placing first in their class, McIntosh placing second and Dunlap hitting a deadlift 20 pounds away from the school record.

Kankakee powerlifter sophomore Sa’Mya McIntosh loads the barbell for deadlifts Tuesday during a summer workout. McIntosh placed second in her class at the 2021 state competition.

Kankakee powerlifting coach Brandon Brown prepares to spot junior Jerika Harris as she bench presses Tuesday during a summer workout. Harris placed first in her class at the 2021 state competition.

Kankakee powerlifter senior Ke’Ayla Dunlap prepares for a deadlift Tuesday during a summer workout. Dunlap competed at the 2021 state competition, just missing the podium with a 290-pound deadlift, which is 20 pounds away from the school record. READ MORE.

Three years ago Kankakee high school hired David Emery to become its head strength and conditioning coach and not too long after the Kays hired Brandon Brown, who started the school’s first powerlifting team in 2020.

Those decisions were made in order to further progress the skills of Kankakee’s student-athletes by helping them increase their strength and quickness, which has only seen major improvements to the Kays’ athletic programs over the past few years.

“I’m the director of sports performance and so I oversee all of them and I mentor and advise and research how to continually evolve the department.”

Between the guidance from Emery and Brown and the overwhelming support from athletic director Ronnie Wilcox, Kankakee has slowly over the past few years turned its athletic programs into a similar setting as one would see in a college. From new facilities to newly hired experienced coaches, the Kays have become somewhat of a powerlifting powerhouse in the Southland Athletic Conference as of late by creating a culture Emery drew from experience coaching at six different universities to cultivate.

“If you’re a college athlete then you’re going to be around your strength and conditioning coach just as much or more than your head coach,” Emery said. “We envision ourselves like a college setting and that’s kind of the direction we went with and so far it’s working.”

Kankakee’s powerlifting team featured just five student-athletes this past season after having nine in its opening season. But despite not having huge numbers, the Kays put up major results as three of their athletes — Steven Young, Jerika Harris and SaMya McIntosh — became state placers at the Illinois High School Powerlifting Association State Meet.

“That was Jerika and SaMya’s first year competing in powerlifting and Steve’s second year,” Brown said. “He placed first in regionals the year before and increased his max numbers by over 100 pounds in his squat, 60 pounds in bench and 120 pounds in his deadlift.”

Kays Young says joining the squad was a no brainer

Now a junior, Steven Young has always had a strong passion for lifting in the weight room. Ever since he was a young child Young took to the weights, but once he got to Kankakee high school he saw he needed to get bigger in order to excel on the gridiron as an offensive lineman.

“I’ve always been into weight-lifting ever since I was a kid,” Young said. “Once I got to high school I felt I was kind of weak and then going into the end of my freshman year I started putting on some muscle and coach Brown started the powerlifting team which made me want to join.”

Unlike most members of the squad, Young has some serious goals when its comes to powerlifting. He loves the feeling when he sees an increase in his results, which is why the 6-foot-2 305-pounder has plans to shatter all of the Kays’ record books after securing a first-place finish in IHSPLA State this past year in the 308-pound division.

“My favorite part about this program is my ability to get stronger,” Young said. “I’m coming for all the school records.”

As great as the team has helped him with his strength and confidence, Young has also seen his skills on the football field rise as well.

“This has definitely helped me for football in regards to leverage, working my hands and all that kind of stuff,” Young said.

When SaMya McIntosh first joined coach Brown’s powerlifting team she couldn’t even bench press a standard bar. Only a year into the program, McIntosh has already seen herself make drastic improvements, including being able to do multiple reps of weight she had no business being able to lift just 365 days ago.

“When I first started I couldn’t even bench press 25 pounds,” McIntosh said. “Now I can do a couple reps and so I’ve made a lot of improvements.”

The first-year powerlifter got her chance to test out her skills in the IHSPLA State powerlifting competition this past year, where she wound up taking second-place in her respective weight class.

“I was sad I took second...but I was very happy for it to be my first competition and take second at the same time,” McIntosh said.

Along with being a newly powerlifter, McIntosh also cheers for the Kays during the school year. And so being a baser for the squad, she has to do a lot of the heavy lifting for her flyers. As a result of joining coach Brown’s program, McIntosh has slowly seen herself drastically improve her strength, which has only benefited both her own well-being and the cheer squad.

“I cheer as well so I think this helps me as a baser,” McIntosh said. “It helps me lift my flyers and get better stunts done. So powerlifting has helped me with a lot of things.”

This past year in her sophomore season Jerika Harris opted to join Kankakee’s powerlifting program due to her strong passion for working out.

“I’ve seen my strength increase a lot since joining the program,” Harris said. “Coach Brown has pushed us to want to do more when we want to be done. My strength has increased a lot since my freshman year.””

Much like McIntosh, Harris too has seen the increased results from her lifts which has translated onto the volleyball court for the Kays’ volleyball sqaud.

“I’m a libero in volleyball and so I think joining powerlifting has made me hustle more and be more aggressive as a libero,” Harris said.

Harris’ work ethic in the gym was already well-known within the Kankakee athletic department, but it was also well recognized in the IHSPLA State meet, where she wound up taking first-place this past year.

“It was really exciting to get first place at IHSPLA state,” Harris said. “I was really shocked.”

Harris will look to repeat as a state champion next year when she begins her junior campaign.

From the football field all the way down to the cheerleading squad, Kankakee has seen its athletes make dramatic improvements. Practicing three times a week where they focus on squat, bench and deadlifts the Kays have been able to provide another possible avenue to earn college scholarships.

“I wanted to give the kids another opportunity to compete,” Brown said. “And if they want the opportunity to go to college for powerlifting I want to show them that that’s also an option.”

Although Brown’s original thought was to start the powerlifting program for students who didn’t necessarily play other sports, he’s still seen powerlifting as an opportunity for those that do to see a rise in their competition level and team building skills.

“This will help the traditional sport athletes in a sense of the competition factor, but then also another conversation piece to build camaraderie amongst the team,” Brown said. “I think ultimately it inspires families to workout together which would in turn get the whole Kankakee community involved.”