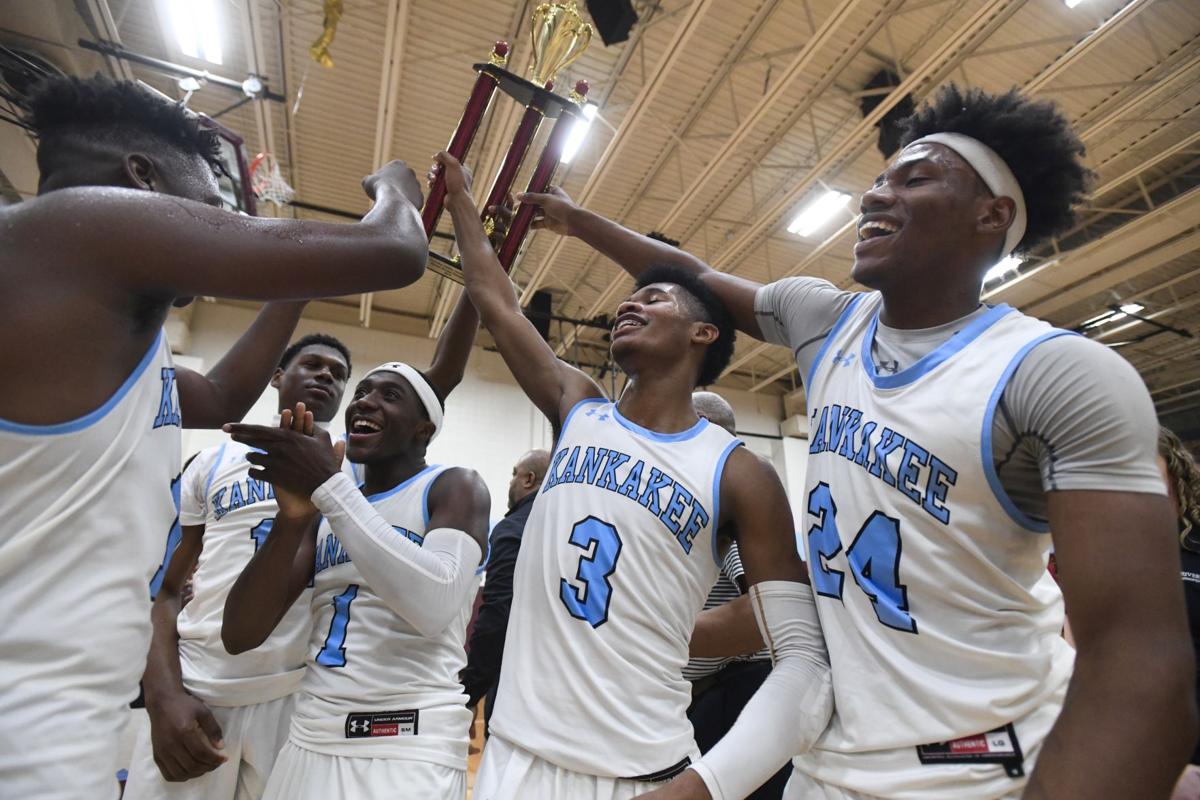 Kankakee players celebrate their 45-38 victory against Wauwatosa West in the maroon division championship of the Kankakee Holiday Tournament last year. This is the first year since the tournament began in 1950 that there will be no games. 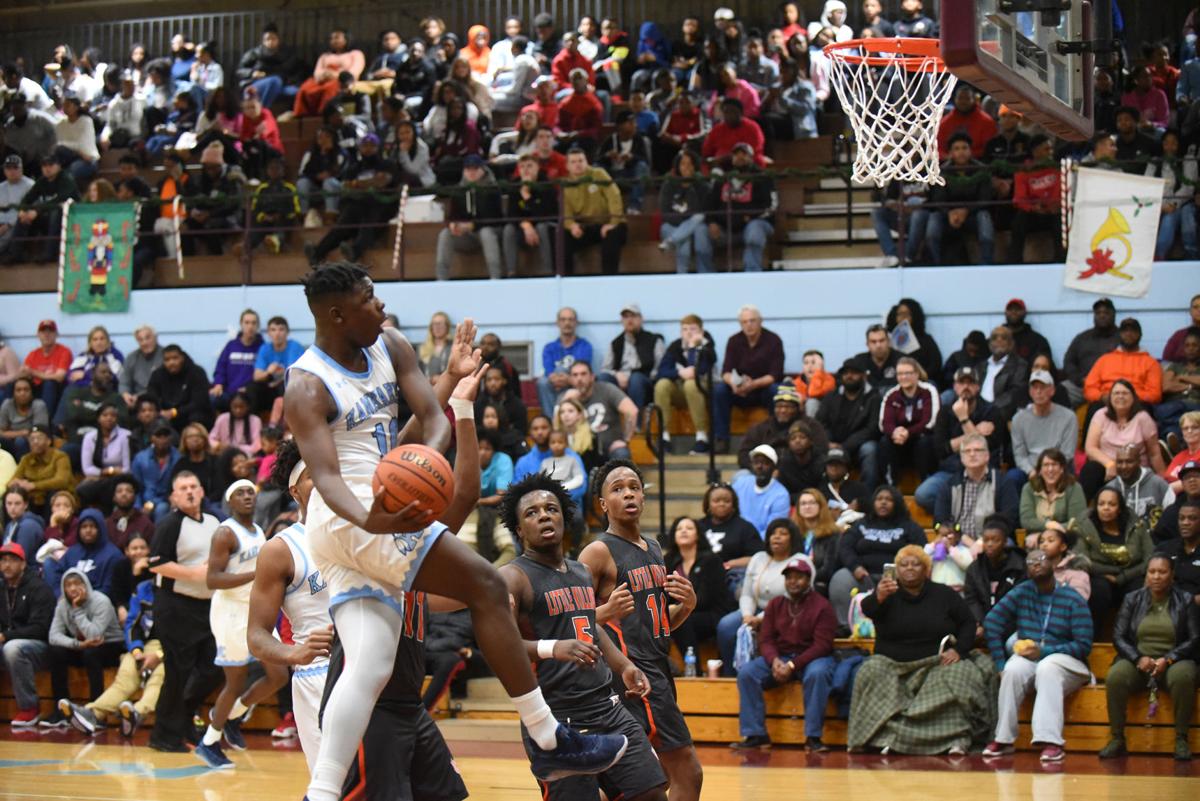 Kankakee’s Rashard Harris avoids contact as he goes for a layup during a game against Little Village at last year's Kankakee Holiday Tournament. This year is the first time since the tournament began in 1950 there will be no games. 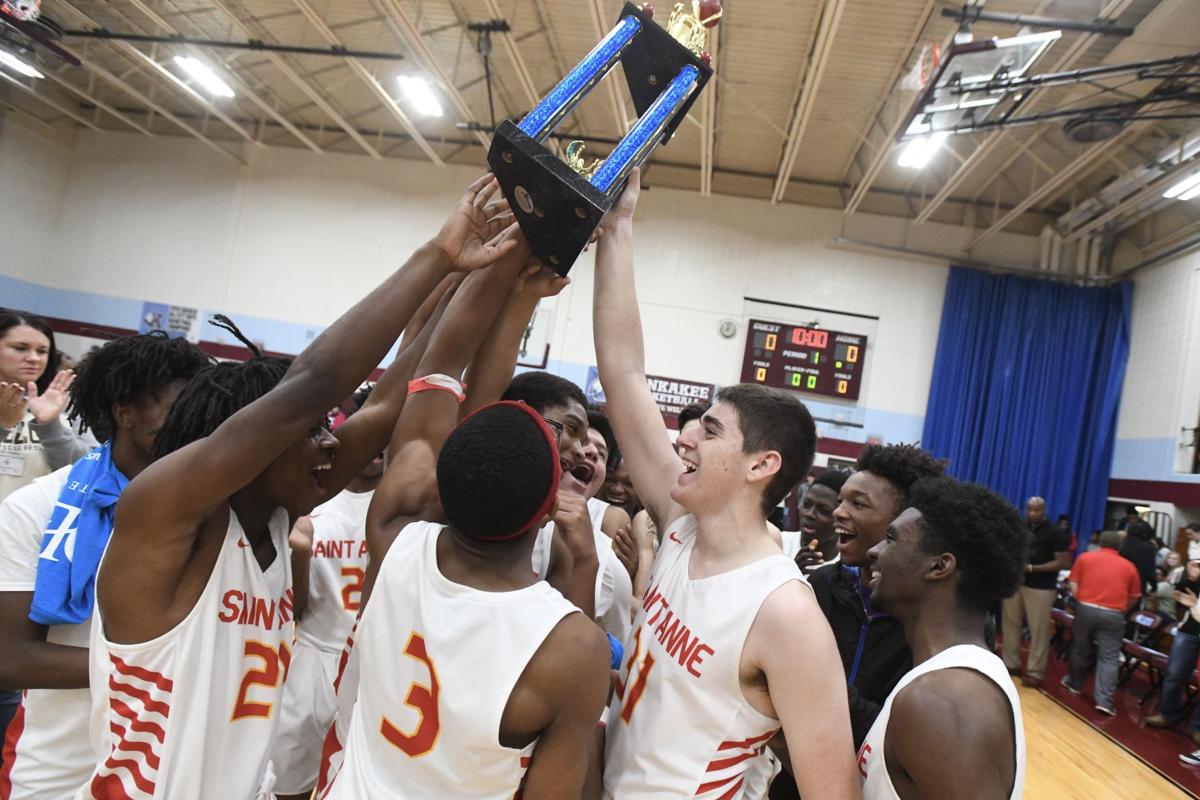 St. Anne players celebrate their 62-43 victory against Central in the blue division championship of the Kankakee Holiday Tournament last year. This year is the first time since the tournament began in 1950 that there was no tournament. 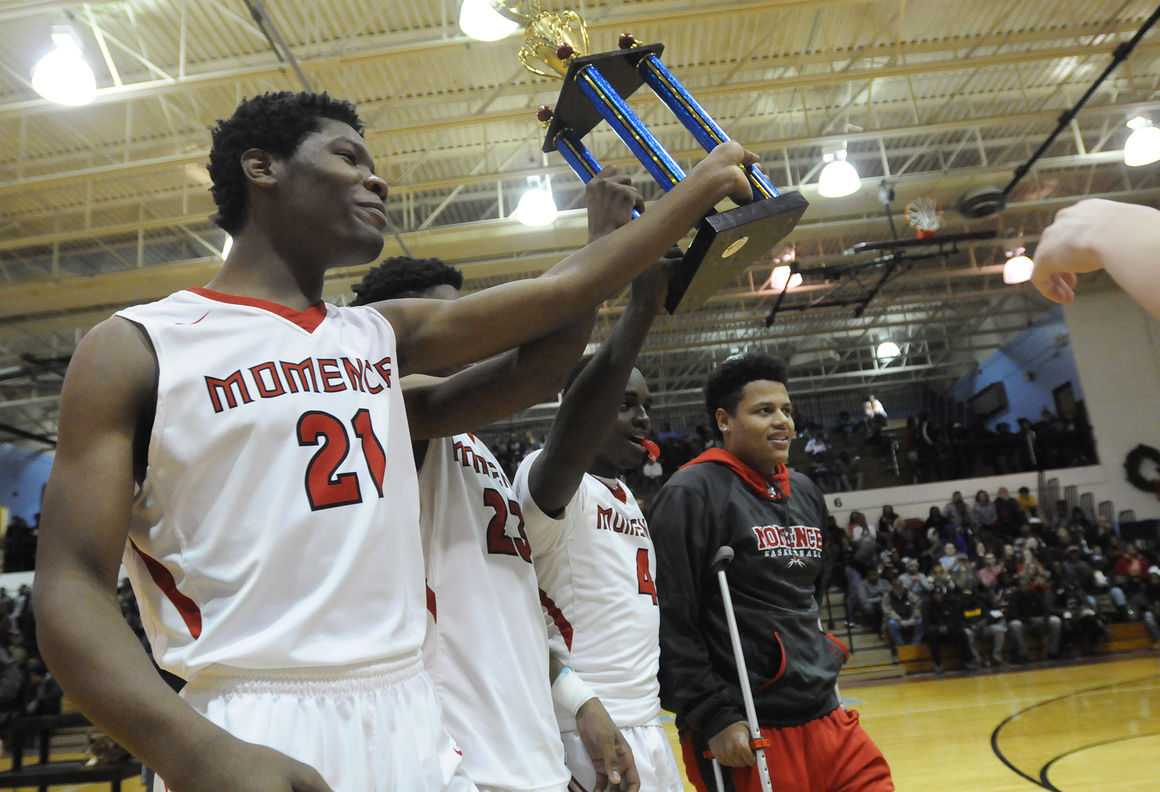 Kankakee players celebrate their 45-38 victory against Wauwatosa West in the maroon division championship of the Kankakee Holiday Tournament last year. This is the first year since the tournament began in 1950 that there will be no games.

Kankakee’s Rashard Harris avoids contact as he goes for a layup during a game against Little Village at last year's Kankakee Holiday Tournament. This year is the first time since the tournament began in 1950 there will be no games.

St. Anne players celebrate their 62-43 victory against Central in the blue division championship of the Kankakee Holiday Tournament last year. This year is the first time since the tournament began in 1950 that there was no tournament.

Every community has its holiday traditions they are as dependent on as Christmas itself. Since 1950, the Kankakee Holiday Tournament — three days full of high school boys basketball action sandwiched around Christmas — has been as permanent a fixture on the calendar as Christmas itself.

Similar to several other traditions around the world, the 2020 tournament succumbed to the COVID-19 pandemic. Kankakee athletic director Ronnie Wilcox said most members of the tournament’s committee, coaches and officials associated with the 16-team field had understood for quite a while the tournament likely wouldn’t be held this year, but it wasn’t officially canceled until earlier this month.

For Wilcox, the decision to hold out hope seemed representative of what athletic directors, players, coaches and fans have been doing all year.

“We were hoping for a Hail Mary miracle or something to happen,” Wilcox said. “Everybody’s holding on to what sliver of hope is left that we can get a chance to play and compete for postseason tournament hardware.”

Denny Lehnus has worn more hats than a journeyman baseball player when it comes to the various ways he’s watched and been a part of the tournament, dating back to his youth just a few years after the tournament’s inception. He remembers when the tournament was one field, not two, and when decorations complimented the gym, such as the large map of Illinois that was lit with bulbs representing the towns the tournament’s field came from.

“It’s all I’ve known since I was old enough to remember,” Lehnus said. “This is a total surprise, and I don’t think it seems real yet. I can’t imagine not going.”

Alex Renchen spent 27 tournaments as a head coach between Kankakee and Bradley-Bourbonnais. While other families were spending the holidays at home, Renchen’s family made the tournament a part of their family rituals during the holidays.

“It’s always been a big part of our family, and it’s been tough, but our family always incorporated basketball into the holidays,” Renchen said. “It’s not like we missed family time; my wife and I spent our first Thanksgiving together at a Denny’s in Rock Island at a tournament.

“It’s different not having basketball during these times, but life goes on, and tough times don’t last — tough people do.”

Herscher coach Ron Oloffson, whose Tigers team drives separately rather than taking a bus because of the tournament’s proximity, said extra time with family has been the one silver lining to the mounting cancellations and postponements, although the desire for normalcy also lingers.

“That’s the one positive is everyone’s had to take a pause in their life and spend more time with their families, spend more time at home,” Oloffson said. “And that’s been the case since March, so with basketball starting, everyone’s been starting to get ready.”

If anyone remembers when the coronavirus took over the world of not just sports but everything, it’s Kankakee boys basketball coach Chris Pickett, whose 2019-20 team saw its season end before getting the chance to play in its sectional championship game last March.

Pickett said without the basketball that usually comes with the holiday season, there’s something in the air that just doesn’t feel right.

“It’s like we’re in the Twilight Zone right now because there are just so many people used to being involved in high school athletics,” Pickett said. “Right now, with the holidays upon us and nothing to do, it’s just throwing everybody off.”

Wilcox echoed his coach’s thoughts and added many of the people who are normally with each other during the season aren’t united in the way they usually are, which is through basketball and through the tournament.

“For not only the school district, but for the community, the people who come back as officials, coaches and volunteers, there’s not just great basketball but a lot of great friendships,” Wilcox said. “I’ve been here for 14 years, and there are some people who have been coming back for 50 years, and they’ll tell you the same thing — that the energy is just kind of off, and something’s missing.”

The tournament is just one of several that have been casualties this winter, along with other iconic tournaments, such as the Pontiac Holiday Tournament and Marseilles Holiday Tournament. Pickett, who has decades of experience in the mecca of Chicago prep hoops, said Illinois is known for its holiday tournaments, and history will look back differently on the year that had no holiday hoops.

“There’s definitely a void,” Pickett said. “When it comes to holiday ball, not every state does it the way we do it. Holiday basketball is a priority in our state, and the awkwardness of the situation is just throwing everyone off.”

The hope in the state is basketball and other winter sports will be able to resume sometime in January, but the Illinois High School Association said earlier this month it will decide to start the season whenever the Illinois Department of Public Health lifts its current COVID-19 mitigations, meaning the waiting game will continue.

As delays continue, it’s possible, if not probable, the winter sports slate even will overlap with the spring, which means the state’s two most popular sports, football and basketball, could see competition for student-athletes.

Joe’Ron Hill, a senior for the Kays, has been going to the tournament ever since he can remember. He said he still remembers watching former Kay Kyle Loy sink a buzzer-beater to top Bradley-Bourbonnais when he was in elementary school. Now, as his own senior tournament has been taken away, the football and basketball standout is doing what everyone else is doing — waiting.

“I’m just really trying to figure it out and see what happens next.”