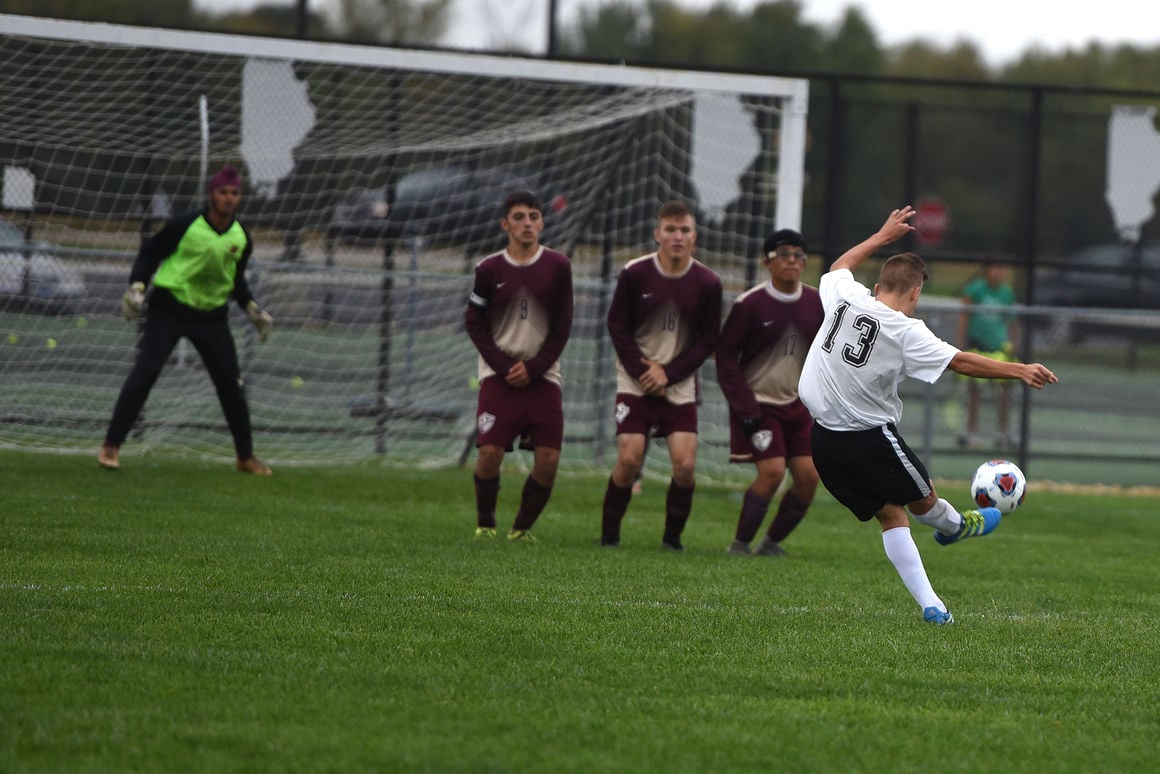 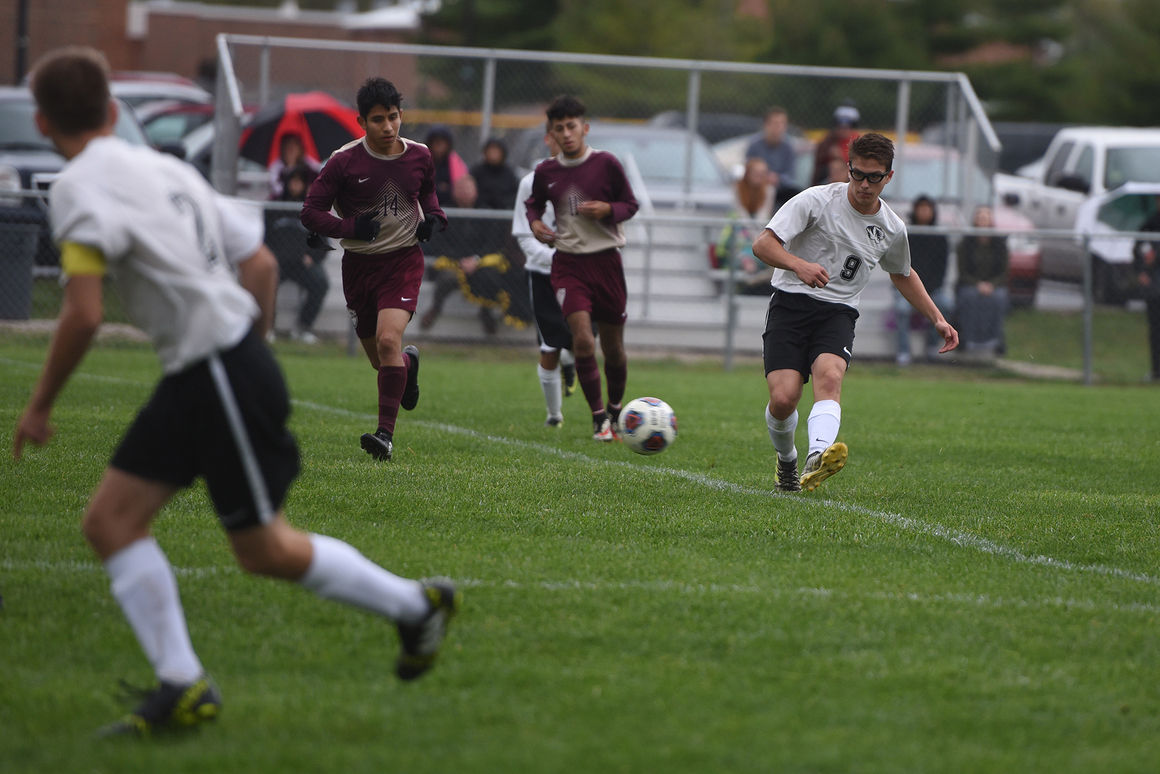 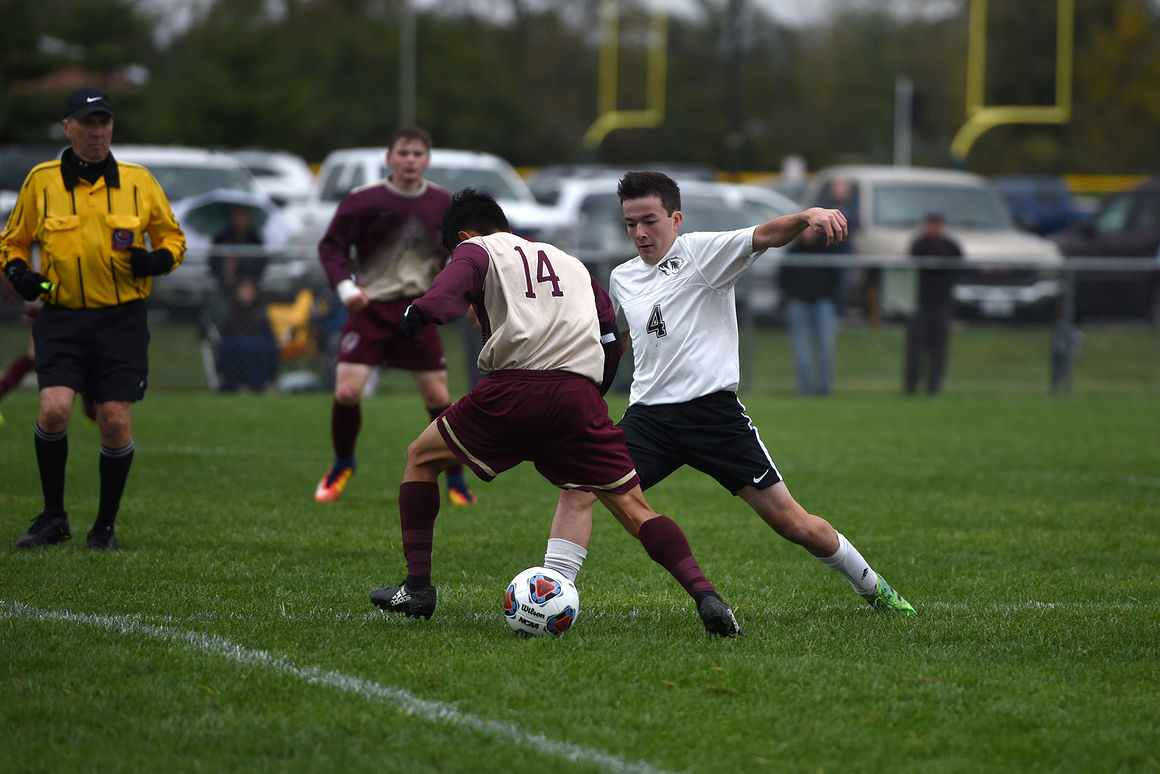 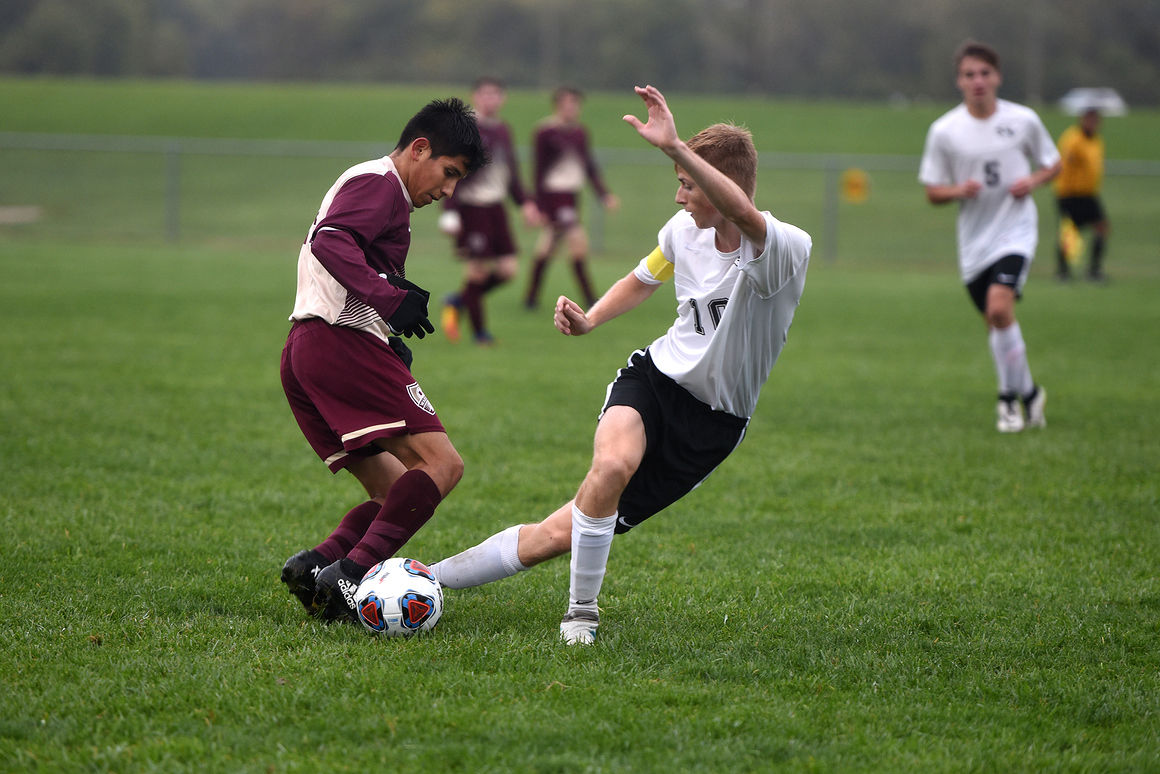 Herscher High School senior Brandon Sommer fights for the ball against Watseka High School senior Diego Cintora on Wednesday. Herscher won 3-1. The top-seeded Tigers will take on the winner of today's semifinal contest between Momence and Coal City on Friday for a shot at a regional championship and trip to sectionals.

Herscher High School senior Brandon Sommer fights for the ball against Watseka High School senior Diego Cintora on Wednesday. Herscher won 3-1. The top-seeded Tigers will take on the winner of today's semifinal contest between Momence and Coal City on Friday for a shot at a regional championship and trip to sectionals.

COAL CITY -- After weather postponed the Class 1A Coal City Regional semifinals one day, both Herscher and Watseka were anxious to kick off Wednesday afternoon.

After an up-and-down first half on a wet afternoon, the top-seeded Tigers slowed the pace in the second half en route to a 3-1 victory.

"We've been chomping at the bit since last October," Herscher coach Alan High said, referring to the Tigers' season-ending last October at super-sectionals.

Herscher got the scoring started early, when Logan Lunsford's header found the back of the net off a Bascom Jackson corner kick in the second minute, much to the pleasure of High, putting Herscher ahead 1-0.

"We told them before the game that it was big to get on top early," High said. "But then (Watseka) came down and made a nice play and put us on our heels a bit."

The nice play High referred to was a Diego Cintora goal in the fourth minute after a couple of nice back-and-forth passes with Erick Avelar to tie the game at one.

"We wanted to be able to say that it's a ball game, especially against that caliber of a team," Watseka coach Jerry Parker said. "(The goal) showed that we don't quit and continue to push."

Herscher tallied another goal at the end of the half, when Jackson scored in the 36th minute to give his team a 2-1 lead. After the break, Herscher protected its lead by slowing the game down in the second half.

"In the second half, we didn't want to get in a track meet on a wet field," High said. "More mistakes happen when you try and move quickly on a wet field, so we slowed it down a bit and made them work for their possessions."

The Warriors also slowed their attack down in order to be more efficient with the ball to try to tie the game up for a second time.

"We talked at the half, especially when everyone is more tired, to move the ball more and move to open space," Parker said. "They did a good job of that; we just couldn't put one in the net."

The slower pace worked well for both teams. Watseka was able to get deep into Herscher's defense more frequently, but the Tigers' defense was up for the challenge. High credited his back line for its ability to create turnovers in the defensive third of the pitch.

That made it an easy day for goalkeeper Jack Holohan, who only faced five shots on goal and stopped four of them.

The Tigers also saw more looks in the second half. Dougie Schultz had a goal called back on a questionable offsides call, but the Tigers ultimately struck gold again in the 76th minute when Schultz fed Coby Mollema for a goal to put the game on ice.

Herscher had a whopping 19 shots on goal, and Warriors goalkeeper Sahib Singh saved 16 of them.

Although a loss was not the way the Warriors wanted to end their season, Parker couldn't have imagined his team ending its season on a better effort.

"We were in it until the very end, because (Singh) did a great job, and our midfielders and forwards continued to battle when they were exhausted," Parker said. "The only thing better was to win."

The Warriors will say goodbye to nine graduating seniors, including Cintora and Singh.

The top-seeded Tigers will take on the winner of today's semifinal contest between Momence and Coal City on Friday for a shot at a regional championship and trip to sectionals.