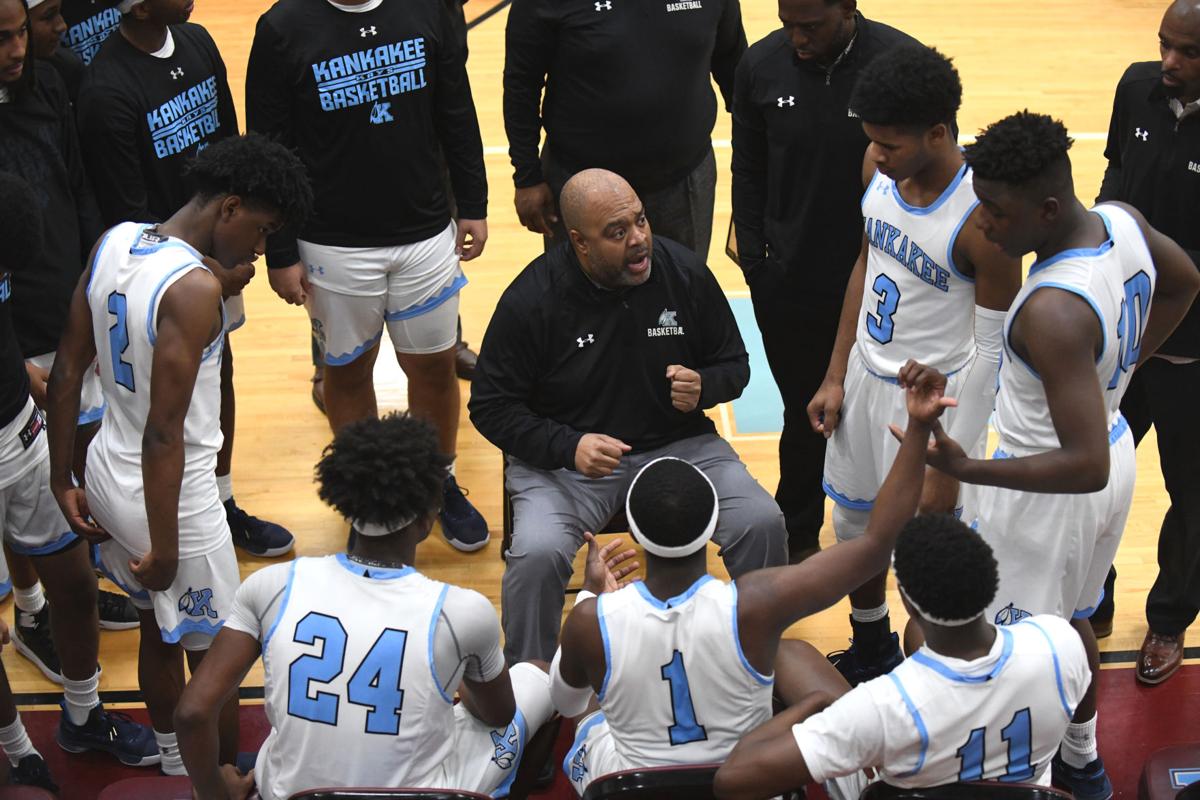 Kankakee head coach Chris Pickett talks to his team during a timeout during the Kay’s 45-38 victory against Wauwatosa West in the maroon division championship of the Kankakee Holiday Tournament last season. Pickett was one of several local coaches and athletes that recently discussed the importance coaches have on student-athletes during today’s time of social unrest. 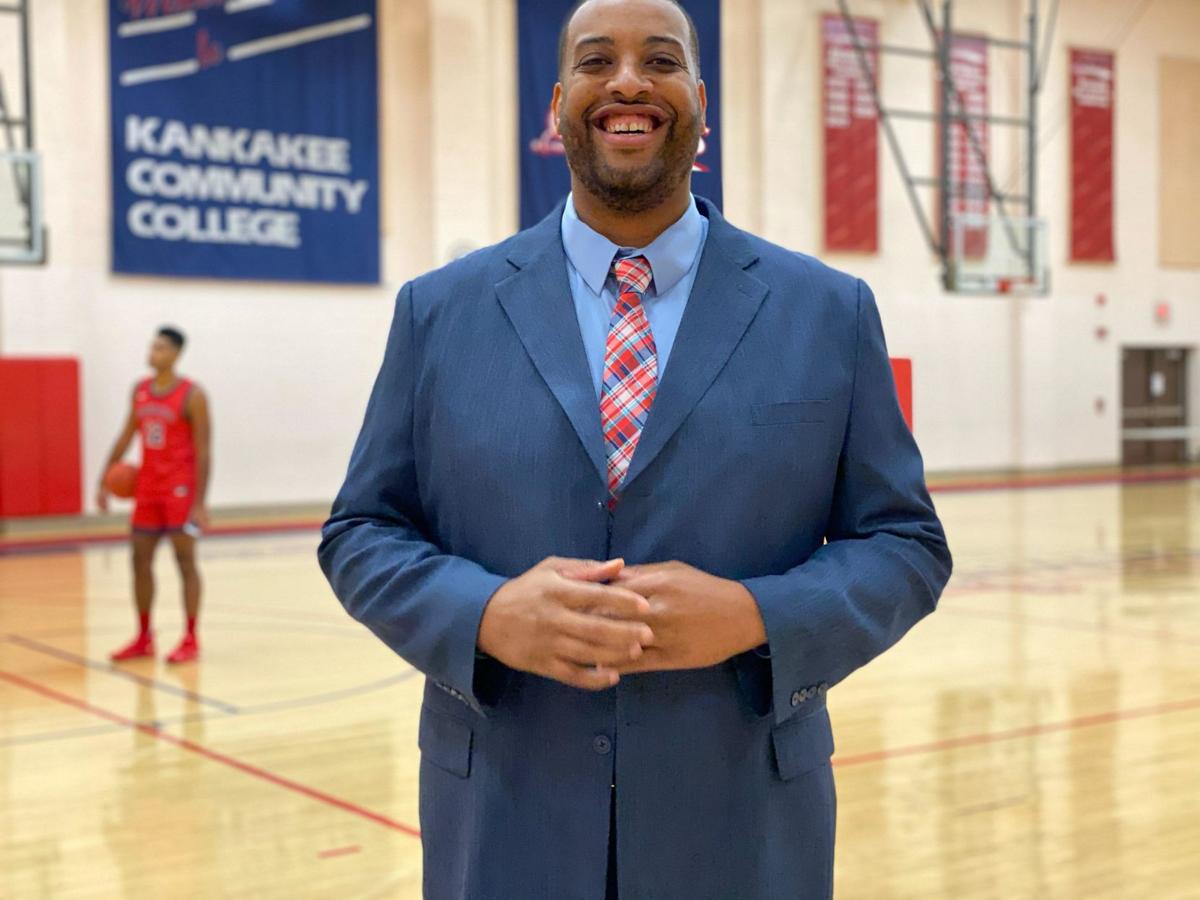 Editor’s note: This is the first story of a two-part series on the role of coaches in the lives of their young athletes during crucial times such as the current social justice movement. This weekend’s story focuses on the importance of coaches supporting their players, while next weekend’s story will focus on what can be done moving forward.

Devin Johnson has seen it plenty of times, too many times in his 35 years. Johnson, the assistant men’s basketball coach at Kankakee Community College and head of All Love Basketball, a local AAU program, has seen the same cycle of an instance of police brutality becomes national news, a brief push for social justice is made, only to slowly fade back into oblivion.

But with the recent push for social justice that has come in the wake of the cases of George Floyd, Breonna Taylor and others, Johnson has noticed more of a charge than prior movements.

“This story has kind of been written over and over again where something happens in this country, the momentum for change picks up steam and then dies down,” Johnson said. “The difference now, and what gives a lot of people hope, is how strong the movement has been recently.

Protests have popped up everywhere, from Kankakee County to New Zealand, as the push to recognize social injustice has surged higher than it has perhaps ever been, certainly on par with the social justice movement of the 1960s.

As sports slowly pick back up from their coronavirus slumber, coaches across the board saw their contact time with the kids they coach dwindle down in recent months.

And between the virus and social unrest, it’s been a time where young kids, particularly African Americans, are looking for support.

Bishop McNamara boys basketball coach Adrian Provost hasn’t been able to see his kids on the court much lately. As a Bradley police officer though, he has seen current and former players partaking in Black Lives Matter rallies. Provost said it’s a proud feeling to see his kids pushing to make a difference.

“A part of me is proud that they want to take part in that.”

Owen Jackson, a 2020 McNamara graduate, played basketball for Provost and played all three of his sports (football, baseball and basketball) for assistant coach Kurt Quick, an Illinois State Police trooper. Jackson said that those are two of the coaches he has felt most comfortable with, and noted that officers interacting in the community, in roles such as coaching, are important.

“They help us in more ways than what people see and if they were to show that they wanted to give back and help people understand where they are coming from, then hopefully people would see that they help us.”

The discussion on police interactions

Provost said that there are times his players are involved in interactions with police, typically for minor traffic violations. During those times, he answers questions his kids may have and discusses what can be done to minimize the chance of things going wrong.

“It doesn’t really matter what background you come from or what race you are, if the police pull you over on a traffic stop, the rule of thumb is cooperate, answer the officer’s questions honestly and do what they ask you to do,” Provost said. “If you think the officer is being unfair, disrespectful or communicating in an inappropriate way, that’s something you need to deal with after the fact. To get in an altercation with an officer is a no-win … so just cooperate.”

But with that, Provost also noted that officers themselves are prone to make mistakes.

“That sounds pretty basic and officers aren’t always right — we’re human and make mistakes,” he said. “An officer might tell you something they don’t have the right to tell you to do, but I’m not sure arguing with them and getting into an altercation with them is the best thing.”

Chris Pickett, the boys basketball coach at Kankakee, has seen positive police relationships in the community and in his family, where his cousin, Derek, is a sergeant in the Chicago Police Department. But after predominantly living in Chicago, Pickett has also seen the exact reasons that protests continue today, which is why he and his staff dedicate time to work with and educate their players on how to handle interactions with law enforcement, whether warranted or not. This time includes bringing in local law enforcement to speak with players.

“I’ve always had to deal with teaching the guys how to navigate outside of the gym, even something as small as making sure that you have your state ID when you’re walking the streets, riding a bus, driving a car, whatever the case may be,” Pickett said. “It was a big deal in Chicago for a long time that if there was a crime going on and someone can committed a crime, police would just snatch whoever fit the description and if you can’t prove who you are, you don’t have anything to fight with.”

Aside from working with his kids on police interactions, Pickett and his staff make sure to engage with their players about all phases of life and in a variety of ways, according to Kays junior Kamar Whitaker.

“Coach Pickett makes sure I’m in the weightroom, gym and classroom every day,” Whitaker said. “He talks about my sister with me and the rest of my family ... He talks to me on a day-to-day basis and makes sure I’m doing what I’m supposed to all the time.”

The son of a segregated college student and grandson of sharecroppers, Pickett said that people, regardless of age, race or status, don’t always understand that society is not long removed from some very different times and that there is still plenty of progress to be made.

“We talk about that in class — a lot of our students are in Kankakee because their grandparents migrated from the south...,” Pickett said. “In relation to the world, we’re a young country and we’re still ironing out some issues that need to be ironed out quickly because we all live together.”

Johnson works with kids and young adults of all ages between All Love Basketball and his role at KCC. Whether it’s with his younger kids or at the college level, his priority, like it is for Provost, Pickett and every other sports coach, is to be a role model.

“Being a role model beyond basketball is so important and especially I think right now with things going on, a lot of kids are looking for hope and trying to figure out what’s next,” Johnson said. “They’re a little confused with none of us having lived through any of anything like this before.

“I think one of the biggest things we’ve been able to do, especially in our AAU program and even at the college, is bringing people together,” he added. “We have so many people from different demographics and that we deal with or that I will deal with and I try to make them all understand having empathy for each other under, understanding that your situation is not like the person that’s next to you.”

Brian Hernandez, who won a pair of state titles at Orr Academy before continuing his academic and basketball careers at Kankakee Community College, said that he has been able to find trust in both Johnson and head coach Alex Thorson, as well as his teammates.

“It’s good to know that you have coaches that actually care about you and understand what you’re going through, even when they’re not around,” Hernandez said. “Other people I can talk to are my teammates, especially the ones that live in Chicago, because we understand what’s going on.

“We check in on each other to make sure that the others are OK, and since the gyms are opening, we try and meet up and play ball as much as possible.”

Gyms may be opening back up and sports may be on their way back, but even as life slowly gets back to normal, the issues that are being protested continue. And as sports come back, and coaches like Johnson start to see their kids get back together, the hope continues that kids and coaches can continue to learn from one another.

“With All Love, the name says it itself and that’s been the concept of it, bringing in the communities together,” Johnson said. “We have kids from Kankakee, Gilman, the south suburbs, Bourbonnais, Manteno.

“All of these areas are different, but when you start bringing these kids together and they start meshing, it is really cool.”

Local coaches and student-athletes discuss how to keep the momentum towards social justice and equality moving forward in the second of a two-part series.