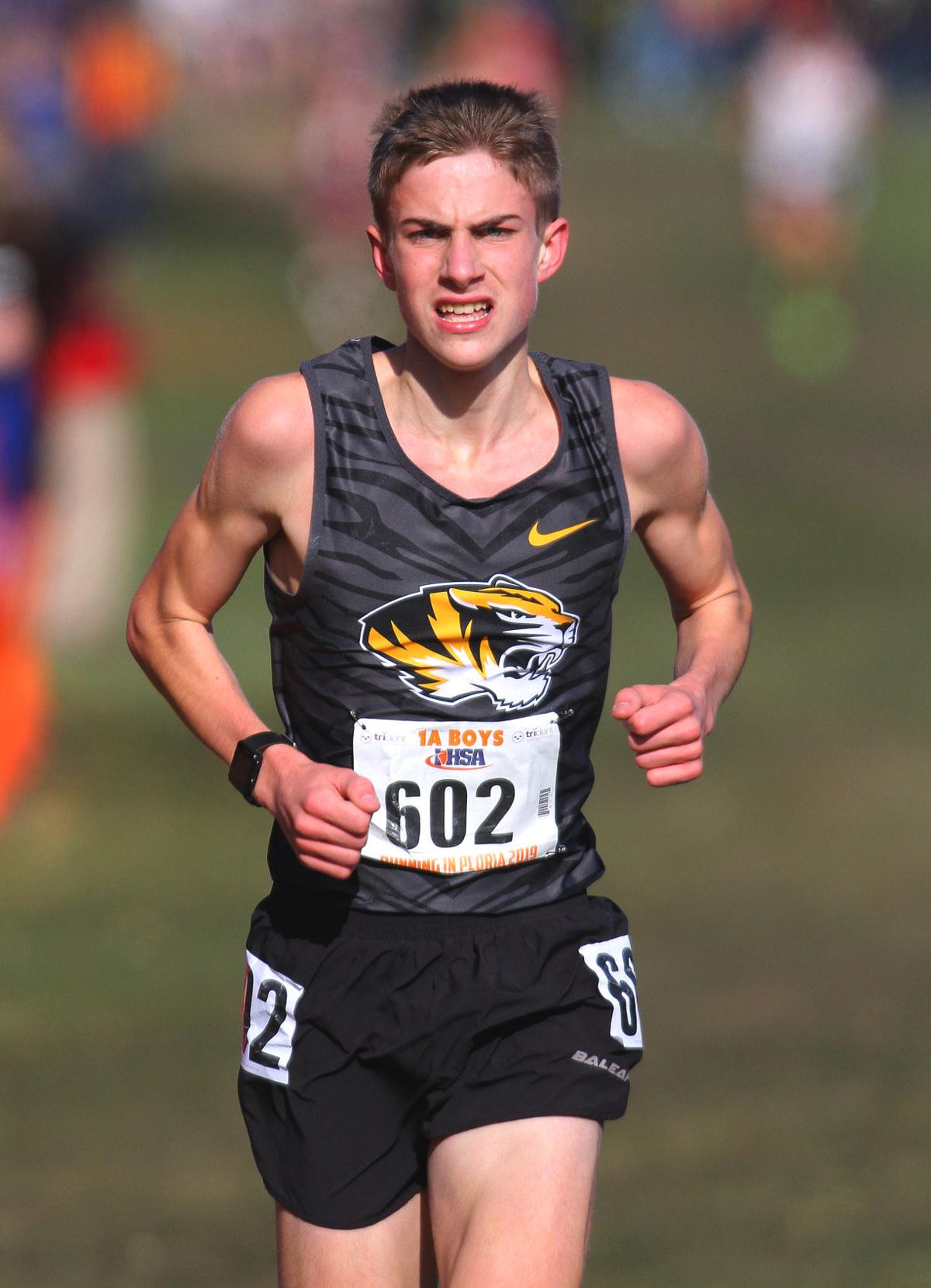 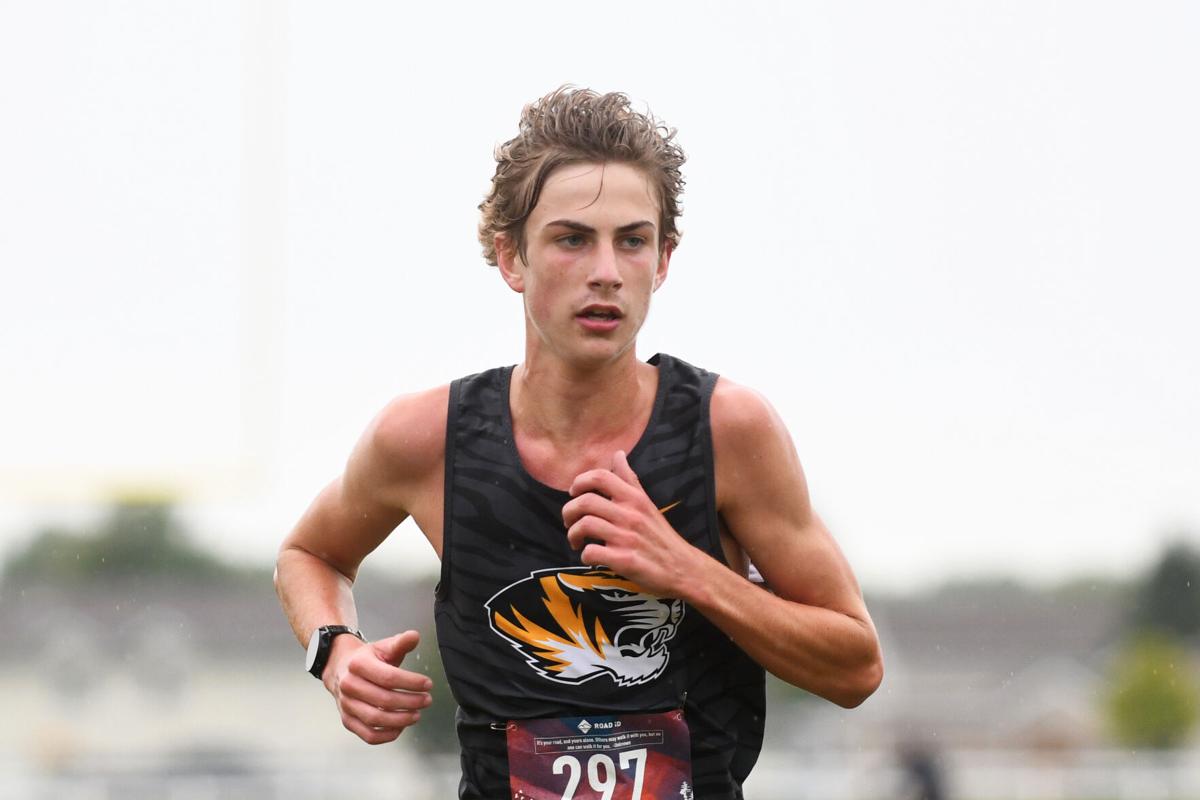 Herscher’s Drew Rogers crosses the finish line in first place during a boys cross country meet at Legacy Park in Manteno last week. Rogers, the defending IHSA Class 1A state champion, won't have the chance to defend his title this fall but is continuing his stint as one of the best runners in the state.

Herscher’s Drew Rogers crosses the finish line in first place during a boys cross country meet at Legacy Park in Manteno last week. Rogers, the defending IHSA Class 1A state champion, won't have the chance to defend his title this fall but is continuing his stint as one of the best runners in the state.

Drew Rogers made it known he was one of the best runners in the state as a sophomore. He won the Class 1A state title last season, running the 3-mile race in just 14 minutes and 30 seconds to crown himself best in class less than two years into his high school career.

But cross country wasn’t always Rogers’ primary sport. He wasn’t training for distance running at a young age but rather skating shifts as a hockey player. It was hockey that was the sport he put first through seventh grade.

“Prior to cross country, my main sport was hockey,” Rogers said. “I really liked hockey a lot, but when I started getting into running, it kind of took over. I really liked the team aspect of the sport.”

Rogers first discovered his passion for running thanks to his mother, Jenny. It didn’t take long for him to learn he had a knack for it.

“The first time I got into running was probably when I was 9 or 10 years old,” Rogers said. “My mom signed me up for a mud run 5k, and I ended up I think winning it or taking third, and it made me interested to keep going with it.”

Finding his new love, Rogers had to wait patiently until seventh grade to be able to run for Limestone Middle School. From there, he put all his attention to running, leaving hockey behind.

“You’re going to get what you put in,” Rogers said. “You are going to see your times drop if you are putting in the hard work, and so that’s one of the biggest things.

“I think that’s one of the most unique things about the sport is if you work hard, then you will see improvement right away.”

With all his focus on running, Rogers saw immediate results. He ended up winning state for the 1-mile race in back-to-back years in seventh and eighth grades, which only fueled him for greatness even more.

“This is my fifth year getting to coach him. … He just has a racing instinct about him,” Herscher cross country coach Rob Grosso said. “He was doing things even in junior high that you wouldn’t expect until he would be in 11th or 12th grade.

“Rogers showed even then some racing instincts that not many people have.”

Things only got better as Rogers began his high school career at Herscher. Aside from winning state last season, Rogers also has managed to set school records for both the mile and 3-mile races. He owns Herscher’s school record in the 1-mile with 4 minutes and 17 seconds as well as the 3-mile with a time of 14 minutes and 30 seconds. Rogers also unofficially broke the record for the 2-mile during time trials.

“It’s fun to be a part of and see it happen,” Grosso said. “I hate to say the word deserved, but he’s earned everything that’s ever [come] his way. He’s 100 percent not lucked his way into anything; he’s worked for it all.”

Rogers even went on to put his skills to the test running in the Nike Cross Nationals MidWest Regionals last year, where he went on to take 31st out of 309 runners after finishing the 5,000 Meters Championship Race at 15 minutes and 42 seconds.

“He competes against himself like I’ve never seen before,” Grosso said. “He’s got that drive that is just on a whole different level.”

All the records and achievements Rogers has been able to accumulate during his short career are all because of his dedication and motivation to keep improving. Aside from practicing with his high school team, Rogers gets plenty of work done on his own.

“He’s just a workout machine; he puts workouts together on his own on days that we don’t meet that are tough, if not tougher, than some of the things we do all year,” Grosso said. “He does a lot of homework into what he feels like he needs to do extra in order to separate himself.”

This past offseason, Rogers ran 500 miles during the summer weeks, and he regularly has been running between 55 to 60 miles per week during this season. His hope is it all will pay off down the road so he can continue his cross country career into college.

“I’m not sure if I want to stay close to home or go farther away, but I definitely know I want to continue my cross country career in college,” Rogers said.

His dream would be to run for the Lumberjacks at Northern Arizona University, an NCAA Division I school located in Flagstaff, Ariz. On the other hand, if that doesn’t pan out, Rogers said he will look to stay within a couple of hours of Kankakee so he can be closer to his family.

“I would like to go under 14 minutes for 3 miles; that’s one of my biggest goals,” Rogers said. “I’m not sure for 2 miles yet — I want to break at least 9 minutes, and for the 1 mile, I hopefully can get around 4 minutes and 5 seconds or sub 4-ish. That’s a big goal, but I think like only 10 high school runners have ever done that.”

Coming into this season, Rogers is more confident than ever after dominating at state last season. He feels as though his whole mentality has changed since tasting sweet victory in Peoria.

“I’ve definitely been a lot more confident coming into this season,” Rogers said. “Last season, I would go into my races and kind of stay with the first guy for the first mile, but this year I’ve done a lot of focusing on running quicker in the first mile to help set myself up for a better time.”

Even though running has taken up a lot of Rogers’ free time, he still finds time to be a regular kid. He enjoys shooting some hoops or casting a line anytime he gets the chance.

When it’s all said and done and Roger’s collegiate career is over, he plans to continue his new lifestyle, even if it’s just for fun.

“I would like to keep running competitively, but I don’t know really where that’s going to go,” Rogers said. “I’d like to continue to run even for fun after I graduate college.”