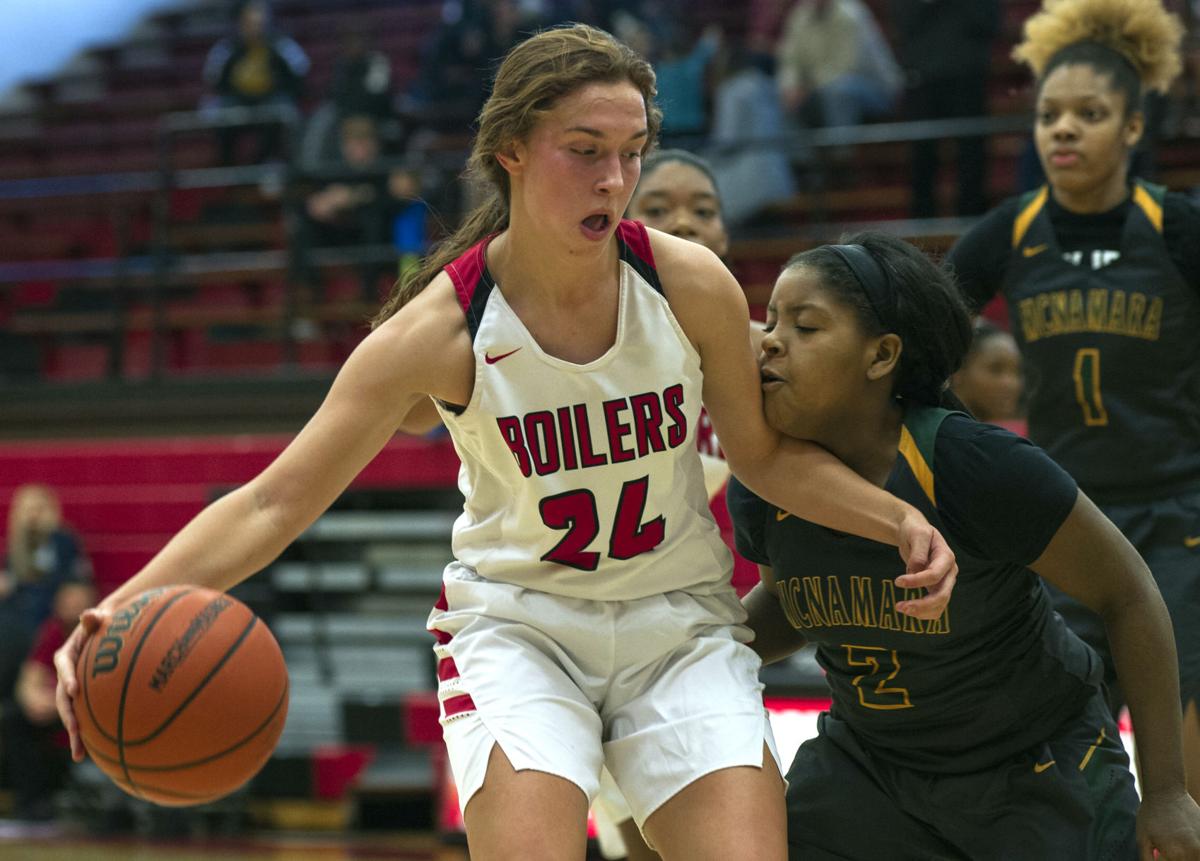 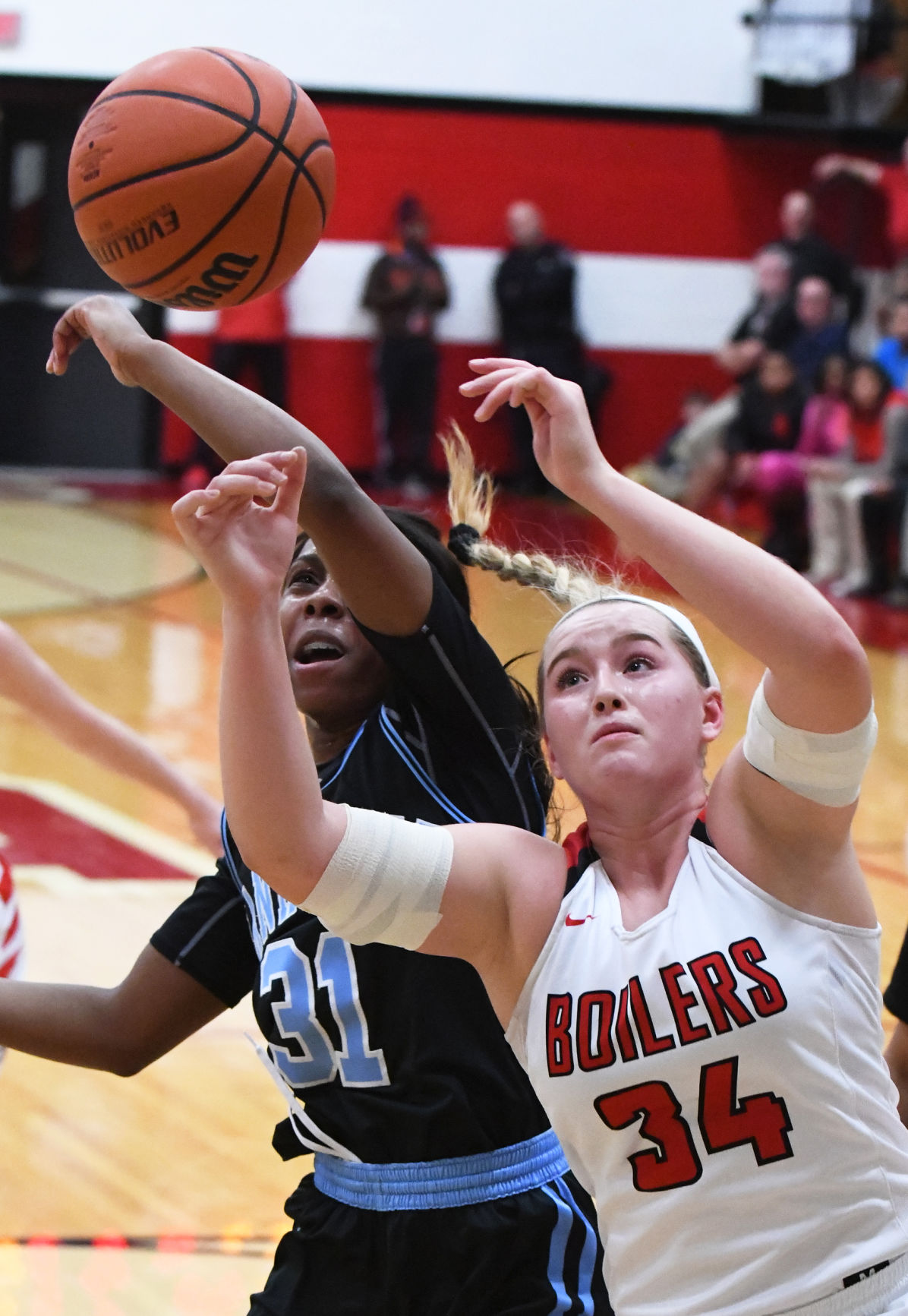 {p class=”p1”}Kankakee’s Ambranette Storr and Bradley-Bourbonnais’ Evey Evans reach for a rebound during All-City action last season. The two teams, along with Bishop McNamara, will join their schools’ boys basketball teams at this year’s Thanksgiving Classic at Olivet Nazarene University next week.{/p}

{p class=”p1”}Kankakee’s Ambranette Storr and Bradley-Bourbonnais’ Evey Evans reach for a rebound during All-City action last season. The two teams, along with Bishop McNamara, will join their schools’ boys basketball teams at this year’s Thanksgiving Classic at Olivet Nazarene University next week.{/p}

Bradley-Bourbonnais boys basketball coach Alex Renchen has seen it all at the Thanksgiving Classic at Olivet Nazarene University over the past two decades as the only area coach to be a part of every tournament since its inception in 1998.

But the 2019 tournament will be something new for even Renchen, as Herscher decided earlier this year to withdraw from the tradition, opening the door for the girls teams from Bishop McNamara, Bradley-Bourbonnais and Kankakee to join their boys basketball counterparts.

“I’m obviously concerned about losing a game (against Herscher), but it brings a new excitement,” Renchen said. “The girls get to come in and see the benefit of that and, maybe, they’ll enjoy it more.”

The format for this year’s tournament still will be the same in terms of scheduling. The tournament tips off Tuesday and features back-to-back games between Bishop McNamara and Kankakee. The girls will start things at 6, followed by the boys at 7:30.

The same format will be followed Wednesday and Friday. The girls and boys teams from McNamara and Bradley-Bourbonnais face off at the same times Wednesday, with the Boilers and Kays wrapping up the tournament Friday night.

The addition of the three all-city girls teams brings plenty of pedigree to what already is a highly-regarded tournament, as all three programs are going through some of their best stretches in their respective programs’ histories.

The Boilers have compiled a 90-29 record since head coach Evan Tingley came aboard four seasons ago, and the program has seen four regional championships in the past six years, three of them under Tingley.

Kankakee coach John Maniatis took over a middling program two seasons ago and instantly made the Kays one of Illinois’ most successful programs during his time in town. The Kays went 23-8 and won a sectional title in 2017-18, while they had their state championship dreams dashed by Bishop McNamara in regional championship action after a 30-1 regular season in 2018-19.

Meanwhile, the Irish have won at least a regional championship every year this century and have four state title appearances over that span, including an IHSA Class 2A title in 2014-15.

“The quality of play in girls basketball in this area has been incredibly high over the past five to 10 years,” Tingley said of the girls’ addition to the tournament. “I’m extremely excited to see the young women of our community get a chance to play on the same stage that the young men have been for 20 years. It’s a win for the players, coaches and community.”

Rookie Irish coach Curtis Crossley might be new to his head coaching role, but his knowledge of area girls basketball was apparent when he listed all the current and recent players from the three city schools that have gone on or will go to big-time colleges.

“Our area has been recently producing a ton of [NCAA] Divison I women’s basketball talent in Bishop McNamara’s Khadaiza Sanders [Rutgers] and Allie Berg [IUPUI], Kankakee [senior] Ambrannette Storr [Drake] and (Bradley-Bourbonnais’) Mikayla Brandon [Northern Illinois], Venisha Sherrod [DePaul] and many other exciting girls basketball players that have treated fans to some great basketball in recent years,” Crossley said. “I expect that to continue next week in the All-City matchups.”

Maniatis, whose Kays team features one of the region’s top recruits in Storr and fellow all-stater Imani Williams, said his team is thrilled to show a larger audience how great the girls basketball scene is in the area.

“Kankakee girls basketball is honored to be a part of the Thanksgiving Classic, with it involving all of our [area] basketball teams,” Maniatis said. “It’s exciting times for the continued growth of the game of basketball in Kankakee County.”

Irish boys coach Adrian Provost shared the same excitement the area girls coaches with the new format, but also said he wouldn’t mind seeing another adjustment to the tournament schedule, perhaps pushing it back in the season and abandoning the Thanksgiving theme to avoid playing after little to no practice with the quick turnaround from football.

Last season, the Irish football team was playing in the IHSA Class 4A state championship during the final night of the tournament, which meant a bulk of his team wasn’t able to make the memories the tournament normally provides.

“This year, I’ll have my kids [for the tournament], but they’ll have only had four practices in,” Provost said. “If we could have it later in the year, when teams are more polished and the community could maybe see a better brand of basketball, it would be awesome. But it’s a great way to start the year.”

As for the Tigers, athletic director Todd Schwarzkopf said the school had to make a difficult decision in reaction to falling enrollment.

“Unfortunately for us, our declining enrollment has forced us to make some tough decisions,” Schwarzkopf said. “We will really miss playing at ONU, but know it is time to move on to something else.

But the Tigers and coach Ron Oloffson didn’t have much trouble finding a new Thanksgiving tournament with plenty of prestige in its own right, the Seneca Thanksgiving Tournament.

“We will play at Seneca on Tuesday, Wednesday, Friday and Saturday,” Schwarzkopf said. “It’s a tournament with very good teams more our enrollment size and gives us teams we would not normally see during the school year.”