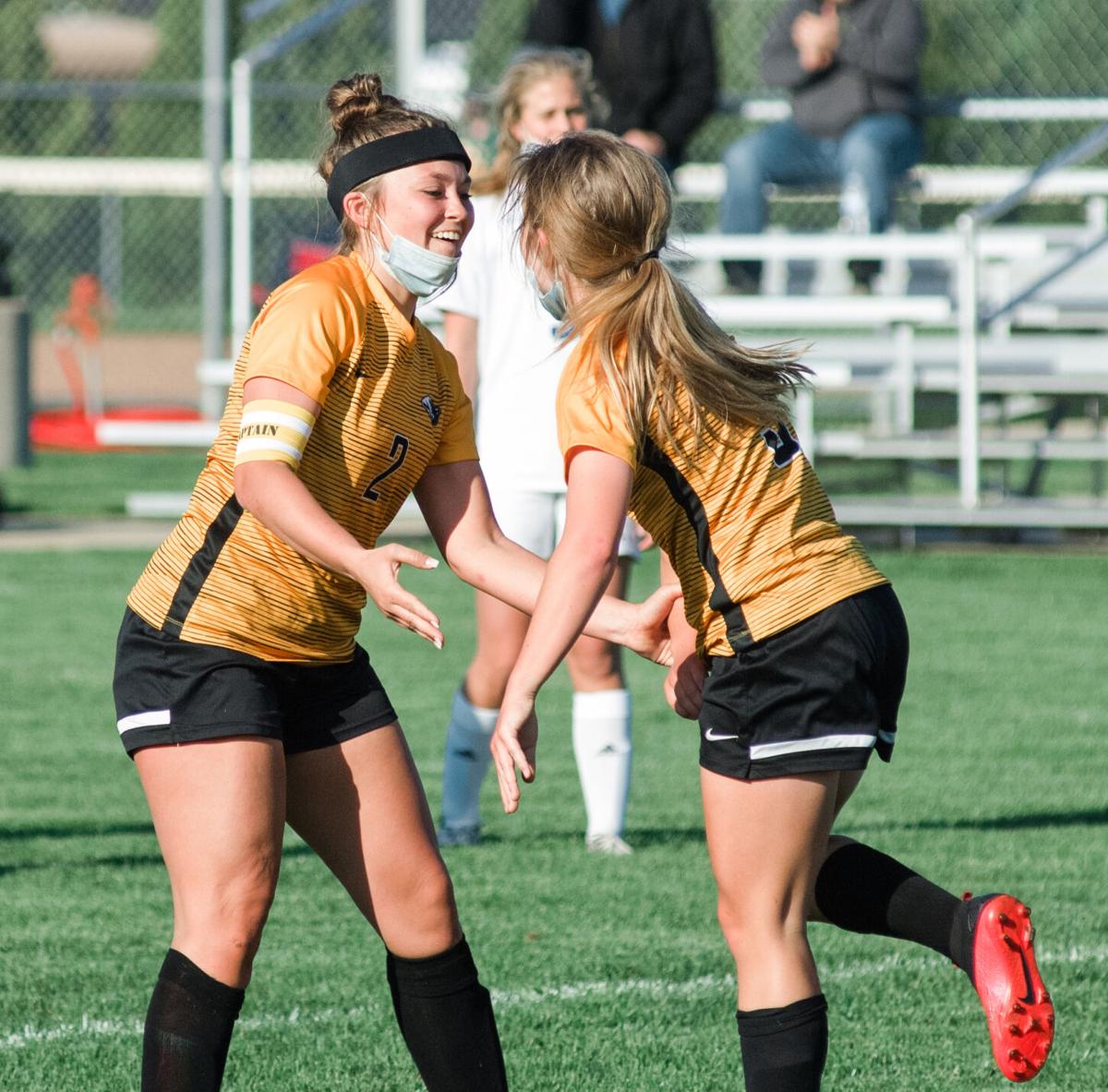 Herscher's Jalynn Miner (2) congratulates Katelyn Borschnack after she scored on a play during Friday's game against Peotone. 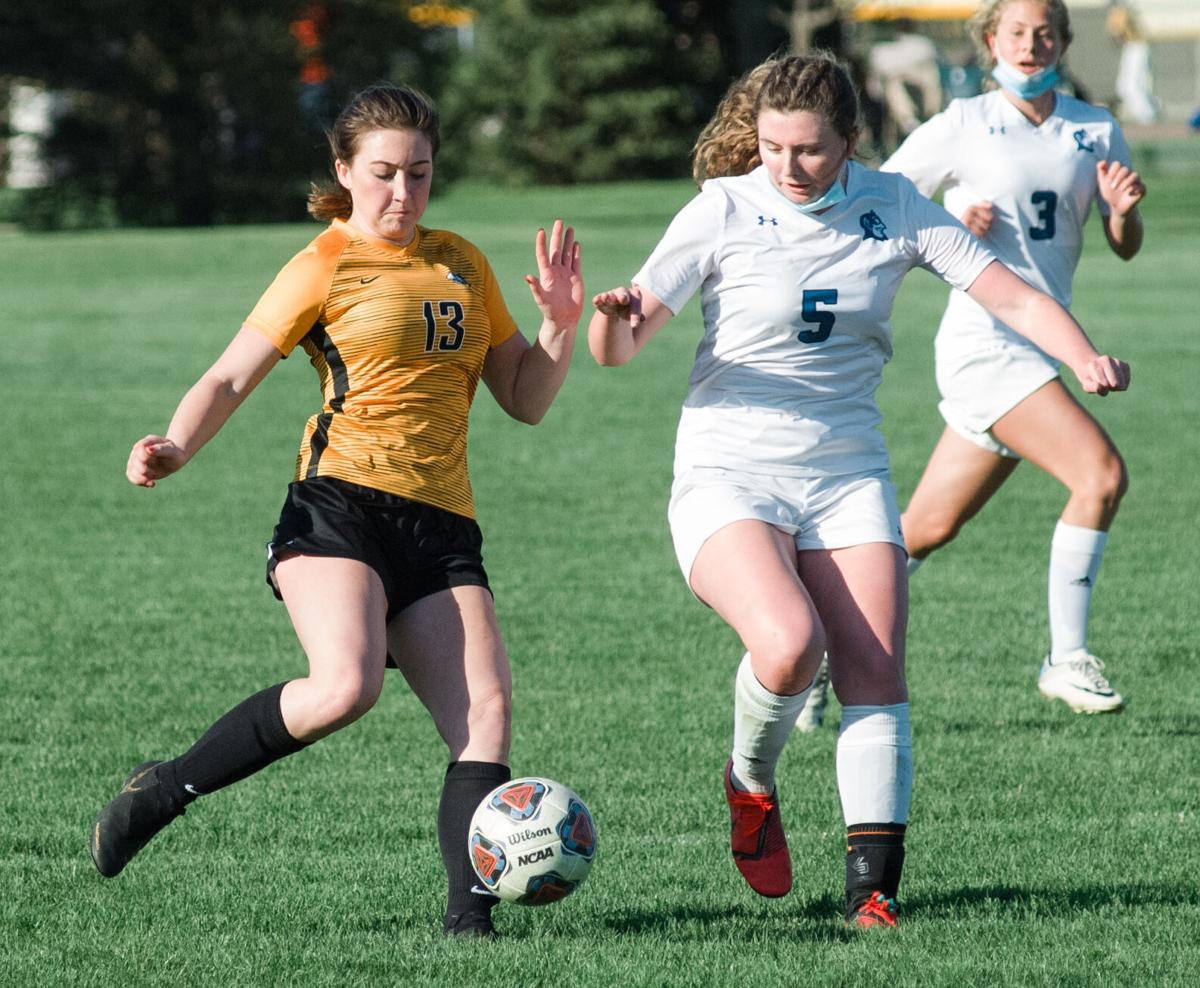 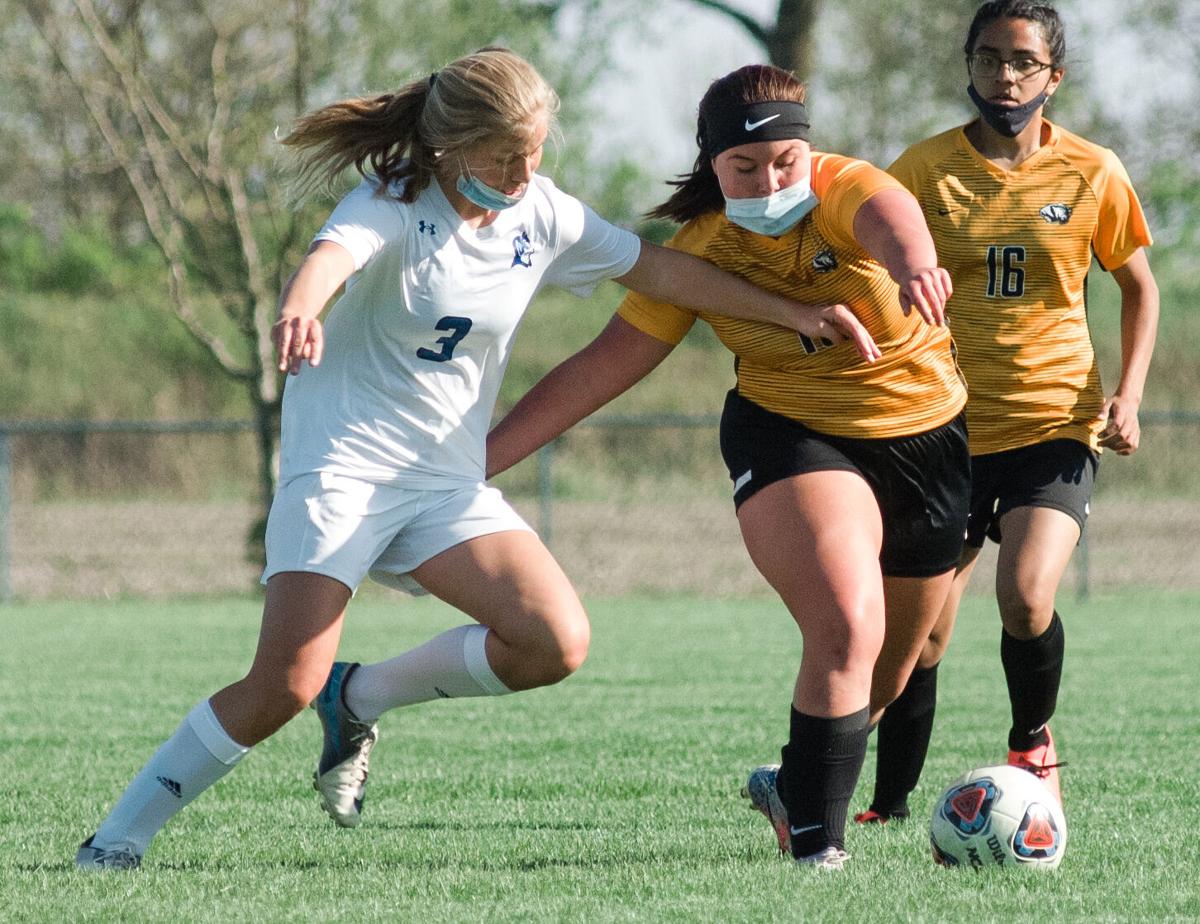 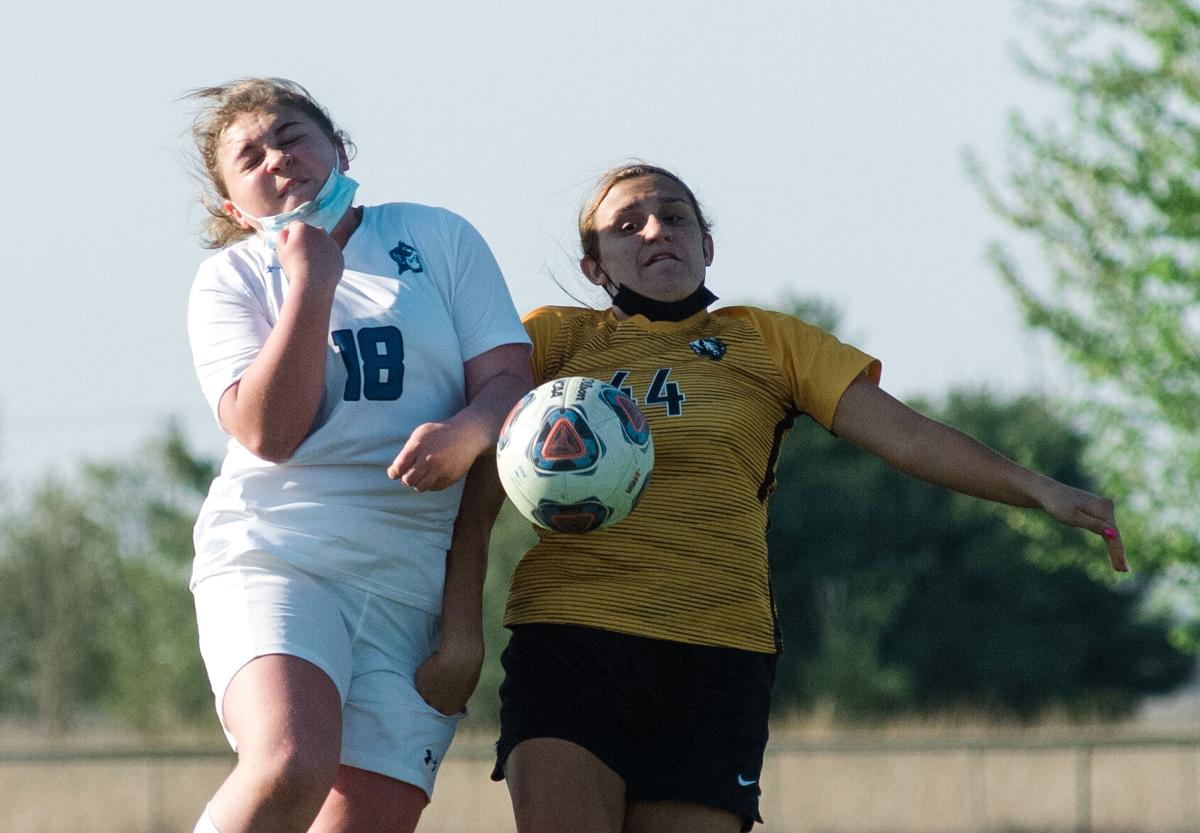 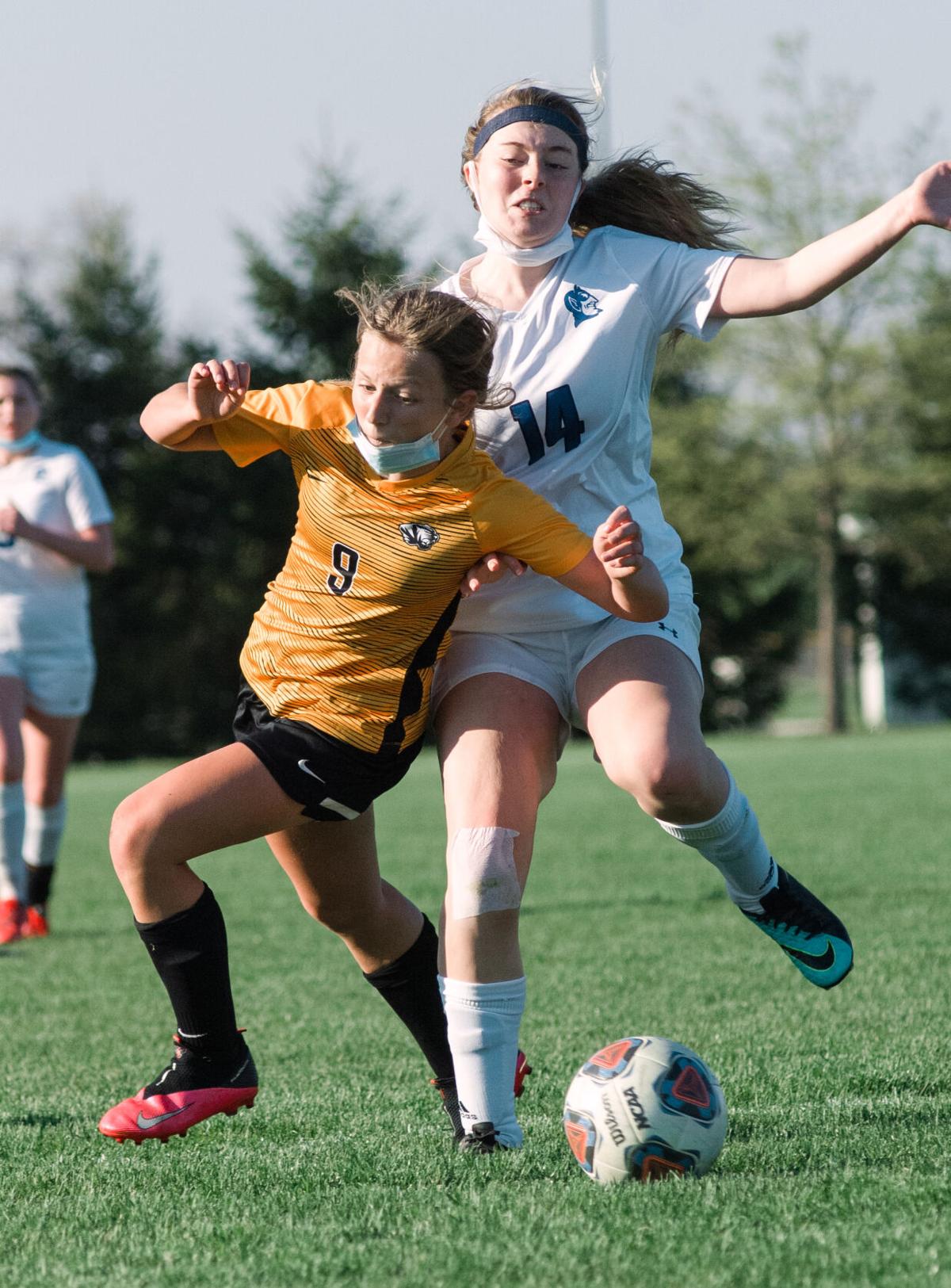 Herscher High School's Katelyn Borschnack, left, is fouled by Peotone High School's Mikayla Moore, right, as she tries to get a shot on goal during Friday's game in Herscher. 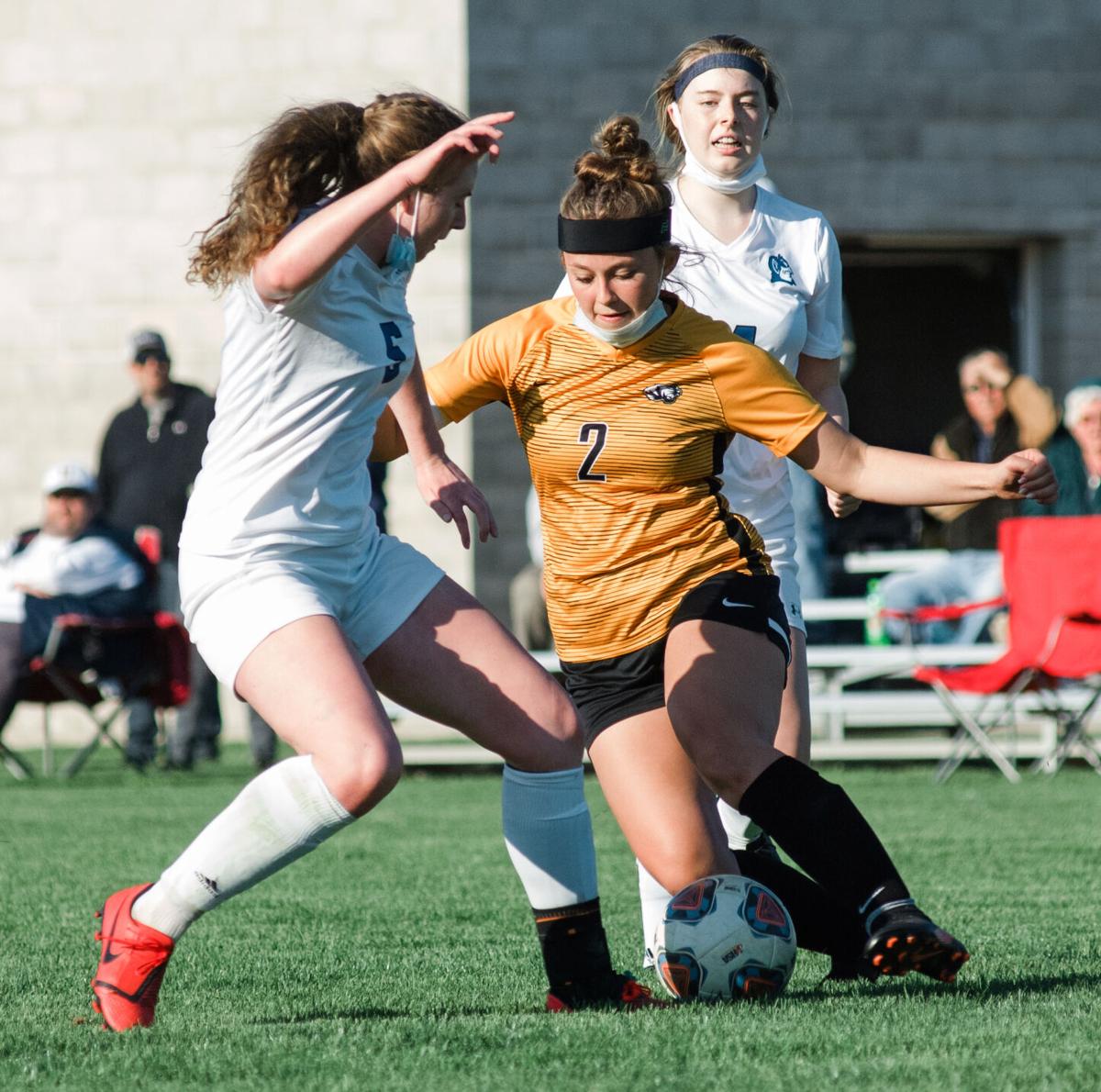 Herscher's Jalynn Miner (2) congratulates Katelyn Borschnack after she scored on a play during Friday's game against Peotone.

Herscher High School's Katelyn Borschnack, left, is fouled by Peotone High School's Mikayla Moore, right, as she tries to get a shot on goal during Friday's game in Herscher.

HERSCHER — Two of the top girls soccer teams in the Illinois Central Eight met Friday evening in a battle to remain atop of the conference.

Peotone (2-0) traveled to Herscher (4-0), where they looked to hand the Tigers their first loss of the season, but they ended up short in penalty kicks after both teams ended regulation in a 2-2 tie.

And it was the Tigers who stood tall in penalty kicks to improve to 5-0.

“I wasn’t too worried about our PKs because I knew they would be on frame,” Tigers coach Chris Longtin said. “It was just going to be a matter [of] if they hit the back of the net.”

Both teams started by sinking their first two penalty kicks to put things at 4-4. Herscher’s Katelyn Borschnack and Elise Kukuck sunk each of their attempts only to be matched by Peotone’s Ashley Renwick and Madison Schroeder. After the perfect 2-for-2 starts by each squad, the Tigers went up a goal after Ally Meyer hit pay dirt after a high miss by the Blue Devils.

Both squads then missed each of their next attempts before Peotone’s Adeline Graffeo tied things back up.

That’s when Alynn Jackson went up to the strike for Herscher with the game on the line. She ended up hitting the back right net to seal a Tigers victory to remain undefeated (5-0).

“I was very stressed out heading into my penalty kick,” Jackson said. “In my mind, I was like, ‘I can’t let my teammates down.’ So, I just gathered myself and focused, and thankfully it went in.”

Although Herscher ended up pulling out the tight win against Peotone, the Tigers weren’t always in control. Despite putting seven shots on goal in comparison to Peotone’s two in the first half, it was the Blue Devils who wound up taking a 1-0 lead at halftime. Freshman Emma Iozzo scored the match’s first goal five minutes into the contest off a great assist from a corner kick.

“I feel like we came out and struck right away, which was really good for us,” Blue Devil coach Justin Meyers said. “After that, it was tough because it was a physical game. Herscher did a good job controlling the pace at times, which led to them getting more shots than us.”

The relatively low-scoring first half didn’t seem to translate in the second half as both teams combined for three goals before they were forced to head into penalty kicks.

Borschnack put the Tigers on the board with the team’s first goal at the 51-minute mark to tie things at one apiece. Not too long after, Hailey King found Meyer on a great assist to give Herscher its first lead of the match with 18 minutes remaining in the second half.

It was around this point Herscher’s Jaylnn Miner and Peotone’s Mikayla Moore found themselves in a collision in Tigers territory, which ended up sending Moore to the hospital after an apparent concussion and neck injury.

“I honestly didn’t have a good view on the play,” Meyers said. “All I saw is that they collided. Obviously, we are praying everything is all right with Moore, and I look forward to getting in contact with her soon to make sure everything is OK.”

After about a 30-minute stoppage period to tend to Moore, play resumed. Not even a full two minutes out of the break, the Blue Devils found a way to tie things back up off a goal from Danielle Piper.

Piper’s goal couldn’t have come at a better time, given the freakish accident that happened moments earlier. It helped save Peotone’s chanced to force overtime, where they were out shot 4-3 in extra time to fall by one.

“We thought this would be a measuring stick to see where we are as a team because we are young,” Meyers said. “It was a good game to watch, and I’m proud of the way my girls competed.”

Meyers and Borschnack led the Tigers with two goals each. Rourke Zigrossi and Jackson also scored on penalty kicks.

Iozzo, Graffeo, Piper, Schroeder and Renwick all notched one goal each to round out the Blue Devils’ high-scoring affair.