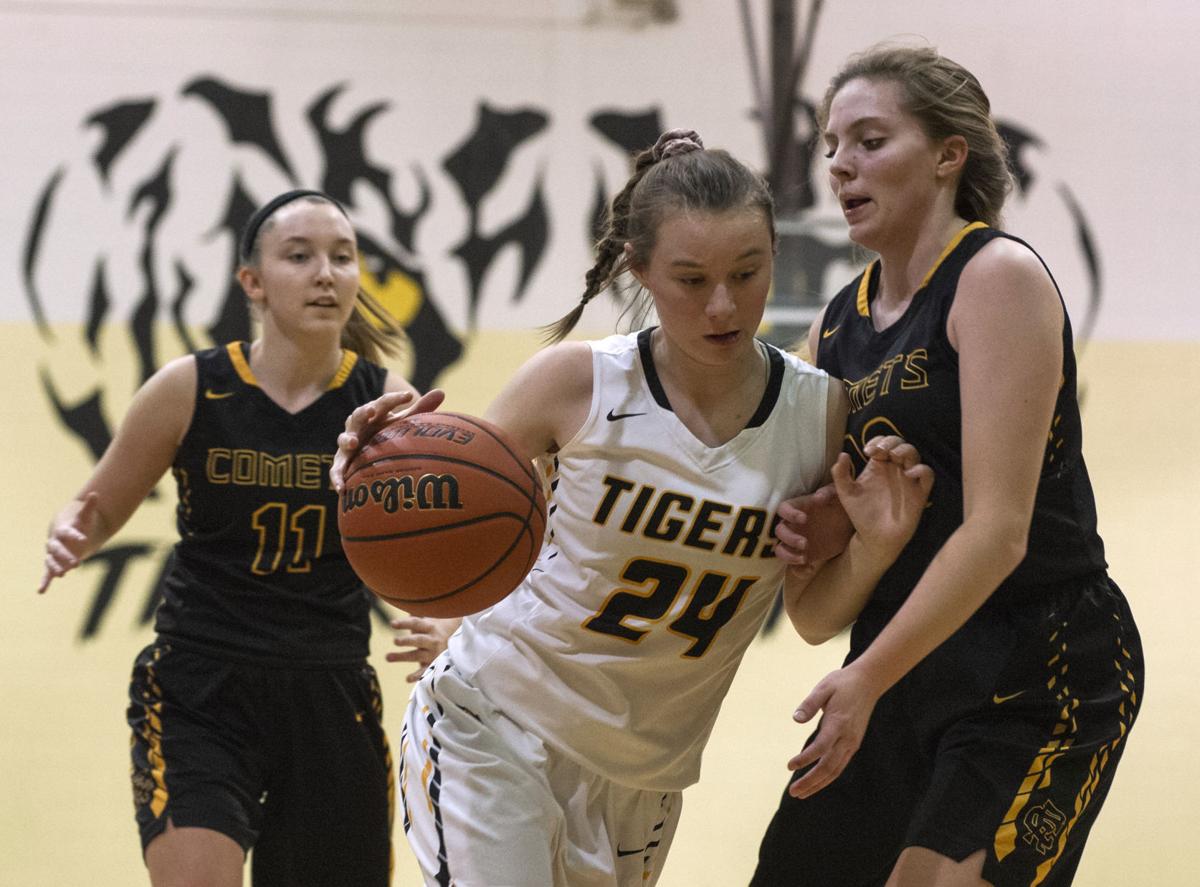 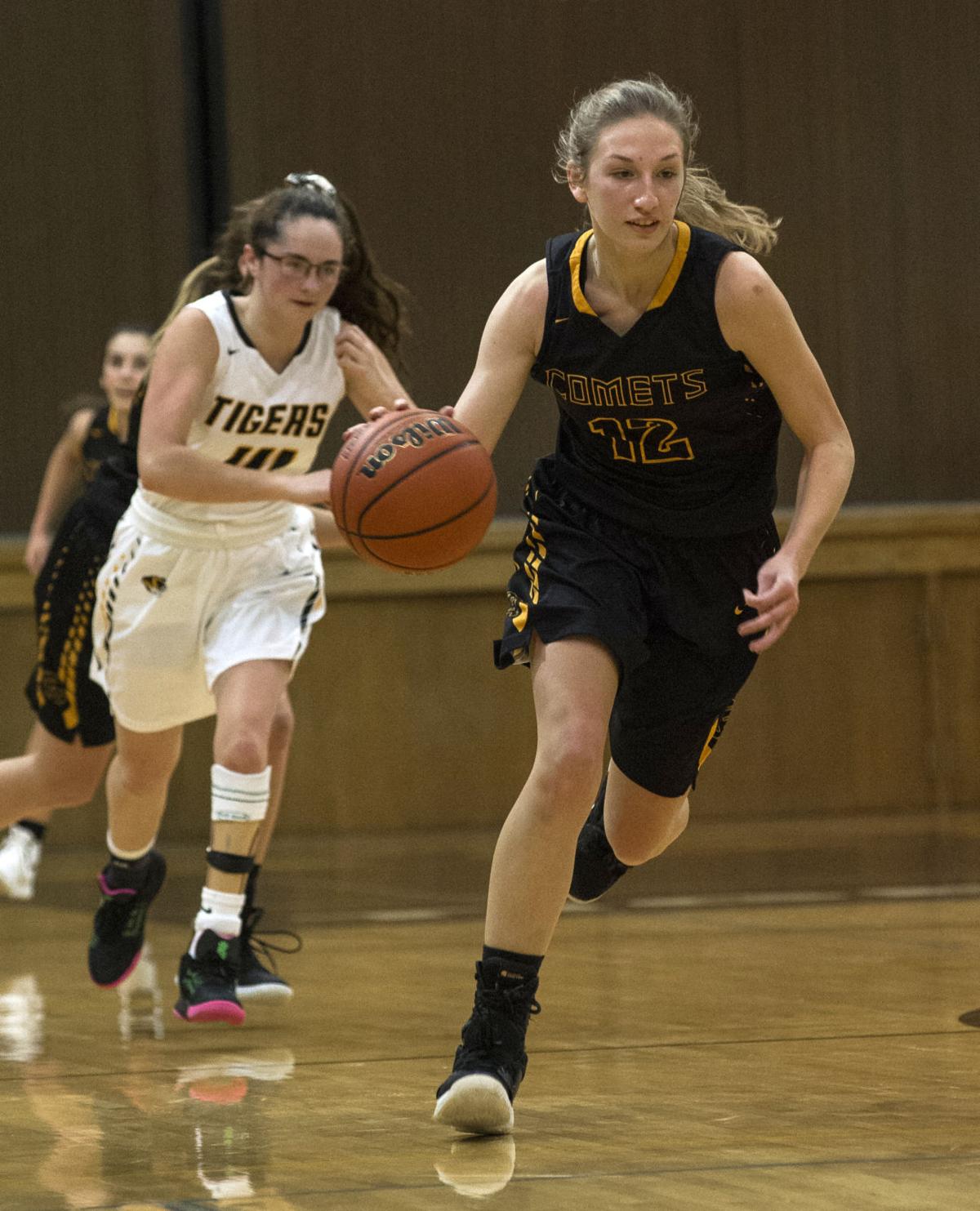 Reed-Custer's Jaden Christian controls the ball on a breakaway during Monday night's game at Herscher. 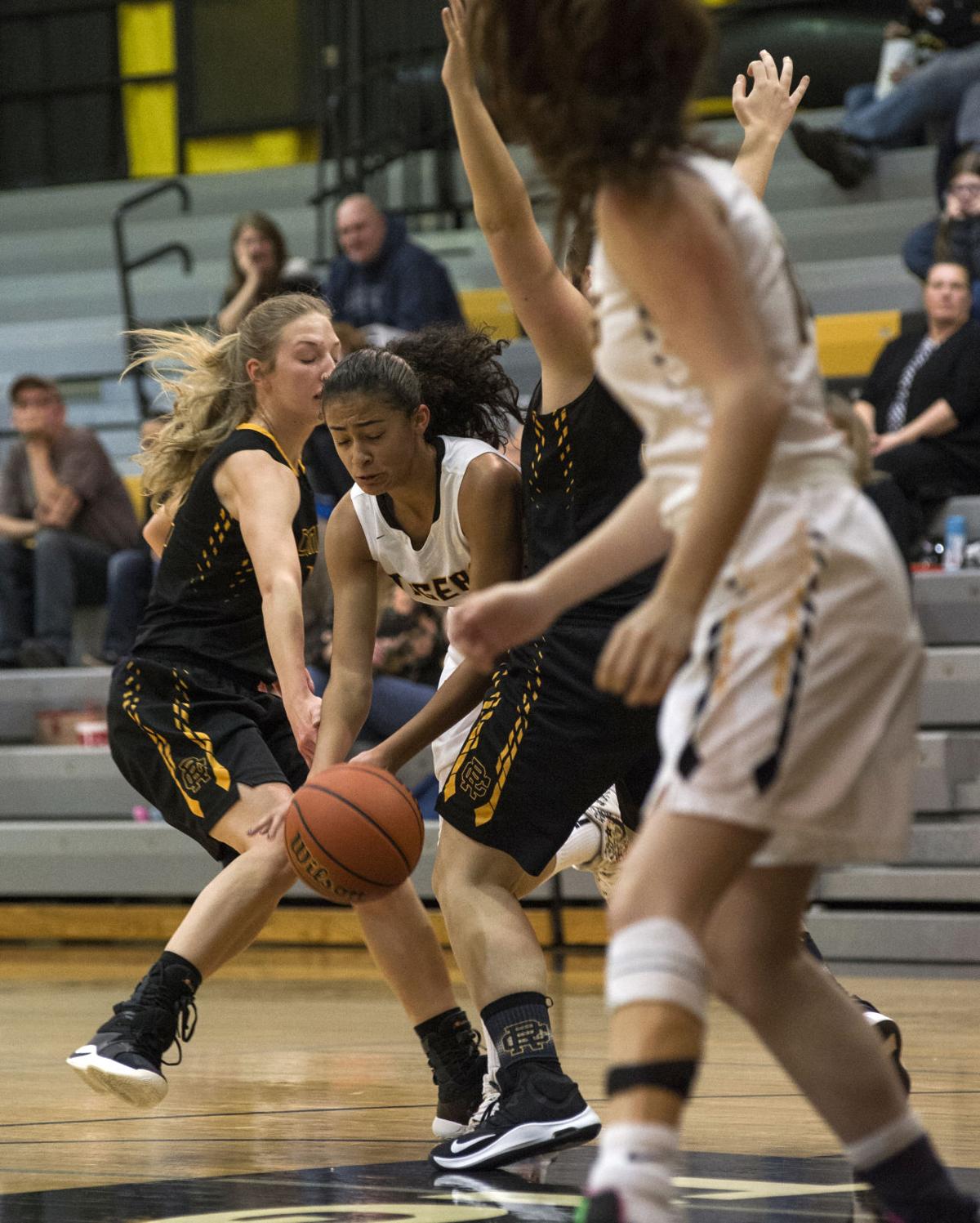 Herscher's Macey Moore, center, is stopped by Reed-Custer's Maddie McPherson, right, and Jaden Christian, left, as she tries to move the ball toward the net during Monday night's game in Herscher. 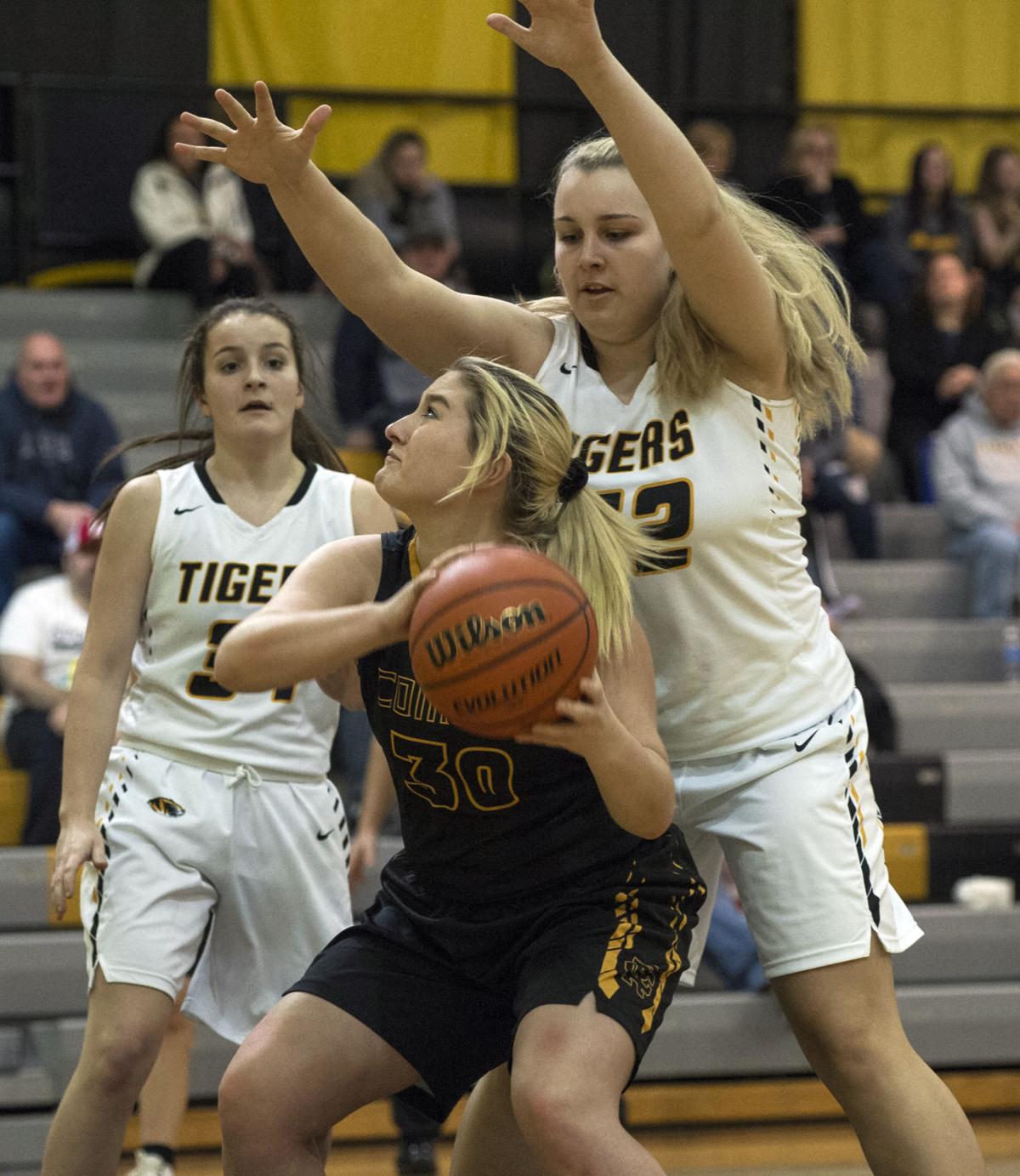 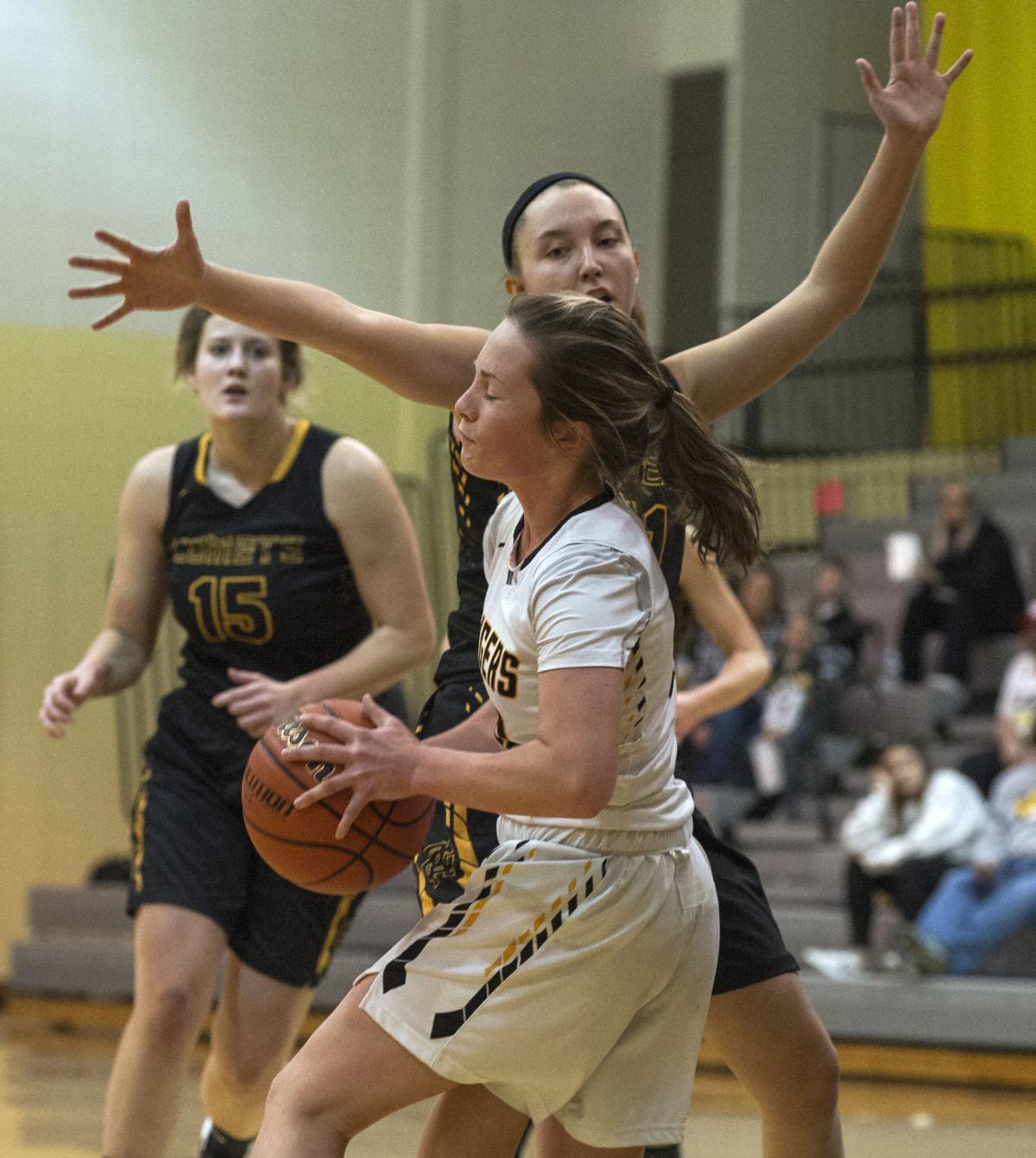 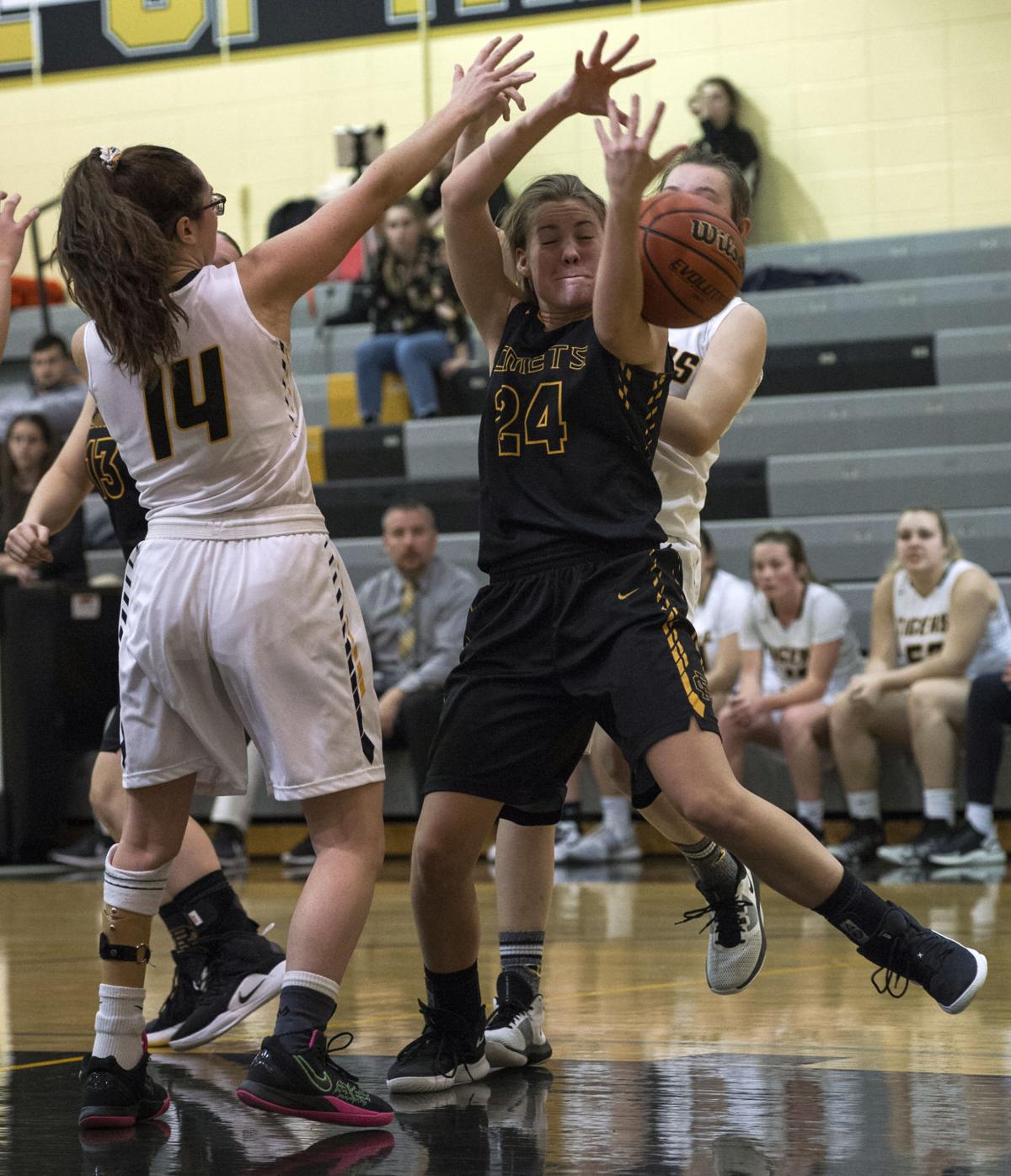 Reed-Custer's Jaden Christian controls the ball on a breakaway during Monday night's game at Herscher.

Herscher's Macey Moore, center, is stopped by Reed-Custer's Maddie McPherson, right, and Jaden Christian, left, as she tries to move the ball toward the net during Monday night's game in Herscher.

Special to the Daily Journal

HERSCHER — At no point in their dominant 55-20 road win Monday in Herscher did Reed-Custer have fewer than twice as many points as the Tigers.

The Comets held Herscher to just two points in the first quarter to establish a healthy lead from the get-go, then only got stronger as the game progressed. They closed the Illinois Central Eight Conference rout by holding the Tigers completely scoreless in the final frame and improved their conference standing to 7-2 and their overall record to 14-9 on the season.

The only sign of life from the Tigers came in a respectable, 12-point second quarter, thanks mostly to a trio of 3-pointers, but their offense was all but nonexistent aside from that flurry of long-range scoring.

The victory is Reed-Custer’s second of the season against the Tigers in Herscher — they picked up a 51-35 win at the end of November. The biggest difference between the two contests was the absence of Herscher’s star forward Mya Johanson, who was out of commission with an injury for round two.

“We held them to six points in the second half, so defensively that was exactly what we wanted to end up happening,” said Comets coach Nick Klein. “They’re down Johanson, and we understand that she changes the game so much, but we have to come out of the gate strong anyway, and I think we did that pretty well today. It was just that little lull in the second quarter that stood out as something to work on.

“In the past, we’ve been one- or two-girl heavy in the scoring department, but this year on any given night, we don’t run set plays to any specific girl. It’s more about moving the basketball to the open person. I thought we did an excellent job of that today,” he added. “I don’t really care who is shooting it because I have confidence in everyone. I was really pleased with the way we executed today.”

Daniele Cherry and Jaden Christian led the way for the Comets offensively in the win. Cherry was red-hot in the early going, knocking down four 3-pointers on the way to 16 points int he win, while Christian made her presence felt by slashing to the bucket and drawing a number of fouls with her aggressive play.

Christian wrapped things up with a game-high 19 points for Reed-Custer. She shot an excellent 5 for 6 from the line and wreaked havoc in the passing lanes to force turnover after turnover from the flailing Tigers’ offense.

Aside from Christian and Cherry’s offensive contributions, the Comets received a similar level of production from Abrey Ricketts despite the junior guard only scoring three points. Her do-it-all style allowed her to have a big effect for Reed-Custer on both ends of the floor and had a hand in every play, thanks to her high-effort performance.

“She has really turned it on for us, and right now she is just a do-everything player. For her size, she’s the best rebounder on the team both offensively and defensively, and she is just so strong physically,” Klein said of Ricketts. “She has really learned the pace of a varsity game, and she has just been absolutely huge for us. Not having Kelsi Dillon tonight, who is out with a concussion, Abrey had to play a lot of minutes, and I’ll tell you what, she really did a whole lot with them.”

The conference victory keeps the Comets in the hunt with upcoming matchups with Lisle and Peotone, who sit ahead of them in the standings at 7-0 and 6-1, respectively.

The Comets host Beecher at 7 p.m. Wednesday for a pivotal nonconference tilt. The Tigers have the week off before they host Manteno at 7 p.m. Monday.