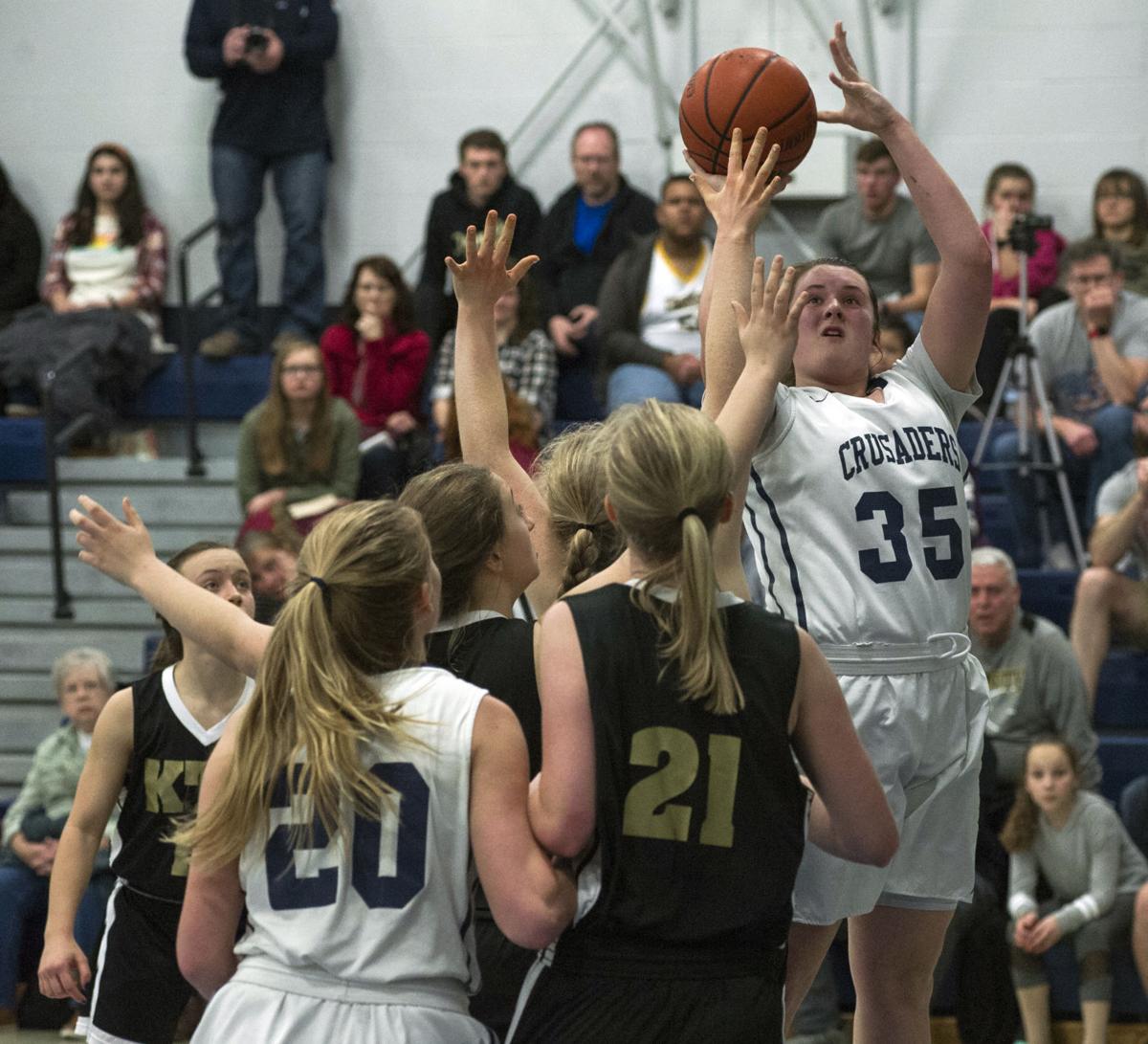 Grace Christian's Alexa Doty gets an open shot during Thursday night's game against Trinity Academy. The Crusaders improved to 11-0 with a 29-24 home victory. 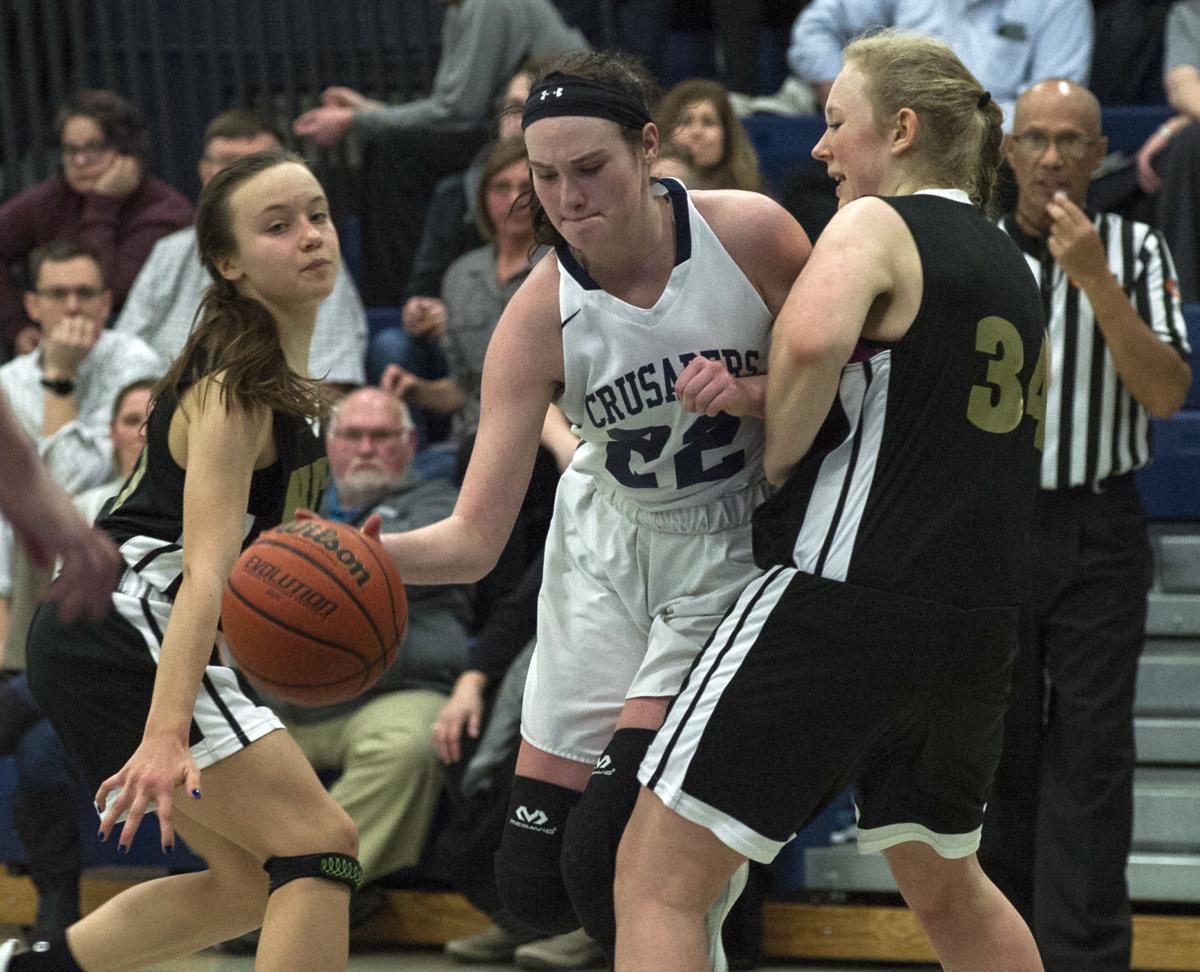 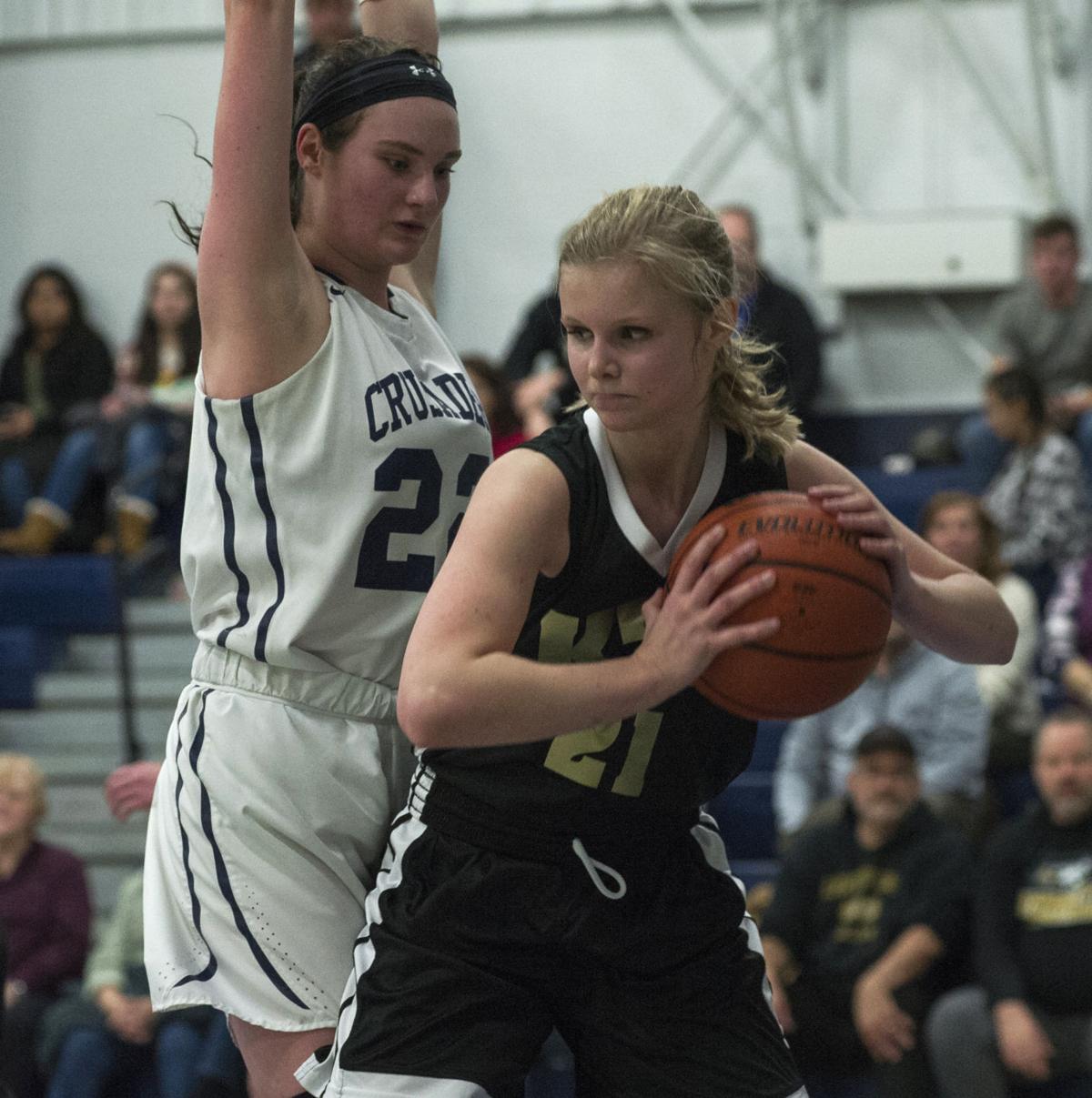 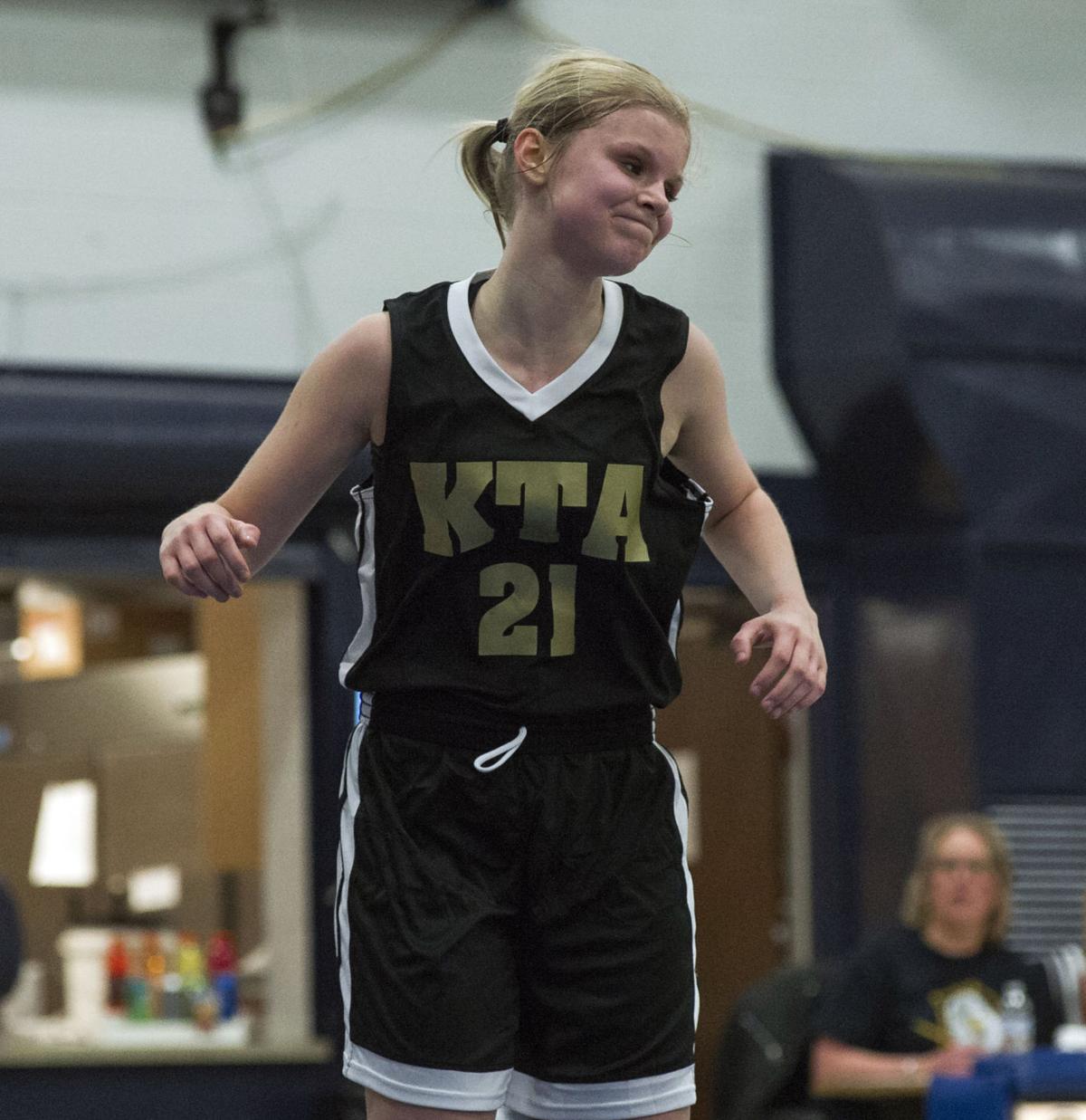 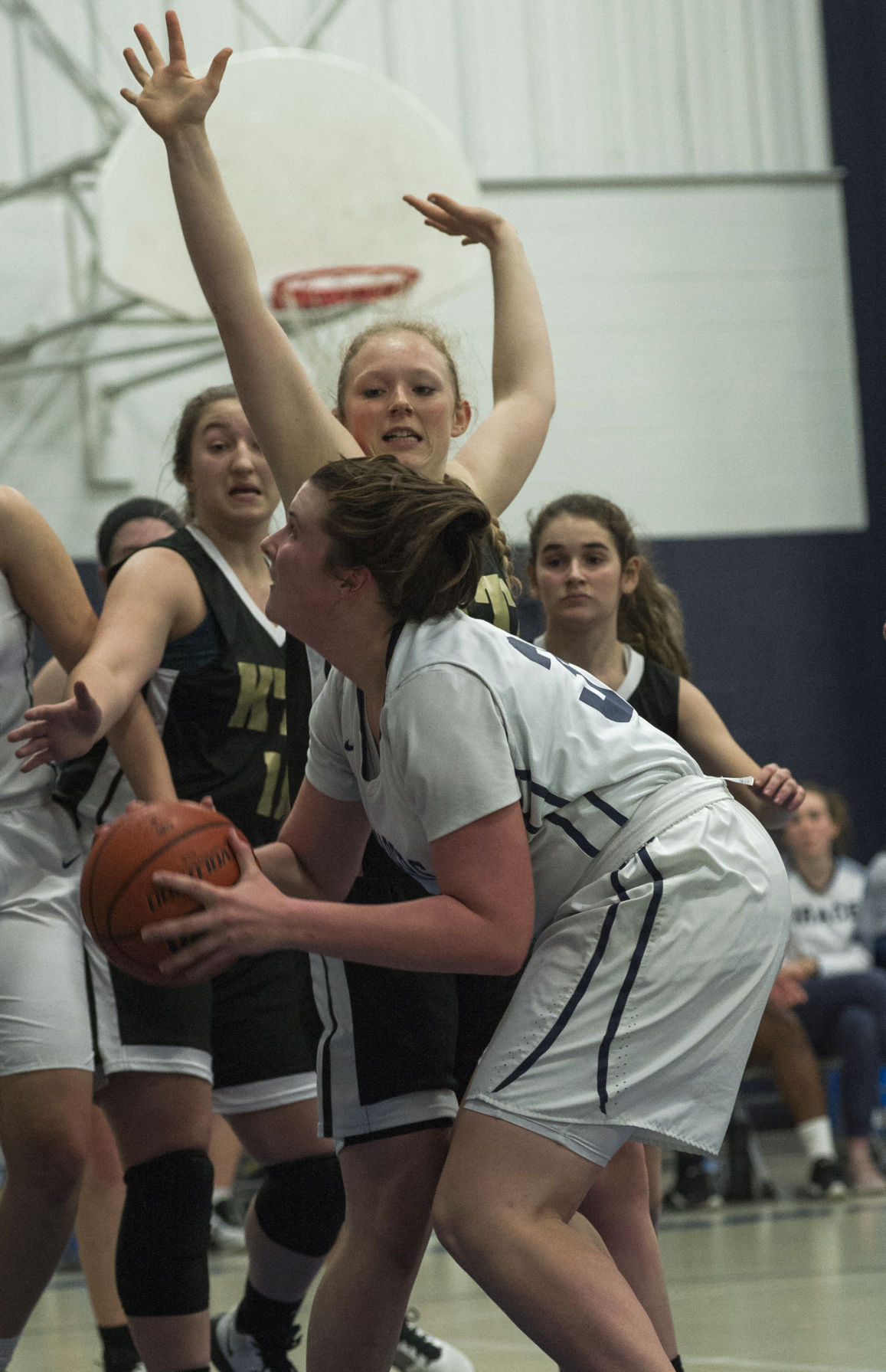 Grace Christian's Alexa Doty gets an open shot during Thursday night's game against Trinity Academy. The Crusaders improved to 11-0 with a 29-24 home victory.

KANKAKEE — When a rivalry on the magnitude of crosstown rivals Grace Christian and Trinity comes together, as it did at Grace on Thursday night, the preconceived notion of records being tossed out is true, including the perfect record the Crusaders took into Thursday night’s tilt.

The Crusaders’ spotless record remains intact at 11-0, although it certainly was challenged, after a 29-24 win against the Eagles.

Grace did just enough to fend off the Eagles in the second half, even as guard Reilly Dersien picked up the pace for Trinity. Though the Eagles flirted with a comeback a handful of times down the stretch, the final deficit of five points was as close as they ever got, thanks to a buzzer-beating 3-pointer from Dersien to bring the final score to 29-24,

No Crusaders player had much of an individual effect offensively, but the team’s performance was just well-rounded enough on offense to reap the rewards of its excellent play on defense. Abby Sanford and Alexis Doty scored eight points apiece in the win.

“It was an ugly win, but I’ll take it. We couldn’t score to save our lives, but the defense stepped up big time,” said Grace Christian head coach Chris Gnandt. “Fundamentally, there were a few things we could have done better. [Dersien] is a good ball player, and we lost track of where she was a few times and let her split the defense when we had her trapped on the baseline. Small things like that we need to work on.”

Despite those small mistakes, however, the Crusaders handled the Eagles’ leading scorer extremely well in the victory. Though Dersien finished with a game-high 15 points, only two of those came in the first half. Her silence allowed the Crusaders to erect their first-half advantage, which was enough to outlast the Eagles in the end.

“It’s always a big one [against Trinity], but we’re going to see them again on Tuesday,” Gnandt said. “We know how each other play and what our strengths and weaknesses are, so we’ll see how that goes.”

Before the two teams reignite their rivalry at Trinity on Tuesday, both teams are back in action today. The Crusaders will look to extend their season-opening winning streak to a dozen at home against Home School Resource Center at 5 p.m. Trinity plays at home against Westlake Christian at 6:15 p.m.

After suffering their first loss of the season during the weekend, the Eagles quickly rebounded to improve to 17-1 with a thumping of their crosstown rivals by getting out to an early 25-5 lead after a quarter and sailing the rest of the way.

Eagles coach Mike Lawrence hailed his team’s ball control and their abilities on the boards, as well as the winning environment, for the quick bounce-back.

“We moved the ball well tonight and didn’t have many turnovers,” Lawrence said. “I thought we rebounded as a team much better this game.

“The culture within our program got us headed back in the right direction tonight.”

Both teams are back in action today. The Crusaders (2-10) host Home School Resource Center at 7:30 p.m., and Trinity hosts Westlake Christian at 7:45 p.m.