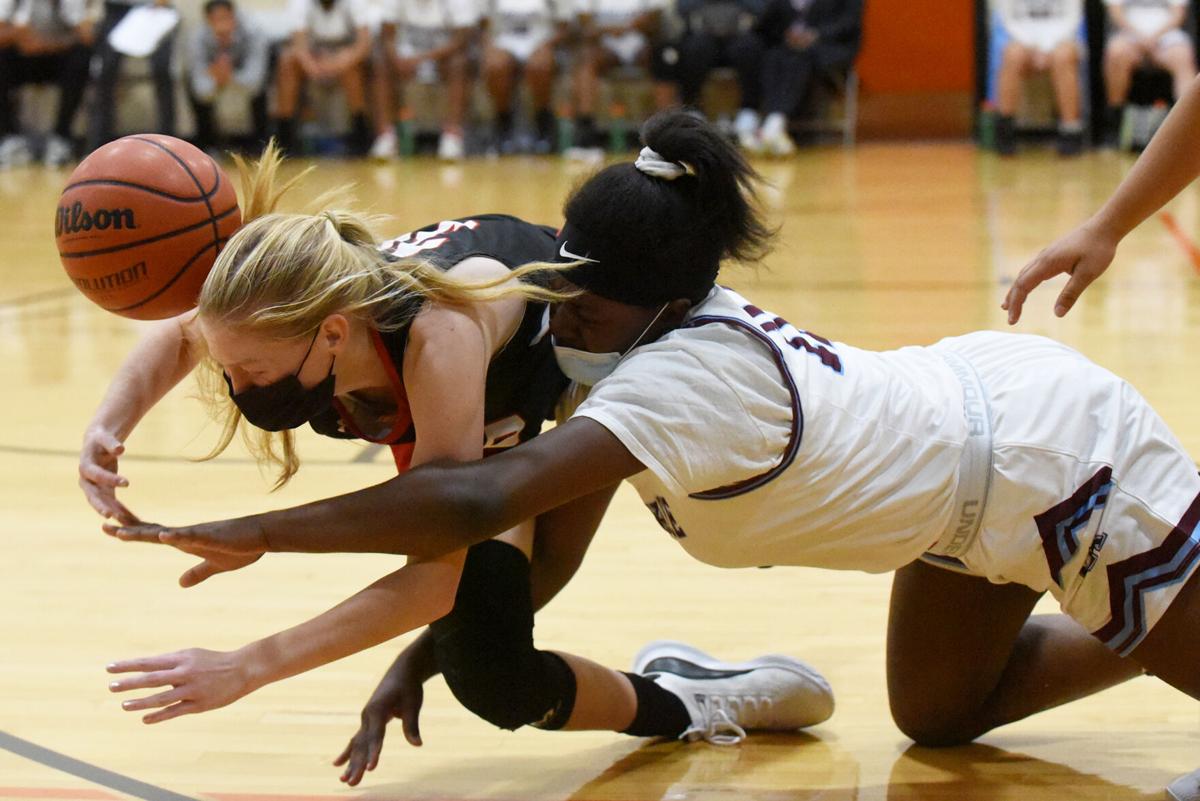 Bradley-Bourbonnais’ Emmie Longtin, left, reaches for a loose ball alongside Kankakee’s Nikkel Johnson during Thursday’s game at the Beecher Ladycat Fall Classic. The Boilermakers held on in a physical battle for a 37-32 victory. 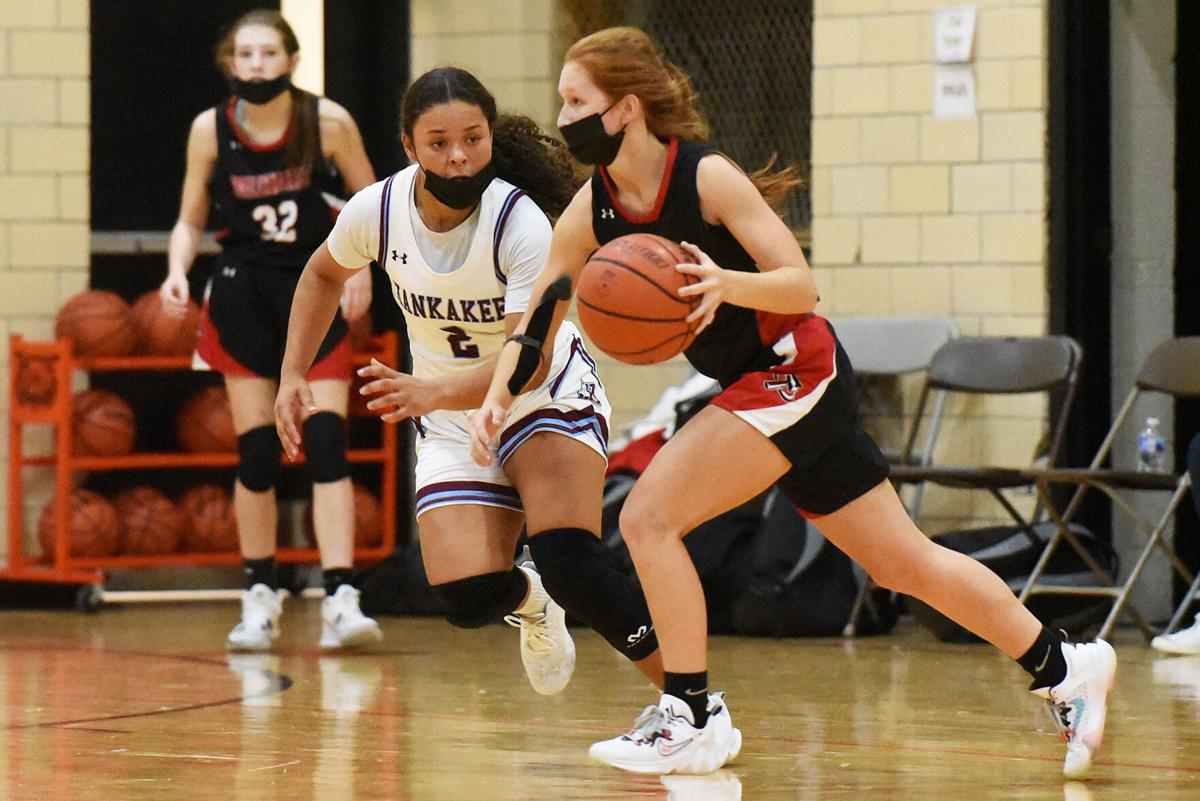 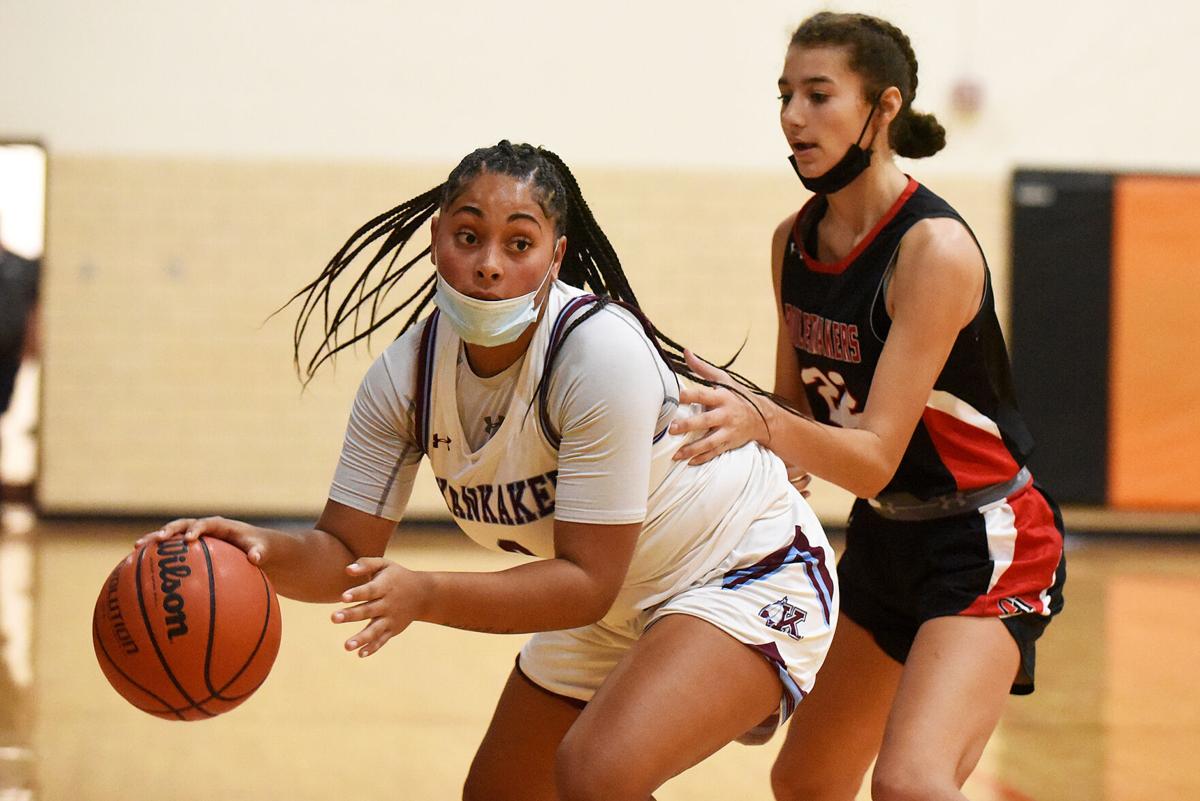 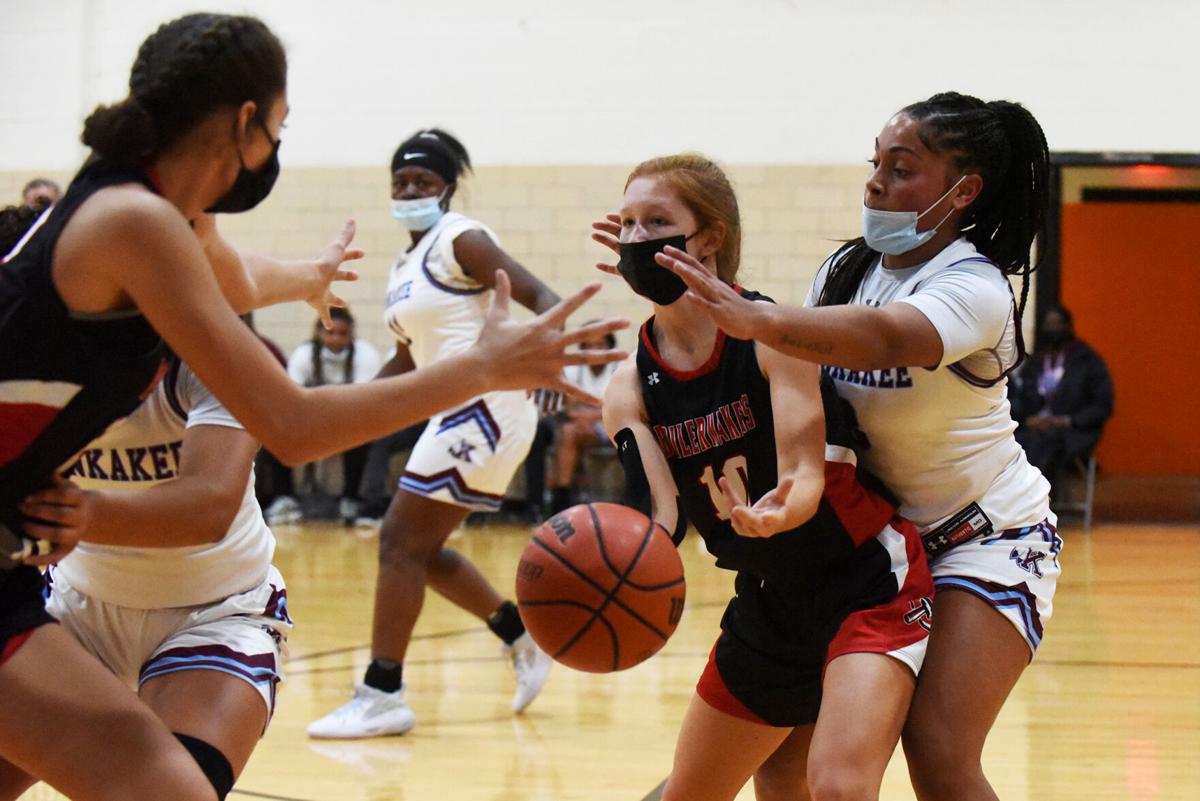 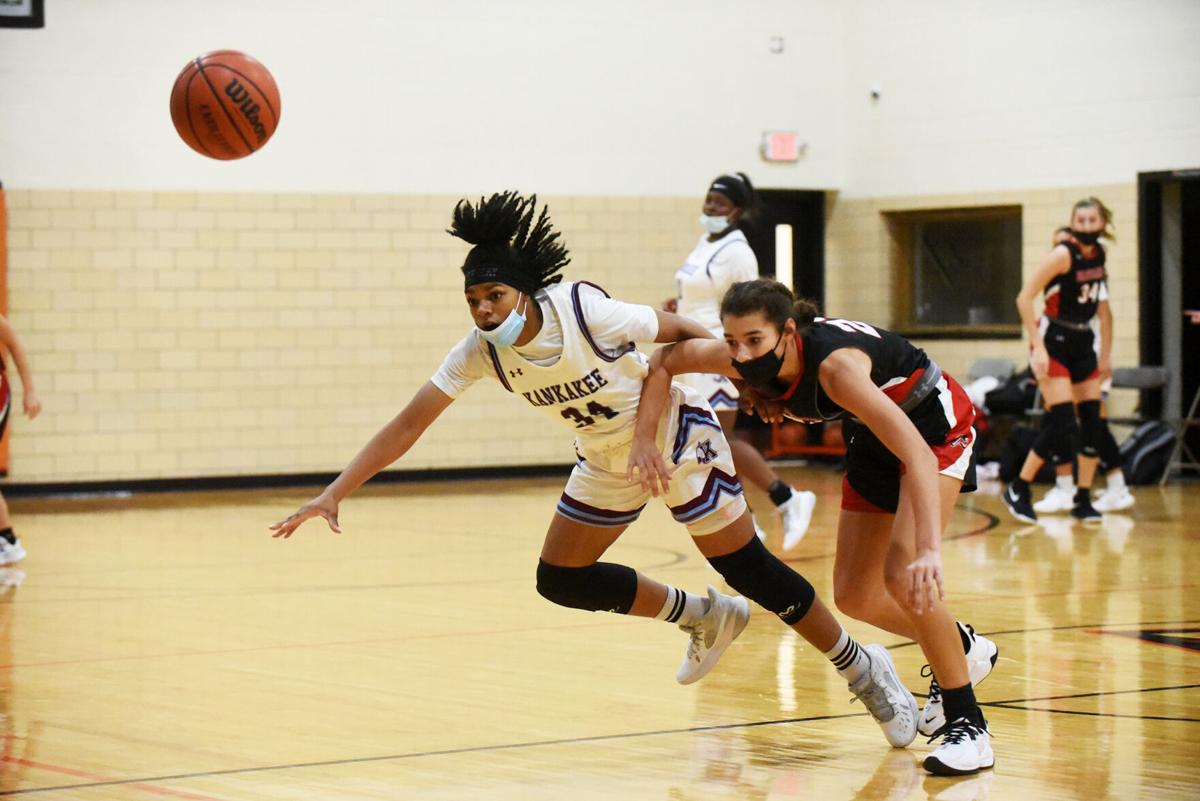 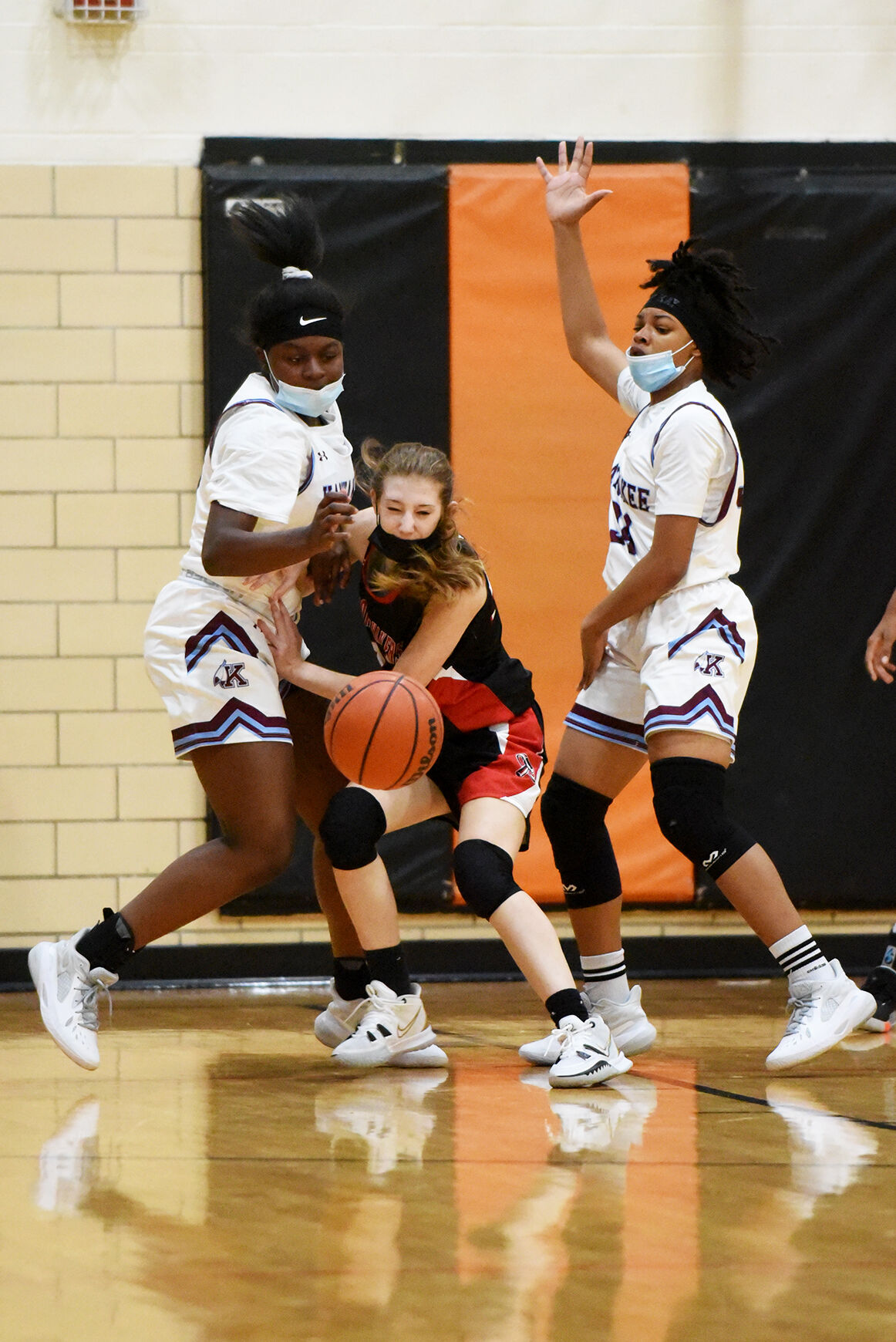 Bradley-Bourbonnais’ Emmie Longtin, left, reaches for a loose ball alongside Kankakee’s Nikkel Johnson during Thursday’s game at the Beecher Ladycat Fall Classic. The Boilermakers held on in a physical battle for a 37-32 victory.

BEECHER — As most early season basketball games do, as teams get their feet underneath them and figure out their offenses, Friday night’s All-City matchup at the Beecher Ladycat Fall Classic between Bradley-Bourbonnais and Kankakee came down to grit, tenacity and defense.

And by the end of the fourth quarter, which felt more like the end of the 12th round of a heavyweight boxing match, it was the Boilermakers who stood tall.

Only faced with a deficit of one-point for less than 30 seconds, Bradley-Bourbonnais forced three early Kankakee turnovers to jet out to an 8-2 lead to open a game, a lead they largely held on to in a 37-32 victory over their rivals, giving them a 3-0 start to the season and solidifying their spot against Providence in Tuesday’s tournament championship.

“I’m not a crier and I cried after that game, so I think there’s something to be said about these girls and their fight,” second-year Boilermakers coach Liz Swindle said. “We didn’t have much time to work on or improve on anything from the first two games, so it was just that will to win — bodies on the floor, girls yelling on the bench, that’s what our team culture is all about.

“It took every one of them tonight and the girls played their hearts out.”

After Nikkel Johnson caught fire and scored all 10 Kankakee points in a first quarter that saw them trail 12-10 at the end of it, Johnson scored the first bucket of the second quarter five minutes and 33 seconds into the second frame to cut the deficit to within a point at 13-12, but that was the only bucket the Kays scored in the second frame, as they took to the half trailing 18-12.

Kankakee coach Kurt Weigt, who credited the Boilermakers for their own smothering defense, was pleased with the effort his girls gave on the defensive and offensive ends, despite the difficulties to consistently find the bottom of the net.

“I think from the defensive standpoint, if you hold someone to under 40, that’s our goal and we should win a lot of games if we can do that, but they played well and do some nice things,” Weigt said. “We didn’t shoot it particularly well...we missed a few shots inside, that if those go, there’s 10-12 points we left on the blocks.

“You cant control those things, but I thought we ran the offense to get quality shots, they just didn’t go in the basket sometimes.”

Despite their struggles against the Boilermakers’ stifling three-quarters court trap and other half-court offerings, the Kays managed to snag a brief lead on an Avery Jackson jumper with 6:27 remaining that put the Kays ahead 30-29.

But the Boilers got an immediate answer when point guard Tess Wallace found fellow senior Madison Kelly for a short jumper of her own that immediately put Bradley-Bourbonnais back ahead 31-30 before they scored six of the game’s last eight points.

Wallace’s seven points on the evening were third on the team, but it was their point guard’s play that kept the Boilers ahead all night in the eyes of their head coach.

“She does not get enough credit for what she does and I’ll say that every day,” Swindle said of her point guard. “She’s the heart of this team and why we run.

Wallace, who was eager to get back into All-City action after missing it last year, giving her head coach her own first All-City coaching victory in the process, had some advice for her younger teammates before the game who had not yet experienced such an intense matchup.

“I just wanted to let them know we needed to play as a team, move the ball around and hit the open girl,” Wallace said. “We’re playing for each other, not ourselves, and this is a big win for our school.”

The Kays have their final pool play game remaining at 10 a.m. against St. Laurence today in Beecher. The Boilermakers will await their championship game opponent at 7:45 p.m. in Beecher Tuesday.