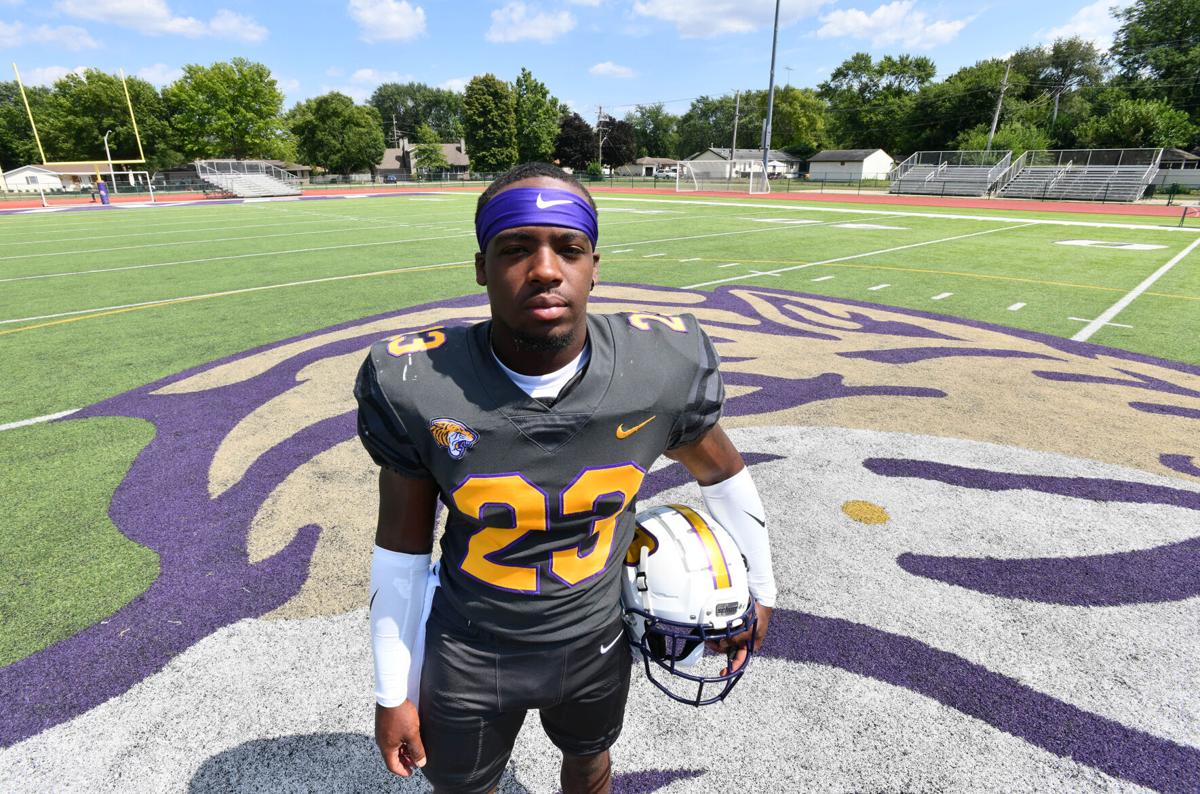 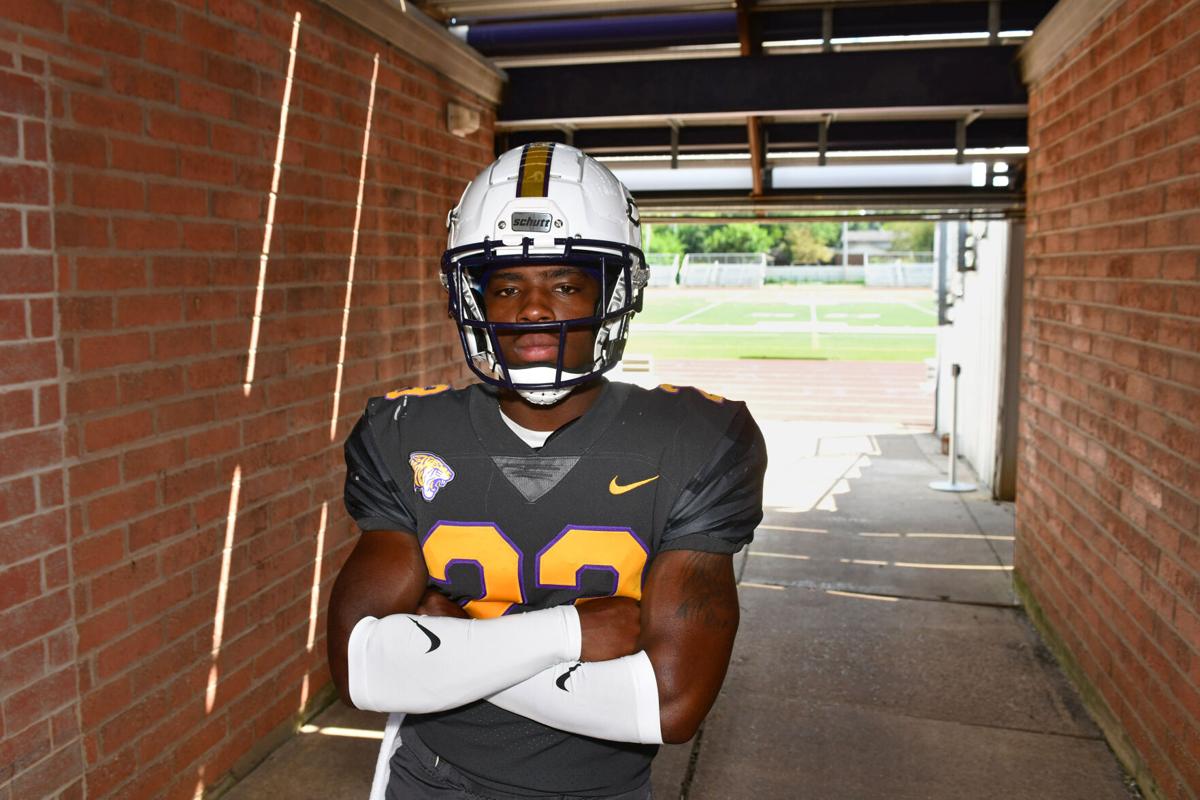 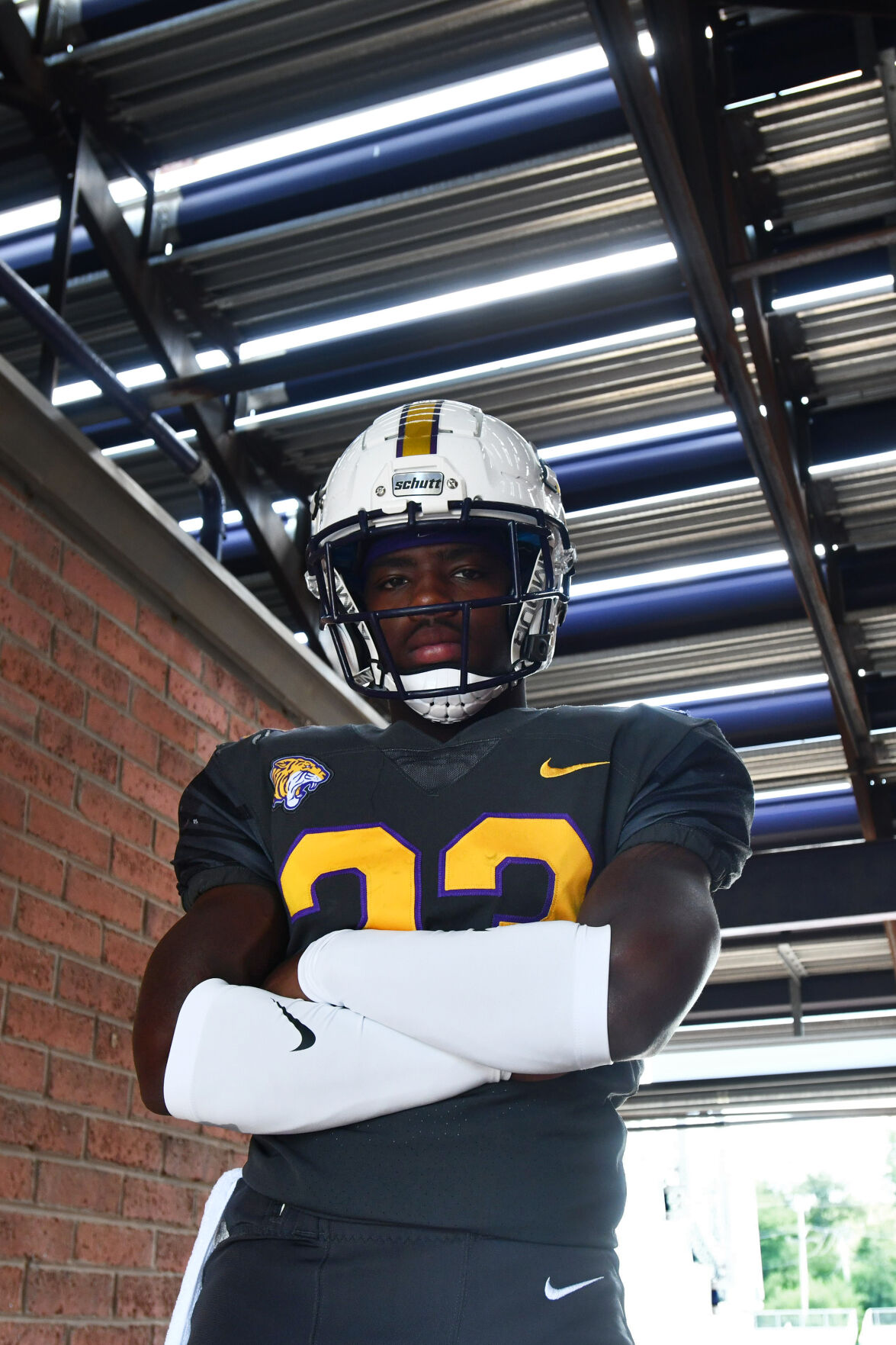 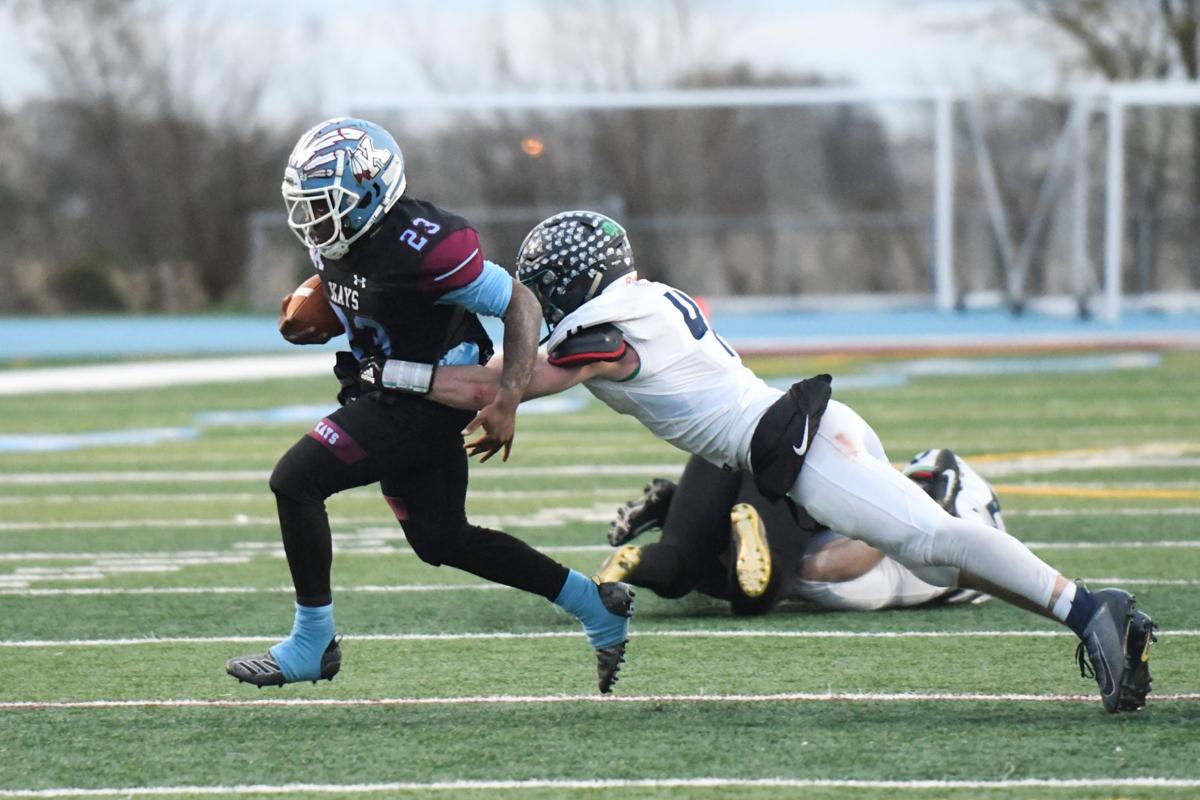 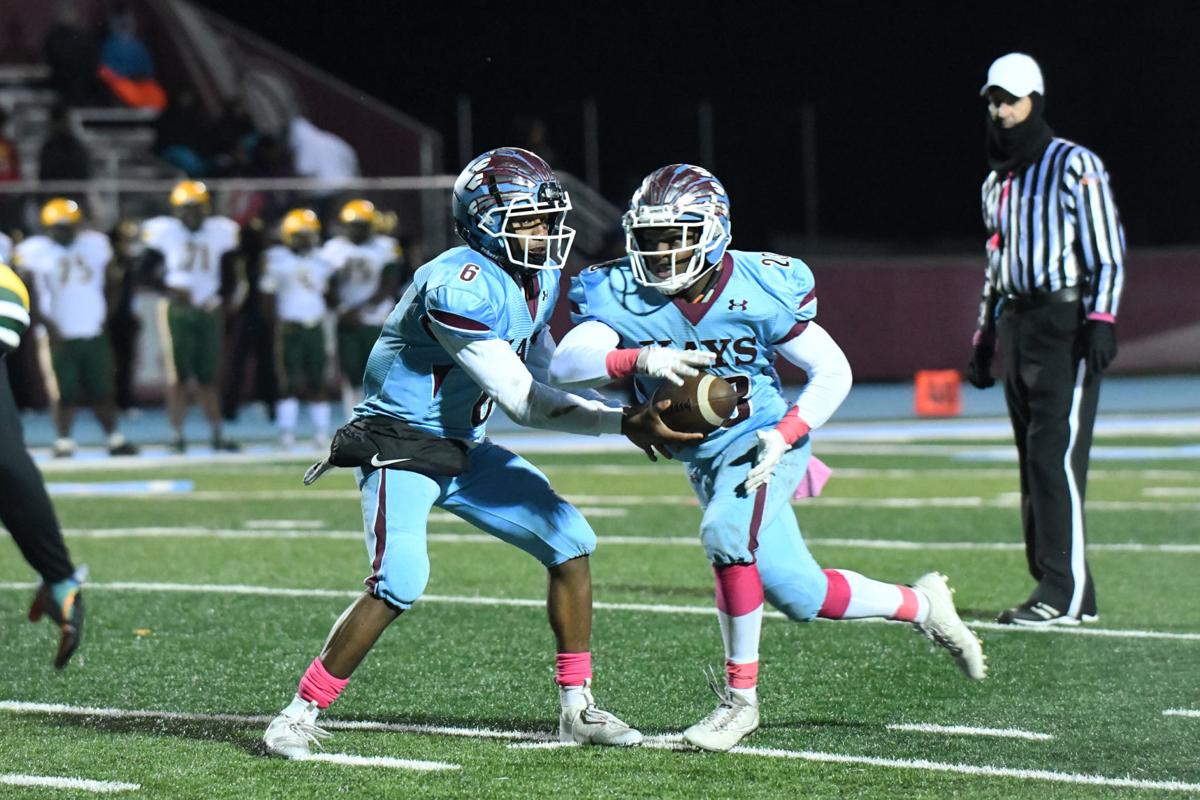 Kankakee quarterback Tyjuane Stewart hands off to running back Mattias Clark during a 2018 game.

Kankakee quarterback Tyjuane Stewart hands off to running back Mattias Clark during a 2018 game.

When most high-major college football players decide on a college, whether it be at Division I powerhouses like Alabama or Division III schools like Augustana, they usually commit ahead of time as scholarship athletes or walk-ons.

But former Kankakee standout running back Mattias Clark didn’t. By the time the summer before his freshman year started, the former Daily Journal All-Area selection and two-time Southland Athletic Conference rushing leader still didn’t have a college to play at.

But after a year at Arkansas-Pine Bluff, a Division I FCS program, where he went from mega-late walk-on to week one starter, the shifty back is back in town, transferring to Olivet Nazarene University.

From homeschooled to home-grown talent

Growing up homeschooled by his parents, Pam and Aaron, Clark saw himself as an outsider on the Kays varsity squad while playing limited time as a sophomore as a nickel linebacker.

He felt that since he wasn’t getting the opportunity to spend time with his teammates through the day in class that he was often not accepted as much as the other guys on the team.

“I was kind of an outsider a bit at Kankakee High School playing football,” Clark said. “Everyone went to school together and got to enjoy that team camaraderie on a daily basis that I didn’t get to have while being homeschooled.”

It wasn’t until the 5-foot-6, 175-pound running back became the team’s main threat on offense during his junior and senior seasons where he combined for a total of 2,288 rushing yards with 29 scores on the ground that he felt completely accepted by his team. Nonetheless, even after leading the Southland Athletic Conference in rushing for the second year in a row during his senior campaign, when he ran for 1,132 yards and an eye-popping 20 rushing touchdowns while revitalizing Kankakee’s offense under first-year head coach Derek Hart in 2019, Clark never received one scholarship offer.

“I think part of the reason why he wasn’t heavily recruited was because of his size, since he’s not a really tall kid,” Hart said. “I feel like this area is very under-recruited and guys like Clark going off to do what he did only brings more eyes on us.

“You don’t want to be the school that screwed up and missed on a guy like Clark who went off to ball out as a walk-on.”

Luckily for Clark, the running back got connected with Kenny Tatum, a University of Arkansas-Pine Bluff graduate, the night of his senior night where Clark went off for touchdowns runs of 60, 2, 55 and 45 yards. His offensive explosion that night helped catch the eye of Tatum, who took him under his wing in a sense and eventually helped put Clark on to his former school.

After some individual research on the school, Clark went on to begin his college football career there playing running back as a preferred walk-on.

Although Arkansas-Pine Bluff’s football program was only 6-5 overall in 2019, Clark was intrigued about the possibility of joining the Golden Lions, given they were going through multiple coaching and roster changes, similar to the situation he went through as a Kay when they flipped their record from 4-5 overall to 9-2 overall between his junior and senior seasons when Hart first took over the at the helm.

“I felt like I could make a difference at Pine Bluff with all the other new incoming freshmen that went there with me,” Clark said. “That’s what intrigued me into going there as a preferred walk-on.”

Walking on to a Division I FCS football program like the Golden Lions wasn’t easy for Clark either, but through hard work and mentorship from Kankakee assistant football coach Sam Jordan during the summer of 2019, the running back was able to prepare himself to make the team, where he eventually went on to secure the starting running back job over Omar Allen Jr., by week one of the 2021 spring season that saw UA Pine Bluff go 4-1 overall and earn the Southwestern Athletic Conference West Division title.

“Sam Jordan helped push me everyday last summer to the point where I felt I was ready to go when I first headed to Pine Bluff,” Clark said. “He played a big part in me getting ready to walk on.”

Clark went on to rush for 173 yards (2.8 yards per carry) and two touchdowns on 61 attempts in five games played during his freshman campaign as a walk-on starter. And so given Clark’s ability to beat out all the other running backs on the Golden Lions depth chart as a freshman, the running back felt he deserved some respect by earning some sort of scholarship from the coaching staff following the team’s offseason exit meeting on May 3.

Instead, Clark was told he still needed to continue to work hard to possibly earn a scholarship sometime down the line, something he didn’t want to hear.

“I felt that after everything I accomplished over my freshman campaign I deserved at least a partial scholarship and our head coach [Doc Gamble] wasn’t budging on it,” Clark said. “At that point it wasn’t even about the money. I felt a little disrespected and disappointed and so I decided I’d just transfer.”

That feeling of disrespect ultimately led Clark to enter the transfer portal, and after weighing his options, he’s now set to join Olivet Nazarene University’s football program this upcoming season as a reclassified freshman under the NCAA transfer exception rule because of COVID-19, a rule that carries over to the NAIA, where the Tigers reside.

The decision to return home and join the Tigers came after a solid campus visit with ONU football coach Eric Hehman on June 9th.

“I felt like I had already earned 10 times more respect from coach Hehman in our visit this past June than I did being at UA-Pine Bluff for a whole year,” Clark said. “That’s pretty much what persuaded me to play here, along with the fact my family is here in town and so they can come out and watch me play.”

Clark is set to join newcomers Graham Johnson and Hollist Daniels of Bradley-Bourbonnais and returners players in Jeremy Gesky of Manteno and Damien Thornton of Bishop McNamara, making five former area players set to be on the 2021 roster.

“I love getting a local guy in Clark to add to the roster,” Hehman said. “We worked hard to recruit local guys, but a lot of them just want to end up leaving home.

“Now we have three local guys in this class alone and Clark is a big one,” he added. “We’re excited to get a guy from Kankakee and this area that will hopefully help us recruit a lot more area guys in the future.”

Last season the Tigers went 8-1 overall while averaging 39.4 points per game. And with the addition of Clark to an already explosive backfield consisting of Aaje Grayson, Max McClendon and quarterback David Hutton, the Tigers are full of high expectations, both inside and outside the program.

“I think we have a pretty talented offense coming back this year, and so I think it’s always nice to add another guy like Clark,” Hehman said. “I think we will have a pretty good stable of running backs and Clark will only make us better.

“We’ve been the No. 1 scoring offense the last few years in our conference [Mid-States Football Association], and so to add another player like Clark to that is a pretty big deal.”

Going into his sophomore campaign back in his hometown this upcoming fall, Clark plans to become a lot more dominant this season, similar to his times as a Kay, when opposing teams would specifically have to game plan for him.

“At this point in my career right now it’s pretty special to return home because people will be able to see me bounce back from everything I went through at Pine Bluff,” Clark said. “I will be able to have my family come out and give support, which will make me play better because I know I have so many people rooting for me.”