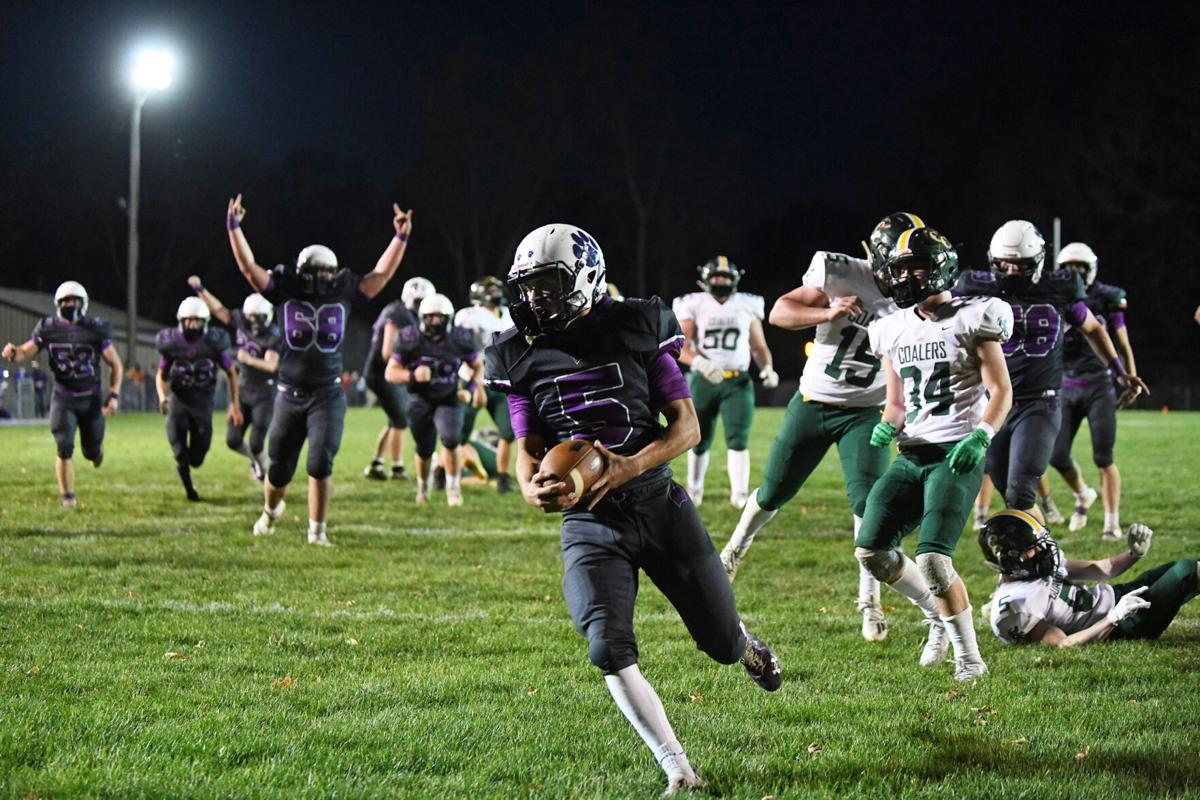 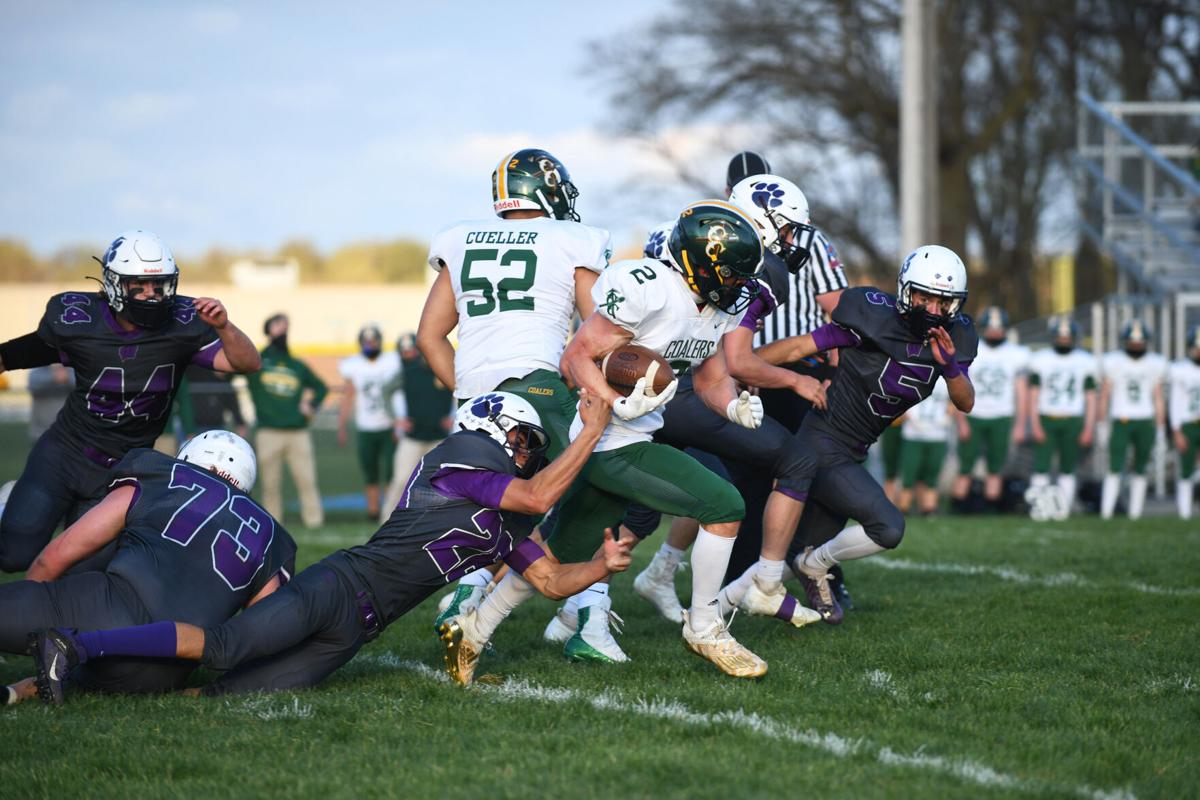 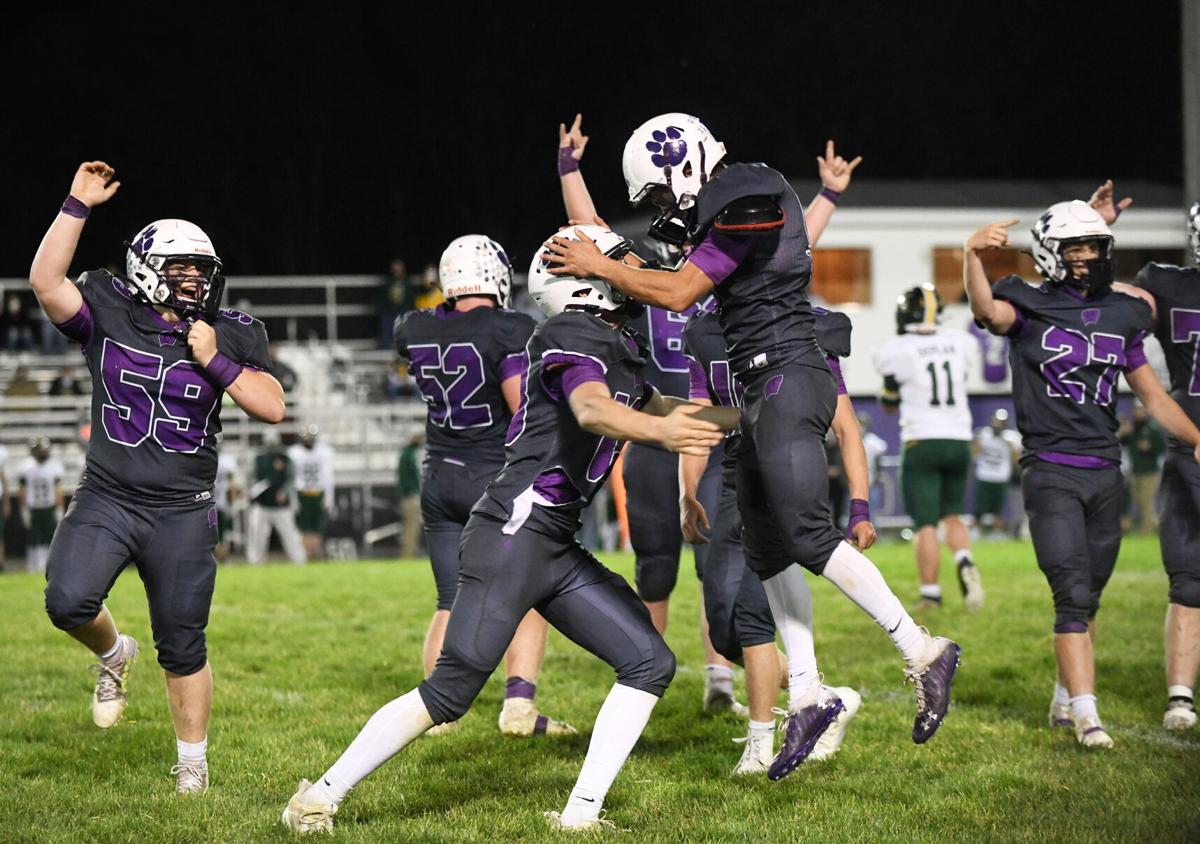 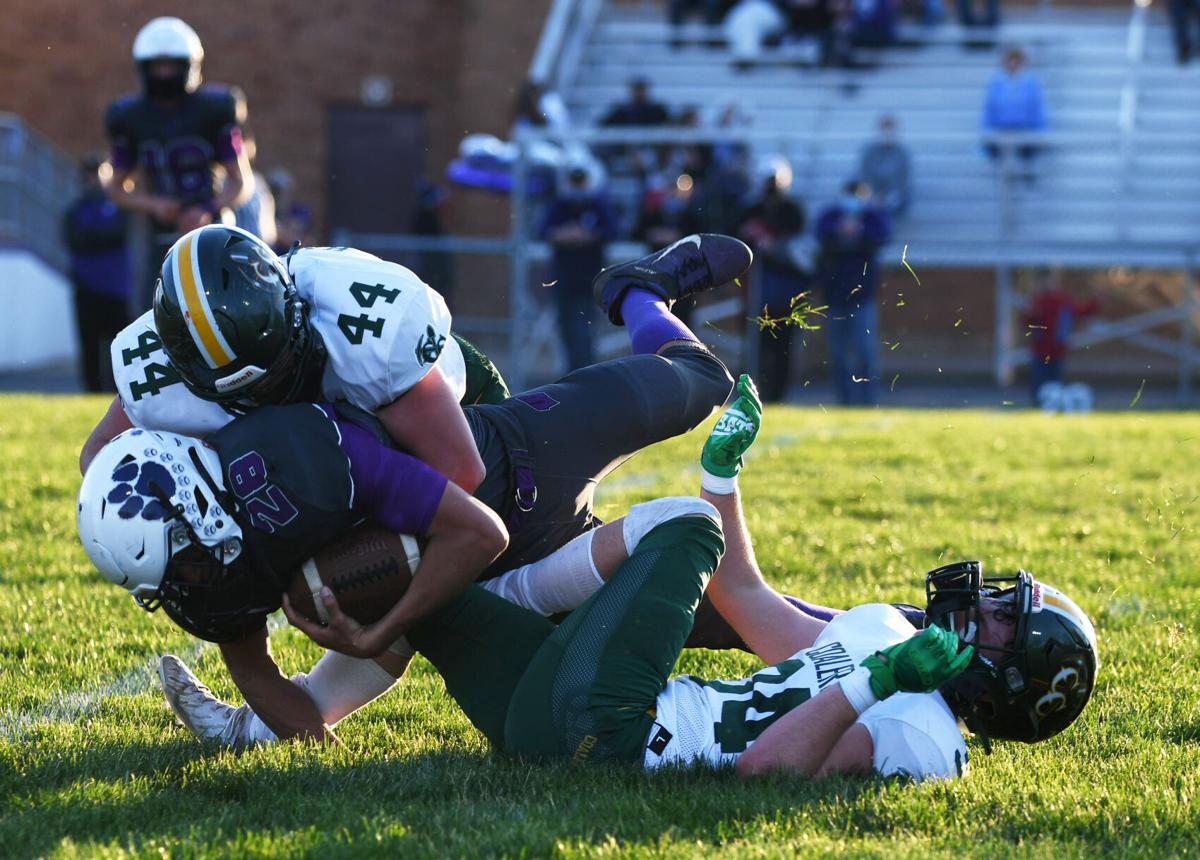 Wilmington’s Jack Narine is tackled by Coal City’s Ashton Harvey, left, and Kyle Gockman on Friday night during the Wilcats’ 24-21 comeback victory against the Coalers. 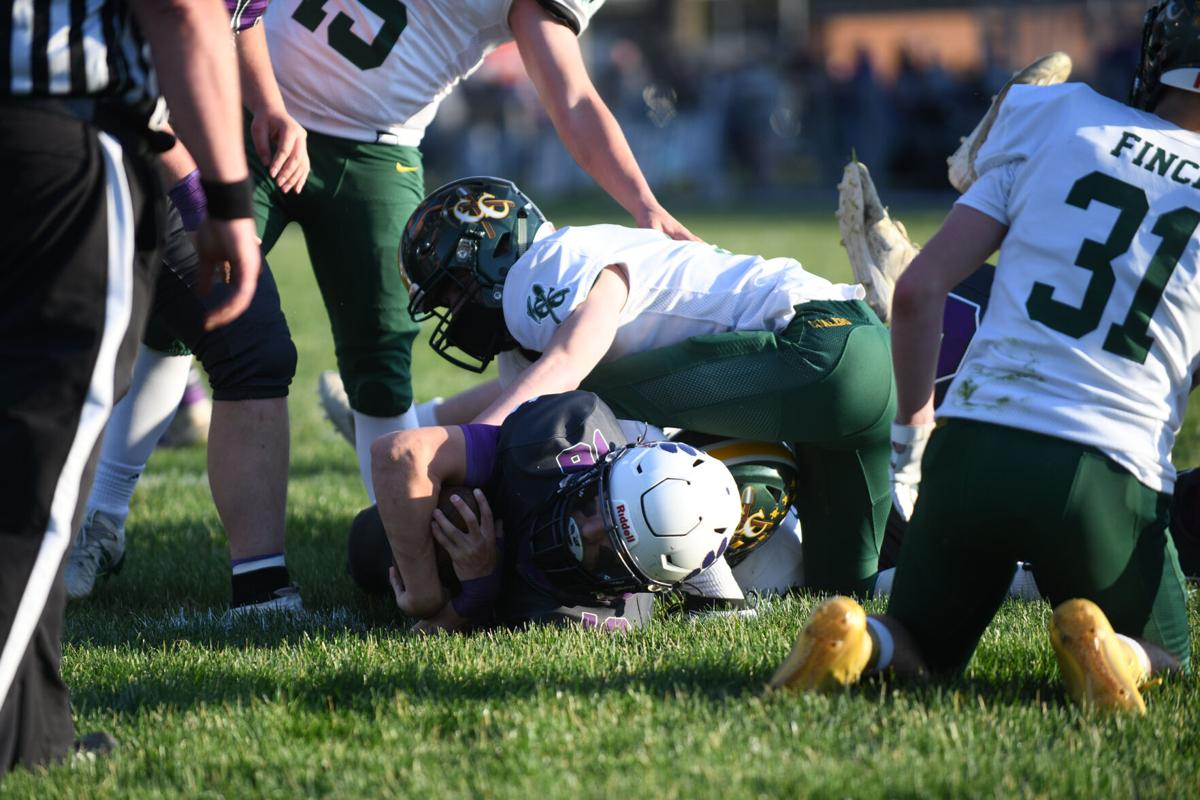 Wilmington’s Cody Franzen looks to the referee as he falls into the endzone for a touchdown Friday night during the Wilcats’ 24-21 comeback victory against Coal City. 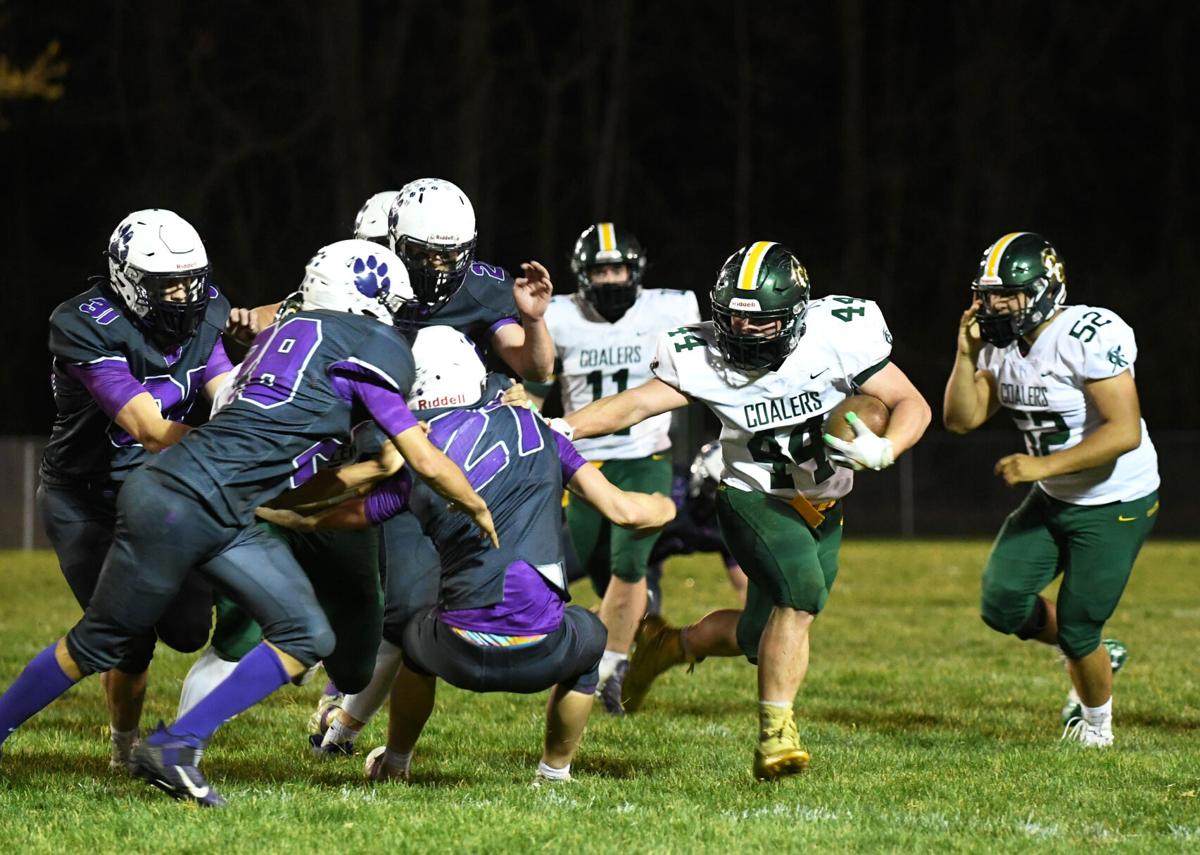 Coal City’s Ashton Harvey fends off Wilmington defenders en route to a first down Friday night during the Coalers’ 24-21 loss to the Wildcats.

Wilmington’s Jack Narine is tackled by Coal City’s Ashton Harvey, left, and Kyle Gockman on Friday night during the Wilcats’ 24-21 comeback victory against the Coalers.

Wilmington’s Cody Franzen looks to the referee as he falls into the endzone for a touchdown Friday night during the Wilcats’ 24-21 comeback victory against Coal City.

Coal City’s Ashton Harvey fends off Wilmington defenders en route to a first down Friday night during the Coalers’ 24-21 loss to the Wildcats.

WILMINGTON — Any successful comeback attempt derives from two main things — a certain will to win and a little bit of luck — and that’s exactly what the Wilmington Wildcats football team needed in order to successfully come back from down double-digits in the second half against arch rival Coal City on Friday night.

The Wildcats stormed all the way back from down 21-7 midway through the third quarter to edge the Coalers 24-21 to improve to 4-0 and remain atop of the Illinois Central Eight Conference by holding onto a game lead to both Peotone (3-1) and the Coalers (3-1). It also marked the first time the Wildcats defeated the Coalers since the 2017 season after having been outscored by Coal City 56-14 over the past two seasons prior to Friday.

“Whenever you beat somebody the caliber of Coal City in a rivalry game like this this, I think it’s definitely something to be very proud of,” said Wildcats coach Jeff Reents. “We beat a very good football team tonight and so I think that’s the biggest thing we’ll take away from tonight.”

Things started to turn around for the Wildcats once they scored their first touchdown in the second half off a two-yard touchdown quarterback keeper by Jack Narine with 2:52 left in the third quarter. Narine’s two-yard scamper helped cut Wilmington’s deficit to 21-14 while also giving its defense the juice it need to force a quick three-and-out by the Coalers offense on the ensuing drive before heading into the fourth quarter.

Down 21-14 heading into the final frame Wilmington knew it would have to do its best to stop Coalers running back Asa Cooper, who totaled three long touchdown runs of 74, 89 and 66 yards between the first three quarters.

The Wildcats opened up the final frame on offense where they eventually went on to hit a 40-yard field goal thanks to their kicker Allan Richards. With the field goal good, Wilmington saw themselves down 21-17 with nine minutes left.

Seeing they were on the verge of a comeback the Wildcat defense turned things up a notch by continually stuffing Cooper until the Coalers were forced to once again go three-and-out and give Wilmington a chance to take its first lead in the second half.

Starting on their own 34-yard line, the Wildcats drove all the way down the field until running back Matt Sanchez capped the drive off with a go-ahead touchdown on an 11-yard rush up the middle with 4:46 left in the game.

“It felt electric to score the go-ahead touchdown and to then hear all the fans out here, especially since I’m a senior,” Sanchez said. “Nothing beats it.”

Trying to regain some offensive rhythm, Coalers coach Dan Hutchings decided to run the offense primarily out of the Wildcat formation with Cooper leading the charge. And it almost worked to perfection as the Coalers drove it all the way down to the Wildcats 29-yard line when they coughed up the pigskin on a fumble.

But for Hutchings, Friday’s result didn’t come down to one offensive play.

“I don’t know how many first downs we had in the second half, but that’s what hurt us,” Hutchings said. “We didn’t move the ball or sustain drives.”

The huge win looked to give the Wildcats a big sense of pride given the lack of success its had against Coal City in the previous couple of season.

“We were very motivated for this game given the circumstances,” Sanchez said. “Since I was a freshman I’ve never beat Coal City in baseball or football and so to do it right now, with this group of guys, is a special feeling.”

Francis Loughran has fulfilled his dream of serving as head coach at his alma mater after being named the new Coal City football coach.