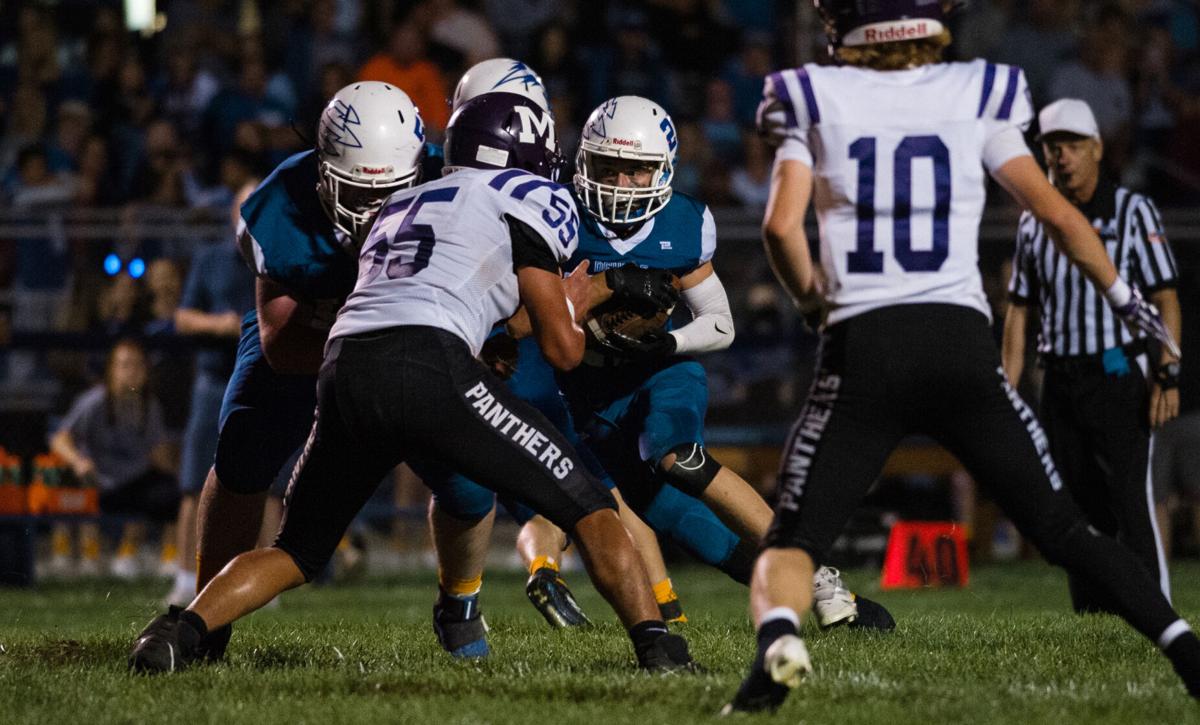 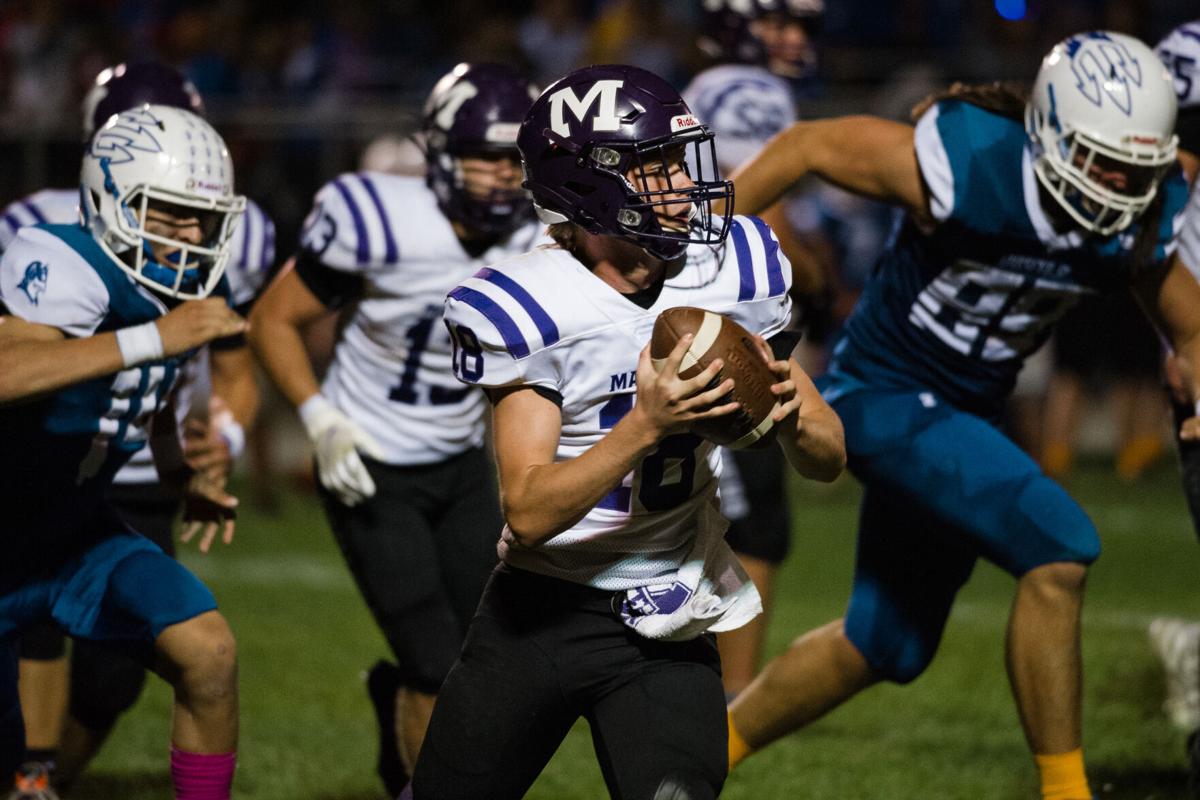 Manteno High School's Carter Drazy looks for an open man as he scrambles away from Peotone High School defenders in Friday night's game. 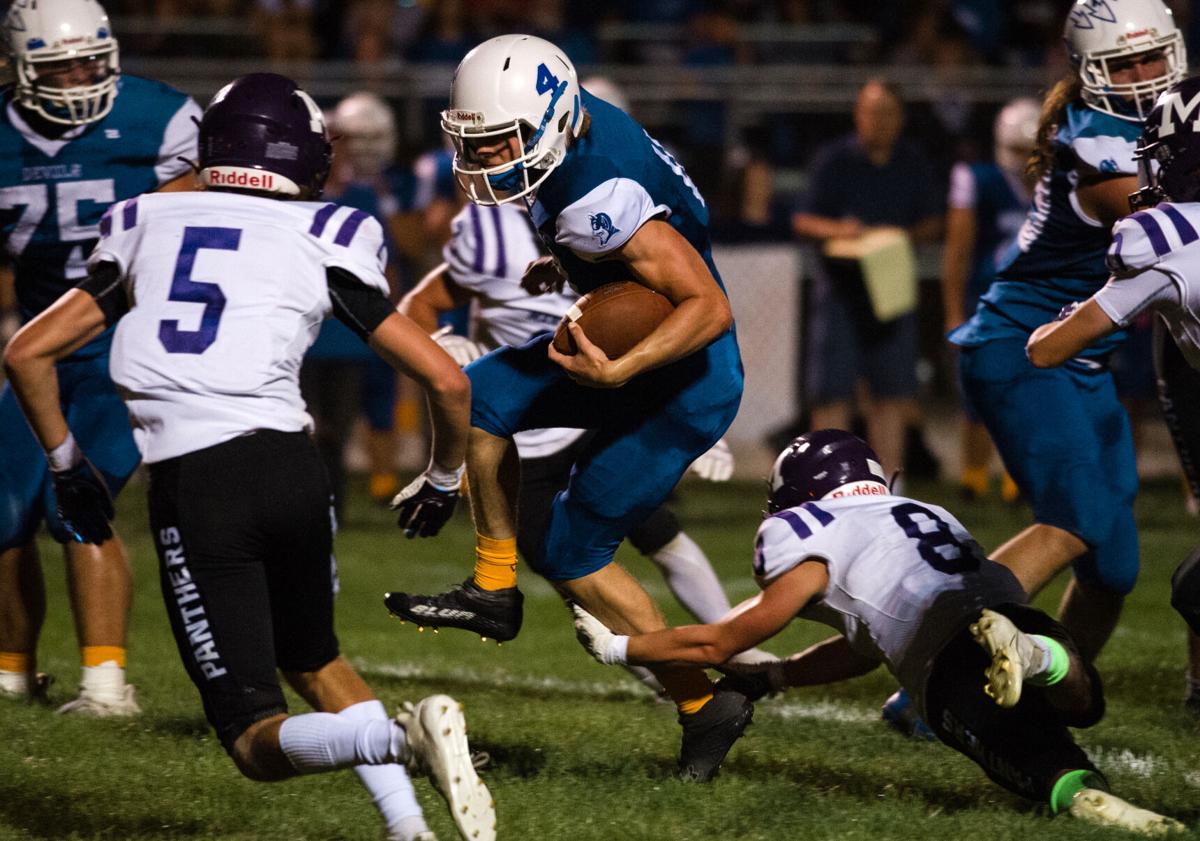 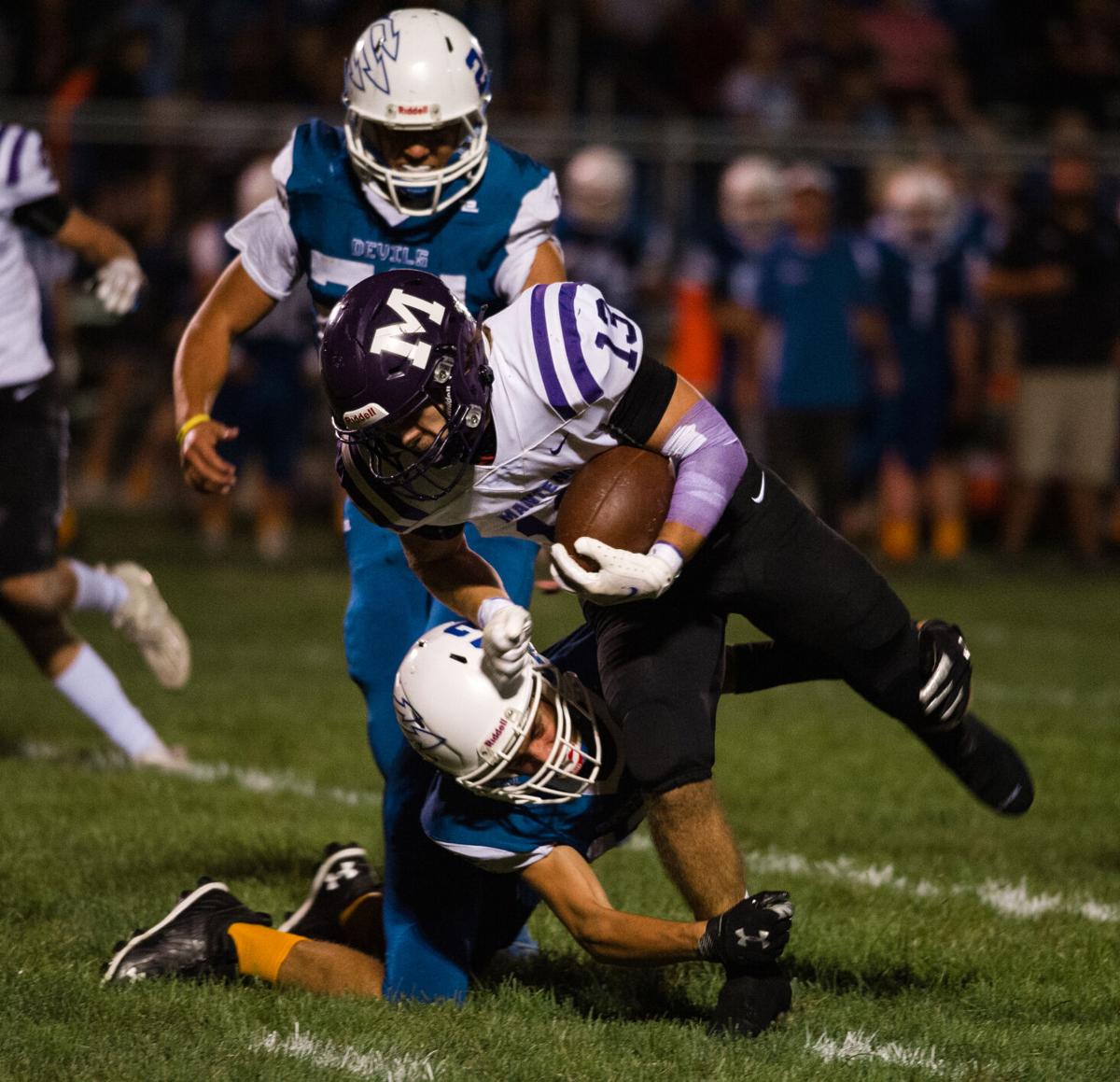 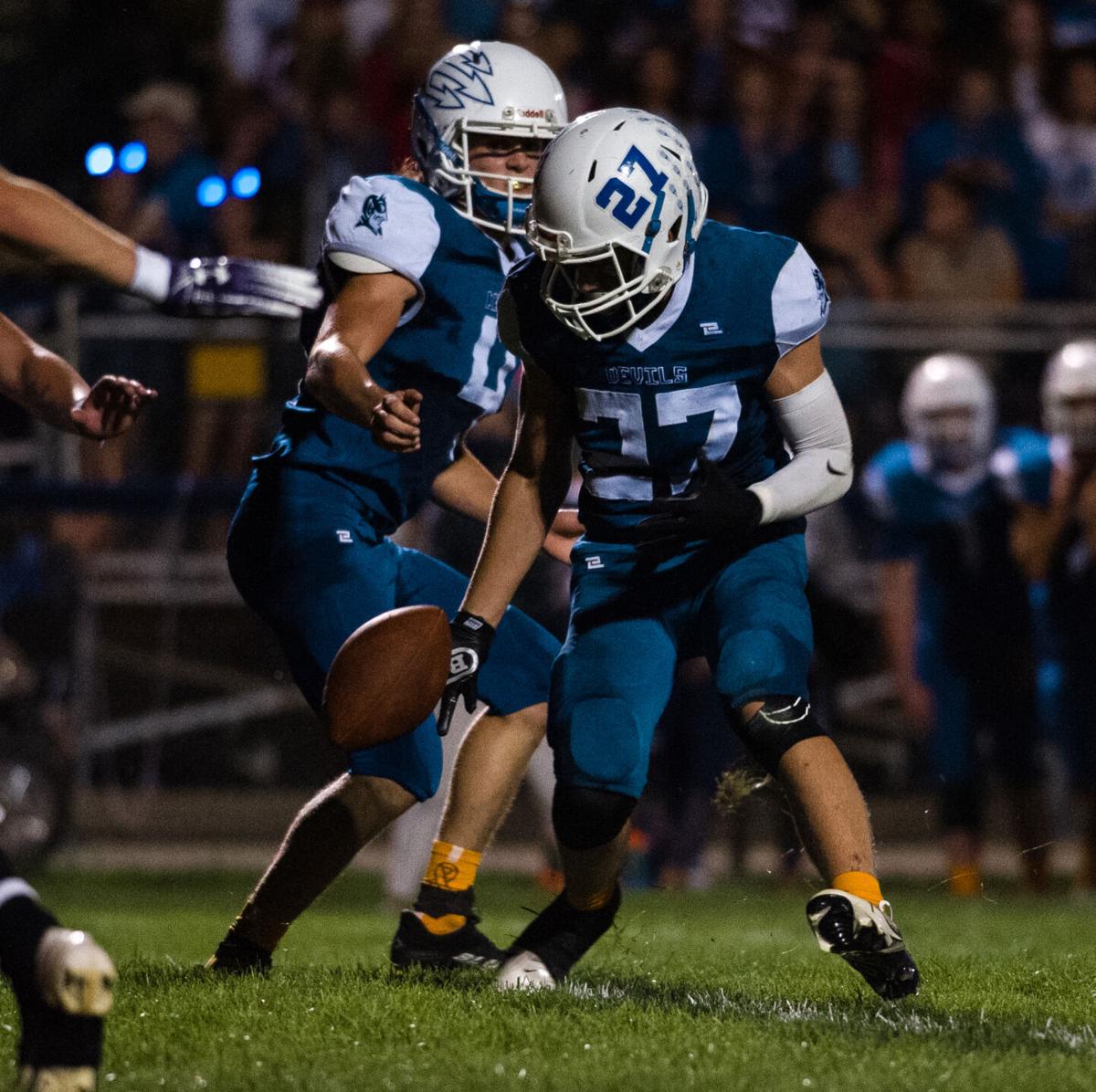 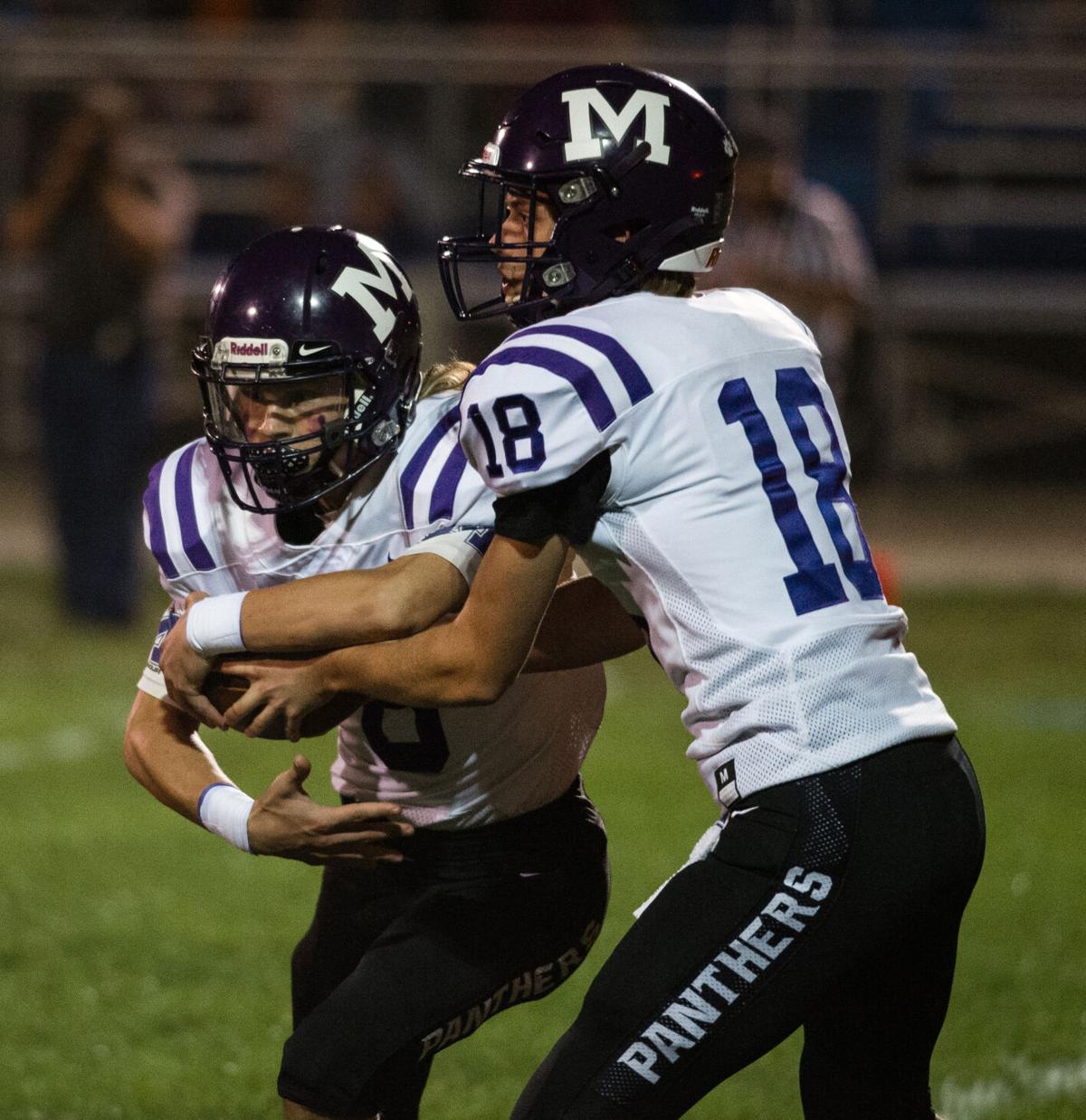 Manteno High School's Carter Drazy looks for an open man as he scrambles away from Peotone High School defenders in Friday night's game.

PEOTONE — Peotone’s offense was unstoppable Friday night, scoring on its first five possessions in a 35-21 home win over Manteno in the latest installment of the Rumble on Route 50.

The Blue Devils ran wild for 326 yards behind a deep stable of running backs and dominant offensive line play while winning the time of possession battle by more than a 2-1 margin.

The Blue Devils have dominated the Rumble on 50 rivalry in recent history, winning four out of the last five matchups in the annual rivalry, outscoring Manteno 144-61 over that span.

“I remember my first season here, we were down 35-0 at halftime and I vowed that would never happen again,” said Peotone coach Apostolos Tsiamas. “I have a lot of respect for coach Haines and what he’s done with that program, but this game is personal for our kids and became personal for me after we got embarrassed my first year.”

Running back Derek Knauer bulldozed into the endzone on Peotone’s opening drive, giving the home team the early lead halfway through the game’s opening quarter.

“I had coach [Tsiamas’] voice in my head telling me to keep chopping my feet and to finish the run,” Knauer said. “So that’s exactly what I did, and got to the goal line and my teammates gave me the final push to get into the end zone.”

Manteno responded by scoring its first touchdown of the season on a Carty Drazy quarterback dive to tie the game at 7-7 with 1:19 left in the first quarter.

“That was the best feeling to finally put some points on the board,” Drazy said. “That drive sparked our confidence and jumpstarted us offensively for the rest of the game.”

T.J. Chenoweth added a touchdown of his own midway through the second quarter on a quarterback sneak up the middle to put the Blue Devils up 14-7.

After a stop on defense, Peotone scored again on Knauer’s second touchdown run of the game from a yard out, extending the Blue Devils’ lead to 21-7 with in the closing seconds of the first half.

Drazy scored his second touchdown of the game on Manteno’s first possession of the second half on a three-yard run, cutting the Blue Devils’ lead to one score at 21-14.

“I had a read to hand it off to my running back or keep it,” Drazy said. “I saw the end attack the running back and kept it. We still have a lot to improve on but we did some good things tonight and took a step forward as a unit.”

Peotone bounced back with a long and drawn-out drive, chewing up most of the third quarter clock and converting two fourth-down conversions before fullback Dawson Piper scored from two yards out to make the score 28-14.

Manteno showed no quit, however, marching down the field before Logan Worobey found paydirt on a 1-yard run to cut Peotone’s lead to 28-21 at the 11:01 mark of the 4th quarter.

Knauer scored his third touchdown of the game with 6:27 left in the game to secure a 35-21 Peotone win.

“That touchdown was the nail in the coffin,” Knauer said. “It felt good in front of a big home crowd. We’re 3-0 right now and that’s exactly where we want to be.”

Knauer led the Blue Devils with 111 yards rushing on 17 attempts and three touchdowns. Dylan Sroka had 20 carries for 91 yards and Piper ran 16 times for 84 yards and a touchdown. Chenoweth turned seven attempts into 27 yards with a touchdown.

No individual stats were available for Manteno.

Manteno will host Reed-Custer next Friday at 7 pm. Peotone will travel to Wilmington to face the top-ranked team in Class 3A at 7 pm.