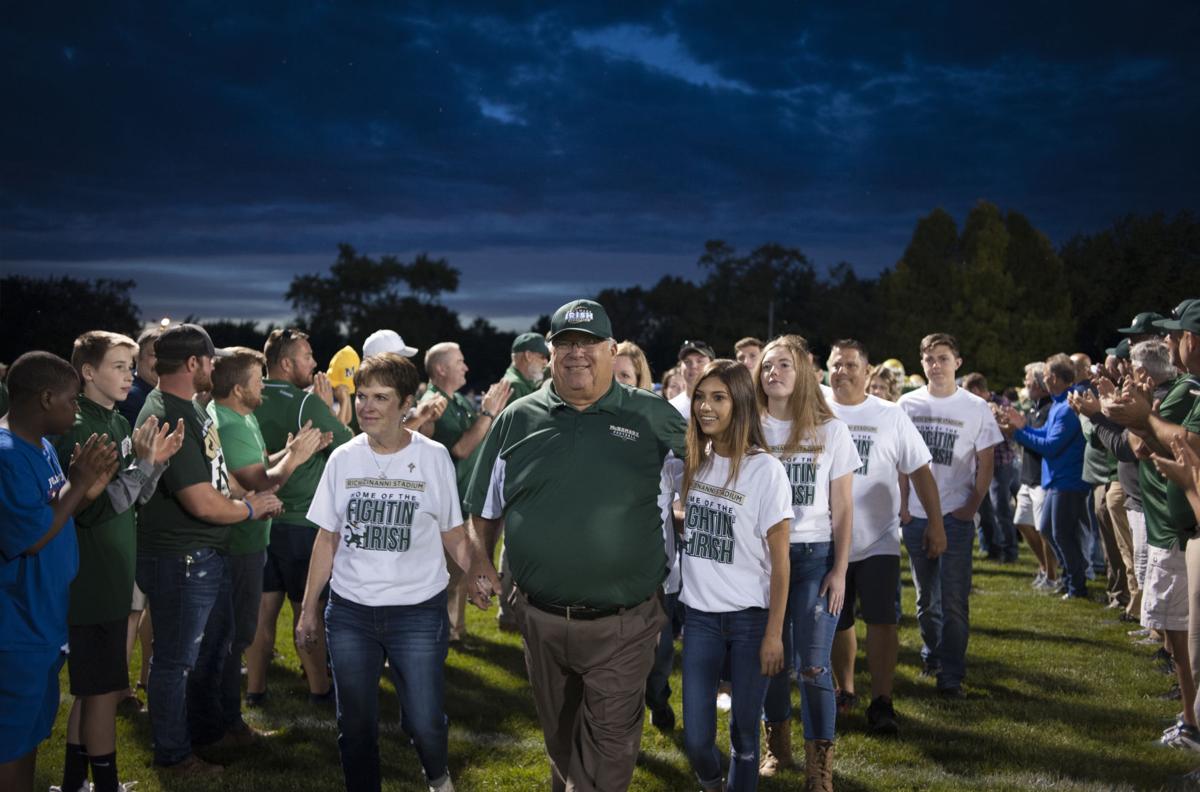 Bishop McNamara's head football coach, Rich Zinanni, center, walks onto the football field with his family during the dedication of the field in 2019. Zinanni will retire at the end of next season. 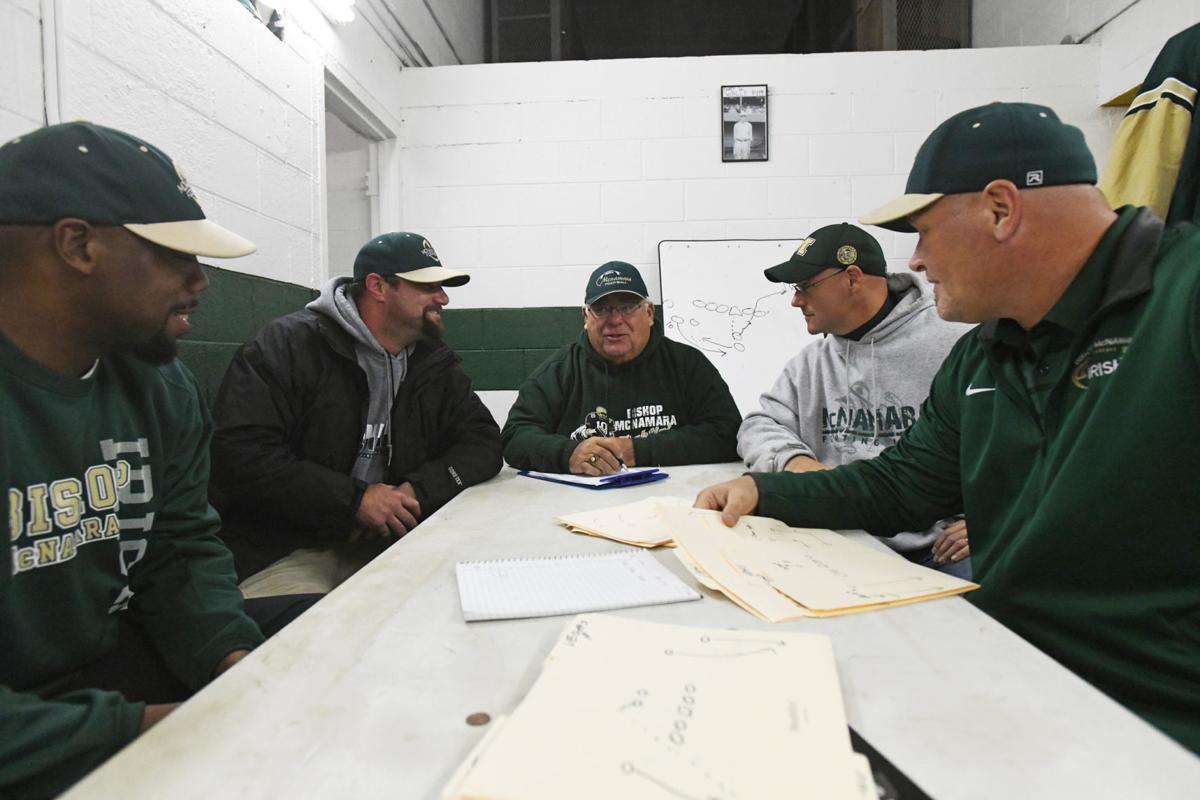 Bishop McNamara head coach Rich Zinanni, center, meets with his defensive football coaches, from left, Curtis Crossley, Alan Rood, Kurt Belisle and Mike Vickery. Rood will serve as co-head coach this fall with Zinanni, who will retire at the end of the season.

Bishop McNamara's head football coach, Rich Zinanni, center, walks onto the football field with his family during the dedication of the field in 2019. Zinanni will retire at the end of next season.

Bishop McNamara head coach Rich Zinanni, center, meets with his defensive football coaches, from left, Curtis Crossley, Alan Rood, Kurt Belisle and Mike Vickery. Rood will serve as co-head coach this fall with Zinanni, who will retire at the end of the season.

Of the 46 seasons Rich Zinanni has been the football coach at Bishop McNamara Catholic High School, the spring season — played six months later in the year without a postseason and on a smaller scale because of the pandemic — was unquestionably the most unique of Zinanni’s storied career.

It also will go down as the final year he served as the Fighting Irish’s solo head coach.

“I announced it at our banquet, and I didn’t think I’d lose it, but I did,” said Zinanni, a 1965 graduate of the school when it was known as St. Patrick. “It was hard to talk for a minute when I announced that I would retire.”

Zinanni, 74, told the school last week and confirmed to the Daily Journal on Monday he will retire from coaching after the fall 2021 football season, when he will serve as co-head coach with Alan Rood.

“It was always a dream to come back to Bishop McNamara and be a part of the tradition and legacy that I grew up on as a player and what got me into NIU,” Rood said.

He also seemingly has held that many different titles at McNamara, serving in every capacity imaginable from athletic director to assistant principal to teaching the school’s accounting class.

“It’s [going to] end, and that’s OK because it’s been great,” Zinanni said. “The quality of my life has been outstanding because of the people, families, coaches and faculty at McNamara.

“I wasn’t [going to] get rich, but I think every kid’s goal should be to be happy in life, and I’ve done that.”

Rood is one of those people Zinanni spoke of, having played for Zinanni before his 1998 graduation from McNamara. After his playing career at Northern Illinois, Rood stayed in DeKalb for a year as a graduate assistant before a year at Eastern Illinois University. Since then, he’s coached at St. Viator, Niles North, Morton and Von Steuben.

It was at Von Steuben, a Chicago Public School, where Rood started the football program from scratch in 2015 before returning to his alma mater in 2018 as the school’s P.E. and health teacher and an assistant football coach. Now 41 and a resident of St. Anne, Rood also has served as the junior high’s athletic director the past two years.

“Starting a program from scratch and creating that tradition, I think that’s huge,” Rood said. “I went to [Von Steuben’s] game against Lane Tech this year and saw them still doing things the way we did when I started the program six years ago, and it was cool seeing that tradition carry on.”

While Rood started traditions at Von Steuben, the program he soon will control has seen plenty of traditions built during Zinanni’s tenure. Five-time state champions, Zinanni’s Irish appeared in their ninth state championship game in program history in 2018, Rood’s first year back with the Irish.

“Having that experience was phenomenal just to see different people’s ways of handling those situations,” Rood said. “That’s the main thing, seeing the ‘why’ behind the things [Zinanni] does as a coach, and that’s really helped me with how I go about my coaching style.”

Zinanni said the transition began this season, with Rood having more control regarding planning practices and other daily duties.

Zinanni said had it not been for COVID-19 shortening the season, moving it to the spring and eliminating the playoffs, the 2020-21 school year likely would have been his last.

But the Illinois High School Football Coaches Association Hall-of-Famer, who had the stadium at the Irish’s home turf, Memorial Stadium, named after him in 2019, now will have one last season to bid farewell to his team and the prep football community.

“It hit me when I told the kids, and it will hit me as we play each team, one-by-one,” Zinanni said. “I’ve got good friends coaching on these other teams, so it should be fun.”

Aside from the players and coaches, there also will be one more special presence on Zinanni’s farewell tour in the fall. His wife of 29 years, Jane, who Zinanni called his biggest fan, will be in her signature spot at midfield in the top of the stands of Rich Zinanni Stadium for every game this fall, as she has been for the past 28 seasons.

“She’s been great because she’s always left [retirement] up to me, and she’s never missed a game,” Zinanni said. “She knew I’d get out at some point, maybe even last fall, but she’s been great.”

Zinanni to appear on WGN Radio this evening

The Rich Zinanni Retirement Tour officially began this week, and one of the first stops will be in one of the largest media markets in the world.