You are the owner of this article.
Edit Article Add New Article
You have permission to edit this article.
Edit
Home
News
Sports
Opinion
Life
Obituaries
Jobs & Classifieds
Lifestyles of Kankakee County
Discover 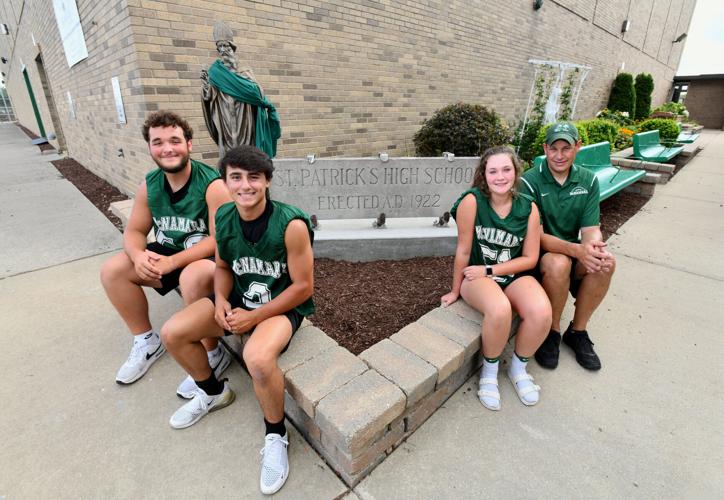 From left, Bishop McNamara senior football players Zach Hansen, Landon Provost and Kendell Lade and head coach Shawn Lade sit in front of the recently re-installed St. Patrick's High School sign, the former name for Bishop McNamara. The re-installation of the sign is part of the school's 100th anniversary celebrations for this school year, which also will be the first in a new era of McNamara football. 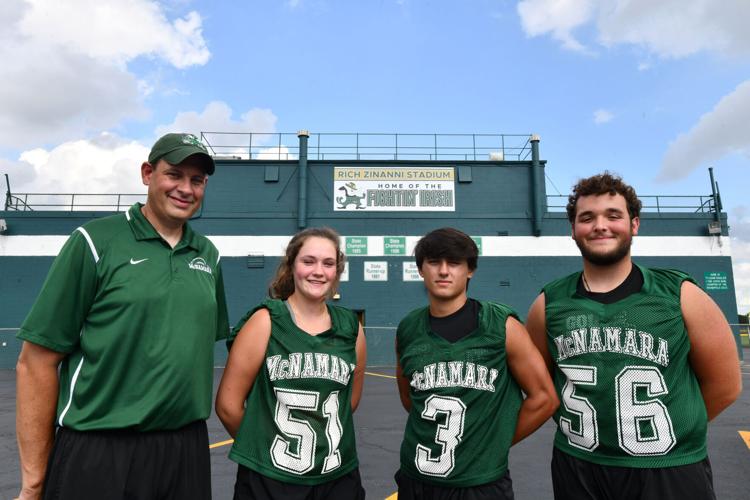 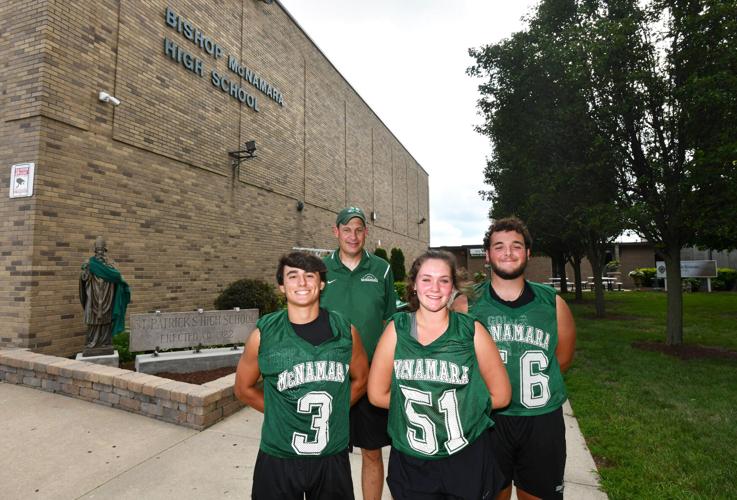 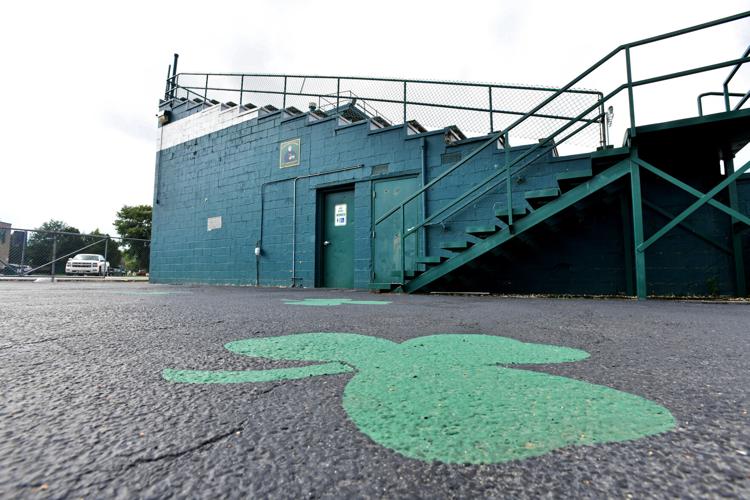 From left, Bishop McNamara senior football players Zach Hansen, Landon Provost and Kendell Lade and head coach Shawn Lade sit in front of the recently re-installed St. Patrick's High School sign, the former name for Bishop McNamara. The re-installation of the sign is part of the school's 100th anniversary celebrations for this school year, which also will be the first in a new era of McNamara football.

As Bishop McNamara Catholic High School — known as St. Patrick’s from its inception in 1922 until 1956 — has begun to kick off its yearlong celebration of its 100th anniversary this school year, several memories have been unearthed that revolve around its most successful sport through the years — football — and the person who led it for 47 seasons and a handful of state championship rings, Rich Zinanni.

The football field will serve as a focal point for the Fightin’ Irish faithful this fall, but the face of the program will be a fresh one.

Shawn Lade, a 1995 McNamara graduate, was tabbed to replace Zinanni’s replacement, Alan Rood, when Rood, a 1998 McNamara graduate, resigned from his football coaching, physical education and health teaching jobs to teach at St. Anne, head the strength and conditioning department and help revive the Cardinals’ football program in 2023.

Zinanni had first announced the fall 2021 season would be his last in May of that year, with Rood announced as his replacement at the same time.

Just more than a year after Zinanni’s initial announcement, Lade found himself thrust into the unimaginable position of filling the shoes of a hall-of-fame coaching giant who won 371 games — the third-most in state history — and has been hard at work ever since he was being promoted from the assistant coaching role he first took up more than a decade ago.

“It was kind of a whirlwind; I talked to Coach Rood in the afternoon to set up practice; he called me two hours later to tell me he wasn’t [going to] be coaching anymore,” Lade recalled. “Then, I got a call from [principal Terry] Granger, and he told me I was [going to] coach the boys; Coach Rood said his goodbyes, and we got to practice.”

Summer practice is where Lade and his 2022 team have spent much of the past couple months, as they now, like the rest of prep football teams in Illinois, are in the final days of their no-contact week before fall practices begin on Monday.

And as the start of the season nears closer and closer, one of the senior leaders helping Lade ease into his new role, third-year offensive lineman Zach Hansen, feels plenty of emotions but one in particular.

“Excitement, lots of excitement,” Hansen said. “I’m a little nervous — it’s my senior year, and there’s been lots of ups and downs coaching-wise — but Coach Lade has really brought us through and done a great job, and the whole team is definitely excited.”

Hansen is one of three returning linemen, along with Connor Inman and Jarred Salzman, as well as quarterback Deuce Allaway and the wide receiver duo of second cousins Jaxson and Landon Provost, whom Lade credits with keeping the Irish going through the summer period.

Landon Provost said Zinanni brought plenty of knowledge and tradition to the Irish, and with Lade being a coach who both played and coached for him, has been able to continue that in a new way.

“The thing I miss most about Coach Z is the history and tradition; he knew a lot and was intelligent about the game and knew a lot about every team that could help us out week by week,” he said. “Going off Coach Z and his history, Coach Lade is a breath of fresh air, really.

“With having Coach Z around for so long, it’s nice to have someone new [who] also knows what they’re talking about and can help reinvigorate the team.”

The Provosts are the latest in a long line of McNamara athletes who have worn the Irish green and white, with most of the Provost family success coming in basketball and distance running. But after an all-state campaign by another Provost, 2022 graduate Colton, last season, the pair of senior wideouts are hoping to continue adding to the family name on the gridiron.

“Jaxson being on the team as a fellow wide receiver, it’s nice to have him on the team and strengthen our bond,” Landon said. “People call a team a family, and I have family on the team, so it really helps.”

The Provosts aren’t the only familial connection on the team either. Lade’s daughter, Kendell, is set to serve on both sides of the ball, working as a guard and tackle on offense and an end on defense.

She began playing during the spring 2021 season, after the season’s shift from the fall to the spring left the JV team, which was coached by her dad, shorthanded in the trenches, a place she’s found herself since after initially thinking football was just something she’d do for a year.

While he’s Coach Lade, rather than dad, at school, and Kendell is no different than the other student-athletes whom he expects to “show up, be a good teammate, know your assignments and be coachable,” the opportunity to coach his daughter, the lone current varsity football player at the school, is not lost on him.

It was during a JV game against Ridgewood last fall, one in which the boys took it upon themselves to make Kendell the first girl in school history to score a touchdown, in which he probably understood that best thus far.

“Our quarterback breaks free for a 40-yard run, then runs out of bounds at the 2-yard line — as a coach, I’m ready to lose my mind on him,” Shawn recalled. “He runs to me, and I’m getting ready to scream, when he smiles and says, ‘Give Kendell the ball, we’ll get her a touchdown.’

“That says a lot about how our boys expected her and wanted her to have success.”

The daughter of not only the man tasked with replacing a legend but also a Bourbonnais police officer, Kendell knows her dad has what it takes to continue McNamara’s storied football program but couldn’t divulge too many reasons why in true, teenage-daughter fashion.

“He has a lot of courage, and he’s very organized,” Kendell said. “I don’t want to boost his ego too much, but he’s a pretty good guy, too.”

Kendell’s first year of JV football was also the senior season for the last female football player at McNamara, Claudia Dolliger. Kendell said Dolliger was one of her high school football role models, but as a longtime watergirl for the same program she now plays for, her Irish football models are gender-neutral.

“I looked up to Claudia Dolliger; she was like my big sister, and we’ve always been close and are good friends,” Kendell said. “Since before I came across football, I’ve always been around it, so my role models are the boys, too.

“And there are some other women that inspire me, who go along with football and do modeling, and as a female, I’m just like, ‘I want to be like that.’”

With the start of the fall season just two days away, the Irish are excited to both build upon longstanding, century-old traditions while creating new ones as they transform into a new era.

Coach Lade, who thanked Zinanni for continuing to be available in his retirement, knows between the newness of this fall and the embracing of all that has come in the past 99 years, there will be plenty of opportunities for outside noise. But he has faith his team will keep their eyes on the prize.

“They’re [going to] know our schedule; they know it’s the same offense and defense, so football-wise, it shouldn’t change as long as they show up and put in the work, which I know they will,” the rookie head coach said. “But there will be a lot more chaos around the school with the 100 years.

“... We haven’t had that transition before, so we don’t know what to expect or how to handle it, other than just taking it day by day.”

While they aren’t quite sure what to expect, the team surely knows its goals, the same ones the Irish football program has had since its inception a decade into the school’s 100 years of existence — winning a championship.

“Being a part of Coach Z’s last season is something that I will never forget, and we made a lot of great memories last year as a team and we had a lot of success,” Jaxson Provost said. “But this year is a new year and a new era with Coach Lade, and he is preparing us everyday for the season, and this year, we have to try [to] accomplish what we came short of last year.”

The IHSA turns over its calendar Monday, the first day of fall sports practices for the 2022-23 school year. In addition to football, area schools will be starting seasons in girls volleyball, boys soccer, boys and girls golf, boys and girls cross country, girls tennis and girls swimming and diving.

The sports have staggered starting times in terms of their first competitions, beginning with golfers teeing off Aug. 11 and culminating with the kickoff of the first football games Aug. 25.

Some of the week's best photos from local prep sports games and competitions.