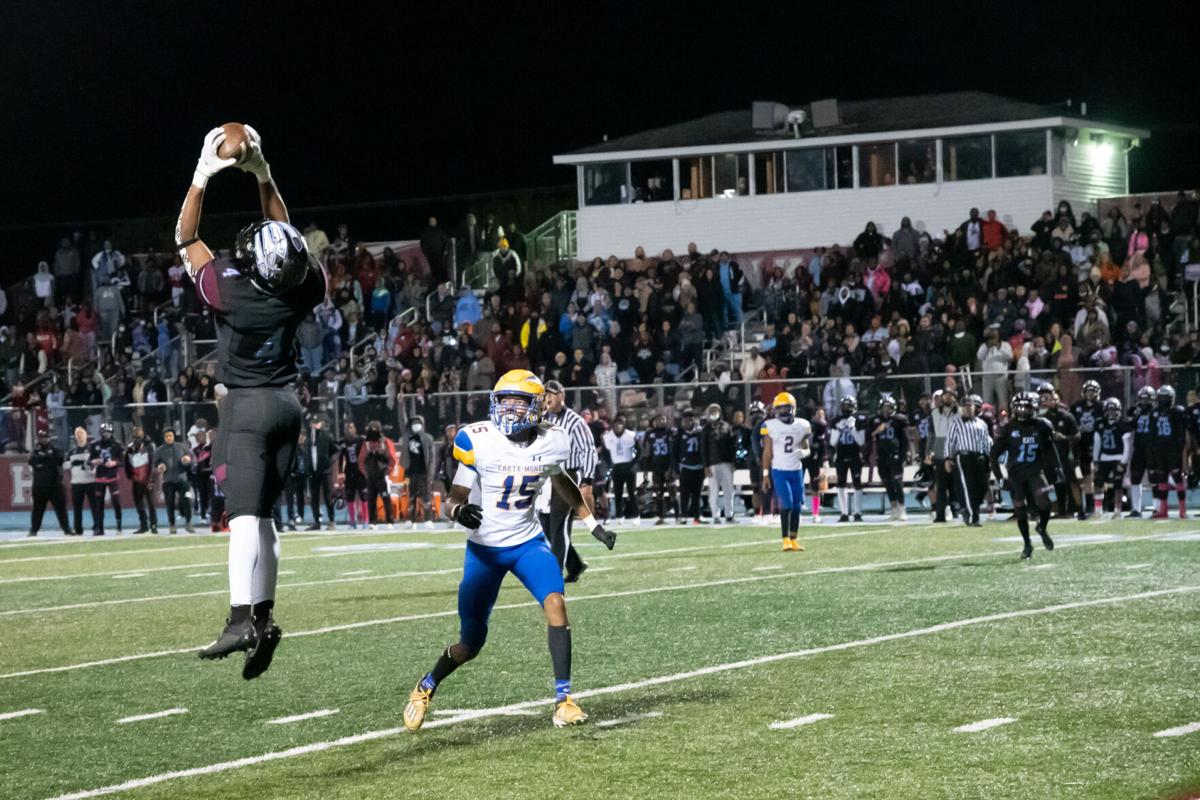 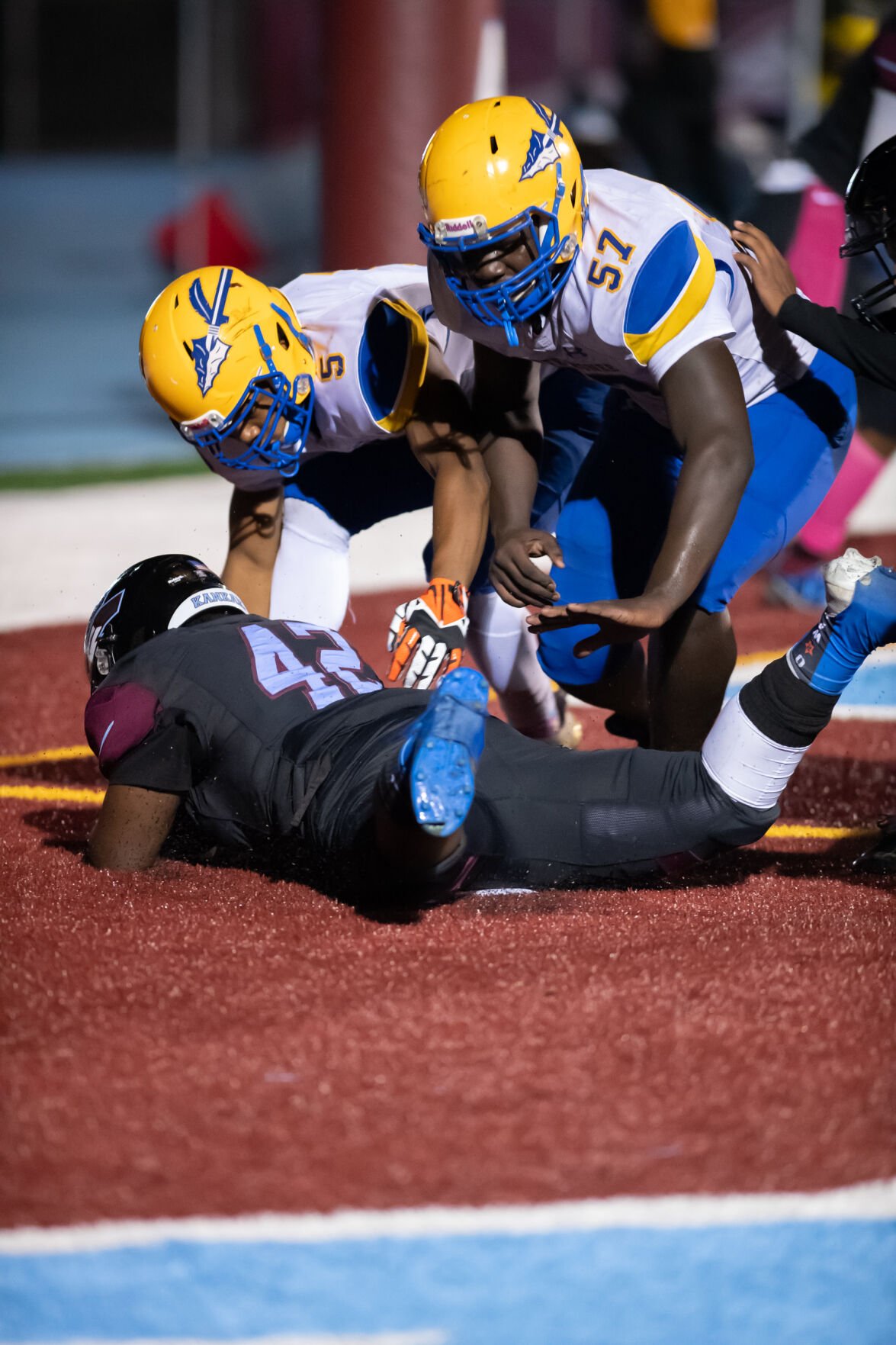 Kankakee's Demar Ivy recovers a mishandled punt in the endzone for a touchdown late in Friday's 28-20 win over Crete-Monee. The touchdown was the deciding score in Friday's game. 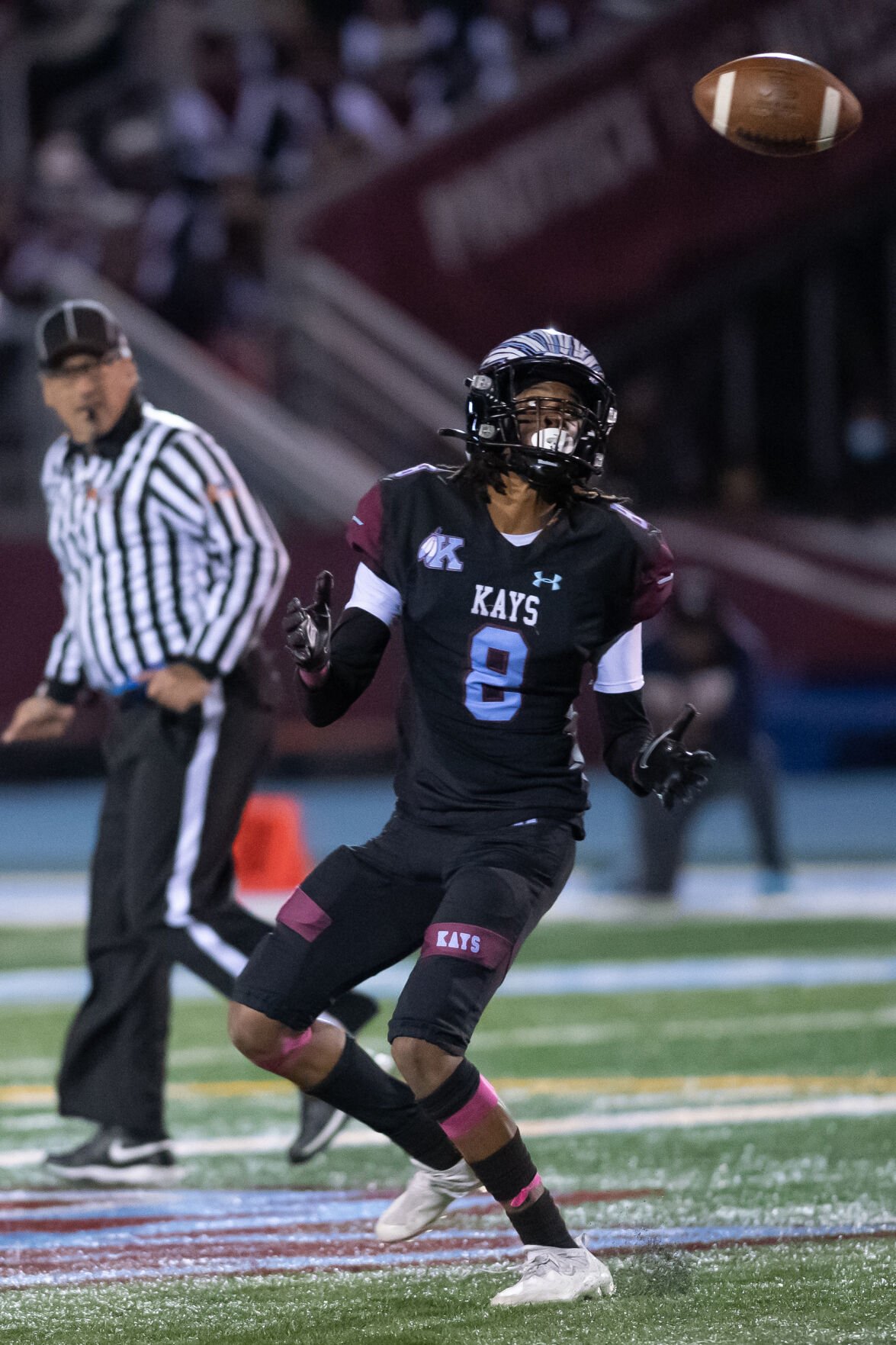 Kankakee’s Pierre Allen collects a tipped pass for a touchdown during Friday’s 28-20 win over Crete-Monee. 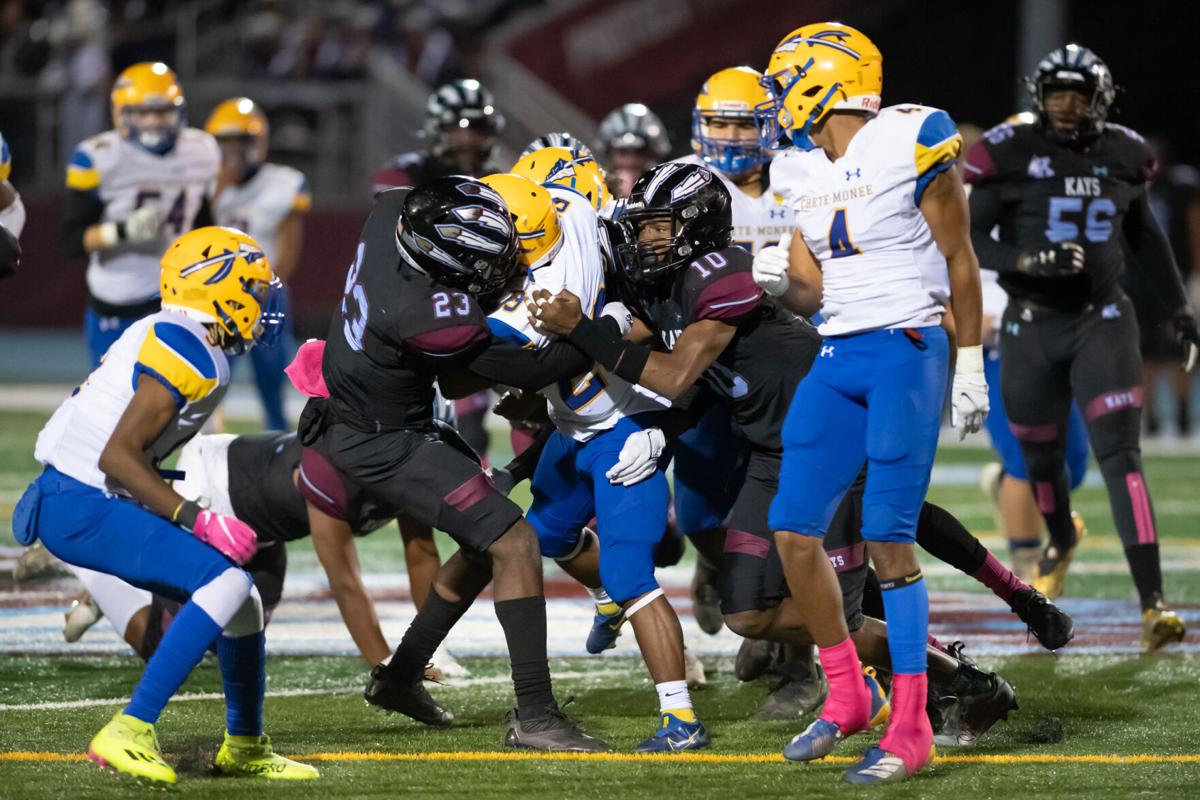 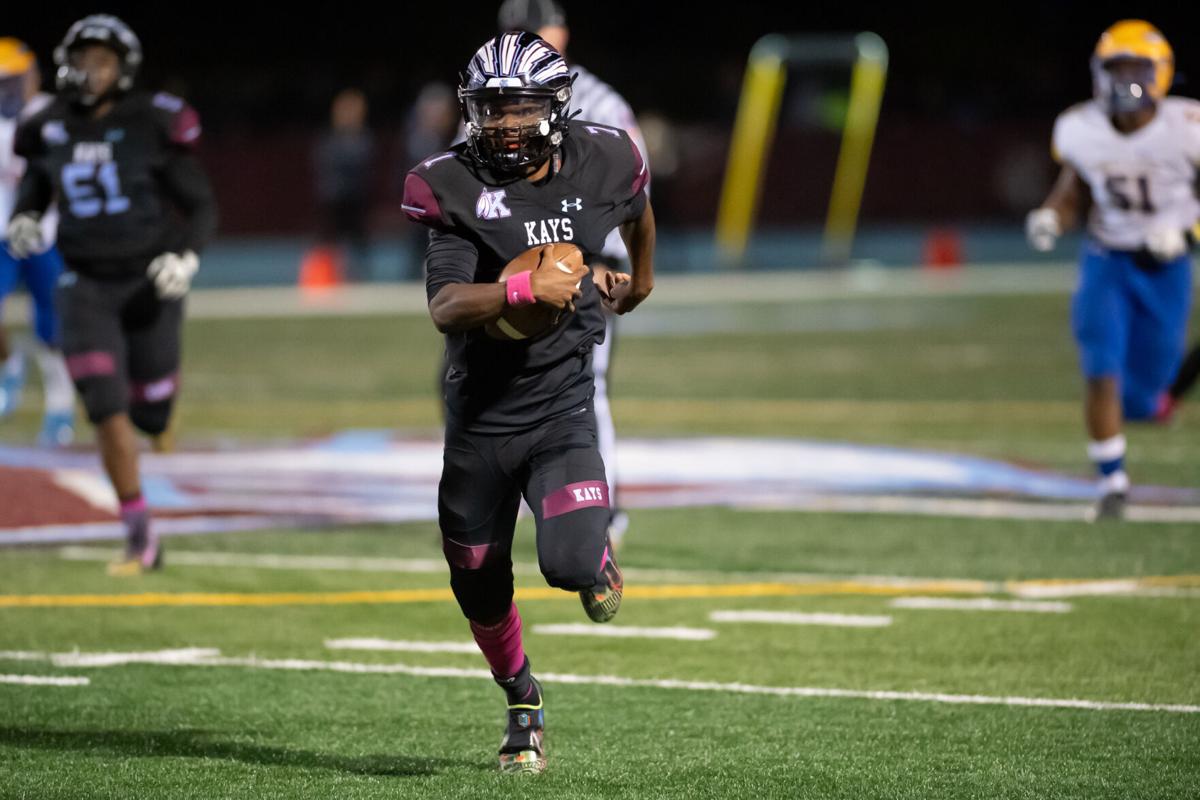 Kankakee's Demar Ivy recovers a mishandled punt in the endzone for a touchdown late in Friday's 28-20 win over Crete-Monee. The touchdown was the deciding score in Friday's game.

Kankakee’s Pierre Allen collects a tipped pass for a touchdown during Friday’s 28-20 win over Crete-Monee.

KANKAKEE — Over the past couple of seasons, the Kankakee football team knew it was close to finally earning an elusive Southland Athletic Conference championship.

On Friday night, the Kays got just that, and much more.

With just under a minute remaining in Friday’s heavyweight battle between the host Kays and their biggest enemies, Crete-Monee, the Warriors were driving and appeared poised to get an opportunity to send what was a 28-20 game to overtime.

But then Kays linebacker Nickolos Hall picked off a Joshua Franklin pass at the Kankakee 37-yard line with 54 seconds on the clock to preserve the 28-20 victory that gave the Kays their first-ever Southland title, their first win over the Warriors since 2009 and their first 9-0 regular season since 1990.

“We’ve been studying film every single day, and when the quarterback scrambled, [defensive coordinator Samuel Jordan] just said sink, sink, sink and he’d let it go,” Hall said. “When he did, it all just happened in slow motion. It’s a blessing and I’m so proud of my teammates.”

The Kays scored the game’s first 14 points and led by a two-touchdown margin for much of the night, but a late Warriors rally allowed them to tie the game at 20 on Terry Elias’ third rushing touchdown of the night midway through the fourth quarter.

But after the Kays forced a three-and-out that forced the Warriors to punt from their own end zone with less than 3 minutes remaining, a high, fumbled snap ended up on the colored turf for what seemed like an eternity, before Aarian Brown fell on the ball for the decisive touchdown with 2:29 on the clock.

“Every play matters,” Kays coach Derek Hart said. “We talk about it all the time, and there was an opportunity and [Brown] made the most of it.”

The first play of the game was an electric 36-yard run from Jyaire Hill, who later capped the game’s opening drive off with a one-yard touchdown.

Three plays after Josiha Mason recovered a Crete-Monee fumble in the red zone, Kays quarterback Tomele Staples flicked a lob pass on the run that was tipped by the Warriors’ Ka’ron Mines, right into the hands of Pierre Allen, who caught the ball near midfield, turned around and sprinted the rest of the way for a 91-yard touchdown that put the Kays up 14-0 just four-and-a-half minutes into the game.

“I was just playing ball,” Allen said. “Before the game i told myself to catch everything, stay concentrated and stay focused.

The Warriors finally found the scoreboard when Elias plowed in for his first score from six yards out to make it a 14-6 affair with 1:22 left on the half, but it took the Kays just two plays — a 43-yard toss from Staples to Allen and an eight-yard run from Demere Turner — to once again find the endzone and take a 20-6 halftime lead.

After two Warriors punts and a Kays punt and turnover on downs opened the second half, the Warriors and Elias scored again, this time a two-yard run with 3:24 on the third-quarter clock.

Crete-Monee then milked the first half of the fourth quarter clock before Elias’ five-yard score tied the game at the 6:13 mark. The Kays responded by marching down to the Warriors’ 36-yard line, where Staples was picked off in the endzone by Mines.

But after forcing a three-and-out that even backed the Warriors up eight yards to the Kankakee 12-yard line, a high snap was bobbled by the Warriors’ punter before it hit the turf, where Brown scooped it up and Staples found Allen for the ensuing two-point conversion.

Kankakee senior offensive and defensive lineman Joseph Shannon, a three-year starter who had three tackles for loss Friday, knew his classmate was going to step up.

“I knew my man was gonna get it, I believed in him,” Shannon said. “Every punt they had, we were on it. I knew we were gonna get it one of those times.”

Even then, the Warriors had one last chance, moving the ball 25 yards on their first five plays of the ensuing drive before Hall, another three-year starter, joined Brown in making plays that will be remembered by Kays fans forever.

“I’m blessed to have been in this program for so long, and now I’m able to be a leader to my teammates and help them be disciplined,” Hall said. “It’s just so amazing and I’m so glad to be here.”

Hill ran for a team-high 64 yards and a score on 10 carries. Turner had his touchdown and 41 yards on seven carries. Nate Hill had nine carries for 11 yards. Staples was 8-for-14 passing for 196 yards, a touchdown and an interception. Allen caught five passes for 203 yards and his score. Karson King had a 16-yard catch and a 52-yard pass. Christian Whallum had two catches for 16 yards.

The Kays figure to be one of the top seeds in either the Class 5A or 6A playoff bracket. They will learn their postseason road Saturday night.

The Kankakee football team is making history by heading to the state finals after defeating Morton 41-14 Nov. 20 in the Class 5A semifinals. R…

After the girls tennis and boys golf teams wrapped up spectacular seasons earlier this month, the football, volleyball and boys soccer teams at Kankakee have joined in making it a memorable fall for the Kays.