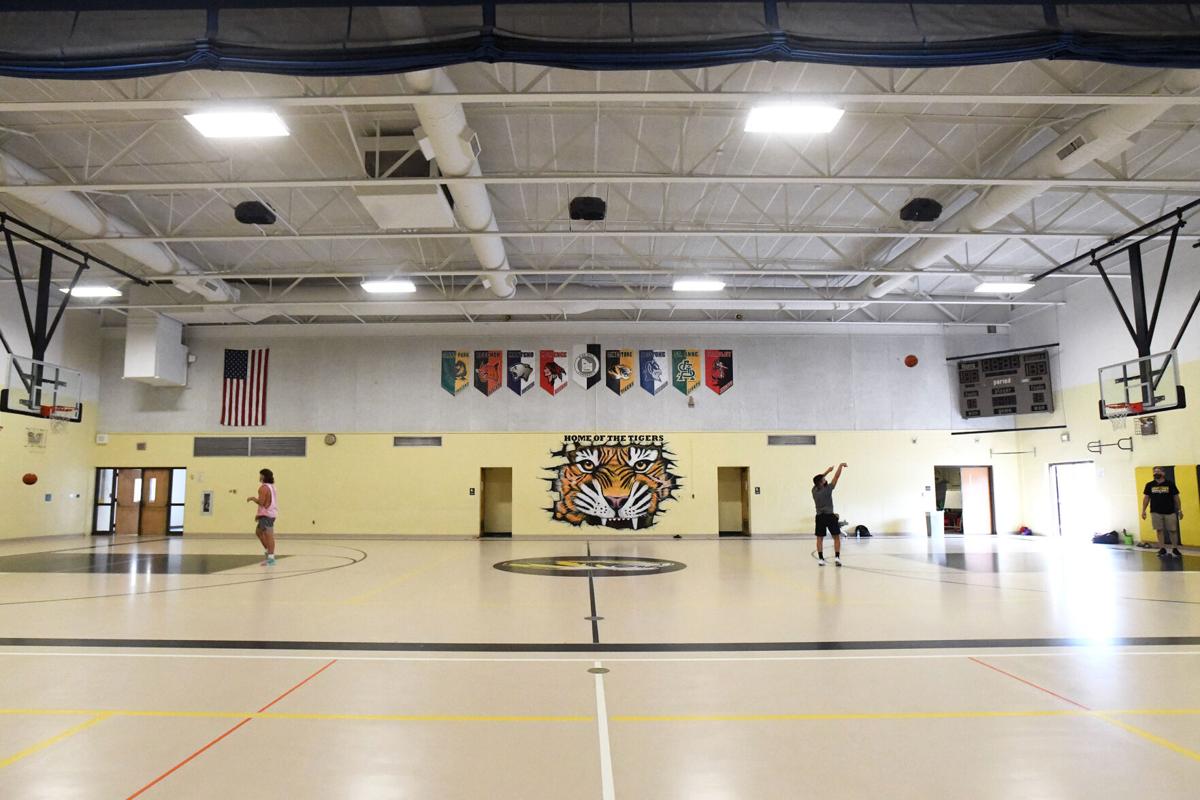 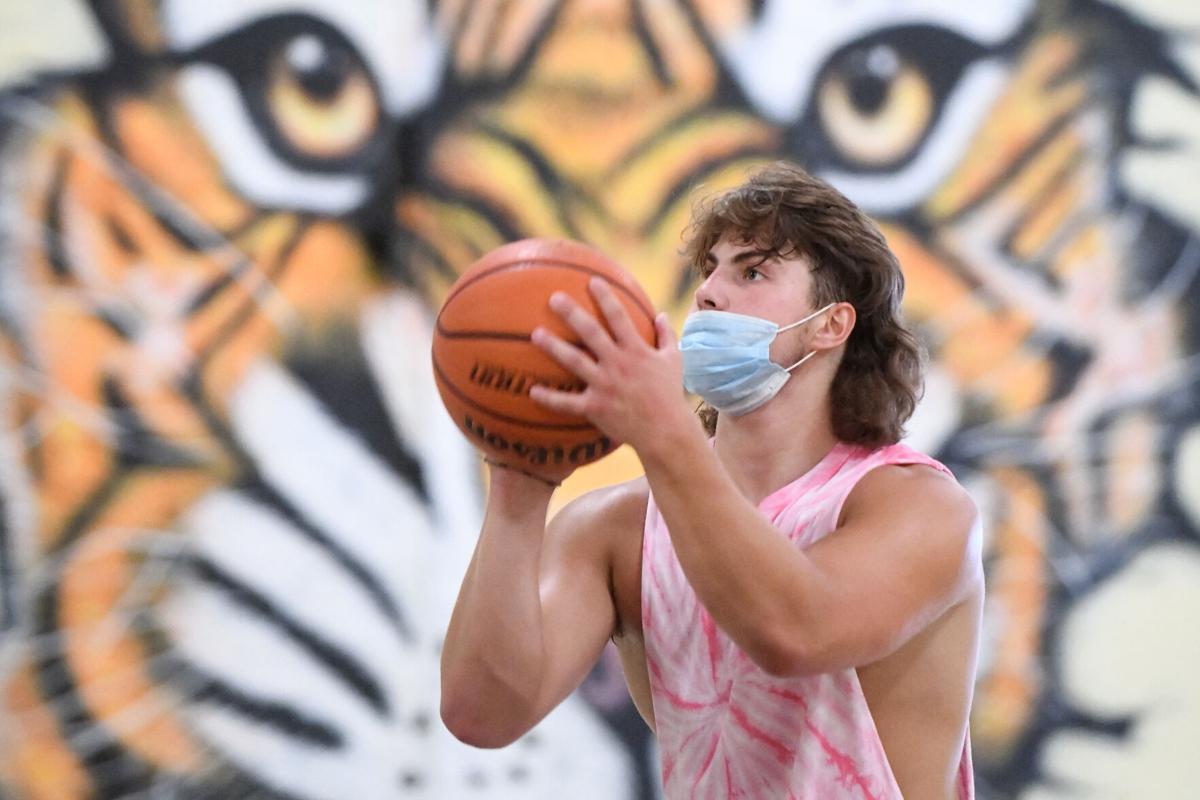 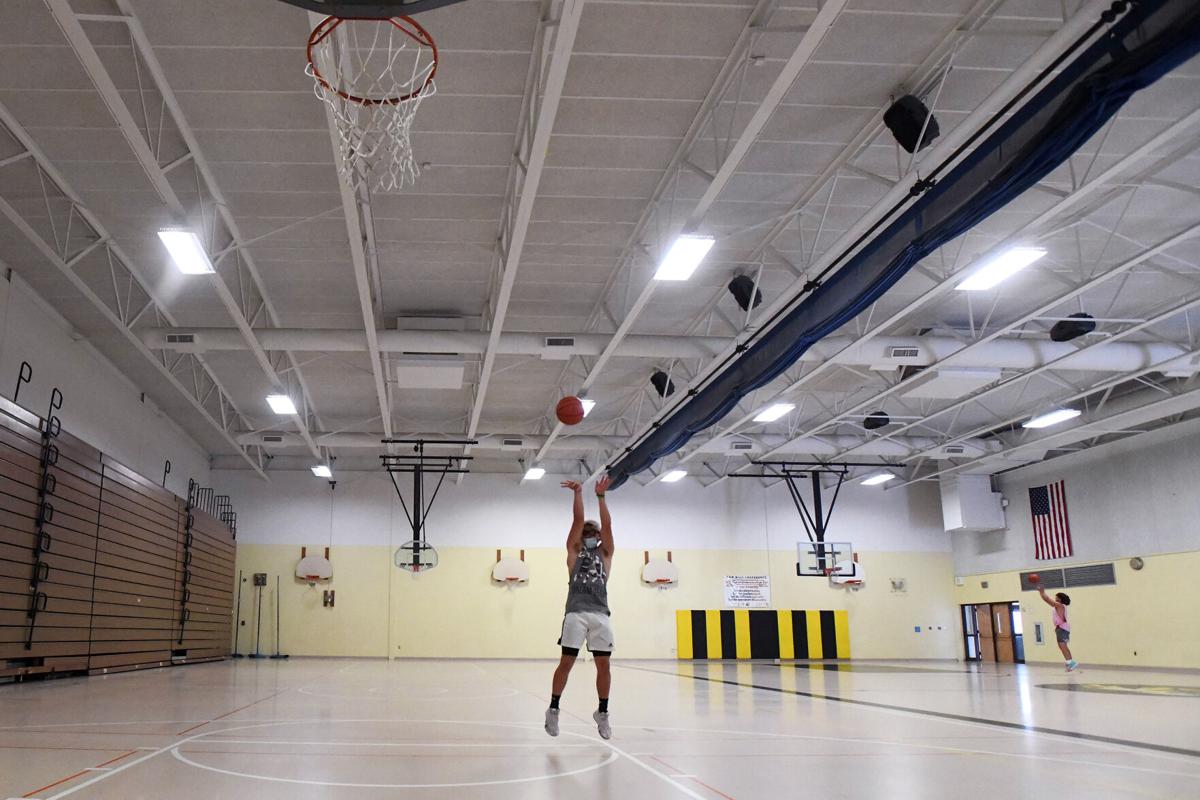 Herscher senior Logan Lunsford dons a mask during shooting practice Thursday morning at Limestone Middle School as his brother Cody, a junior, shoots at another basket across the gym. 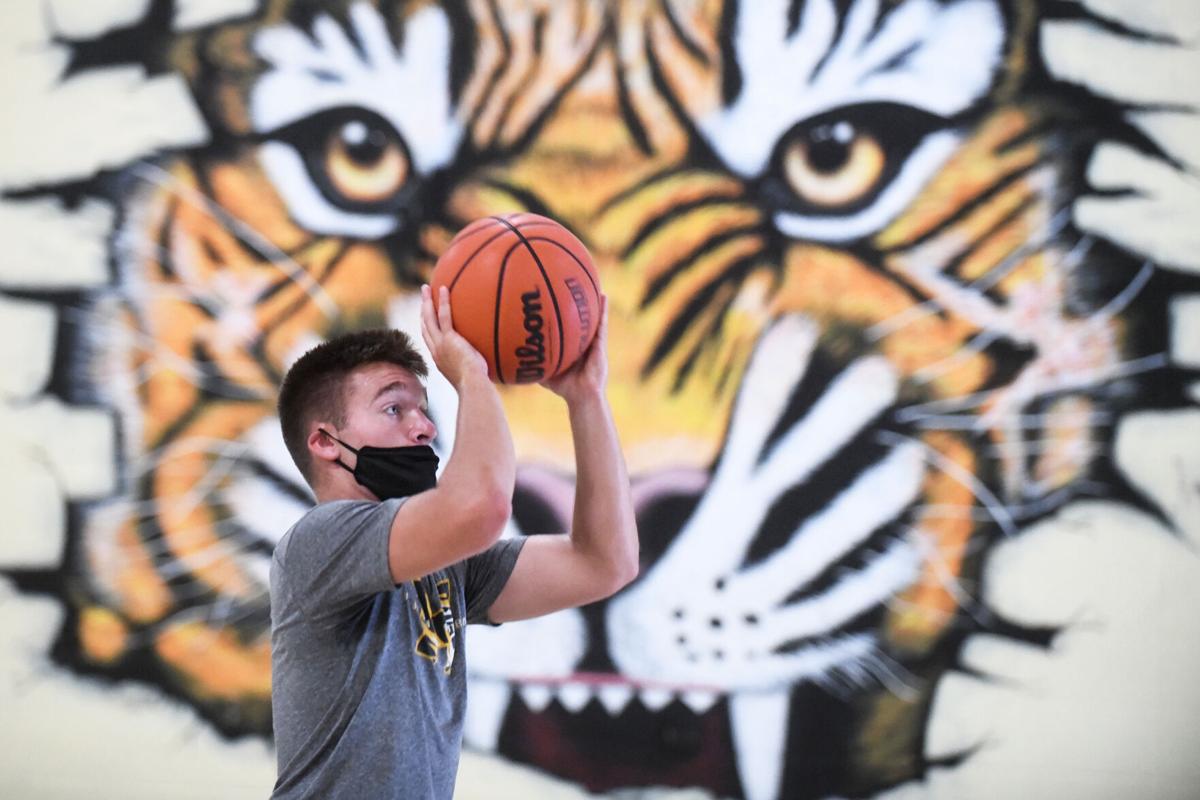 Herscher senior Logan Lunsford dons a mask during shooting practice Thursday morning at Limestone Middle School as his brother Cody, a junior, shoots at another basket across the gym.

Ten days ago, Herscher’s boys basketball team felt a semblance of normalcy. Sure, it was a sauna inside the Tigers’ gym on a stuffy, 90-plus degree day, but for the first time since last season ended, coach Ron Oloffson got to watch his kids play the game of basketball together.

“I just think in general, some of those things as a player you take for granted,” Oloffson said. “You had that one chance to play, and it was fun and I felt good for them. It was really nice.”

This week, the Tigers, like many of the state’s school athletic teams, had to once again readjust to updated guidelines from the Illinois High School Association, after contact was again removed from participation and face masks became a requirement while indoors.

“Things change so fast — one day you can play and the next day you have to wear a mask in the gym,” Oloffson said. “I understand it all and I believe it all, but it’s been a wild summer.”

On July 3, the IHSA was granted approval from the Illinois Department of Public Health to install their next phase of Return To Play Guidelines, which allowed for full contact and allowed participants to compete without masks, while coaches were still required to wear them. The updates were implemented less than a week later.

One of the most valuable lessons sports provide to their participants is the need to sometimes adjust on the fly, which is exactly what Watseka boys basketball coach Chad Cluver has been doing with his team over the past week and change.

“I told the guys that this whole wearing-masks-in-the-gym thing is new to me — I want them to communicate with me on how things go,” Cluver said. “You can’t really run, so we did some stationary ball handling and come to find out, some of that was harder than moving and shooting.”

Despite the difficulties and learning curves that have come with yet another set of guidelines to follow, Cluver has found a silver lining or two with what has come in the wake of the COVID-19 pandemic. He’s noticed a return to old times, where kids decide to get together and compete on their own time, while the lack of contact has also given teams more time to work on some of their sport’s basics.

“I think it’s something good to come out of it, that they learn to get together, build relationships and go to a guy’s house and play until the neighbors kick you out for being too loud,” Cluver said. “I think that’s been a good thing, as well as more of a focus on the fundamentals.”

Camden Berns, who plays football and baseball at Herscher in addition to serving in the backcourt for Oloffson on the hardwood, said that the transition to wearing a mask hasn’t provided much difficulty in the Tigers’ now-limited activity, but the lack of physical contact has delayed the team’s ability to consistently compete in full-court action.

“It’s been an adjustment to have to wear the face mask while shooting,” Berns said. “It’s more difficult to breathe and not getting to play some games during summer camp, we haven’t been able to play with the whole team and get the chemistry.

“[Wearing a mask] isn’t as bad as I thought it would be, but I haven’t really been running with one.”

Like Berns, Watseka’s Brayden Haines is a three-sport athlete in football, baseball and basketball. Between basketball and football, the two sports most schools are working most at in the summer, Haines said that despite the lack of contact, the new guidelines have given football a bit of a leg up as opposed to basketball.

“In football we can still go outside, run routes and work on stuff,” Haines said. “But basketball is tougher because you’re inside, have to have mask on and can’t play against other people.”

But the biggest aspect in football, perhaps more importantly on the gridiron than any other sport, is contact. But even before contact was granted and then taken away, Peotone football coach Tolly Tsiamas said that his team was just happy to be able to be together again when strength and conditioning sessions began to be allowed last month.

“I’ve never seen kids so happy to run sprints and lift weights,” Tsiamas said. “It’s usually the most boring part, but there was a special energy just to be around teammates, friends and coaches.”

The first day of legitimate fall practices are still currently scheduled to begin on Aug. 10 and by this point in the summer, football teams have usually had plenty of contact days and have gotten acclimated to football conditions.

“As far as install schedules and things with practice, it’s not really a top priority,” Tsiamas said. “I said from day one if i had a week to get the kids ready for a game we would.

“It’s just reinforced how much we need sports and how important they are, how they bring people together.”

In Watseka, the Venn diagram between football players and boys basketball is almost a complete circle. For Cluver and football coach Aaron Hilgendorf, a key component of returning to play is finding the proper balance and not overloading their student-athletes.

“They went from in March, not doing much besides on their own thing, to doing all this stuff,” Cluver said of his players. “When it was just strength and conditioning we did a good job bringing the kids up to speed, and the kids liked it and liked being around each other.

“We’ve added the lifting and a little basketball, but we don’t wanna burn them out, and football is coming up, so it’s a little more important for [football] than us.”

The newest update to the guidelines hasn’t stopped everyone from the more typical summer workout scene. At Kankakee, athletic director Ronnie Wilcox said that after much discussion and consideration, the school is allowing its participants to continue abiding by the original Phase 4 guidelines.

“We’re definitely excited to be back to some levels of normalcy with our coaches and athletes,” Wilcox said. “We decided after conversations as a district and with the IHSA that we were going to stick to the original Phase 4 guidelines.

“We may be doing something a little different, but we continue to follow all of the safety guidelines and protocols. The attendance has been great and we’re hopeful that we’ll have sports in the fall.”

Kankakee Superintendent Genevra Walters echoed her thoughts from earlier this week that a balance of adjusting to the virus and returning to normalcy has to be considered.

“I think we need to try to figure out how we can get to as close to normal with the least amount of risk,” Walters said. “Athletes have to take physicals on a yearly basis and don’t have any obvious underlying conditions, and I say obvious because you never know for sure.

“I understand they can take it back home to their family members who may be at risk, but I think that’s when you look at the facts and let families choose.”

Cluver said that at Watseka, the idea of returning to normalcy, as well as learning from the situation, have been important sticking points.

“I think even more so kids and teachers will be really important, teaching kids how to handle adversity the right way,” Cluver said. “This stinks, but how can we learn and grow from it? That’s something we’re trying to do with the kids at Watseka, trying to stay hopeful and positive that we can move in the right direction back to normalcy, whatever that may be.”

The debate on what exactly will be the new norm, and when that will come, is a topic that will grow steam as the end of July approaches and turns into the beginning of August. Earlier this week, the IHSA deferred any future decisions to the Illinois Department of Public Health, Illinois State Board of Education and the Governor’s Office.

For coaches like Oloffson, the hope is that any future decisions regarding the next step in sports’ return comes with proper consideration.

“I just hope we can take the politics out of this thing and listen to what the science tells us,” Oloffson said. “If they tell us it’s safe to move on, great, and if they say it’s not safe to go in a certain direction, then we listen to those guys.

“That’s why they are who they are. It’s so uncertain and we’ve gotta go with what the experts say.”

Schweizer: Balancing responsibility and the desire for normalcy in the return to sports

We all want to see sports return, especially at the local level, but with that desire must come a sense of responsibility.

IHSA to defer to other agencies on Return To Play Guidelines

The IHSA will take a back seat in decisions moving forward.

The IHSA Board of Directors meeting scheduled for Wednesday has been delayed a week to allow time for the board to further discuss options on returning to play.