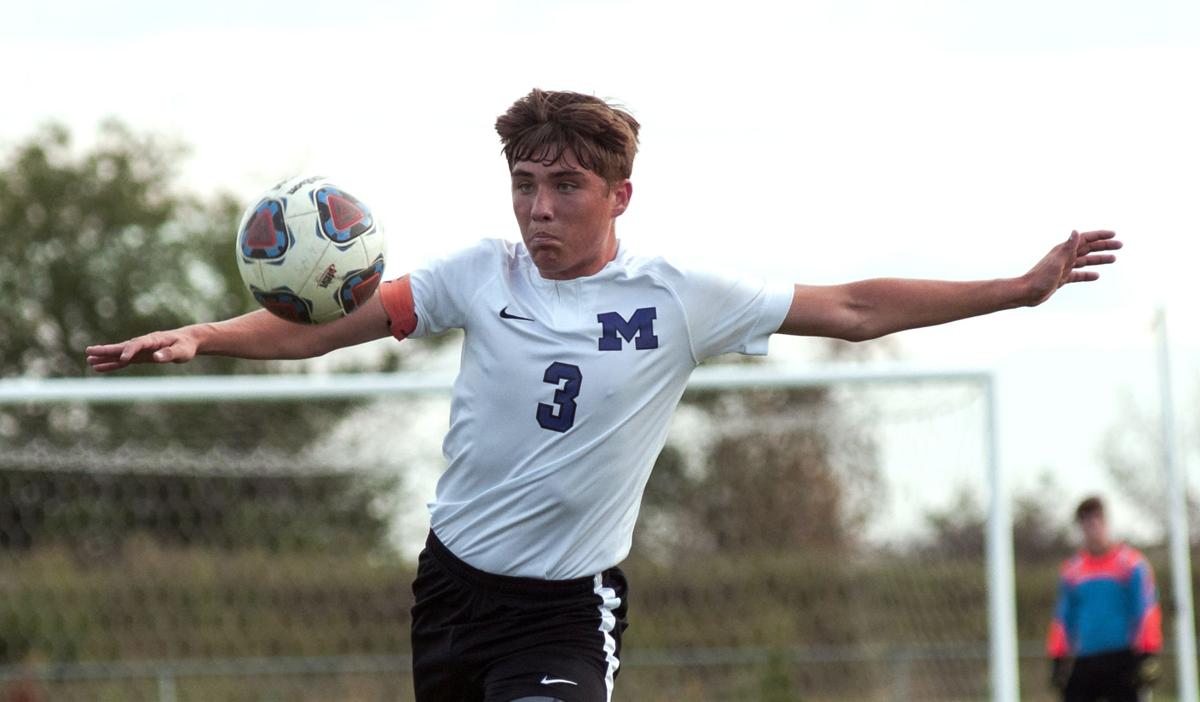 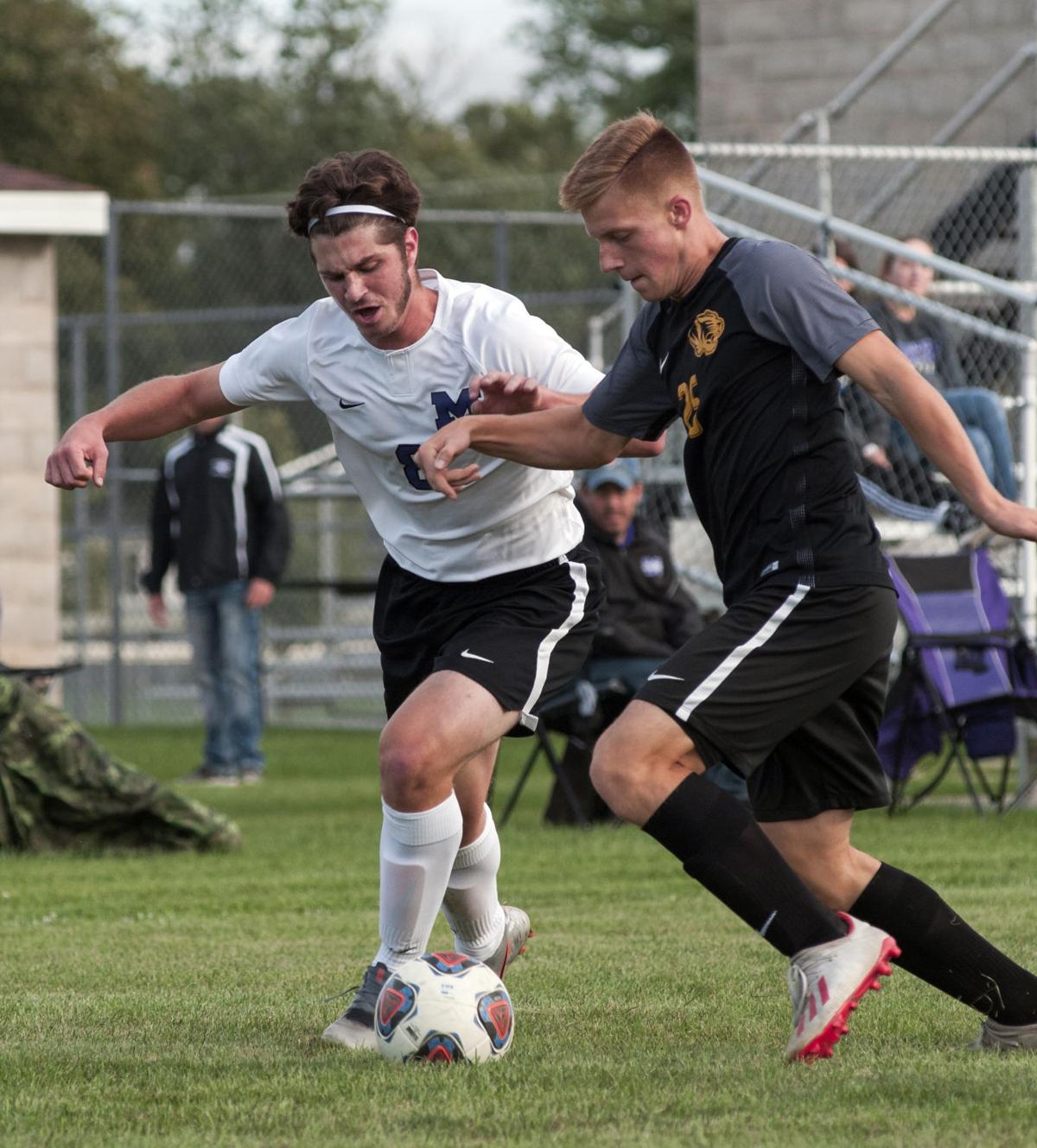 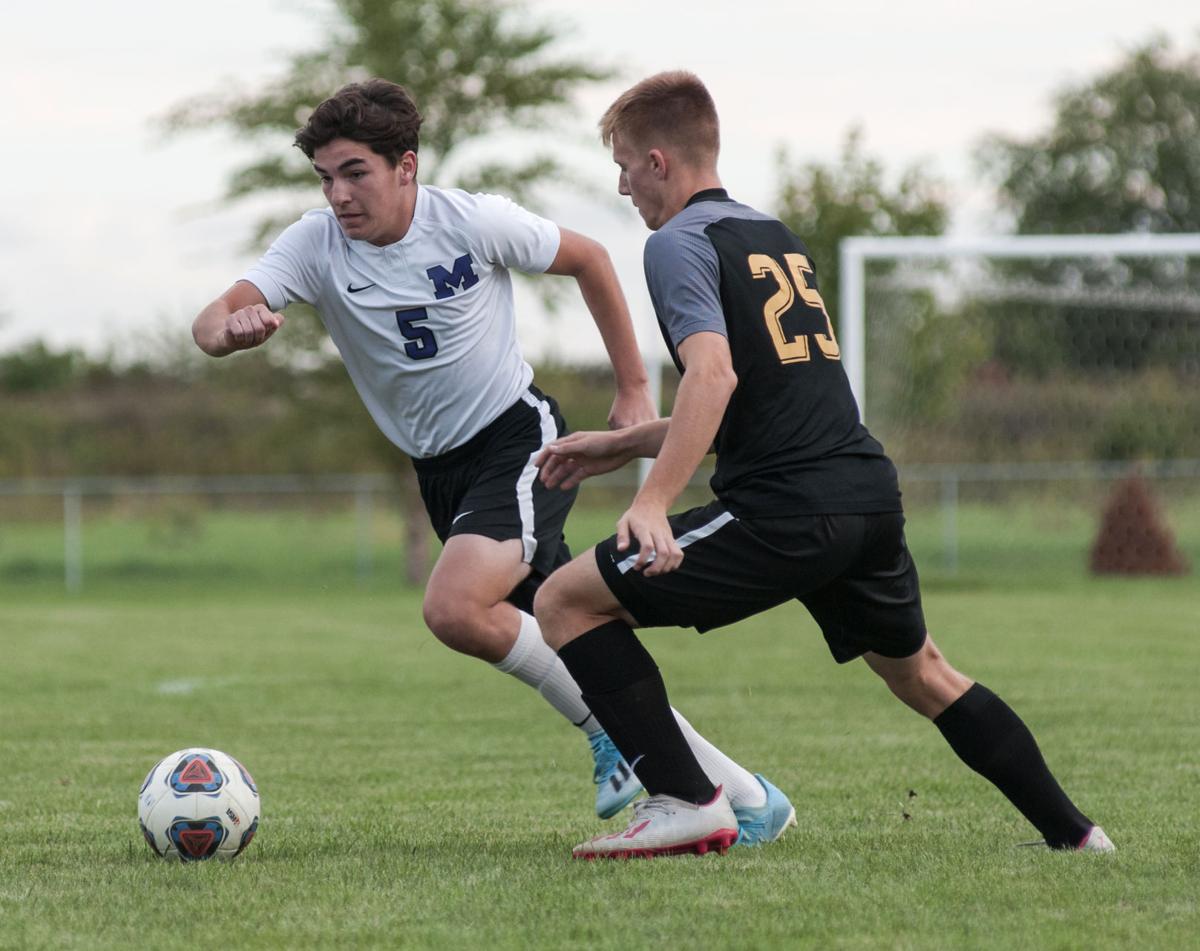 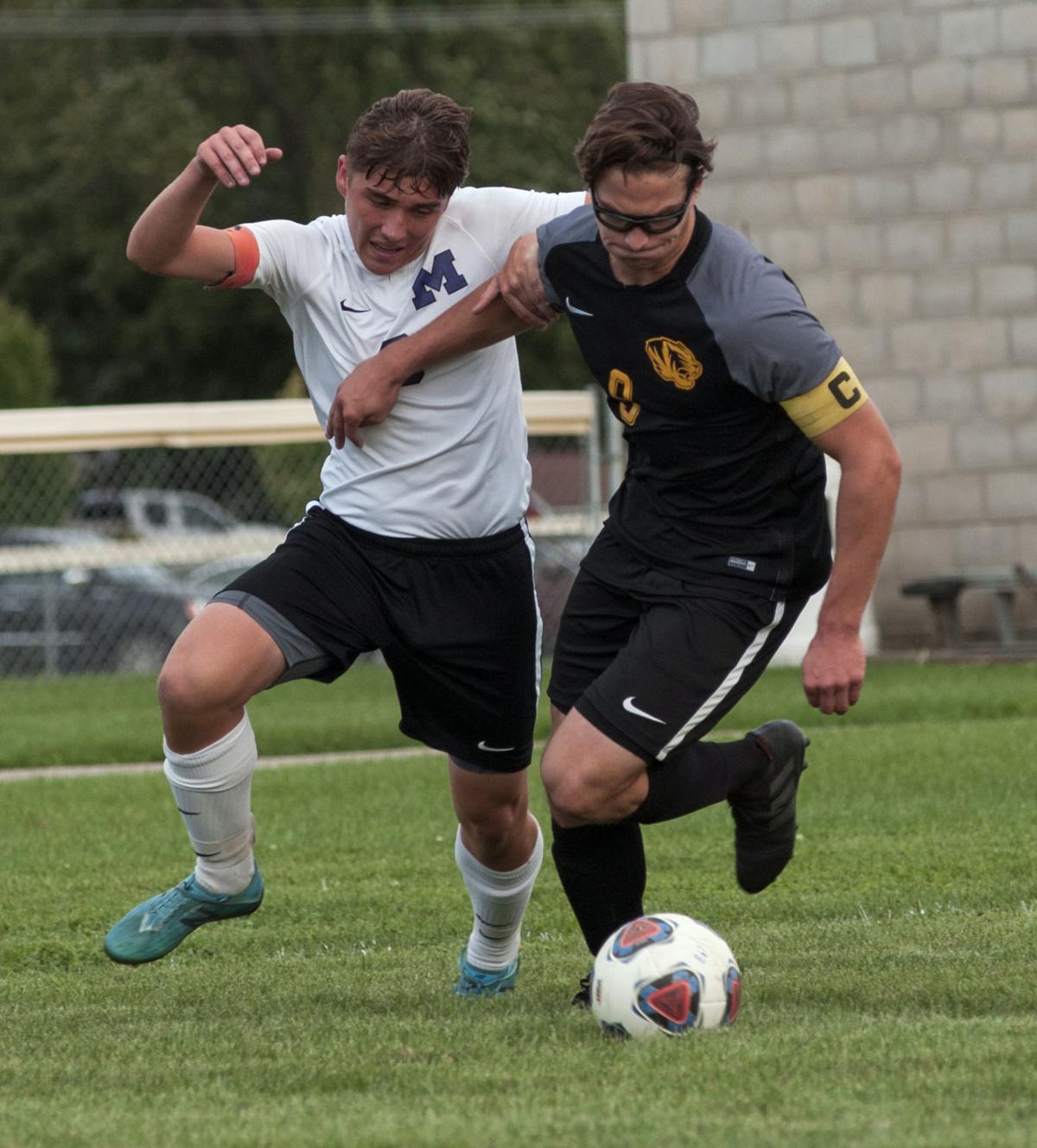 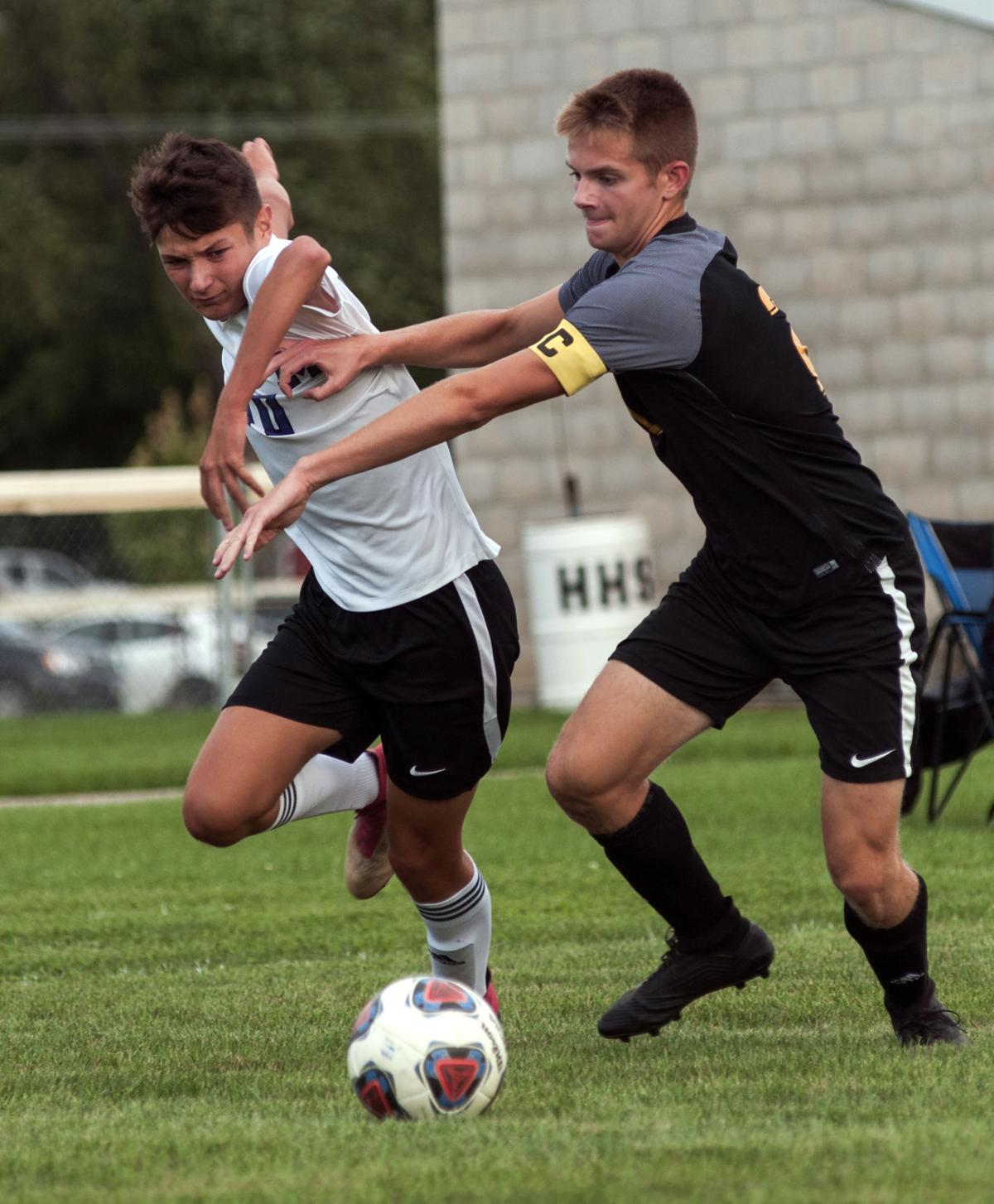 Manteno High School's Ion Barrio, left, and Herscher High School's Mason Robinson, right, vie for control of the ball during Thursday's match in Herscher. Barrio was fouled on the play. 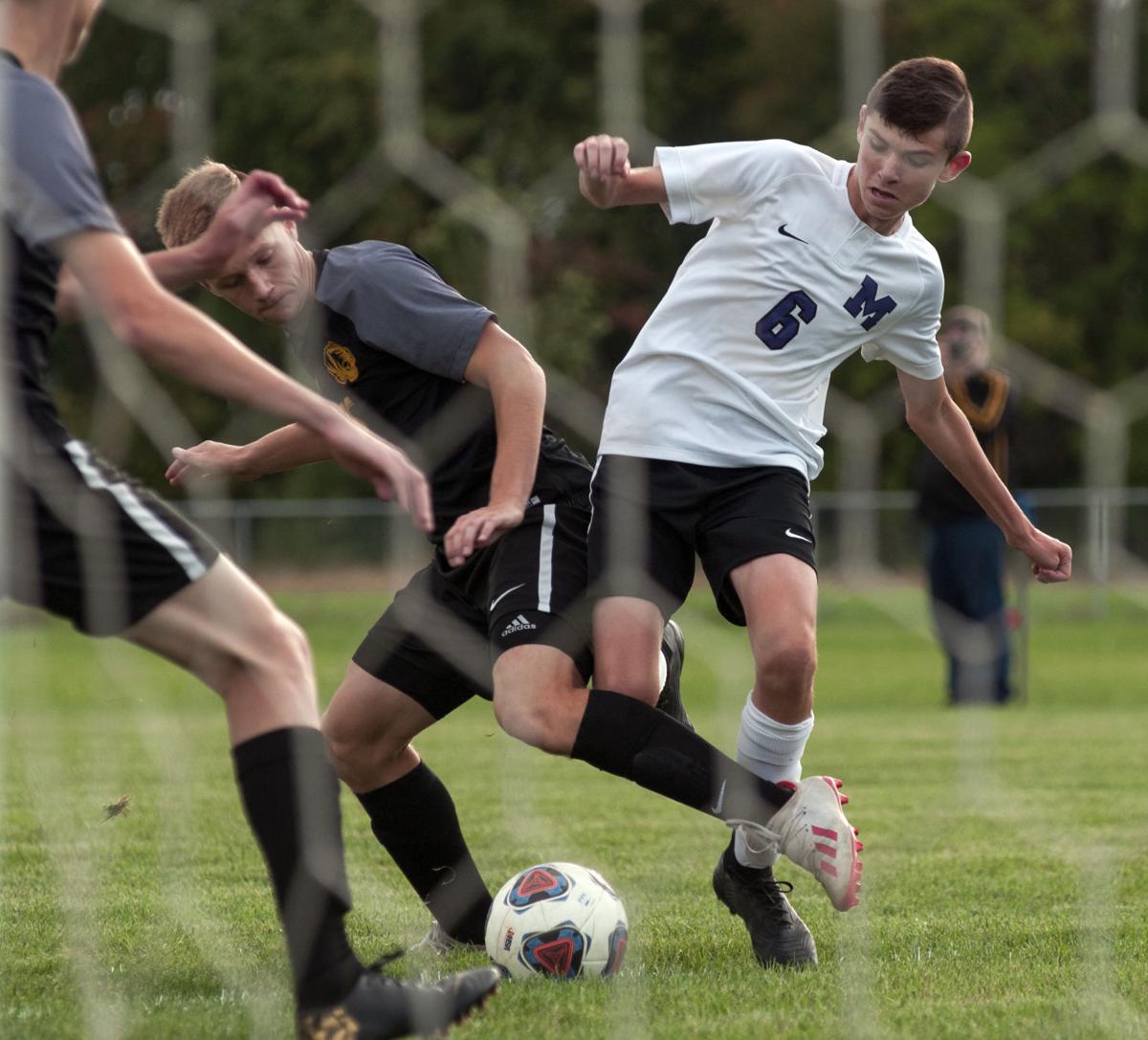 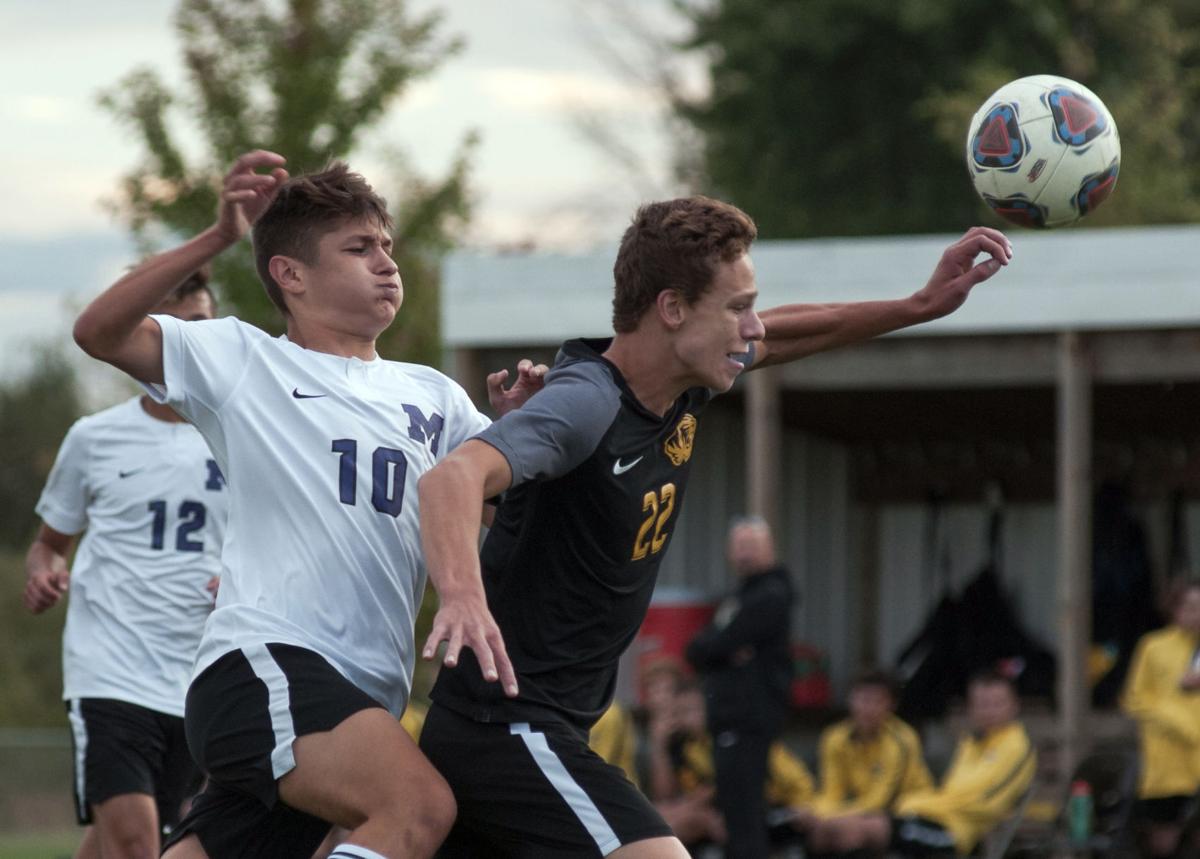 Manteno's Ion Barrio (10) and Herscher's Drew Schmidt get tripped up while playing the ball during Thursday's match in Herscher. The Tigers won 7-6.

Manteno High School's Ion Barrio, left, and Herscher High School's Mason Robinson, right, vie for control of the ball during Thursday's match in Herscher. Barrio was fouled on the play.

Manteno's Ion Barrio (10) and Herscher's Drew Schmidt get tripped up while playing the ball during Thursday's match in Herscher. The Tigers won 7-6.

HERSCHER — It likely came to nobody’s surprise that Thursday’s matchup between Interstate Eight-turned-Illinois Central Eight arch rivals Manteno and Herscher couldn’t be decided in regulation when the two teams met in Herscher Thursday.

After a deadlocked score of 1-1 after 80 minutes of play, the Tigers and Panthers went into a penalty kick shootout, where the Tigers earned a 7-6 edge to pick up a pivotal conference win Thursday night in one of the area’s most highly anticipated matchups, as senior Milford Nelson buried the game-winning shootout kick for the Tigers to seal the win.

“I’m going to be honest, I was terrified,” Nelson said. “I’ve never really been in that situation before, but it was fun to be in that position and pull through for my team.”

Jace Martin drew a penalty kick five minutes into the game, setting up Trey Schwarzkopf’s goal to give the Tigers the early 1-0 lead. Manteno bounced back when captain Alec Miller assisted on sophomore Drew St. Aubin’s goal to tie the game at 1-1 29 minutes into the first half.

Both teams battled hard without a goal in the second half thanks to prominent two-way defense and physical play.

“Both teams played their hearts out,” High said. “So I wasn’t surprised the game was tied at the end of regulation.”

Holohan even stepped out of goal and buried a goal to tie the shootout at six.

“That was my first time ever taking a kick like that in high school,” Holohan said. “I’ve wanted to do it for a while, though. We had a shootout earlier in the season, and I was No. 5, but it never made it that far. So I was excited about the opportunity.”

High said there was no denying Holohan’s kick.

“That was a big-league strike right there,” he added. “Even if the goalie had guessed correctly and caught the ball, I think it would have carried him into the net. That’s how hard he kicked that ball.”

On Herscher’s next attempt, Nelson found the back of the net to end the marathon match.

“We didn’t hesitate to put (Nelson) out there one bit,” High said. “He stepped up with the game on the line and delivered for us. The kid just has ice in his veins. I don’t know what I’d do without him.”

Holohan said that beating the Panthers is extra special considering how great of a team they are.

“Manteno is probably our biggest rival, so this win means a lot,” Holohan said. “The game going this distance shows how equal both of our teams are. I wouldn’t be surprised if we see them again in the playoffs.”

High also brought up the realization that these two teams could bump heads again in the postseason.

“I was talking to (Manteno coach Justin) Emerson after the game and I told him that the next time we see each other, we may be playing for some hardware,” High said.

Now that the Tigers own the head to head tiebreaker over the Panthers, Herscher now is just two ICE wins away from a conference championship. Only a road matchup at Streator and a match against Wilmington stand in the Tigers’ way.

The Tigers are back in action Saturday morning at 10 a.m. with a nonconference home meeting against Beecher. The Panthers are off until Sunday, Oct. 13, when they take on Newark in the PepsiCo Showdown championship at 10:30 a.m. at the Lyons Soccer Complex in LaGrange.